We made it to MOAB, where we had scammed a spot as a result of a cancellation.

It seems that there is this thing called “The Moab Easter Jeep Safari” every year. Who knew? The “Jeepers” occupied every single camping spot in the area – thousands of them. The whole collection of vehicles and Drivers reminded us of our recent Sturgis experience: Lots of otherwise respectable folks gather in large crowds to make noise and dust and drink heavily afterwards. Except Moab’s festivities had more wheels and less leather.

Ever had that thing happen where you try to open your car door in a parking lot, then realize it’s not your car, but one just like it? Well THAT NEVER HAPPENED TO US in MOAB.

As with Sturgis, we just tried to stay out of the way. This meant doing our Park visits early in the day (when the Jeepers are still regretting some of their previous day’s decisions). It also meant going to places like the Moab Brewing Company for LUNCH instead of dinner.

There we learned some more about UTAH LIQUOR WEIRDNESS!!

We were reviewing the beer options, and as we often do, conversation came around to Flights. The Conversation went like this:

Liz to the Waitron: “Do you do Flites?”
Waitron: “NO, In Utah you are only allowed two drinks in front of you at a time…so we cannot do flites”

Liz and I look at each other incredulously for a minute.

Waitron, breaking the uncomfortable silence: “We do have Sample Sizes…”
Liz: “So I can order two ‘Samples’…”
Waitron: “Yes…two at a time”
Dan: “So if we order two, and then two more, we could call that a ‘Utah Flite’”
Waitron: “Yes…as long as the first two are GONE before I bring the rest…”
Dan: “That will be NO PROBLEM at all!”

We spent altogether 10 days in Moab, and with two parks (Arches and Canyonlands National Parks) within close proximity, basically alternated between them. We also alternated Scenic-Drive days with Hiking days. As we have mentioned before, all the parks we have been to in Utah are DROP-DEAD-GORGEOUS, but in VERY different ways.

Arches is about, well, “Arches.” Rock formations formed by erosion over many eons. Many Hikes and a couple scenic drives. Arches is also CLOSED each day well before noon – the Park Service tries to meter inbound folks to prevent serious traffic jams and overcrowding. No problem for us – we were ALWAYS at the gate by 8:00 AM, but on the way out, there would be a lot of disappointed folks who chose to sleep in. Apparently the gates sometimes reopen later in the day as the early-risers exit. People do wait. Too many beautiful views and hikes to describe, so I’ll just put a few of our pics here. 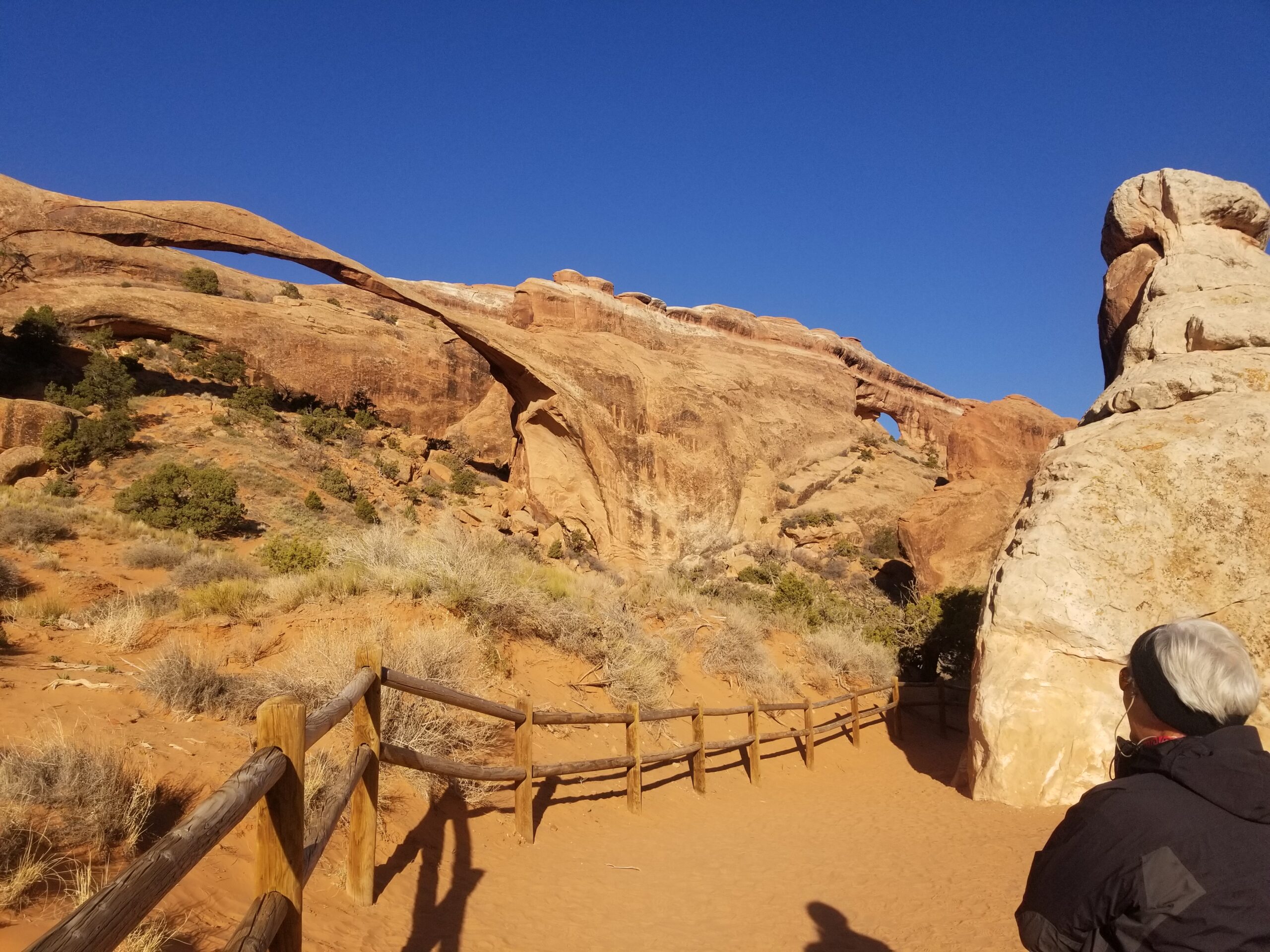 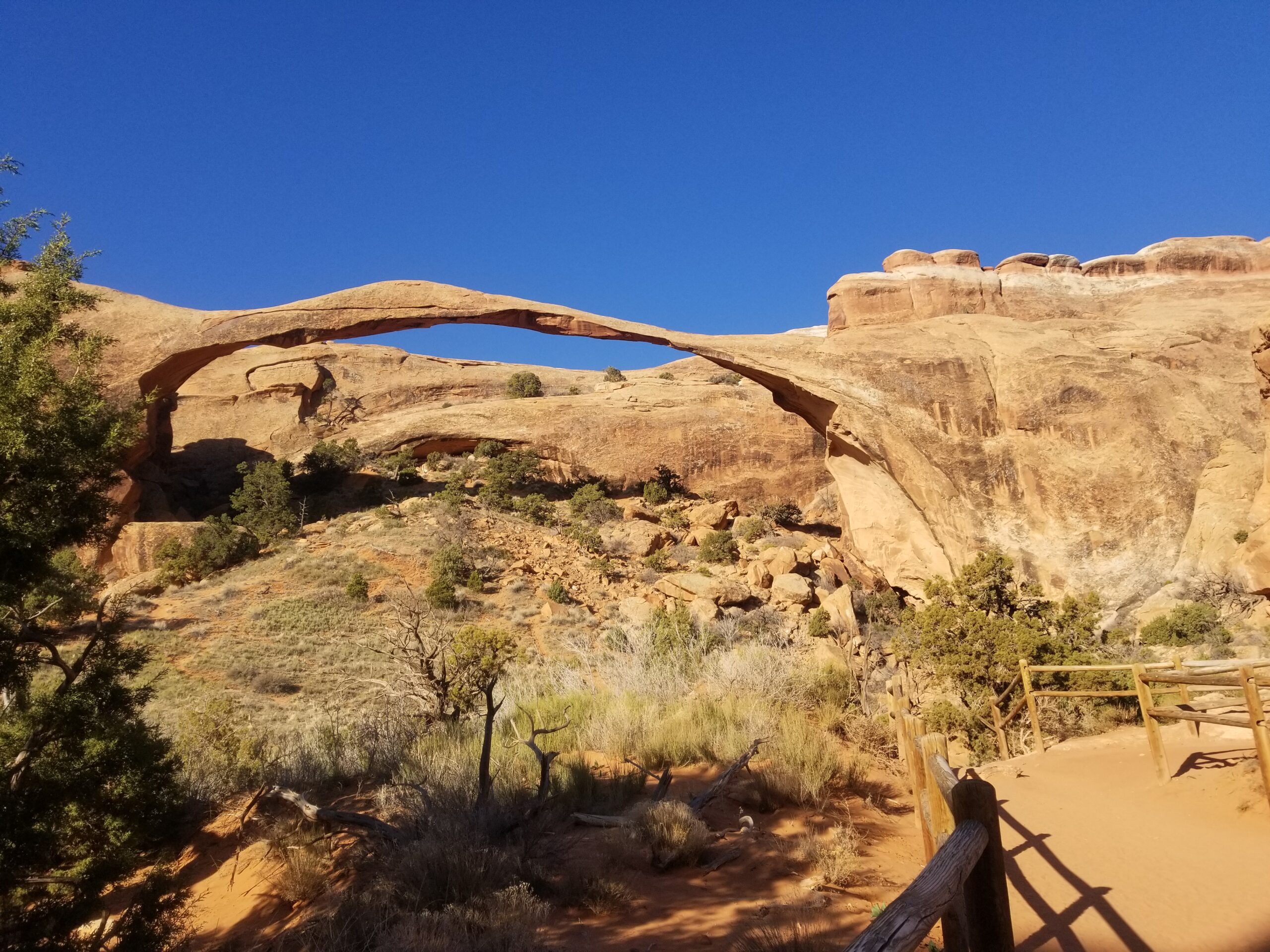 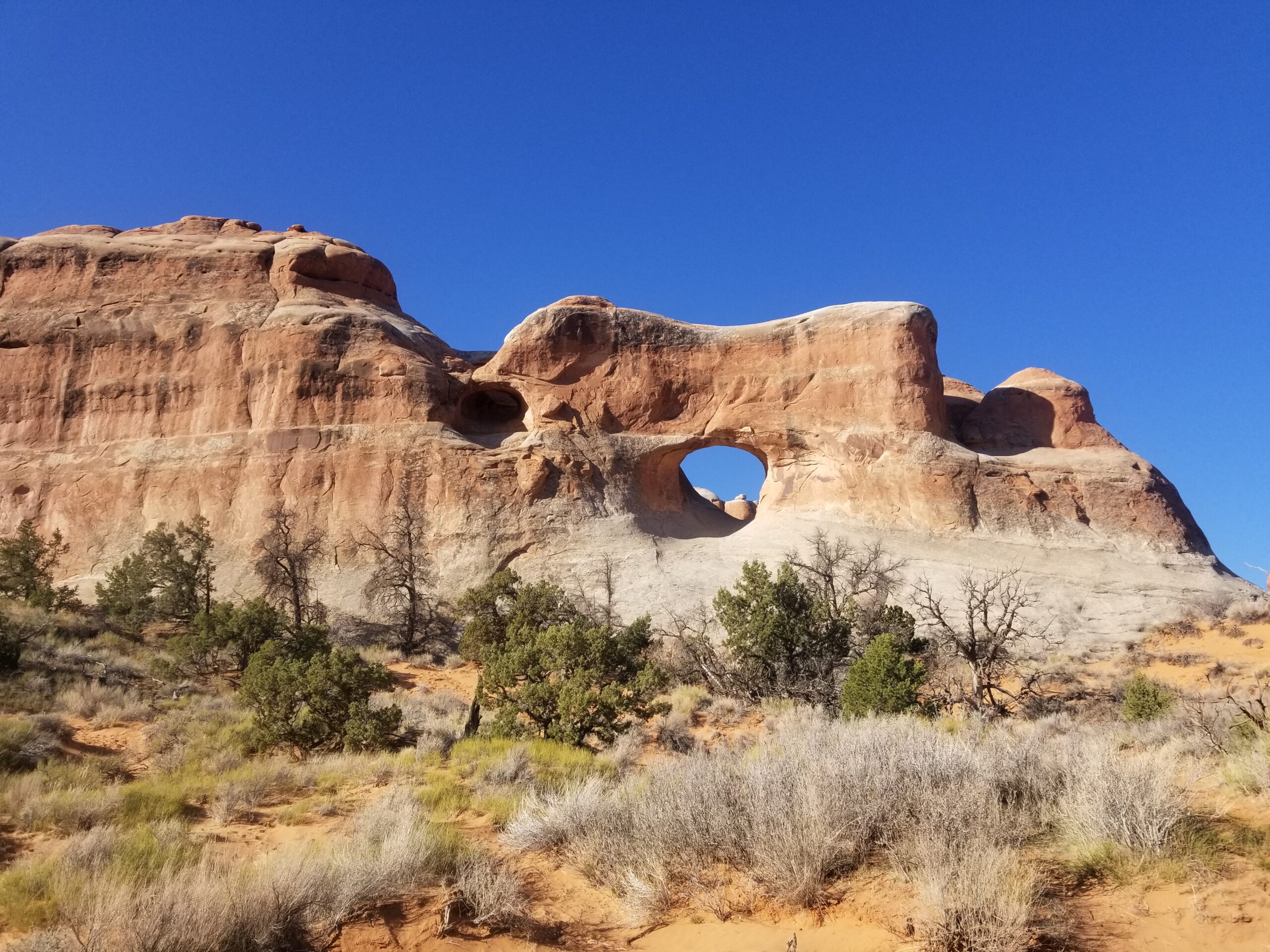 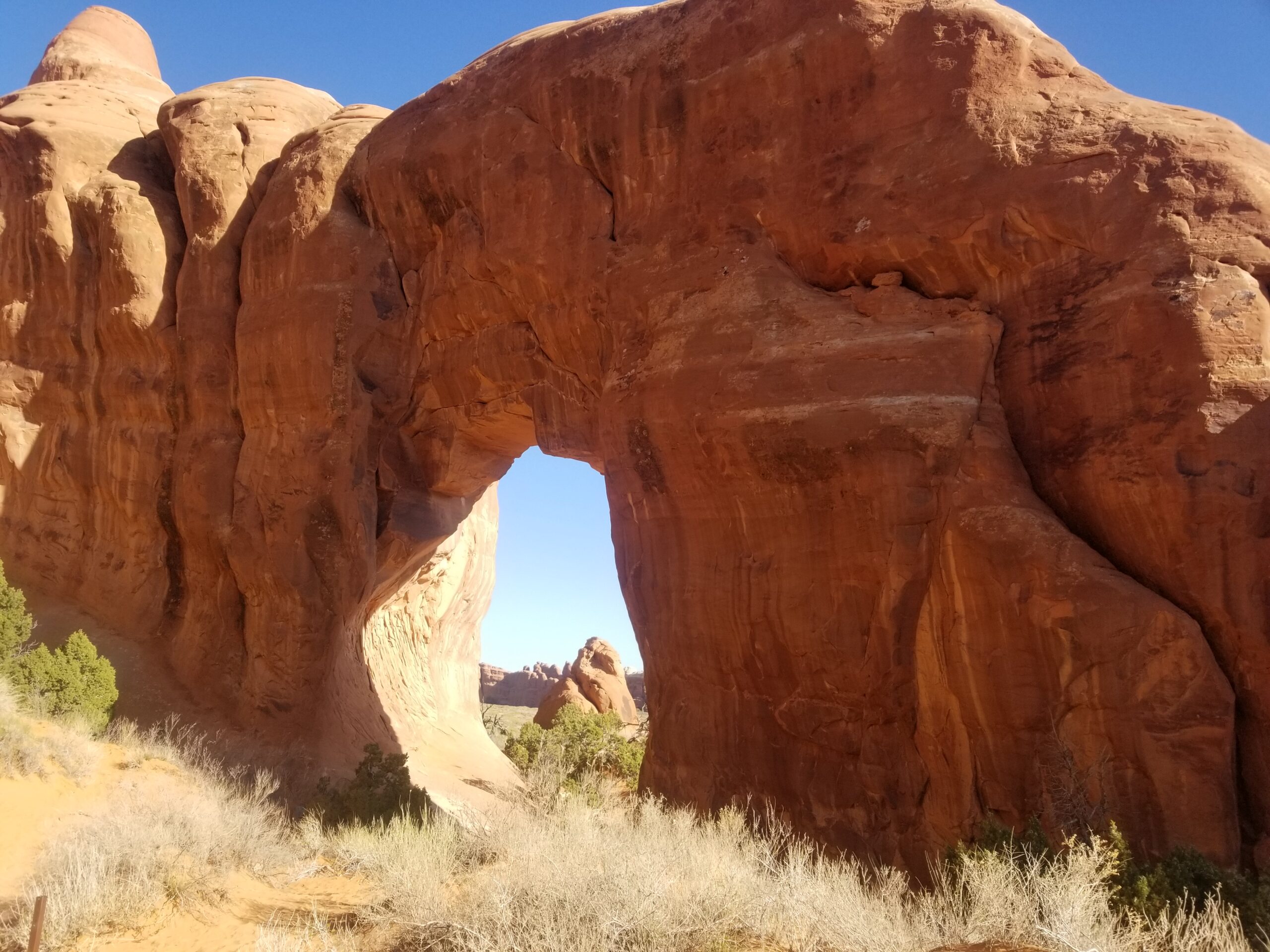 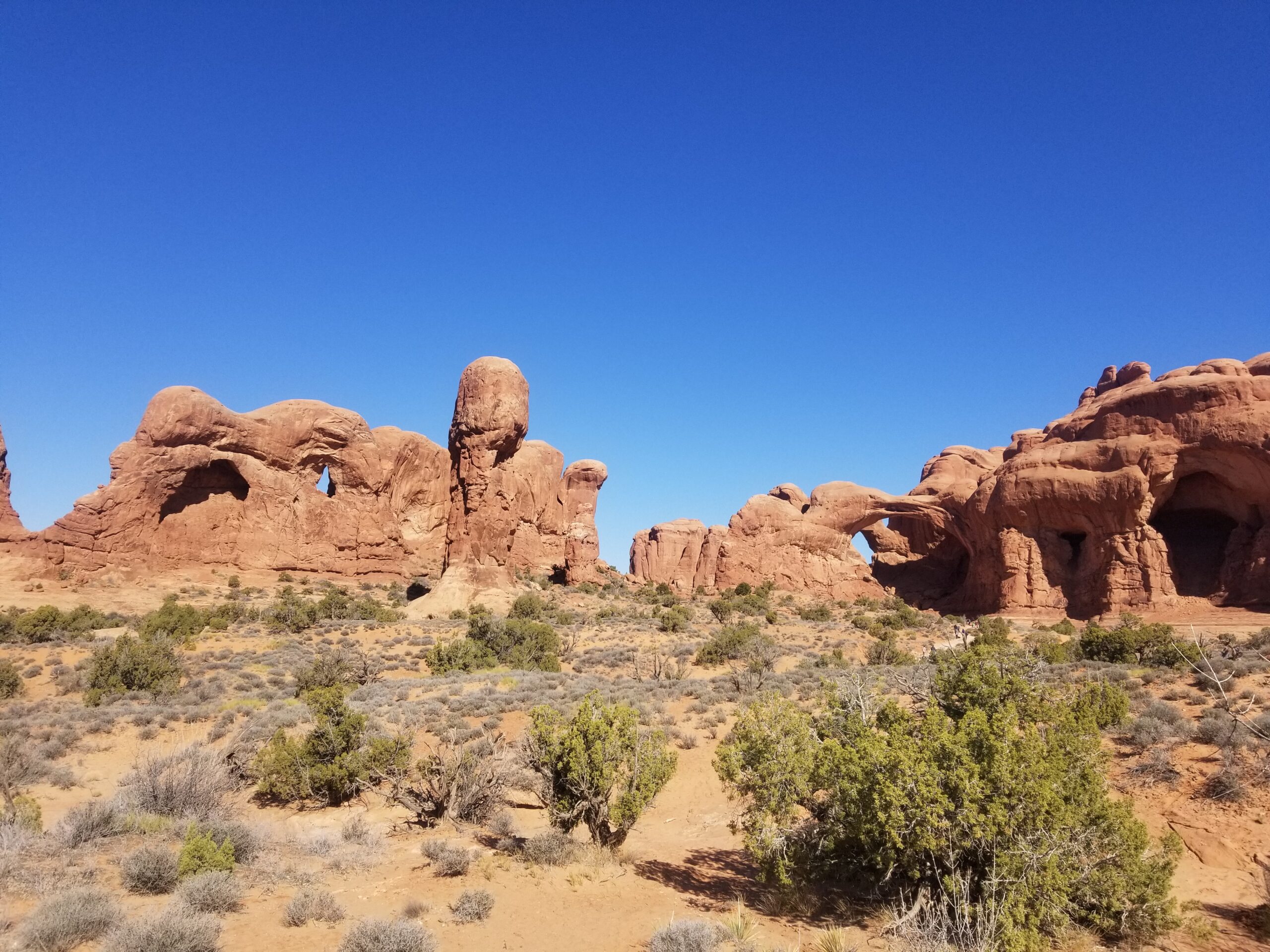 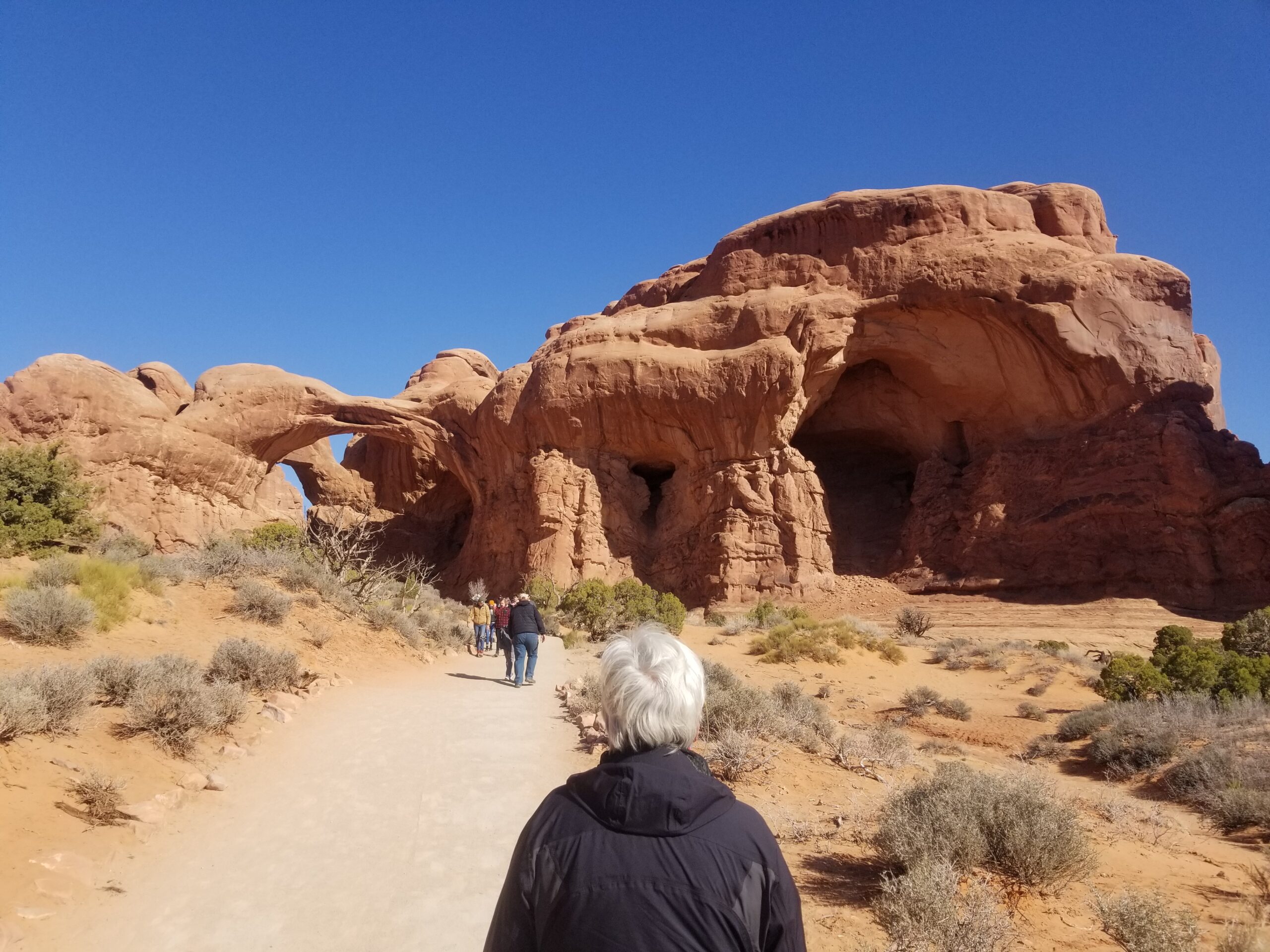 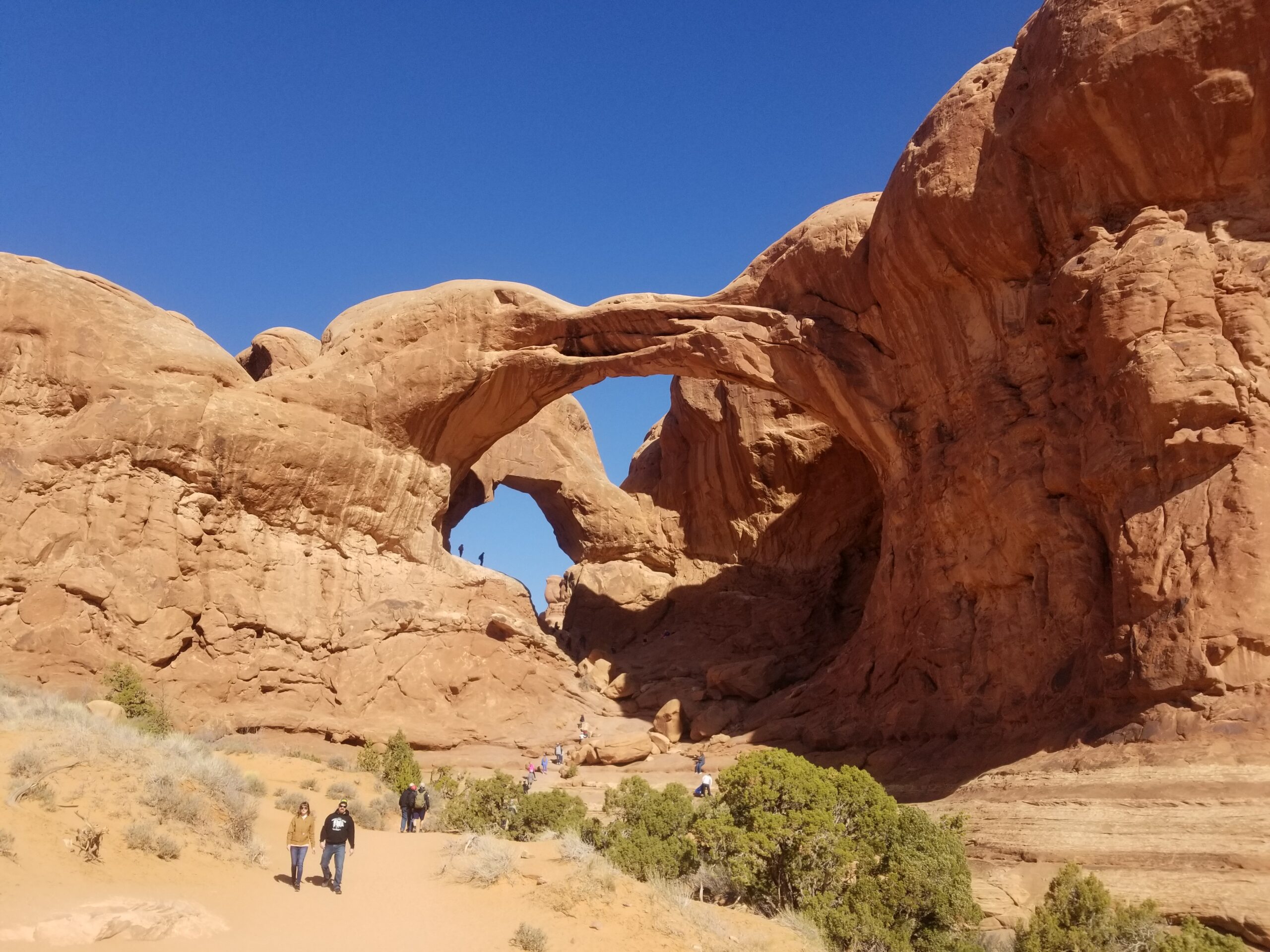 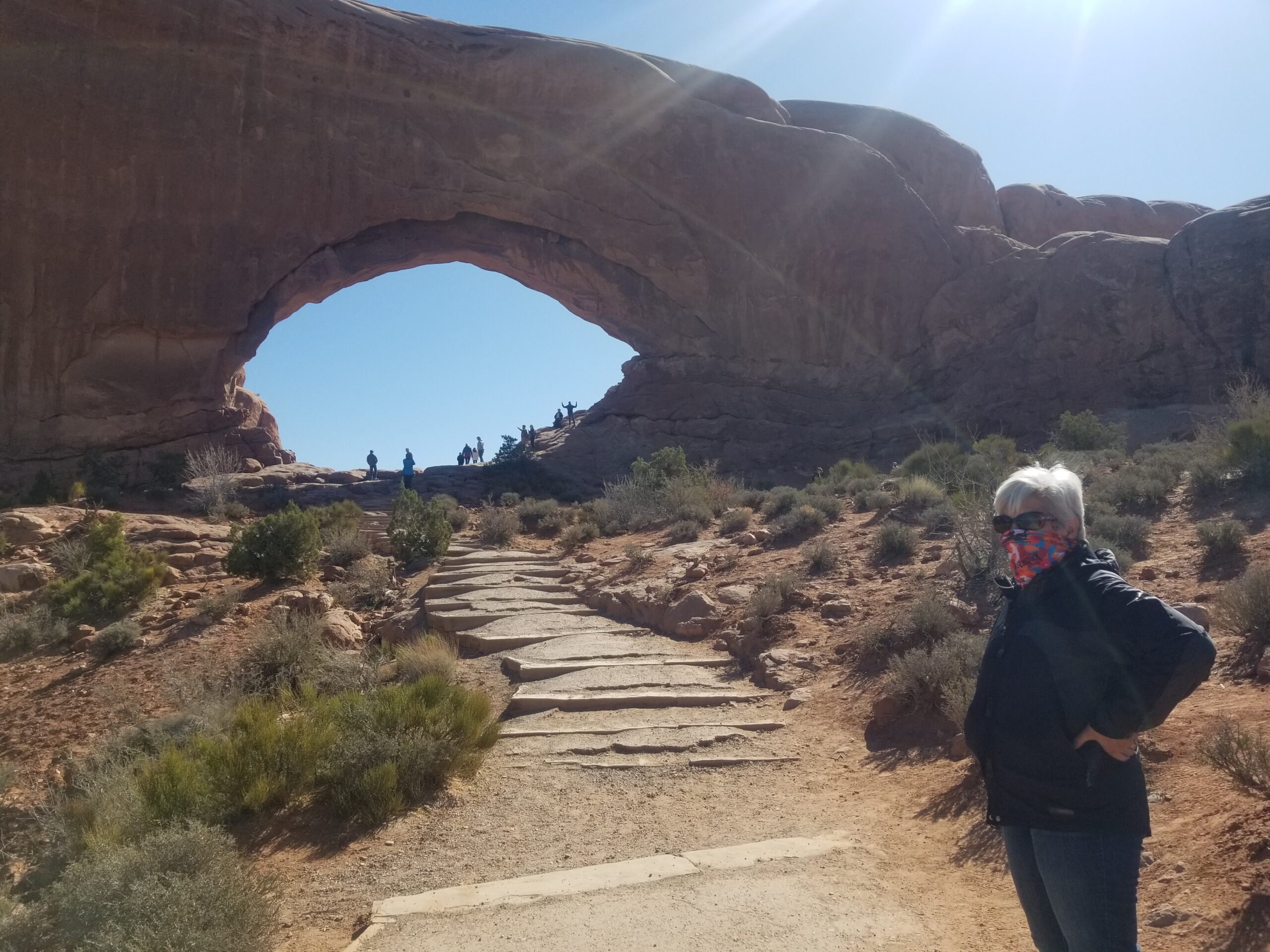 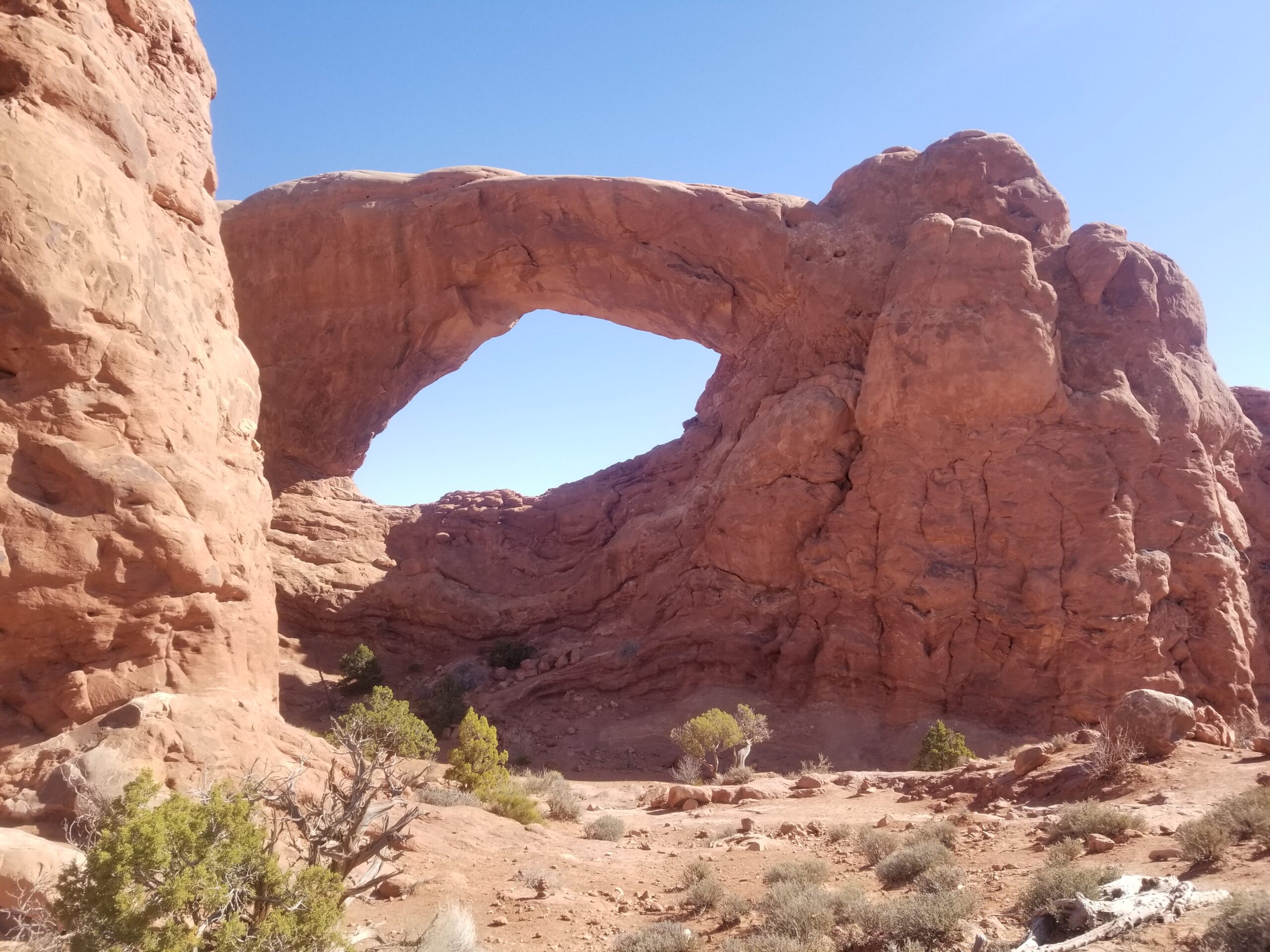 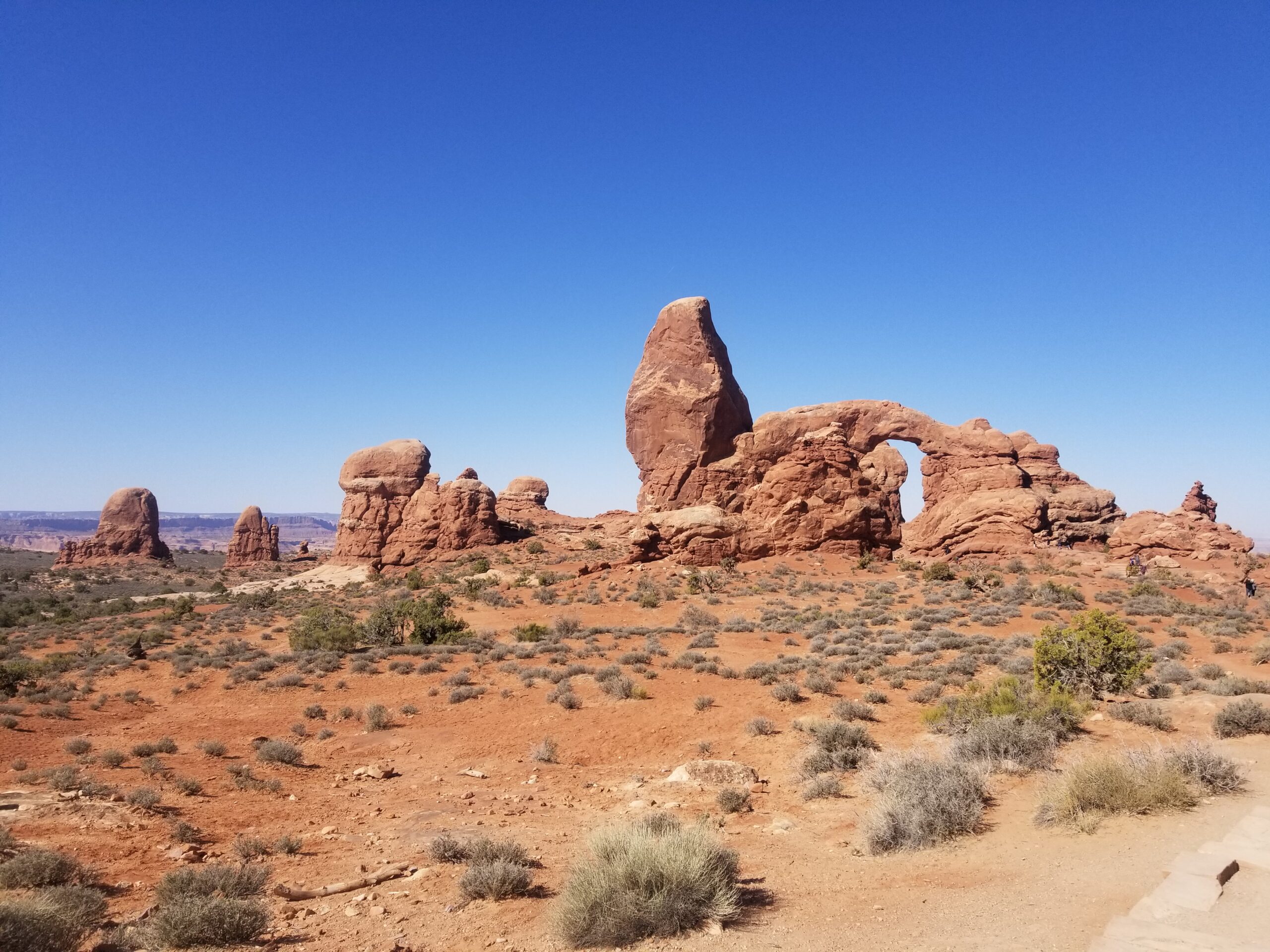 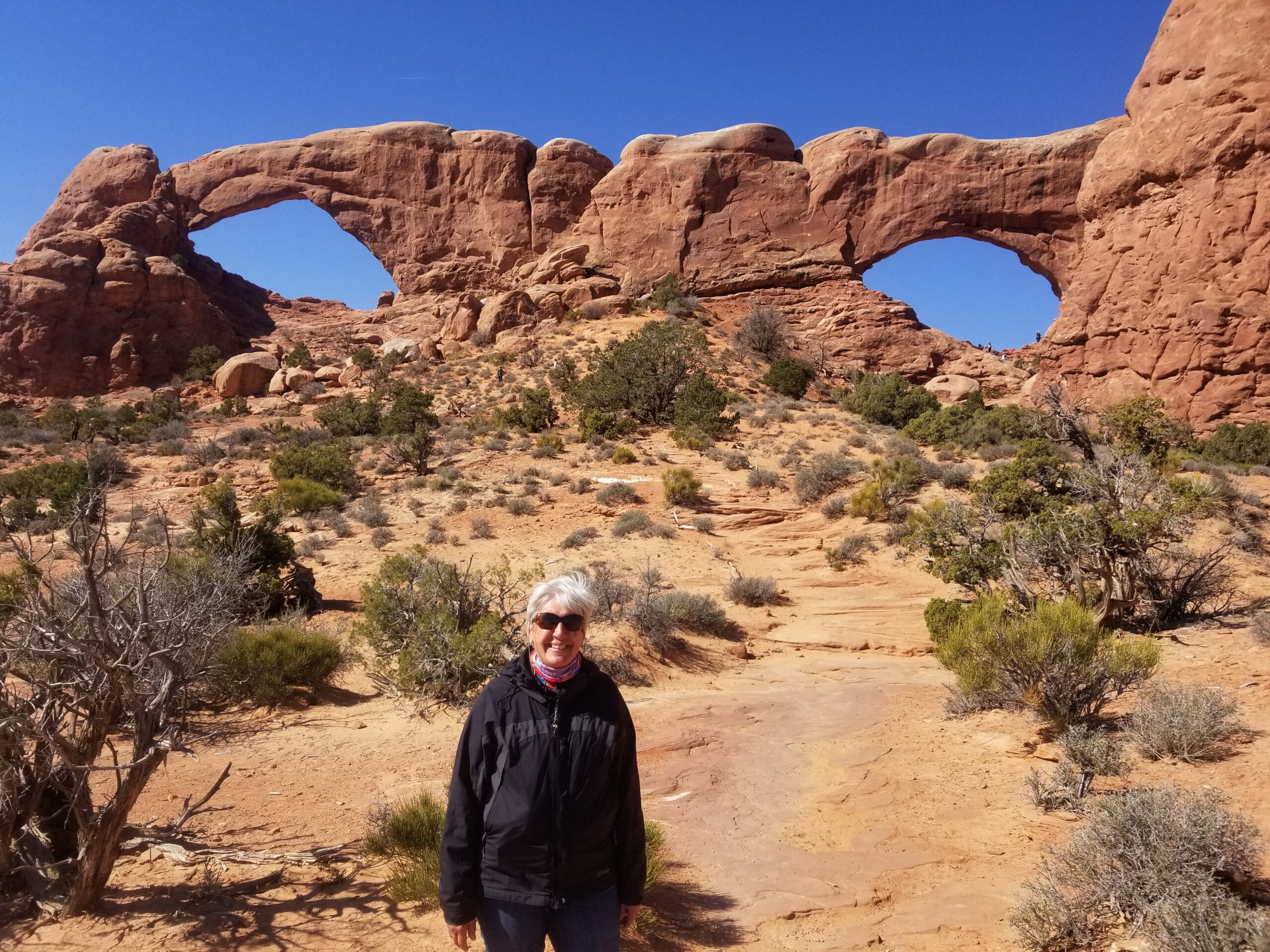 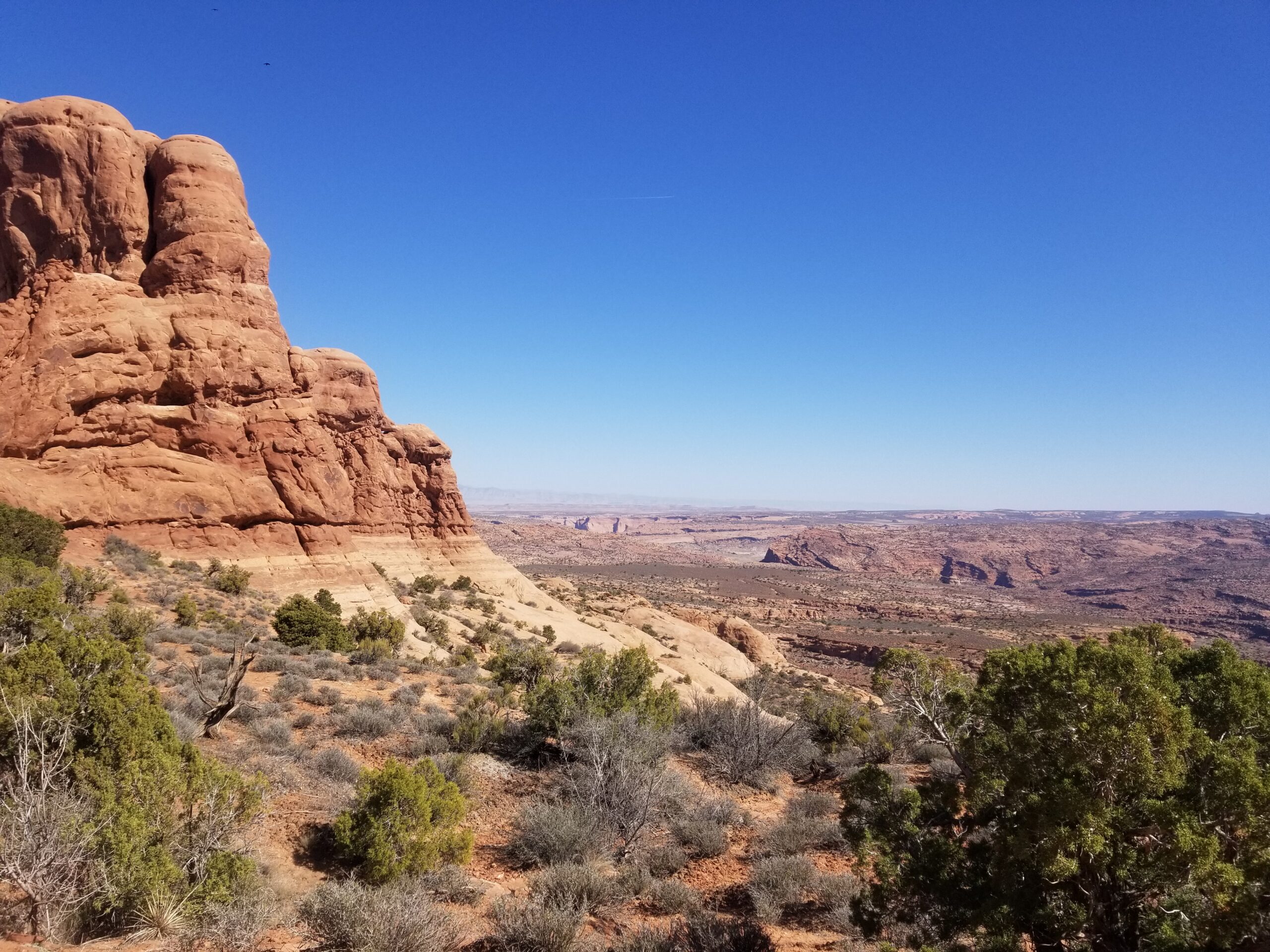 Canyonlands is an entirely different place. Wide, expansive views of an immense canyon carved by two rivers – the Green and Colorado that join in the park. Not as many people there (the park never actually “closed” that we saw).

Spectacular hikes and also a couple scenic drives. Again, I include a few of our pics here, to perhaps whet your appetite. 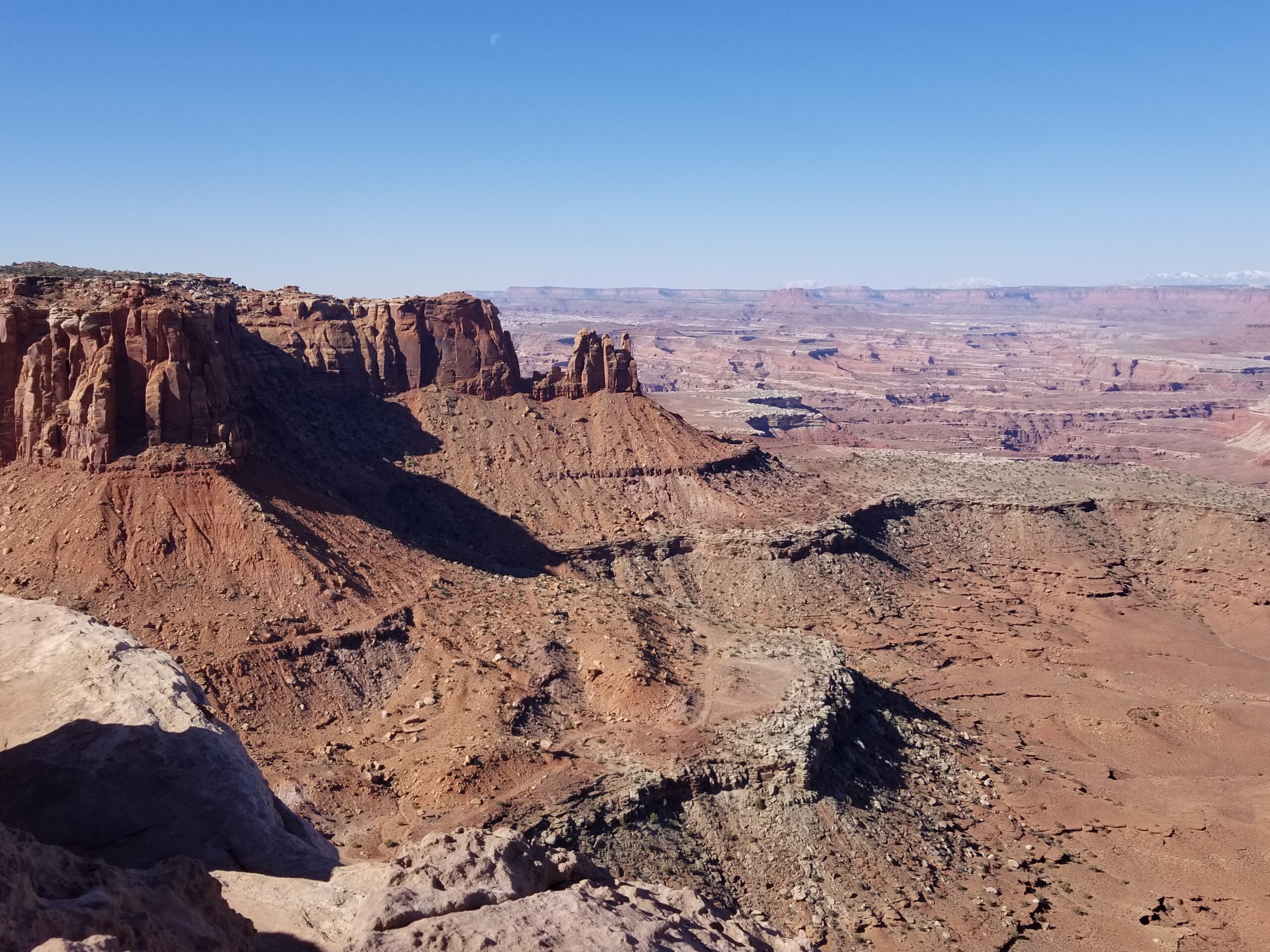 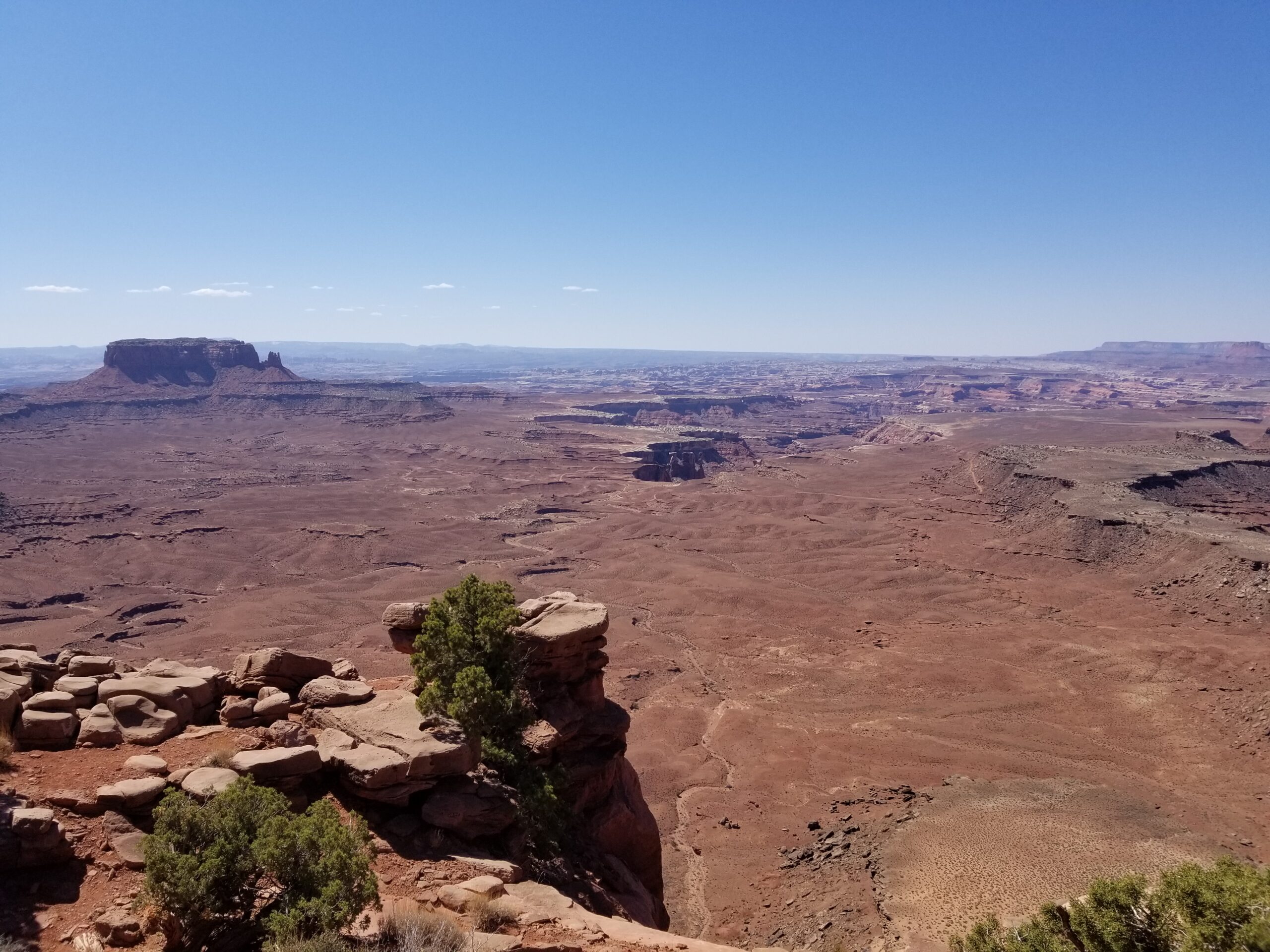 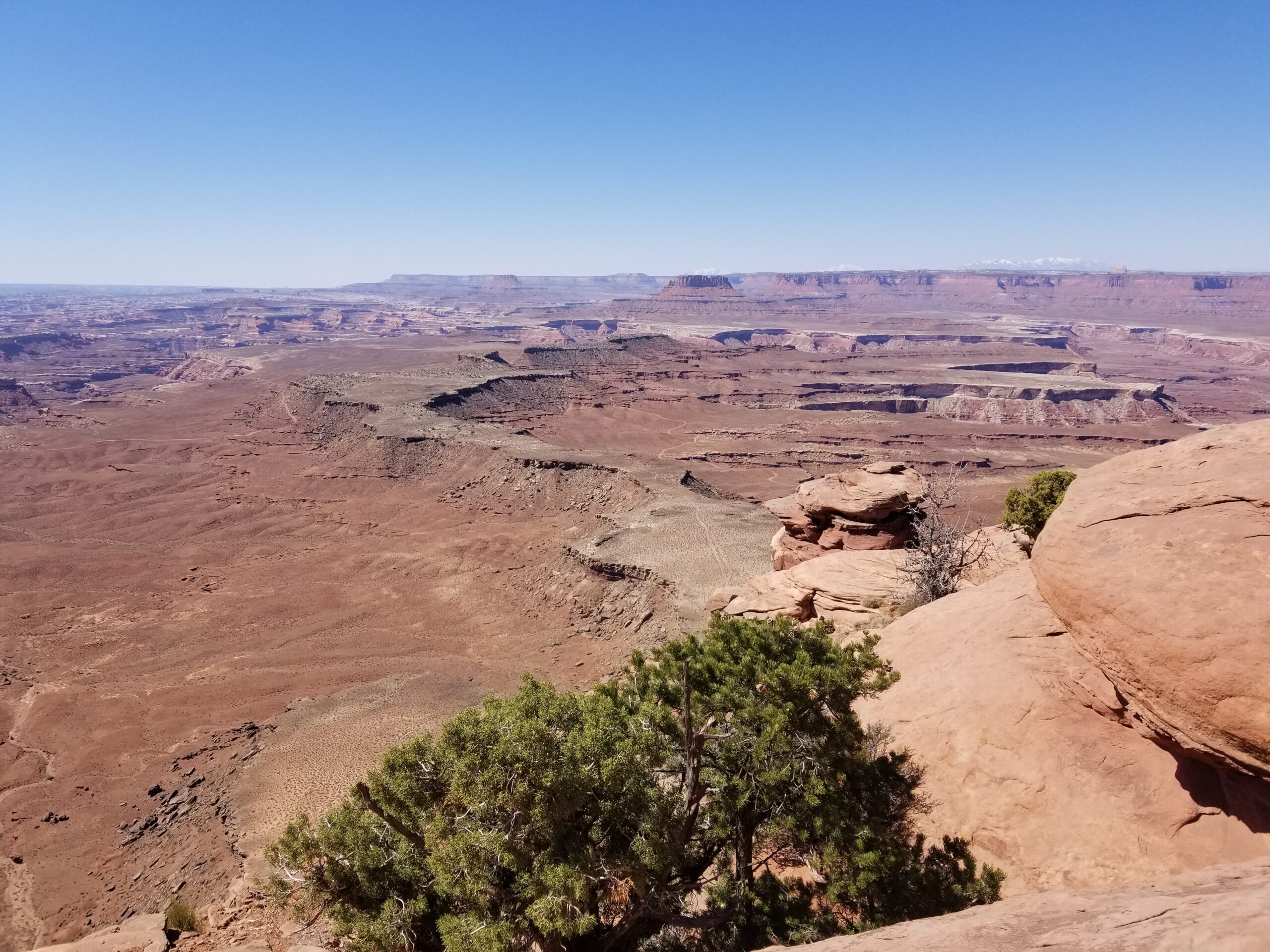 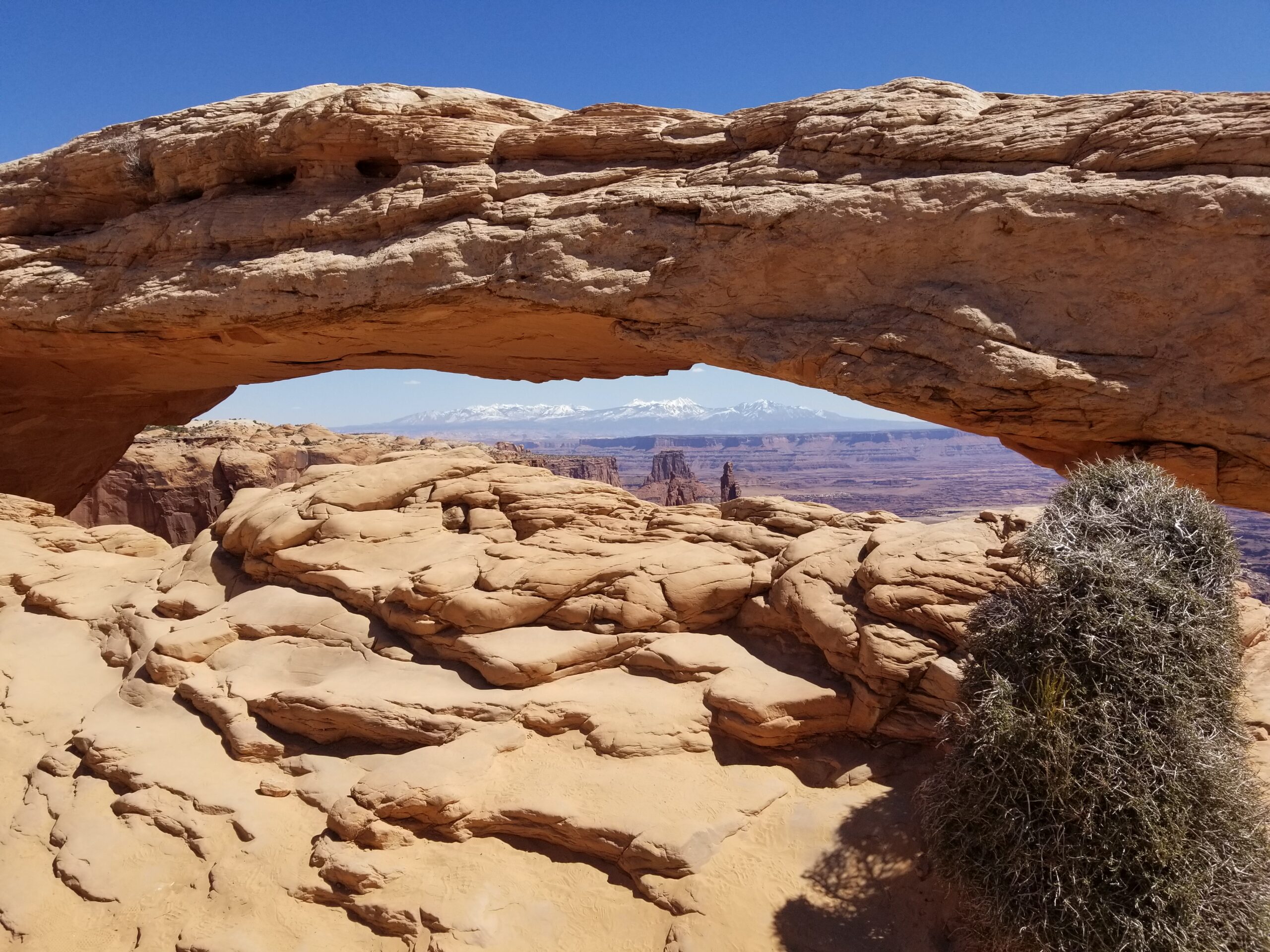 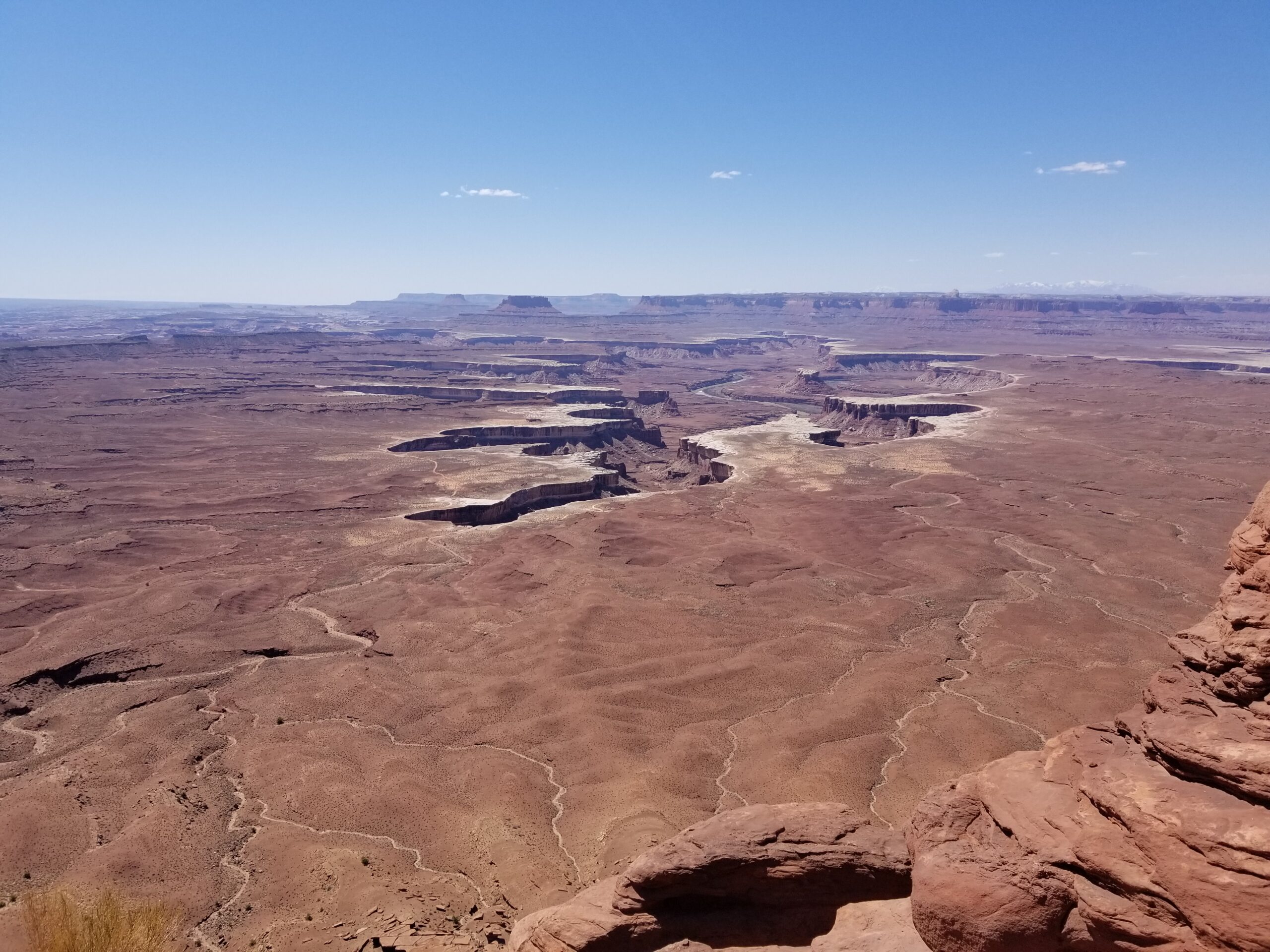 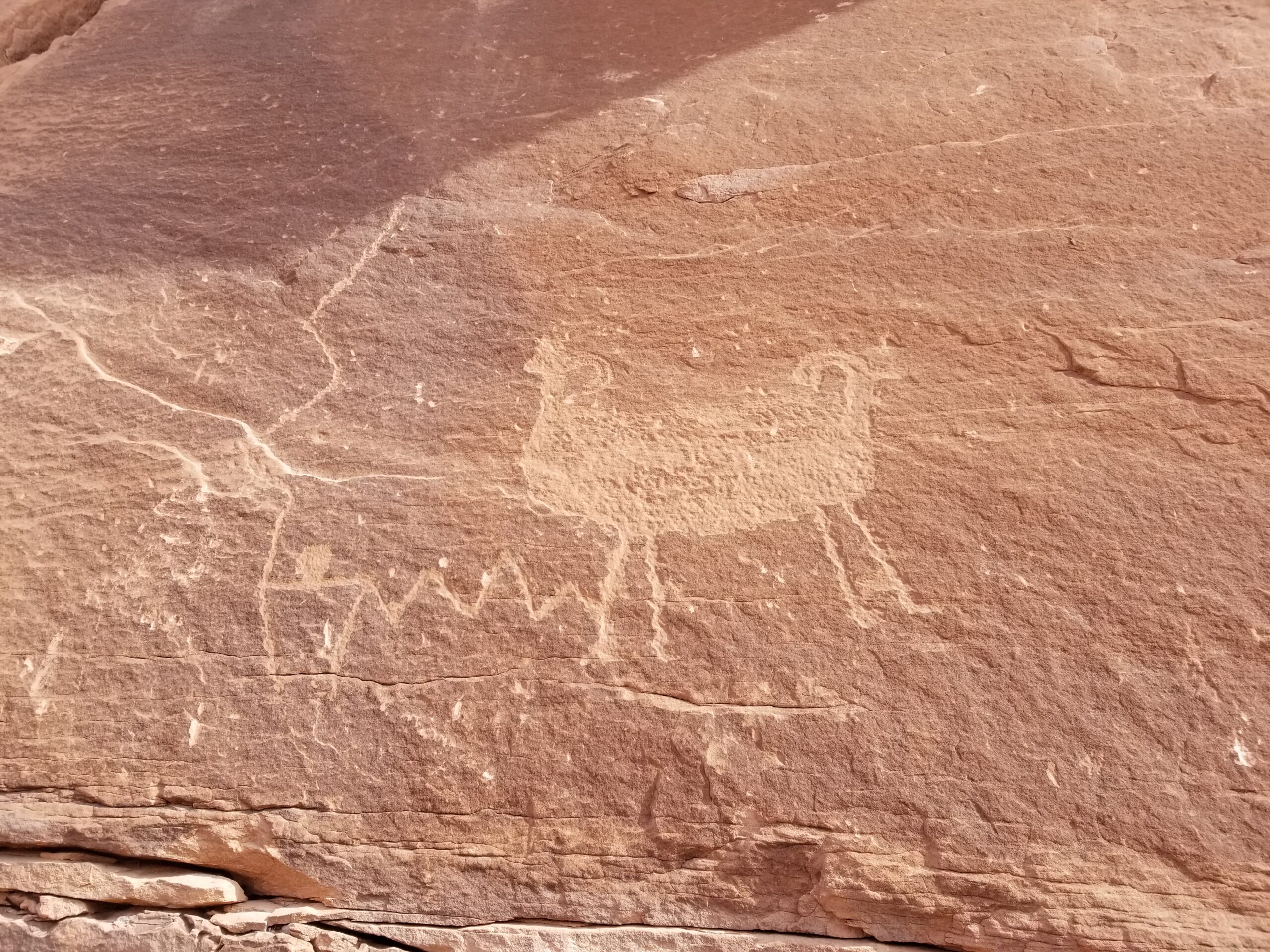 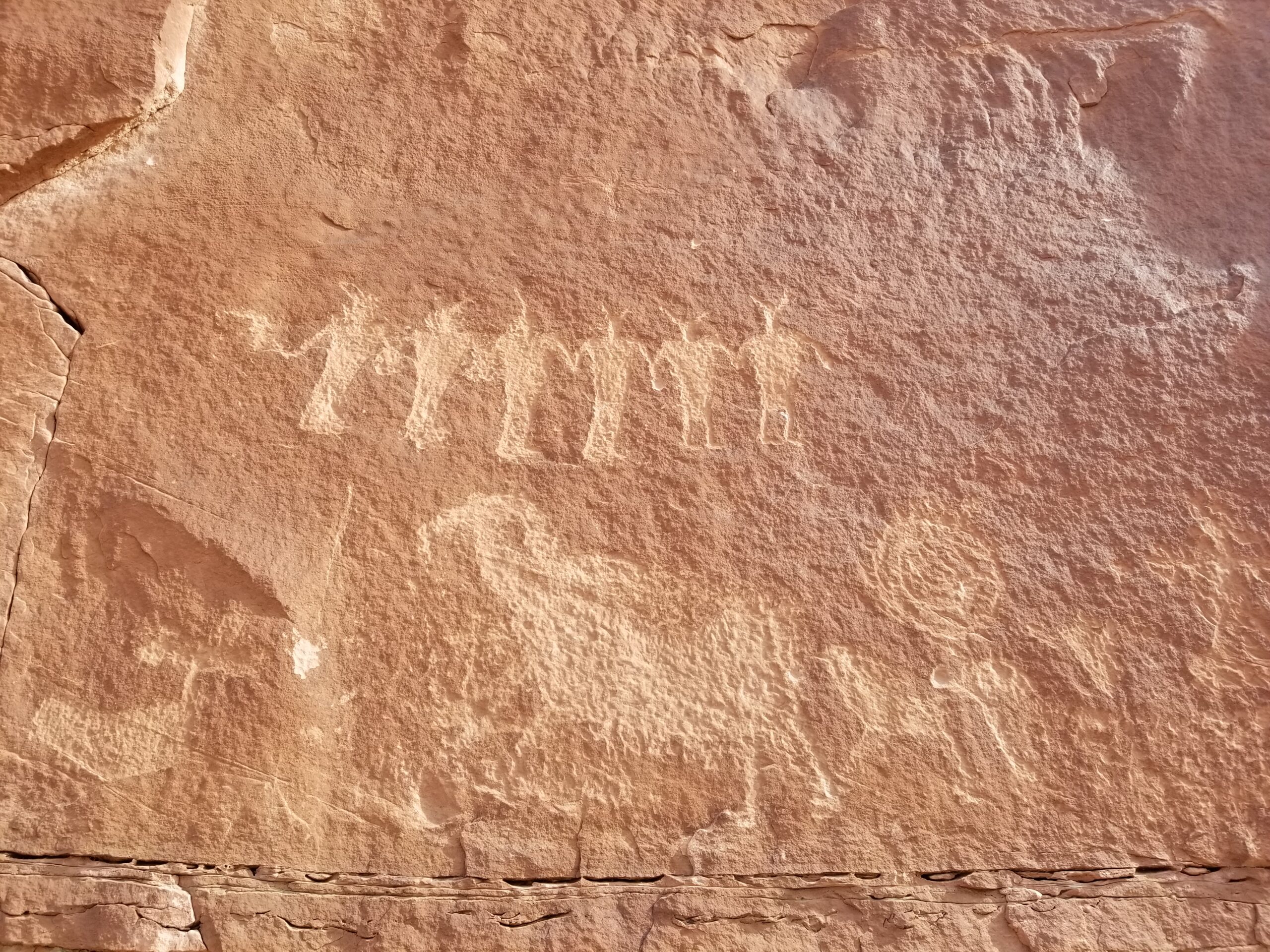 As we were heading toward Moab, we had another of those “Happy Accident” Experiences. I occasionally speak with friends and other folks we have met in our travels, and I happened to text Max Hendrix. Asked him what he was up to, was he flying again (He’s a 777 Pilot for American), etc. It came up that he was planning to be in Moab…When? EXACTLY WHEN WE WERE PLANNING TO BE IN MOAB!!! And exactly ½ mile down the road from us!

We immediately planned to spend some quality time together as neither of us was willing to ignore such a kharmic occurrence. In fact, He and Amanda were kind enuf to include us in all their end-of-day meals with their Group of Off-Road-Crazy friends… Yes, both crazy AND enjoyers of offroad transit activities!

That group was the reason the Hendrix were in Moab, and we were the richer for it! It turns out Max has been coming to Moab for YEARS AND YEARS with an actual, formal offroad Motorcycle group he belongs to. With Officers and meetings and festivities! Larry, Pam, Eldon, Jeanette, Debbie, George, Dan (and his wonderdog Brandy) and many more — They call themselves the “Moab Mob.” I don’t know about that – they were all gracious and welcoming and charming.

now I can say Liz spends her days Knitting and Tinking

Liz even learned some new knitting tricks from Debbie – and I learned a new knitting WORD OF THE DAY. I have observed on many occasions that Liz Knits generally in a Two rows-forward followed by one row backwards manner – especially when she is working on a new pattern. This is because, as she is figuring out the pattern, mistakes sometimes happen, and she needs to back up, reconnoiter and then proceed. Turns out, according to Debbie, there is an actually word for that: Tinking (which is “Knitting, backwards!”). So now I can say Liz spends her days Knitting and Tinking…but NOT with a straight face!

Because this group comes to Moab Every Year, Max knew ALL of the “off”roads around Moab; including ones he felt our Jeep could handle. No way he could gauge if we (or our marriage) could handle these rugged routes, but the Jeep he could plan for. He offered some up after careful (or not) consideration!

You may recall our last (and until Moab, ONLY) off-road adventure  was courtesy of Steve Florer. This was a thoroughly engaging (for the adrenal glands) trip in the Arizona Desert. Steve looks at least basically like a normal person (beneath that exterior, the jury is still out…), and THAT RIDE was the result — Liz still gets palpitations if she sees a yellow jeep.

Max, at least while in Moab if not in the cockpit, looks like a cross between Mel Gibson’s post-apocalyptic character of the same name (tho with less hair) and Max Headroom.

Perhaps We SHOULD HAVE KNOWN.

Perhaps We should have RUN the other way…

The first route Max suggested was the La Sal Mountain Loop, which was completely paved, THOROUGHLY scenic, and directly responsible for the overconfidence we displayed even considering the other routes Max proposed.

Max’s next suggestion caused us to undertake the Potash Route, ending with the Schaffer Trail. This was a route past a Potash Mine and evaporating pools – really interesting to see and consider.

Potash is mined from thousands of feet below ground. Water is pumped through the crushed ore to dissolve the mineral. The mineral-rich water is then used to flood huge ponds, where the water evaporates and leaves the Potash behind. This is scooped into huge piles and shipped for use in fertilizer. Considering the industrial scale and potential for ecological impact, the facility is actually NOT an ugly scar on the landscape (IMHO).

Then, just to add a little extra spice, Max suggested returning by way of the Long Canyon route. “You’ll be Fine, he said…” Maybe he meant “After a week in Intensive Care?”

Let’s just say, this STARTED also as a paved road, changed pretty quickly to rocks and ruts and boulders and nearly ended up in marriage counseling at least, if not divorce court!!

Along the way was THE spot where Thelma and Louise actually ended their story (NOT the Grand Canyon as the movie intimates).

Liz said, “I need to speak with Max…”

The Jeep was a trooper for sure, as was my co-pilot and better half. At the end, as we hauled ourselves up the last, rutted, rocky bit onto real pavement, Liz said, “I need to speak with Max…” With a look I had seen a few times, truth be told. I was pretty sure he would not enjoy that conversation, and there would be none with me for the foreseeable future.

Then her eyes twinkled and all was well. More or less. Anyway, well enuf that we went on two more off-road adventures.

Next was the Gemini Bridges road. Knowing now what to expect, Max upped the ante a bit. This road was NEVER paved – pretty much rocks and boulders all the way. The final route he suggested was the Onion Creek/Fisher Valley road. Actually, he suggested about a dozen more, but we ran out of days, and selected just this one. It was easier, but the “off”road went THROUGH Mighty-Mighty Onion Creek 29 times along the way, which was fun.

After all this, Liz and I are still married, and Liz FINALLY confessed to Max why she was (pseudo)upset with him: Nothing to do with NOT liking the experience… She was afraid I might LIKE the offroad life and associated toys, which I would immediately be looking to buy and somehow haul around with us!

I have to confess, it WAS fun, but not interested in more toys and FOR SURE do not have the space. Just ticked this off my “to-do” list.

After 10 days,  we are pleased to report that we (Liz, Dan AND the Jeep) survived a very strenuous agenda of hikes and drives.  Our next stop, we decided, would be Blanding Utah. College Roommate Craig told me there was an awesome museum there. Meanwhile, College Buddy Dick congratulated College Roommate Craig on having the creativity and cajones (in at least equal measure)  to concoct a story sufficient to cause me to spend 2 nights in Blanding, Utah.

We shall see who was right – and so shall you if you can wait for our next post!!!

← The Utah Weird Food Tour Continues ← More “You cannot make this Sh*t Up” than any post to date!!!
Next Up

More “You cannot make this Sh*t Up” than any post to date!!!

Thought for the day (Click here)... [caption id="attachment_9672" align="alignleft" width="300"] Cruising Again![/caption] Once we finished with Utah (and I assume…

Our next stop on the Utah Park Parade was Escalante, where one can access Escalante/Grand Staircase (technically not a “Park”…