Our next stop on the Utah Park Parade was Escalante, where one can access Escalante/Grand Staircase (technically not a “Park” but a “Monument”).  Also in the area was the Utah State Petrified Forest Park.

On the way to Escalante, we encountered the first road and first instance where I thot RV WHERE YET was NOT going to make it up a hill. It was at about 8,000ft and an 8% grade…first gear, not-quite-maintaining 10MPH, belching black smoke all the way!

what a STUPID name for THAT control

The black smoke comes from unburned fuel – at 8,000 feet, there is not enuf oxygen to burn all the fuel the mechanical fuel pump…tuned for sea level…provides. The CORRECT strategy is to back off the “Accelerator” Pedal (what a STUPID name for THAT control in RV WHERE YET!) until the smoke ceases. But, I can tell you from direct and recent experience, it is HARD to back off the pedal when it feels like you are in danger of rolling backwards down the hill! I just hope no one saw the smoke cloud and thot there was a brush fire!

In addition to black smoke and (more) sluggish (than usual) engine performance, we found another way of informally telling the altitude: The diameter of Liz’s Exercise Ball expands in direct proportion to altitude until she’s afraid it will pop if she uses it!

Anyway, our first hike after arriving at Escalante was in Utah’s Petrified Forest State Park…and it was EXCEPTIONAL.

Have seen Petrified wood before, but the variety and colors therein at this particular spot was very spectacular. The hike itself was fairly strenuous, given that it stated at about 6,000 feet and went up from there. But the view from the top, while awaiting uptake of what few molecules of Oxygen we could find, were well worth it.

The next day, we decided to make a Jeep Trek down a Gravel road which eventually, according to the map provided at the Park Service Visitor Center, becomes “unimproved.” The destination was about 55 miles, but we made it barely 30. Not even close to the “unimproved” section because the “improved” gravel road was so rutted and washboard. Worse than any road I can remember in Alaska!!! We did get as far as an area with unique rock formations called the “Devil’s Garden.” 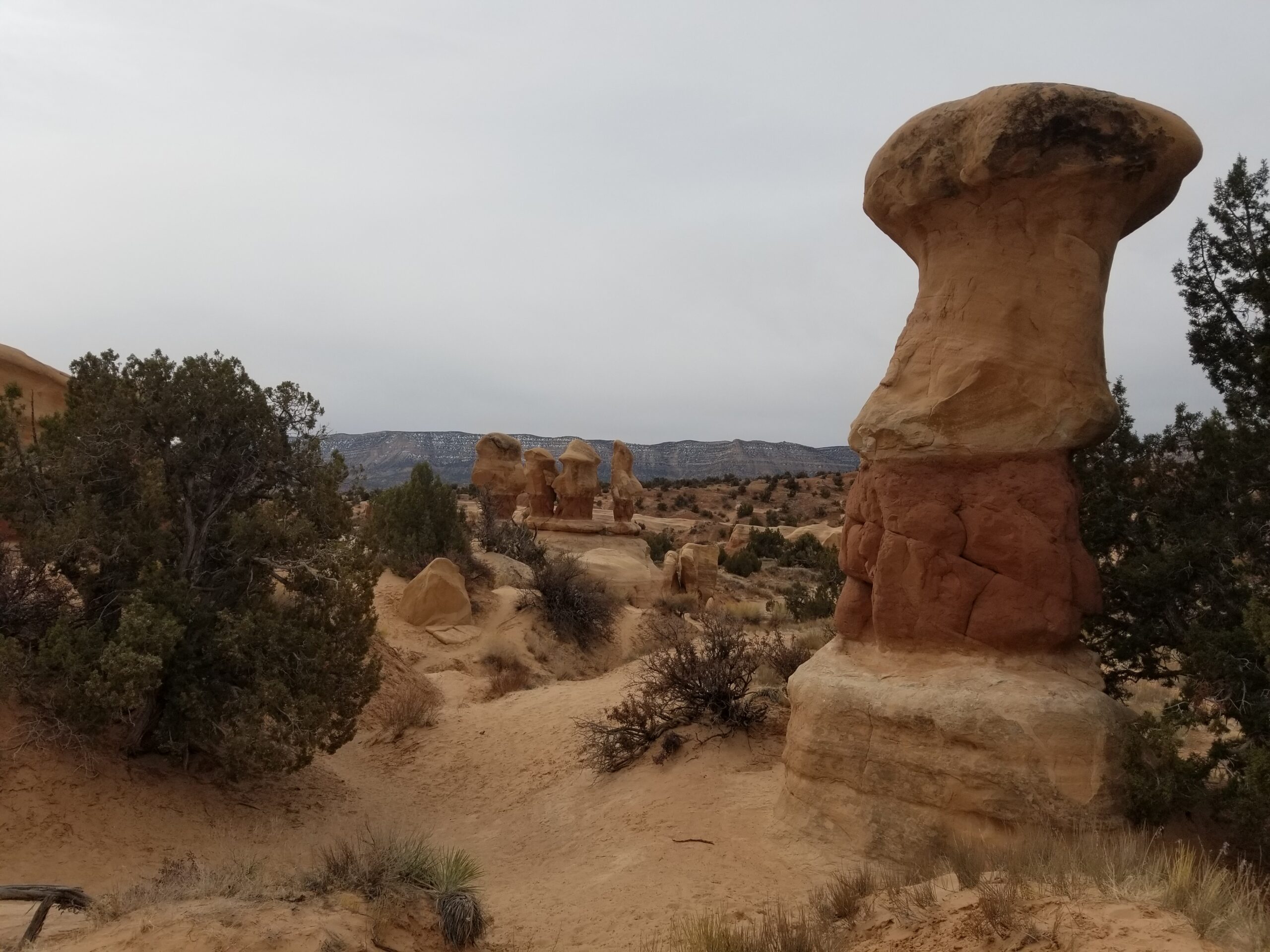 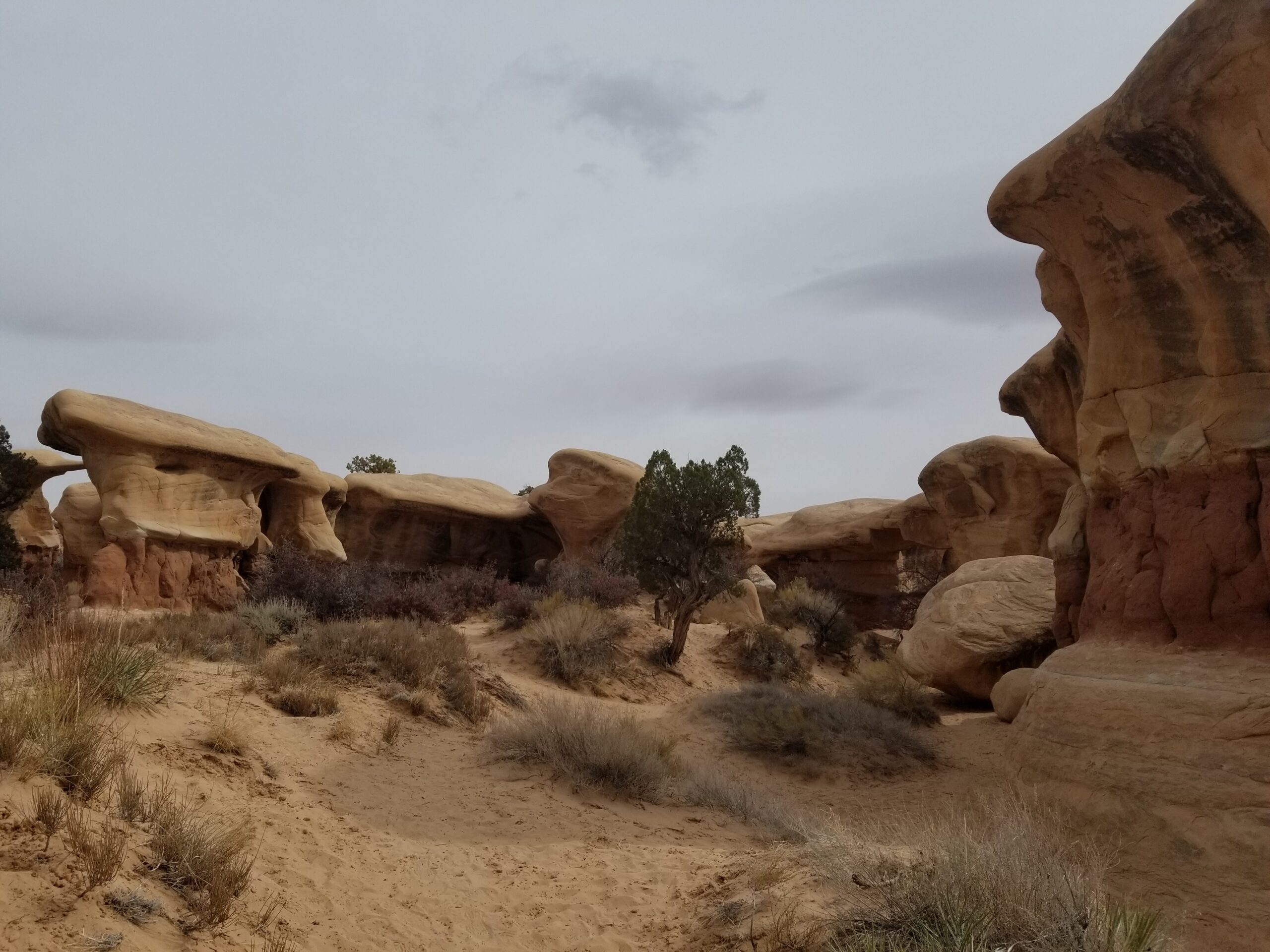 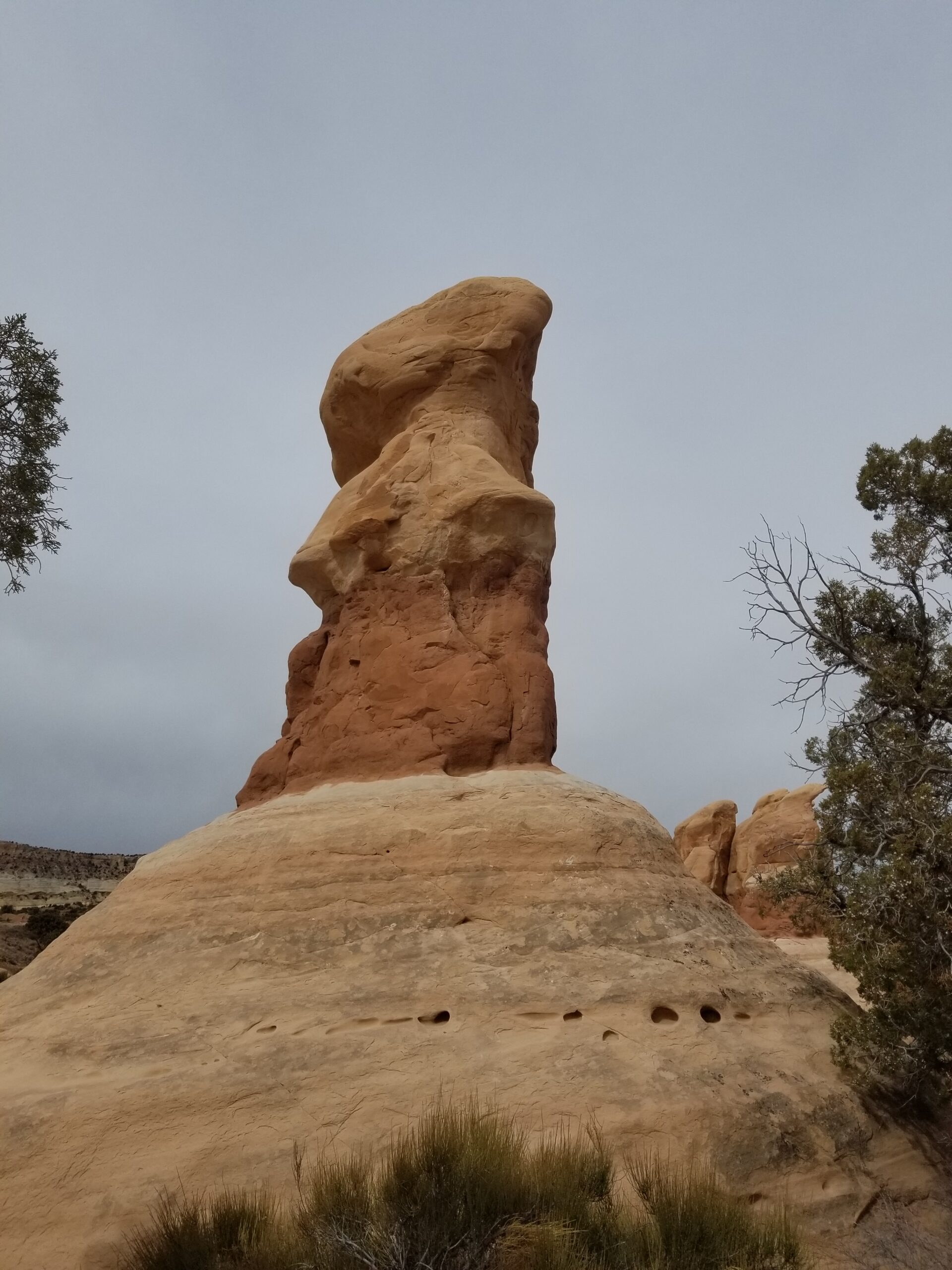 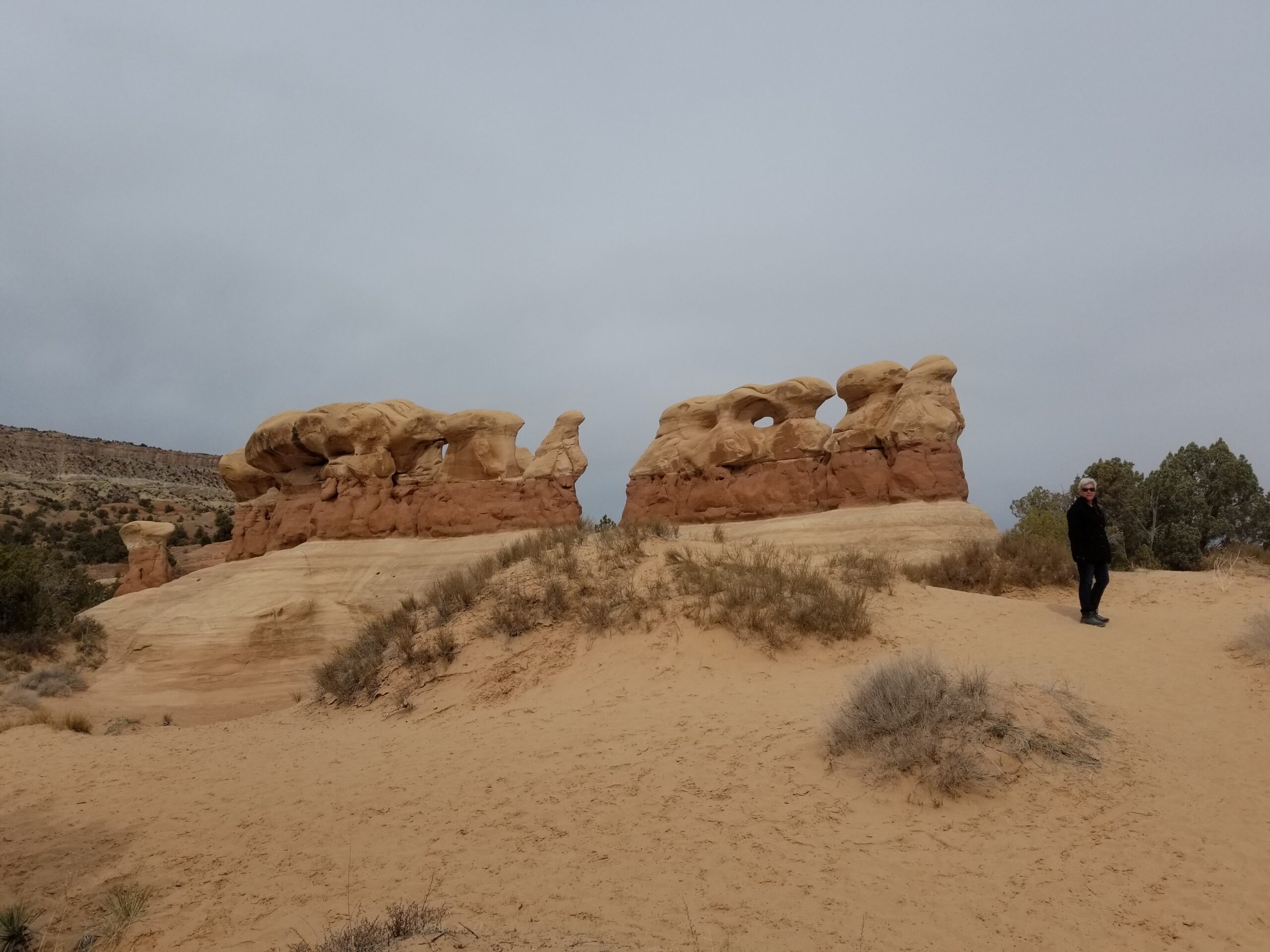 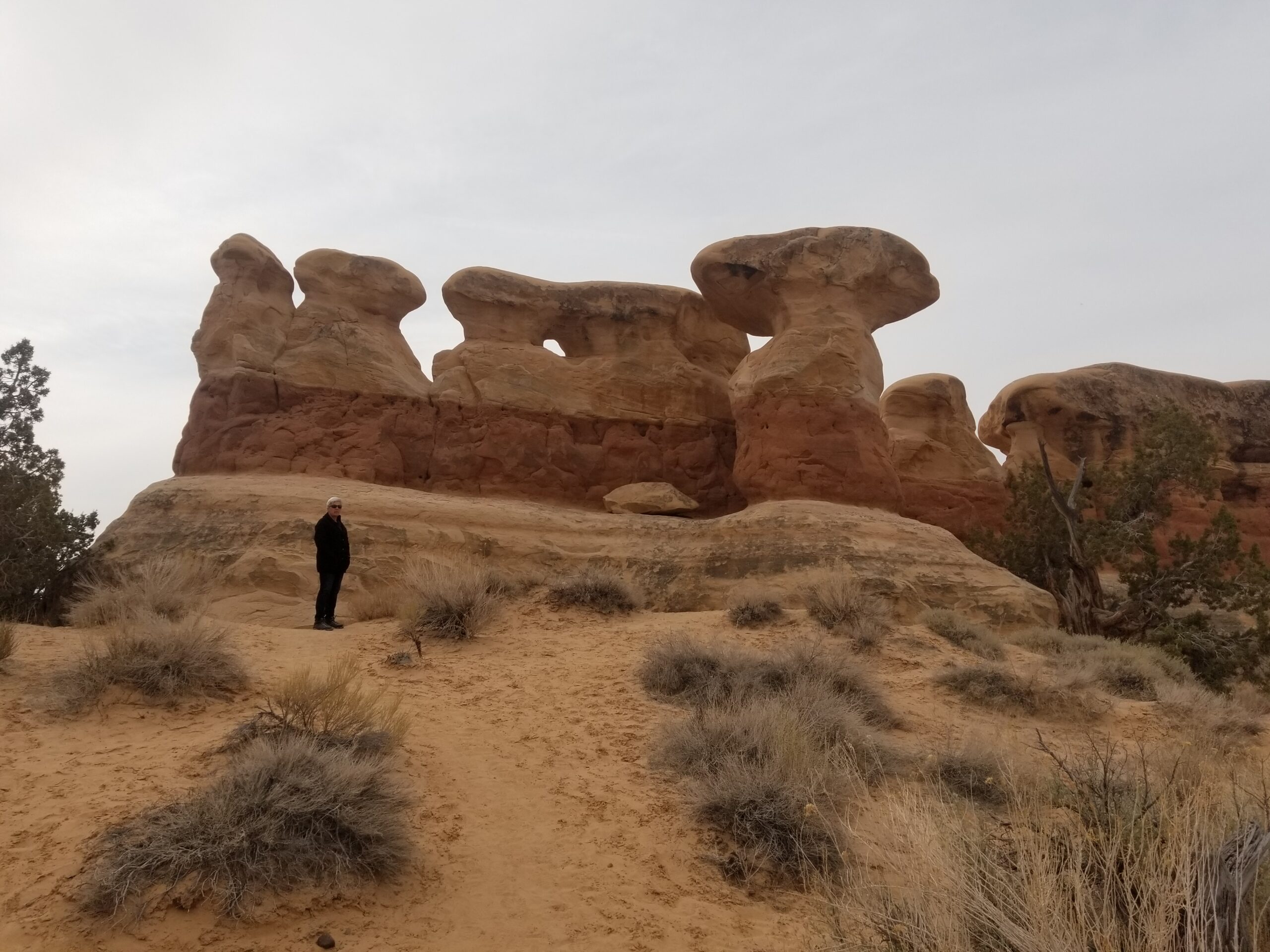 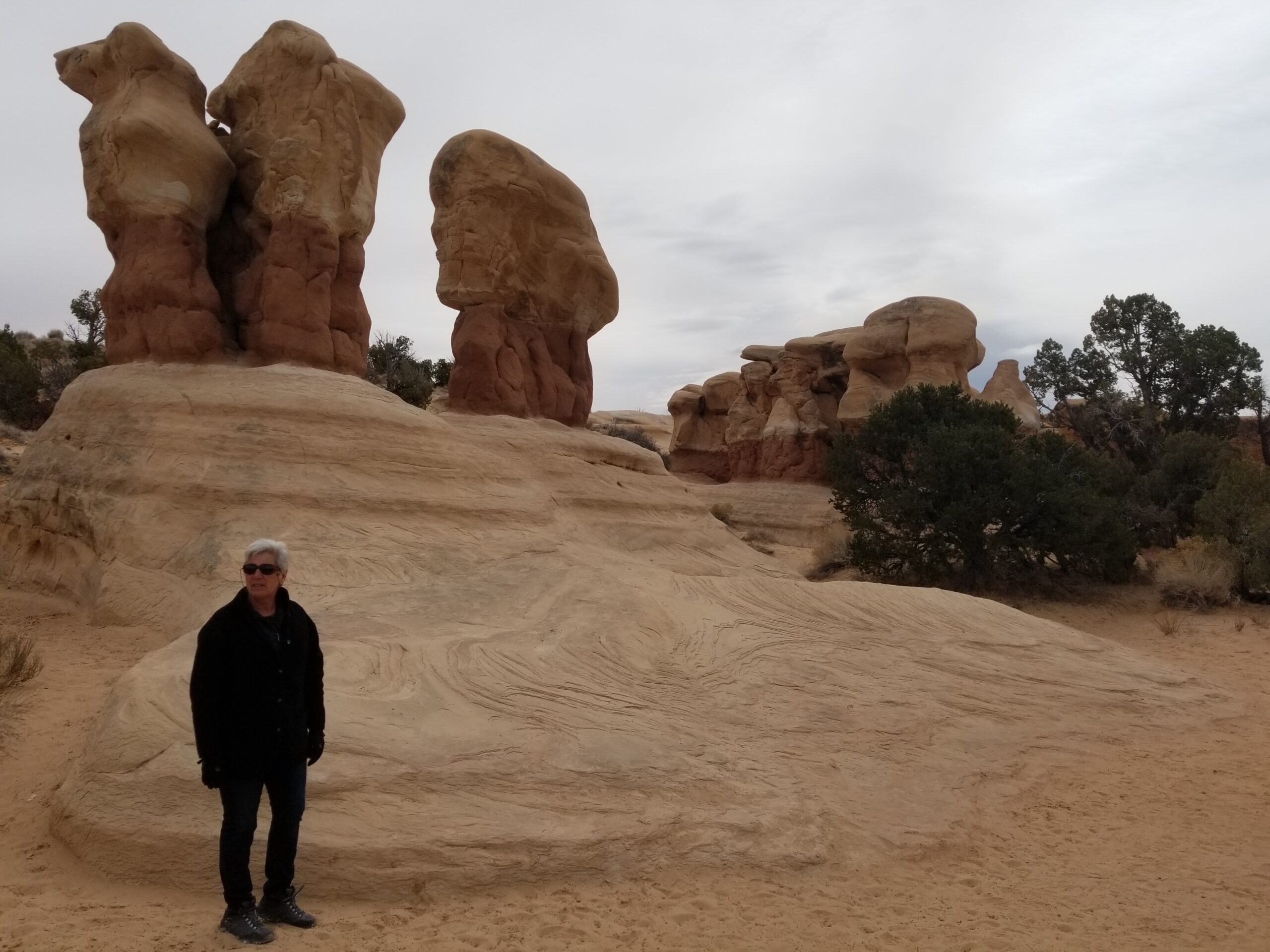 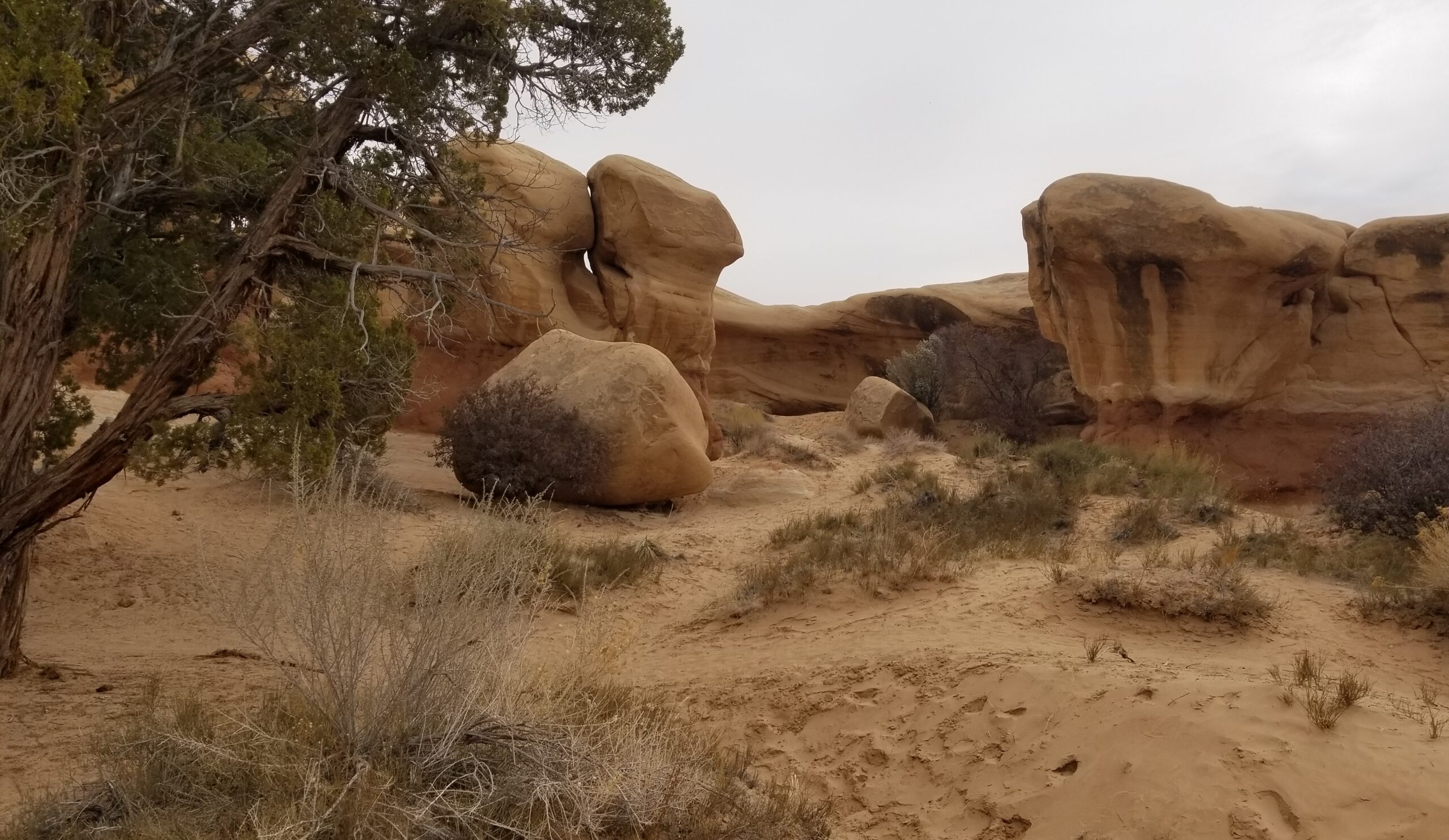 Being in Utah, we were hopeful with the Devil already in residence, of a taproom there, but no such luck!

with all due respect…that was ONE SHITTY ROAD!

After we described these road conditions, my college buddy, Craig Banister disclosed that, had we set the Jeep to 4wd (which I thought was only for mud, sand, snow, etc.) the ride would have smoothed out. Maybe in theory (something I did not know about 4wd, and will certainly try next time), but with all due respect, Craig, that was ONE SHITTY ROAD!

For the second time in our travels, we enjoyed a FOOD TRUCK right in the RV Park. This one had Mexican foods with home made blue corn tortillas. YUM.

She could have gone in front, but what if she needed to Push?

After Escalante was Capitol Reef National Park. Looking at the road – Utah 12 and Utah 24 – I was excited to see two scenic byways and two of the MOST BEAUTIFUL anywhere. I also noted a Pass at 9,500 feet with 10% grades!!! Remembering RV WHERE YET’s struggle getting TO Escalante, we decided that we would unhook the Jeep and Liz would drive separately so the Bus would at least not have to haul the Jeep.  Liz followed just behind me (or as close as she dared considering the Black Plume trailing the bus). She could have gone in front, but what if she needed to Push?

Capitol Reef was again, BEAUTIFUL, and again different than any of the parks so far. Utah is blessed with Multiple Parks, each spectacular and VERY different. I attach some pics from the many hikes we did in the area. Here are some Pics. 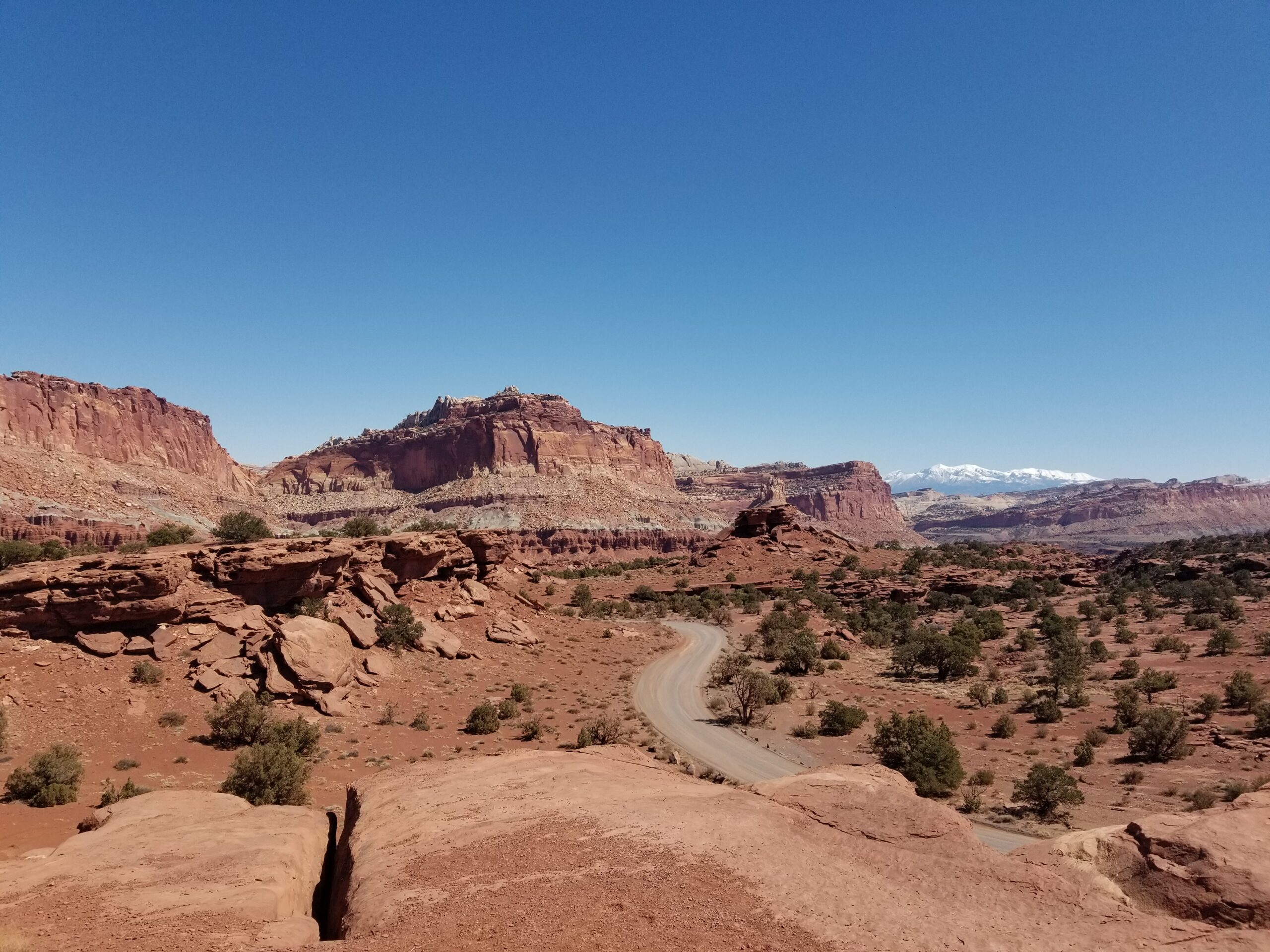 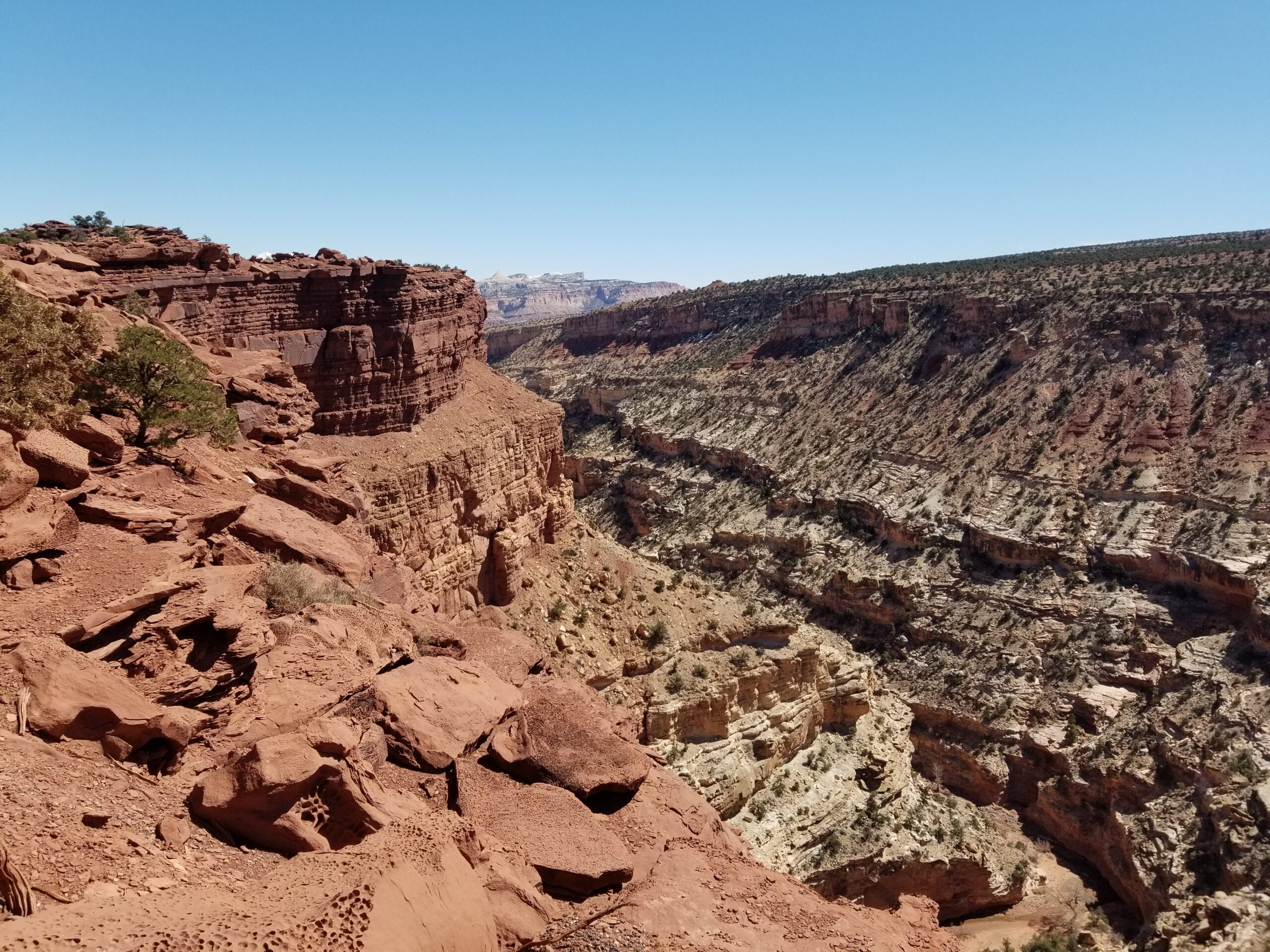 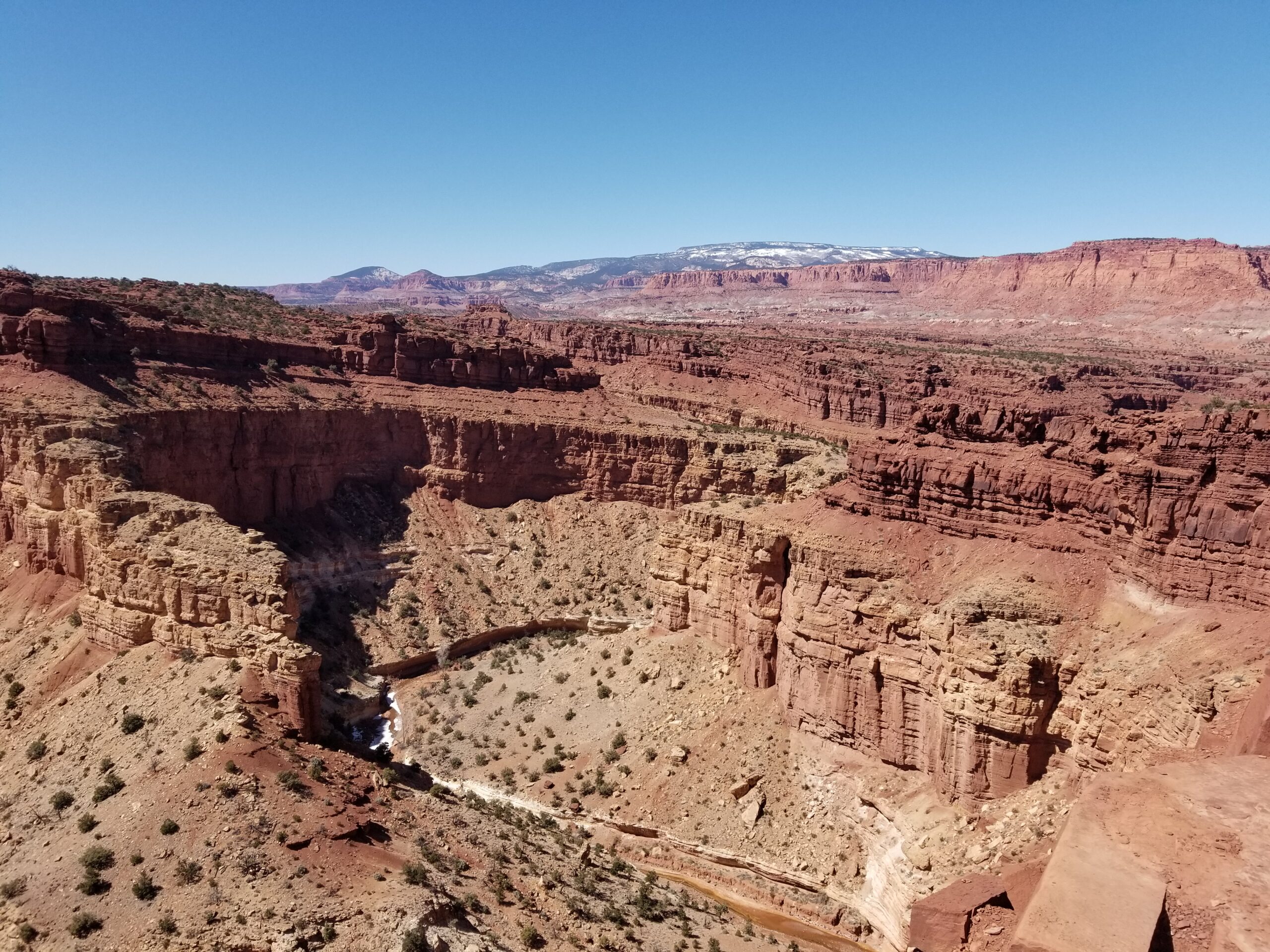 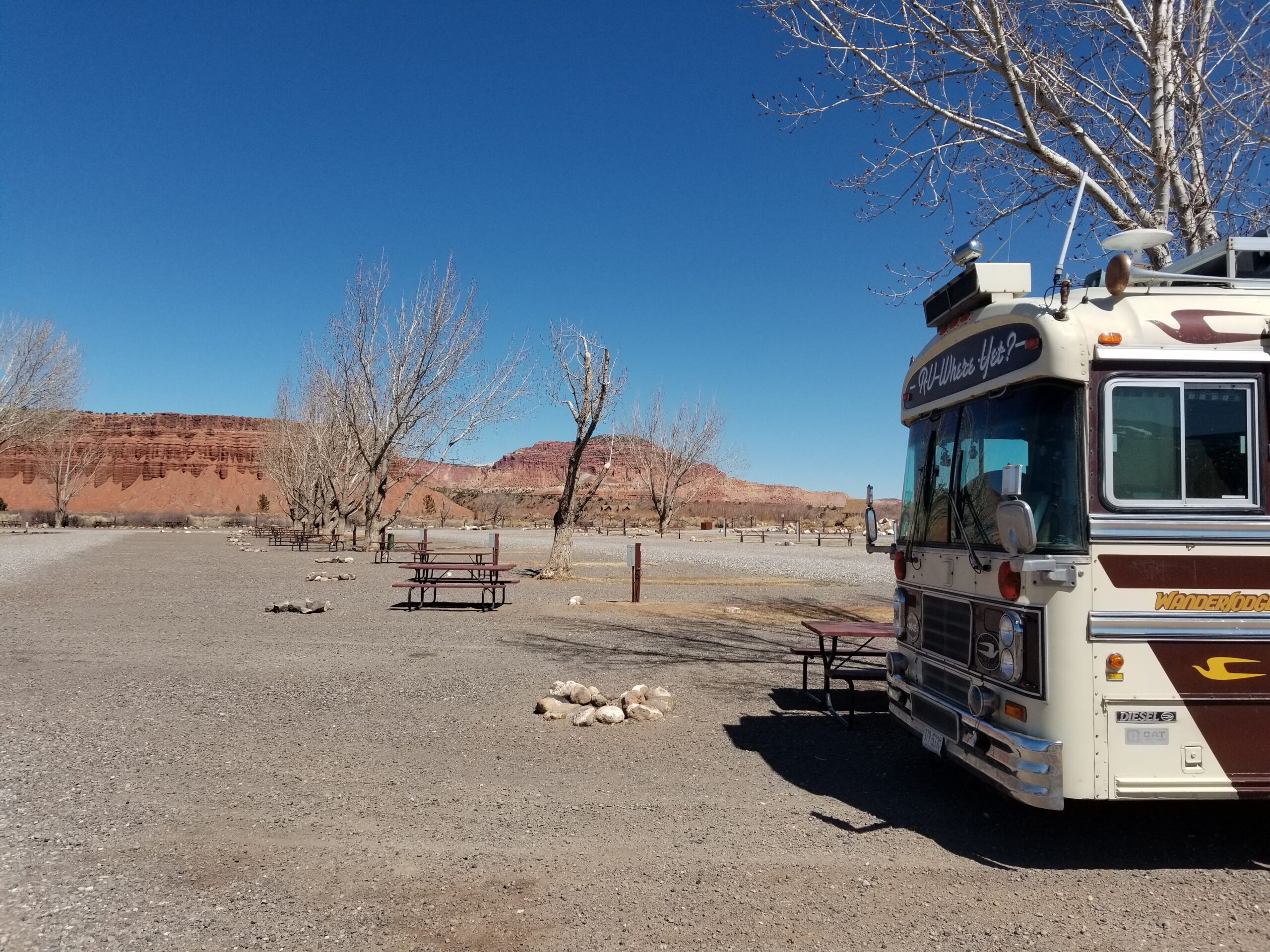 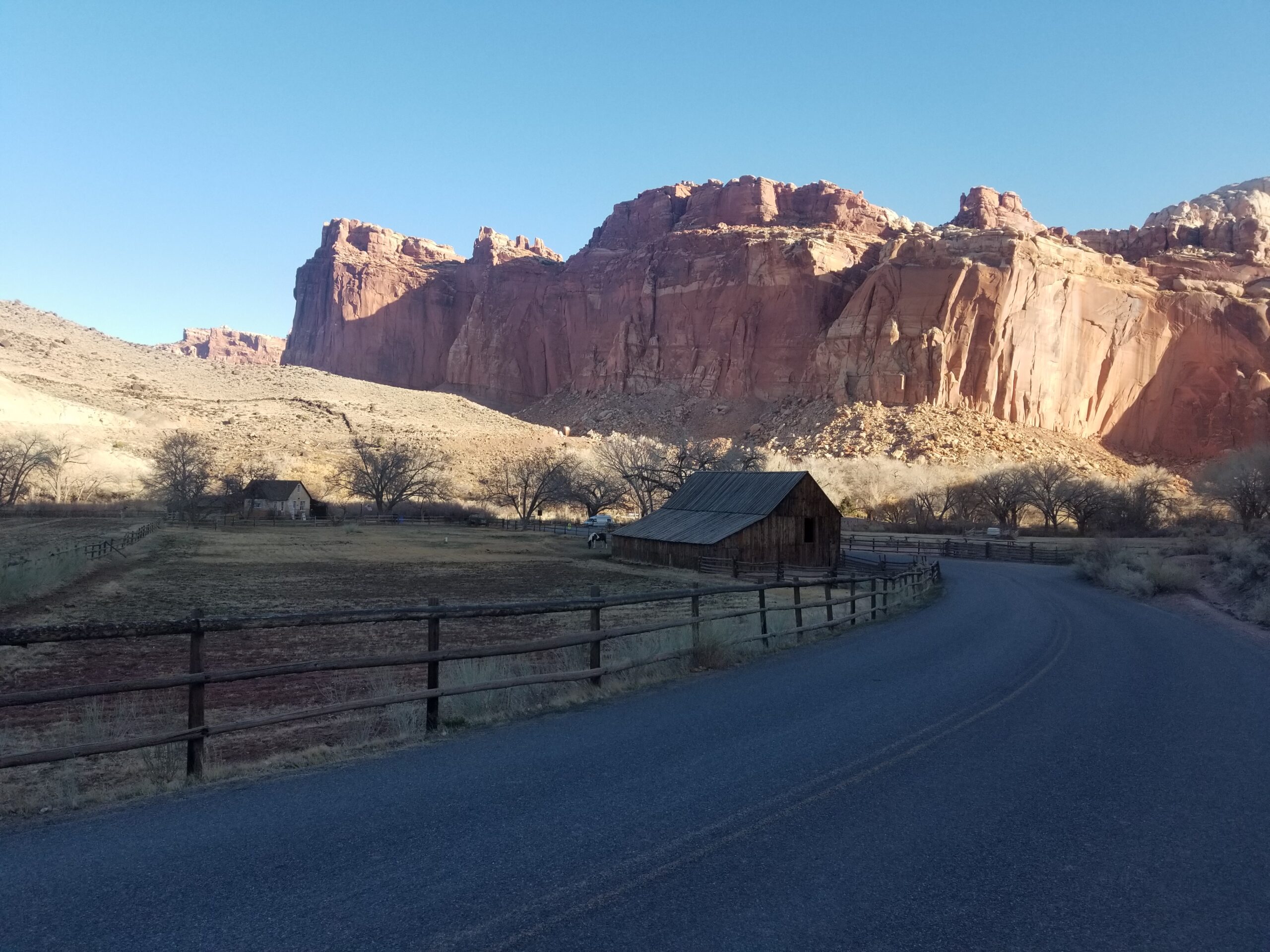 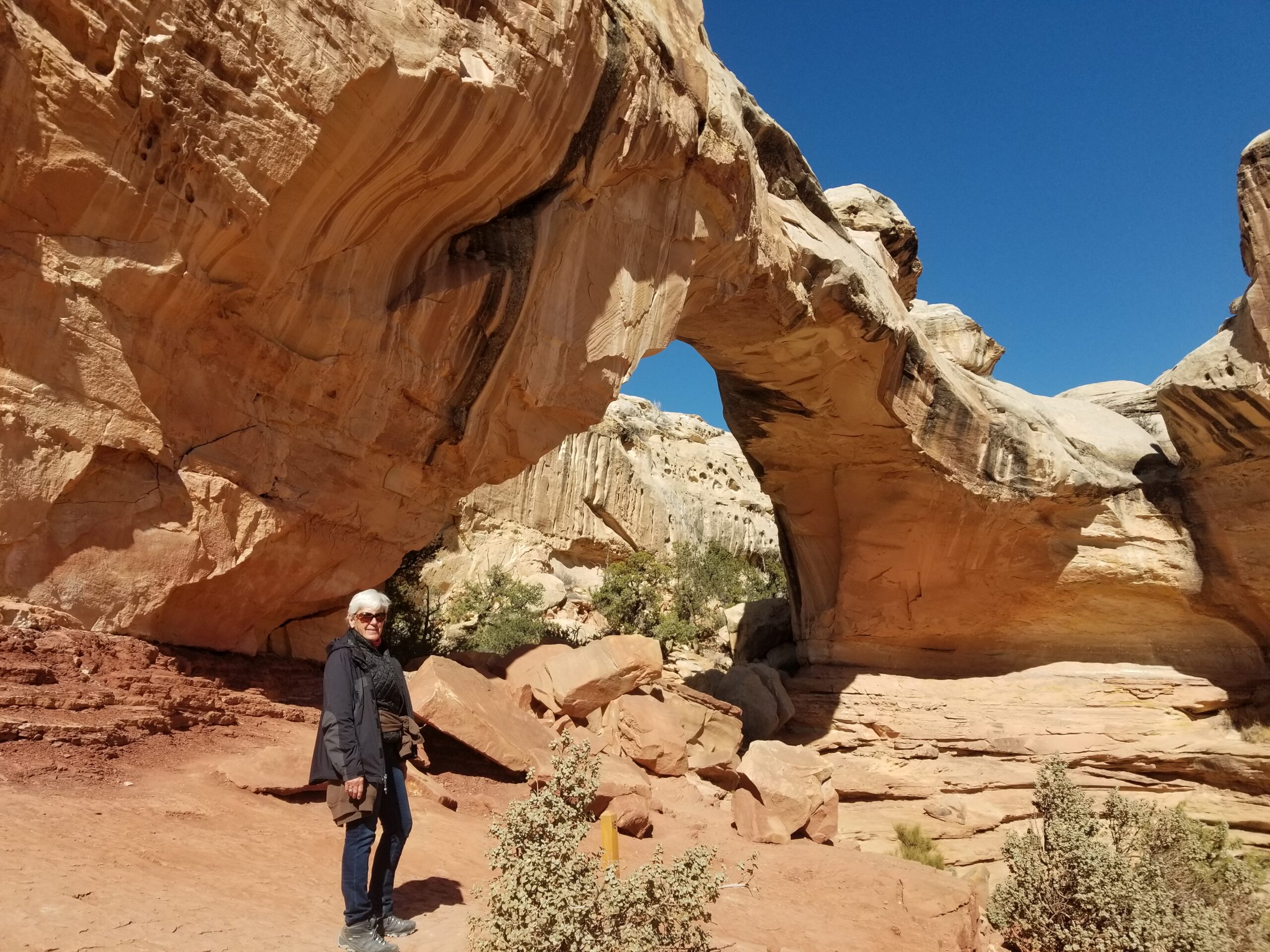 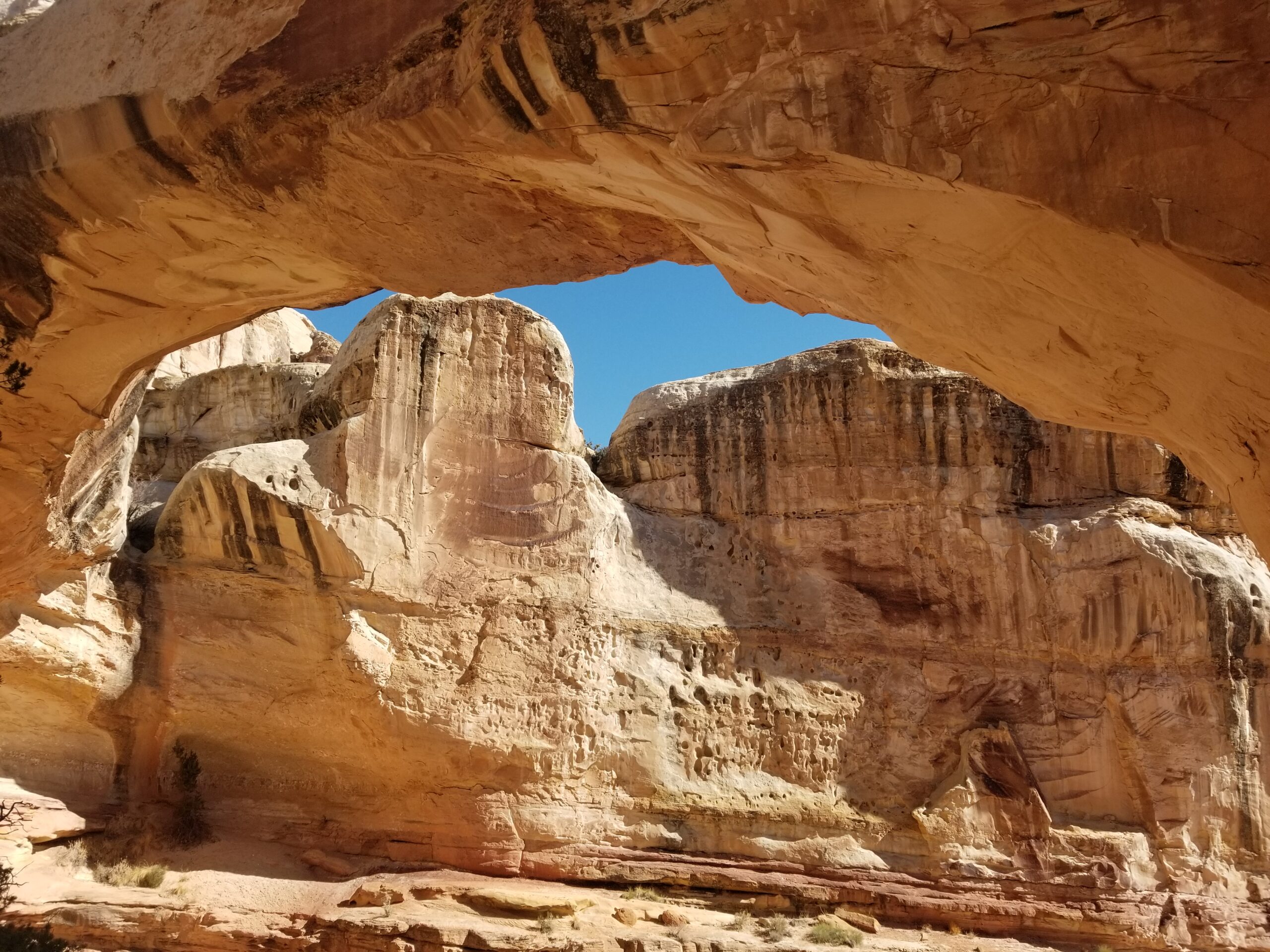 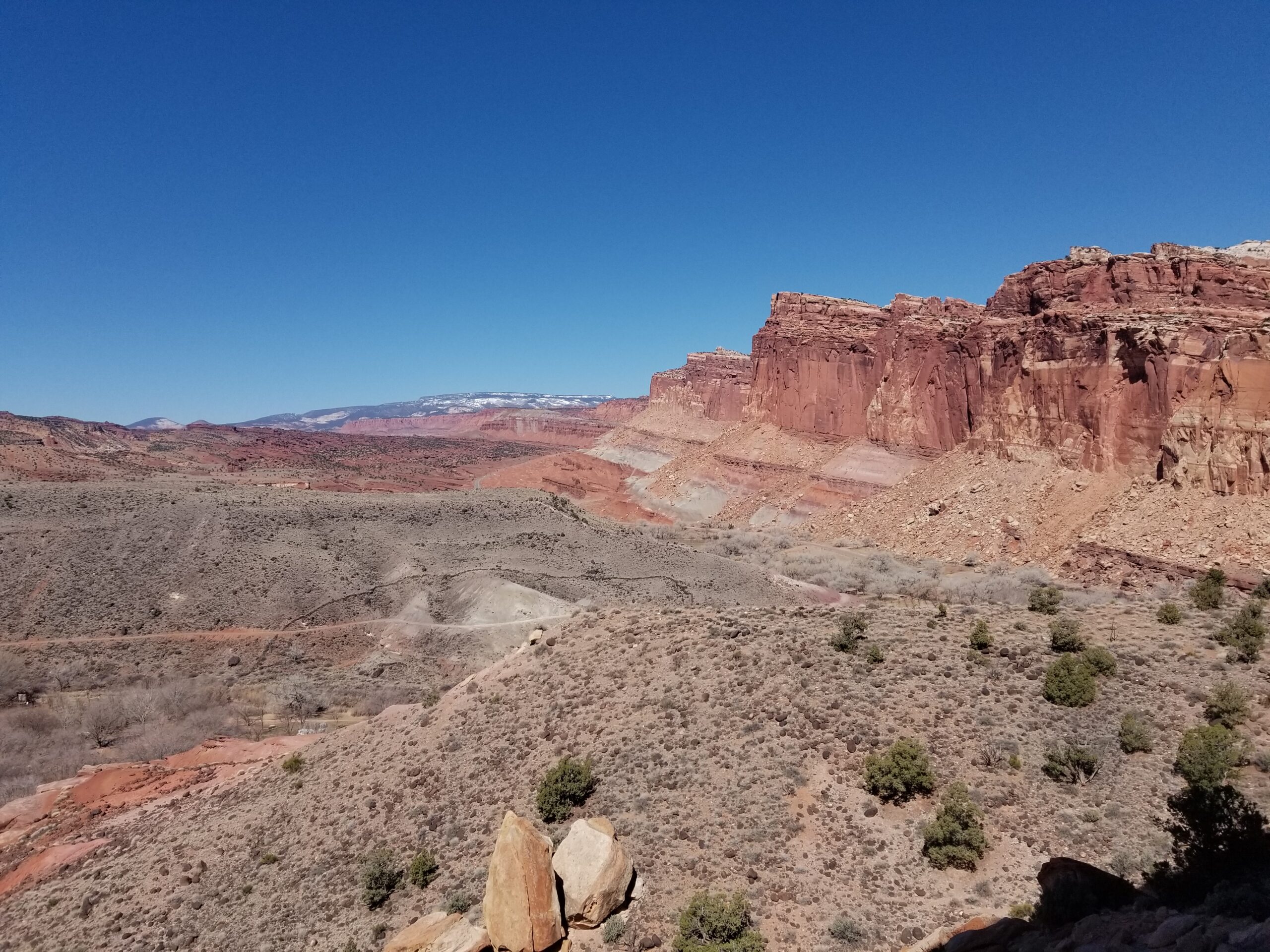 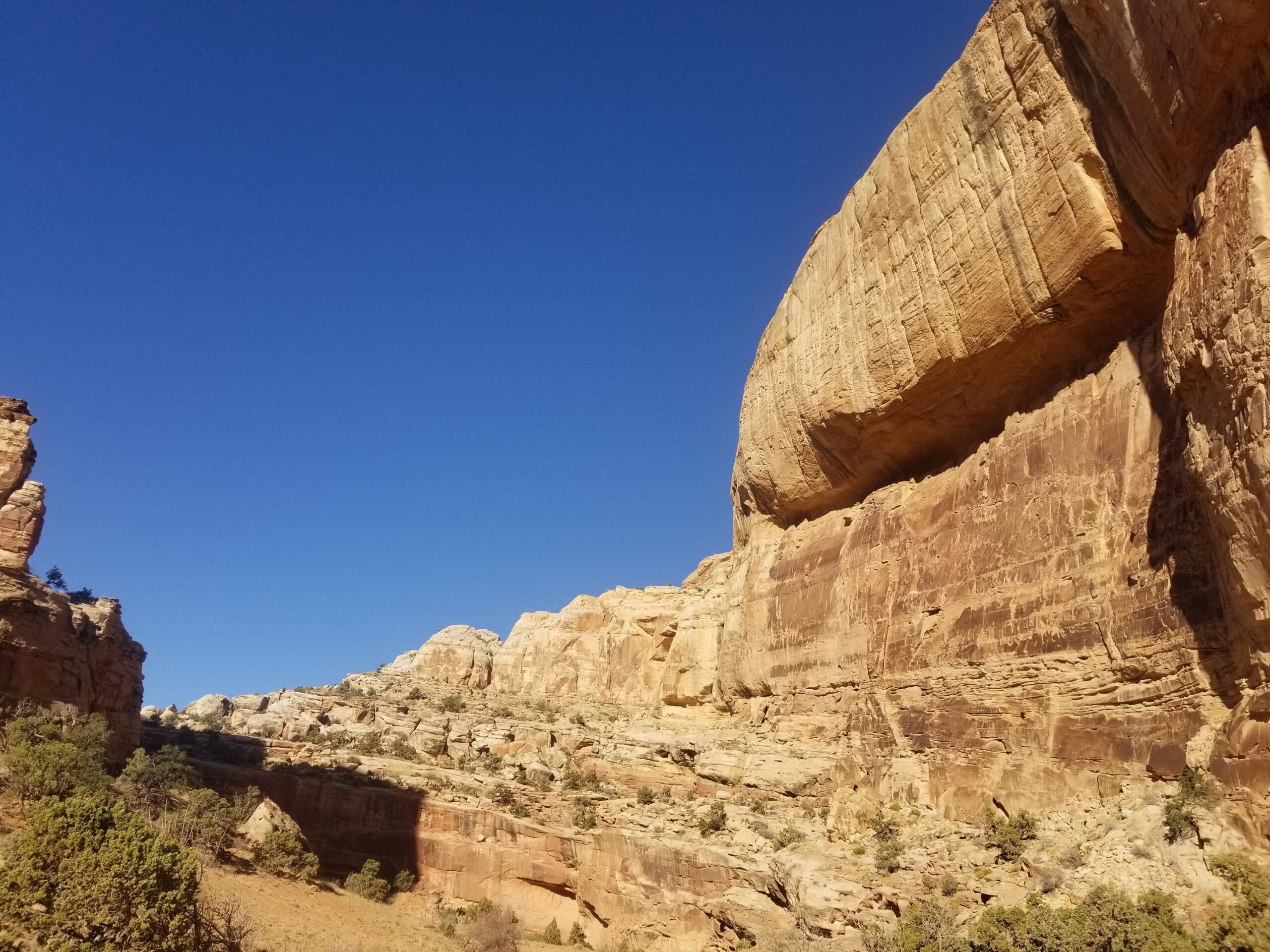 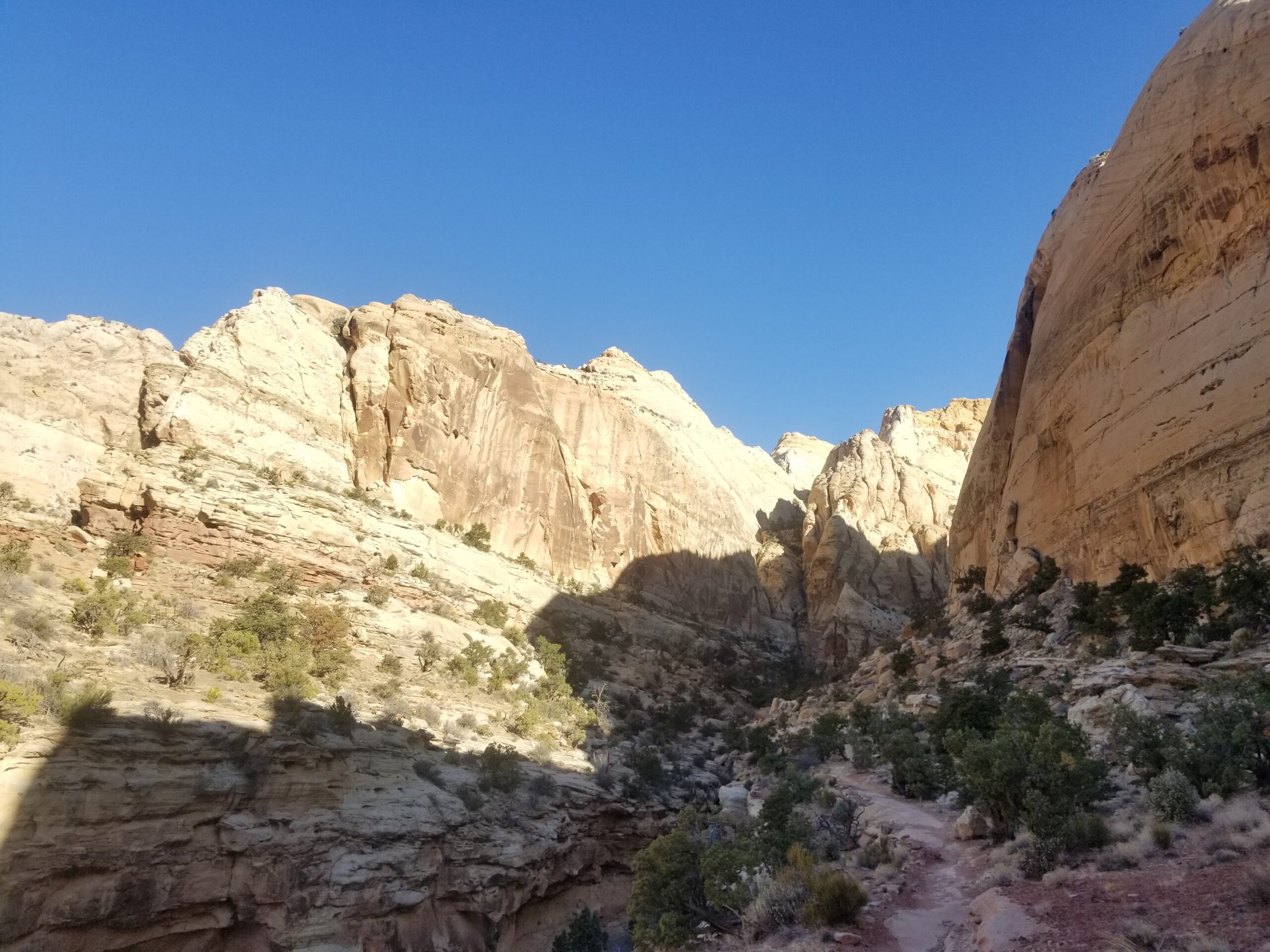 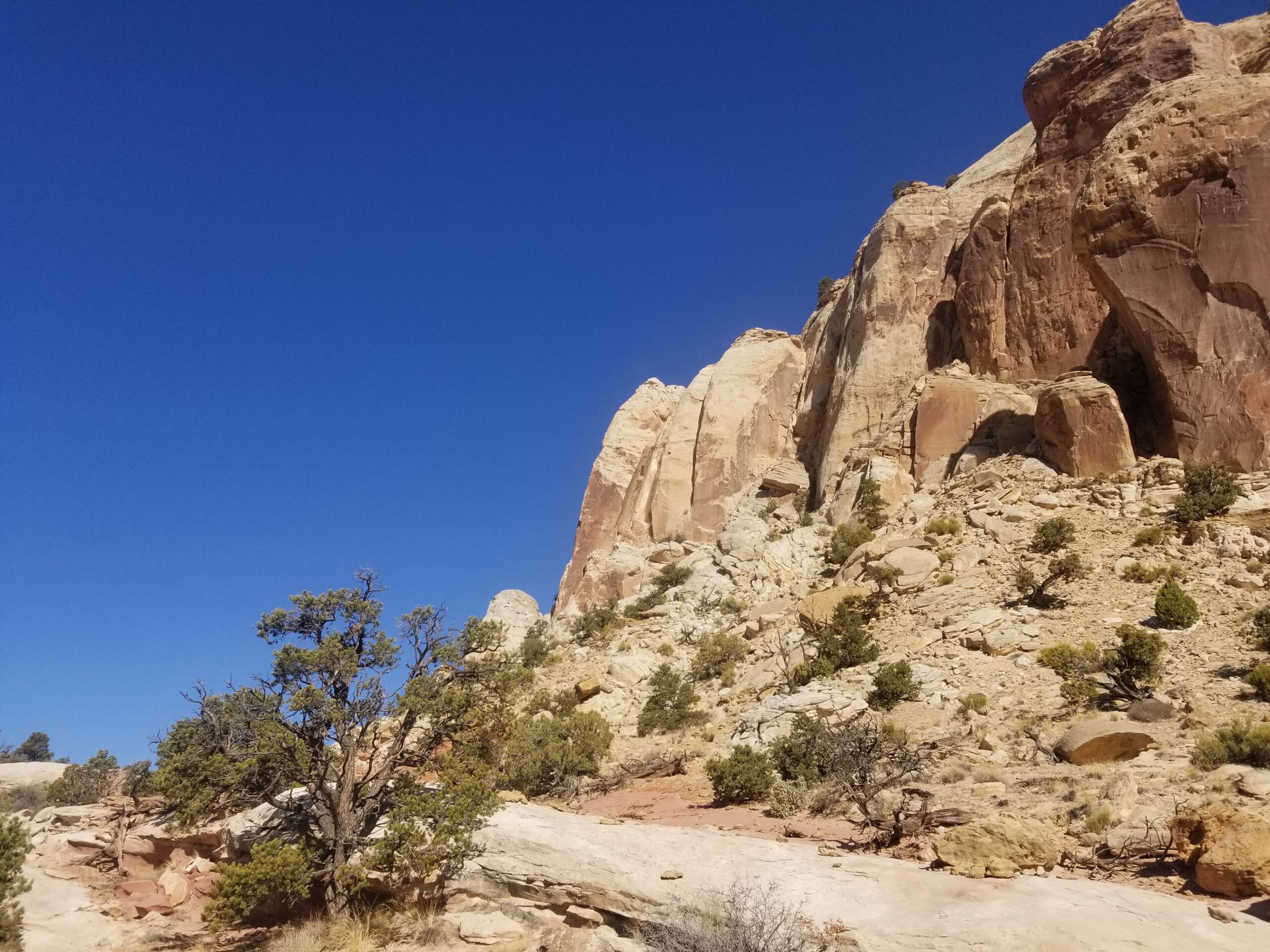 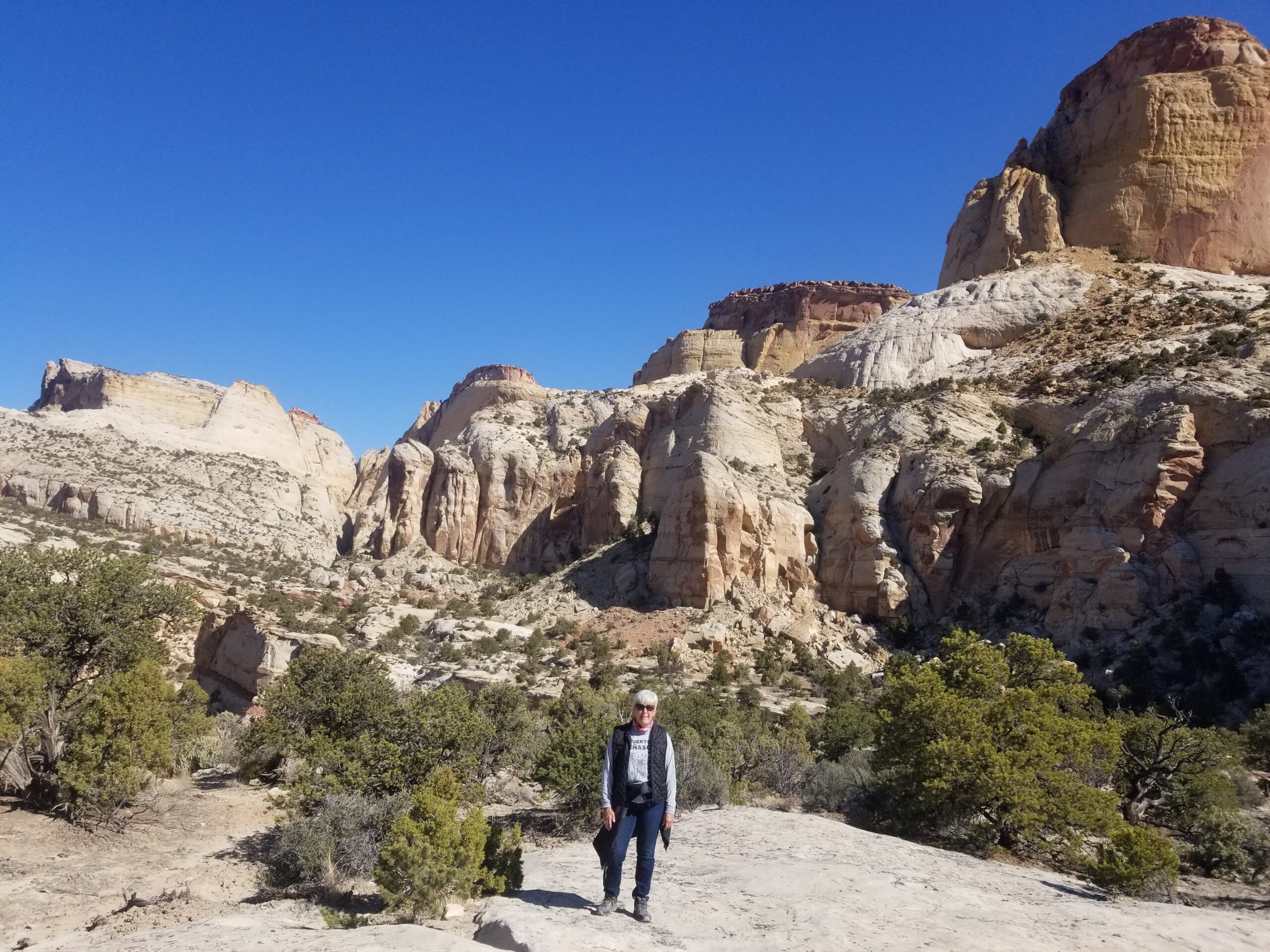 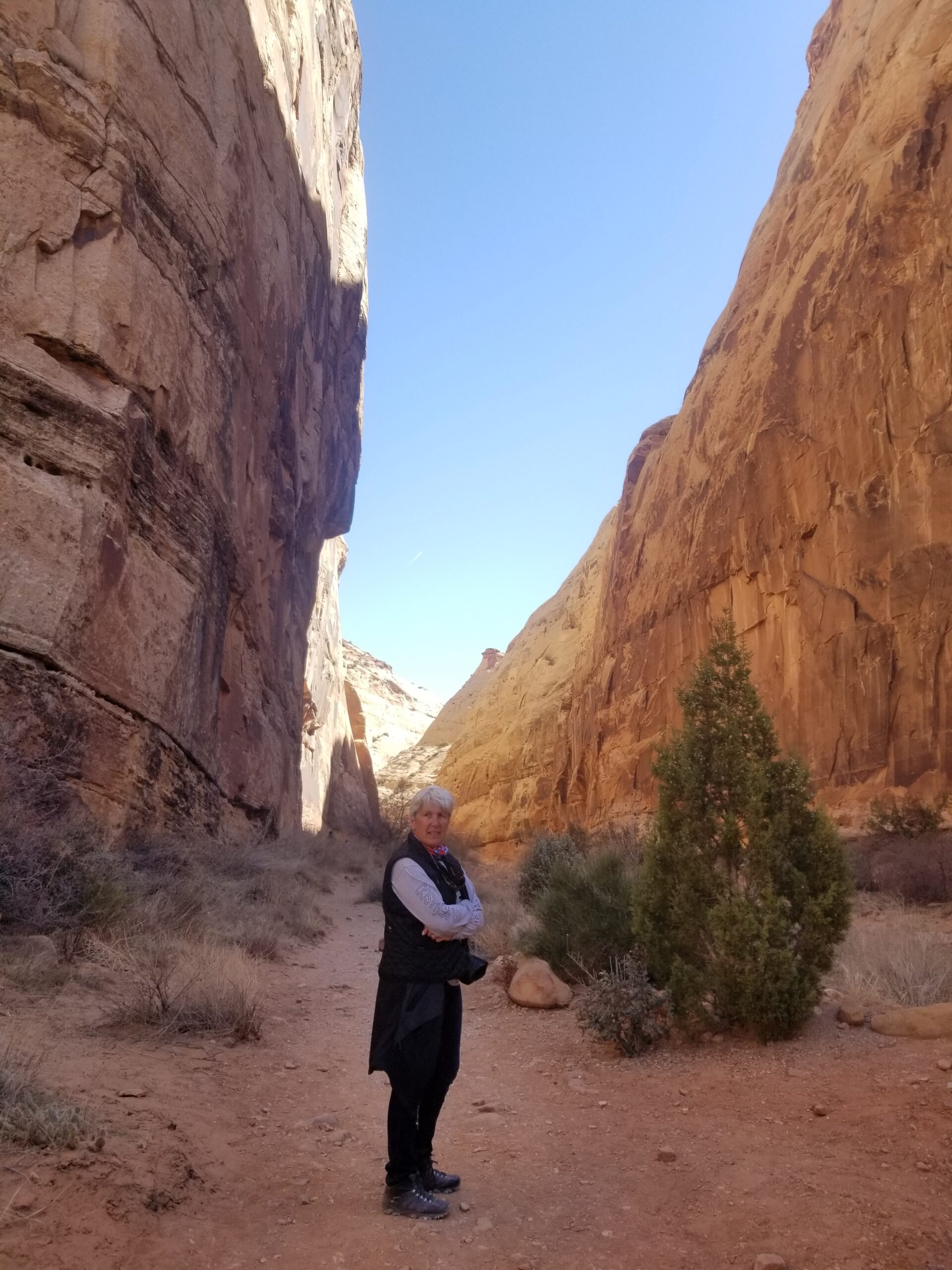 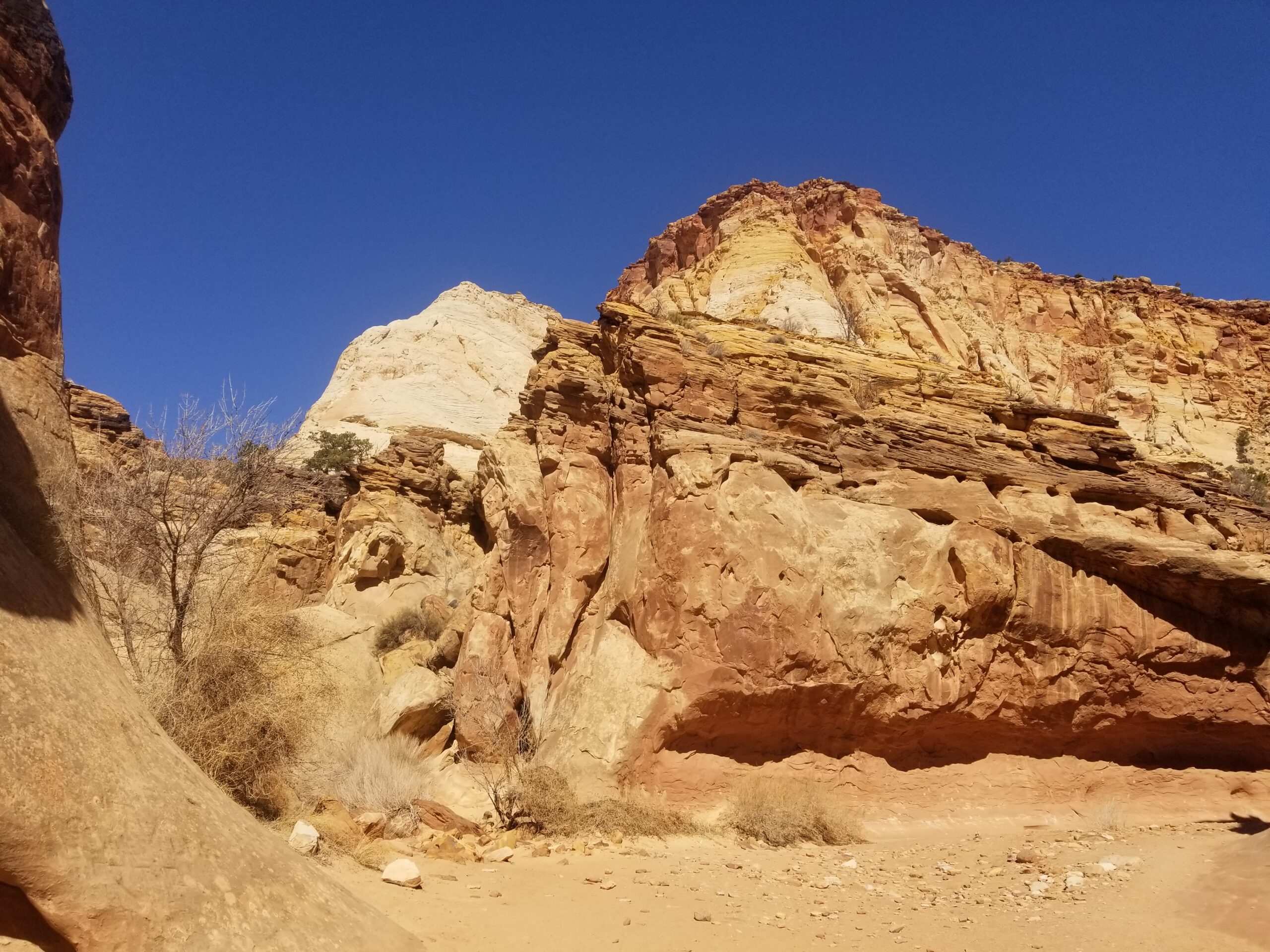 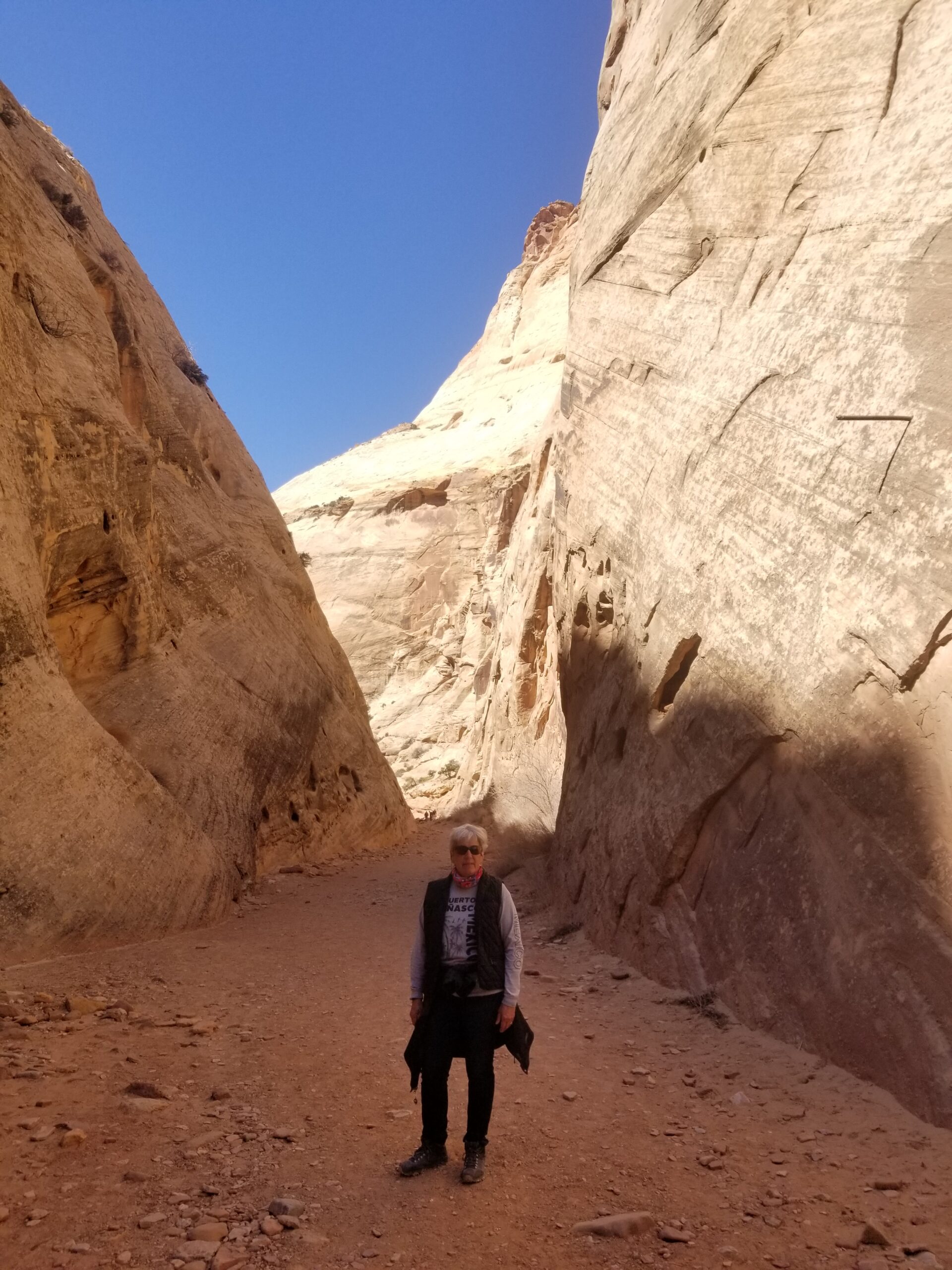 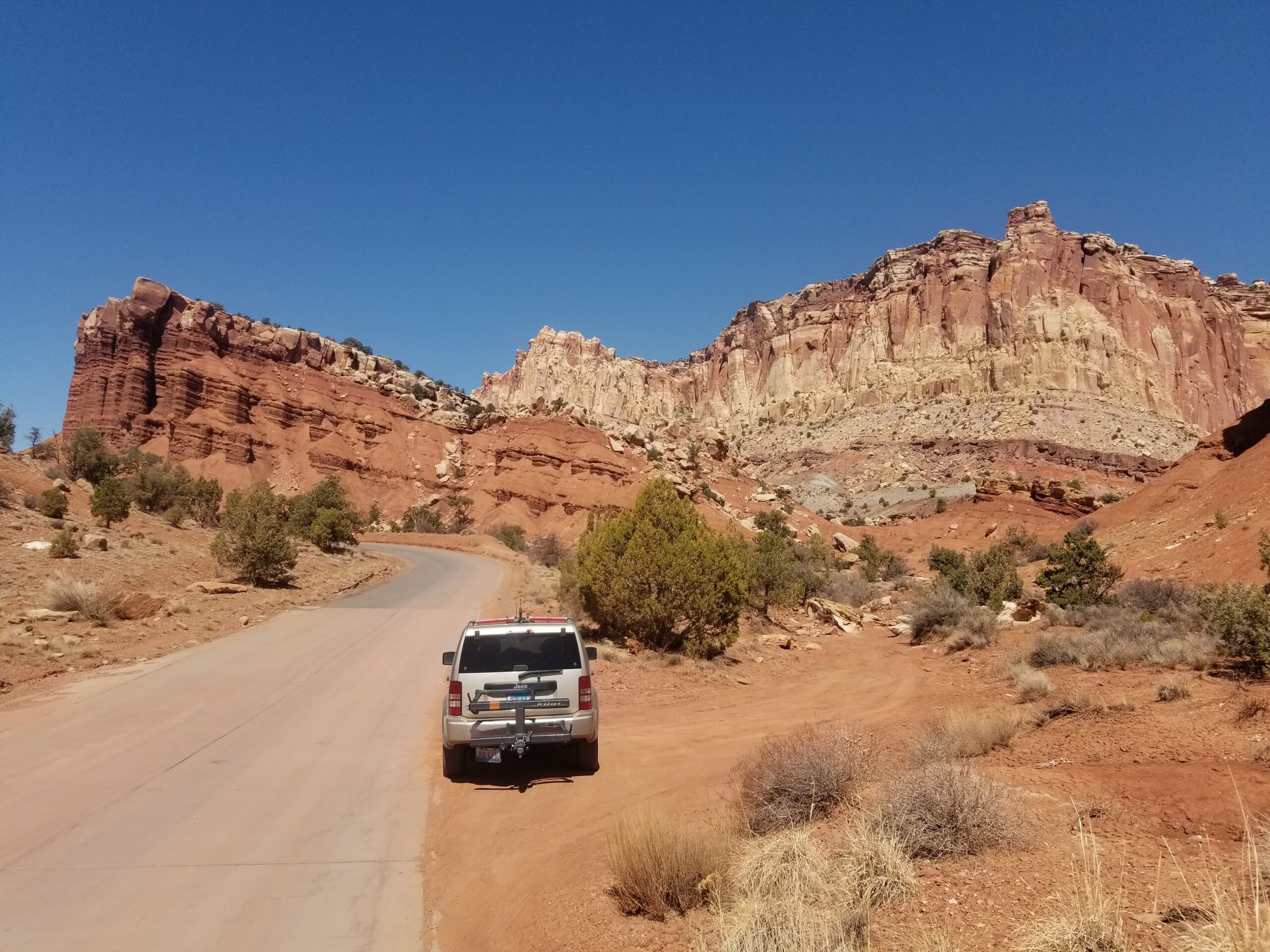 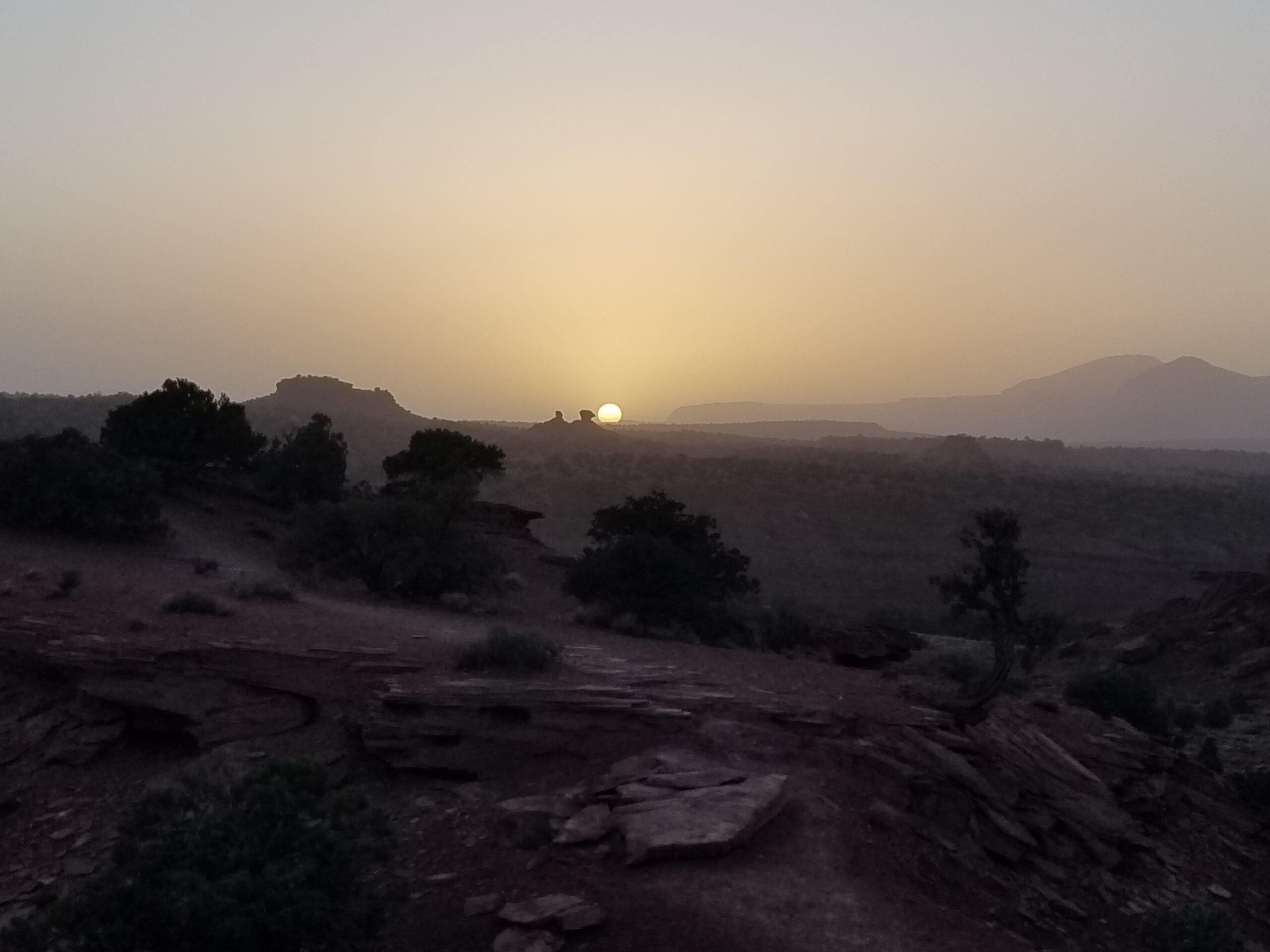 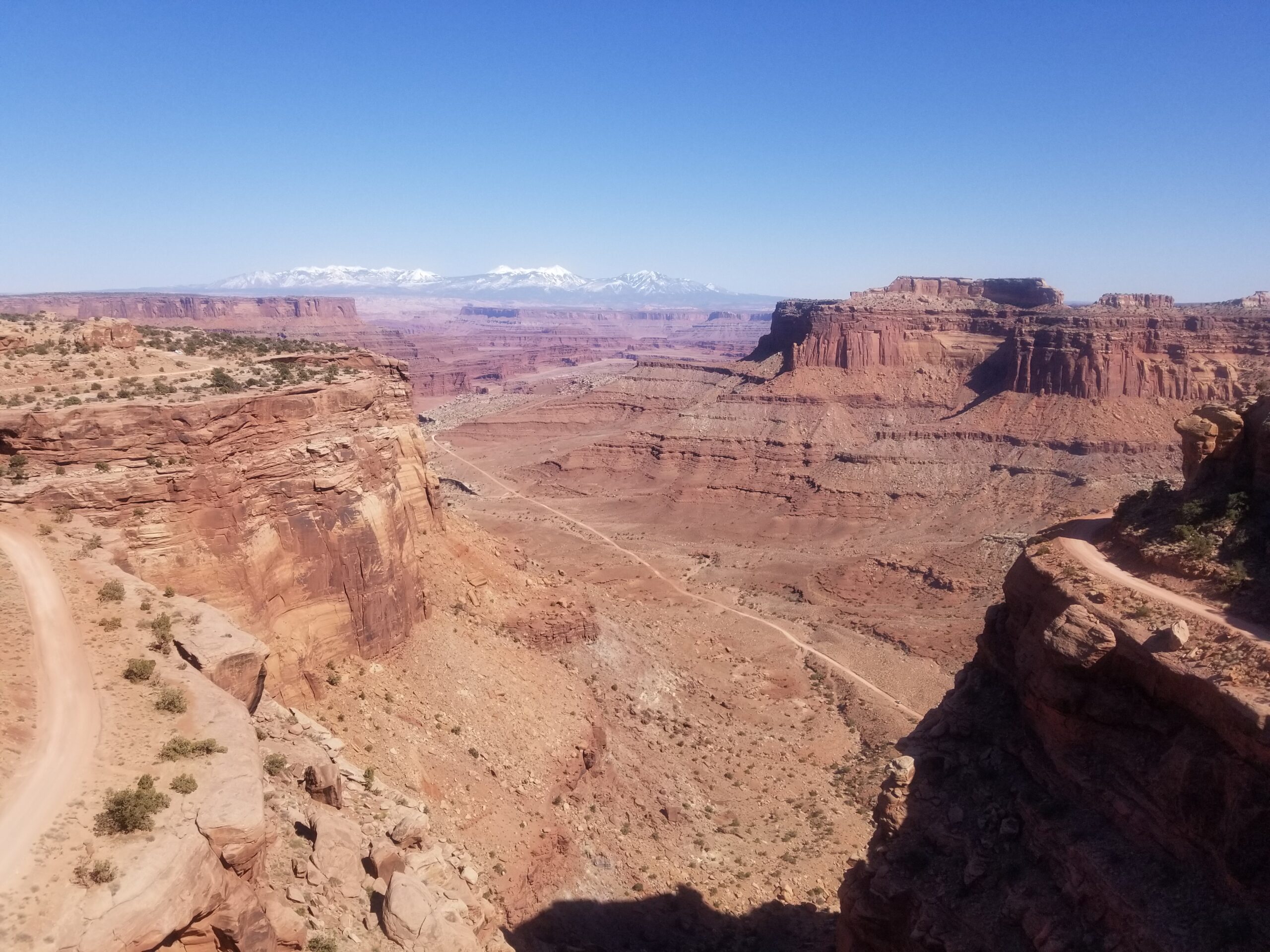 While in Torrey Utah, near Capitol Reef, we had some more “Weird Utah” experiences. First, more WEIRD FOOD. This was a little place we happened on in nearby Bicknell, Utah, whose other claim to fame is as the “Smallest Town in America with an Active Movie Theatre.” The WEIRD FOOD was “Curry Pizza.”

We chose the “Bhinda Special,” which according to the proprietor has 89 separate ingredients (none more prevalent than Jalapenos!) and was Guy Fieri’s favorite!

I don’t know (or care) about THAT, but the pizza was AWESOME.

We also needed to find an establishment to replenish some of our liquor inventory., NOT SO EASY in rural Utah. We did find the “State Liquor Agency,” a carefully-regulated building where one could acquire from a very limited selection.

I got the DISTINCT IMPRESSION that in Utah, you go in the front door seeking Wine and Rum and out the back door, straight to hell!

Inquiring more about this, we discovered that there used to be a thing called the “Zion Curtain.” This was a barrier erected in ANY LIQUOR ESTABLISHMENT that prevented the Patrons from actually SEEING a bartender pouring a drink. The intention was to prevent the corruption of innocents by viewing such dastardly activity (bartenders being very low on the righteous scale, apparently).

And, we also learned, only 3.2 Beer was allowed anywhere in the state until Budweiser informed Utah that it was no longer going to make that swill (as opposed to all their other swill, which they continue to make). I guess Budweiser is good for sumthin (if one is in Utah).

So we were looking forward to MOAB, where two more National Parks AND at least one Microbrewery Await.

(and you shall await – for the next post(s))

We made it to MOAB, where we had scammed a spot as a result of a cancellation. [su_pullquote align="right"] Compared…

A Utah Religious Experience (or two)…

We departed Zion (do people actually LEAVE Zion without being cast out?) for our Vaccine Appointment with destiny in Cedar…