Skip to content
Our friends/stalkers, Nancy and Sid were not so lucky. They had BOOKED at Cradle Mountain (months ago) so they were stuck there with horizontal rain, sleet and 90km/h winds.

Quite a powerful storm system went thru Tasmania.  It was predicted,  and we adjusted our hiking trip to Cradle Mountain accordingly.  Good thing,  too.  We learned from some backpackers as we hiked that the Snow Line was expected at 1,300 meters…which was the BASE of our hike.

Instead,  we waited out the storm at our AIRBNB in Launceston.  Power failed for a bit,  interfering with our coffee and Brekkie.  No problem,  though,  the café 500M up the hill had power,  and delicious food.

We,  on the other hand, took the rainy-time to visit a couple of other wineries and enjoy some tasty meals.   Sometimes both at once.  For example,  Josef Chromy Winery, which offered a GREAT lunch in an idyllic setting.

Over the remaining few days in Launceston,  we visited all manners of low-key, slow-going places within 100km.  The star of the show was Tasmania, itself.  Bucolic, Idyllic, uncrowded, friendly and unassuming.

Then there was Seahorse World and Platypus House.  I know,  sounds pretty staged,  but both really quite interesting.  Guided tours, both.

And,  we purchased the “Tamar Triple Pass” which granted access to not only those marvels,  but also the Beaconsfield Mine and Heritage Center. A whole day of unexpected new knowledge.   (More below pics) 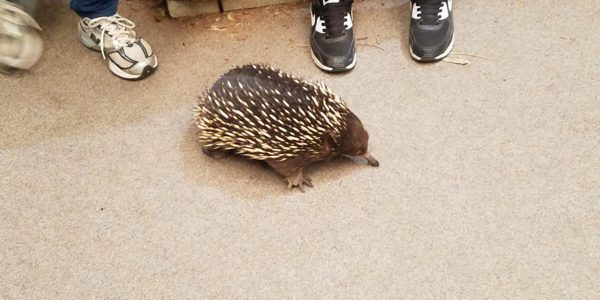 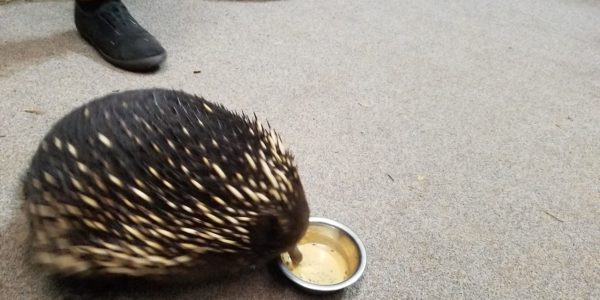 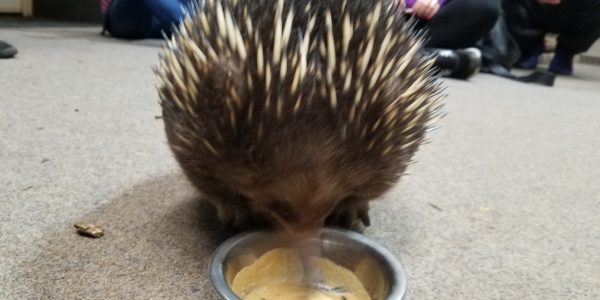 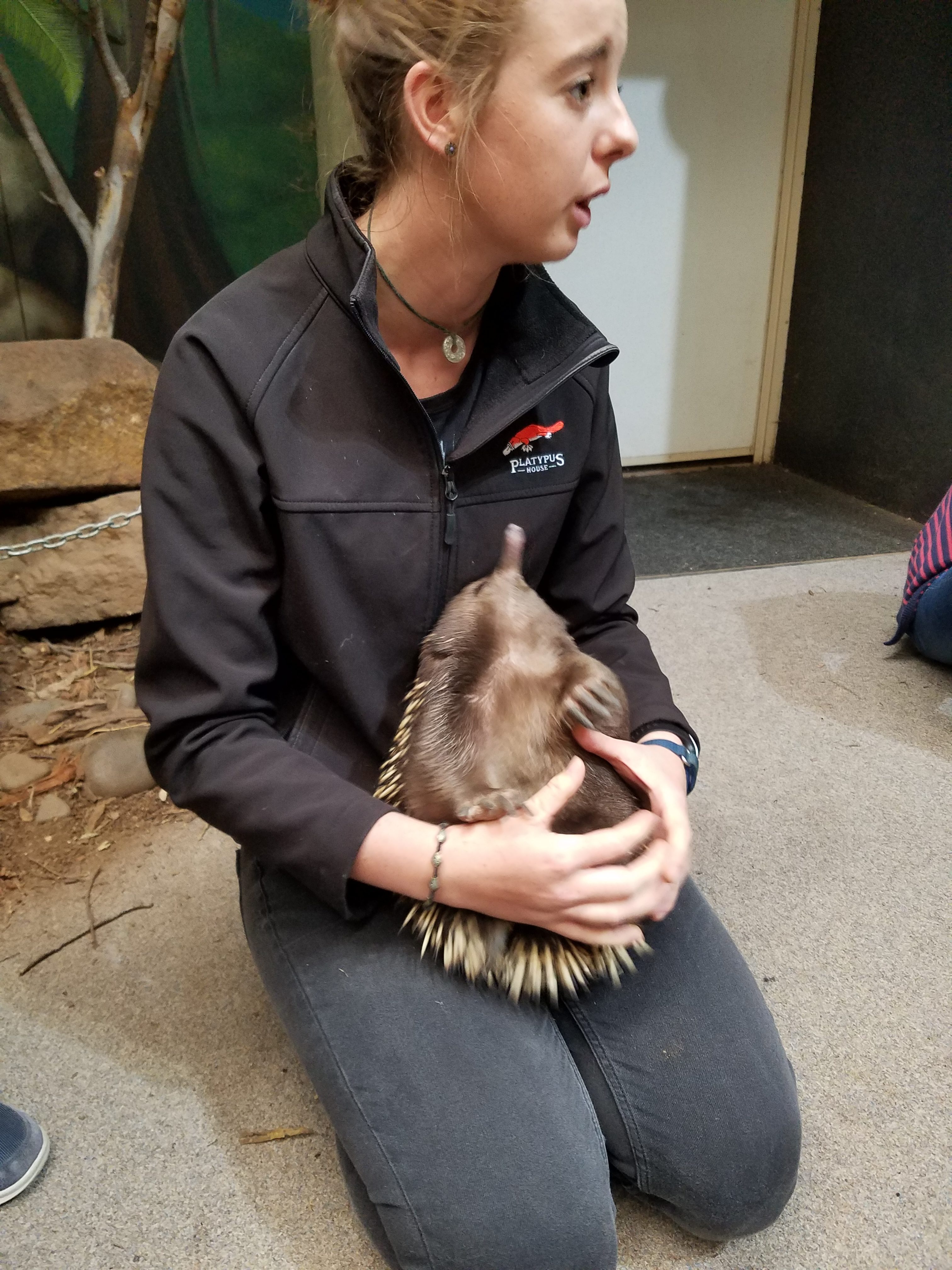 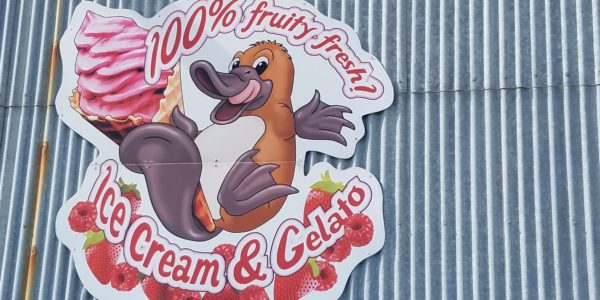 PlatypusGelato–A Place or a Flavour 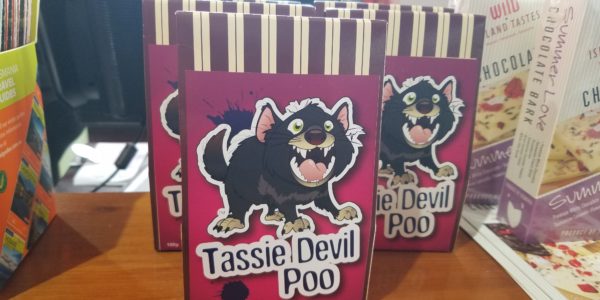 We also found some quite nice restaurants.  “Pickled Evenings” – weird name for an EXCELLENT Indian Restaurant.

We even had a second chance to see the Tidal whirlpool under Batman Bridge.  I timed our transit to be at maximum inward flow,  figuring this would give the most “whirlpool-effects.”   This was, in fact, quite true.  The straight reminded us of the “Ripple Rock” passage off of Vancouver Island.  A very narrow channel that focuses tidal energy into impressive and wild waters.   And while we were watching,  a group of Kayaks cruised by…riding the tidal surge AND under sail,  both!

It seems our plans changed since we started this trip.  Which happens sometimes,  since we don’t “plan” much.    Liz  now needed to come back to Chicago briefly for some dental work.  I mentioned the bad weather …  Since we had some down-time in Tasmania due to a morning of abysmal weather, I had some Internet Time and I could explore Booking to Chicago.

Our Flite arrangements HAD BEEN from Sydney to LA to Las Vegas, and Las Vegas was no longer where we needed to be upon arrival in the states.   I was able to book LV to Chicago separately – essentially added to the existing trip.  But, in other words,  we were making an unnecessary stop in LV.  And,  this extra layover got us home at 12:30 AM.  How to resolve?  Easy to do on Southwest – LAX->Midway, which was FAR cheaper than most other options.

UNLESS Delta would CHANGE the second leg of our existing flite booking.  I think you can see the problem.

Let me ‘splain it in brief and agonizing detail.  We have discussed idiocy with regard to governments and bureaucrats.  Now it is time to vent about airlines.

With the thunder and rain belting against our patio door in Launceston, I called Delta. They cannot “change” the second leg on an issued ticket.  For a fee, “Lee” offered to REBOOK the whole trip,  but we would probably lose Premium Economy on the Syd->LAX leg.

NO.  DO NOT DO THAT,  I told “Lee”!!!   I was hoping to finish this trip still able to walk and stand straight,  which may not be possible after 14 hours in true-economy.

“Lee” said we could CANCEL the second leg altogether (maybe even for a refund after the change fee?).  It was a sunk cost,  and I knew Southwest could get us to Chicago reasonably. So, I asked “Lee” to check it out.

“Lee” put me on hold for a few minutes,  then came back with the “SOLUTION.”  For doing this,  Delta wanted to charge us $111…EACH…no refund.  Yes,  that is correct.  They wanted to CHARGE US for GIVING THEM 2 SEATS BACK.

Now for the idiocy part (as if that wasn’t idiot-enuf…):

I said, “Will Delta Agents apprehend us outside Immigration if we walk out without rechecking?  Will they have Tasers? Handcuffs?”
He said, “They will charge you when you re-book.”

“Lee” was clearly not seeing the big picture…

So,  after that exchange I know a couple of things with certainty:

1) Airlines go to Government-sponsored Operations and Customer Service School.  It is a multinational school.  The same one Melbourne’s  “myki” developers went to.   AND

2) Southwest Airlines is a pleasure to do business with.  I have always hated their queuing-boarding procedures and general admission seating,  but they changed my LV->Chicago to LAX->Chicago without a change fee (just a slight fare difference).

Delta, on the other hand,  will never have my ass in their chair again.  Unless they are the cheapest.  Unfortunately,  that is the bottom line in air travel these days.

4 thoughts on “Wandering Around the End of the World”

← Tasmania – Far-and-Away-Fascinating ← Seafood, Roadkill and the Brotherhood of Broken Buses
Next Up

Seafood, Roadkill and the Brotherhood of Broken Buses

Our last several days in Tassie included quite a bit more travel.  Not especially far,  because Tassie is not that…