Our last several days in Tassie included quite a bit more travel.  Not especially far,  because Tassie is not that big.  Just travel in the sense that after a day of wandering,  we stopped at new places instead of returning to Launceston.   Our first next stop was in a small town on the East coast of Tassie called “St. Helens.  We again told the GPS to avoid highways,  and in addition we chose a coastal – and MUCH LONGER route.  When I say “Much” in Tassie terms,  I mean it added 50km and an hour to the travel time.  But it allowed us to stop and wander in several nice places along the way.

80km/h Speed limit!  HAH!  Our poor rental car struggled to maintain 50km/h, but the 4-wheel-drive ”Utes” (what they call pickup trucks here) flew by us.

The routes we followed consisted of several “C”-level roads.  Our friend, Nancy, had unlocked for us the secret of Tassie Road designations.  “A” roads (i.e. A1, A3) are the equivalent of divided highways or at least major 2-lane highways in the states.  “B” roads are paved, but might be rough and narrow in spots.  “C” level roads are often NOT paved; indeed sometimes barely graded. Almost not roads at all.  So at least we had some idea what we were getting into when our GPS directed us on to “C’s” enroute to St. Helens.  BTW,  Road signs said “Speed Limit 80km/h on all gravel roads…”

While staying at St. Helens, We visited and hiked a bit at several stops.  The Freycinet National Park had a trail that ascended quite a bit to an overlook that gave a commanding view of Wineglass Bay.  Which we shared with 300 or so Chinese Tourists that had disengorged from a tour bus just as we arrived.

Along the trail we met a German High School teacher on sabbatical.  She helped us out with the tourists…she said, “Walk Faster.”  She found out we were heading back to St. Helens and asked if we could give her a lift to a town along the way.  Of course we could.  She said she would meet us back at the car…she walked MUCH faster than we could.  And we had a delightful conversation during the short drive to where she was staying.

One aspect of Tassie roads that is quite remarkable – the sheer volume of roadkill!  All of it creatures we don’t see in the states,  and mostly marsupial.  Huge Possums with hairy tails,  small and medium possums, small,  medium and large Wallabies, Kangaroos, and even the occasional Echidna.  Sometimes even a carcass that could be a Wombat (or a large Possum whose tail had been amputated by whatever had hit it). And the carcasses of birds who were after a meal.  There were signs warning of Tasmanian Devil Crossings,  but we never saw one of those in the wild or on the roadside.

Once we even saw a sheep…not dead and pretty frantic as it could not figure out how to get back into the nice safe field from which it had escaped and where the rest of the herd was blissfully grazing.  It ran down the road in front of us for a few hundred yards then walked slightly onto the shoulder so I could get past.  It was going to end up squished.

It is hard to really convey the sheer volume of meat on display…I have never seen anything quite like it — even at the Paulina Market on the 3rd of July (for non-Chicago readers,  this is a great German Butcher Shop near our home in Chicago)!  Also a good reason not to drive at night,  because I doubt it would be possible NOT to impact several, and thus owe the rental car some money.

Speaking of Nancy, we travelled for most of the remaining week with our friends/stalkers, Nancy and Sid. We spent some time “arguing” among the 4 of us who was stalking whom; then we collectively decided that we’d just give in to the force and enjoy each others’ company.

I can neither confirm nor deny that the bottles of Tassie wine Sid was carrying and the several Tassie Beers in our boot had anything to do with our collective surrender.  But I can say that it was fun cooking,  eating and drinking together, with an occasional hike in between. 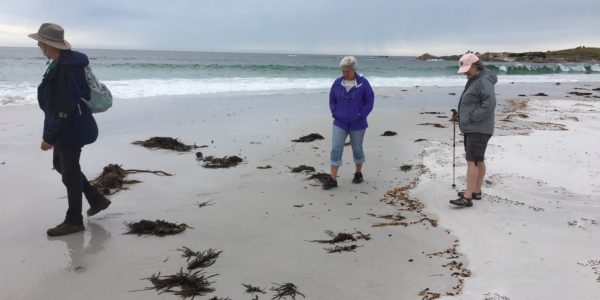 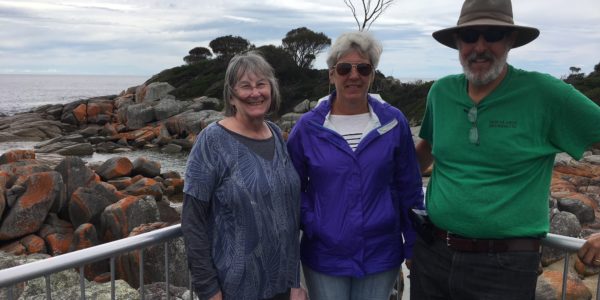 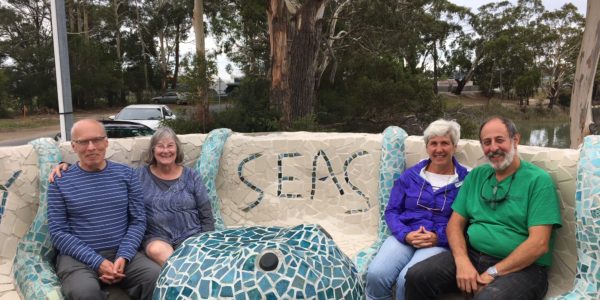 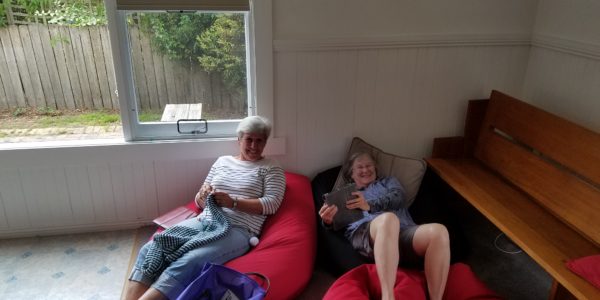 For example,  one evening Sid and Nancy acquired Oysters directly from an Oyster farm, watching them come off the boat then be shucked on the spot.

Add some similarly fresh Mussels and a Rock Lobster,  and salad/potatoes and dessert acquired by Los Harris and we had quite a feed. Other nights we had Tassie Bratwursts and Burgers,  which are definitely NOT the same as the Northern-hemisphere versions.

Speaking of “same name but not-the-same” (language is a bizarre thing!) the “Cocktail Sauce” they sell here for Oysters is the weirdest orange-colour. We could not ascertain what it actually was,  and we did not want to waste the MAGNIFICENT Oysters Nancy and Sid had acquired, so  we decided to make our own. We bought Horseradish and “Tomato Sauce.”

When we mixed them,  it became the same orange colour.

On one of our sojourns,  this time to the “Bay of Fires,”  we ran into a woman from Guadalupe (in the Caribbean, so,  practically a neighbor!)  who has been travelling around Australia for 3 months.  She had acquired an old VW Bus for cheap as both transport and domicile when she arrived;  and in the parking lot next to us the sliding side door basically fell off.  Her ride/home was no longer drivable because of this, and she was quite distraught.

It turns out she had built out the inside of this van herself, and had all the necessary tools and expertise to fix the door.   She actually just needed a couple extra pairs of hands.

At one point, Sid disappeared with the woman (blonde, 20-something, gorgeous and with a mesmerizing French accent) around the back of the bus for several minutes; Nancy did not seem at all concerned.  He was,  it turns out, getting a tour and explanation of all the features and functionality she had built in – stove (accessible inside or outside), fridge that operated off a single battery for days, Collapsible bed/lounge, storage units, water supply, etc.   I got some ideas for our ride,  too!

Anyway, the door was not of her construction,  so she was a bit at a loss how to proceed.

We were happy to provide the necessary hands, along with a couple of other women parked nearby – one from Australia and one from Germany.  Together,  a shining example of multinational cooperation in an era of divisiveness, we helped her position and then force the door back onto the track.  This was, she/we knew, a temporary repair, but at least she could drive to a mechanic to get the necessary parts.

The feeling of Déjà vu was overwhelming  —  as well one of kinship/fellowship/”Fraternity” (Perhaps a “Sorority” since 3 out of 4 members on-scene were women?).  This club can only be  known/joined by those fortunate enough to drive vintage buses, where things break/fall off/cease functioning and where you meet new people in new places as a result. Where life, adventure and broken mechanicals mix into a cosmic (and often comic), spicy salsa of life.

The rest of that afternoon, we ran into “Guadalupe” several more times.  The Seafood Restaurant.  The Grocery Store.   Enough that we thought we had another stalker.  In fact,  St. Helens is just that small. 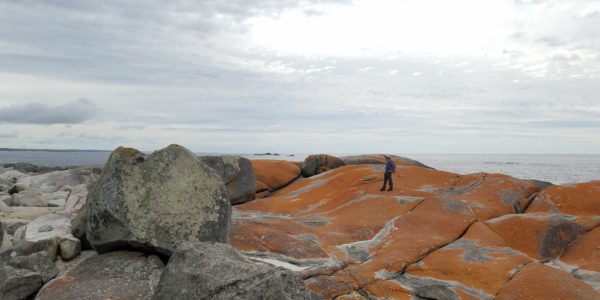 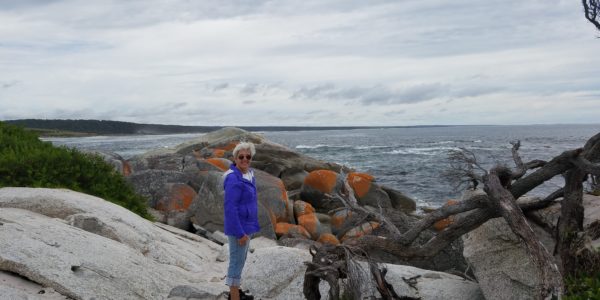 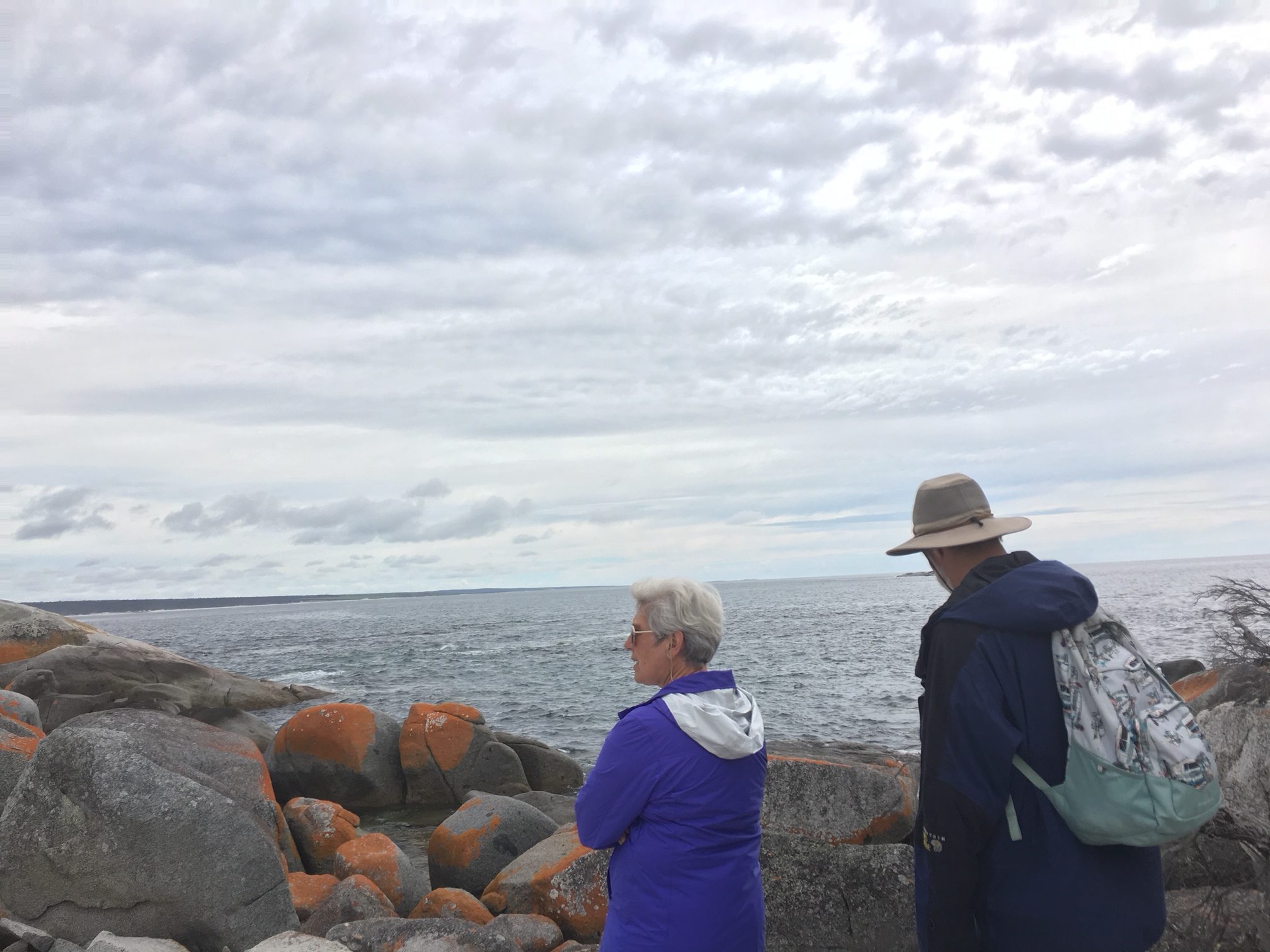 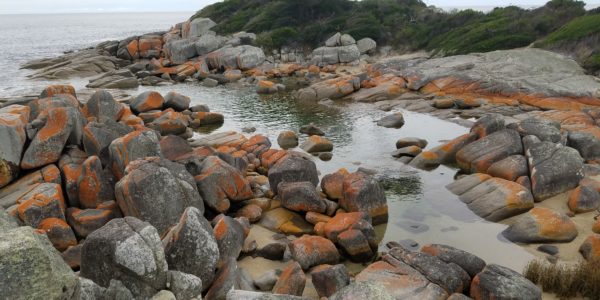 We also had yet another exercise in “Bad Timing.”  Not far from St. Helens is a highly recommended Oyster farm and restaurant.  The very MOMENT we arrived in the area,  the following Google+ Post was noticed as I called up their location in an effort to plan which meals we would enjoy there:

“Hello OYSTER LOVERS, we are really sorry but we will be closed this week (until at least 19th Feb) because the oysters have spawned and are not of high quality. Very Sad but only a short time we hope.”

The re-opening was later posted as 20 February…the day Liz and I are leaving the area. ?

Getting our "Quirk" On

Wandering Around the End of the World

[su_pullquote align="right"]Our friends/stalkers, Nancy and Sid were not so lucky. They had BOOKED at Cradle Mountain (months ago) so they…