Our next stop was the town of Seward, also on the Kenai Peninsula. This is about 90 miles as the crow flies from Homer, but unfortunately, RV WHERE YET does not fly like a crow. So it was about 200 miles, and about 4 driving hours. All of which is fine with us.

Arrival in Seward commenced our search for an RV Spot. Seward’s RV facilities are unique in all the world, as far as we know, and the story about them is worth telling.

It seems the entire town of Seward was essentially destroyed in Alaska’s massive 1964 Earthquake, including the series of tsunamis that followed. Prior to the earthquake, Seward was one of the busiest port and commercial centers in Alaska. After, there was nothing left of the waterfront!

The town decided to rebuild, but not in place – they rebuilt up the hill a ways. And they simply leveled the entire former water front and turned it into an RV parking area. Room for HUNDREDS of RVs right on the magnificent waterfront! Some spots have Electric Hookups, many do not, all are first come and first served and at modest cost.

These spots are FULL every day with RVs that rotate continuously. All of the occupants patronize Seward Restaurants, tours, fishing charters, etc. The town survives (even thrives) on this…it is magnificently symbiotic!  Imagine the vision required to pull this off by folks looking at their demolished town in 1964!!!

This waterfront RV Park is what I believe other cities should implement somewhere within easy reach of their various amenities. Here, a rotating group of hundreds of folks arrive and depart with virtually no infrastructure required to support them. They spend money and patronize cultural establishments and spread GOOD WORDS about their host city when they leave, making room for the next cogs in the economic engine.

WHY are there so few of these kinds of places in Cities? Chicago? Are you listening?

Anyway, OFF my soapbox (for now).

We pulled in at about 2:00 and found two very nice Electric sites; I paid and put the receipt and a traffic cone in one to hold it for Steve who was about an hour behind us. I parked the bus in a shorter site, and when Steve arrived, he paid for that. Then, the next morning about 7:30 AM, I moved RV WHERE YET to yet a third site that had been vacated right on the waterfront. Sweetest RV spot I think we have ever had!!!!

The park was about 3 blocks from the “Cruise Ship Downtown” where there were some restaurants including a Gelato Place. In the other direction a few blocks was the actual downtown for locals.

Have I mentioned before how excellent it is when there is an RV spot in town?

I am SURE this has come up once or twice before…

While in Seward, we booked a Boat Cruise along the Kenai Fjords National Park. We picked one of 2 days we would be in town, and TOTALLY lucked out on the weather. It was clear, sunny (after the fog lifted) and flat-calm. The next day, was windy, rough, cold and rainy – we would NOT have had as much fun on THAT day, for sure… I, for one, would have only seen the 3 square meters of ocean below the rail I would have been leaning over, if you catch my “drift.”

The cruise proceeded through MAGNIFICENT ALASKA SCENERY, and because the water was so calm, we were able to sail all the way up to the base of Aialik Glacier, which was cold and blue and tossing huge ice chunks with resounding claps of thunder into the Fjord a mere 1/4 mile in front of us.  At the end of the cruise,  the crew offered us “Glacieritas” made from some of that calved-ice.

Our cruise also included a BUNCH of bonuses (Boni?). Orcas – two separate Pods. One we were able to observe for about 15 minutes all around the boat, chasing a Porpoise. Even though the much smaller, more maneuverable and faster porpoise was, while we were watching, darting to and fro just evading the Whales, it was tiring and the whales were herding it collectively.

This was NOT going to end well for the porpoise. We did not get to see the coup de grace, but could clearly appreciate life in the food chain.

We later saw a humpback whale and some acrobatic Porpoises (porpi?) joyous about NOT being dinner, I suppose. 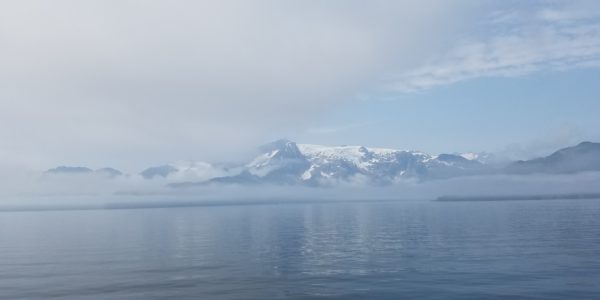 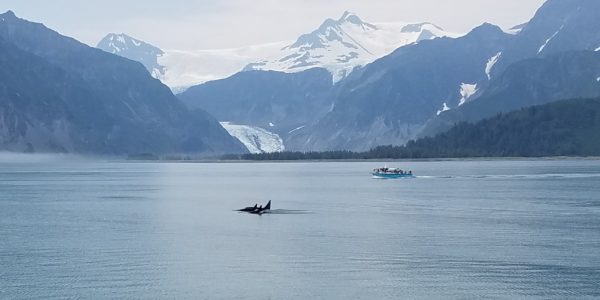 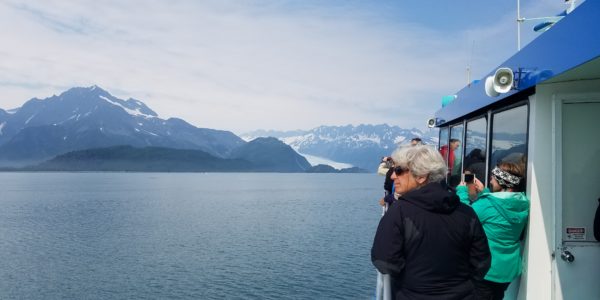 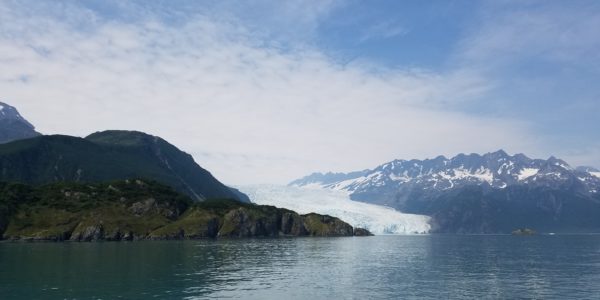 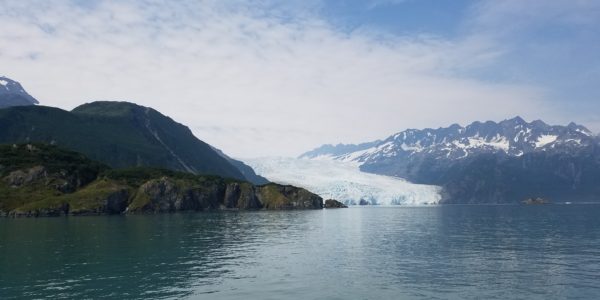 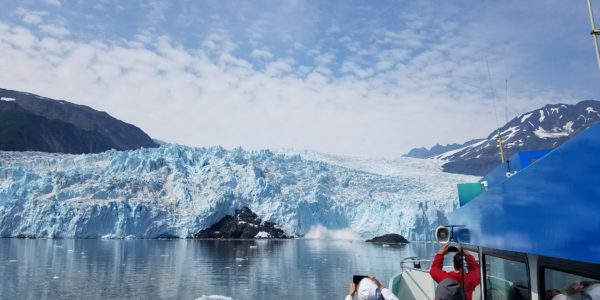 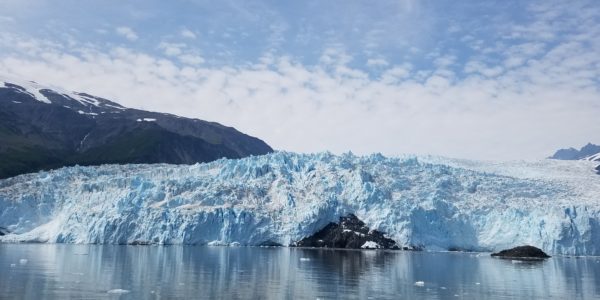 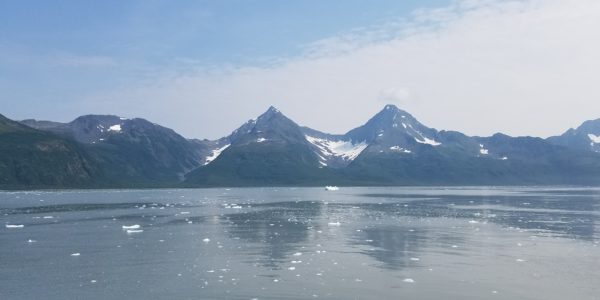 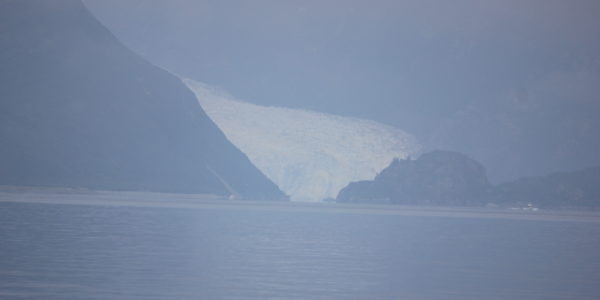 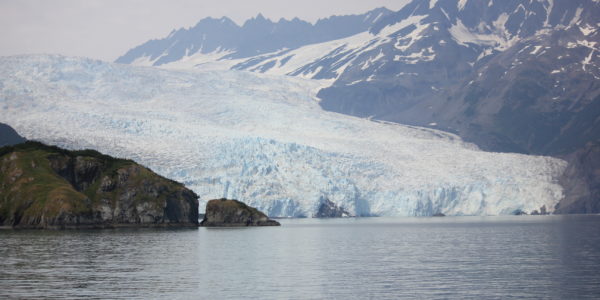 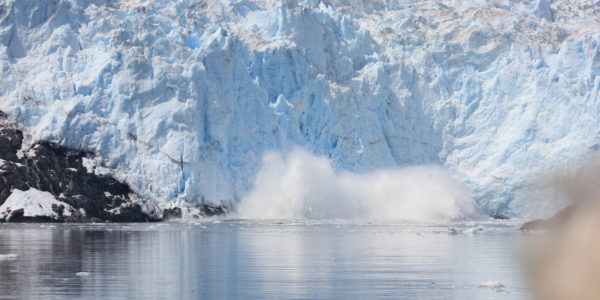 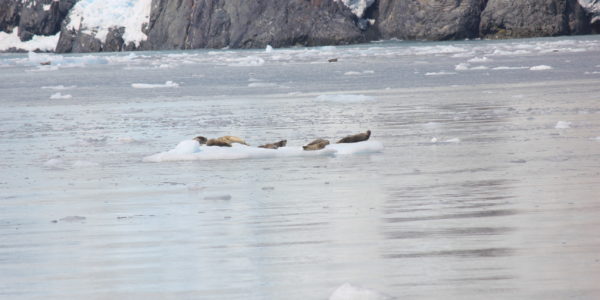 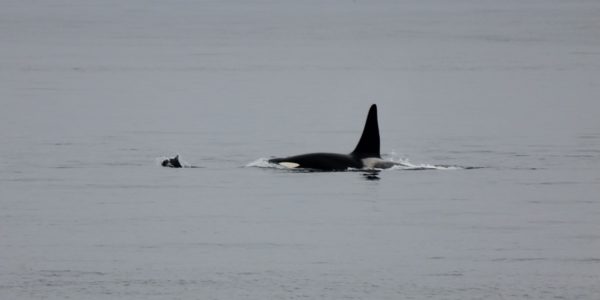 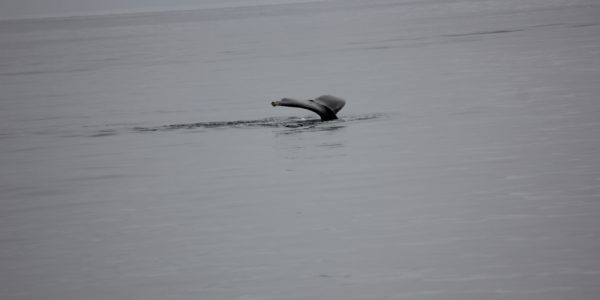 Seward was a GREAT place to spend a few days in their MAGNIFICENT Municipal Park. To put a framework on “Magnificent,” How’s this: There is an EXCELLENT BREWERY and a GELATO Place right next door to each other? Also a live-music place (average music on Tuesday night, but still appreciate the effort).

An Aquarium and Marine Study Institute. Bike trail past river’s full of the Salmon run. We COULD and DID either walk or bike for miles through the town or along the waterfront. .

We did that AT LEAST daily; but one day the experience was, well, “enhanced somewhat.”

As we walked back from the Cruise-ship area, I noted a couple walking their dog. Suddenly, I realized I recognized the dog. Then the people. Walking towards us was fellow Bluebirdbrain Randy Dupree and his better half and fellow road warrior, Carol. Now THAT was a shock, because as far as we knew, the Duprees were in the lower 48 at least, if not Florida/Georgia.

This is a WHOLE ‘NOTHER LEVEL of stalking. At least our other stalkers, Bob and Kathy Purcell, are known to be in Alaska, and since there ARE only 4 main roads in Alaska, close encounters with THEM on occasion do not rise to the level of weird. Well, THEY are a little weird, but encounters are not unexpected. Randy and Carol another matter altogether!

It turns out a small caravan had formed somewhat last-minute, and without fanfare. The Duprees, Brookshires, Shawvers and Bragdons had decided to revisit Alaska (all had done the trip before). ONLY Bluebirdbrains would (or even could) decide on the spur of the moment to drive 10,000 miles for 3 months…and they did! What a PLEASANT SURPRISE!!!

After Seward, we decided to spend a day in a National Forest Campground near a spur road to a town named “Whittier.” From our reading, there is not much IN this town, but access to it is somewhat unusual. It seems a train track was built to this port in WWII to aid in Military supplies getting to places in Alaska. This travelled through a 2.5 mile tunnel that was quite the engineering masterpiece – the chief engineer was a Kiwi, we later learned!

Today, this tunnel is still the only access, but it is a VERY NARROW TUNNEL, having been built for only a single railroad track. So, the system they use for Car traffic is: INTO Whittier one way on the half-hour. OUT of Whittier on the Hour. In both cases,  driving straddling the railroad tracks.  And traffic in BOTH DIRECTIONS is stopped if a train needs to get through.

The town itself is pretty interesting, though small. There are several LARGE buildings, built from concrete during the cold war. This was a military town; placed here because it was a year-around open-water port. These ENORMOUS and ominous buildings were barracks, supply depots, staff offices, etc. They were substantial enuf to survive the 1964 Earthquake virtually unscathed. Today, ONE of these huge buildings has been repurposed as a condominium, and virtually ALL of the permanent residents of Whittier live in this building. It has a grocery, a post office…everything one could need when there is 30’ of snow covering the town.

We enjoyed a walk around town (that was about 20 minutes) and a really excellent and fresh Halibut Fish and Chips. While we ate, we appreciated the fact that we had chosen to park the RVs on the other side of the tunnel and drive in by car for a couple hours only.

Within an easy drive of the NF Campground was another Kenai Peninsula historical site – the town of Hope. This town appeared when gold was found; Hope was originally a BIG DEAL –bigger than Anchorage! By 1900, Hope’s Gold Miners had moved on to the new strike in the Klondike.

Today, it is a historical site, and there is nearby river-rafting and salmon fishing. The town “sank” into the Cook Inlet in the BIG QUAKE, and historical mainstreet was basically moved backwards to higher ground. As the ground rebounds from the earthquake, formerly submerged main street is beginning to emerge again. But there is not enuf of a living town left to move back.

It might be an oversimplification, but it seems the history of Alaska is replete with towns that appeared due to GOLD, disappeared after gold; and in many cases all traces virtually removed by the 1964 quake.

Our next stop after Whittier is the town of Ninilchik, where the “Salmonfest” is held each year. We arrived a couple of days early, and walked over to the fest grounds to scope out the camping facilities. What we found seemed, to be polite, a little “unimproved.” Steve and I both worried about becoming permanent Ninilchik Residents once our buses’ sink to their axles in mud. You’ll have to find out in the NEXT POST if you’ll in fact need to update your contact information for us…

← Earthquake, Fishheads, Ferry Rides and Stalkers ← Salmonfest – Festival and Peripheral
Next Up

After Seward and Whittier, we travelled onwards to Ninilchik, which is a little town on the west coast of the…

Our next destination was at the very tip of the Kenai Peninsula – the town of Homer, Alaska. Their chamber…