Our next destination was at the very tip of the Kenai Peninsula – the town of Homer, Alaska. Their chamber of commerce calls it the Halibut Fishing Capital of the world; we don’t fish but imagined it as a Beach Community with NO swimming…since water temps are about 45F. There was a campground on the end of the Homer “Spit,” which is a little finger of land sticking out into the bay. This was next to the Marina, Ferry terminal, etc., and sounded like a relaxing place to spend a couple days.

On the way from Anchorage to Homer, we drove along the Cook Inlet, and the air cleared. I should say, more correctly, the wind changed, blowing the smoke from several fires in a different direction. Anyway, the result was an UNBELIEVABLE view of several mountains/volcanos across the water.

One, Mt. Redoubt, is an active volcano and appeared to have a plume of steam emanating from the top. There were multiple turnouts and vantage points, each with a view more spectacular than the last. We felt VERY fortunate to see this; Steve and Kathy followed us by a couple of days and for them the wind changed back. Steve said they could see no further than ½ mile at times.

On the way to Homer, we stopped overnight in Soldotna. There is a Large Shopping chain – like Walmart but more local, called “Fred Meyer” that has a store in Soldotna with a large parking lot. This is offered at no cost to RVs; some spots around the perimeter are even designated for up to three days of free parking!!

We found a nice spot for RV WHERE YET, and did some shopping, before discovering the BEST AMENITY EVER. Next door was a Brewpub – St. Elias. There we enjoyed a flight of beers; some really good, some not so much, but all were appreciated.

This was, in our estimation, the Best Overnight Parking Lot Ever!

Homer turned out to be a SPECTACULAR Beach place…especially at Low Tide. Possible to walk for miles around the spit; our campground situation made that easy since it was right overlooking the beach. There was also a little shopping, mostly of the tourist variety, a couple bars, and an EXCELLENT fish and chips place and GELATO. What else could you want for a few days of relaxation?

Well, funny you should ask…AGAIN, we had the pleasure of seeing our favorite stalkers, the Purcells. As we were pulling into Homer Spit Campground, also booked ONLINE but this one looked FANTASTIC, Liz texted Bob and Kathy Purcell. She asked where they were, out of (morbid) curiosity, thinking they would forever associate us with the toxic waste dump campground in Anchorage.

We finished getting situated, and then consulted with our advance scouting party about places to go and things to see. This involved a nice long walk in the 75F sunshine to the marina-ferry dock, and of course a beer at a local bar called the Salty Dawg.

Along the way, we passed several stations where people who had been out fishing were cleaning their catch. I had the idea to see if I could obtain a carcass and head of a Halibut or something to make a seafood chowder. Steve and Kathy were heading to Homer, and Bob and Kathy were already there, and the weather was great – so why not have a Pot Luck Dinner together?

Liz and Kathy asked if I had a recipe; Bob apparently didn’t care as long as there was beer.

I said, “NO, but how hard can it be? Boil a (huge) halibut head for awhile and toss in some stuff.”

I spoke with a couple of the guys cleaning their catch, and they said they’d be glad to donate to the cause, so I made a note to stick a couple bags in my pocket and return the next day. When I did so, I learned that there are asshats living in Alaska, too.

We RARELY run into “unfriendlies,” but they are out there. I asked a guy who had finished cleaning a Halibut if I could have the head, which he was about to dump in a bin. He gave me a load of, excuse the “French,” bullshit about needing a permit and not being allowed to distribute seafood he had caught without a commercial license, and about how the stuff in the bin is (had to be) recycled into the bay.

I said I would be GLAD to recycle that head for him, patting my stomach, thinking he was one of those wry, sarcastic guys and was joking.  He was not. Why was he such an asshat? He had a boat full of fresh fish, so it wasn’t about his bad luck that day!

A woman at the other end of the fish cleaning station caught my attention as I was walking away from Mr. Asshat. She said she would be GLAD to give us a Halibut head. She took this head out of her cooler – it was something she was NOT planning to toss in the bin. It may have been destined for her dogs, or for her own Fish Chowder; Now, though, she wanted me to have it. “Please enjoy it, and God-Bless,” she said. I think she was a little embarrassed by the guy who for NO REASON was working hard to sully our impression of Alaska and Alaskans.

She restored our faith in (most of) humanity (excluding one Asshat Alaskan and ALL Politicians).

I did make Fish Chowder. The Halibut head made an absolutely exquisite and delicious seafood stock, and we bought some Rockfish and Clams and fresh local mussels at the Homer Farmers’ Market. Kathy and Bob provided a dessert, and Kathy and Steve brought some of Steve’s home-made guacamole and a couple of salads. We ate very well!!!

One of our days in Homer we actually left by Ferry for a day trip to nearby Seldovia. This little town used to be the “main” town on the end of the Kenai, with shipping, fishing etc. It even had the local hospital. Over time, all of this moved to Homer, spurred on by the destruction caused in 1964 by “The” Quake and by the eventual construction of the road from Homer to Anchorage (there is to this day no road to Seldovia).

A woman on the ferry explained another reason why she thought Homer rose and Seldovia more or less disappeared: Homer is on the side of a hill facing South. This means it gets Sunlight – even during the times of the year when the sun barely ascends above the horizon. Seldovia, on the other hand, gets NO direct sunlight, and is completely dark all winter.

We spent a delightful SUMMER (and therefore light) afternoon in Seldovia. A bit of a walk through town exposed the EXTREME tidal range – all the buildings along the cove are built on stilts. We arrived at Low tide; the cove a minimal creek. We left at High Tide, the cove full to the gills around the stilted structures – about 20’ tidal range. There was also a hike to be taken, along a path where ripe Blueberries and Salmonberries were there to be enjoyed. The latter LOOK like raspberries, but taste nothing like them. Finally, we sat on a restaurant’s patio in the summer sun, enjoying a sandwich and a beer (or several) before the ferry returned us to Homer. 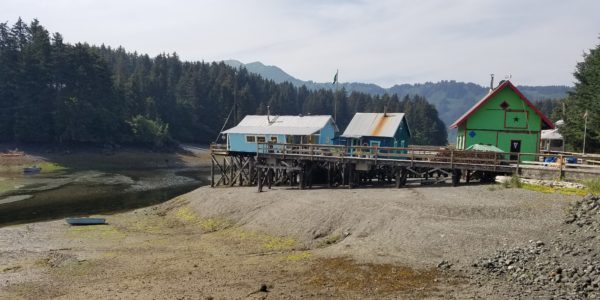 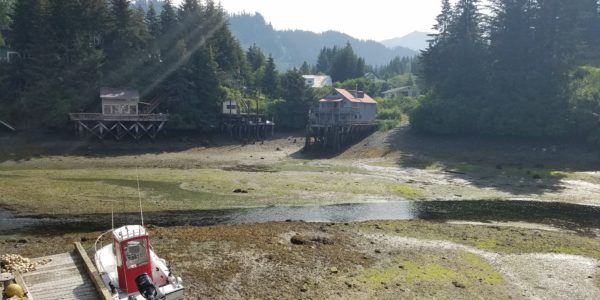 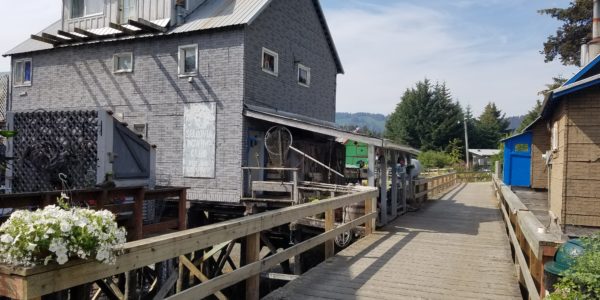 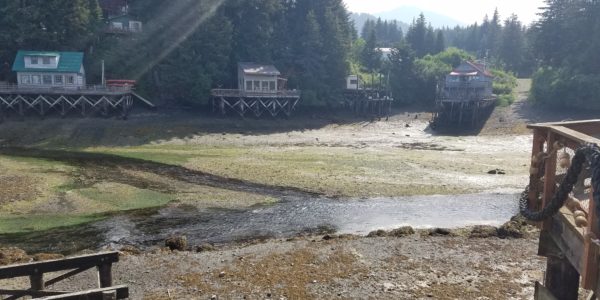 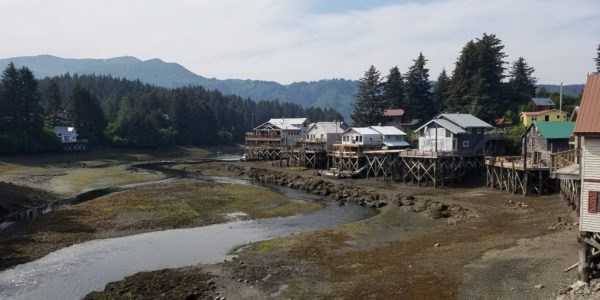 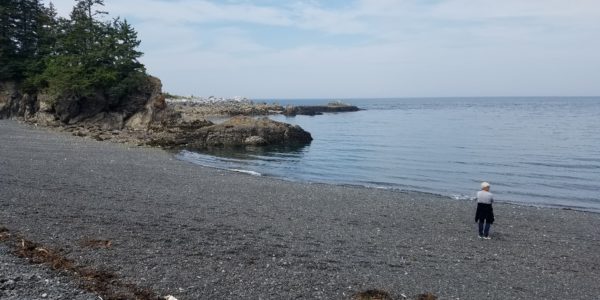 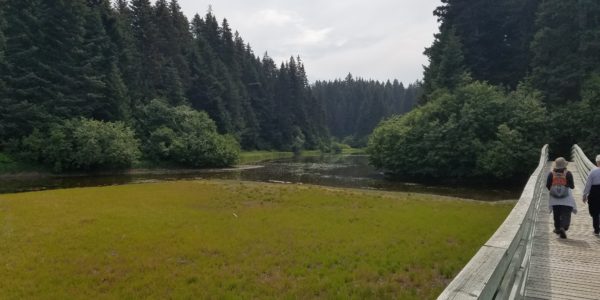 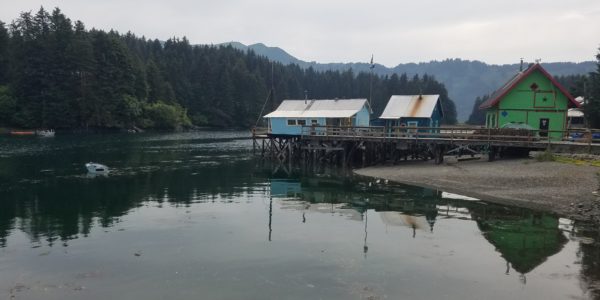 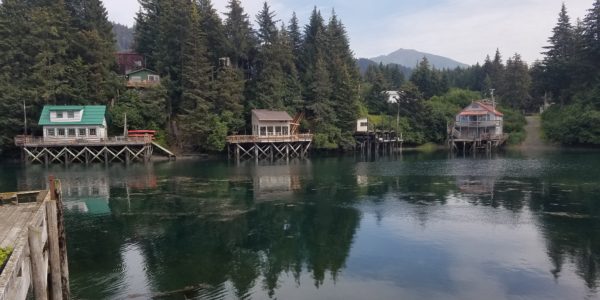 From Homer, we moved onwards to Seward and other stops like Portage and Whittier, as we “killed time” until the Salmonfest Music Festival. “Killing Time” should not be confused with “Wasting Time” as you will read in the next post.

← Anchorage…Only an Hour from Alaska! ← Seward –SWEET! Best Place Yet?
Next Up

Our next stop was the town of Seward, also on the Kenai Peninsula. This is about 90 miles as the…

Anchorage…Only an Hour from Alaska!

Our next destination was the city of Anchorage, with over half of the population of Alaska contained therein. Someone at…