For the past couple of weeks, we have been in Iowa. More specifically — if it matters, because one Corn field looks much like Another – In the town of West Des Moines.   And, see, THAT is an example of the ”Bad Rap” that Iowa suffers.

THERE IS MORE THAN CORN in Iowa!!!

For example, we were camped next to 100 Acres of Soy Beans (which Liz figured could keep the WHOLE WORLD in edamame until Steve Florer informed us that edamame and soybeans are not strictly equivalent)!! 😉

Seriously (which is not something I do a lot of these days – the world is serious enuf), our last 2 weeks have been DELIGHTFUL. In part because we have been hosted by Bluebird friends Cindy and Steve Florer. We met them last year at Quartzsite, and you may recall they tried to KILL US.

When we pulled in and saw the yellow jeep, memories flooded back and it was all I could do to keep Liz calm! It helped that Cindy and Steve were welcoming us with open arms and bushels of sweet corn, and that the jeep was parked and there were no hills, rocks or other dangerous trails within 1000 miles!

Said Corn was part of every meal for almost 2 weeks, until the crop petered out.

Seriously…The Florers live on a Farm JUST outside of Des Moines (so “just” that there is a direct bike trail to ALL the downtown Restaurant and Breweries, but more on that in a bit!) and they said we could safely and social-distantly park there whenever and for as long as we want. So, we did! Nice, flat spot under a roof, which was helpful cuz it was HOT HOT HOT and, one of our 2 A/C units (the 40-year-old one) crapped out.

We normally only ever use ONE A/C at a time, so we might have simply ignored the problem, EXCEPT: Steve has a FORK LIFT from back in the days when he ran a Seed Business, and the A/C units, while easy to replace are HEAVY. So getting the old one down and the new one up could easily be fatal, and would be immensely easier at the Florer’s than anyplace else we’d likely be EVER!

They THOT they could have a unit for us by the time the snow flies!

The problem was, finding a replacement unit, in the middle of the summer in the middle of an unprecedented, COVID-produced RV Sales binge! Called several Des Moines places, and all laughed at me – they THOT they could have a unit for us by the time the snow flies! HOWEVER, I did manage to find one in Cedar Falls, which is about 2 hours drive from West Des Moines.

It was late Saturday Afternoon when I called, and Liz and I decided we needed to get there WHEN THEY OPENED Sunday morning (most places aren’t even OPEN on Sunday, so this was an added bonus!) to be sure we got one of the three they said they had in stock. On the way, we found a DELIGHTFUL Mexican Bakery for Breakfast, and when we got to the RV Dealer, we found that the woman I had talked to had actually put aside one of the A/C’s for us. I had not asked her to, and had certainly not given a deposit. But there it was, waiting for us!!! And it was even ON SALE!!!

How many Bluebirdbrains does it take to install and Air Conditioner?

We got it back to the Florer’s, and Steve got out the ForkLift. Where we ran into the next problem…

It seems the only A/C I could obtain before Thanksgiving was a “low profile” model. This is ostensibly to reduce drag when driving — an ABSURD concept for RV WHERE YET, whose slab-front-profile would not be positively affected by a low-profile Roof-bump! Still, that is what they had!

When we got it up on the roof, I saw IMMEDIATELY that it was NOT going to fit in the hole the dead one had vacated, because of a Ceiling vent/fan directly behind it. It seems in the effort to streamline, Dometic had smashed the A/C Flat and EXTENDED IT BACKWARDS, where it interfered with this vent.

Steve and I considered all sorts of options, including installing it backwards so the back long-end faced forward and away from the vent. This might have worked, but Liz had the better solution; thus proving she DOES pay attention when I talk about Bus-mechanical issues (even though she usually pretends not to). She suggested moving the rear A/C (not low profile) forward. And installing the new A/C in the back, where there was no vent in the way.

GENIUS!!! Worked like a charm, though I had to go thru the trouble of essentially installing TWO A/C’s instead of one.  And, now Liz cannot ever again pretend she is not listening!

After the A/C replacement, we got down to the SERIOUS BUSINESS of hanging out! Which included eating lots of corn, and discussing the state of the World, IOWA and said corn.  This is where we learned about the true nature of Iowa and Iowans, from our lovely hosts. 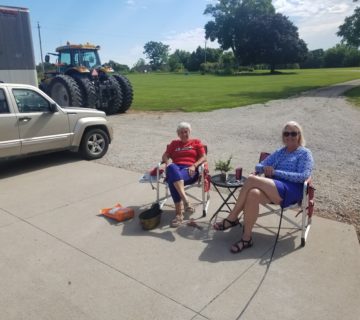 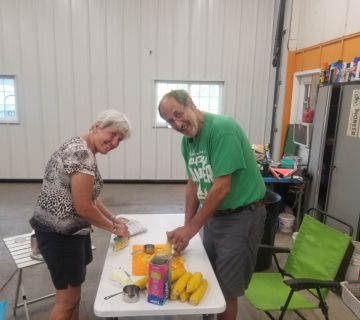 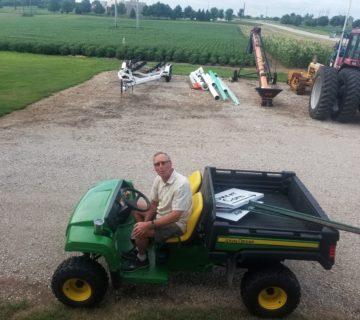 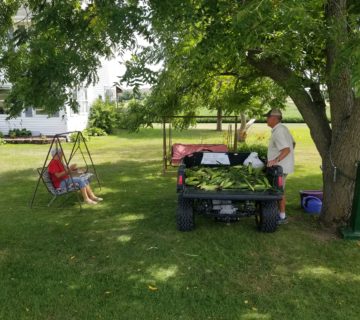 Life moves at a slower Pace, always with an eye on the corn (or beans) and the sky. Even “Fun” and romance! Steve told us about his first “real” Date with his future bride way back when. It seems they spent a lovely afternoon hanging out – IN THE CAB OF THE COMBINE Steve was operating!

Yes, Iowans seem to have a low threshold for entertainment and excitement. Steve told me what a THRILL it is to…wait for it…watch Nightcrawlers feed!

Now, my knowledge of nightcrawlers comes mostly from feeding them to fish, so this WAS interesting, actually. It seems that these critters, though blind, are extremely sensitive to vibration, so if you walk out into the field, you won’t see any. BUT, if you bring a plastic 5 gallon bucket and sit down on it just at dusk,  and be VERY still, soon the nightcrawlers will come out, even right at your feet, and begin to haul stuff to their burrows to eat. This, it seems, can become a mode of entertainment for anyone with the calmness to undertake it!!!

I am pretty sure this is what “date night” looked like for the Florers for years after Steve hooked Cindy with the Combine-ride!  Steve would neither confirm nor deny this!

I should really present the other side of Iowa and Iowans as well – it would not do to simply perpetuate stereotypes. Our hosts have spent many years helping create and operate productive farms in Africa. To this day, Steve consults with Farms there by phone or Facetime and even in person (they barely made it back from South Africa before the Pandemic locked the world down this spring); bringing a large component of Iowa sensibleness to the continent.

Steve told me how he brought clean water for drinking and irrigation to remote communities using lengths of PVC pipe only. This includes the ability to drill deep wells using pretty much ONLY PVC and manpower — WITHOUT ANY POWER EQUIPMENT. Using air, a little water and a PVC Drill head of his design that is turned by hand as it bores downward; said Water and Air  doing all the work of the drilling.

Part of this process involved recalibrating the idea of a “bucket” for use in raising water from a well. Instead of a typical bucket, which requires a wide hole, which in turn requires MUCH more effort to bore, they use a tall, skinny bucket – a length of PVC Pipe – which can be passed down another, slightly bigger PVC Pipe to the bottom and raised full of water. You can get a gallon of water from a 1 ft in diameter, 1 ft tall bucket OR from a 6ft tall, 3 inch diameter pipe; but the effort to dig and then operate a 4-inch well shaft is WAY LESS.

I also got a chance to learn about the technology of farming from Steve. Pretty fascinating stuff, beginning with the tractor, whose technology would feel right on SpaceX’s Dragon Capsule. Steve offered to let me drive – and the SEAT impressed me just getting in…self leveling, air-suspended. Then, he showed me the JOYSTICK with which the Tractor is guided. A huge beast, goosed forward by a slight touch on said stick. And the GPS-based screens for pinpointing one’s location.

My guess is that one could enjoy a multi-course meal in the cab of the tractor without spilling a drop due to the air-seat and without paying any attention to guiding it thru the fields. So, the idea of dating in the combine starts to make a little more sense!!!

Speaking of GPS, the amount of fertilizer or fungicide etc applied to the crops by a vendor’s helicopter is precisely controlled through a plan, developed online and downloaded to the helicopter’s application equipment. The results are sent to Steve’s iPad so he can SEE exactly where and how much was applied.

And, in keeping with the high (and, in some cases proudly redneck) tech evident everywhere on the Florer’s farm, we again enjoyed Steve’s Spiral-cut potatoes. I have mentioned these before on these pages;   This time, Steve presented me with my VERY OWN spiral-fry maker!!!!

This is a precision-machined spike and a highly modified (and by that I mean not modified at all) vegetable peeler. The spike pierces a potato, the peeler is installed under that and then affixed to the front of a cordless drill. Spin the drill, hold the peeler and then fry the potato strip that results. YUM!!!

Now, wherever we go, we can take a bit of Iowa with me!!!

← An Interior Refresh ← Who knew there was SMUT in Iowa!
Next Up

Who knew there was SMUT in Iowa!

So, once we became aware that ONE IKEA had what we needed in stock, we RUSHED (well, as fast as…