Once we arrived at Wompatuk, we connected with the MacQuarries. I have not seen Barry for a few years. We’ve both changed jobs since the last conference we hosted and coordinated together…Barry to a new firm and me, of course, to NO firm. We’re both pretty happy with the change – I was even a little envious of some of the stuff Barry was doing at his new firm. NOT really. Barry got a little tired of hearing about retirement’s many advantages. (“Shut up, Dan, I don’t want to hear about how uncrowded the stores are on Tuesday Mornings…”).

Barry and Wendy came to the campground for a snack and some conversation, then took us on a tour of the local area. That tour included the gorgeous Hingham waterfront, a drive down Roller Coaster Road (and the backstory behind the name) followed by dinner at a local (i.e. not tourist) restaurant with GREAT LABSTAH ROLLS, CHOWDAH and Fish and Chips.

Also some local BE-AHs (got to be two syllables in the Bahstan area). We are slipping right into the local dialect, though for some reason the true locals know we are NOT from the area. Maybe its because we weren’t crying when the Patriots finally completed their loss on the TV…the waitress looked to be making a point of taking the sharp knives away from all the ACTUAL locals BEFORE this result sank in and they became suicidal. She knew we were from away, tho…before even the outcome of the game, she asked Barry if she should give ME a knife (and if it was safe and appropriate to serve me an “adult” beverage…Liz immediately said “HELL NO”). Nevertheless, a flite of local beers appeared shortly thereafter.

To help overcome Barry’s depression at the football result, we moved on after dinner to Nona’s Ice Cream Parlor. Now some would say, and it would not be a total exaggeration, that our travels are organized to move from Ice Cream place to Ice cream place, with some occasional sightseeing on the periphery. That would be a COMPLETE misrepresentation of our priorities – UTTER FAKE NEWS. In fact, there is an occasional Brewery or Winery tossed in between Ice Cream Places!!

WOW…that was good!!! I always knew that Barry was reliable with regard to Ice Cream; even if we barely speak the same language despite our predisposition to tech, we DO share a belief that ice cream would, if provided to combatants everywhere, produce world peace. So we knew walking in that Nona’s would not disappoint. Nona’s now ranks high on our international list of dairy delights. THANK YOU, BARRY AND WENDY!!!

After we departed Wompatuk, we headed for Cape Cod. There we have almost 2 weeks of fun on our plates. First, visiting friends from previous lifetimes who now live on the Cape, followed by our first Bluebird Rally of the fall.

I’ve mentioned previously that we are Rally-hopping down the east coast this fall. Once we realized that these roving bus-parties (not unlike Newfoundland Shed Parties, I suppose) were arranged like a string of beads along our path southward, our lot was cast!!! And, we have friends and/or relatives near each Rally-point, so an excuse to catch up with old friends (like the MacQuarries) coupled with a chance to meet new friends.

First stop on the Cape was in Dennisport, which is a small town conveniently located pretty near Martha and Bill Philbrick. The Campground is in an AWESOME location; right across the road from the Ocean. Friendly. Convenient to the main thoroughfare, giving us quick access to the rest of the Cape and to the Philbricks.

No Charge for guests…as long as the camp host was invited to cocktails also!

After checking in, the Philbricks came over to “our place” for a snack, followed by a home-cooked meal at their place. The campground has a rule: $5 entrance fee per guest – many campgrounds do this to mitigate lots of unregistered guests using their facilities. I wanted to settle that charge before Martha and Bill arrived, but the lady in the office said if they are only coming for cocktail hour it would be no problem – as LONG AS SHE WAS INVITED, TOO. Of course I said “No Problem” to that!

HAIR VOLUME; what did you think I meant?

We have known the Philbricks for many, many years – I think since 1996 — and have embarrassed ourselves together all around the world. Nothing much has changed, other than our collective hair colour and volume.

Note: I will continue with the Canadian spelling of certain words because we had SO MUCH FUN in exceedingly-friendly Canada this summer; so much so that Gera Chandler has decided we have achieved “Honourary Canadian” status. She pointed out that this honour could be withdrawn at any time, and she would be following our blog to be sure our command of the language did not lapse. She said the honour could be restored if we simply said “Sorry” like a Canadian would.

She probably meant that as a test – I think the Canadian spelling is “Sourry!?”

We spent a couple days with the Philbricks before heading farther up-cape to the Rally. During that time they made sure we saw some local scenery, ate some local food and ESPECIALLY appreciated some local culture. This included of a mix of local restaurants, seafood, lobster, Martha’s DELICIOUS Cacciatore and Bill’s AWARD WINNING CHILI. Yum! 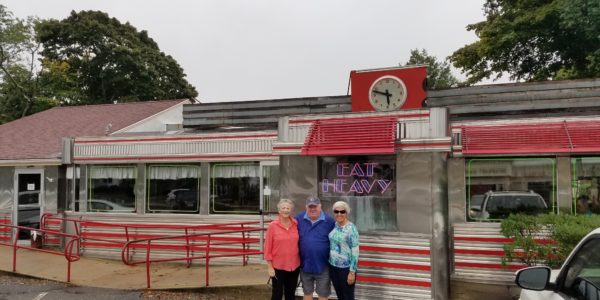 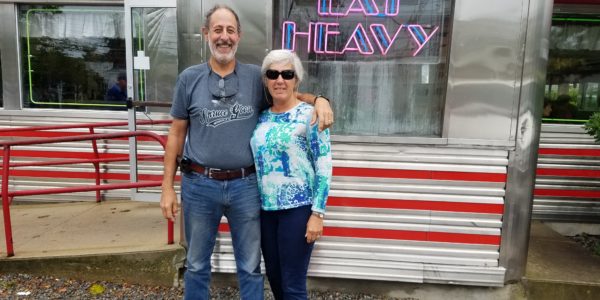 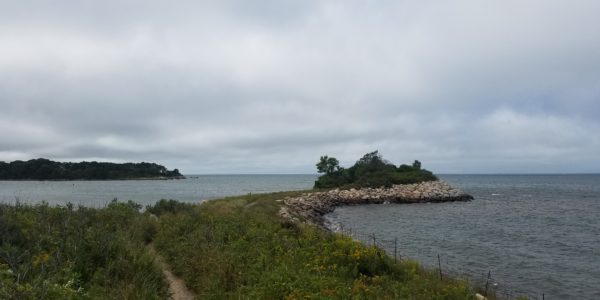 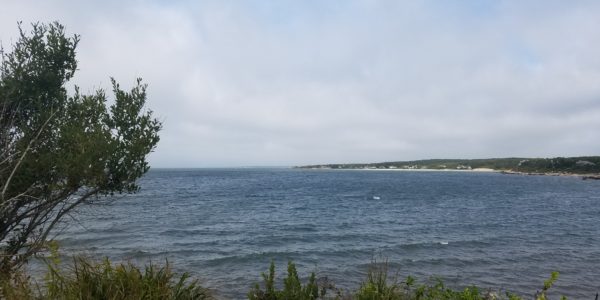 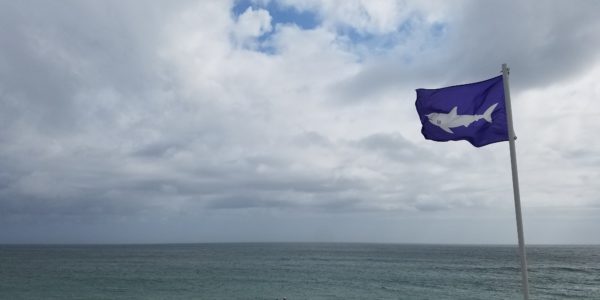 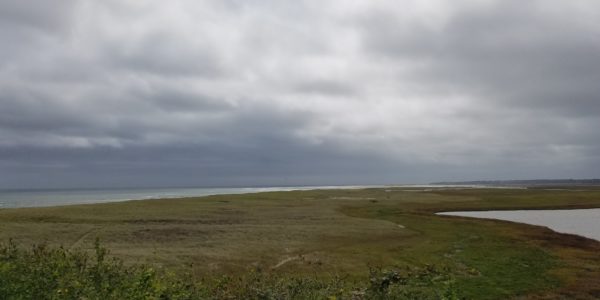 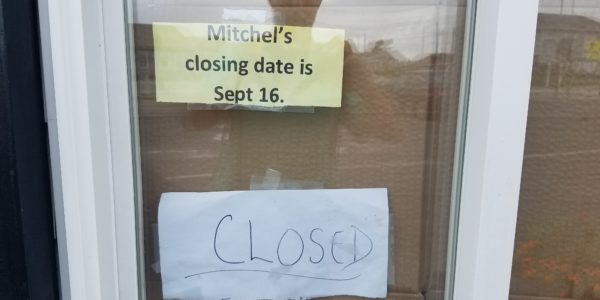 The culture-experience included an absolutely charming and special evening of music and entertainment at the “Chatham Fiddle Company.”

The CFC is really the home/livingroom of a local musical institution. Not room for more than 30 people. Two sets of music separated by Brown Bread baked by Eugene, the patriarch, and with Crapple made by John, the bass player. Brown Bread is obvious, but Crapple may need some explanation. Unfortunately, I cannot give one – it was delicious…a sweet jelly. Possibly with molasses, possibly with Cranberries (John is, apparently, a Cranberry Farmer). Possibly with both.

As we travel, we have been enriched by many incidents of unexpected hospitality and warmth; here was another.

At one point, we visited a beach frequented by tourists, seals and White Sharks, though when the latter are spotted, they are usually given the beach to themselves. The picture we took there ended up with the following caption on Martha’s Facebook Page: “Bill and I Asked Dan to go for a swim. Enough is enough!” Pretty sure she was joking, but you can never really be sure with Martha and Bill, whose outspokenness and humor is widely known and mostly admired. Since the swimming-invitation was followed by another full day of fantastic hospitality, I think we’re good!

After wearing out the Philbricks (Really! Though she said this was a long-standing appointment, It cannot be an accident that Martha was seeing her cardiologist the day we were leaving!), we headed farther out on the Cape to Truro, where the rally was scheduled. We “planned” this to arrive a couple days early, so that we could spend some time with Arlene Arado.

As we moved over the summer in this direction, we had contacted Arlene, who used to live on Magnolia in Chicago. By recently I mean within the last couple years. By lived I mean for about 50 years, and her late husband’s family built the building and lived there before that!!! A significant part of Magnolia history!! We knew she had moved to the Cape – we and everyone on Magnolia have TOTALLY missed her in the ‘hood, so we wanted to see her and catch up.

Little did we know that her new home was basically around the corner from the Rally location at the far end of the Cape!! Despite knowing about our impending arrival and proximity, Arlene stayed home …she certainly could have used the advance warning to seek shelter elsewhere before Hurricane Harris arrived!

Once we made contact, it was agreed that we’d pop over to her home, then take the bus to Provincetown. We’d drive, of course, but three in a Smart Car would certainly require duct tape (and points out one of the reasons the Smart Car Phase of our lives is drawing to a close). The bus turns out to be a great option for this trip. Straight shot, no parking in P-town required. $2 regular fare for my child bride and $1 senior, which I am, again, at 60.

Arelene gave us a local-eye-view of Provincetown, which has its full measure of tourist shops, restaurants and bars; but after labour day the crowds are just gone. No problem walking around, sitting down in an open-air restaurant, etc. In another month (right after halloween, which is apparently BIG here) almost everyhting will be closed. For whatever reason, P-Town has always been a safe place for the LGBTQ (I think I got all the right letters…) community; and the inclusiveness of the town is graciously shared with those from away – at least after Labour Day…I cannot say what wall-to-wall tourists would feel like or impact on the graciousness. But for us, P-town was magnificent, open and welcoming even at the tourist bars.

Lunch was at a little storefront off the main street called “Box Lunch.” A Deli counter, invisible from the street but well known to Arlene, making fresh sandwiches. Liz and I split a “Gilded Big Daddy,” which somehow translated to a Lobster-salad wrap with cheese and avocado – DELICIOUS!!!

Liz then walked in to Arlene’s Hair-cutter and had this done – she still has to attend to this matter professionally. I have long since stopped going to the barber – Liz just shaves my head with a #5 clipper.

We all make sacrifices to our financial reality! (Liz amuses herself for HOURS and HOURS with a $2.75 ball of Walmart Yarn).

Later in the afternoon we stopped at a bar that had several craft beers and a local delicacy they called “Chowder Fries.” This was basically Clam Poutine, a technique for presentation of carbohydrates, fat and salt with which we are more than expert having traversed the poutine-heartland of Canada. And, the Cape Version was AWESOME!!!

We visited the P-Town Library, which has a ½ scale Fishing Schooner in the atrium – built in place by a master shipwright. We wandered past art galleries, old houses, new houses in old style…then Ubered back to Arlene’s place. The next day we took the bus back to Provincetown for Breakfast, people-watching and the Farmer’s market. Then we had Arlene over for a picnic at RV WHERE YET, and continued reminiscing. 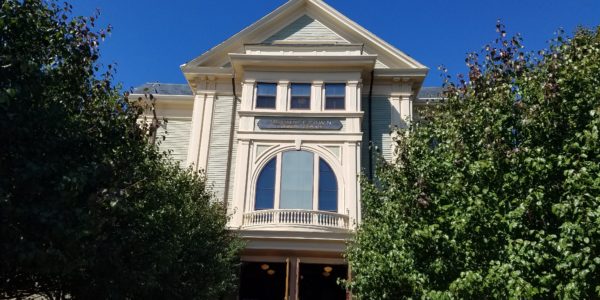 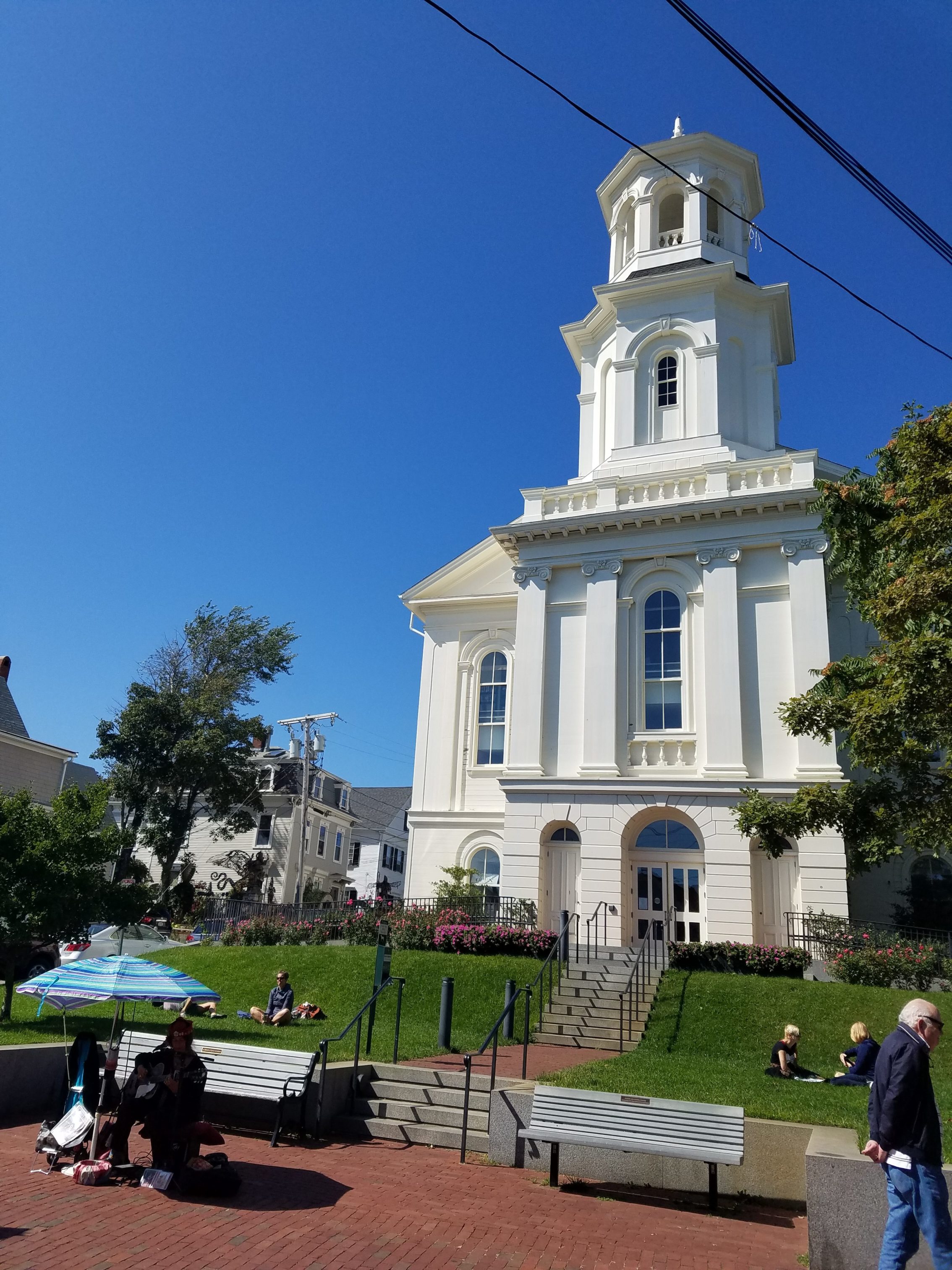 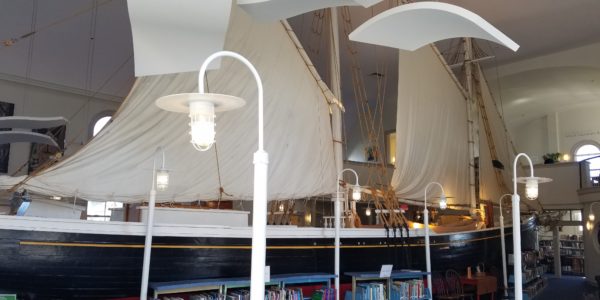 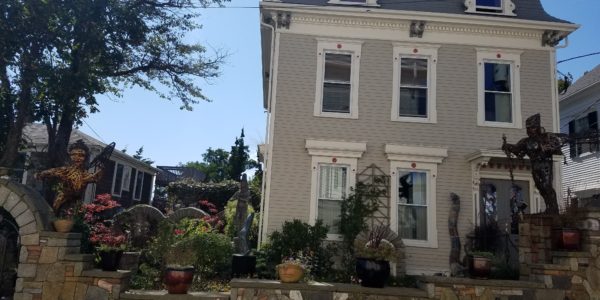 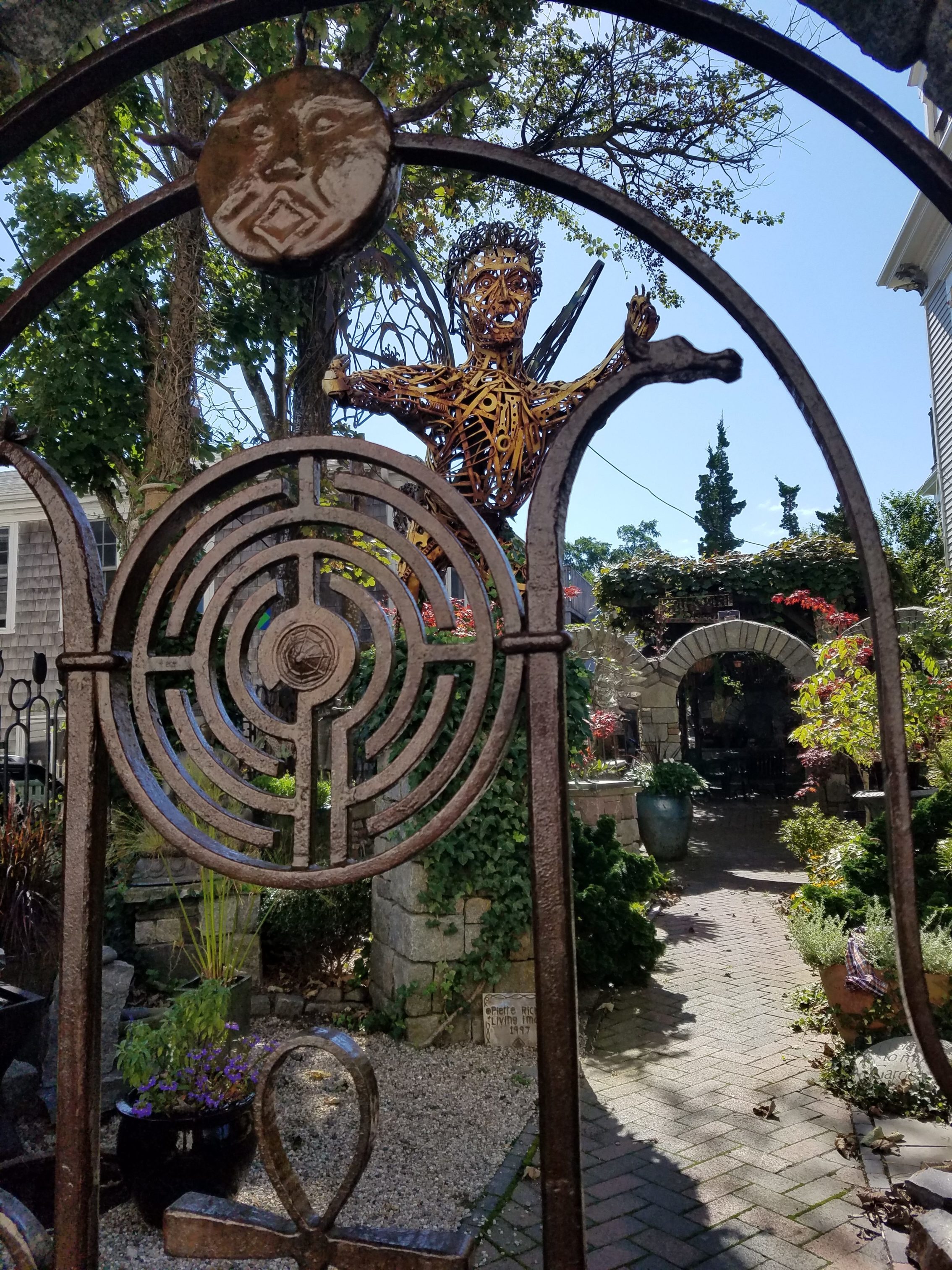 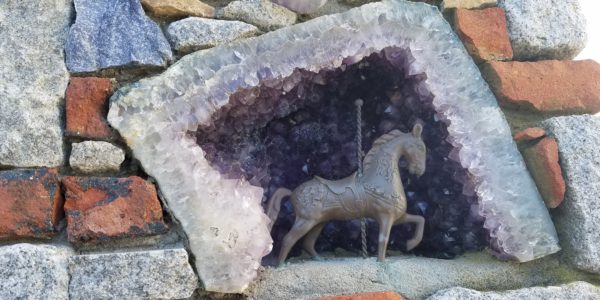 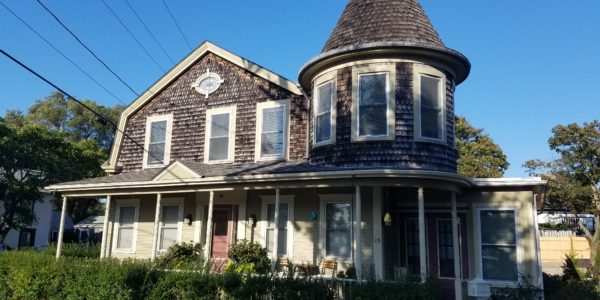 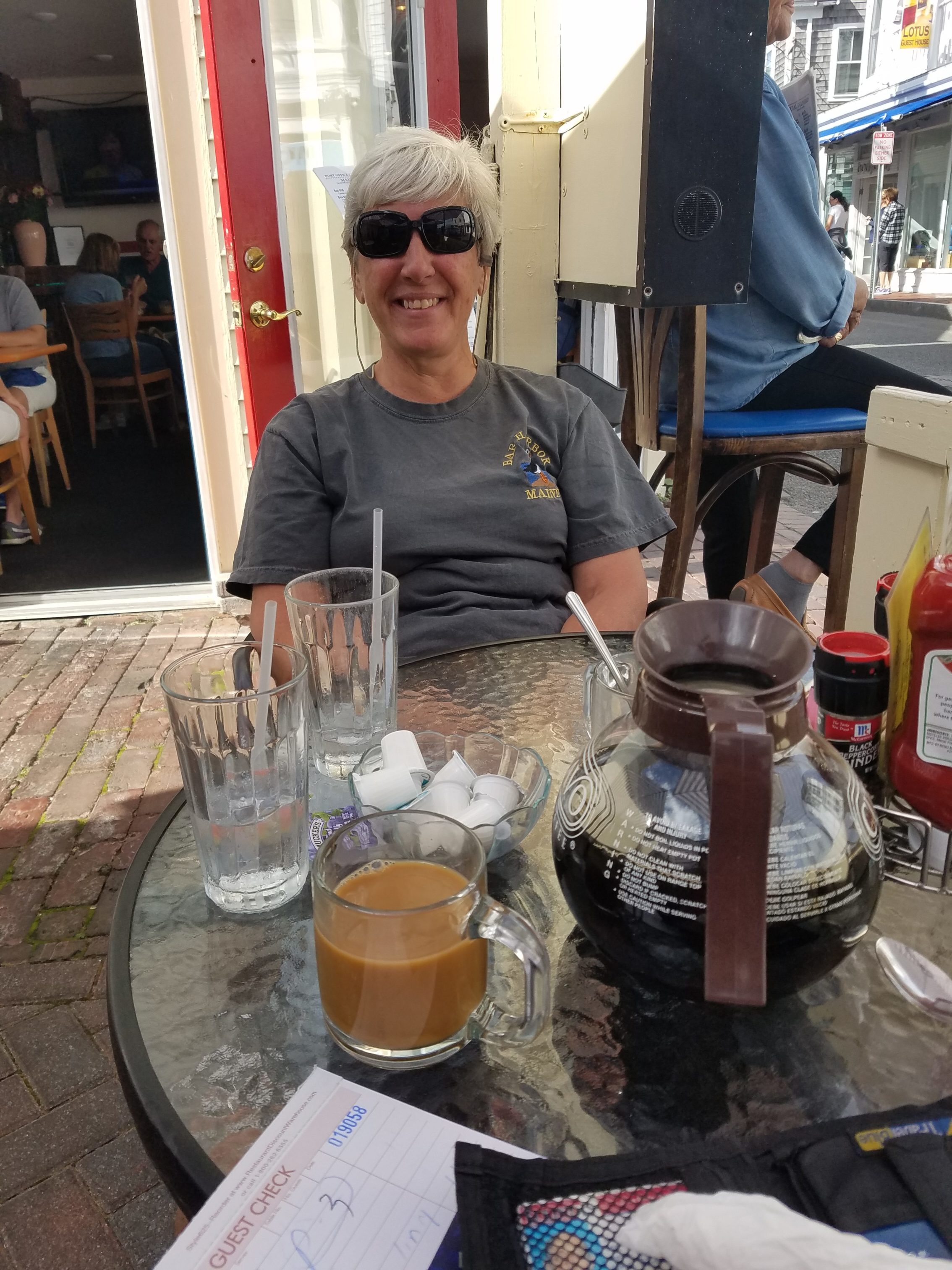 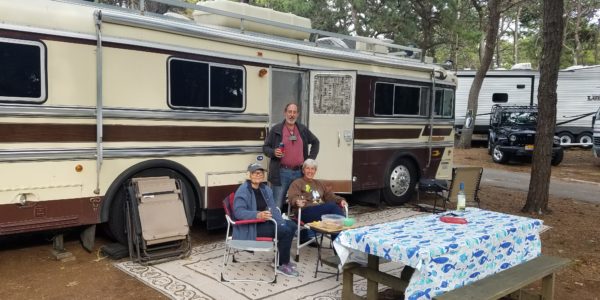 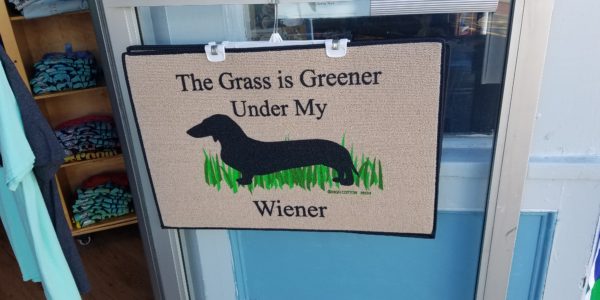 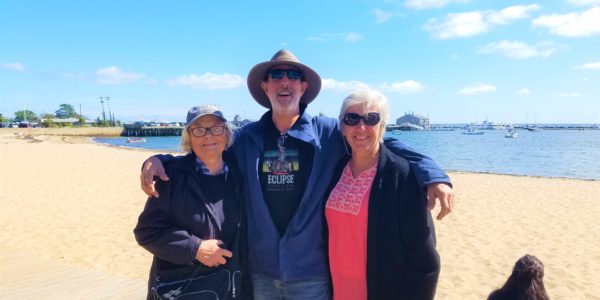 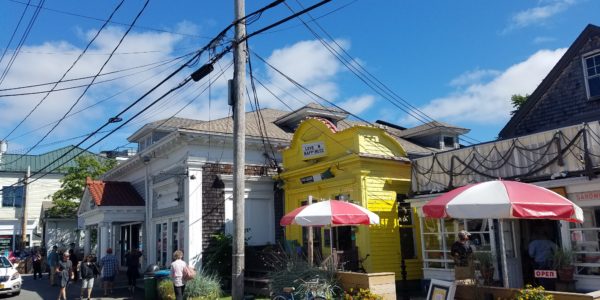 The RV park at Truro was older, and the spaces, while large, had lots of trees around them. This made it quite a challenge maneuvering the bus into place. During the process, we collected an audience of onlookers. I am not sure, there may have been a pool…an over/under on the number of dents in the bus/tree limbs snapped. In the end, NONE and NONE. All I could think was that we were probably the smallest Bluebird coming to the rally and WE had difficulty, so we would be sure to join the gawkers and enjoy the spectacle of all our fellow Bird-brains as they attempt to dock their vehicles in the forest!

After the flock collected, the Rally commenced. As always, the first official act is for someone’s engine compartment to be open; rear-ends of a certain age the sole evidence of the mechanical discussions going on.

Other formal “planned” activities included an evening at the Wellfleet Drive-in Theater, a Ferry to and day at Nantucket, a Clam Bake and more. It’s hard work relaxing so thoroughly. We might need a vacation, soon!

4 thoughts on “Ice Cream and Ex-Magnolia”

Our busy (?) rally schedule has started. The first one was on Cape Cod, where there was a gathering of…

[su_pullquote align="right"] OBVIOUSLY, we are mobile, and can change our course and our plans to avoid danger.   [/su_pullquote]…