Moving onward and upward from Irmo, SC., we decided to make a stop in Charlotte, NC. One of the fastest growing US metropolitan areas, and with an RV Park well within the city limits, we decided a few days of urbanity would be just perfect for us. Elmore’s RV Park is a weird little place with mostly permanent trailers and a few transient spots. But, it’s a $10 Uber ride from the epicenter of Charlotte!

Literally! There is a shopping mall called the “Epicenter” downtown. Which they call “Uptown.”

Day one in Charlotte was RAINY to the max. We decided that a visit to the NASCAR Hall of Fame and Museum (which, of course is indoors!) would just about complete our Southern orientation, so off we Ubered!

We were actually pretty impressed with the museum, given that we did not know thing-one about NASCAR going in!

The museum was practically deserted, but VERY informative and fully staffed with folks wanting to convert us to that most southern of religions.

There were several videos that told the history, from Moon-shine runners to full-on international celebrities. Some focus on the seminal meetings, among said moonshine runners who sensed an opportunity to bring their weekend hobby races to a bigger audience by formalizing rules and standards.

Amazing that a single meeting of visionaries in a small Motel in Daytona Beach resulted in an international behemoth and cultural phenomenon!

Several exhibits walked us neophytes through the changing technology. Today’s cars are high-tech and bear little resemblance under the sheet metal or above to the “Stock” cars from when they came. But earlier cars still had the same upholstered seats and trim that could be ordered from your local dealer! One exhibit was particularly interesting – a car cut in half – one side the modified-for-racing version and the other the off-the-shelf version. 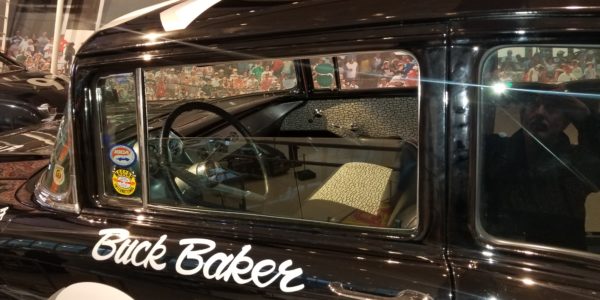 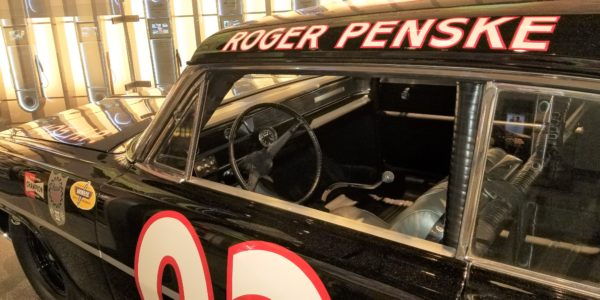 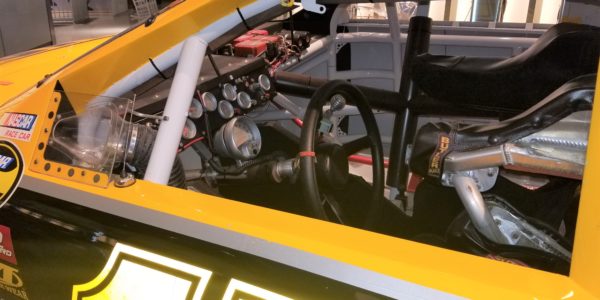 Another exhibit showed all of the various tracks on the circuit. Little did I know they are NOT all Ovals that drivers hurtle around in a perpetual left turn to the delight of fans. I was GLAD to see that there are many shapes and sizes (tracks AND fans) – some even with RIGHT TURNS. I had NO IDEA!

There was also a really interesting display devoted to cheating throughout NASCAR history – all of the little mechanical modifications that crews have been caught trying to slip through and onto the track to give their team an edge. Amazing that a hole drilled slightly off center on a suspension mount, or a carburator intake millimeters too large is deemed cheating/fineable/disqualification-eligible.

Amazing, too, the decidedly American tradition of pushing the envelope – legal and technical — to WIN at all costs!

Then, there were several networked simulators, the most sophisticated of which had a car-like cockpit, impact simulation and several-axis motion. The latter two I came to thoroughly appreciate when I competed in a “race” and hurtled into the wall at 200mph several times, once on my own direction and once when I was struck from behind by one of the other neopytes in a simulator nearby. I am sure this is FAR from “real,” but it FELT real, and the adrenaline was NOT simulated!

For the record, no fisticuffs were exchanged with the bozo that ended my race as they might have in a “real” race.

Finally, not far from Charlotte (in the opposite direction from Uptown for us) was the Charlotte Motor Speedway – one of the premier NASCAR tracks. We decided to head out there with our new-found knowledge and appreciation to see that end of the phenomenon.

There, we had a tour, which included a bus ride (at breakneck speeds – for a bus!) around the steeply banked track.

Had me wondering… do they have School Bus Races???

We also learned that there are actually CONDOS at the track – like skyboxes except one can live mere yards from the roaring of one’s heros (and their cars). So popular that another tower is being built. And, we learned, 95% of all NASCAR drivers actually live in Charlotte – so the center of the universe for fans of the sport!

All I can say is that I think Liz and I are now ready to do “REAL” NASCAR!  Which, according to conversation at the Burti’s involves camping in mud, drinking WAY too much, staggering home at 5AM, and even occasionally, watching a race! So, I was starting to understand, NASCAR is the southern equivalent to Ice Fishing in the North!!

Actually, we spent a lot of time talking about how much fun the RACES are. Mark and friends apparently still do this (these), and at some point, we may join them!!! Cannot wait – there are HUNDREDS of RV spots just across the road from the Charlotte Speedway, I am now knowing!!!

Setting NASCAR aside for a moment (or possibly for the rest of our lives), Charlotte also offered a few other amenities that we leveraged to the max while we were there. We visited the Levine Museum of the New South, where there was a very thorough and interesting exhibit tracing Charlotte’s path from the Civil War to today. One thing we had been told to visit, but which was basically closed (except for Ice Skating) until March: the US National (Olympic) Whitewater Training Facility. Next time!!!

Yet we saw few people!

But, there DID seem to be LOTS of restaurants and bars with outside patios. And A BUNCH of Breweries and Taprooms (Favorite: Wooden Robot). And quite a bit of BBQ (Favorite: Midwood BBQ). Both quite excellent and something(s) we managed to clear our busy schedules for each day

I guess it was the Middle of “winter” (at least what passes for winter here) with weather that sucked; I am thinking the young vibe was forced into hiding somewhat.

Did I mention that The weather SUCKED for 4 straight days? We simply didn’t get a chance to walk quite as much as we might have liked, or bike at all.  There seemed to be plenty of trails for the latter.

Leaving Charlotte, we redoubled our effort to drop in on Aunt Marilee in Washington DC. Along the way, there are Bluebirdbrain Friends Linda and Randy Burdette, in Fredericksburg, VA. They offered a spot where we could leave RV WHERE YET while we drive up to DC (about 90 mins away). Not to mention they are a lot of fun, eating, drinking and being merry-wise for a few days before/after DC. And then there are friends Laurie and Paul Wilner in nearby Bethesda.

SO we tee’d up a visit with ALL of them and especially with Marilee and headed out!!  Despite the fact that the weather was looking decidedly “iffy” (i.e. COLD and Snow, though the latter is predicted to just brush Northern Virginia and DC and the former can be addressed with our full tank of propane for the furnaces).

Before making our “go-No-Go” decision, I got a weather briefing from Pilot Linda Burdette, who said that the roads will be fine —  the problem with snow on the road is the “other guy.”  Was she talking about me?

← James Brown and the Lizard Thicket. ← Frozen (And NOT the Disney version!)
Next Up

Frozen (And NOT the Disney version!)

James Brown and the Lizard Thicket.

We are, as disclosed previously, starting 2020 with the grand circuit of the Carolinas. We’ve never been in the area…