We spent our first week in Amish Country,  which reminds us exactly why we are choosing to travel around the USA in the manner we are.  You would NEVER choose to visit ANY of the places we have been lately if you were looking at a tourist map or planning a 2-week vacation from work.  That kind of travel makes a minimalist,  abstract line-drawing of the target.  Our travels now are like an impressionist painting…more and more dots of color and eventually the full picture is apparent in all its glory!

So,  how to describe our time in Amish Country.

Well,  to begin with, of course,  we stopped in Shipshewana and addressed some bus issues.   The center of the RV industry coincides with this center of Amish heritage.  We visited the RV Surplus places and explored options for repairing the furnace,  which was returned to us in non-working order.  The fella who had it for a month said “too old,  no parts.”  I decided to take one more crack at it myself…after discussing the symptoms with another fella at one of the surplus places. He felt it was the controller board,  and  I was able to locate a replacement—this particular part is still used in furnaces sold today!  I installed this part,  and IT APPEARS TO WORK!!!   Cannot really be sure until it gets cold…I REFUSE to run the A/C so that it is cold enuf in the bus to test the furnace!

After repairs, we managed to squeeze in a BBQ with friends Wes Westerfield and Betsy Meisenheimer, whose place in Buchanan Michigan is not too far from Shipshewana. They drove over to the campground and gave us a chance to try out the special Blackhawks grill tool given to us by Liz’s sister Janet.  This was a prototype,  we hope,  for MANY FRIEND-VISITS along the way…feel free, all of you, to pull up  a chair wherever we are! I also made some repairs to the extendable step (opens by air-pressure when the door is opened, and was refusing to retract). Found a broken wire, and fixed it. Also replace the waste valves,  which had dried-out rubber seals and leaked. And I replaced some exterior hose hookups.   Altogether,  I fixed 4-5 issues and we broke nothing (that we know of, yet).  That level of reverse entropy is  the very definition of a good week in the bus!

So,  now about Amish Country…

What a spectacular and culturally unique place to visit.  For a couple of weeks, max. A little too wholesome for long exposure (you’ll will soon see what that means).  Our week in Berlin, OH was as part of a small rally of folks with Bluebirds.  We met some really nice folks whom I am sure we will run into again as we and they travel.

Compared to Ohio Amish Country,  The SOUND of MUSIC is a bawdy cabaret show!

We had some organized events such as a dinner-theatre evening and a couple of Amish meals.  The theatre featured a play about an Amish kid looking for his way.  He was a baseball phenom (think the Natural) with a 100mph fastball and a magnificent swing (developed hitting horse apples with a fence-rail). Well,  a fancy NY Agent signed him up for the fictional Las Vegas Vipers team,  who ultimately played the Yankees in the World Series.  Along the way,  the protagonist found the evils of drink, gambling and fast women.  After hitting bottom (spent the night of game 7 in jail!), he was encouraged to go back home by a Cuban rookie, where everything he ever needed was before him,  including Hannah…the girl who waited for him.   The plot was SO SWEET you could get diabetes,  but fun!

We also attended “Berlin Moo Days,” A celebration of all things dairy.  Including home-made Ice Cream created in a thumping,  one-cylinder piece of farm equipment.

While in Berlin,  we had a wood sign created for our campsites.  An Amish guy had a wood-carvery and claimed he could make anything into a sign.  We asked if he could do a one showing a depiction of the bus, with our names… My imagination had a picture of a guy carving by candlelight for 24 hours straight to get us a sign before we left Berlin.  His response was unexpected…

He said of course!   If you can give me a file (.EPS or .JPG) of the bus…he would put it into his laser-cutter.  Now my wood-carving vision was replaced with one of steam or diesel powered Amish lasers…  So I did a file…but he was out of wood blanks.  He offered us one that he had done for someone else that had an error…would do our sign on the back.  For almost $0.  Needless to say, we took him up on the offer and after I helped him (a little) to import the file into his software (he said his son is much better with computers and was not there), we have a great sign – for the “Harrises” on the front and for the “Millers” on the back!  The latter could be useful if we need to travel incognito ?

Also in Berlin, Liz visited a fabric and quilting outlet store.   She bought some basic equipment, a book and some fabric remnants…she plans to start quilting!  I have no doubt she will be creating masterpieces before long…and if she needs help or consulting,  we know to just swing back through Berlin, Ohio.

While in the Berlin area,  we found some attractions that you would not pick out of a guide book that were nothing short of SPECTACULAR.  How about the William McKinley Library and Museum?  This is in Canton, Ohio, and frankly sounded a little more interesting (and quirky) than the Pro Football Hall of Fame.  And it was both!  More of a museum of artifacts than a library,  but fascinating stuff.  Including an animatronic McKinley and Wife who narrated their story.

Topping that was our visit to the Warther museum in Dover, OH.  Ernest (Mooney) Warther was a WORLD FAMOUS carver of wood and ivory.  His particular focus was WORKING steam train scale models – his life’s goal was to present the history of steam-powered trains in his carvings.  Absolutely astonishing in the detail and craftsmanship.  I have some pics and some movies of the models…they do not do them justice. 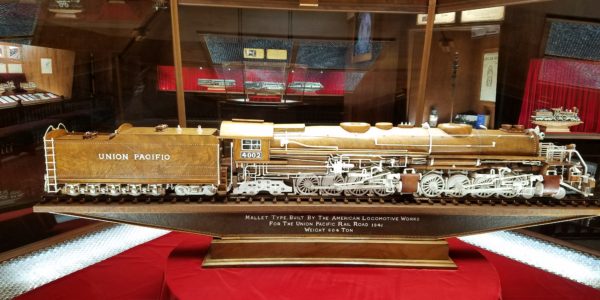 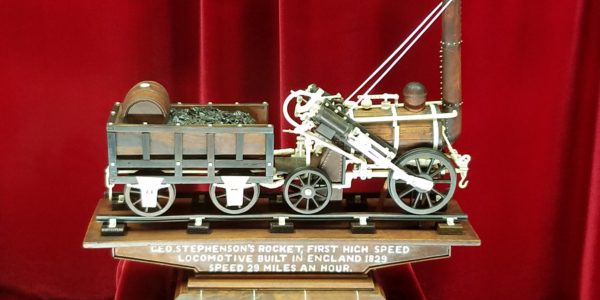 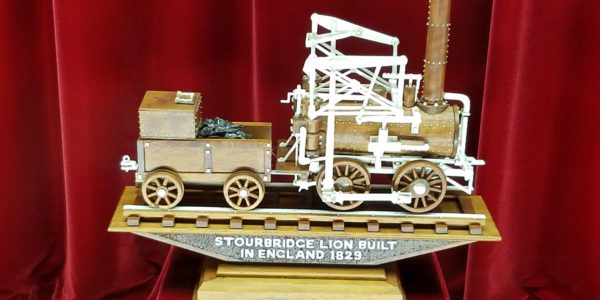 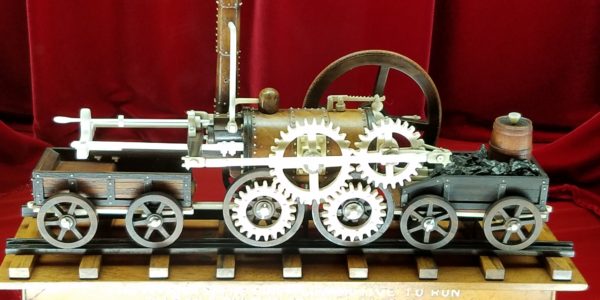 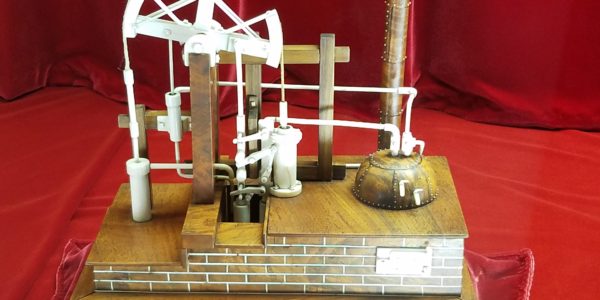 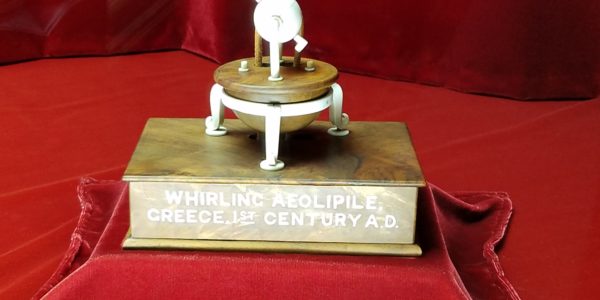 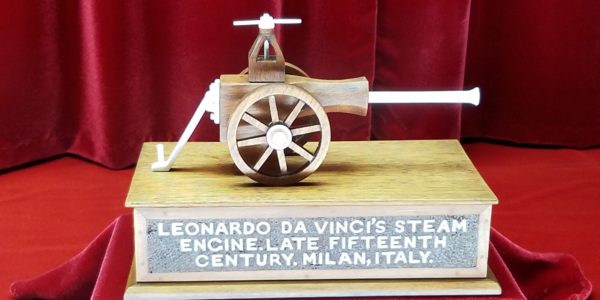 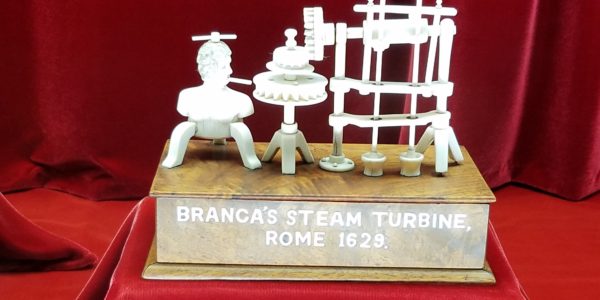 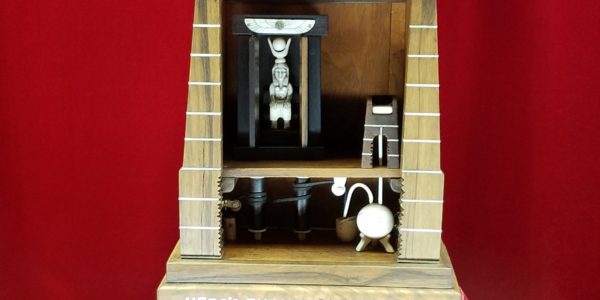 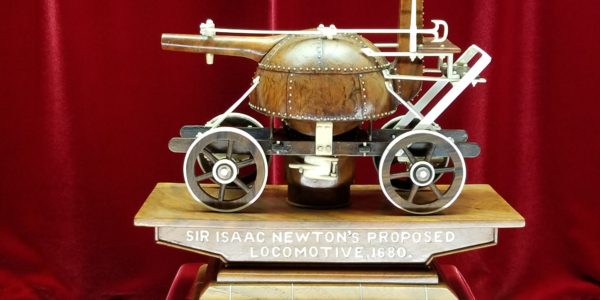 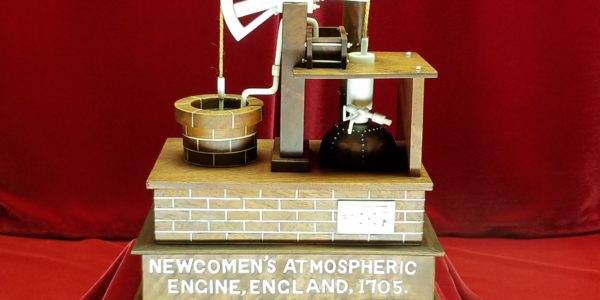 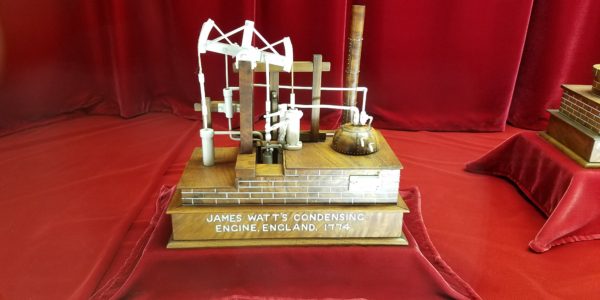 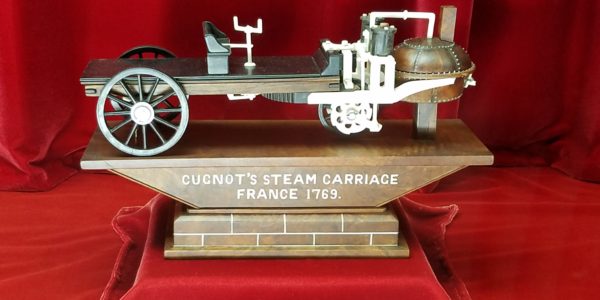 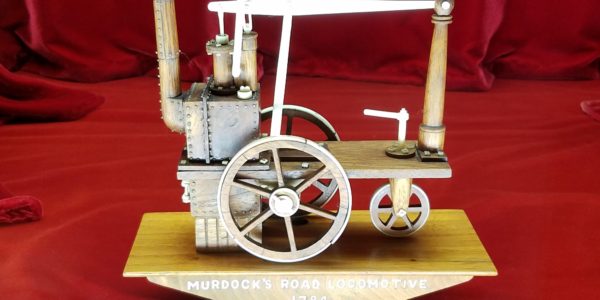 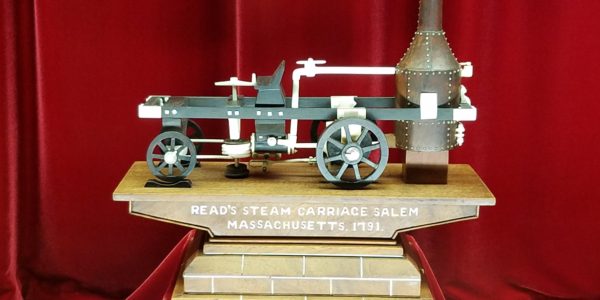 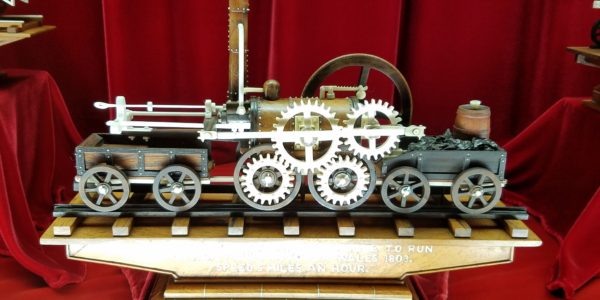 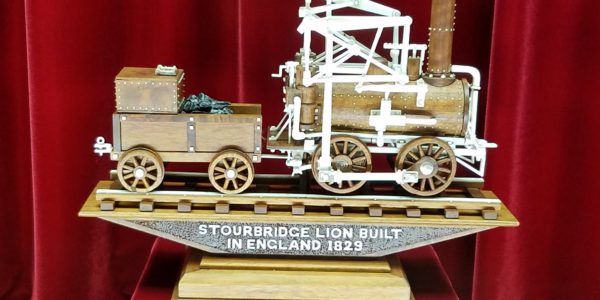 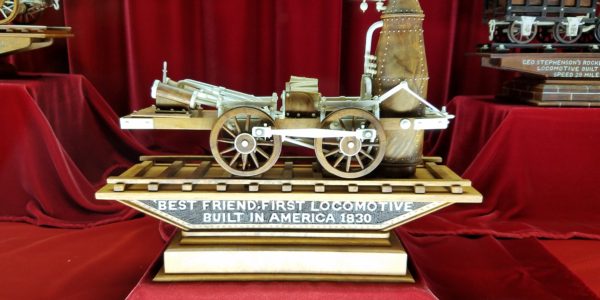 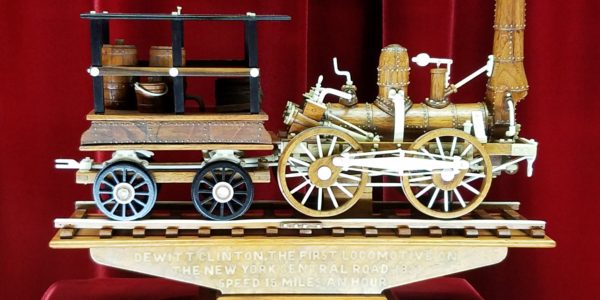 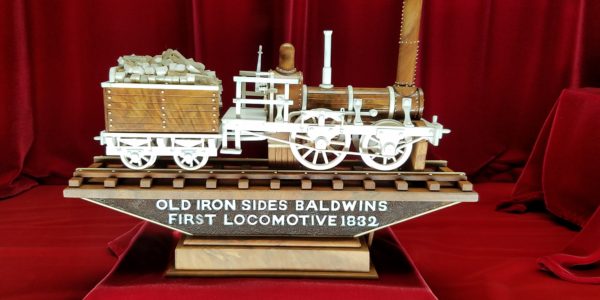 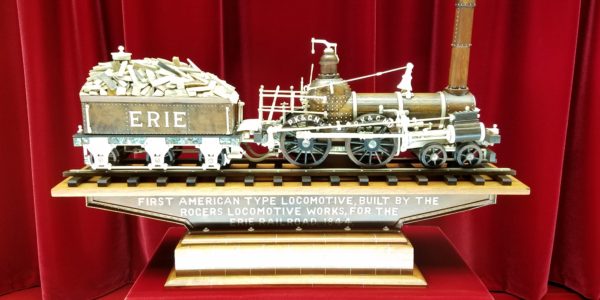 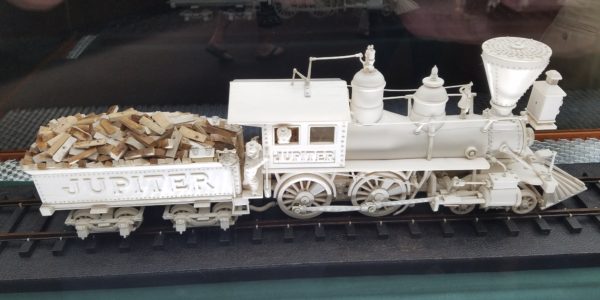 Mooney did not make a DIME from selling carvings…he gave them away or put them away.  Many are in the museum,  some were given to Presidents!    Mooney made his actual living making and selling Knives…which he was forced to manufacture to make unavailable, specialized tools for his carving hobby… and kitchen knives for neighbors.  We bought a spectacular and very unique Cheese Knife.

Mooney’s grandson David also carves…in his case the history of sailing ships from the ancient Phoenicians and Egyptians to the Clipper Ships of the 1800s.  The detail in these models were as astonishing as his Grandfather’s Trains. 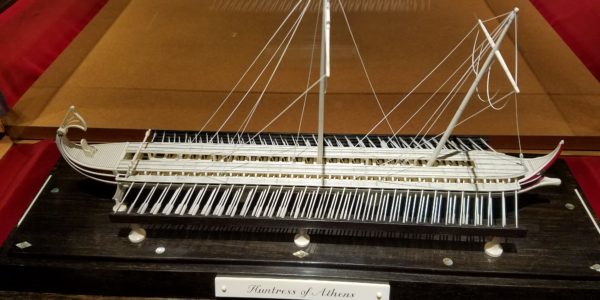 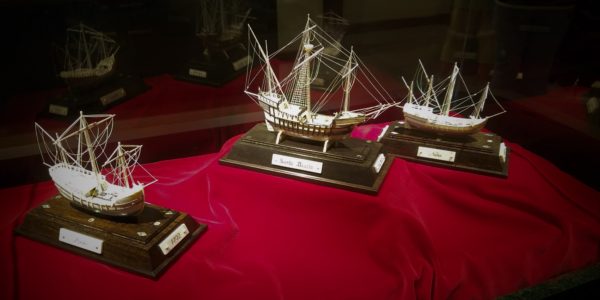 Almost all were carved from antique Ivory; a few from wood  and a few other materials such as abalone and bone.    Antique ivory is certified (with appropriate paperwork) to have been acquired from before the world ban on ivory. So it is found mainly at estate sales, but also garage sales, flea markets, etc.  David ONLY buys and carves ivory with known origin, and sometimes the story of origin is as interesting as the piece produced.

David himself was working at his shop/museum. He showed us how he creates ropes for the rigging on his models from ivory.  Who knew that Ivory in a thin strand (the diameter of a cat’s whisker) becomes flexible like rope?   David said that ivory is a unique material…with properties of both wood and metal.  And apparently rope as well.

David,  too,  does not sell his models.  He ONLY creates them for display in his museum. 85 sailing ships made (each taking 6-8 months). 85 on display.   He makes his living creating raw materials and parts for musical instruments from ivory, bone, abalone etc.  His sculpting with these materials has made him one of the world’s experts on the properties of these esoteric materials,  and probably the only source for specialized pins, gears, frets, inlays, etc. for high-end instruments.

← Summer Dreams… ← The Air Force Museum and Waffle House
Next Up

We left Amish Berlin in a sort of Bluebird Wanderlodge Caravan…several of us were heading onwards to Dayton, OH.  There…