Subtitle:  How we fill our days when we wake up with absolutely NOTHING on the schedule…

Since we had arrived at our spot near l’Anse aux Meadows mid-afternoon, we thought we’d drive around a bit…see Whadda y’at. That is Newfoundland for “What’s up” or “What are you up to.” We planned from the start to get to some of the Viking archaeological stuff, including the l’Anse aux Meadows National Historic Site, which was the site of a Viking Settlement in about 1200. But we are here for 4 days…that ain’t enuf, even IF we have to do laundry one day! So, we drove out of the RV Park and turned randomly right then left. Ultimately, past a little town called “Saint Lunaire-Griquet.”

There, a couple of entertaining options fairly lept in front of us, like moose are reputed to do, though we have yet to see one. First, we drove past a street called “Dark Tickle,” which no one can or should pass up based solely on that name. We turned, and a sign promised Zodiac Nature cruises. Sounded fun (as something on a street named “Dark Tickle” SHOULD be) , so we went down to find out. 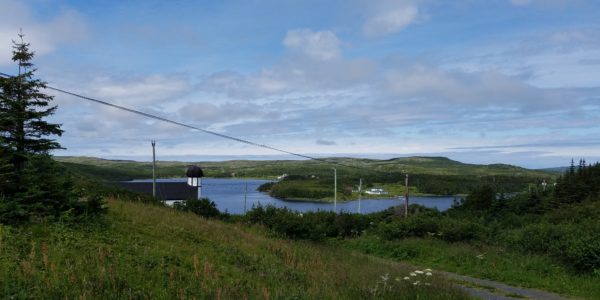 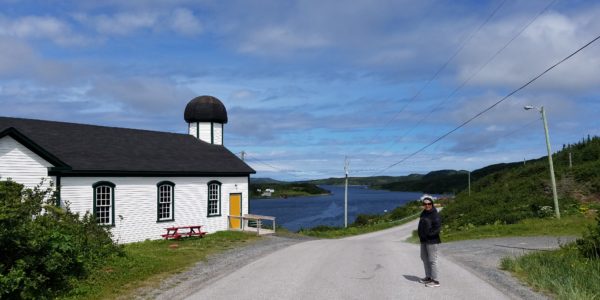 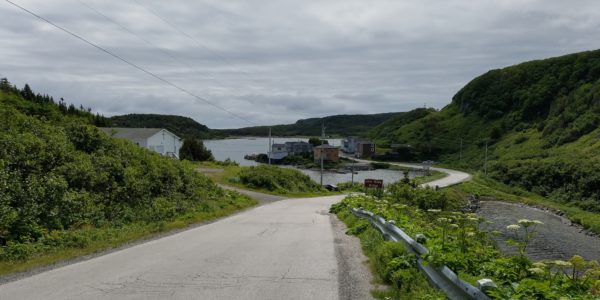 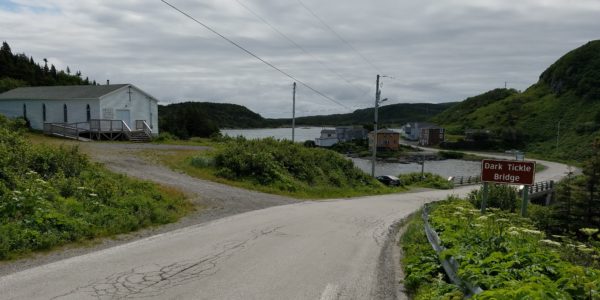 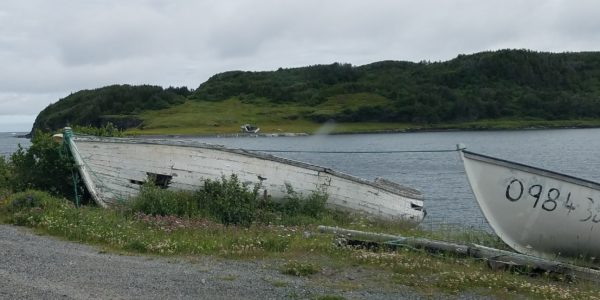 We found the dock and the boat and Glen, the naturalist. Glen’s cousin drives the boat. He said the boat goes 3x a day and there were a lot of mackerel around which whales had been following. He said that day they had seen from REAL CLOSE a BUNCH of Humpback Whales and a couple of Fin Whales. The latter are not seen often – the second largest of all the whales.  Now, I was trying to imagine seeing an 80’ Fin Whale, never mind a 60’ Humpback up close and personal from a 20’ Zodiac. Glen said he couldn’t promise, but the chances were good. We booked for the next day.

Liz asked what to wear (it was “Maussie” at the moment – MISTY). Glen showed us the BRIGHT ORANGE combination Insulated-flotation suits all guests wear. Not “just” life jackets…you are dressed in full survival gear. Glen said we are smack in the middle of Iceberg Alley and the Labrador current. If you went in the water, you’d have serious hypothermia before they could get you back, if you only wore a traditional life jacket. So no messing around.

To Liz’s question, it hardly matters what YOU wear…you will be outfitted with an orange jumpsuit not quite like a michelin-man costume, but not unlike it either.  And Glen was very right about the Whales we “might” see… 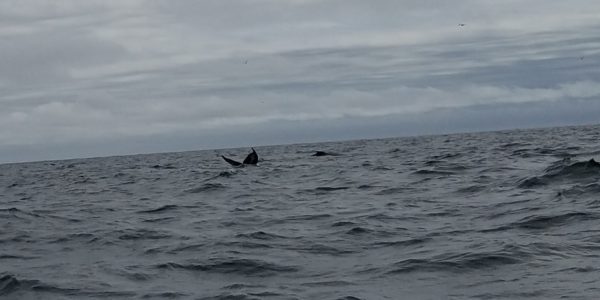 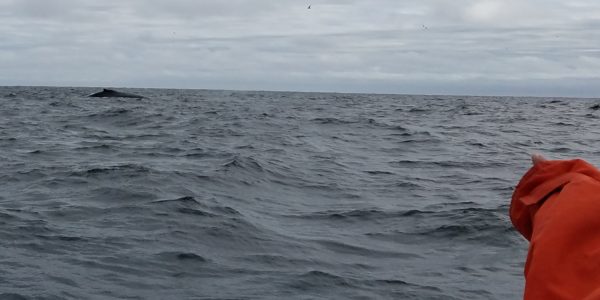 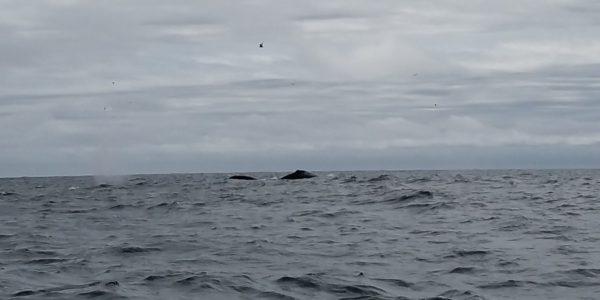 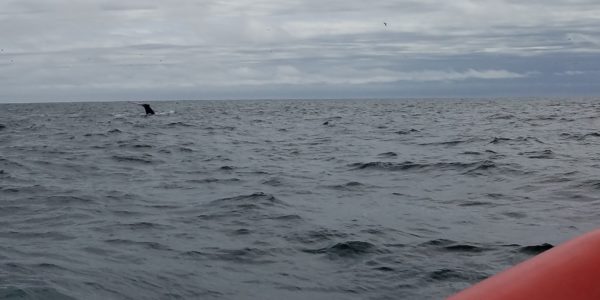 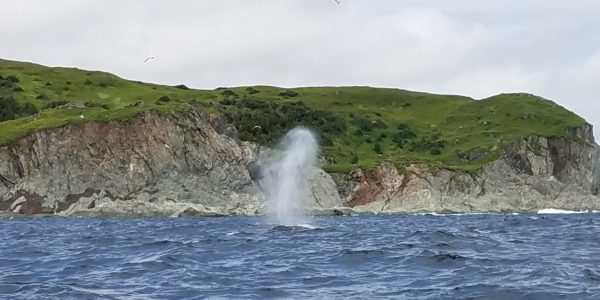 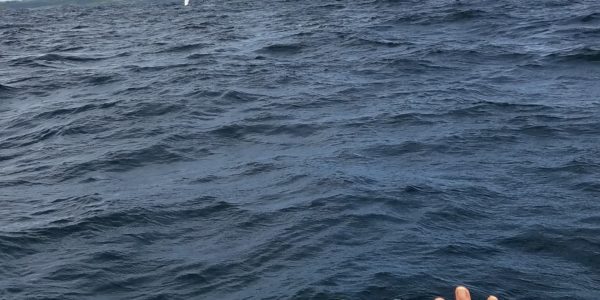 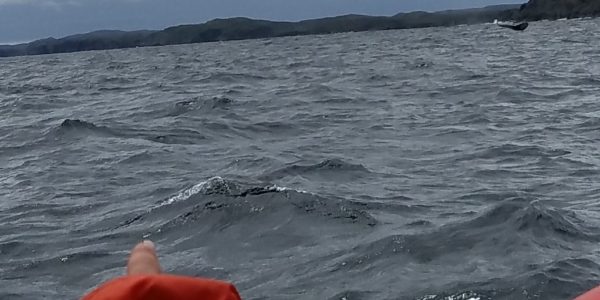 On the way back to the RV park, we passed what looked to be some sort of Festival in the setup phase, so we stopped to see Whadda y’at. We met Marilyn and Dale, who are the festival organizers. They told us all about the “Griquet Mussel Fest” which started that very nite and continued through the weekend. TIMING IS EVERYTHING (in a good way, this time).

Marilyn said the festival included a shed party immediately following the Mussel Boil Up. Now, we needed translation for much of this (even though we already knew Whadda y’at). A “Mussel Fest” seems straightforward — $10 (Canadian) for all you can eat Mussels. A Mussel “Boil Up” refers to the big pot and means by which they are cooked (sounds a lot like a fish boil…). Beer, too, though she said we’d have to buy that.

We were were most fascinated by the concept of a “Shed Party.” A Shed Party is in a Shed (obviously) – in this case in the Municipal Fire Hall — and involves live music, singing, dancing and general carrying on. It STARTS at 10PM (which is normally after our bedtime). It gets its name from the thousands of  “Shed parties,” which is a Newfoundlander drinking beer in their shed (usually alone). The festival includes apparently a COLLECTIVE shed party, so everyone can drink beer together in a great BIG shed.

Now, Griquet is a SMALL town, so such a party would attract everyone for miles around. Dale said they were looking for Players and singers…do we sing or play? NO, definitely not. She said not to worry, there will be singing and playing SOMEHOW. She said, “We MUST come anyway.” And beer will be available, Dale thought.

Oh, and by the way, Dale, our new best friend and Shed Party Host, IS THE MAYOR of the town. We PROMISED we would be there…not wanting to offend the Mayor or anyone else for that matter – our countries being not on the best of terms at present.

So, we did go to the Mussel Festival AND to the Shed Party. And they were collectively a MASSIVE cultural phenomenon. And every local we met was intent on making sure we had fun, and a thorough explanation of any local culture, delicacies or festivities ensued.

Let’s start with the festival. Mussel-eating is pretty much cross-cultural – all you can eat, and delicious, no surprises there. But it was accompanied with “Lassie Bread.” This turns out to be a couple of slices of white bread, to which butter is applied. Then, a generous pour of molasses from a carton like a milk carton. Plop the pieces together and then toast the bread on a grate over a fire.

WOW. Is that GOOD!! The bread get’s toasty (a little bit of a challenge like making s’mores—getting the toastieness just right without major conflagration) and the butter and molasses mix together and get warm and juicy. Like Newfoundland, simple, direct and delicious!

Once the beer booth opened, another cultural phenomenon presented itself. There were some long structures – don’t know how to describe them…like cattle chutes, or maybe 3-D fences seperating the “19-and-over” area (more like a holding pen) from the rest of the park. Liz asked what those were about – imagining some sort of kids game played in these chutes … or perhaps locking the kids in there to keep them contained. NO, there is a more interesting explanation…These are to keep patrons WITH BEER from handing said beer across a simple fence to someone outside the beer area.

The “Chutes” were actually fences designed specifically to be wide enough to prevent passing contraband. WEIRD on so many levels.

It turns out that alcohol is still sort of a cardinal sin for the secular and religious alike. We didn’t meet any folks who actually were opposed on a religious level, but the boundaries are strictly enforced. And we noticed that ALL Churches had a social hall across the street from the church so alcohol could be served NOT in the Church. Even the SHED where the shed party was to be located later in the evening, ran into LOUD opposition when built…a MUNICIPAL BUILDING serving alcohol… THE HORROR (to some).

The next cultural phenomenon was triggered when a certain local named Robin, in cahoots with her husband Byron (a musician in the band), Dale the mayor and our long-time (i.e. 24 hours) friend Marilyn found out we were “Come from Away.” (Not from NewfoundLAND). Robin asked…have you been “Screeched In” yet? I said, NO…we sort of WANTED to…

We had been assured (and Robin confirmed) that even tho there is a LITTLE BIT of embarrassing tourists going on, it is done in a charming, NewfoundLAND, self-deprecating way.  Newfies PROUDLY make fun of themselves, and are PROUD to Screech-in folks – make them “Official Newfies!”   To share being the target of collective joke(s) about being Newfies is a HIGH HONOUR. Best way I can explain it, and the more time we spent with locals, the more we wanted “in!”

Anyway, Robin said, “We’ll take care of it…don’t you leave now..” and she was off. At the time we thought to help with some festival logistics, but NO, she had to gather all the ingredients required for a proper “Screeching-in.” It seems to be fully “Screeched in” you need to… Dress like a Newfie , Eat like a Newfie, Speak like a Newfie, Dance like a Newfie, Drink like a Newfie, and, finally, KISS A COD. SO some materials were needed to conduct the ceremony.

A little later, Robin had gathered some rain slickers, rubber boots, lassie bread, bologna, rum and a BIG COD FILET. She then had the musicians invite us up on stage – a couple of other folks were cajoled into participating as well. The lead guitarist, Calvin, had obviously done this (screeched in visitors) once or twice before. He smoothly lead us through the rituals.

We each put ONE BOOT on (there either were not enough to go around OR Newfies cannot always locate both boots), and a rain slicker (Mine was a ladies size 4).

He then preceded to teach us important Newfie phrases, which we had to repeat to delight of the gathered Mussel Festival Crowd.  Then he had Marilyn come up to teach us a Newfie Dance. That sounds a bit formal…she said do anything you want…no one has ever been kicked out of Newfoundland for looking ridiculous on the dance floor. Her demonstration was a cross between an Irish Jig and stomping out a fire. Liz and I know a FEW moves, but our capabilities were severely tested by the fact that I was wearing ONE rubber boot, which was too small and on the wrong foot.

Finally, we ate the Bologna and Lassie Bread, drank the rum, and KISSED THE COD. Calvin said you have to compliment it first – cod like women must be complimented before being kissed. #MeToo.

In the end, we were all graciously, and somewhat raucously accepted into Newfie-dom. There were apologies that no official certificates were available. Calvin said he didn’t know the ceremony was taking place or he would have brought some. He said he also would have brought Salted Capelin (A little dried fish like a sardine) and a WHOLE COD, not a filet for us to kiss. I said not to worry, there was ample photographic evidence!

The Shed Party that followed the Mussel Festival began at 10:00. We left at about 12-dark-thirty and it was still going strong. The musicians rotated…they were folks from the area who could play and/or sing. There was some dancing, quite a bit of beer…just generally a good time.

As we were leaving, a woman who was sitting at our table followed us out. She said, “This might sound a bit forward, but could you drive me home?”

The reason, it turns out: She was afraid she might run into a MOOSE on the way home (she lived 500 yards down and across the road). Earlier in the evening, Dale showed us a picture of a Moose taken that very afternoon on the very field the Mussel Fest was taking place on, so the concern is there. (We had STILL not seen a moose, BTW).

I apologized and pointed to the Smart Car – said 3 people IN a Smart Car really means 2 IN and one ON a Smart Car…she would be safer with the moose! I did offer to drive her, then come back for Liz…she would not allow this. Instead, we sort of drove slowly as she walked home along the road.

Yes, b’y. Which in NF means something like ”Really, it’s true!” And which I take to mean , “You cannot make this stuff up!

3 thoughts on “Whales, and a Whale of a good time!”

← Shhhh. Don’t tell anyone. WE SCORED SOME MOOSE! ← Vikings: the “Original” (European) Newfies…
Next Up

And we are proud to now call ourselves one! (Newfie, that is...certainly NOT Vikings) Our last couple of days at…

Shhhh. Don’t tell anyone. WE SCORED SOME MOOSE!

We moved on westward from Gander, making it to a place called “Deer Lake,” where there was a very nice…