And we are proud to now call ourselves one!
(Newfie, that is…certainly NOT Vikings)

Our last couple of days at Griquet were spent touring the local area and visiting with friends. New friends. NEWFIE FRIENDS. Fellow Newfies! And, FINALLY, we did see Moose.

We spent some time at the Viking exhibit at the l’Anse aux Meadows Historical Site; our actual “reason” for traveling this far north. There we had a ranger-led walk through the archaeological site, which was interesting from a couple points of view.

First, and mostly, it was interesting to hear how the Vikings landed here, and why. This was partly deduced from the Viking Legends and Writings. Leif Eriksson and Erik the Red both spent a year or two here and wrote about the area.

Supporting the legend and the place LAM fits into it is a LOT of evidence…from remnants of iron nails to wooden pieces with sharply fashioned surfaces that indicate iron tools were used to make them. Even sewing needles and components of looms that Viking Women would have had in their “kit.”

We learned that this was a very TEMPORARY settlement…used as a stopping and overwintering place; a place to repair boats before sailing onwards between Greenland and “Vinland.” Vinland is generally thought to be farther south and a bit more westernly ( I.e. New Brunswick and Nova Scotia) parts of Canada and possibly the US (i.e. Maine, Massachussetts, etc.) , where forests abounded, grapes were found, etc.

l’Anxse aux Meadows was used for about 10 years in 4 distinct shifts. Then the Vikings burned it down as they left for the last time.

Theories abound as to why the area was abandoned…since it was a base only, not an actual settlement, most of them had to do with the value of products from Vinland relative to the amount of hostility the Vikings faced from the Aboriginal population. Contact between Vikings and First Nations People did not end well, usually. Many battles were fought, and lots of Vikings died, including Erik the Red.

These aggressions were further on, in Vinland…there was no evidence of fighting at l’Anse aux Meadows. The Vikings seemed to have simply decided it wasn’t worth going to Vinland, so there was no longer a need for the base camp, many scholars think. 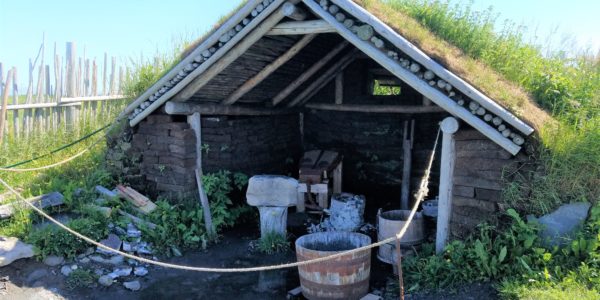 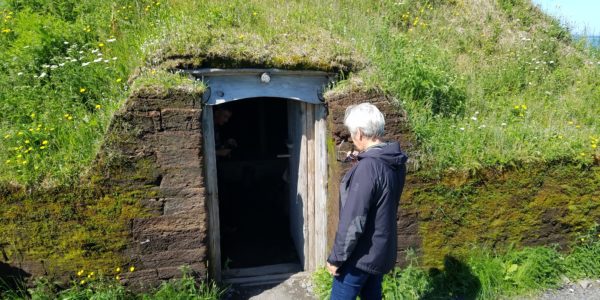 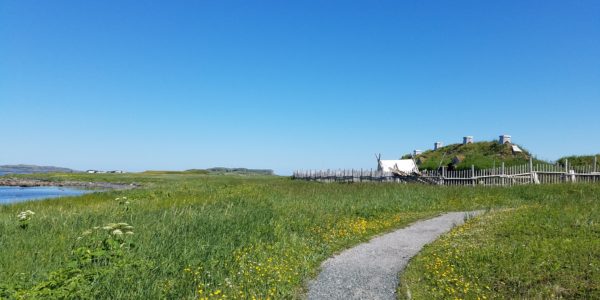 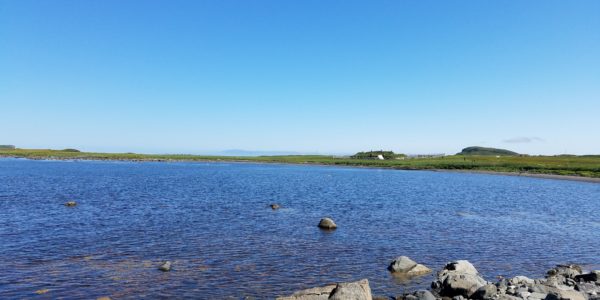 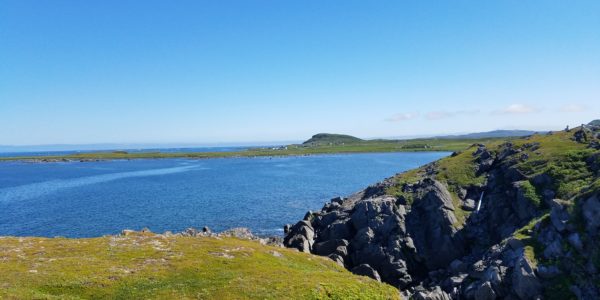 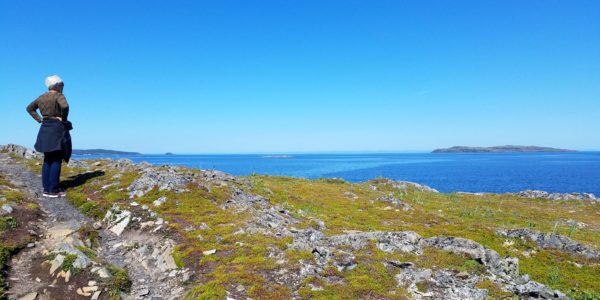 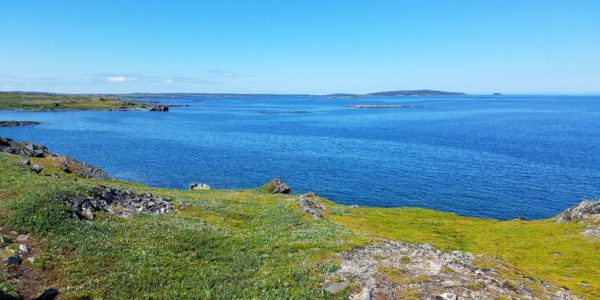 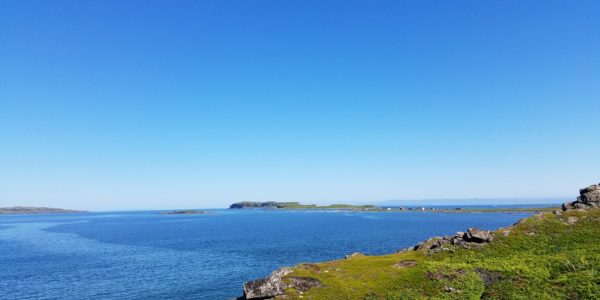 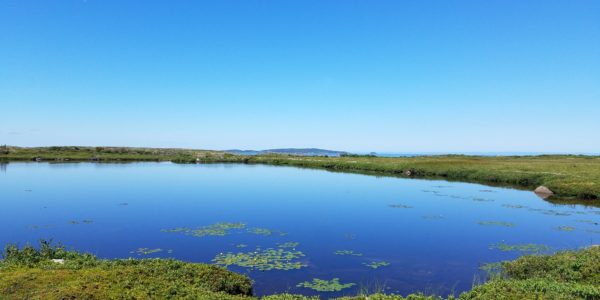 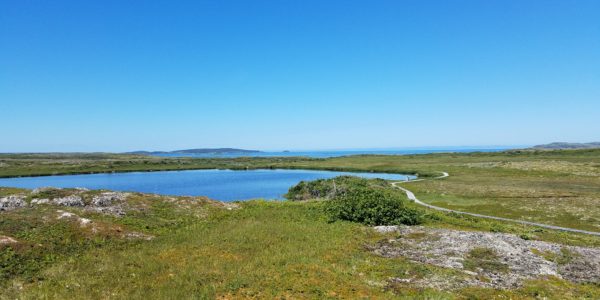 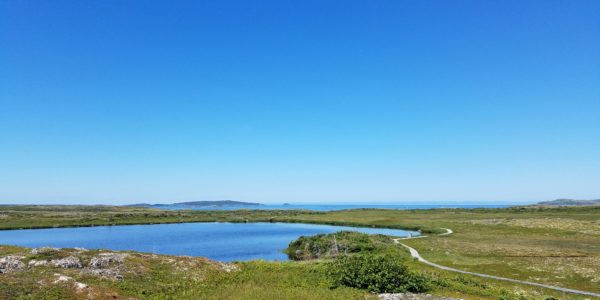 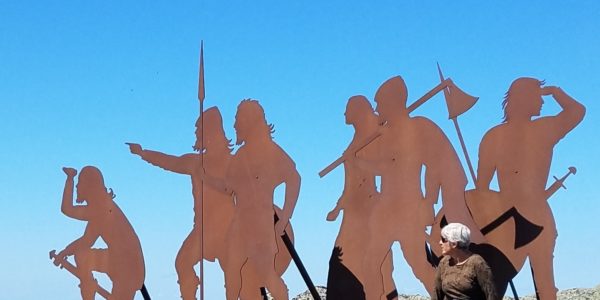 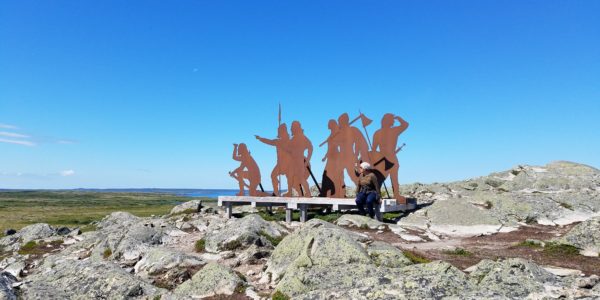 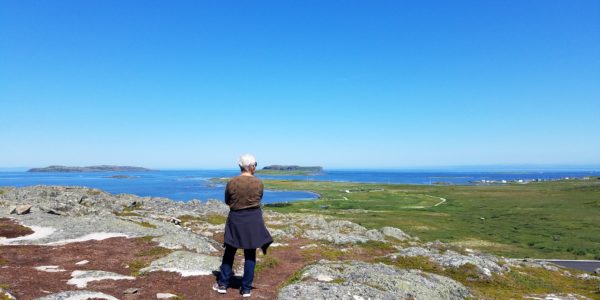 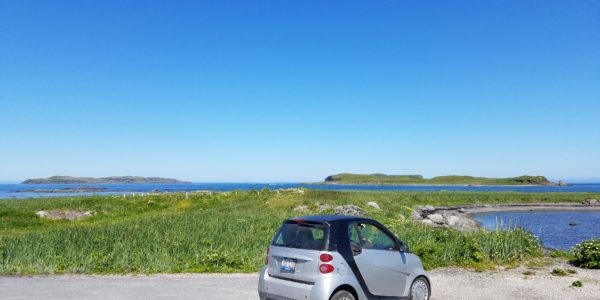 We also learned that the ranger grew up in the little village visible in the distance. He was a fisherman with an interest in Archaeology when foreigners came to excavate and understand the “Indian Mounds” he had played on and around as kids. He got a job with the archaeologists and actually helped make some of the discoveries.

SO we got sort of a first-hand retrospective on the archaeology – mixed with a wistful description of life in the area before the cod fishing moratorium in 1992.

The more we talk to Newfoundlanders, the more we understand the double-edged sword that joining the Confederation was for the province. The “outport” way of life vanished early on as small communities were not quite forcefully relocated to larger ones that the Canadian Government could support with appropriate infrastructure. And the fishing way of life basically ended with the Canadian Moratorium in 1992, displacing MOST of the young folks to other places where there was employment opportunity.

Our ranger was a good example…his fishing life ended when he was a young man. He KNOWS he was fortunate to find other, gainful employment near his traditional home, but he still considers himself a fisherman. Many people who remain here actually work away – weirdly a high concentration as far away as ALBERTA (in the Oil fields). They’ll work 6 months, then come back for a bit before returning.  They consider themselves Newfoundland residents AND fishermen, even though they earn their livelihood in Alberta oilfields.

We also spent some time exploring the local area…there is one town of some size, St. Anthony. By that I mean a port for larger vessels AND a Supermarket, Hospital and TIM HORTONS. You cannot be a full-on Canadian City without a Tim Hortons, I think. On the way back from St. Anthony we hoped to see a moose…several folks at the Shed Party had described places when they might be found.

Still to no avail.

Finally, we went back to Griquet for the closing festivities of the Mussel Fest. This was another party, with local music and beer (available only INSIDE the pen, of course, but no one was outside the pen) and all-you-could-eat of the remaining mussels. This evening, the sky was CRYSTAL clear, and there were more stars than we have seen in awhile (there is not much light pollution in Northern Newfoundland!). At the party, our friends (truly!) made us feel welcome again. The lady in the beer tent had our order ready for us when she saw us coming.

On the way to the party, I suggested we drive AGAIN to some of the ostensibly prime moose-viewing areas. To establish once and for all if there are really moose, or only gullible tourists. Lo and behold, we passed a small pond with THREE MOOSE nonchalantly drinking at the margin. Later, Marilyn told us there were SEVEN MOOSE in her front yard that morning! We are starting to believe.

Perhaps the moose reveal themselves ONLY to “official” (or honourary) Newfies, which we now are!!!  I do have some other theories (which will be revealed in a future post).

At one point, Marilyn asked, “Have you ever had Seal Meat?” That is a negative, I responded. Not only haven’t we had it, we cannot even IMAGINE it. She said, “Well Stay where ya at ‘till I comes where ya at…we bottle it during the season.” (That means “Stay there until I get there”). She was going to drop everything and drive home to get a bottle to give to us (she puts up seal every year during the season).

Not really possible to say “NO” to such hospitality.

I said, “Though we would LOVE to try this, PLEASE do not to go out of your way” …she was after all sort of crazy-busy running the festival. I tried to find a way to respectfully decline…Marilyn works full time at a hotel in St. Anthony, THEN she was running the Mussel Festival and assorted Shed parties until 2-dark 30 AM each day. She didn’t need tourists visiting her home (or so we thought).

She said, “NONSENSE, I want you to try some…we are quite proud of these things here. Will you two come over to our house tomorrow evening after supper?” [ emphasis important to the story…stay tuned ]

At breakfast at our RV park, we learned that the owner bakes pies for sale – and for the campers. Really. We asked if we could buy one (Partridgeberry, which we learned is what Newfies call Lingonberries of Norse/Swedish fame) that we could take to Marilyn as a hostess gift. Marilyn doesn’t drink (she said, “I am too wild already…I would be afraid what would happen if I drank.”), so we struggled with what to give her to thank her for making us welcome (and for the impending taste of Seal Meat). This seemed like the PERFECT solution. Of course, said Grace, $7. Canadian. For a fresh, home-baked pie.

We turned up at 6:15-ish (so AFTER supper), which was more difficult than it sounds. Marilyn’s directions to her house were completely understandable to a Newfie, but a little vague for CFA. “Across from the Restaurant, take the road, then the drive. Up aways a white house. You cannot miss it.”

Good thing we were screeched in by this point, so the directions made sense!

And as we have come to expect, there was the promised Seal meat, but also so much more. In this case, an ENTIRE SUPPER (the arrangement had very clearly been for “after supper” which must mean something different but not taught to us at the Screeching In Ceremony). Coffee was served with “Real Milk” (what Newfies call evaporated milk straight from the can). We also had Cloudberries with a little sugar…YUM!!! Marilyn said this would normally be served with Fussels Cream (a Danish product, also from a can – and also spread on Lassie Bread!), but she was out. Something to look for at the next store we stop at!!!

For the record, Liz said, “Seal Meat tastes ABSOLUTELY NOTHING AT ALL like Chicken.” Best I can describe it: Like a cross between a slightly-tough Beef Steak and a Fishy-fish. Not sure I would enjoy it regularly, but our motto has always been, “We’ll try ANYTHING once…”

And we learned a bit more about local culture. For example, Marilyn’s husband, Wayne, told us that you can easily tell the drunk drivers in Griquet…they are the ones driving absolutely straight down the middle of their lane on the road.   Huh???  That doesn’t sound right,  I thot!    Wayne continued, “Fully alert drivers are weaving all over to dodge pot holes (and the occasional moose).”   Hadn’t thot of it quite like that, but it makes sense.

Wayne also described how the cost of living – and especially food — here is near zero: Moose for the taking, Seal meat available and plentiful during the hunting season, as much fish as you can eat — the COMMERCIAL fishery is closed, but you can fish 3 days a week and catch 5 Cod per person on the boat up to 15 total. Marilyn’s cousin, Boyd offered to take us Cod Jigging when we met him at the Mussel-Fest.

We declined but thanked him for his offer – the generosity here is truly overwhelming!

There are also berries of many kinds (Partridge, Cloud, Blue, Black, Crow – most we had never heard of) to be picked by the gallon. September is the month for berry-picking (Fran and Mike McDowell take note!).

When we asked about the MASSIVE piles of firewood (for the wood stoves most use for heat) along the road everywhere, the Ranger at l’Anse aux Meadows said everyone can get a permit ($22) to cut 18 cords of wood a year. This is done during the summer. Then, when it snows, the wood is hauled by snowmobile to the roadside, cut, split and stacked to season. Eventually in the summer it is retrieved to the piles of heating fuel next to everyone’s house.

“Eventually” BOTH because summer can come late here (There can be snow and there DEFINITELY are Icebergs in late June) and because people are in no particular hurry to haul “their” piles home. Asked if there is a problem with people “borrowing” wood from the piles, the ranger said, ”No one would take someone else’s firewood — if they did and it was found out, they’d have to move far off the island forever. “

We left Griquet, bellies full of Seal Meat and souls full of happiness, with our hard-earned Newfie status and dozens of Newfie friends. Marilyn’s comment, when we were leaving was, “No Price Tag on our Doors, here” she said. Meaning welcome anytime, for any reason and no doubt referring to the pricelessness of friendship and hospitality. Next stop Gros Morne National Park for several days; our last stop on Newfoundland.  Stopped on the way for an overnight at a little place called “River of Ponds.”  VERY quiet.

← Whales, and a Whale of a good time! ← Gros Morne World Heritage…
Next Up

Our last full-fledged stop on Newfoundland was the Gros Morne National Park. [su_pullquote align="right"]Parks Canada does a GREAT JOB, and…

Whales, and a Whale of a good time!

[caption id="attachment_5298" align="alignright" width="300"] Mussels and More Mussels[/caption] Subtitle:  How we fill our days when we wake up with…