We moved on westward from Gander, making it to a place called “Deer Lake,” where there was a very nice RV park. The owner came by in his pickup truck and admired our Bus. When he found out we were from Chicago, he told us he went to “RV PARK SCHOOL” in Wheeling, West Virginia to learn how to build his park.

Apparently, Wheeling, WV is close to Chicago, and is a worldwide center for RV Park Technology.

Anyway, this evolved into a 30 minute conversation including several recommendations for things to do and see in the coming weeks. These included some things on our radar already (Viking stuff, Gros Morne Park) and some stuff we knew nothing about. For example, a boat cruise in a Newfoundland Fjord.

We spent a couple days in Deer Lake because we developed an issue with the RV WHERE YET’s Airbag suspension…and I pinned this down to either a leveling valve or a pilot valve.  Not important what those are, just that these are VERY ROUTINE truck parts and I carry spares of both based on recommendations from fellow Bluebird owners. We could limp along with the bad parts, but our next destination is REALLY at the end of the world – the Northernmost tip of Newfoundland, where Vikings landed a thousand years ago. I did not want to START that leg of the journey with questionable running gear.

Problem is, although the repair would be easy, even for me, it is not possible to get to where these parts are installed without a jack and cribbing to hold the bus up.  The problem was short lived and easily solved.

A short walk down the road (we like to walk) as we explored Deer Lake revealed a truck tire and service place. They were reluctant to work on an RV, but after I convinced them that although it LOOKS like an RV, it is really a truck they said “Bring it in! How does 2:30 work for you!”

PERFECT – we finished our walk, then delivered RV WHERE YET to the service place.

At 3:00-ish, they had me pull the bus into the bay with the pit underneath. It took them about an hour to install a leveling valve and it took us about another hour to adjust all the valves to properly level the bus.

Episodes like this make me REALLY GLAD that we own an old Bluebird. The operating “stuff” is so simple that I can troubleshoot it (with online help from fellow owners). Then, I can find a willing mechanic almost anywhere and even the middle of nowhere. Deer Lake, Newfoundland PROVES the latter point! Of course, if I hadn’t been carrying spare parts, we might have been “stuck” for a few days…but the town and RV Park are SOOPER; that would not have been a bad outcome, either!

While they were working on the leveler, I was cleaning battery terminals in hopes of improving our power situation. At 5:00 the bus was in tip-top shape (well, level, anyway). By 7:00 it was very clear that the batteries were performing better…not as good as new but WAY better.

So, it was a VERY GOOD DAY in Bus-land. Two things fixed. Nothing broken.

After completing repairs on the leveler, we were chatting with the office staff and owner of the Tire Company. They provided us a TON of things to do and places to see…took a real interest in making sure we had a good time. What a surprise, here in Newfoundland! Anyway, on a flyer, Liz asked: Can anyone tell us where to get some moose meat? A few furtive glances. Then the owner said, there is a place 15km North of here…I pass it on the way to my cabin every day. They have GREAT Moose Burgers. “I bet they could get you some…”

Just the kind of break we were waiting for!  We decided to go there for dinner…

We had a GREAT moose burger. I then asked the waitress the usual: “Know where we can get some moose meat?” She said, ”Let me get José” — that was NOT his name…I am changing it to protect the innocent. And the guilty.

‘Jimmy’ said it was his job to hunt the moose for this restaurant…he had a license. And the restaurant had a special license to buy and sell, but only to be prepared at the restaurant. ‘Claude’ said last year he got 416 Moose. 416!!! I think he was exaggerating a wee bit, but he thought he could maybe get us a roast or two. He could not get steak, but asked if AWESOME hickory-smoked moose sausages would do. He proudly told us how he cuts the moose, which can be a little dry, with his own hickory smoked BACON.

I said, ”Every so often, yes, but I never with moose…there is always a first time, tho…”

We worked out that we could drive by and make the exchange in the parking lot of the restaurant as we headed north the next day. I wasn’t sure if we were supposed to stop or just slow down and open the window so ‘Francois’ could toss it in as we drove by. I really did feel like we were scoring cocaine.

After collecting our contraband, we drove north as expeditiously as possible without arousing RCMP suspicion on a road called “The Viking Trail.” Our Destination was to be the Viking Settlement and archaeological sites at the very tip of Newfoundland, near St. Anthony and l’anse aux Meadows. This was not do-able in one day’s drive for us (remember, we go SLOW), so we turned off the “highway” (which the Viking Trail is, more or less) and went into a place called Port au Choix. Picked solely because we did not know how to pronounce it, and wanted to ask someone.

Port au Choix turns out to be a pretty historic place in its own right. It is a place where waves of immigrants settled, to make use of the abundant natural resources that included caribou, moose, seal, fish and special types of stone from which knives, harpoons, spearheads and many other tools could be manufactured. There were Archaic Maritime Aboriginals, 2 different waves of Paleoeskimos (as differentiated from Archaic Aboriginals by virtue of coming from the north and being considered arctic-adapted), Beothuk Indians and then Europeans. The visitor center at Port au Choix National Historic Site (a 5km round-trip walk from RV WHERE YET)  did a great job of explaining all this.

Our accomodations at Port au Choix were SPECTACULAR. The Lion’s Club has an RV Park and Campsite directly on the shore. We did not need hookups of any kind for one night, so Todd, the manager said we could park in any of the tent sites for CAD$15 – just don’t block the view from the RV Sites (which were MUCH more expensive at CAD$30/nite). We had a MAGNIFICENT stretch of ocean-front all to our selves. We had passed by several turnouts with equal magnificence and probably could have just stopped at any of these, but why not donate $15 to the Lion’s?

We arrived at the very northern-most tip of Newfoundland having traversed what many claimed to be the worst road in Newfoundland. The road was actually not THAT bad…as long as you didn’t try to drive faster than 40mph. Which is sort of our normal pace, anyway.  Only on this road, no one was really trying to pass us. I WAS pretty happy that we had our suspension repaired and in full working order, tho.  And,  the scenery was GREAT,  too! 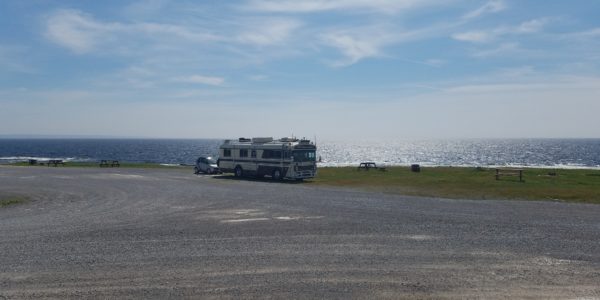 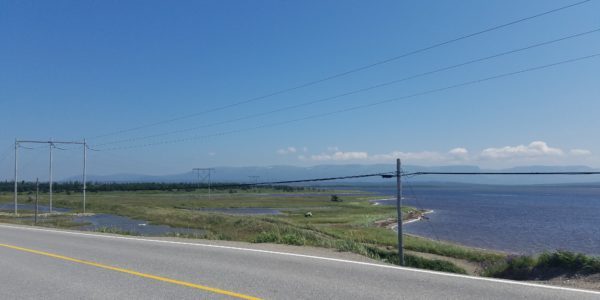 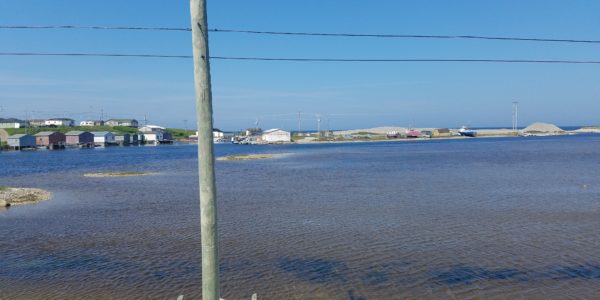 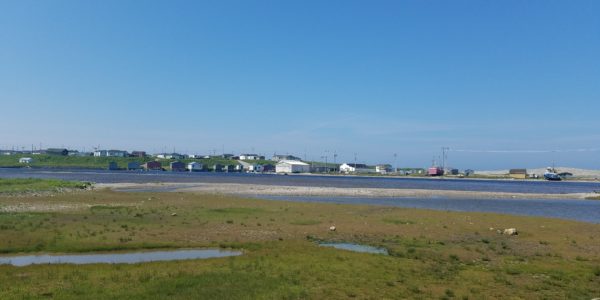 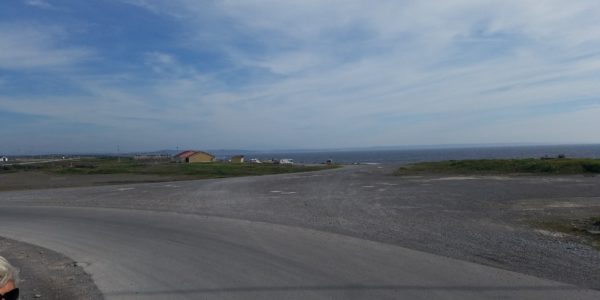 When we turned up at the RV park (the “Viking RV Park”…though no provable or claimed continuous provenance with Lief Eriksson) where I had made a booking, they said we could pick any spot (I guess tourism is down…there were 20 available!). Credit card machine didn’t work…the fella’s wife was on the phone, he said. Which meant BOTH that she was the one who knew how to fix the machine AND she was on the line (as in the park’s ONLY line) so the machine could not authorize our transaction. So we said we’d come back later…leaving RV WHERE YET as collateral. ?

One of the first things we did upon arrival was to prepare the MOOSE STEW from our contraband. I had made a recipe for Guinness Stew (using Beef) a couple of weeks before, and it seemed reasonable that it would work for Moose, as well. Besides, I still had some cans of Guinness on hand! After cutting and slicing and dicing and browning, the stew was ready for the slow cooker – to be enjoyed the next day.

However, I ran into a SERIOUS ISSUE. It seems the recipe called for a bit LESS THAN a full can of Guinness. A Tragedy…whatever could I do with a partial can of the Guinness? Liz hinted at a solution: “I think I may have a glass of wine…”

BTW, the office of the RV park doubles as a restaurant where they have breakfast every day, and MOOSE BURGERS every afternoon. I suspect we can score some more moose meat here – I still have a can or two of the Guinness!!

1 thought on “Shhhh. Don’t tell anyone. WE SCORED SOME MOOSE!”

← Boggy Boreal Forest and Ridiculous Birds ← Whales, and a Whale of a good time!
Next Up

Whales, and a Whale of a good time!

[caption id="attachment_5298" align="alignright" width="300"] Mussels and More Mussels[/caption] Subtitle:  How we fill our days when we wake up with…

[su_pullquote align="right"]Why they call them “ponds” and not “lakes” is not clear to me[/su_pullquote] After leaving St. John’s we began…