Arriving near Vian,  our instructions from hosts, Dave and Lynn Gray went something like this:  “Your GPS will never get you to us.  So here is what you do…take a right at the (one) stop sign in “Downtown” Vian.  Drive 2 miles and you will see a white pickup truck by a gate…”  Worked perfectly.

Driving up the gravel road to their ranch house,  through Cattleguards and over culverts made me question the wisdom of this stop.  Visions of 28,000 lbs of bus stuck in a creek…surely that would test the limits of our “unlimited roadside assistance and towing” policy.   But we made it up the drive and parked on a nice flat spot.

Dave helped with an extra length of extension cord to recharge the batteries drained by attempts to start the generator.  After dinner we retired to their awesome guest house,  complete with OVER-SIZED SHOWER that I can actually stand straight up within! 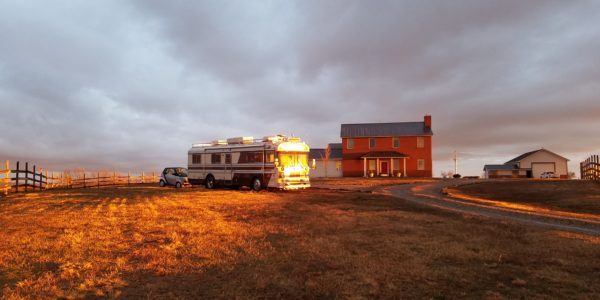 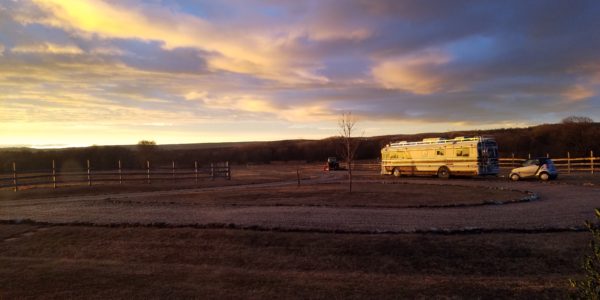 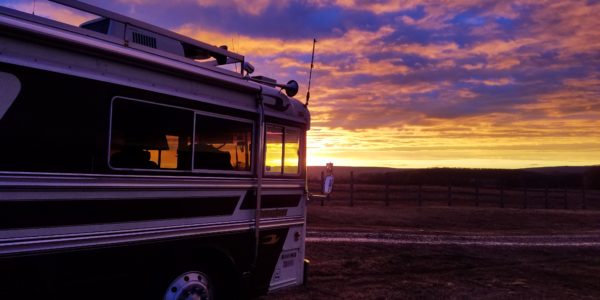 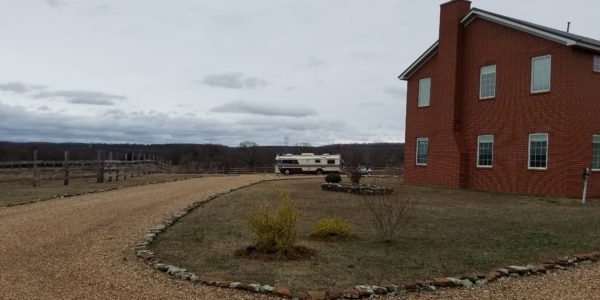 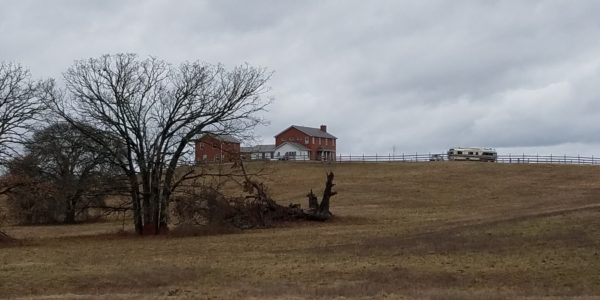 The next day,  plans included a hike and a Dance lesson.  But first,  we had to figure out why the generator would not start.  Dave offered to help, and as we looked at the generator issue,  it became apparent that the fuel line was leaking (dripping gas as we primed the generator was the clue).  This turned out to be simply a rusted hose clamp.   The hardest part of fixing this was figuring out a safe way to get under the bus without risking life and limb.  One Bluebird owner said to me:  if you cannot do a 28,000 lb bench press,  do NOT crawl under your bus without taking MAJOR precautions!    Replaced clamp.  Generator purred to life. ALL IS GOOD for Dan and Liz and RV WHERE YET at Mardi Gras!!!

Dave turned out to be quite a handy guy…and willing to get dirty.  I should not have been surprised…he owns a ranch and there are plenty of cows, mud and stuff that looks like mud but apparently comes from cows…what do I know,  I am from Chicago… tractors, machinery and other ways to get dirty and things to take care of.

Our hike around the Gray’s ranch included a lot of learning-opportunities.  About the Cattle business.  About Beavers.  Coyotes.  Power lines and eminent domain and Section 1222 of the 2005 Energy Act.  About the merits of mixed livestock (Goats and Cattle) for maintaining pasturelands.  I even saw CLOSE UP and for the first time ever, an Armadillo.  These apparently dig up the lawn (actually,  the entire ranch) in search of grubs.  They do not smell the grubs…they just dig until they find one.  They are STUPID, and they have no natural predators.  And they are still one of the last known vectors  for LEPROSY.  Makes me miss the rats in Chicago,  to be honest.

Learning the nuances of the cattle business was especially fascinating.  Calves are born.  Sent to feed lots to be “finished.” This apparently refers to being fed massively until they are nice and fat; not to what most of us whose full exposure to beef is at the Grocery Store might think of as the “Finish.”  That comes later, performed by yet another entity.    Dave (who makes markets at the Merc on Cattle) explained the various ways this works from a commodity point of view.  Who owns the calves, who is speculating on the price of beef, etc.  Lynn described it thusly:  “The kids (calves) go off to college.  What happens after that we do not know or think about.”

We also got our “Dog Fix” at the Grays.  Their Great Pyrenese “Daisy” is tasked with keeping the Coyotes away. She patrols all night, apparently successfully.  We heard yips and howls,  always in the distance, because we heard plenty of Daisy close by.  During the day,  she is quite friendly and effervescent.  WE REALLY MISS Heddy, but it is good to get a fix without long term commitment and attendant logistical issues.

Leaving Vian, we realized (and the Grays encouraged this…) that it is at the center of the US going east-west and also North-south.  More or less,  anyway.  So we hope to come back through again.  And again.

← Bottoming Out…In Sedona! ← To Lafayette
Next Up

[caption id="attachment_1952" align="alignright" width="300"] Walmarts in Louisiana have a slightly different product mix...[/caption] After leaving Vian, OK we headed towards…