Brown’s Bay is a MAGNIFICENT place, with EXCELLENT accommodations overlooking the Bay/Sound/River/Inlet/???? (I am gonna have to learn what to call these things). At the bottom of the hill, a marina, and in the marina a floating restaurant – with an excellent breakfast on weekends. And a couple of resident seals in the area.

While at Brown’s Bay, we enjoyed a variety of activities. One day, a hike of about 6 miles in total to an overlook of Ripple Rock in the Seymour Narrows Shipping channel. This is the site of the Largest Non-Nuclear Explosion ever…as in worldwide!!! As in EVER. I mean, we are in Canada. Not very near anywhere in particular. Canada has no enemies to speak of. Far from any wars. Obviously, there is a story here!

It seems there was an underwater rock formation that is smack-dab in the middle of the Discovery Channel, used for shipping. Not even 3 meters deep at low tide, and creating massive eddies and whirlpools when the tide moved past (very fast at the narrows). A VERY dangerous situation — 20 large and hundreds of smaller vessels had sunk after encountering this hazard. Engineers had tried for years to remove, explode or otherwise eliminate, to no avail.

In 1955, a solution was envisioned. Dig a tunnel under the Channel and up into the outcropping. Load that tunnel with an explosive similar to Dynamite. A LOT of dynamite. 1,400 tons. After three years of tunneling, in 1958 the explosives were detonated. The resulting channel is now deep enough for even the large cruise ships that currently ply the Seymour Narrows on the way to and from Alaska from Vancouver.

While on our hike near Ripple Rock, we did finally discover UNFRIENDLY Canadians (which is really NOT an easy task). What a relief…everyone here is SOOO friendly it was starting to wear on us!

We needed us some surly!

The unfriendlies emanated from a beehive that Liz stepped on (naturally, she was leading on this particular stretch)! Immediately after which she started screaming and careening back down the rocky, steep trail – pretty much over and through me. Liz has had a severe reaction to bees before, so we were a little worried. But as it turned out, in this case and with these bees, she was more likely to be killed by a broken neck incurred during her rapid exit! A few red, painful welts did develop and were the only lingering effect.

We made several other excursions during our time in Brown’s Bay. One to Campbell River. Nice coastal town where the Rotary has created a great little walking trail and the town has reconstructed the waterfront, all by the ferry terminal.

And, we found a Microbrewery…Beach Fire Brewing Company. Seriously…we happened upon it, not even looking for it. If fact, our target was the local Dairy Queen, which we did make it to AFTER the Brewery (for dessert!).

Anyway, we enjoyed a tasty flite and heard about the brewing business from the perspective of the first Craft Brewer in Campbell River. They said their initial task was education…apparently the locals think of Corona and Labatt Blue as Premium “Craft.” Getting them to try a Stout or Sour or,  eeeagads, a Double Black IPA, was not happening, at least not at first. So they started with some nice, lighter styles. I think they were genuinely pleased to have customers who actually asked to try their Stout!

We also spent some time organizing the new Bike Rack we acquired to hold the new bikes we also acquired. No place in Campbell River had any kind of bike cover…or even a BBQ cover we could press into service. One place suggested a Motorcycle cover…which seemed like a great idea. Walmart stocked one and it is perfect for the task. 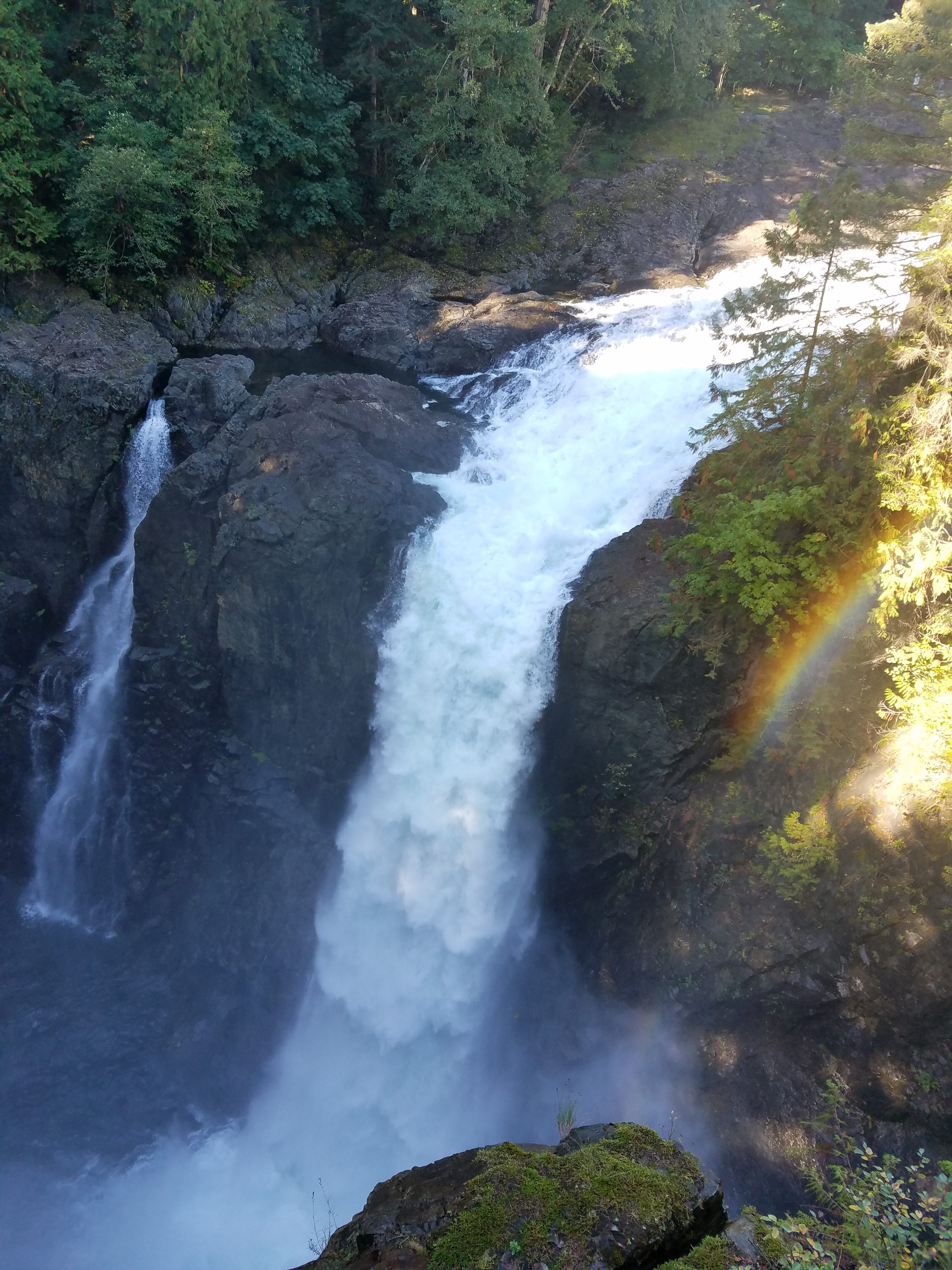 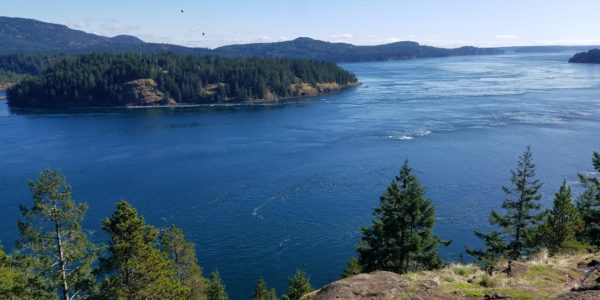 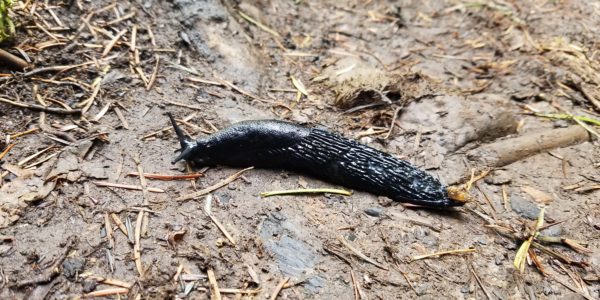 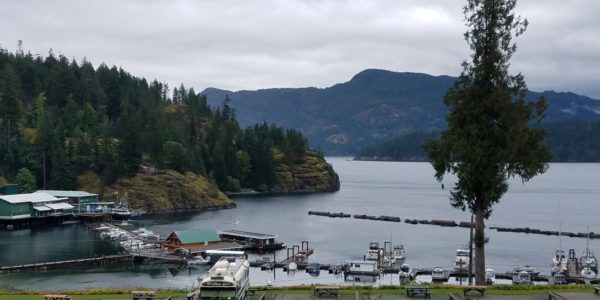 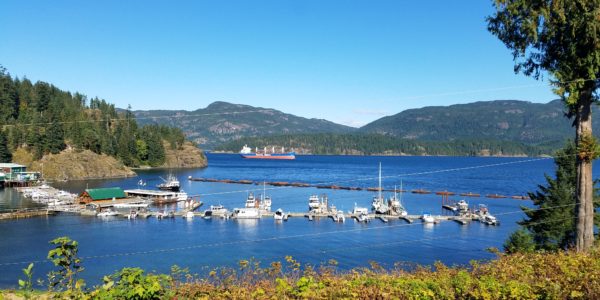 And finally, we researched the issue of Tire Chains. Not really wanting to, but with road signs advertising the legal requirement after October 1, we thought we should consider our options. Our friend, fellow Bluebird Owner and soon-to-be-host Peter from Courtenay, BC said we would never want to actually USE tire chains…if the weather is that bad we would certainly stop and wait. (Roger that!) He said he drives south in January and carries chains, but he has never used them. If he did, he said, it would ONLY be to get to a safe place and wait out the weather. We understand there are similar legal requirements in Washington, Oregon and California. SO it seems we should do SOMETHING.

Considering we hope to never need them…

We went to a truck place in Campbell River, and the fella at the desk showed me “real” chains. That is, chains that are meant for real trucks (our tires are the same as a Real Truck, so would be the appropriate chains) and for drivers who plan to (must) drive in conditions demanding chains. These are HUGE, and heavy. Some have studs on the links and look like medieval weapons.

Considering we hope to never need them, we asked what other options there might be. He suggested Tire Cables…much lighter-weight and smaller-to-store than chains. Usable for emergencies and makes one legal when chains are required. That sounds like just what we needed.

Of course, he did not stock them and no one else in Campbell River did either. Peter assured us that we will not see snow anywhere on Vancouver Island Before 13 Oct. (and the RCMP would be very unlikely to hassle us about not having chains). So, when we return to the states we’ll see about acquiring Cables.

After a planned brief visit to Courtney and friends Peter and Susan, our next stop will be Tofino, on Vancouver Island’s wild west coast. This is a place where the winter season rates are as high or higher than summer because people go there to see wild pacific storms crash onto shore.

As long as there is no snow involved, because we don’t have chains!!

1 thought on “Up Island”

← Who Knew the Bus Could FLOAT! ← To Courtenay, Tofino and Canada’s Nessie?
Next Up

To Courtenay, Tofino and Canada's Nessie?

Thought for the Day (Click here) Back to normal after our dose of Unfriendly Canadians, we were again absolutely smothered…

Who Knew the Bus Could FLOAT!

[su_pullquote align="right"]I was hoping that the hardest part of this would be SPELLING TSAWWASSEN. Or Swartz.[/su_pullquote] Our next adventure involved…