Our days in Tofino passed peacefully and relaxingly in zen-like calm. Wind was calm, too, and it hardly rained. Tofino “natives” (i.e. those with actual Canadian Passports) say this is rare. We took advantage of both, though.

The RV park has free Starbucks Coffee in the morning…perfect for a walk on MacKenzie Beach just yards (ooopps, meters) from RV WHERE YET. And in the evening, Sunsets are magnificent from the beach. In between, there is a nice bike trail all the way into town in one direction and out to Cox Beach in the other. 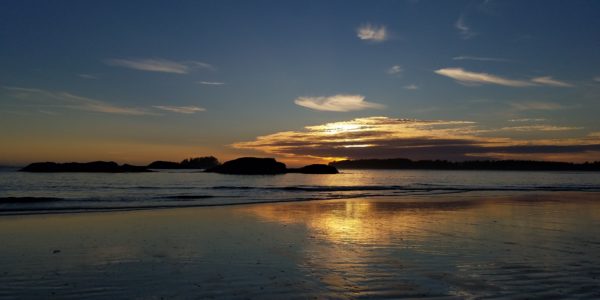 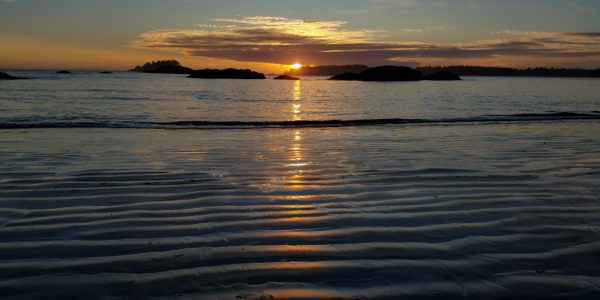 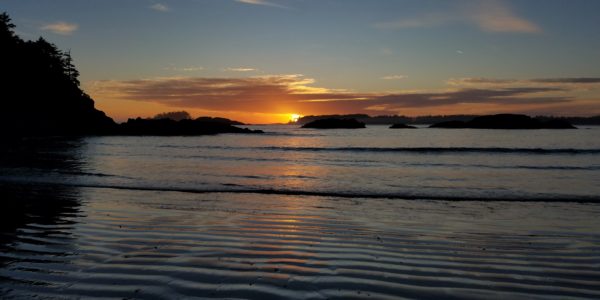 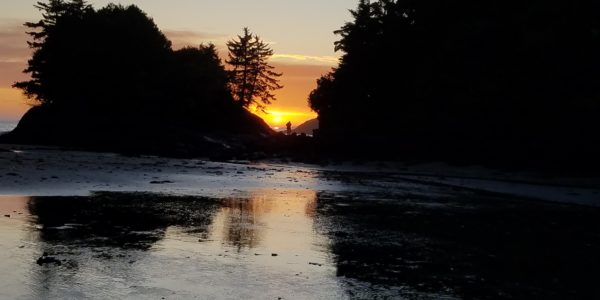 The latter is a surfers mecca and there were a LOT of folks out there doing whatever it is one does at a surfers mecca. Sent a Pic to our friends Tillman and Susanna, surfers from Colorado (what???!!!), who said something to the effect of “WOW, BIGWAVES!! Is the water cold?” Since everyone was wearing full-body, neoprene condoms, I assume so, but have no first-hand knowledge.

Our bike riding also included a stop at Tofino Brewing Company. We had already sampled their wares at our two Cubs Viewings, but we thought we would go straight to the mother-lode. There we discovered a taproom operating under a manufacturer’s license. Meaning, they could serve only ONE PINT/DAY/PATRON. This allowed us to have a flite of 4, but not of 5. No prob. I had the Kelp Stout previously! The Double IPA was tasty! And, the Bar Tendress did disclose that her memory was quite suspect and there also might be a shift change…in case we wanted to come back later.

We also found local tradition “Big Daddy’s Fish and Chips.” This is a Food Truck that has become so popular that they added a dining porch! Sue from Courtenay exclaimed that these were the best F&C anywhere. I am sure F&C are like Chicago Pizza…everyone has their favorite and thinks you are an idiot if yours is not the same. But we don’t have the time or inclination to do extensive research, so we took Sue’s word and suggestion and visited Big Daddy.

After the Thanksgiving holiday, the RV park cleared out so fast we thought there might have been a tsunami warning!! Good thing there wasn’t because there is NOWHERE one can go within 30 minutes of where we are that is significantly above sea level. There is apparently a major subduction zone just off shore, according to locals, so a warning would give minutes to escape. Since it takes 15 minutes to air up the bus, our escape would be Clown-Car-Only even if it was possible. Happy to have beaten the odds.

As a result of the mass exodus, and our stay extending 2 more nights, we had our choice of satellite-friendly sites where we were able to watch Cubs games. Also a good thing, because the Secretary of The Treasury would not authorize additional trips to town for these events no matter how die-hard a fan she is. Never mind the thought of actually paying Primo-Tofino Prices for the chance to watch the Bears get their new rookie QB killed for the first time. The Hawks were on, too, in Trono. The Satellite got a workout Monday!!!

Tuesday, our last in Tofino, was projected to be a little showery. So we decided to drive down to Ucluelet, which is a fishing (and now tourist) village south of Tofino. Another place hard to spell…so most people just call it “Ukee.”

← To Courtenay, Tofino and Canada’s Nessie? ← Victoria and the Terrorist Pepper
Next Up

Victoria and the Terrorist Pepper

The drive back to Victoria was relatively uneventful. Same Twists, turns, narrowness, steepness and potholes as the outbound leg. A…

To Courtenay, Tofino and Canada's Nessie?

Thought for the Day (Click here) Back to normal after our dose of Unfriendly Canadians, we were again absolutely smothered…