Our stay in the bay area included lots of fun stuff. These last couple of Santa Cruz Pics wrap up that phase of our adventure. 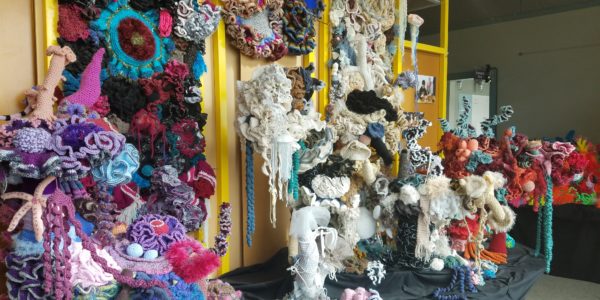 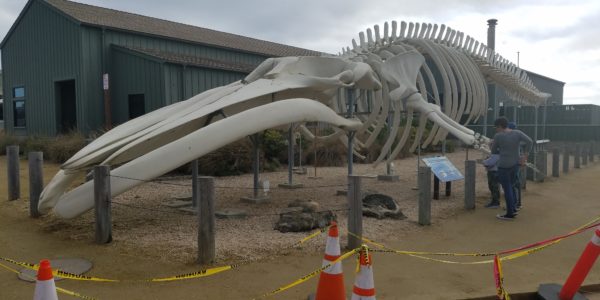 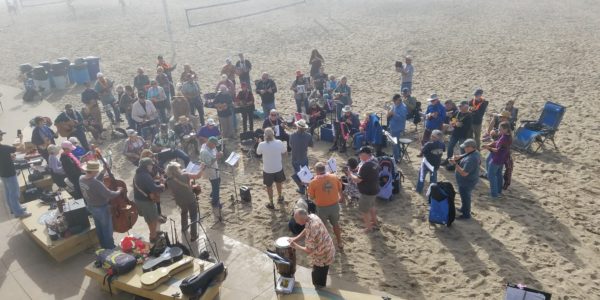 On the way out of town, we discovered (and therefore acquired t-shirts reflecting) for SURE the BEST Collegiate Logo ever! The UC Santa Cruz  BANANA SLUGS. (Go Slugs!).

But all good things must come to an end. To be replaced by more fun stuff! Our target was Las Vegas, where we intend to store RV WHERE YET for the winter. More on that later.

On the way to Las Vegas, of course, there were lots of things to see. The terrain changes drastically from the coast inward. Through the artichoke capital of the world (with thousands of undocumented-rapists busy at work in the fields – ooops, sorry, politics!), across some mountains and into the Mojave Desert. There, in the city of Mojave is a graveyard for commercial airliners. And in Boron one of the world’s largest open-pit mines…And Peggy Sue’s 50’s Diner and Diner-Saur Park.  You cannot make this up!

In Yermo, Ca., where the Marine Corps has a huge logistics base, we parked overnight at the abovementioned diner, had a diner meal and visited the diner-saurs. For evening entertainment we watched the Marines drive Stryker troop armored carriers and tanks around the perimeter of the base at high speeds, load them on trains, etc. 24×7. I don’t know where the vehicles were going (or coming from) or why they were being driven like they were competing in some sort of Bizarro NASCAR event, but I am sure we are all the safer for it.

And fortunately all of this frenetic activity was downwind from the diner parking lot as the cloud of dust they kicked up was impressive! 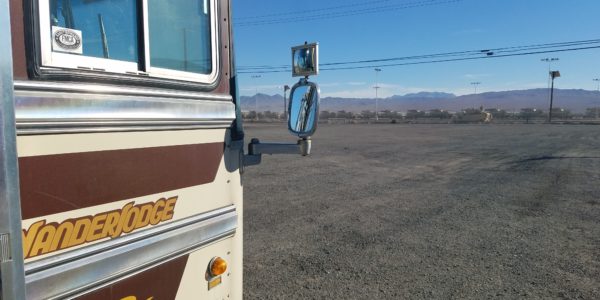 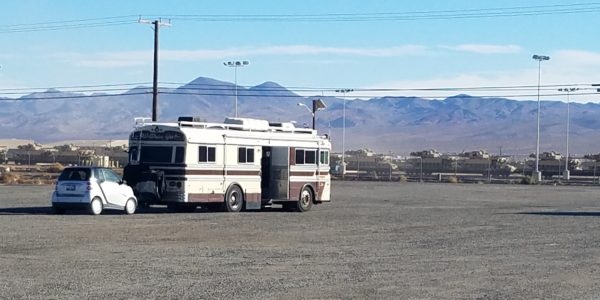 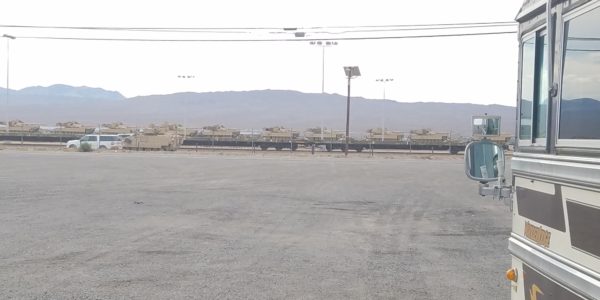 When we got to Las Vegas, we had some work to do to prepare the bus for “winter” storage (Storage? Why? Stay tuned!). First, we found a diesel truck shop that would do an oil change so we can leave the bus with fresh oil. These guys were flexible, helpful and relatively inexpensive, so we’ll use them for a full Preventive Maintenance and a list of minor things when we get back in the spring.

We have learned,  in our first year+ on the road that Truck Mechanics are much more likely to be fair to us than RV Mechanics.  The latter seem to view us as a Boat Payment, and most have never seen a Bluebird,  so we’d be paying not only for their boat, but for their learning curve.  The former,  once convinced that we are NOT an RV, but actually a carefully disguised truck, seem to just want to quickly and efficiently fix things.

Next, we needed to buy and inject antifreeze into the water system. I realize that Las Vegas is all about playing the odds, and the odds are that there would not be weather cold enuf to require such winterizing; after all, “Winter” in Vegas MIGHT see a day or two in the 20’s once a decade or so.  But I recall CLEARLY one visit to Vegas where I deposited $0.75 in a Coke Machine and it DID NOT GIVE ME A COKE. So, my history with playing the odds in Sin City are not good, and we surely don’t need the aggravation of a broken pipe — $15 of antifreeze seemed a better play.

And we needed to give the bus a good rinse…to get salt from the coast and sand from the Mojave off of everywhere. This was done at SNS Truck Wash and BBQ; a place recommended by the Truck Repair Shop (probably as much for the BBQ than the wash). Many people in RVs spend HUNDREDS on a wash and detail…SNS charged $35. I don’t want to say RV WHERE YET gleamed, but it was definitely a brighter shade of Beige.

Then, we worked hard at emptying the fridge of all condiments and half-used jars so we could defrost it and leave it empty and off for the winter. Some of our items were welcomed by others in the RV Park…for example a half-bottle of Baileys found a good home. We also had some creative meals with unusual ingredients in this effort, but some things just couldn’t be disposed of EXCEPT in the trash. For example, we could not imagine, much less find a recipe for a rotini, mayonnaise, dill-pickle and sriracha-based casserole.

Finally, we needed to sort through clothes and shoes and coats, linens, etc. to ascertain what among this was coming with us when we leave LV sans-bus, what was going in the trash and what was staying in the bus. For the latter, we acquired some plastic storage containers …Liz is concerned about critters getting into things.

All of these were accomplished while staying at the very nice Las Vegas RV Resort…which is also where the bus will be stored. Just down the street from Sam’s Town…a decidedly off-strip Casino where breakfast was very cheap.

While in LV, we ate some meals in local restaurants (even finding a family Mexican place with a more-than-passable Burrito!). Not much else appealing there…Considered attending a Las Vegas Golden Knights Hockey Game, but the scalpers wanted WAY TOO MUCH for a ticket.  And,  shades of Dollar Bill Wirtz, the GK’s seem not to be on free TV either.

Speaking of the “Golden Knights,” what a STUPID NAME and LOST MARKETING OPPORTUNITY.   They should have been called the “Las Vegas Hookers” — a double entendre  reference to both Hockey (Hooking) and one of Las Vegas’ best known industries.

So, what’s this we have hinted about when discussing “Storage” for the winter (if you can call what LV experiences “Winter”).

Once RV WHERE YET is firmly ensconced in the secure area of Las Vegas RV Resort, we will jet off to Minneapolis for Thanksgiving, Chicago for Doctor/Dentist Appts and then… We leave for the other side of the world on 18 December. Our plan is to spend almost 3 months in Australia and New Zealand.  Beginning with a Kiwi XMAS, we’ll be spending time with friends, moving by rental car, staying in AIRBNB’s (as well as with friends) and travelling throughout in a low-key way.

It is fair to say that our mode of transit for the next few months will be more variable, generally modern and much faster! And largely experienced from the wrong side of the road!!!

We will be posting notes and thoughts once we arrive down-under.

In the meantime, our wish for all our friends is to enjoy the break from our newsletter, Peace, Prosperity, Joy, Health and Happiness with family and friends (and not necessarily in that order!) over the coming holiday season.

7 thoughts on “To Vegas…”Winter” Wonderland!”

← The Bay Area — not like ANYWHERE ELSE. ← Radio Harris is Back on the Air!
Next Up

Radio Harris is Back on the Air!

We programmed several stops into our itinerary throughout the Bay Area. All of these for the purpose of visiting friends.…