We have “slowed Down” a bit.  Our “schedule” is now more of a guideline.  We have to be in Flagler Beach Florida (near St. Augustine) on 19 March to meet friends Barb and Bob White.  That gives us almost 3 weeks from the time we left Lafayette.  So we decided to use that time to travel a bit of the Mississippi Blues Trail!

Our first stop was a BRILLIANT RV Park across the river from Nachez, Ms.    We crossed the river and walked around Natchez a bit.  Found a really nice coffee shop owned by the same folks who operate a Blues Club next door called “Smoots Grocery.”   Unfortunately,  the latter was closed for renovation (our visit is during a decidedly slow period in Natchez).  We also stopped for a beer at the “Under-the-hill Tavern” which is the oldest continuously operated establishment on the Mississippi.  This tavern is right across the street from where the American Queen river boat was currently docked…every Thursday all summer long. 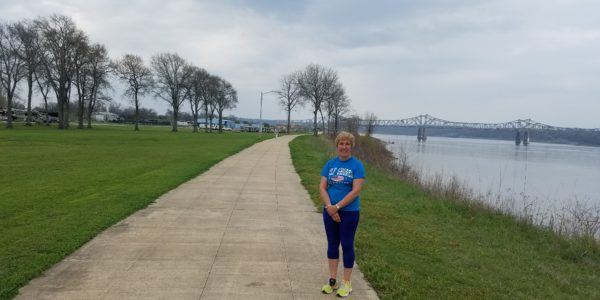 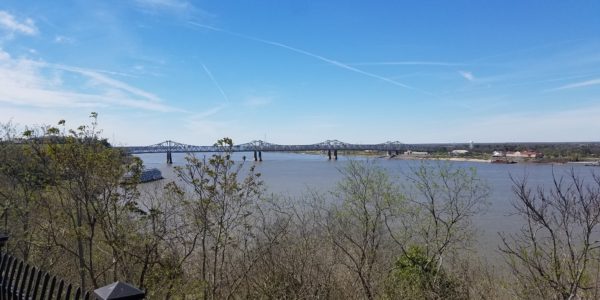 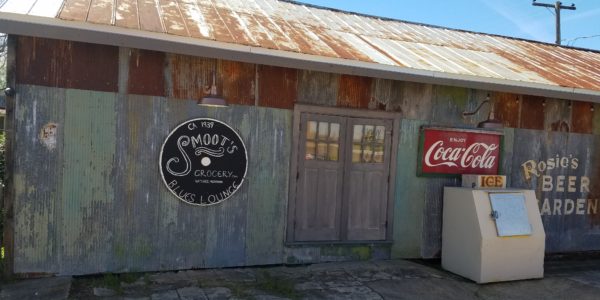 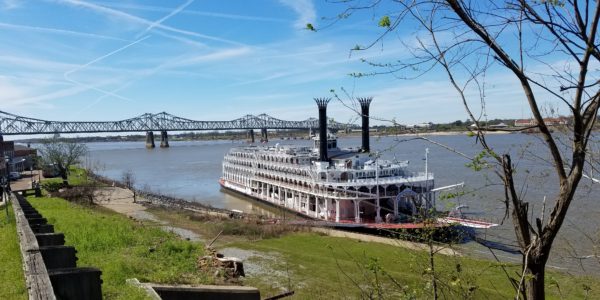 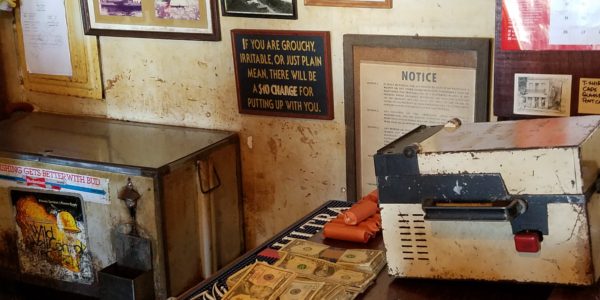 Next,  we headed north to Greenville, Ms.  Greenville had a very nice County Park right on the banks of the Mississippi.  The access route to the  park,  which our RV-oriented GPS thought suitable for RV WHERE YET,  was quite an adventure.  Thoroughly rutted, semi-paved and two-way-but-one-lane down the middle of a cotton field…but we survived to enjoy a couple of sunsets over the Mississippi.  AWESOME.    Best part:  $13/night.  County Parks are the BEST! 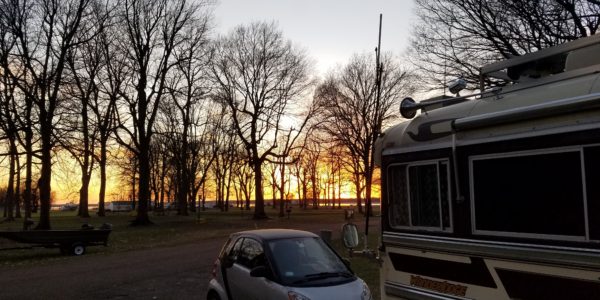 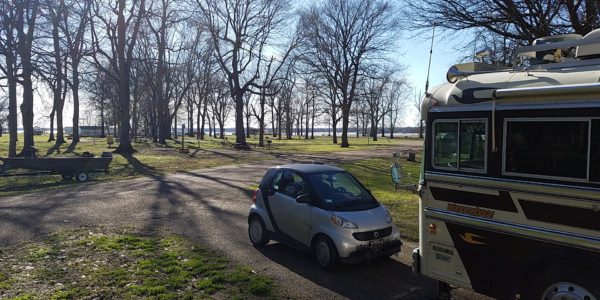 While in Greenville,  we found a pretty nice Blues Club:  The Walnut Street Blues Bar.  Our waitress,  Cookie, had us sign the guest book…she guessed right away that we were not from around there!  Tap beer was served in large Styrofoam cups.

They had a band from St. Louis.  This band was a lesson in NOT reading a book by its cover.  Band Leader had a cowboy hat and massive tats.  Naturally,  spoke with a southern drawl.  I assumed this would NOT be Blues, tonight.  I assumed wrong!  The band was definitely Blues,  playing only their own stuff (no hokey covers of “Sweet Home Chicago”) – even politely explaining to a drunk patron who asked for a Stevie Ray Vaughn tune (they did actually remind me, too,  of SRV) that they only play their own stuff.  And were REALLY EXCELLENT.

Unfortunately,  we also learned that smoking is still allowed in Mississippi Bars.  We had forgotten what a smoky blues club was like,  and we could not stay for more than one set.

Greenville was only about 30 miles from Indianola, Ms.  Which is where BB King is basically from.  There is an excellent museum there,  with lots of retrospective video and information.  BB’s grave is in back and his tour bus is in front.  Peeking in the windows of the latter showed the wear and tear of 300+ days on the road every year.   And,  the souvenir shop had the ultimate take-away…a Flyswatter named Lucille!  (You cannot make this stuff up!).  Not that Indianola is on the way to anywhere,  but if you ever find yourself passing through,  definitely plan to spend a few hours there. 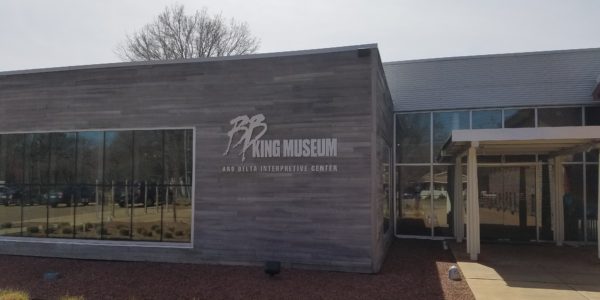 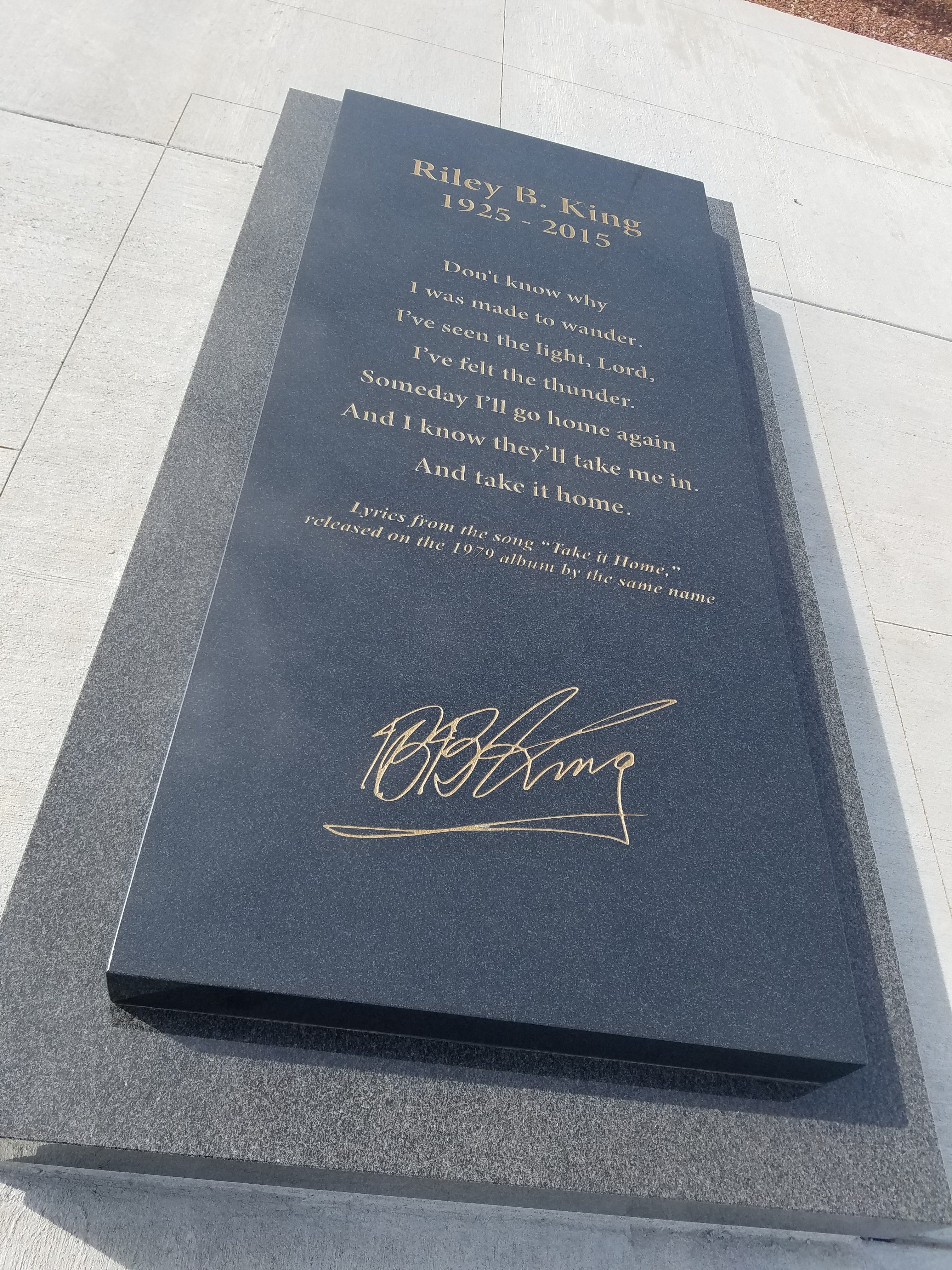 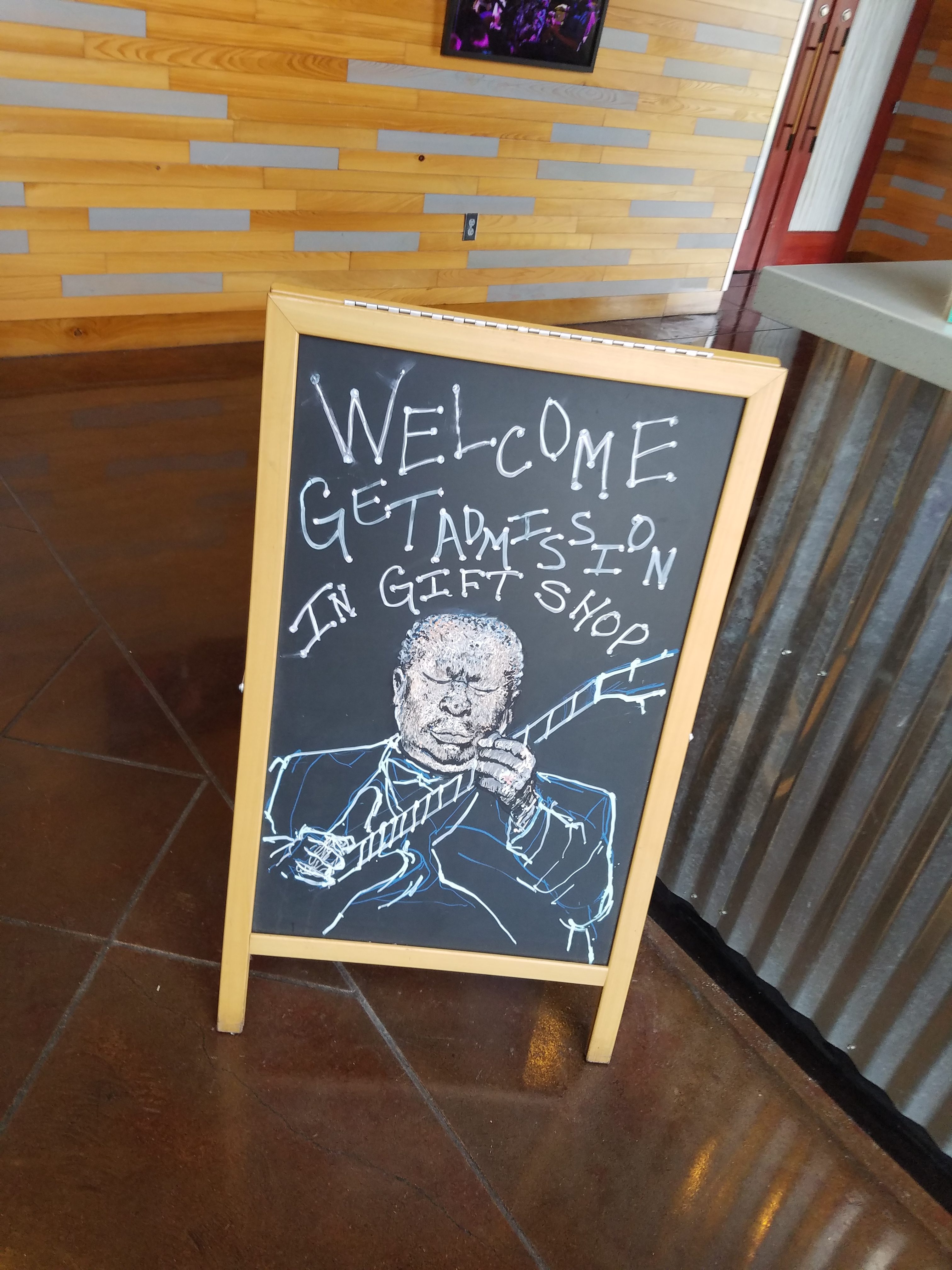 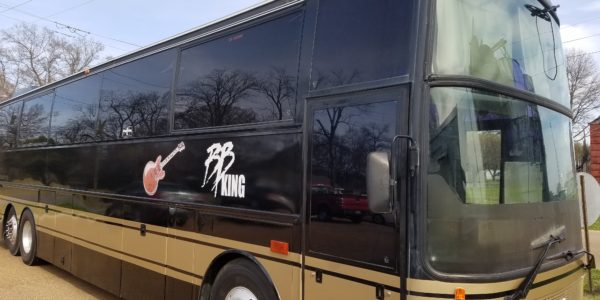 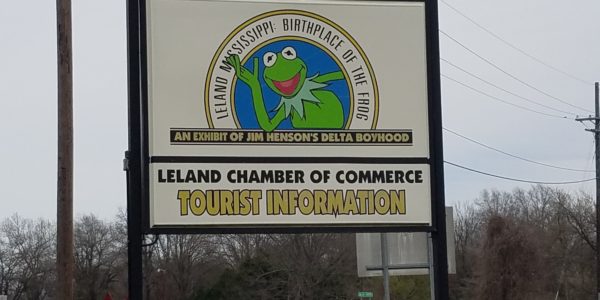 Greenville was also about 70 miles from Vicksburg, Ms.  so we drove down and spent the day at the Vicksburg Military National Park.  There,  we drove on 3 separate tour roads reflecting the Confederate and Union trenches and gun positions.  An enormous amount of historical material,  from plaques, to actual field artillery pieces in place as they would have been.  And an App to guide your tour.  As you drove miles along Union and Confederate trenchlines, up and down ridges and valleys, the scope of the conflict became obvious.  It was a dreary, rainy day,  and this somehow felt appropriate for reflection at a place where thousands were killed as the Union fruitlessly attacked and the Confederates repelled attack after attack.  Vicksburg was never “defeated,” the Confederates were ultimately starved into surrender. 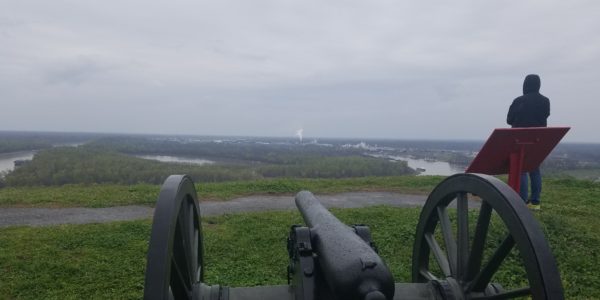 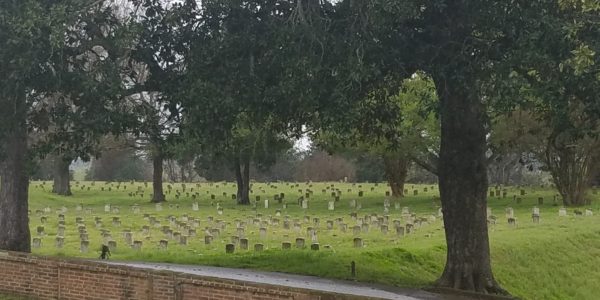 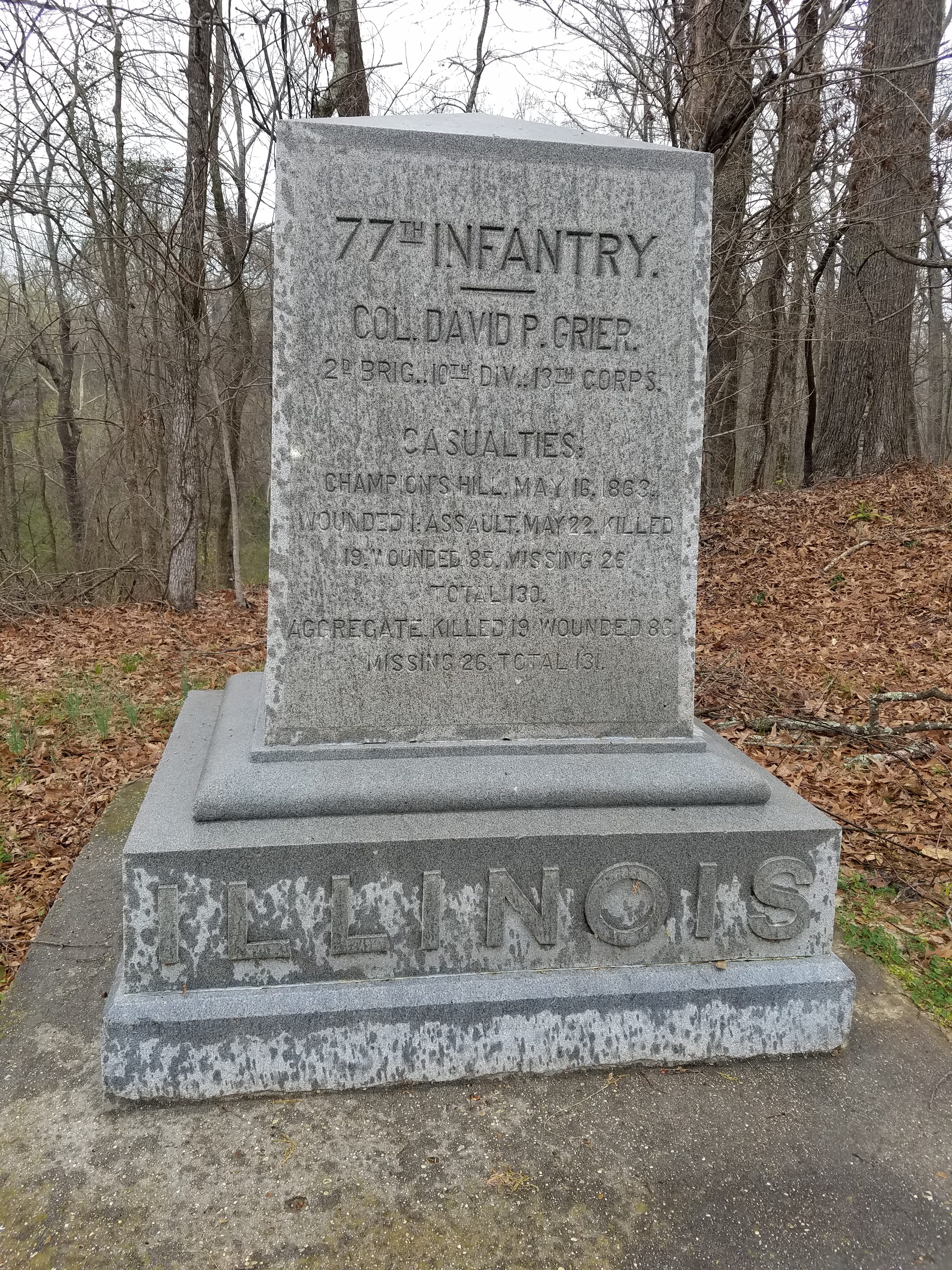 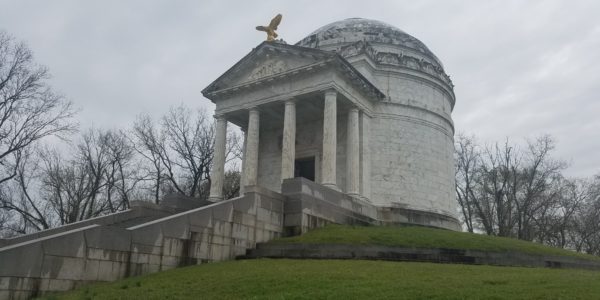 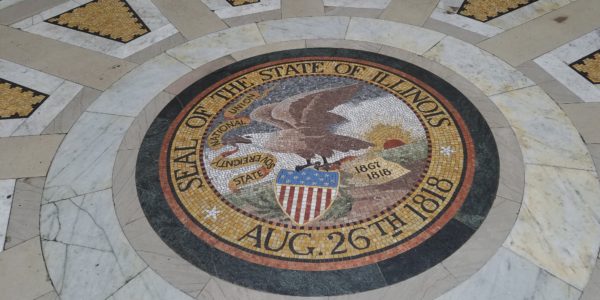 Vicksburg Military Park also has an awesome exhibit about the “Brown-Water Navy” including the salvaged river Ironclad “Cairo.”  The boat exhibit,  including complete steam engines – the largest and best preserved example of these –  and the naval cannons – 13 of them — was fascinating.   One plaque posited that the Union’s ultimate success (in the “War of Northern Aggression” – as it is sometimes jokingly(?) referred to down here) was more due to its excellent navy and naval leaders than to the considerably more famous Infantry and Cavalry Generals and brutal battles.  Reading about the efforts to secure the river thereby cutting the Confederacy in half – with Vicksburg an absolute key to this as its guns overlook and command the river – was new information for me. 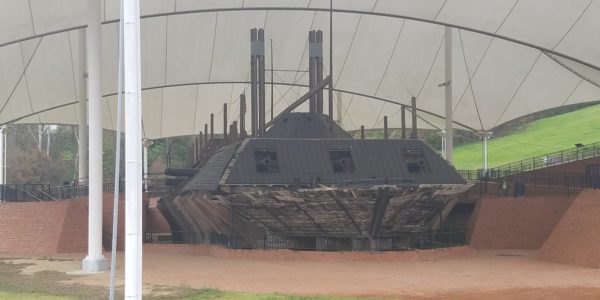 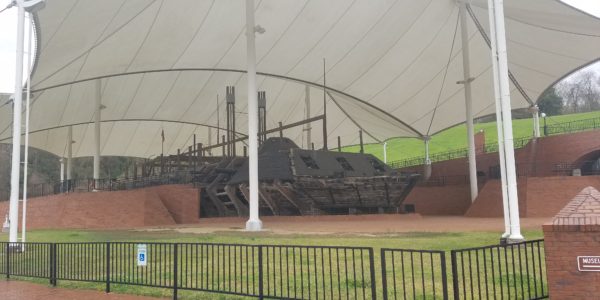 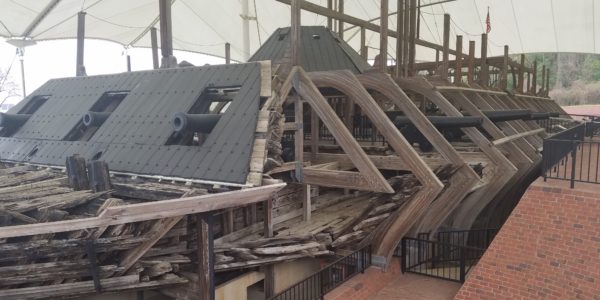 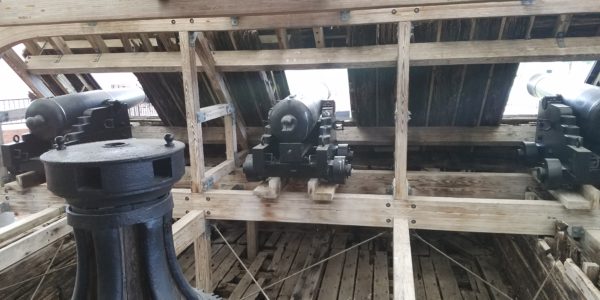 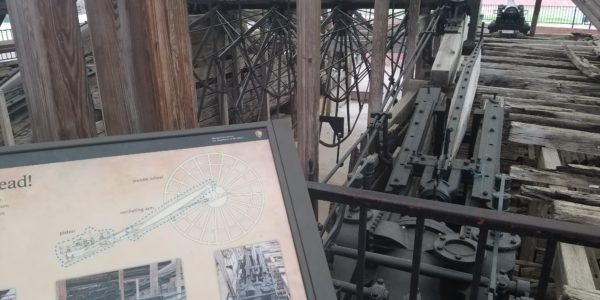 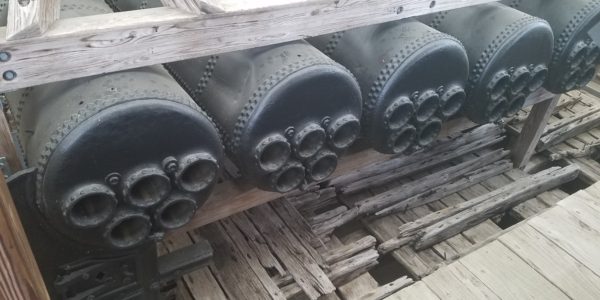 From Greenville,  we headed to Hattiesburg.  Weather was predicted to be quite stormy,  so we decided to stay put a couple days,  do laundry and just relax.  Not much to report from here.  “Okatoma RV Resort” was really off the road.  Near the Okatoma River.  On the way into the part,  we watched the fire department putting out a major conflagration on a trailer in the park…YIKES.  As we carry all three possible flammable fuels (diesel, gasoline AND propane) and a full electrical system (12V and 120V),  we thought how easily that could be us…

Anyway,  the park’s WiFi was broken.  I offered to fix it (I had a pretty good idea what was wrong).  The manager offered to barter free rent…Liz does not want me to unretire, but,  I am wondering if bartering skills for free rent isn’t a very “retired” way of thinking?  Did not have to make such drastic decisions here since the manager did not have time to work on it,  with the fire going on and all. He thanked me and said if we ever come back this way… Friend Mike McDowell said MOST RV PARKS need technical assistance of the professional variety.  Hmmmm.  Liz and I need to have a talk…

If Variety is the spice of life...

Mardis Gras.  This is a post about 50 shades of.   Having been to MG in New Orleans back just after…