As we were exiting Utah, it came to pass that my nephew declared/committed to Gonzaga Basketball for 2021. AND, it seems, he was invited to play in The invitational Iverson All Star Game in Memphis Tennessee.

We had been watching as many of Chet’s games as we could stream this past year, including the Minnesota State Championship game, which his team won for the fourth year by a score of 80-29 (Last year was only the sectional title because COVID cancelled the state tourney). We thought it would be great to see Chet in a game where ALL the players are TOP RUNG (normally Chet is, though very modest,  head-and-shoulders –both literally and skill-wise – above the rest), going to TOP SCHOOLS.

And my sister an B-In-Law would be there as well!

So we pointed RV WHERE YET towards Memphis. COVID precautions were in play, but we were fully vaccinated and I knew a guy, and he got us tickets!!!

The game itself (in Memphis, due to relaxed COVID Rules compared to Philadelphia) is put on annually by Reebok and hosted by Allen Iverson. It features that year’s top 20 or so High School Seniors. These kids have already committed to schools (all majors, like Duke, Gonzaga, Memphis, etc.), so the event is really a venue for NBA Scouts to see the following year’s draft possibilities without violating Amateur Athletic rules.

Before my family arrived, we had a chance to have a couple meals with Brian Walsh, who lived next door to us for years in Chicago.

Brian made sure we were adequately BBQ’d, and one day he took us to a FANTASTIC Mexican Deli for lunch in an office complex…we would have NEVER discovered this on our own, that’s for sure! It was great to catch up!

Then the Fambly arrived, and we learned of an interesting nuance: The parents were NOT ALLOWED to participate in ANY of the scheduled activities surrounding the game. These consisted of tours to museums, organized lunches and dinners, photo shoots, etc. Plus the “Skills contest” and the game itself. The positive side of this is we got to spend the entire weekend with my sister and B-In-Law.

The kids activities were highly structured, because, as we later learned, there is hardly any thing on the planet as sleazy as “amateur” athletics at an elite level.

For example, one evening as we sat and chatted on the hotel patio, Chet came down to say hello. Someone came to our table with SIX basketballs under his arm, and asked Chet to sign. To which he responded as requested by the NBA-sanctioned tournament, “Sorry, we are not allowed.”  In part because all these kinds of requests can overwhelm if every one is granted.  But also…

Because many of these “Fans” asking for multiple signatures are simply going to turn around and sell the autographs.

Makes you wonder about the athletes who have a bad reputation for refusing to sign autographs “for little kids and hospital patients…” Maybe there is more to the story, like a disgruntled memorabilia pimp?

And then there was the gaggle of suggestively attired barely-out-of-high-school girls, seeking to land a future ball player, that collected in the hotel parking lot. Best that the kids WERE sequestered and carefully monitored!

Seeing all these potential landmines for the kids, all I could think was how fortunate Chet is – his parents are WELL versed in how the world works. David, in particular, played in the Big Ten, and was exposed to some of the same pressures. Many of the kids at the classic and their families are potentially blinded by the bling, and have already hangers-on along for the ride.

While the kids were practiced up in seclusion, we did some Memphis-Tourist stuff. BBQ was featured, of course, but also a visit to the National Civil Rights museum. This is centered on the Lorraine Motel, where MLK was shot in 1969. The museum entrance is adjacent to the hotel, and the path through the exhibits is linear in time and space. It takes about 2 hours, and as you follow the programmed path, you suddenly arrive at “the end,” which is the actual room/balcony where the assassination just as suddenly ended Dr. Kings’ life. It’s a metaphor for all the events that lead to that moment, and is a VERY moving exhibit and museum.

As for the Game and all the festivities surrounding, THAT was fun! It was portrayed as a “Battle between #1 recruit (Chet) and #2 recruit” – a kid named Paolo Banchero. The media tried to make them enemies, locking horns and doing EPIC battle. The truth is, far from battle, the kids like each other and have a lot in common, being highly ranked and surrounded by sleaze.  Chet off to Gonzaga and Paolo off to Duke.

Oh, and Chet was named the Iverson Player of the year – the best of the very best, and he had a great game against great opponents. We can’t wait to watch him play at the next level, and at the level after that!!! 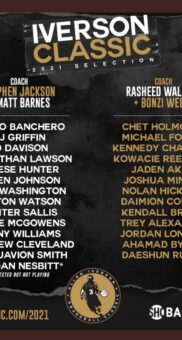 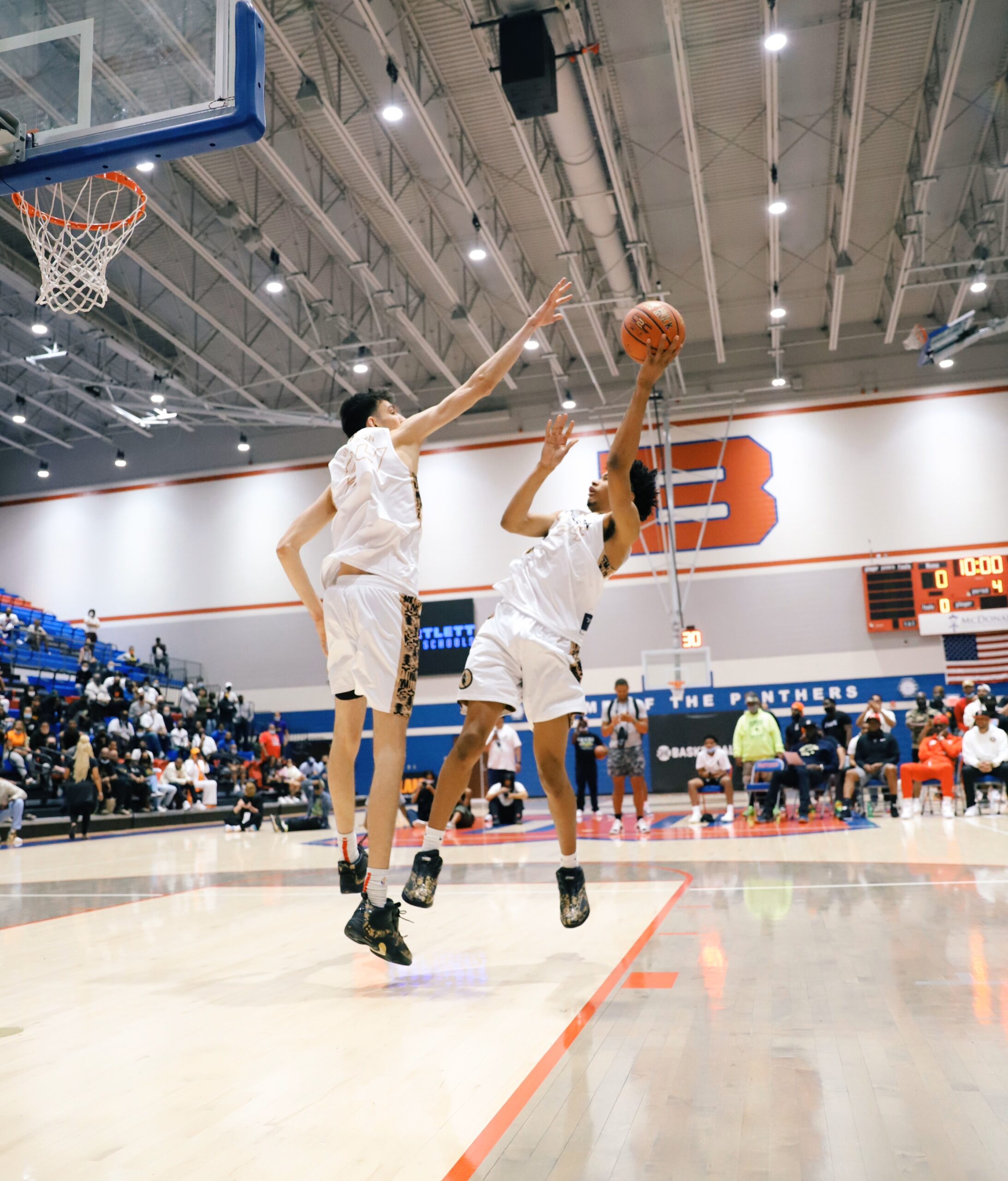 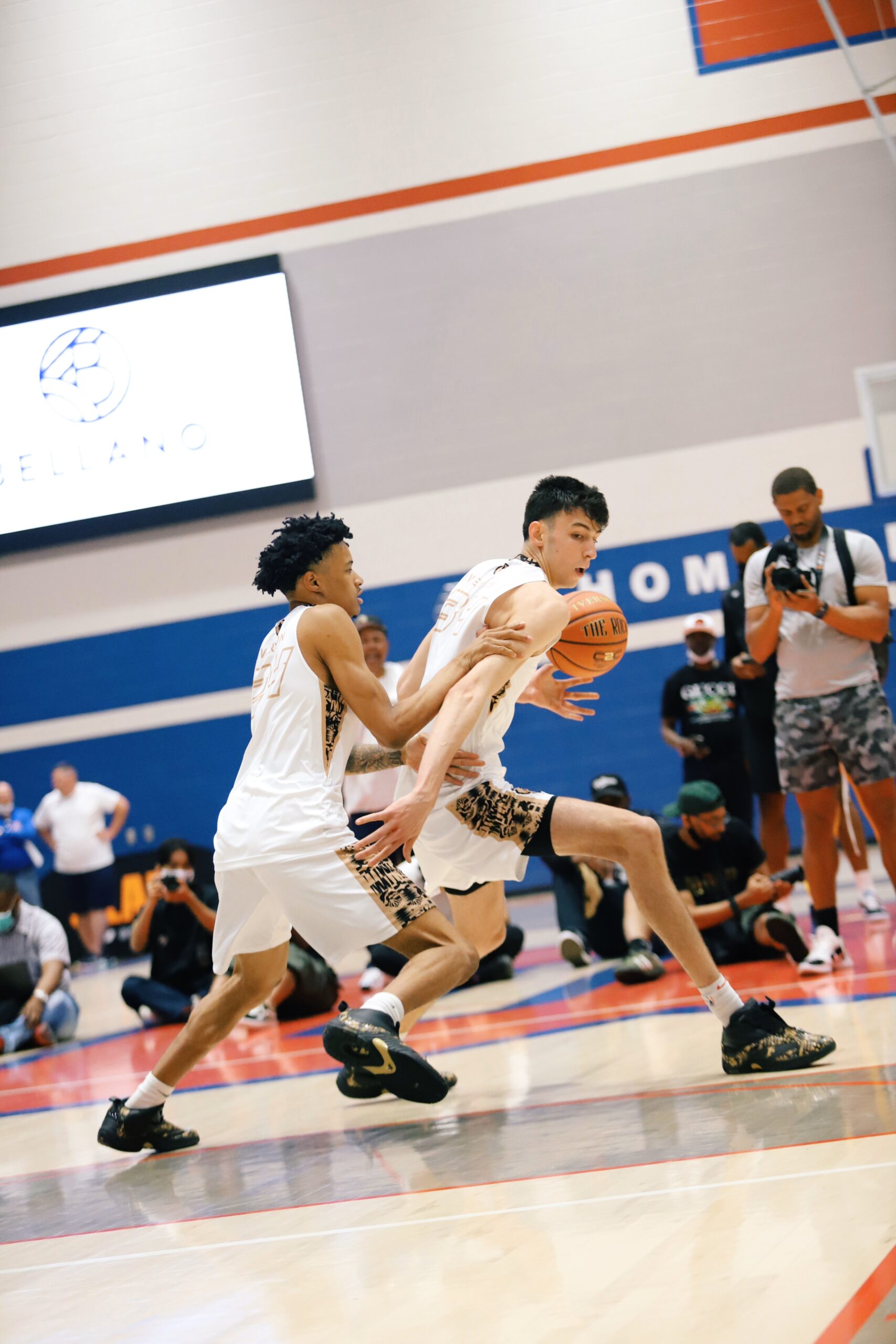 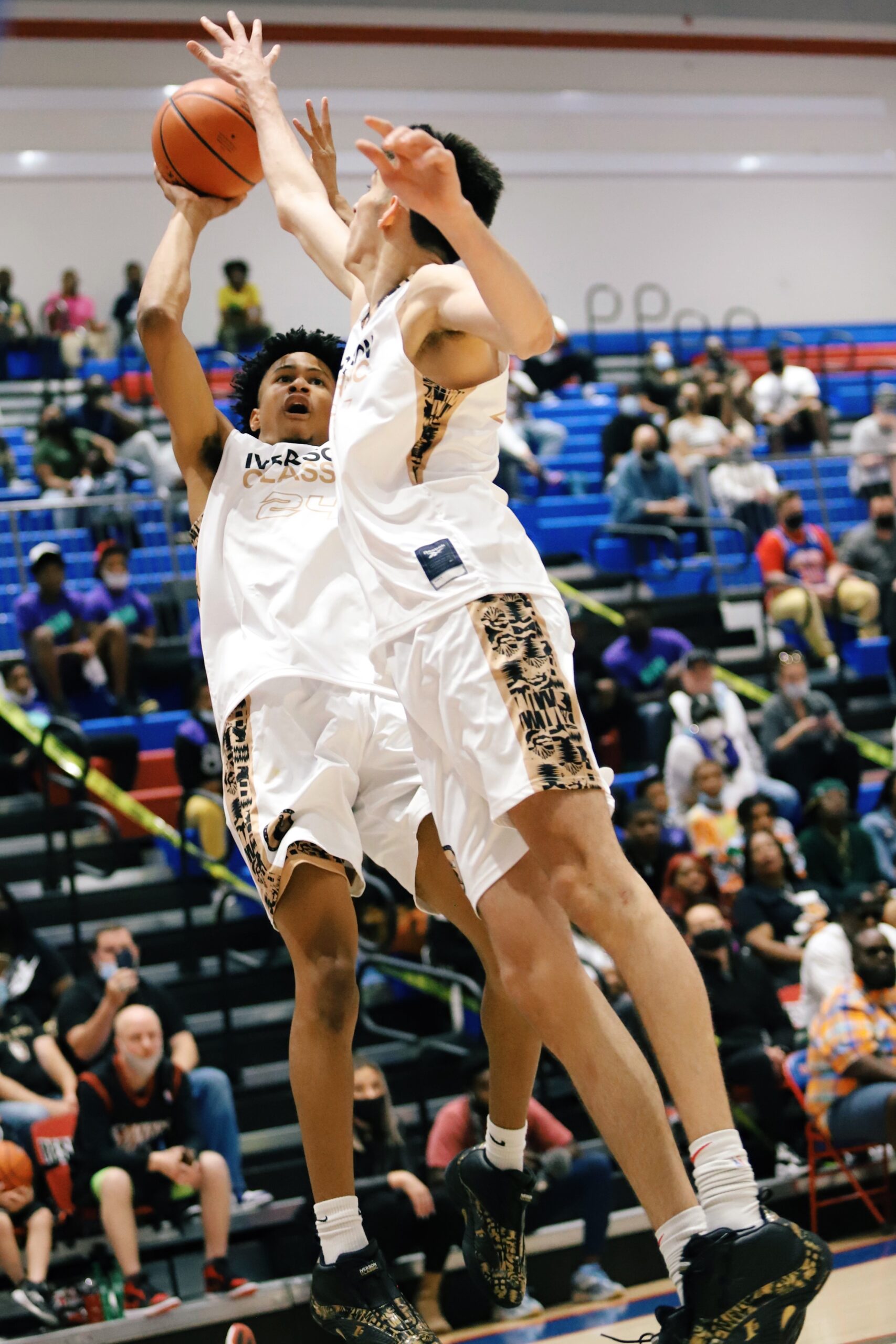 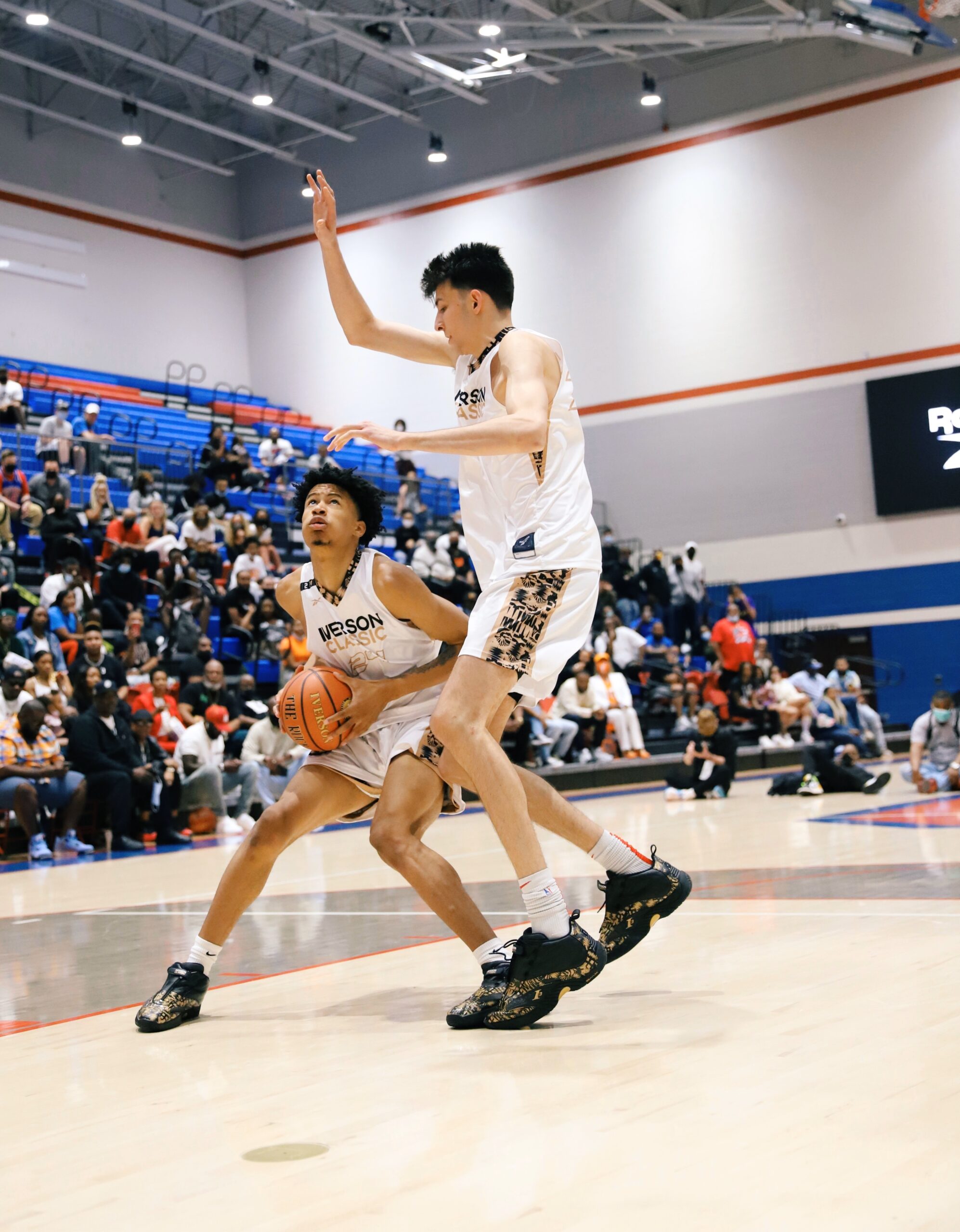 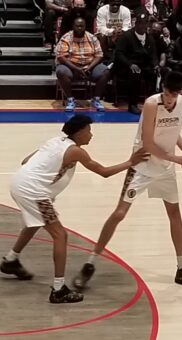 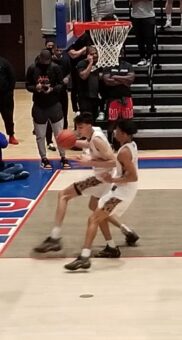 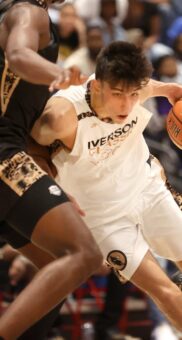 (Pictures from Iverson Classic,  Jackson Sun and others)

And then there was my favorite Pic of Chet, sort of summing up the art of being a teenage kid and a budding star…

Speaking of which, while the Gonzaga schedule in its entirety is not known, we do know that the Zags play Duke IN LAS VEGAS on the day after Thanksgiving this year! The Harris family is already planning to descend; wondering what T-Day will be like in Sin City?!

This is not something I ever thought or wanted to experience!

So, while in Memphis, I also took the time to look into what seemed to me to be impending tire issues on RV WHERE YET. A bit of a shake at certain speeds. Took the bus to a Tire place, where they discovered some bad wear patterns on tires that are effectively aged-out already.

I have learned that Bus tires need to be replaced LONG before they wear out due to invisible aging. When a car tire fails (35psi), it makes a little noise and you pull over to the shoulder. When a bus tire fails (120psi, and supporting 30,000 lbs of bus) it is like a bomb going off…you do NOT want that happening! The best way to prevent this is to replace tires at about 5-6 years…and ours had some wear issues to boot.

The tire shop in Memphis COULD have sold me 6 tires (@ $400 ea) — I was ready to write a check!  But assured me they COULD NOT do an alignment on the bus. Despite the fact that the manager told me this while leaning against the truck alignment rack in his shop! Translation: despite being NOT BUSY, he could not be bothered to sell me well over $3k of goods and services. I have heard of other RV owners being given this kind of treatment at truck shops, but it has never before happened to us.

As it turns out, we have TRIED to leave a substantial amount of money at several tire shops. So far, all but the one in Memphis would’ve been happy to, but could NOT get tires for me with a “Born on” date in 2021, and I will not accept tires with a significant fraction of their lifetime gone. One said they could, ordered them, and when they came in, they were dated 2019. I asked if they would give me a 30% discount to compensate for the 30% of the tire life gone? NO WAY so NO THANK YOU.

Still working on leaving money somewhere,  which you would NOT think would be so hard…!!!

We left Memphis, headed for Muscoda, Wisconsin, and the MOREL MUSHROOM FESTIVAL RALLY. This is hosted every year by Gary Shilling, and we went a couple years ago.

This year was a bit different…the Gun Range where the RV sites were and the Rally was situated BURNED DOWN, so we collected at Gary’s pole barn and had a jolly good time!

THE HOUSE ON THE ROCK, well, ROCKS!!

One of the rally events was a visit to “THE HOUSE ON THE ROCK.” Like the Wall Drug, this is a place whose signs we have driven by for YEARS. The Rally decided to go, and I expected Wall-Drug-Level tourist hell! But, THE HOUSE ON THE ROCK, well, ROCKS!! I HIGHLY recommend a visit to this place — spectacular exhibits of weird stuff.

For example, an ENTIRE ORCHESTRA of animatronic musicians playing their instruments, which are pneumatically actuated. Imagine a Player Piano – the keys depressing as the tape rolls. That is a children’s toy compared to what we witnessed at THOTR. Now imagine fiddlers fiddling, drummers drumming, horns horning [sic], etc. And all IN TIME – playing music! And basically NONE OF IT digital – all gears and pistons and so on. Jaw dropping amazing, Unexpected and VERY enjoyable!!!

And, with my recent history keeping RV WHERE YET operational, I can just imagine the ongoing upkeep to keep all the animation animating!

Near Muscoda was a Tire shop that Gary had heard good things about. Of course, they could not get recent tires.

So, we left Muscoda and headed back to Chicago, where we had dates with destiny (and Doc and Dentists) and Liz had the most imPOtent appointment of all!.

RV WHERE YET was parked in the boatyard, way in the back behind a couple absolute MONSTER boats.

The pic shows the incongruity – it is NOT an optical illusion or strange projection like Mercator World Maps that show Greenland bigger than South America (it is not) – the boats were Enormous.

While there, we managed every one of the Chicago Foods we crave (sometimes more than once!) AND I did some work on RV WHERE YET’s Electrical organization – to correct some of the issues we had keeping things unfrozen last winter. Even though we plan to spend next winter in Starbase, Texas, (where Elon Musk is sending folks to Mars), which is about as far south as you can be, we know from experience that does NOT mean it is always above freezing. 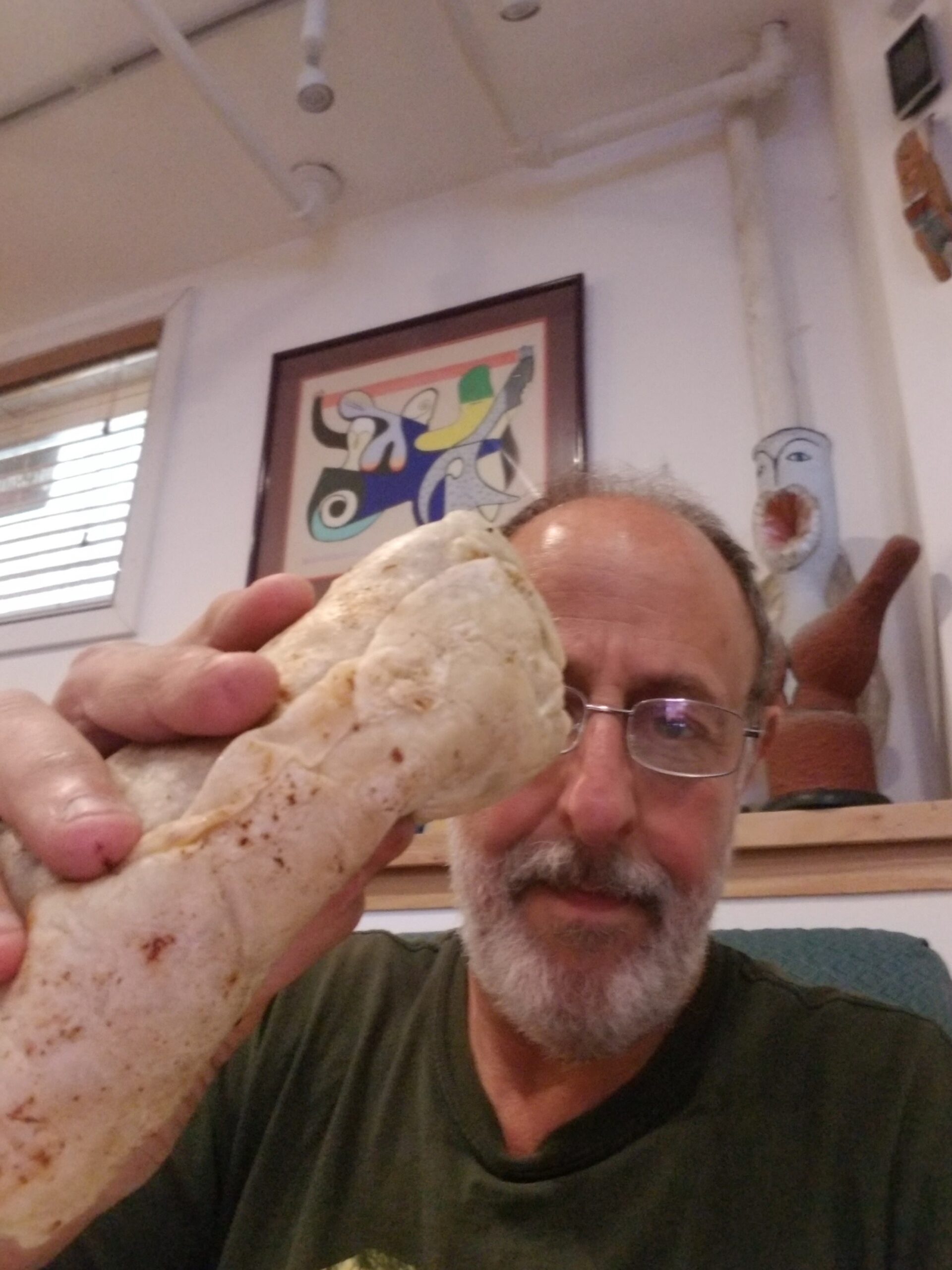 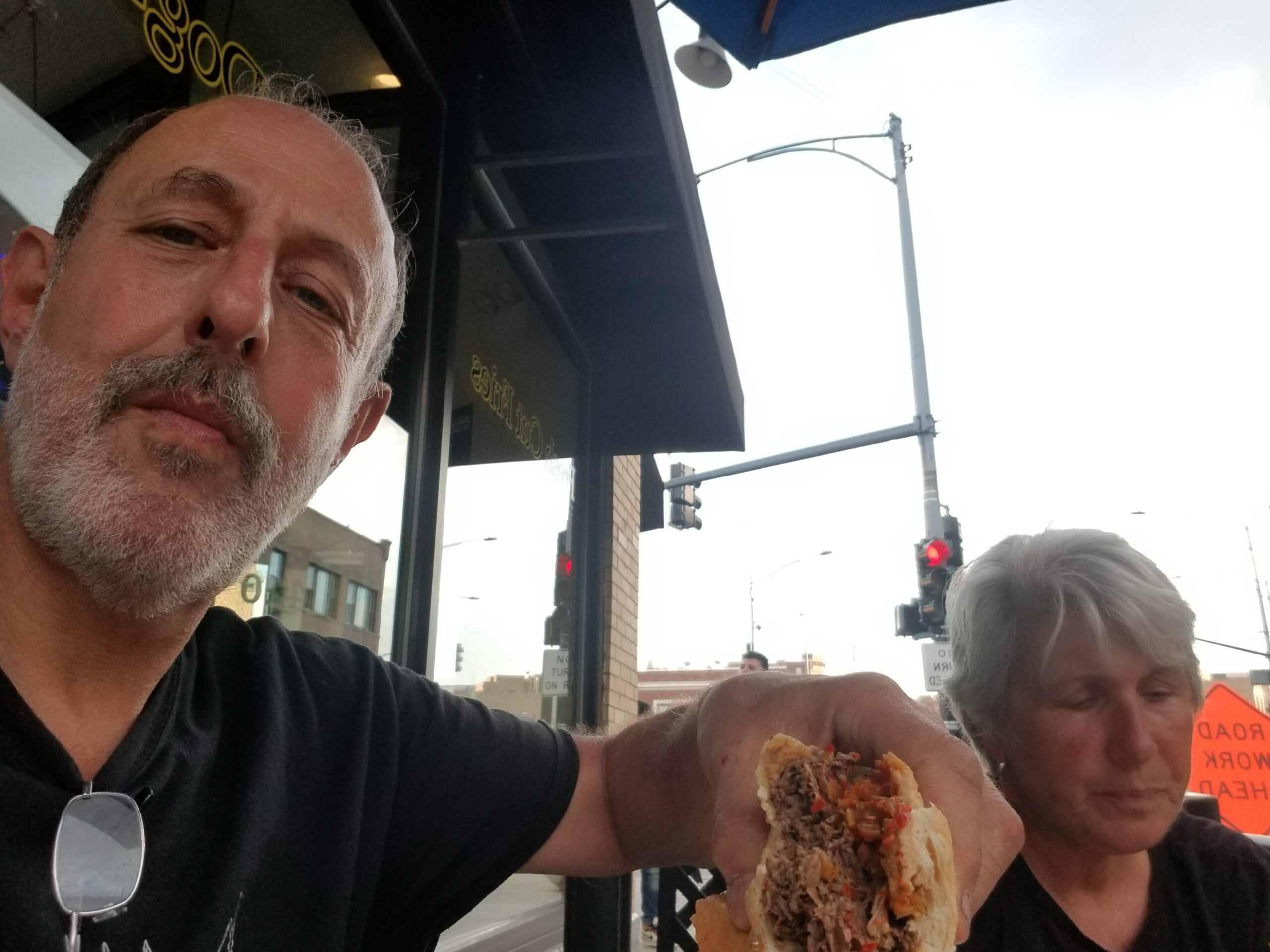 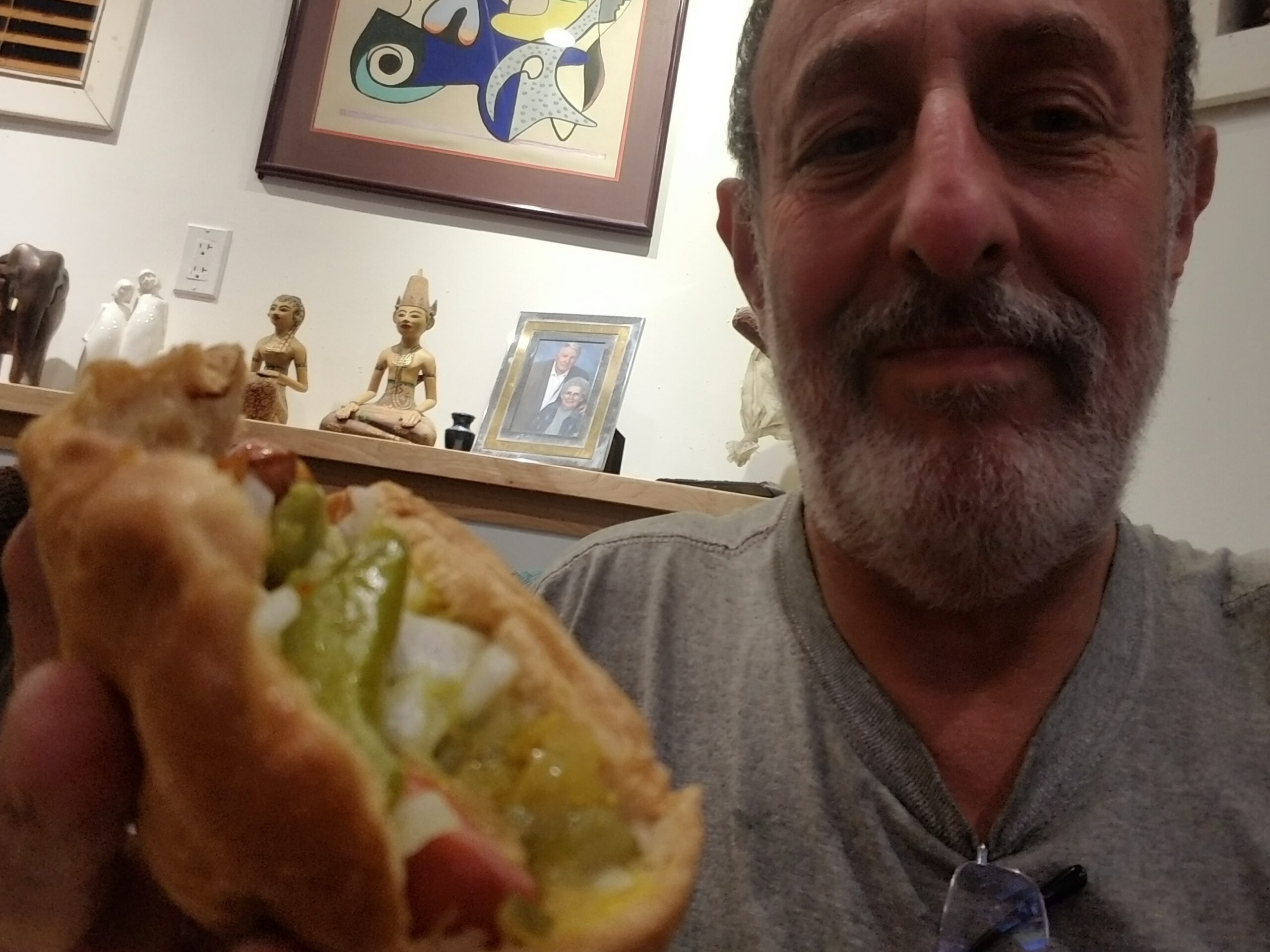 We even had a “Cousin Eddie” Moment in Chicago! For the record, there is a Sewer Clean-out pipe, we did NOT dump in the gutter!

Next up is…Who Knows! Still need Tires, and still working on that. We are gonna spend a little time in Northern Indiana – RV Capital of the world. We need to find a couch arrangement that is a bit more comfy for Liz (apparently 40 years old foam is not so much!).

For the record, Bob is BOTH a Fabulous furniture maker AND a Fabulous Friend!

Some of that involved parking in Barb and Bob White’s Driveway again, so our fabulous furniture maker friend could help us noodle on sofa-solutions.  After that, maybe Minneapolis for Father’s Day because Dad’s building is now open to the public with all residents Vaccinated and safe. They did a GREAT job keeping the residents safe, but it is GREAT that they don’t have to worry anymore, being fully vaccinated!

And after THAT, who knows!!! Watch out, maybe YOUR DRIVEWAY?

← More “You cannot make this Sh*t Up” than any post to date!!! ← Big Daddy and New Shoes for Baby
Next Up

[caption id="attachment_9816" align="alignright" width="225"] Ordering Burritos!!![/caption] Our last installment had us in Chicago, eating, drinking and making merry with friends.…

More “You cannot make this Sh*t Up” than any post to date!!!

Thought for the day (Click here)... [caption id="attachment_9672" align="alignleft" width="300"] Cruising Again![/caption] Once we finished with Utah (and I assume…