After leaving St. John’s we began a rather aimless wandering around the Newfoundland countryside.  Which is a BEAUTIFUL PLACE, in a very North-woods, Boreal Forest-Boggy sort of way. By that I mean LOTS and LOTS of little ponds and lots of stunted Evergreen Trees.  Very few people.  Very VERY many mosquitos.

At least the road did not have a precipice next to it for most of the time.

Our first day of driving was not particularly pleasant.  It was REALLY WINDY – a cross wind for the most part.  Roads not the best.  Oh,  and as you go up and down hills,  you ascend into the cloud deck at about 150m (475 ft).  Near 0 visibility. Then back out of it again.  Briefly.    Generally speaking,  tho,  driving has been more than pleasant,  with scenic and peaceful vistas of all kinds.

Our wandering took us in the direction of Elliston, NL.  This is a place where there is a large colony of Atlantic Puffin. This is a RIDICULOUS looking bird…like a cross between a Parrot and Pidgeon except it swims like a duck and has a multicoloured bill, goofy orange feet and a white belly.  It is pelagic – that is lives out at sea almost its whole life.  It eats small fish, despite looking more like it should eat Green Eggs and Ham.   These birds nest in borrows on little colony islands, away from land-based predators, and late July is PEAK season for this.

It just so happens that Elliston has such an island mere feet from shore.   Far enuf, still, to eliminate the usual ground-based predators.

Took awhile to find it as it was not marked by any signs,  but once you DO arrive (which is obvious because of the well-travelled trail and the donation box), seeing the puffins is pretty straight-forward.

Except,  the day we got there it was SUPER windy, and just as we completed our walk out onto this rocky, exposed point near the puffin-island,  a squall line came through.  Temp. dropped,  wind further INCREASED (it was already 25mph gusting to 40 so more than that!) and a cold rain began.  We decided we’d come back the next day, walked back to the car in the driving rain, drove back to the RV park and tried to warm up.

The next day the weather was VASTLY improved.  The Puffin Colony was active…the ridiculous birds were flitting about,  catching little sardine-like fish and disappearing into their burrow.  They would fly quite close to where we were standing – reputedly if you sit quietly they will land at your feet  or even ON your feet.  That never happened to us;  I assume this story was fun at the expense of the CFAs?

We learned something else about Elliston:  It is the self-proclaimed “The Root Cellar Capital of the World.”  You cannot make this stuff up!  Apparently the soil is too thin and rocky to actually GROW anything,  but perfect for storing things grown elsewhere. The hillsides are literally littered with Root Cellars, and the Chamber of Commerce (if there is such a thing in Elliston, NL) decided to capitalize on this strength.

Near Elliston is Bonavista, NL.  This is the place where Giovanni Caboto (AKA John Cabot) landed in 1497…claiming Canada for England.  The town of Bonavista has a “Matthew Legacy” museum.  The “Matthew” was Cabot’s ship,  and there is an EXACT REPLICA floating insde a building.  Quite a spectacular thing to see and appreciate. 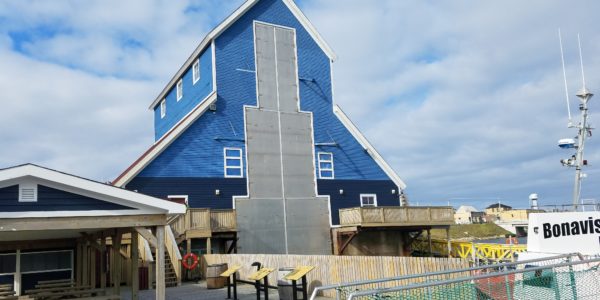 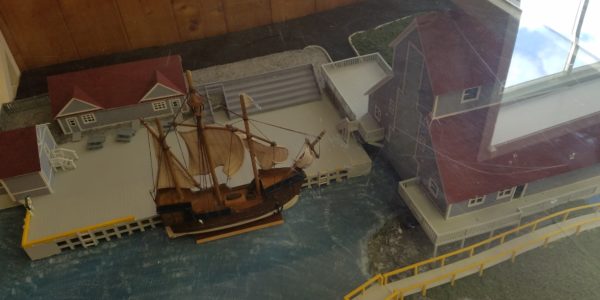 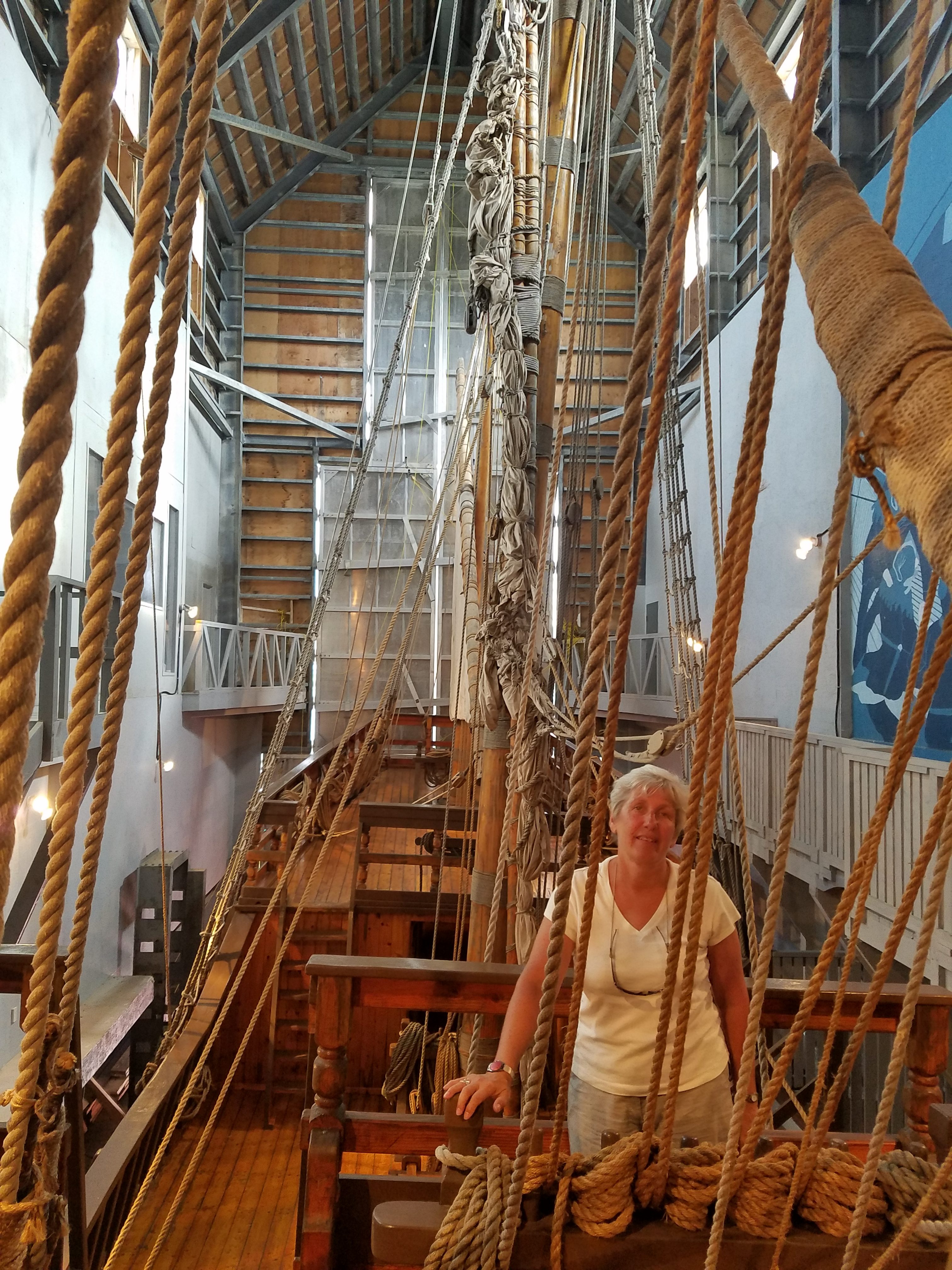 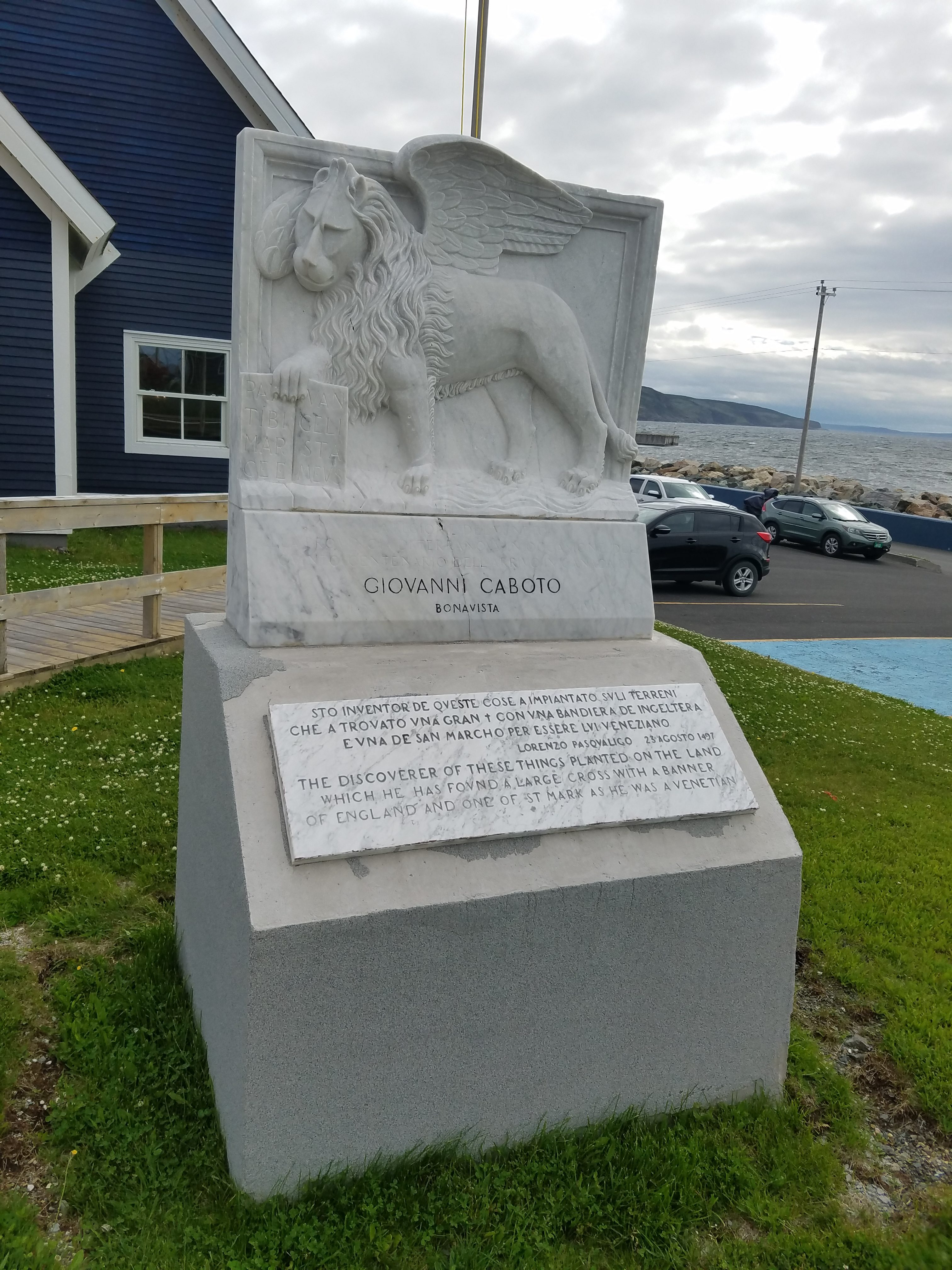 We wanted to buy some Moose Meat…perhaps to make a stew, or BBQ a steak.  Something you would think you would be able to do easily in a place where moose may outnumber people and CERTAINLY outnumber cattle.  But NO.  Not so!  We were advised by the butcher at a supermarket that moose meat cannot be “sold” per se, without a special license possessed by both the seller and sellee.  He said to just ask people…someone would tell us where we could get some,  and could even offer us some out of their own freezer.

It did feel a little weird,  asking random people under streetlights, “Psst.  Hey buddy,  got moose?”  You’d think we were looking for heroin!

One guy said “I can get you one.”  I said, “A Roast?  A Steak?”  He said,  “A WHOLE MOOSE.”  I thanked him…told him the size of our fridge on the bus would make that impractical.    One person suggested going for a drive almost anywhere in the evening – we’d come back wearing one on the Clown Car and looking for a knife,  not a moose!

Finally,  a couple we met in a Brewery suggested a couple of small-town butcher shops.  NEITHER panned out.  Still working on the moose-quest.

I wonder if there could be a place with friendlier people than Newfoundland?

Just ONE example (besides the guy that offered to get us a moose – he may have been joking,  but maybe not,  too):  We went to a local restaurant in Gander.  I asked about the “Sunday Dinner Special.”  The waitress answered, “It’s like the Jiggs Dinner on Thursday…”  I must have looked puzzled because she immediately said, “Oh,  you are not from here…Jiggs (and Sunday) dinner consist of salt pork (or turkey or ??) and lots of veggies and potatoes all cooked in a pot.”  One of the important ingredients,  I remember she said,  was something called “Figgy duff” which is a pudding of some sort made in a fabric sack…  Anyway,  it is a HUGE meal.

She looked genuinely heartbroken that I would not be able to have Sunday Dinner.  She said,  “Come over to my place next Sunday and I’ll have Jiggs Dinner for you…there’s always plenty when our family sits together.”  And you know what…I am SURE she was sincerely inviting us over…this was not just chatting up the customers,  of that I am certain.

Speaking of Gander…like most people (well,  ok, not most, maybe SOME people), I had heard of Gander, and knew it to be a lonely airport that used to be a fuel stop on transatlantic flites in the early days of aviation.   I did not fully appreciate the true remoteness of the place prior to and during its important place in aviation history.

Gander Airport and Town were literally created in the middle of the bog. There were no roads, though there was a railroad. There was no TOWN before the airport; it was a flat spot opportunistically placed between Ireland and the USA.  It was realized that budding commercial aviation needed a fuel stop, so an airport was literally created out of NOTHING,  which for a time was the largest in the world.  Almost every aircraft used by the US in Europe in WWII went through Gander. Every transatlantic passenger flite before the Boing 707 Jet in the 50s stopped in Gander.

Then,  almost as abruptly as it appeared,  Gander’s importance and all associated industry and economic activity disappeared completely when commercial aircraft got long enough legs to make it across the Atlantic without refueling.

Until 9/11…when the world again discovered Gander.

You may recall that all air traffic in the US was halted for almost 4 days after 9/11.  This caught HUNDREDS of flites in the air…all told to land as soon as possible and wait for instructions.  Gander’s last remaining connection to Aviation is its Air Traffic Control Center that is responsible for a lot of flites over the western Atlantic,  which was squarely in the middle of the chaos.

The “North Atlantic Aviation Museum” has an exhibit that features Air Traffic Control tapes of the 9/11 scenario as it was going on.  Controllers directing flites in Gander airspace to change course:

“US Airspace is Closed.

The disbelieving (but thoroughly professional) pilots responding to the bizarre instructions. Most had never seen Gander and may not have had the right Terminal charts, even.   Time Lapse Radar plots at the museum showed all the aircraft turning towards this little spot in the middle of nowhere and then disappearing as though into a black hole as they  reached the spot (and landed).

There is a Broadway Show about this (“Come From Away”), which we have not seen.

40 commercial and private aircraft landed at Gander.  Almost 7,000 people.  For 4 days, the town nearly doubled in size…there could be no place LESS prepared for such an onslaught since Gander’s days as an aviation hub were 50 years gone.   How were these people to eat? Sleep?  Manage?

The story of what Gander’s residents did to accommodate all those passengers is absolutely remarkable.

They collected linens and blankets from everyone’s closet; food from everyone’s freezer (probably including Moose).  Opened the schools, Curling rink,  every bar and restaurant.   We have personally been graced by Gander…and Newfoundland… hospitality on a small scale, and met people who were here then and remember 9/11 it well.  It is hard to imagine,  but completely true that all the faces smiling at us were smiling just they same way when they took thousands of complete strangers into their town and in many cases homes and made them feel welcome.

The news on a daily basis shows us the bad in people…
it helps to come to a place like this to be reminded of the good.

← Amazing NewfoundLAND!!!! ← Shhhh. Don’t tell anyone. WE SCORED SOME MOOSE!
Next Up

Shhhh. Don’t tell anyone. WE SCORED SOME MOOSE!

We moved on westward from Gander, making it to a place called “Deer Lake,” where there was a very nice…

First, let me say that St. John ROCKS. What a great town, with so much to do and recommend it.…