Several college friends had made the trek to Minnesota: Dick and Tyra Stubbs from Idaho, Craig Banister from Denver, Betsy Kremser from Nearby Osceola, WI. Mark Morris ex-of-Duluth even made a cameo appearance, too, all the way from San Rafael, Ca.

And, a nice surprise for me: Bruce Swanson, who lives in Minneapolis. Bruce and I went to college together (Bruce a year behind me) after going to Grade School, Middle School and High School together.  I have not seen Bruce since 1989 (we think).

On the former, we attended the Minnesota State Fair. AKA the GREAT Fried-Food-Bacon-Coated-Sausage-and-other-Health-Food-Eat-off-endeavor!

Oh, and they have a Craft Beer Pavilion. A PAVILION…with dozens of local Taprooms represented, each with several to choose from.

First and foremost, the Coated-Sausage Contest. It seems (who knew?) there are TWO distinct classes of coated sausage. One, the revered “Corn Dog” and the other the “Pronto Pup.” Inquiring minds wanted to know: which was “BEST?” And where else to determine this but the State Fair, where there are dozens of booths serving each!

We quickly acquired the former, followed closely by the latter. In between a palette cleanser (or several) at the Beer Pavilion.

For my money, the CORN DOG was best…not even close!!

There were many other “Only-Possible-At-The-State-Fair” Moments, including watching the Fair queen (The WORLD-FAMOUS Princess Kay of the Milky Way) have her head memorialized in Butter. 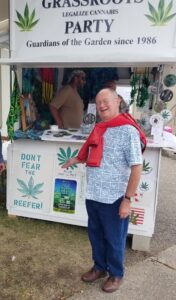 All of that interrupted by a fast-moving weather front at the fair – sirens and cell-phone alerts scattered the crowds and our party was no exception. Liz and I were standing in the “Coliseum” area – a concrete, domed structure where horse competitions take place, so we decided that was the safest place to stay until the storm moved through. College Friends Craig, Tyra, Keith and Bruce were not so lucky.

Or far more lucky, depending on your perspective.

Keith and Bruce SOMEHOW made it about ½ block to a COVERED BEER GARDEN. And Craig and Tyra to a covered patio with comfy cushioned chairs and working firepit displays. We all managed to find each other afterwards, and each of us thought we had found the best overall solution!

Even before the STATE FAIR, several of us drove out to western Minnesota to enjoy the McCleod County Fair. I mean, why not? And Tyra was FROM HUTCHINSON, so there was a bit of “roots-magic” to enjoy if we needed an actual REASON.

As we were driving out there, we passed the town of Winstead, where Liz/Keith remembered nephew Jacob had recently moved. I called him, and suggested he join us at the fair.

We did not at all discuss where or how to meet at the fair, but Jacob being my nephew, and despite that fairly bright, thought the first place to check was the BEER TENT.

Needless to say, we met up almost immediately and very efficiently!

One of the events we chose to enjoy at the McCleod County Fair was the Demolition Derby, where I learned a few things about this activity that I never knew before. I mean it LOOKS like utter, unorganized pandemonium, for which $10 was easily worth it!!!

But NO, there’s more—sooooo much more!!

First, they soak down the track/stadium. Why do they do this? To keep dust down for the spectators? NO!! This serves the dual purpose of making things slippery so no one can get going too fast (and possibly hurt another driver). Secondarily, the wet surface is less likely to encourage FIRE, should fuel leak!!!!

I also learned that the drivers actually AIM where they intend to hit other vehicles. Or, more accurately, they aim where NOT to hit – the Driver‘s Door area (the door itself is often unrecognizable) is off limits as a direct hit there could hurt someone!  More than once, we saw a driver abort a run that might end in this.

Then, a couple times they waved a red flag. Not because of an accident or disabled vehicle – after all, that is THE WHOLE POINT. No, this was because a large enuf piece (bumper, exhaust pipe, fender, etc.) had fallen off one of the vehicles and could possibly penetrate another if driven over – impaling a driver in the process. During a red flag, a bobcat comes out to haul, push or otherwise persuade the debris off the track.

SAFETY FIRST is not a phrase I would normally associate with Demolition Derby!

We all had our favorites at the derby — Liz and I agreed that the 1970’s era Oldsmobile VistaCruiser wagon (we had one of those when I was a kid — maybe even THAT EXACT ONE),  driven by a girl in the 14-year-old division (yes,  that IS too young to actually drive on the street) was the best of all.  She hurtled around the ring, blasting other contestants.  I can neither confirm nor deny she was texting on her phone the whole time.

I bet his mother, Julie, will never speak to “that Uncle” again!!

And speaking of Safety and of my Nephew – I asked him why in the world HE was not out there madly destroying vehicles? He has turned into a bit of an amateur mechanic while becoming a professional welder – it seemed to me this “sport” would be right up his alley. After all, to participate, one finds an old vehicle in a junkyard, welds the loose bits back on and mechanically persuades it to operate for a few minutes (just a few seconds longer than everyone one else is the goal!).

He reminded me (rolling his eyes a bit at his weird old uncle) that he enjoys restoring old cars, not wrecking them. Especially Mazda Miatas, which are far too small and far too valuable for Demolition Derby. But, I could SEE a little gleam in his eyes – I bet he will be enjoying next year’s Demo Derby from the other side of the fence – and I bet his mother, Julie, will never speak to “that Uncle” again!!

In addition to Fairs, we had a plethora of other activities. First, and MOST interesting was a visit to Paisley Park; Prince’s studio and now a museum and retrospective. This was ABSOLUTELY FASCINATING in much the same way as Graceland and Presidential Libraries are. You don’t have to be a FAN to enjoy learning more about what was undoubtedly a cultural phenomenon.

And PP did not disappoint – really gave an in depth view of the complex and talented force that Prince was. I’d HIGHLY recommend this, even if you don’t have the benefit of the “extra” knowledge we had about Prince before we even started the tour…which requires a story…

College friends Dick and Tyra stayed at an AIRBnb not far from Keith’s Condo (where RV Where Yet was ensconced). We discovered that the proprietor was, in fact, a FELLOW CARLETON COLLEGE GRADUATE…what are the chances!!! And because of that, and because she joined us for wine and college-reminiscing one evening, we learned she had become an Attorney focusing on Entertainers. INCLUDING PRINCE!!!

She was one of PRINCE’s Attorneys!!!!!

Now, she did not (would not) break any confidences, but we did learn a little more about the man and his many (and not all well known) quirks, which greatly enhanced the tour or Paisley Park. In the end, she clued us in to the GREATEST Irony of all:    PRINCE HATED ATTORNEYS (hence no will), but his estate is now embroiled in all sorts of legal issues AND the very attorneys he hated are making $MILLIONS sorting things out!

And, one more thing about Paisley Park…When we finished the tour, you exit through the obligatory Gift Shop, which at PP is combined with Prince’s actual Night Club Space, where he held court many nights way past even my younger-bed time. Sitting there in a chair waiting for us… MARK MORRIS!!! He had talked his way in the back door (not sure the security guards knew what to do with someone who wanted access to the gift-shop only) to wait for us. Turns out he had only a little time between family obligations, so he met us there and then we found (surprise!) a taproom nearby.

While in the Twin Cities, the collection of aging College Colleagues attended not one but TWO Minor League Baseball Games. The first was the Triple-A St. Paul Saints vs. the Iowa Cubs.

The SPS are well known for their fan friendly stadium and whacko promotions throughout the game.

For example, there is the “Miracle of Birth” promotion, whereby 2 infant-dolls are dropped down a chute (called the “Birth Canal” by the PA Announcer) from the outfield bleachers. When they emerge (are born), their proud papas (two random and likely inebriated guys) are required to catch them, place them in strollers and run through a slalom course to the finish line.

YOU CANNOT MAKE THIS SH*T UP.

The second minor league Beisbol game was between the ostensibly major-league Minnesota Twins and the Chicago Cubs – two teams vying for epic-baddest of all. It was a gorgeous late-summer evening, with extra wonderfulness of special guests niece-Aleah Salloway and Julie Harris joining us; I do not even remember who won the game, but we all won the day!

The rest of our time in Minnesota was spent enjoying Taprooms, Drinks at Psycho Suzi’s on the Mississippi, dinner at Betty Danger’s (and WITH Betty Danger!) – a Restaurant with a Ferris Wheel. Also Sushi. And even included a BOWLING evening.

As with most feats of an athletic nature, I remember being MUCH better at this (I also remember having far more hair!), but it hardly mattered. 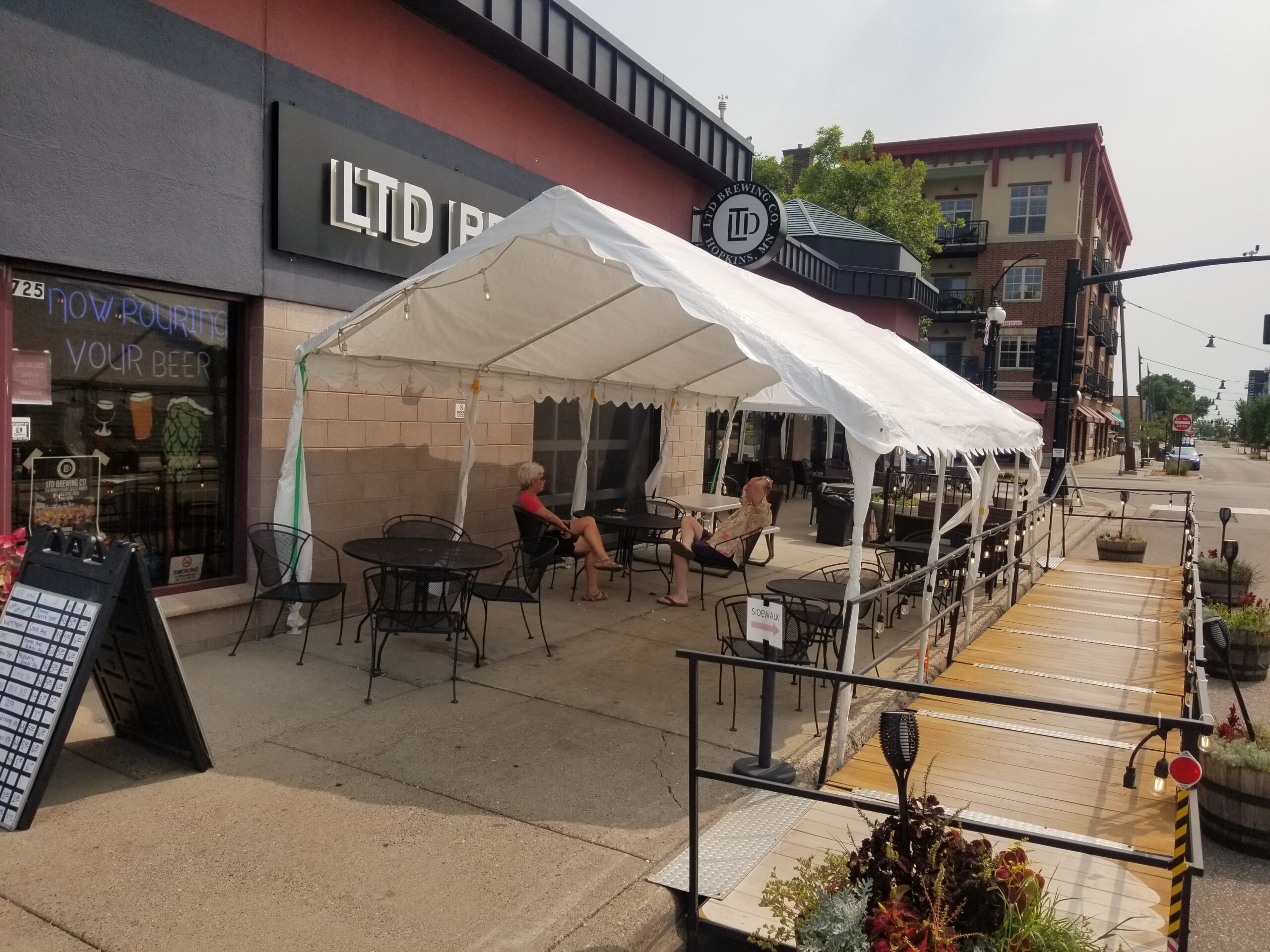 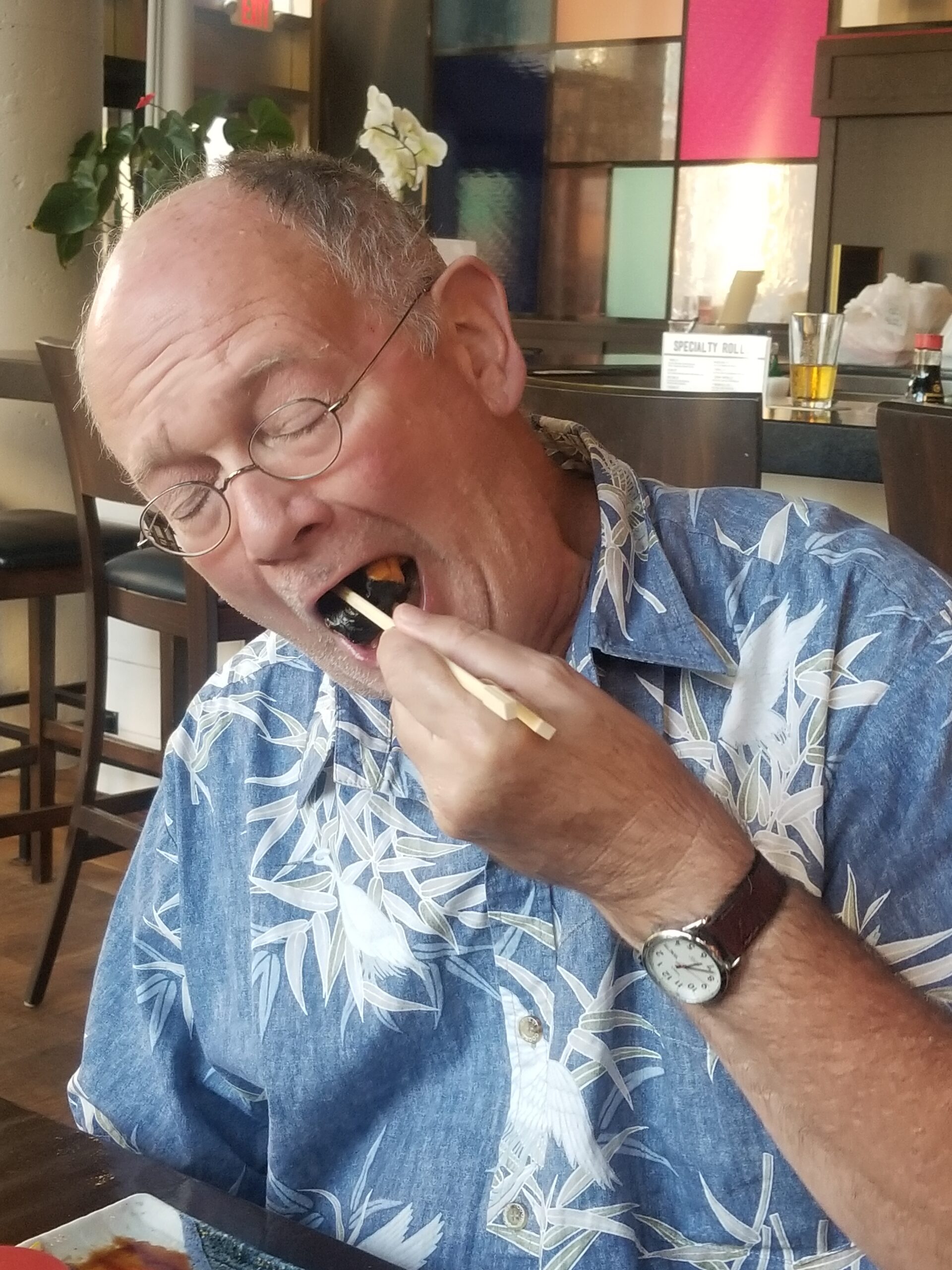 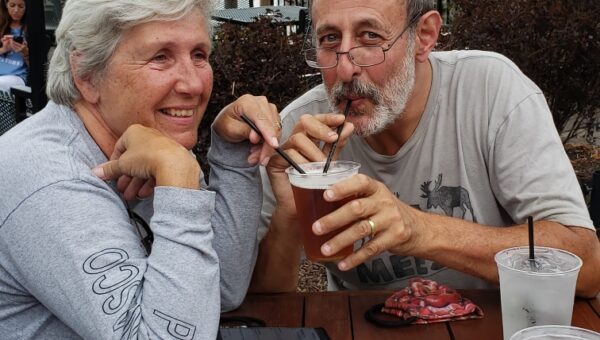 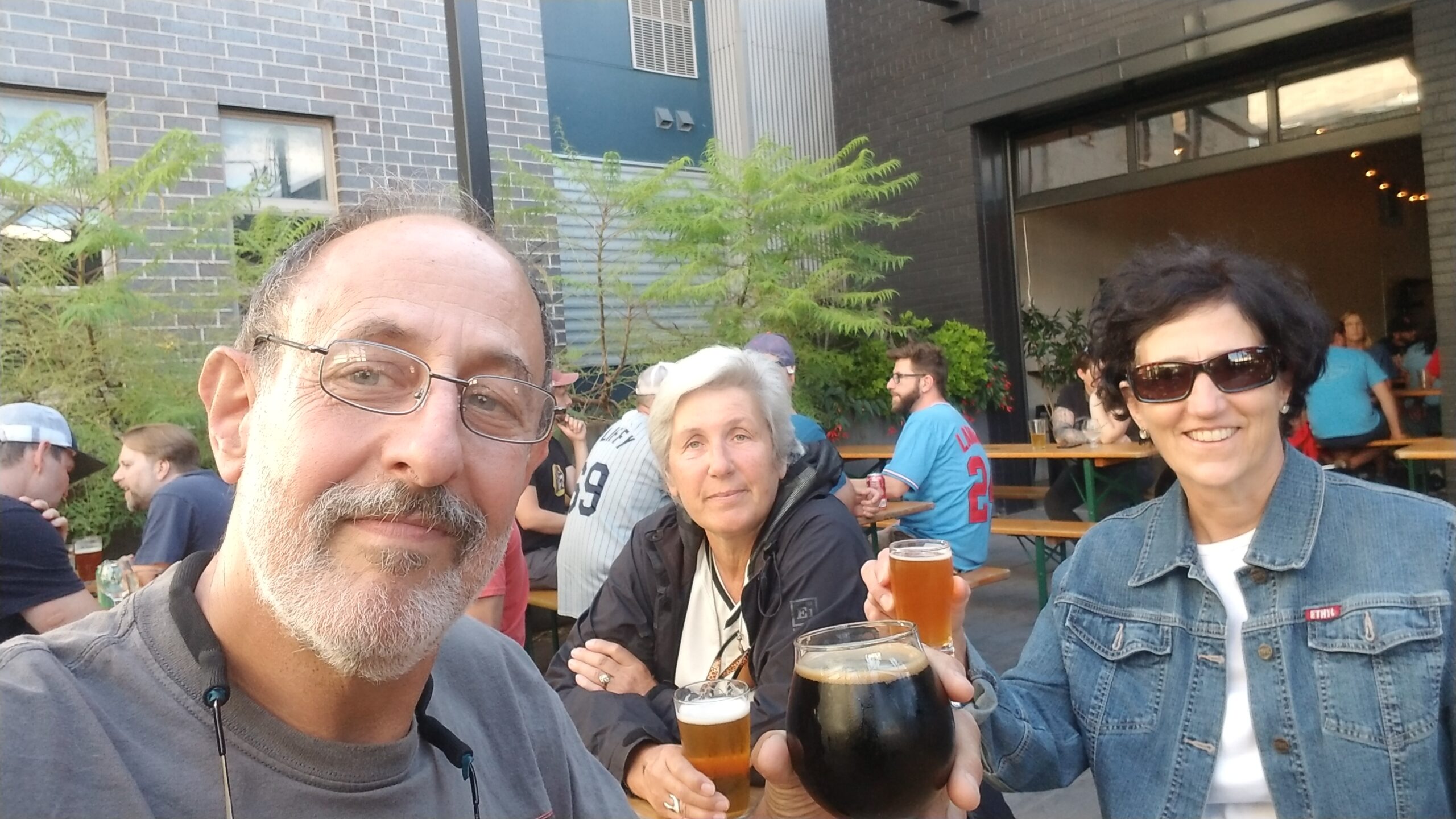 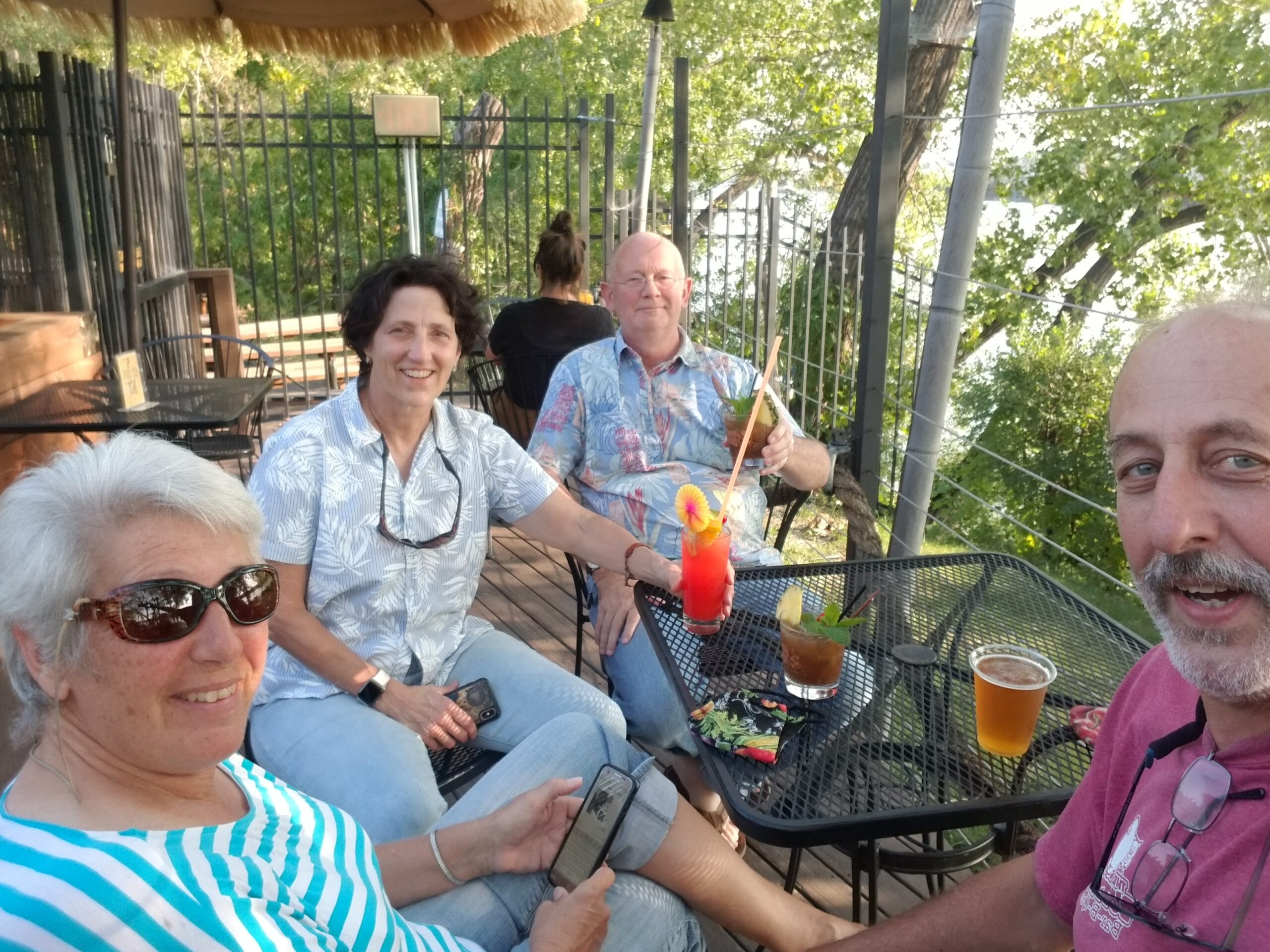 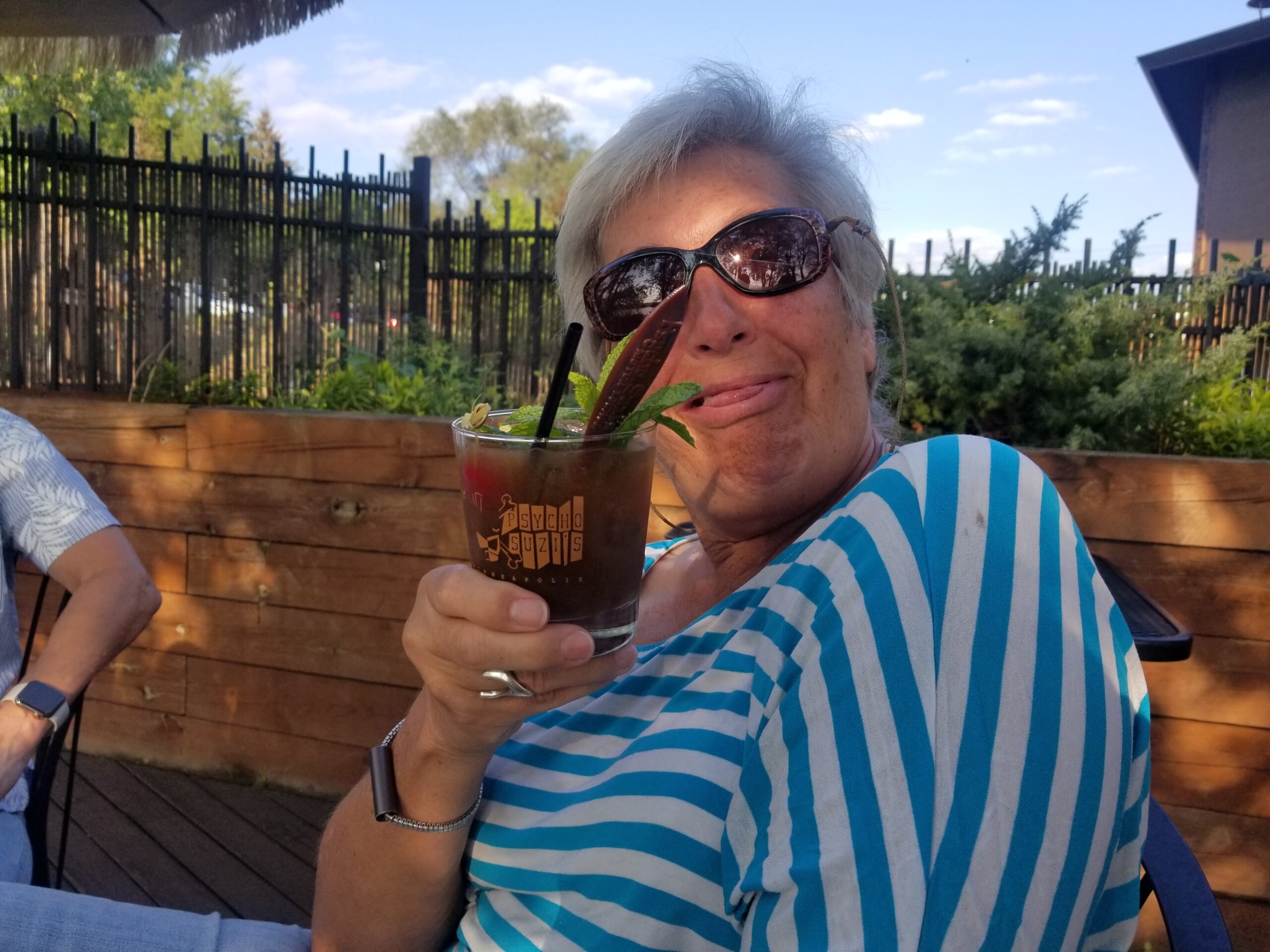 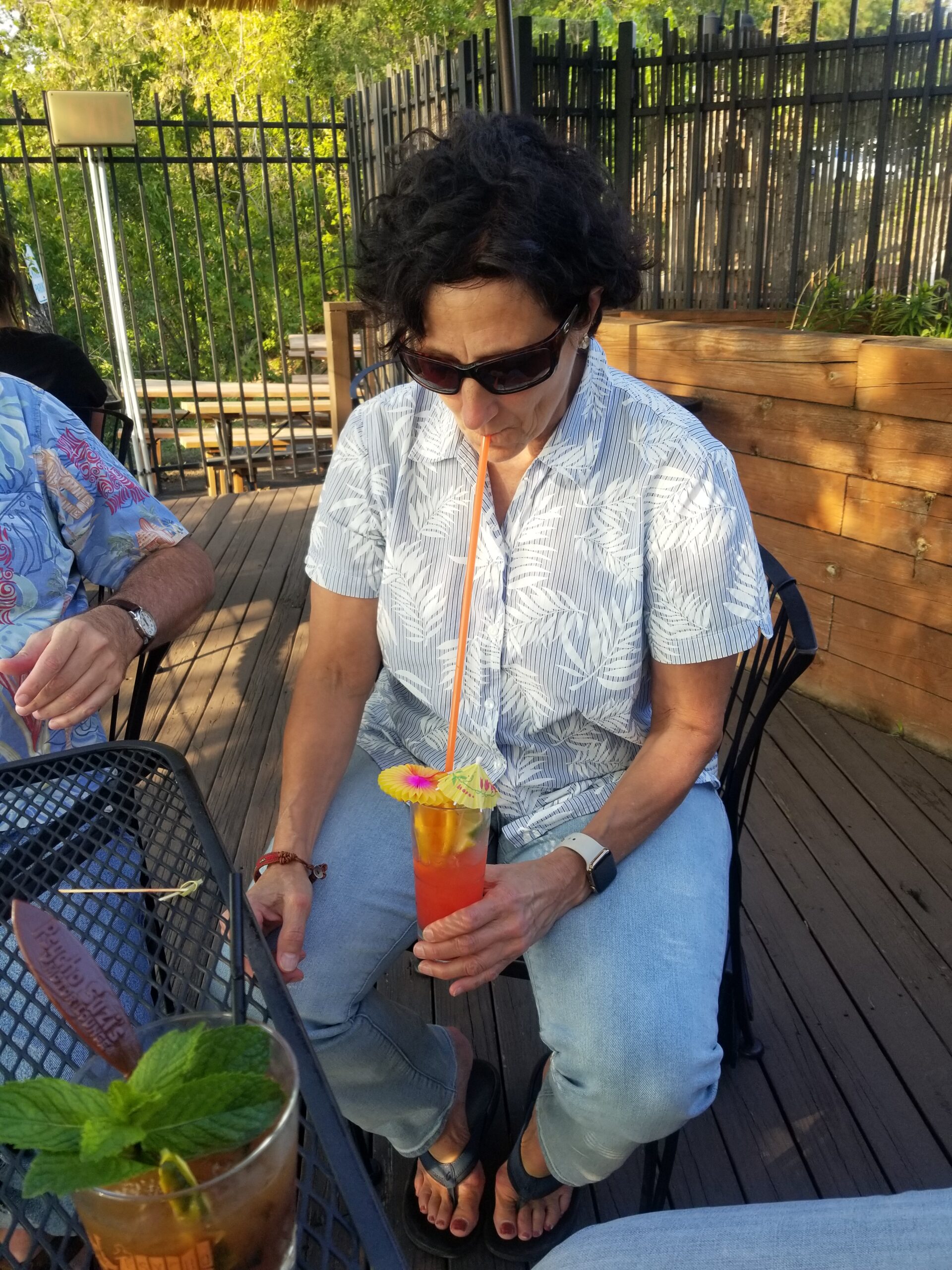 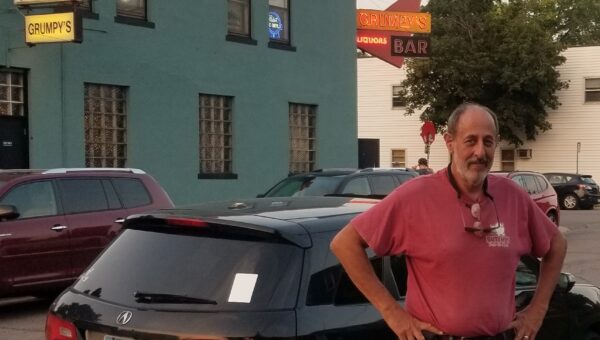 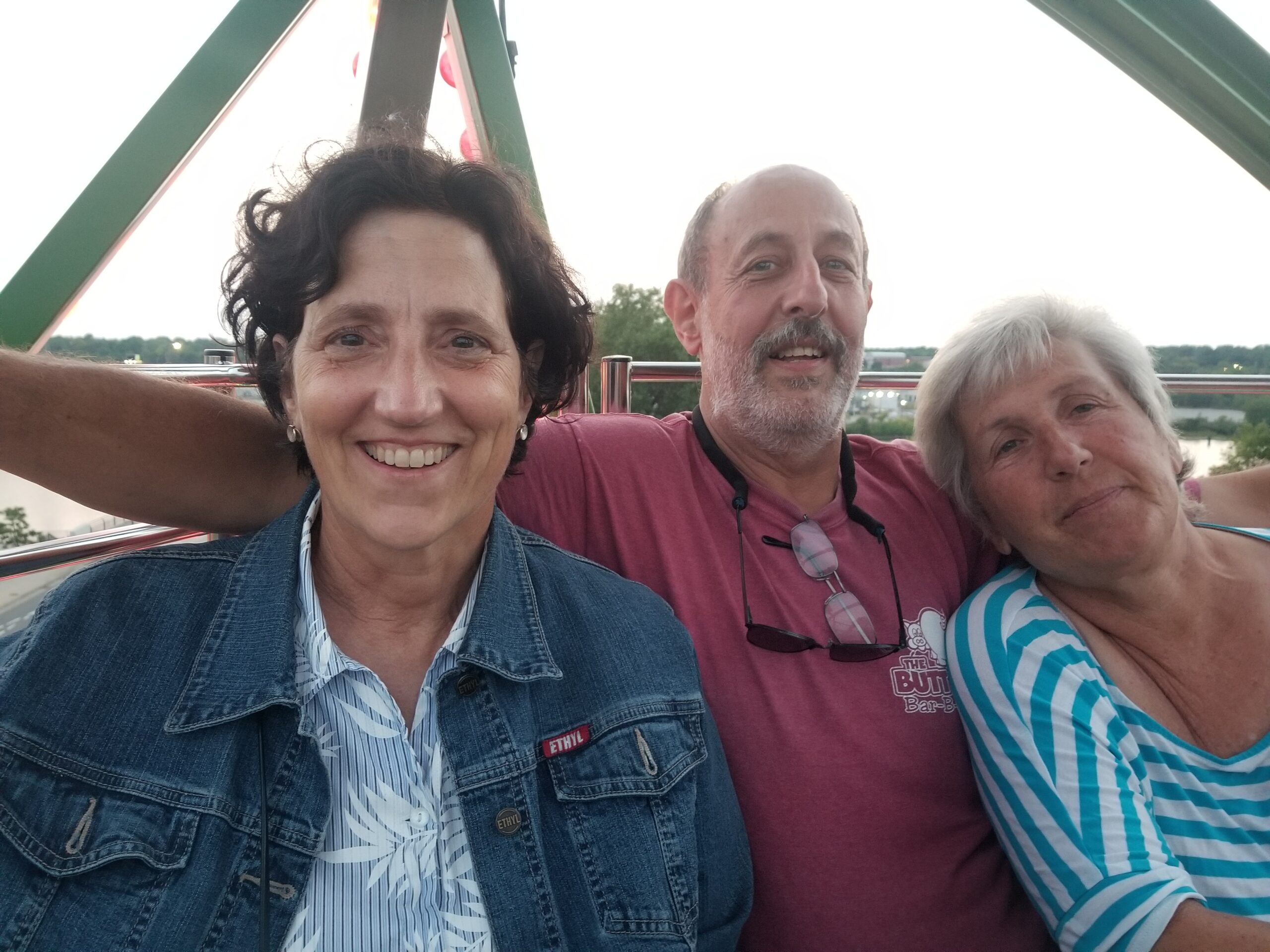 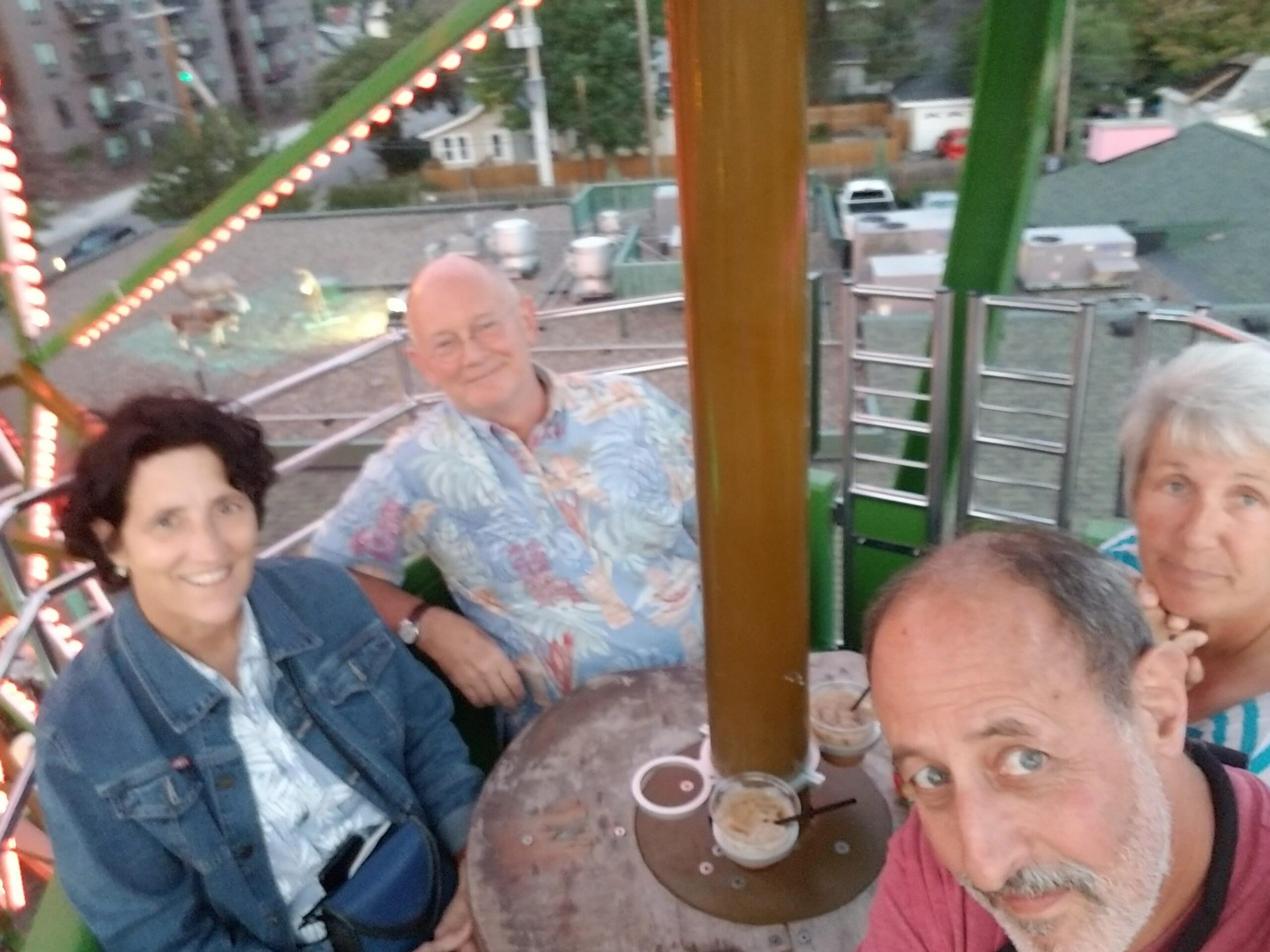 And, finally, we enjoyed a BBQ dinner at the bus with friends from another era – Mary and Scott Mason. Have not seen them for several years, yet we sorta picked up right where we left off!

Oh, and an aside of no small significance:

The Chicago Building Department Signed-off on ALL of the work done on our building!!!

Leaving Minneapolis after Labor day; not unlike the Geese and Hummingbirds, we needed to start our southward migration. But ours included a slight detour – towards Chicago. It seems we have not learned, as of yet, how to differentiate normal superficial and/or semi-internal bumps and spots that seem to proliferate with age from bumps and spots of actual concern. We both had some, so we decided to swing back towards where our health insurance actually works (don’t get me started on our moronic Healthcare System) for a presentation of said marks to our respective specialists.

MORE ABOUT THAT NEXT POST
(just so you don’t worry – all is A-OK).

← Onwards and Upwards… ← Bumps and Spots and Anomalies, Oh My!
Next Up

Bumps and Spots and Anomalies, Oh My!

Our path next took us back to Chicago for the very briefest of visits. Our ONLY reason for visiting was…

We left out West Des Moines en route to Minnesota for a variety of End-of-summer fun and frivolity. We had…