Our route to Canada was planned with a couple of very practical things in mind:

ESPECIALLY The former is WAY MORE expensive in Canada; we’ll have to buy some eventually, but we might as well carry as much as possible. Our friends in Vancouver tell us that many Canadians drive across and fill their car and every can they own with fuel – they even told us a horrible story about a group of Petro-tourists who were killed in a Gerry-can inferno at the border crossing when a car slammed into their rear, redneck-fuel-storage area.

CLEARLY we are going to (eventually) be purchasing diesel in BC; something BC residents go to great pains to avoid.  We hoped to fill as close to the border as possible to postpone this Reverse-Petro-Tourism for as long as possible

I identified a COSTCO in Bellingham with very inexpensive diesel (according to the GASBUDDY app — one of the indispensables we have discovered in our travels).  I looked at Google Satellite view and the station seemed to have big lanes and lots of room for RVs. Ticked one box for us.

I cringe when I hear those words.

Then I found a TRACTOR SUPPLY COMPANY for propane just a few miles from the border near a small crossing (“Aldergrove,” not the “main” – and crowded – one). I even called the Tractor Supply to confirm big Motorhomes could access their fill-station (“No Problem…”). Sounded perfect for us, but of course I cringe when I hear those words. And of course, problems are part of life – especially our life — so on with the story!

On the way to Bellingham, traffic was ATROCIOUS around and thru Seattle. It turns out that the GPS’s we have (Enfingers and Harris) offered different – and ambiguous – routes. We chose the one around Seattle and they chose the one thru Seattle. Both SUCKED.

And at one point, I knew WE HAD A PROBLEM. Radiator fan not running, DANGER, DANGER. We WOULD overheat! Fortunately, I observed this before there was steam… Actually, it is easy to notice the fan NOT running even before the temp starts to climb because  it sounds like a jet engine by my knee when it runs.  And when I noticed I could actually HEAR stuff besides the jet, there was a nice wide shoulder next to us in bumper-to-bumper traffic.

I actually knew what the problem was – there is a fuse on the Radiator Clutch, and for no reason I can discern, it occasionally decides it has had enuf. On the shoulder, I opened the engine compartment, swapped the fuse and all was well.  In fact,  I don’t think the traffic had advanced more than 200 meters while we were on the shoulder!

Even with our unexpected stop, we still beat the Enfingers to Costco by about 15 minutes. This was PERFECT because it allowed us to fuel EVERYTHING (Diesel, Generator and Toad) and then hand my Costco Card to Steve, in line a couple vehicles behind us. Next stop, Tractor Supply.

Upon arrival, I stopped in the smallish parking lot, and decided to walk back where the propane fill station was. Despite the clerk’s ASSURANCE on my earlier phone call that there was plenty of room for an RV, I saw immediately that this was NOT going to happen. This is analogous to what happens when people offer us their driveway for overnight,  then give us “The Look” (Oh,  that is BIG) when we arrive.

There was room by the tank (she was NOT lying), but once full, no drive-thru exit and not nearly enuf room to execute a 360 and get out of the fill area. Fortunately, neither of us needed propane desperately, so we simply moved on. And, we learned later, unlike diesel, Propane is actually NOT much if at all more expensive in Canada!!!

The border crossing at Aldergrove was as uneventful as most have been. There was absolutely no line. The crossing Agents asked a few questions…anything to declare? Firearms? Liquor (for “personal use” she asked? Yes, most definitely!!) ? At one point getting a bit impatient with me…(Liz is convinced I am going to land us in jail one day).  The conversation went like this:

DUH, she did not say but clearly thought.
She said, “I can see that…you are crossing FROM the USA
AND your Plates are Illinois…”

She Said: “Thank you, have a nice time in Canada.”

Liz, who had been holding her breath, sighed.

Steve said he once asked a border agent what they were looking for,  as they opened bays, cabinets and the fridge.  Not so much contraband as “This,” the agent told him.  “This” being all the “stuff” that proves you are actually living in the Bus.  If there wasn’t open milk, toilet paper, cereal and, to be sure,  a few bottles of liquor, they would be VERY suspicious.

We arrived at the Capilano River RV Park, just across the harbor from Vancouver Proper. We have stayed here before – it is a GREAT location very near the city, with bike trails along the shore. THOROUGHLY ENJOYABLE. Made even moreso by the welcoming hospitality and extreme generosity of our many friends and former colleagues in the Vancouver area. Sherry Walton and Jack Christensen hosted a soiree at their magnificent home with a magnificent view over Vancouver’s magnificent harbor, where we enjoyed magnificent hospitality, magnificent food and magnificent camaraderie. 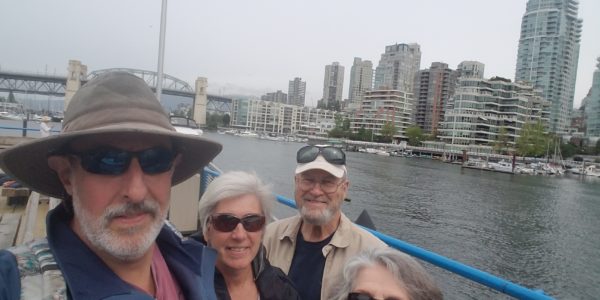 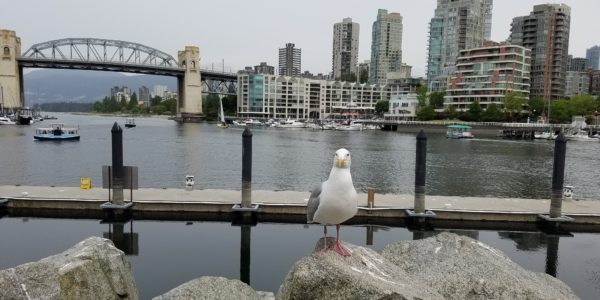 Of course, one of the magnificent menu options at the soirree was Salmon! We are in the part of the world where one can (must?) have this item for every meal, and for snacks in between if you count Salmon Jerky and for dessert if you count Salmon Candy.

Jack had some Wild-caught Salmon, and was preparing to grill it. The guys collected around the grill (as guys do) and it was generally concluded that the last guy that touched the burner controls was responsible for the outcome. I stayed away. The Salmon was MAGNIFICENT without regard to responsibility.

It doesn’t hurt that it also tastes better

Jack and Paul Fournier told us about Wild vs farm-raised Salmon. Apparently, the farms are VERY destructive to the wild habitat and stock. Diseased fish escape, infect and decimate the wild population. This has happened everywhere the farms operate, and is happening in the Vancouver area. As a result, Jack serves ONLY Wild-caught Salmon (to support the industry and NOT the farm-operators), and encouraged us to do so as well. It doesn’t hurt that it also tastes better.

One set of friends – Gera and Chuck Chandler – actually stayed at the RV Park too, in their brand-spanking-new Motorhome! Chuck retires in December this year, and does not quite know what retirement looks like, but Camping is part of it. We enjoyed a meal together – I cooked Tenderloin of Pork and Beef on our new grill, along with roasted sweet potatoes and asparagus AND the last of the Blueberries from the Captain Blueberry-Gibler over Cake.

Liz MIGHT be beginning to see the grill-purchase as not quite fully frivolous!

While in Vancouver, both the Enfingers and I had need of a Notary Public’s services. In our case, to execute an Estate Document for my Mom’s Trust (she passed away recently). In their case, a real estate transaction. My document was actually pretty easy to deal with. I asked Paul Fournier (a friend with whom we were having a Sushi Dinner one night) if he could print the document. I found a Canadian Notary a few blocks from the RV park and she performed the necessary service.

Hmm. I wondered if the Estate should pay for the Sushi – after all this was the ONLY way to get’er done! I know I have mentioned before that Vancouver has THE BEST Sushi in the world (at least that we have experienced). YUM!

The Enfingers’ were not so fortunate.

First of all, they were Sushi Virgins, and after joining us for dinner, stated they would not go after sushi voluntarily again. (But, at least they were game to try.)

In addition, their transaction required EITHER a US Notary OR a certification AFTER notarization by a US Consulate Official (an appointment for which could not be made less than a week out). For what reason this certification is required we could not imagine…surely Canadian Notaries are as upstanding and reliable — and probably more friendly — than American ones?

Steve concluded the best approach was to actually cross back into the USA (about 90 minutes away) to get his document executed.

And this WOULD HAVE BEEN TRUE if not for the traffic (HORRIBLE) and the not-so-routine border crossing they experienced. Maybe the latter was because they crossed twice in a couple hours, AND did not have all the accoutrements  of folks living on the road,  which was their story when asked.  Suspicious, at best. Were they smuggling liquor? Fruit? Or, maybe it was a gun purchase which Steve had made awhile back (the gun was NOT with him but may have turned up in a database search). Whatever the reason, they were pulled out of line and their car (with no liquor and no gun) was thoroughly searched. Eventually, they were allowed back into Canada and returned to the RV park.

During the Walton/Christensen dinner (and there were adult beverages involved), the conversation cycled around to our intended routing as we headed North. It went something like this:

Of course, everyone making these claims said they had last been that way 20 years before… But, they all suggested an alternate routing on HWY 1 – the Trans-Canada and a “main” road. Concerned, I felt the need to do some research, not wanting to end up stuck or in a ditch on the first leg of the first week of the summer.

We have a book called “Milepost” which is a GREAT GUIDE on Alaska Travel. I will talk more about this in future posts. This book implied that this route was FINE, including updated bridges and fully paved (though it did confirm the grades, as well as frequent speed traps in First Nation’s lands). Finally, I spoke to Peter Haggins, a fellow Bluebirdbrain who lives on Vancouver Island.

Peter said that he would NOT hesitate to take Duffy Lake Road in his bus, which is bigger and fancier than ours and even bigger than the Enfingers’. He has done so on his Motorcycle recently (not really a good comparison, of course), but had gone in his old 1978 Bluebird years ago. He said there are indeed grades and switchbacks, but none that we could not handle. And, he said, “It is MUCH MORE SCENIC” than the “main road” routes.

Decision Made: Duffy Lake or bust, which can happen even on a beautiful, smooth, flat Interstate, as our reader(s) already know!!

← The EXACT cost of Stupidity… ← The Little Engine That Could?
Next Up

The Little Engine That Could?

The EXACT cost of Stupidity…

Our Alaska Voyage is now well underway. We made it to Vancouver as “planned” so we could group (can’t “re”group…