We left Chautauqua in the direction of Montreal. The first thing that strikes us…CANADA IS A BIG PLACE. Of course, we knew this, but not the specifics when converted to Optimum-Bus-Driving-Distances. We had two longer-than desired driving days to get to our first stop in Canada. (And, when we later head onwards to Northern Ontario, the distances really become impressive). But, the journey, as always, was not without adventure to break up the driving monotony.

For our first sojourn to a foreign land, we had several crossing points to choose from. Montreal Friend Joe Havas recommended US81 at Thousand Islands, and then the 401 in Canada as very scenic.

Our plans include almost 1,500 miles of driving in Canada, so saving 30% on 235 Gallons of fuel is not trivial!

In the end, filing Joe’s recommendation for future use, we made our decision to use the crossing on I87 directly south of Montreal for a very practical reason: We wanted to top off the bus’ diesel tank in the USA where go-juice is about 30% cheaper. $2.69 in the US to about $3.40 in Canada after converting liters to gallons and CAD$ to US$ at current rates. Realizing that my math skills are suspect, I am hoping this was a logical choice. Our plans include almost 1,500 miles of driving in Canada…entering with a completely full 235-gallon tank (@ approx. 7.5 miles/gallon) will make a difference!

So the crossing-strategy meant driving on US11 that cuts across far northern NY State. There is, to be generous, not much up there. We stopped at a Walmart in MALONE, NY for an overnight. A really nice Walmart with a nice flat parking lot. And, large Cattle feed-lot just upwind. Fortunately, olfactory fatigue set in fairly quickly.

And,  helping with the “atmosphere” was a brief deluge that resulted in the most fantastic rainbow I have ever seen! (click to expand the Pics in the slider…worth viewing full-size!) 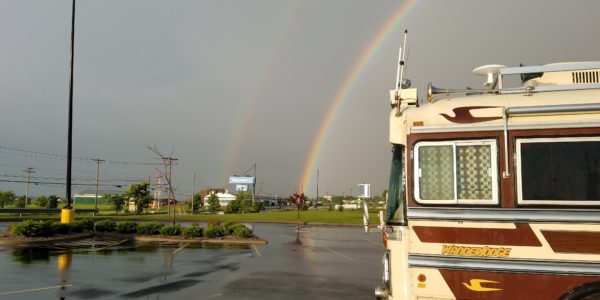 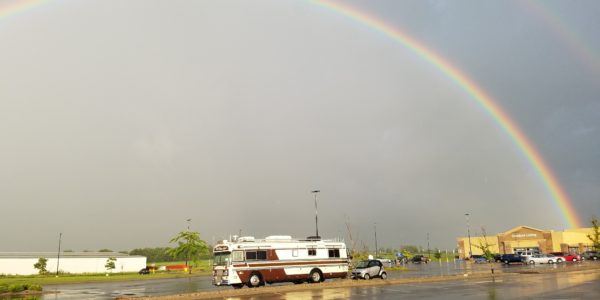 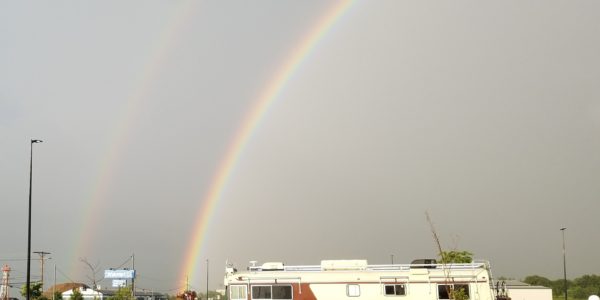 Crossing the border included some advance planning around how much food and liquor is on board (there are per-person limitations…). We (and probably most of you) have had to address personal limits for various things such as liquor, cigars, etc. when entering/leaving countries. Maybe you have even bought some duty-free stuff (like rum when leaving Jamaica?) at the airport. Not such a problem…how much can fit in your suitcase, anyway!?

Now imagine you were taking your WHOLE HOUSE across the border, subject to the same minimums! Things like eggs (strictly forbidden into Canada) and meat (we have some hamburger and chicken in the freezer) even come into play! RVers report variously in online forums. Everything from “They just waved us thru” to “They beat us with rubber hoses until we showed them the hidden Egg stash.” We honestly did not know what to expect.

We did try to prepare our “suitcase” (house), in case our crossing was more like the latter than the former… We had acquired but not finished wine in Chautauqua, and we left that for “safekeeping” with Mike McDowell (we don’t expect to see it again). Along the way we have managed to finish most of our Harvest-Host booty. So what remains is 6 (32 oz) cans of Sprague-Farm-brewed beer, a half bottle of Glenfiddich Single Malt, a half bottle of Tanqueray, a bottle of cooking sherry and a couple other odds and ends.

By my calculation, only slightly OVER the published limits. In conversation with abovementioned friend Joe, he assured us, “I know of someone who lives in the same postal code as us, who have perhaps exceeded the allowed limit at one time or another.”

I hope he is right, because the Farm-Brew was intended to be shared with him!

3 thoughts on “Onwards and Northwards to Montreal”

I know you have been on the edge of your seat…

...Waiting to hear about our border crossing. Were there rubber hoses? What happened to the Farm-brew…and what about the SINGLE…