The Chautauqua Institution was a VERY interesting experience and place. The Institution itself was initially created as a place to teach Sunday School teachers, so its origins are faith-based, for sure. But, layered onto that are its conscious mutation into a place for intellectual growth on many levels. The National Geographic-themed week we attended was a good example. Really interesting lectures on Paleontology, Microbiology, Whale and African Wildlife conservation and the “Tech” of research from world-famous scientists and explorers. (Gotta have me one of those drones…). But also, conversations by clergy-activists on the state of Race Relations today and a session by E.J. Dionne on the “Politics of Remedy.”

And, POPS concert on July 4 by the Chautauqua Symphony Orchestra followed by traditional fireworks and something not as traditional to our experience: Folks all around the huge Lake Chautauqua (it is 18 miles long) light flares and put them on the shoreline. I am sure this tradition could be seen from space!

Liz had another kind of reaction to the Chautauqua institution; she felt distracted and less-than-idyllic. Here is a fairytale-beautiful place where there is nothing to do but improve oneself emotionally, spiritually and intellectually. Yet, it is EXPENSIVE to get in. Very. And has a COMPLETE LACK of diversity, once inside.

The fantasy nature of the place was clearly evident in the race relations talk, where activist speaker (and Black Clergy) Barbara Williams-Skinner looked out on the completely white audience to tell us about the insidious nature of White Privilege in America today.

She was asked about this. And there was discussion about how, for years Chautauqua has tried to “achieve” diversity. I cannot say what they have tried, but it is clear they have failed. Indeed, the CI felt in that talk like a clear example of what White Privilege looks like. Liz had a hard time separating this from the intellectual offerings…feeling the whole experience to be somewhat disingenuous. I guess I cannot disagree.

I am not sure Liz’s underlying discomfort would keep us away from a future visit. She admits that the content was very interesting and worthwhile. One thing it made me think: How can we get ourselves “engaged” in social change – A change to something more respectful and open-minded is something that is much needed no matter one’s politics? Since we aren’t based anywhere in particular, it cannot be at the grassroots level. You can’t have “Change” discussions with people in an area where you spend a week. We’d look like ”White-Privileged do-gooders” who “hit -and-run” with positive ideas and aren’t there to help with difficult implementation. Or consultants, which I was for 30 years. We had some long conversations about that with our friends, the McDowells, with whom we attended the Chautauqua programs. 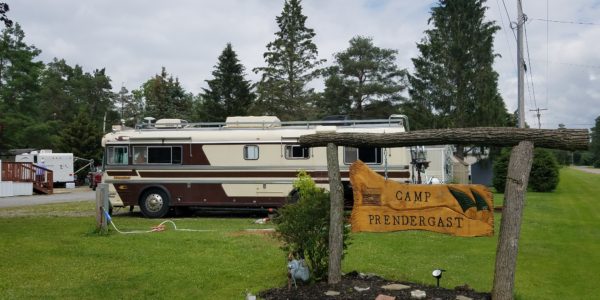 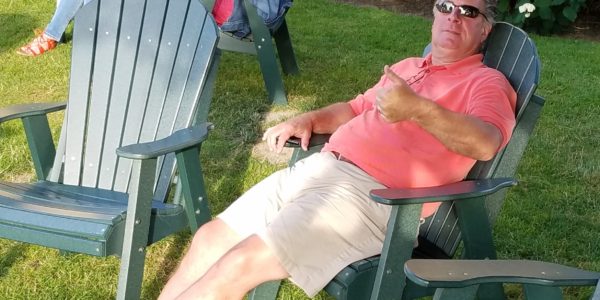 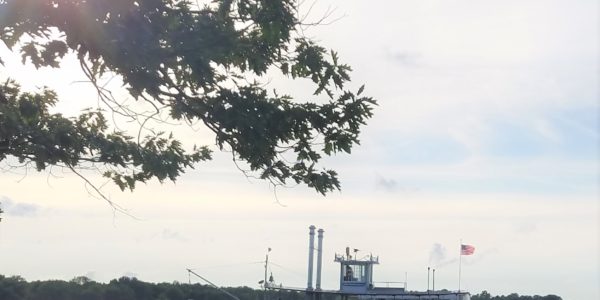 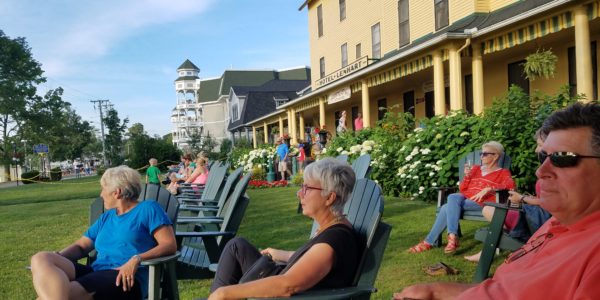 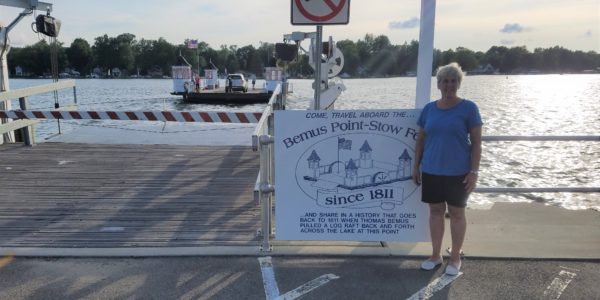 Speaking of the McDowells, the REST of our visit was unambiguously great! We were based in an RV place that was mostly “permanent” residents – they have only two transient spots. The rest are summer folks who have rented their lots for years and have pretty permanent trailers. So, a trailer park! But, this park had nice people, a nice pool and was a 15 minute bike ride from the Chautauqua institute. We got into a very nice routine with the McDowells. Ride to the institute in the AM. Then Progressive dinners in the evening (often preceded by a dip in the pool). Nightcaps with adult beverages may have been involved.

While on the subject of ”Trailer Parks” (and people), which have such negative connotations for many (Dad, are you listening?)…One day someone arrived at their family’s trailer for a couple-day visit. In his Helicopter.

1 thought on “The Chautauqua Institution”

← (Non-snob) Wine Country ← Onwards and Northwards to Montreal
Next Up

Onwards and Northwards to Montreal

We left Chautauqua in the direction of Montreal. The first thing that strikes us…CANADA IS A BIG PLACE. Of course,…