Leaving Cape Cod for point south and our next rally turned into quite an adventure. Our next Rally was at Williamsburg, VA…a destination WAY TOO FAR to reach from Cape Cod without at least 2 stops. So, first, we planned to stop in first in New Jersey to visit Liz’s sister. We perused the map for a Walmart that was near our route and near their house, and we found one in AIrmont, NY.

To say we had an “itch” would be a MAJOR understatement!

Arriving late afternoon, Liz had a special request for dinner: “Mexican, Please…with Molé Sauce!!!” We have been without Mexican Opportunities for the whole summer. LOTS of Lobster, but not a tortilla to speak of in Quebec, New Brunswick, Nova Scotia, Newfoundland, Maine, New Hampshire or Vermont. Probably could have had Mexican on Cape Cod, but it seemed inappropriate, somehow, unless it contained Lobster! So to say we had an “itch” would be a MAJOR understatement!

Anne and Sal had a place in mind, and they swooped us up and took us South of the Border. The place was classic Mexican, which is to say PERFECT to meet the need. Liz had a Chicken and a Cheese Enchilada, with the requisite Molé. This was made EVEN BETTER by the largish Margarita! My enchiladas were also excellent accompanied by Negro Modelo. Should hold us until we get south, where there are more options available!

After a quiet night at the NJ Walmart, we fired up RV WHERE YET and pulled out, headed for Williamsburg. It was at this point that our rally-hopping came off the rails a bit.

The Bus stalled in the left turn lane leading to the I287 on-ramp. GOOD that we were not ON THE HIGHWAY yet. Also good that it was Sunday Morning, so only a few NJ residents honked angrily at us…like we had a choice where we broke down! We put out some cones, and the honking was reduced, but never completely stopped.

We are so used to Canadians; its weird for people to be mad at all, much less at us, and for this!

Anyway, we called our roadside assistance service, and they sent out a HUGE WRECKER, which is necessary for towing our rig. The driver was EXCELLENT, though he wanted to hook us up wrong. I had studied the online forum about this while we waited for the tow, because I knew from talking to people at rallies that an incorrect tow can cause a LOT of damage. Last time we broke down we were lucky that the tow guy knew what to do. This time, I knew what to do; And the driver WAS willing to let me suggest the right way.

The driver asked “where to” and I suggested that he could put us back in the Walmart lot we had just departed – it was less than ¼ mile away! There was NO CHANCE of getting a repair on Sunday, so we’d stay there until the next morning and then figure out where to be towed to if a mechanic could not come out and fix the issue. This was easy, and accomplished without incident.

Since we were stuck for at least overnight, I activated the Forum resources we use to solve tech issues. Basically, I posted a description of the problem. Within ½ hour I had a BUNCH of suggestions, all of which related to fuel starvation, which was also my suspiscion. I also heard back from the Forum’s acknowledged wizard on our engine. Mike contacted me directly, told me exactly what the problem was based on the symptoms, and how to resolve this problem. Which turned out to be as simple as turning some nuts on the fuel injectors to allow some air bubbles to escape. Followed by re-seating some parts that were allowing air into the fuel lines.

About 2 hours of research online, a half dozen emails and 30 minutes of wrenching and the engine FIRED RIGHT UP and CONTINUED TO RUN. A FIRST! Not the first time I have fixed something. But for sure the first time a repair has cost less than 3 digits!!! The actual total would have been $0 had I not tipped the tow truck driver!!!

It was now too late to leave for Williamsburg, but we had satellite TV and football and Walmart to provide dinner. ALL GOOD!

The next day we decided to just GO FOR IT. That means combining what we had intended to be 2 days of driving into one LONG day. Not something we do without careful consideration, which in this case consisted of examining the rally schedule. If we MOVED, we could be there before Cocktails (and heavy hors dourves). RV WHERE YET surged forward. Well, maybe wandered. Crept. Smoked. But our (again) trusty steed did not let us down…we arrived at 5:45 and the formal Rally Cocktail event began at 6:00!

At Williamsburg,  we had more Rally-fun (over and above cocktails and pot-luck).  This time we had some quality historical time, visiting Colonial Williamsburg, Yorktown and Jamestown.  The latter was my favorite — an archaeological site vs. a reproduction, recreation and re-enactment.  But for my money,  the BEST PART of this rally was a behind-the-scenes tour of the NASA Langley Research Center.  We had been alerted to the possibility of this really special tour.  In fact,  we had to send information ahead of time, so that background checks could be run.  Apparently,  we passed,  because a badge was issued to all of us,  including me!

Once inside, we were shuttled to a variety of buildings, where directors, engineers and other REAL NASA FOLKS told us (quite passionately,  I might add) about their building, machines, projects, etc.  The latest thing is the ORION capsule and attendant engineering.  Our host had just sent off the piece developed by his team…the LAS which was just sent out for AA2 — everything at NASA has an acronym.  “LAS” stands for “Launch Abort System” and “AA2” means “Ascent Abort 2.”  What THAT all means is that the future astronauts can be yanked off the top of the rocket during ascent if things go bad.

Other parts of the tour focused on machines and test beds for breaking stuff.  Big Machines.  For catastrophically testing the destruction of big things like aircraft…entire aircraft!  Dropped on their nose from 200 feet.  Or wings flexed to the breaking point while bathed in transonic air cooled by liquid nitrogen; all the while collecting data.  This is REAL GUY STUFF.  Getting paid to break things…HOW COOL IS THAT? 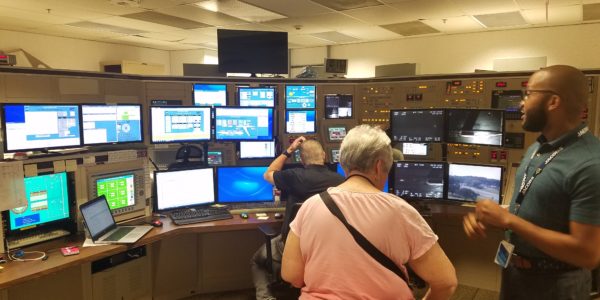 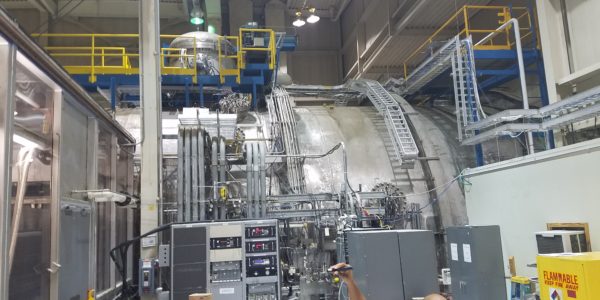 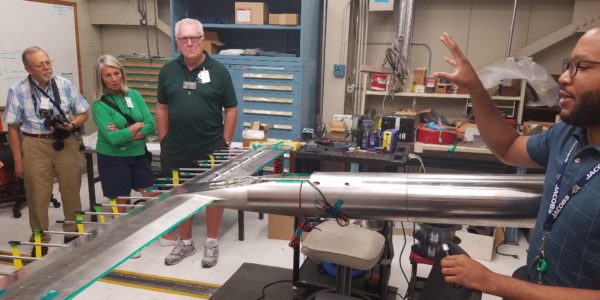 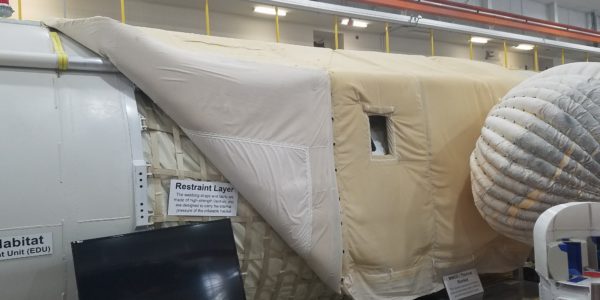 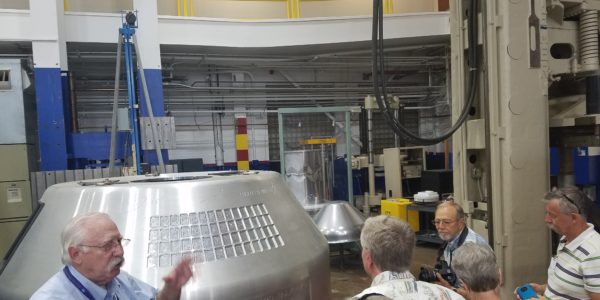 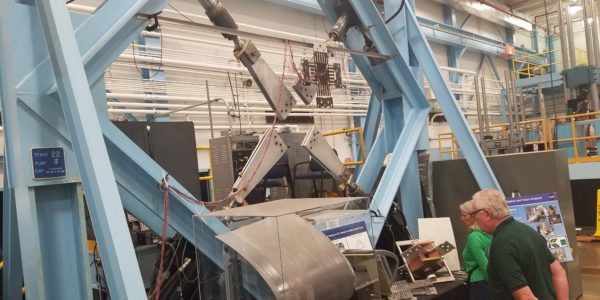 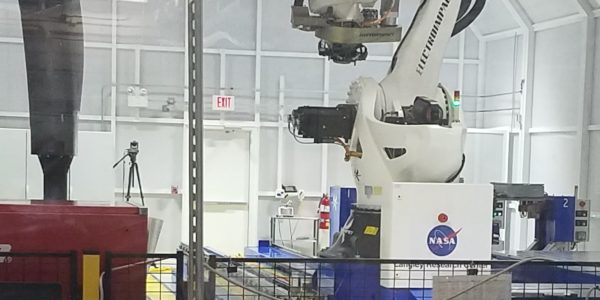 I left NASA fully sated,  but a little sad.  Langley is being disassembled,  building-by-building just as the space program is.  I can’t help but wonder which inventions won’t be invented because we were too short-sighted to fund places like this.

Before leaving Williamsburg for our NEXT rally (this one in the Smokey Mountains of Tennessee), we took a couple days for a special visit to Washington DC.  There, my Aunt Marilee and her daughter Joan awaited our arrival — and an opportunity to solve all of the pressing problems the world faces.  This included our embarrassing health insurance system, the politics of immigration, Social Security bankruptcy and the partisan sham that is our government these days.

And,  not the least problem to be solved:  Why her printer won’t print!

You see,  Marilee is still a working artist,  and that printer is needed to produce her masterpieces!

As it turns out,  technology cowers before me.  Some say all they have to do is THINK ABOUT calling me and recalcitrant computers begin to behave.  I don’t know if that is true,  but I do know that her printer worked immediately as soon as I entered the room.

We were a few weeks early for her 106th birthday — sorry to miss that party!

4 thoughts on “Not the BEST way to start the day…”

Our next rally commenced in Sevierville,TN, long since “advanced” from the days when Dolly Parton grew up in the Holler…

Our busy (?) rally schedule has started. The first one was on Cape Cod, where there was a gathering of…