We drove north for awhile. Quite a while, actually. Seemed like the North Pole might be just beyond the next rise. Never mind that the GPS said our maximum northern progression was 48.94935 Degrees north latitude…which is NOT EVEN NORTH OF THE CANADIAN BORDER for most of its length. Still, it took us 2 days of driving to make it to the cottage where our friends the Aidelbaums “eagerly” awaited. Perhaps we were more eager than they, but anyway.

Because of the distance, if not the latitude, the first night we stopped in Mattawa, Ontario. We had been recommended to have dinner at “Myrts,” a Mattawa local hangout. Our initial thought was to just stay there in Myrts’ lot and have breakfast, too!

Instead, we discovered a great little campground just down the hill from Myrts, on the shore of the Mattawa River.

Very perfect. And, because we are after the FULL MONTY Canadian experience, breakfast was at the Tim Hortons next to Myrts.

The next day we finished our journey, arriving at Silver Tire Road.  Really, the road sign is a Silver Tire…you cannot make these things up.  More amazing is that the GPS knew about this and took us directly there.

Anyway, Steve Aidelbaum met us under the tire on an ATV to guide the Millenium Falcon (that is what Steve calls the bus) down the road to the cottage.

Steve explained the new name thusly: “ A cool old ride that is clearly more than meets the eye.” Personally, I believe actually he was thinking,  “An old bucket with an irascible codger at the controls.“ Pretty sure Liz is the Princess in Steve’s imagination, not the Wookie.

Anyway, Steve showed us several possible places for the Falcon to dock at Cottage. “Cottage” in Canadian is a noun, verb, adjective, government entity and sometimes a pronoun. Who knows, maybe an adverb, too. For example, one “cottages” in the summer, in Cottage Country while staying in one’s Cottage. One pays dues to the Cottage (Road Commission) to maintain the cottage-access roads.

I walked the path to each of the offered locations, looking for muskeg into which the bus could sink,  trees that could take off our new Amish-Air Conditioner, etc.  We decided to select for the Falcon the closest cottage-dock of the three offered and the MF (which might mean “Millenium Falcon”)  came directly down the Aidelbaum Cottage’s drive.

Before the docking maneuver that would follow transit of the drive, I recommended Steve move his car. We also discussed moving the cottage, just to be on the safe side. But there were obvious problems with this. The Falcon executed a three point turn in only about 7 points (which I attribute to the current exchange rate) and parked in the only manner that could be level. Really, the maneuver did not take long and was quite pleasantly successful. Maybe my expertise was brought out by the promise of COLD BEER once docked.

Once the MF was docked, we staked out a proper position on the cottage deck (and dock) for proper cottaging. There may have been a cold cottage beverage aiding the mood. Some of those partaken were the remaining Farm Brews that the RCMP allowed to remain in the bus.

Then we spent a couple days really focusing on our cottaging. We were whirling dervishes of activity. ATV riding on the Transcanada Pipeline. Boat rides around the lake. Paddle-boating. Eating. Drinking. Swimming. Repeating all of the above. One night there was a dinner party including the neighbor, who is still cottage-building and Steve’s charming dad, Abe, who cottages next door.

There was even a tour (possibly the highlight of the whole trip!) of the Cottage’s NEW SEPTIC SYSTEM.  The Roman Aqueducts have nothing on Northern Ontario Technology.  We have been there, too…we know! 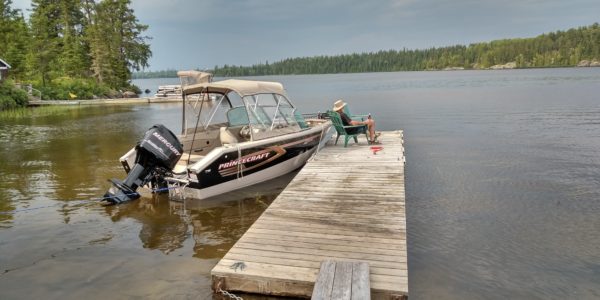 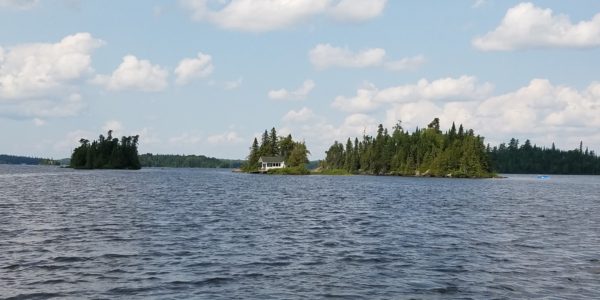 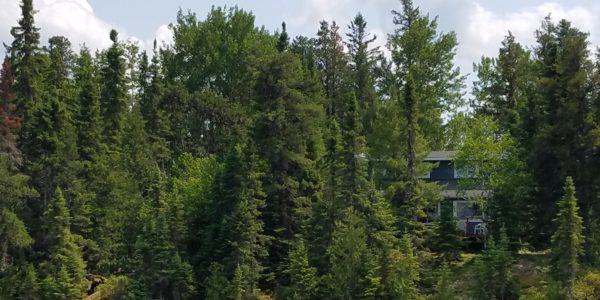 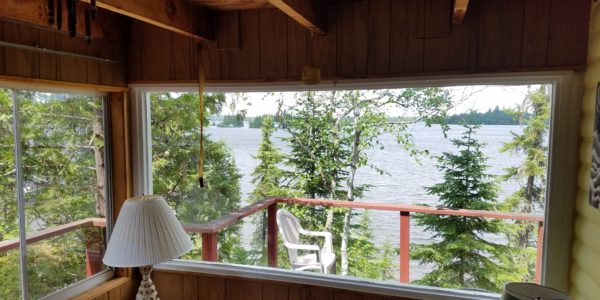 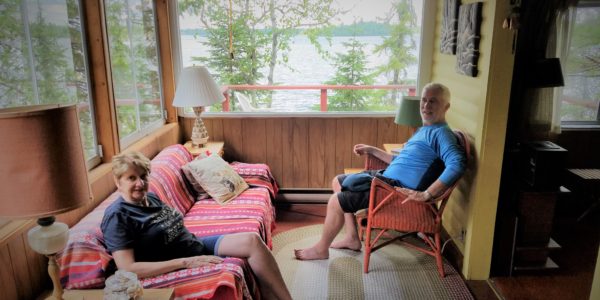 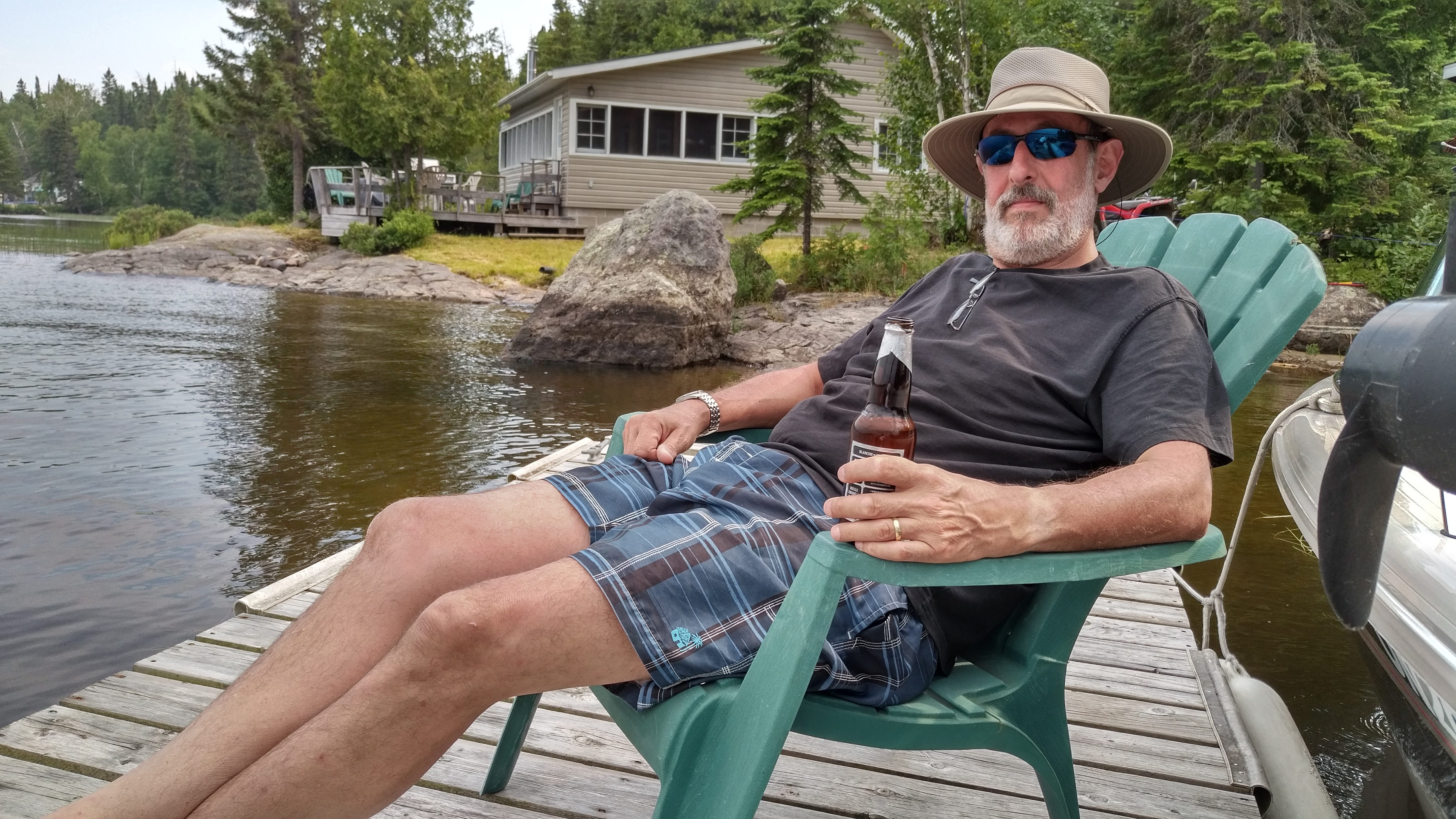 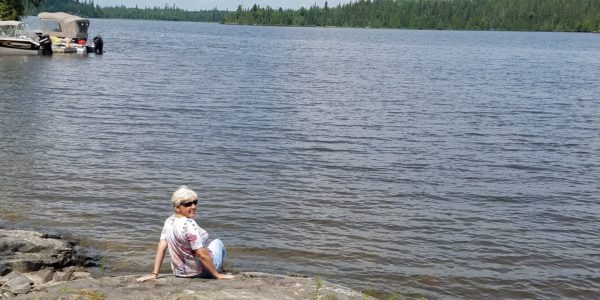 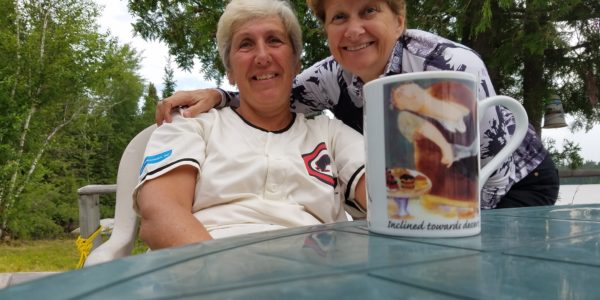 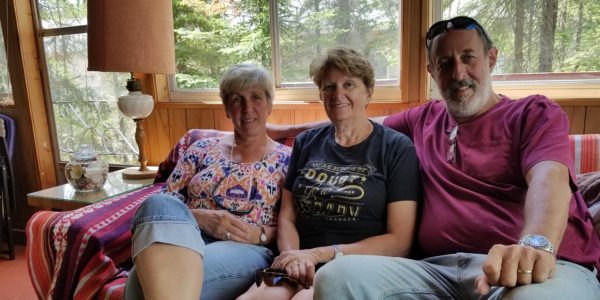 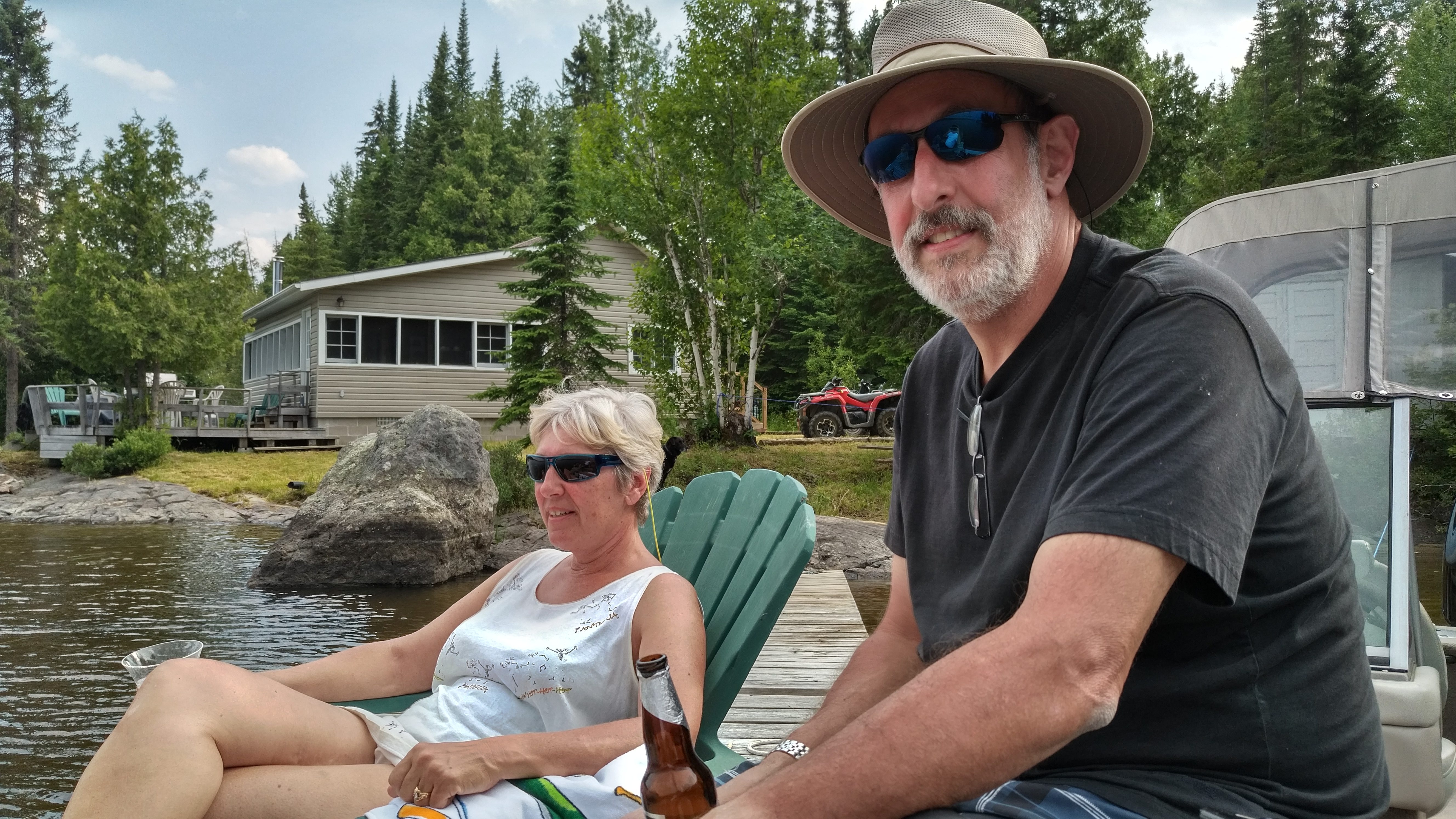 One little hiccup in the cottage routine, which I am SURE Steve and Tanis planned explicitly to make us feel at home (being the CONSUMATE Hosts). Day 2…the Hot water heater no longer made water hot. There are some alternate theories as to WHY. Possibly anything the bus is attached to inherits its legendary reliability? Perhaps the hosts were tiring of the guests and this was a “nice” Canadian way of making us feel less welcome?? (Our hosts deny the latter. Perhaps a little too vehemently?)

I am NOT going to say that the secondary meaning of “cottaging” (It’s there in the Canadian Heritage Dictionary, if there are American Guests) is:

“Drinking the guest’s beer while they fix the appliances.”

Even if that is sort of what happened…

But NOT TO WORRY. With months of experience in the Millenium Falcon, the Captain and the Wookie (or possibly the Princess) simply FIXED the HW Heater. I guess a cottage IS merely an extension of the docked Falcon.  This should be construed as a fair warning to future hosts — but, really,  is this necessary if we (usually) fix what we break!

We were getting pretty comfortable in the cottage-rhythm. Despite this, and resisting with great effort Steve and Tanis’ hostfulness and graciousness, we still thought to honor Ben Franklin’s advice about Guests and fish smelling after 3 days.

Good thing we fixed the HW heater or we would have smelled after day 2!

So, on the third day, we broke cottage (wait, technically we FIXED cottage, but anyway…) and headed south. Towards Toronto where we have dinner tee’d up with several friends.

Again it took us 2 days to travel the distance from WAY NORTH 48.94935 latitude.  On the way we stopped at a Walmart in North Bay, Ontario and in the lot were more RVs than many of the RV parks we have stayed at. And, a great local restaurant. And a DQ.

While parked there, we wondered, taking into account Ben’s advice, would a new three day-meter start if we headed back to Cottage instead of continuing south?

← Back to the Future… ← Trono (AKA Nirvana)
Next Up

[caption id="attachment_2770" align="alignright" width="300"] There actually IS a Hindu Temple near the Campground, so maybe this IS Nirvana?![/caption] A couple…

Back to the Future...