Well, we arrived in, and escaped from Las Vegas successfully. But as with all of our adventures, not without drama.

Our first step upon arrival was to be delivered to the bus from the airport by our friend, Krystal. She works as a security guard at the RV Park, and moonlights as a driver for park residents.

In her latter capacity, she met our flite and took us straght-away to the park.

She felt this was best done under cover of darkness…

In her former capacity, she STRONGLY recommended that we try to start the vehicles on Saturday eve, in the dark. I asked if maybe we shouldn’t wait until the next day…did not want to wake anyone up (it was 9:30, and most people in Nevada RV parks are well-past retired…). However, based on my statement that the Bus’s old diesel was likely to smoke A LOT when first started after 3+ months idle, she felt this was best done under cover of darkness!

The bus started up immediately, and made VERY LITTLE smoke. At least none I could see in the dark. We idled for awhile to make sure it would air up (it did) and by doing so, encouraged someone to complain about the noise. This forced the working-security guard to come by. He was sympathetic, not mad (almost apologetic) but since I had learned what I needed to learn (everything was good), I shut the bus off so he could claim he had restored the peace (without gunfire).

The Clown Car, on the other hand, would not start…dead battery!  Krystal went and got jumper cables and it took longer to find the battery in the Clown Car than it took to get the car started. The battery (a tiny thing) was located under the passenger’s feet. The carpet needed to be removed to expose a hatch in the floor. The battery was under that. Once connected, the CC started.

With our mobility assured, Krystal bid us adieu and we drove to a nearby Hotel/Casino for the night. The RV park was adamant…we could NOT stay in the bus, which is in a “Storage” spot. Now, that spot is right next to two resident spots, and our “storage” spot had power, water and sewer. The park was OK with us connecting, cleaning, operating, but NOT SLEEPING in the storage spot. No explanation as to why.

SO I found the “Longhorn Casino,” less than a mile away (which is CLOSE by LV standards). Reasonable reviews online, and pretty inexpensive. This was a DECIDEDLY third-rate, off-strip, threadbare casino.

Liz reminded me that this was my birthday…and it was in fact THE BIG 6-oh!!! Far from celebrating with a WILD TIME in Las Vegas, she felt really “bad” about treating me to a night in this particular hotel and casino. But, I reminded her how we both HATE Las Vegas…even the “Nice” parts. Many folks we have spent time with in our travels have a very favorable impression or vision of this place – glamor and glitz and shows and fun! Some have even been there and STILL have such an impression. We see things differently.

We see people smoking and playing the same slot machine for hours. Sometimes in their pyjamas at 6:00 AM. Every day for several in a row. These folks are often obese at least, if not morbidly-so, feature a lot of bad tattoos and decidedly poor dental work. And did I mention SMOKING? Everywhere. All the time. There were plenty of folks sucking supplemental oxygen…none (at least none that I saw with my own eyes but it would not have surprised me) also smoking. And, clearly, the #MeToo movement has not found its way to the strip, where casino waitresses all seem to have a certain body type, but not in a classy way. And that is in the “nice” casinos and hotels!

Since we could not avoid LV, we booked the Longhorn Casino, with a clean, no-smoking room on a no-smoking floor. It was quiet. And there was a great breakfast place. All we needed while we spent a couple days preparing the bus to move; we never went into the casino proper, which we have been told is actually somewhat dangerous.

After a couple days of cleaning, flushing, filling and generally going over all the “house” systems, we got the bus relocated to the mechanic, Dan, with whom we had last November pre-arranged a thorough going over and a bit of work on the “Truck” part below the floor. He had a garage space prepared for us. He said he’d have us out by the end of the day (!?).

I went over the list with him, and we agreed that we needed to find a place for at LEAST a night – just in case the repairs would extend into the next day (in my mind, I still felt like this was a 3-day list).

PROBLEM: All the third-rate, off-strip hotels and casinos in North Las Vegas, near the mechanic, were FULL!? Except a couple where Dan said he would not go in broad daylight.

Dan said his wife worked at the Gold Coast, which is a second or possibly one-and-a-half-rate, just-barely-off-strip hotel. A MAJOR UPGRADE to the Longhorn, frankly. She finagled a room for us at a very agreeable price. We booked it for THREE NIGHTS, despite Dan’s assurance he would be done well before this.

And Speaking of “Touch and GO,” the mechanic’s place was basically under the approach path to Nellis Air Force Base, so we had our own private airshow all day every day. F16, F35, A-10…pretty fun to watch!

Well, needless to say, Dan was NOT done in a day. In fact it was touch-and-go that we would get out of there on day FOUR. He kept asking me if I was mad about this. I said, “ABSOLUTELY NOT MAD…par for the course!”  None of the issues he ran into were unexpected to me…fittings that wouldn’t come off without a lot of persuasion, hoses that needed to be acquired and configured, leaks in places he hadn’t touched, but couldn’t now ignore.

I had to make 6 runs to the hose/fitting shop to acquire parts to help us deal with issues that were uncovered along the way. Needless to say, I became very familiar to the counter help. And with some of the regulars.

I contemplated how many ways I could get killed at this

One regular asked me if I was driving the Smart Car in the lot. I said, “Yes, why?” He asked if I wanted to come with him that evening to participate in the sport of “Skid-Plate Racing.” I had NO IDEA what this was, so I asked him to ‘splain. He said there is a group (which means at least more than one crazy person) that like to take the rear wheels off of small, front-drive cars, replace them with metal plates and then race them around dirt tracks. The front wheels pull the cars, which just skid around the track, their back-ends flailing about on the metal plates.

He said Smart Cars are PERFECT skid-plate-racers!!!!  He is, of course,  wrong about this…Smart Cars are Rear-drive.  But these days,  facts matter less than clear and blustery statements.

I contemplated how many ways I could get killed at this, never mind the likelyhood of destroying our towed-mobility, and politely declined.  He said if we ever come back, don’t hesitate to look him up! Yet another reason to AVOID LAS VEGAS.

In the end, Dan and his mechanics fixed everything I asked him to plus a few things that came up and even implemented a few enhancements I discussed with his mechanic as we were working. And he checked over everything else…finding nothing that would be dangerous to our progress in the coming months. And while they were under the floor, I was doing some odds-and-ends around and inside the bus. For example, installing soap dispensers in the shower and a hanging fruit basket so soap/fruit don’t fall off and roll around as we drive; replacing the windshield washer motor that has not worked for awhile; installing an engine battery monitor; mounting the GPS efficiently; etc. A VERY PRODUCTIVE time.

And, for the record, Liz did NOT come to the garage every day. She used the workout room at the Gold Coast, which strangely is an underutilized resource by the typical inhabitant of Las Vegas Casinos (see above). She also walked the strip itelf, finding it to be brighter and shinier but no less awful than the Longhorn. She even finished her first knitted sock (to be clear, only ½ of a pair, but a milestone nonetheless!).

Liz has turned into a knitting MACHINE. 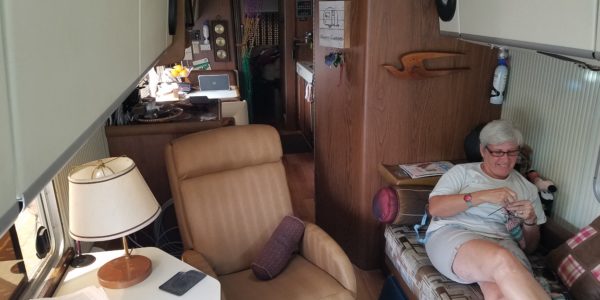 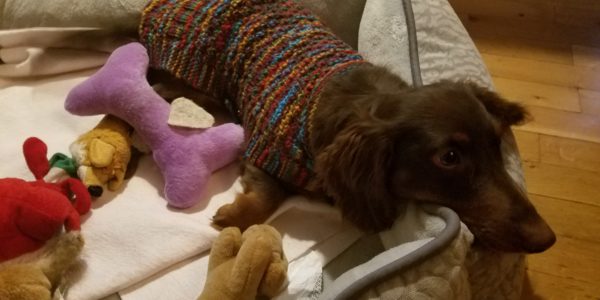 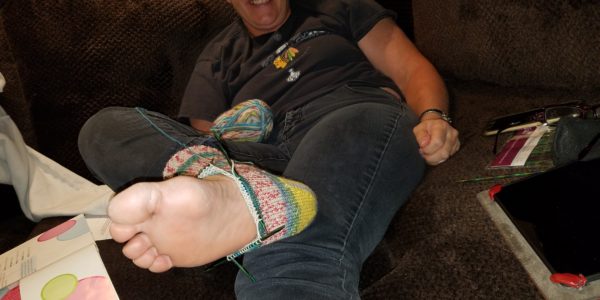 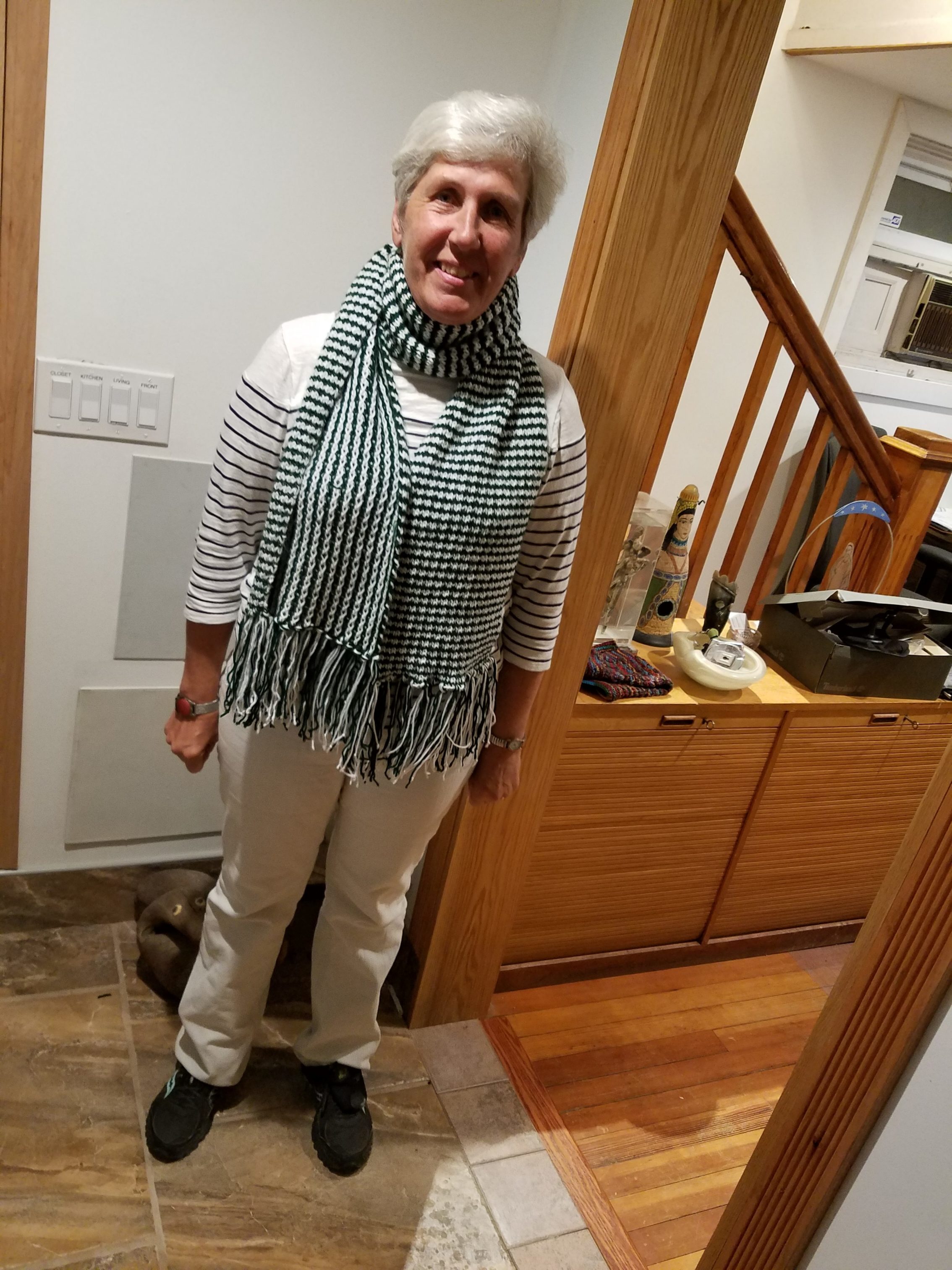 We did finally get on the road…day 4, at 4 PM. We were ready to leave earlier…had the Smart Car hooked up and ready to go. I forgot — Liz remembered (fortunately) that the car needed to be in neutral. Problem is, the car had locked the doors (a safety feature). WITH THE KEY IN THE IGNITION. And, we realized, we had left the spare keys at the RV Storage place! No way to leave, no means to get the keys.

Dan has a locksmith buddy who sez a slim-jim cannot be used on a Smart Car; have to break the window. No sense in calling for roadside assistance – since they would just break the window! After having a good laugh at our expense (“so…your car is smarter than you, apparently…”), Dan offered to drive me down (clear across town) to collect the keys. Would not take money for gas (Its just customer service, he said). So if anyone needs truck or RV service in Las Vegas Nevada, please look up Dan Bazan at Sin City Truck and Trailer. HE BELIEVES IN SERVICE!

We finally got on the road, only to overheat on the minor hills ascending out of Vegas. The Radiator fan was not working. AAAACCKKK. However, I had just worked on this fan last fall, in Olympia, Wa. with Bluebird-friend Pat. I knew there was a fuse for the clutch that engages the fan, and I knew where it was because I installed it!! So I Replaced it, and all was truly copacetic!!! The rest of the trip to the Phoenix-area, with a brief stop in Kingman, Az. was uneventful.

Our trip, if not our lives, almost ended abruptly. More in the next post!!!

13 thoughts on “(No) Fear and Loathing in Las Vegas”

Disaster nearly struck as we were entering the outskirts of Phoenix.  [su_pullquote align="right"] This was about to end VERY badly.…

"Plan" is a four letter word, and it something we try not to do too much or too carefully... [su_spacer]…