We had about 4 “extra” days between Little Rock and St. Louis. What to do.  Where to go.   MEMPHIS!  Home of BBQ, Elvis, the Blues and Fedex.

The last time I was in Memphis I was on a pilgrimage to Mardi Gras in about 1981.  Then, we stopped in Memphis long enough to giggle at the shrine that is Elvis’ mansion.    So there is that (still).   If we needed another reason:  Although several cities claim the Blues,  Memphis does so legitimately; with a vibrant, extant music scene, a ton of music history and as a waypoint from the Delta to Chicago.

Plus, Liz has never been there.  So WHY NOT?

When the idea of “Memphis” was just that,  I explored options for parking.  There is an RV facility as part of the expansive Graceland Complex.  That’s right.  COMPLEX.  In 1981 Graceland was only Elvis’ mansion,  and across the street a strip mall.  Much has changed.  There is now a MUSEUM and ENTERTAINMENT COMPLEX.  And an RV Park.  BOOKED.  DONE!!!

We arrived at Graceland’s RV facility on Saturday afternoon, so we decided to head down to Beale Street for some Music and BBQ.  Our UBER driver told us Memphis was a “mini-Chicago.”

“How so, “ I asked,  expecting to hear about Music Clubs (and hoping for a recommendation).  He said, “People are shot (and killed) here almost as much in Chicago.”  Now we get this all the time…Chicago being the “murder Capital of the world” according to ‘some’ whose alternate facts are all the rage.  In fact,  per capita,  Chicago is about 19th in the USA,  behind St, Louis, New Orleans, Tulsa (you can look it up!)…AND MEMPHIS.

We infer that people in Memphis shoot-freely and are inherently bad shots?

Curious,  I reviewed the facts (one version, anyway…we all know there are many).   I find that Memphis is actually #12 in murders,  but is #2 in Shot-but-not-killed.  So, do we infer that people in Memphis shoot-freely and are inherently bad shots?

The driver also advised us NOT to walk around the Graceland area alone, or at night.  I wondered if this was the kind of recommendation you might receive from a suburban UBER driver about Chicago,  including our neighborhood near Wrigley Field.  Where we walk at all times without apprehension.  Where our “neighbors” have recently spent $1B (that is a $B) in improvements.  There is a guard shack for the RV park, so I guess we won’t test this theory.

Anyway,  the driver couldn’t (or wouldn’t) make a music-club recommendation.  Dinged him 1 star and no tip…usually UBER is great for this.  He dropped us off and we decided to wander.  Which was a GREAT idea.  It was sunny and beautiful and Beale  street was closed to traffic and crowded.  Not clear if this was a “festival” or normal for a weekend.

All the clubs have music beginning at noon and running until 1:00AM.  And NO COVER CHARGE.  Except at B.B. King’s club.  So we went to several clubs,  saw some great music, fed the tip jars appropriately  AND eventually had dinner at BB’s to help amortize the cover charge.

We later learned that there IS a “cover charge” just to get on Beale Street after dark…keeps the rabble away according to our next Uber-guy.  We arrived early enuf that our payments could be made directly to the tip jars.

At one club,  we sat near the front,  and at the table in front of us was a duo of ladies more or less our age, one Black and one White (an important factoid as I will discuss below) who were wanna-be musicians.  How do I know?  They pulled out their horns and started playing with the band.  They were quite good!

I asked them if they were actually part of the band…they said no…they were auditioning!  Could be an anomaly that two spectators break out instruments they just happen to be carrying (and BIG horns, not harmonicas) and join in (on a Saturday,  not a Tuesday “open-mike” night).  Or, it could be normal!  I get a sense that it is more the latter than the former;  Memphis and Music are historically inseparable.

While in Memphis,  we took in a bit of the “other” stuff to see and do.  I will save Graceland for last (or maybe for its own post).   Music dominates…the Stax Records Museum and Sun Studios both have tours, artifacts and history.  Both are AWESOME…highly recommended.

The Stax story is especially interesting…the very-modern museum covers the entire timeline of this iconic Soul Music sound and label.  Especially interesting was the integrated nature of everything that transpired at Stax,  which functioned more as a family than a business and encouraged musicians, Black and White, to create together the “Memphis Sound.”

The world,  and especially the South was not in the slightest racially integrated in the 50’s and 60’s, but Stax was obviously so; Black and White musicians performing and recording and working together spectacularly.   The Museum has lots of Video, Audio (of course!) and historical exhibits. 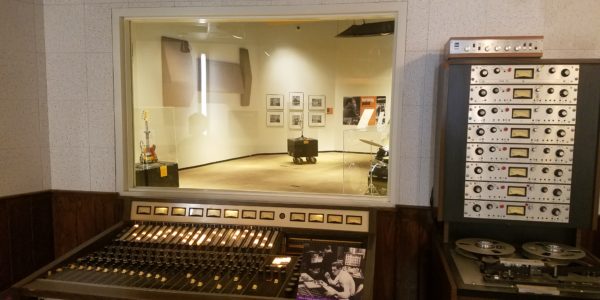 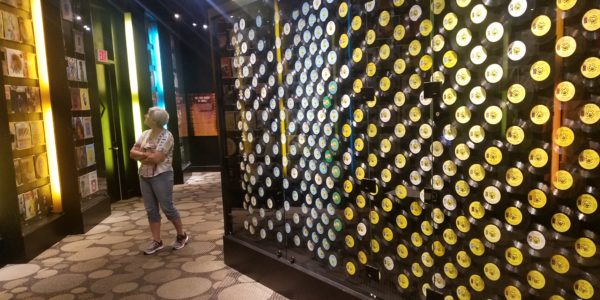 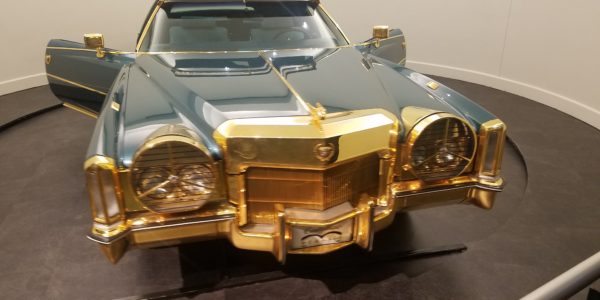 Perhaps the most interesting:  Stax as a record label moved to LA and then folded in 1975,  but today there is a Charter School and Music Academy on the site of the Studio.  Stax Academy places 100% of its inner-city-Memphis students in some form of post-graduate education (college is not for everyone,  that’s for sure).

The Sun Studio is as historical,  but exactly the opposite of the Stax Museum.  No fancy video, not “polished” though lots of artifacts.  This is Sam Phillips’ actual studio, which sat vacant for many years and FORTUNATELY did not succumb to the wrecker’s ball.  The studio closed and the building was abandoned complete with most of its contents!

Today one can tour the actual studio where history was made and see spectacular artifacts including the microphone that Elvis (and many others) used to record their epic tracks.  There are even black “Xs” (made by Sam Phillips!) on the floor where, as the story goes,  Elvis, Scotty Moore and Bill Black were instructed to stand for best sound when they recorded “That’s All Right, Mama.” And MADE HISTORY, no doubt.  There are even actual pictures and recordings of the historic “Million Dollar Quartet.” 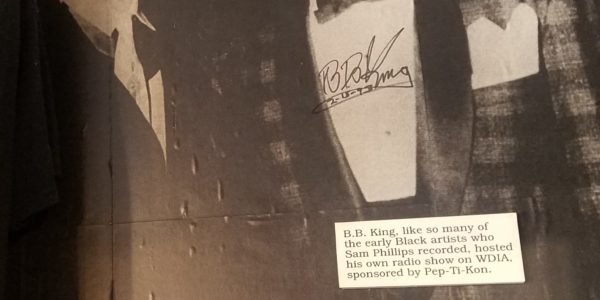 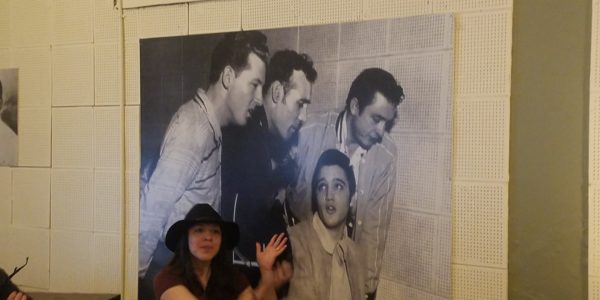 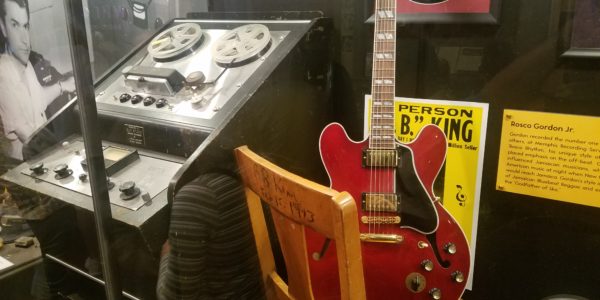 You can’t help but get goose-bumps when you stand in that studio.  So much so that the Sun Studio is, in fact,  STILL IN USE today.  Mega stars visit – there is a story that Bob Dylan kissed the “X” on the floor where Elvis stood.  We were encouraged, if we were so inclined, to also kiss the floor…by our delightful Memphian-Brazilian-immigrant tour guide.   At night,  anyone can rent the space (and an engineer) to make a recording.  Many top-tier artists have done so…even biggies such as U2! There are certainly higher-tech studios,  but none that can imbue a recording with the palpable sound of history.

There are non-musical things to see in Memphis, too.  The National Civil Rights Museum at the former Lorraine Motel (where MLK was assassinated) is probably very worth seeing.  “Probably” because the museum is CLOSED TUESDAYS (when we chose to visit – timing is everything).

The  museum is worth seeing even if you can’t go inside.  There is bunting on the rail where you can easily mentally superimpose the news pics of MLK lying after he was shot; his colleagues trying to help him while pointing in the direction of the rooming house where the shot came from (also preserved as part of the museum). To help evoke the images, the museum has parked a couple of old cars under the rail, as they would have been in 1968.

It is an interesting sidebar to the Stax story that after the assassination, Stax artists, both White and Black, spoke publically to help keep the peace.  Memphis was one of the few places in the US with no rioting and little violent, racial unrest in the aftermath.  This, even though Memphis’ Lorraine Motel was at ground zero and the city was the site of the original sanitation workers strike that brought MLK in front of that bullet.

While we missed going in to the museum,  across the street is the Blues Hall of Fame and a Soul food restaurant,  where we had an AWESOME Sweet Potato Muffin and an “Obama.”  I had to have an “Obama”…but first I had to find out what it was:  ½  Lemonade and ½ Sweet Tea.  Like an Arnold Palmer with soul.   VERY SWEET.    The rest of the afternoon we walked along the river and through downtown Memphis.

There are some fabulous old (and unfortunately empty) buildings…the economy has not been kind to Memphis outside of FedEx and Medical Centers.  If you wanted to be part of restoring a iconic old building,  Memphis would be the place for you.

There is a huge Shiny Glass Pyramid (and I mean HUGE…Luxor-in-Las Vegas-Huge) that contains the Bass Pro Shop Flagship Store.  Hard to explain, that one, but memorable!

I had hoped, while in Memphis, to be able to tour FedEx’s “Superhub.”  This is the single place where every FedEx package arrives and then departs every night.  We did see in the distance from our RV Park the Fedex Planes coming and going…hundreds daily.

The hub is not “just” a big building with lots of activity, this is the site of a major disruption in how business is done…a tipping point.  Before FedEx and its Memphis hub,  the US Mail was the quickest way to send documents and no one delivered “stuff” overnight.  So Memphis played a role arguably as significant to our culture and commerce as the computer and the internet!   I had heard rumours that a midnight tour (most active time as everything has arrived,  and is being sorted in a sort of carefully scripted mayhem for immediate departure) was offered.   But after many calls to different agents, and after being handed off and/or dropped several times,  receiving disconnected phone numbers, etc., it appears this is not possible.  Too bad.  If Walmart can have a museum,  FedEx should offer a tour.

I can say this about Memphis, Music (and Beale Street) and history:  AWESOME.  I highly recommend visiting and doing these.  There is more to see and do,  but the music clubs are great…spend a day (or several) there…you won’t be disappointed.

← Little Rock and the Mothership! ← Graceland and BBQ: All that, and more!
Next Up

Graceland and BBQ: All that, and more!

I am not really sure how to do full justice to the monument that is Graceland.  Elvis was larger than…

Little Rock and the Mothership!

[su_pullquote align="right"] And along the way, another happy accident!   [/su_pullquote] While we were in Vian,  I noticed thru…