I am not really sure how to do full justice to the monument that is Graceland.  Elvis was larger than life in many ways…not all of them, shall we say, “Smooth and Sophisticated.”  And Graceland really puts on a pedestal all of that extraneous “stuff” that filled in the musical legend.  And the presentation is almost cloyingly positive.  I have said before that presidential libraries strive to present flawed people in the best light…well that is going on here, too.

Except the light is a gold-leafed, crystal Lava Light setting on a faux-marble mantelpiece in the mirrored living room…next to the Grand Piano and 4 color TVs!

Memphians have a love-hate thing with Elvis

Maybe the best description of the Contradiction that is Elvis/Graceland came from former Chicago-friend (he is still a friend, I think,  but no longer lives in Chicago!) and Native Memphian, Brian Walsh: “Memphians have a love-hate thing with Elvis.  Brings a lot of $$$ to the city but sort of gives us a reputation as dumbass rednecks (something we really don’t need any help in portraying…).”

Graceland was actually a FABULOUS tour…especially in contrast to my last visit to the monument.  Yes…I have been to Graceland TWICE!!!  The first time was just post-college (1981 or 2?).  Several college friends were driving to Mardi Gras in New Orleans from Chicago.  Memphis was and is a logical stopping point about right in the middle.  We had driven all night and arrived at the cheap-souvenir-strip-mall across the street from Graceland at 6:30 AM.  After several cups of coffee, as I recall, our mood was giddy.  Perfect attitude for visiting Graceland!

In 1981 I got the impression that you could have taken a dip in the swimming pool if you had been so inclined.

And Graceland in 1981 was VERY DIFFERENT from today.  Back then (Elvis had died only a few years before!),  there was ONLY the Graceland Mansion (and the independently-owned souvenir shops across the street).  You paid a few bucks and walked through the mansion.  You walked through the house and grounds on your own…no iPads with headphones,  no tour guides.  I got the impression that you could have taken a dip in the swimming pool if you had been so inclined.  (I thought about it, but those thoughts included thinking better of it).   Just you and your inner, meditative self.

And hundreds of other folks,  still mourning the King’s Passing.  Tears were many.  And our giggles would have been very unappreciated,  so we did our best to keep them to ourselves.    That last part is still our reaction today – keeping giggles to ourselves!!    But today,  Graceland is, as Elvis himself was wont to say,  “Taking Care of Business” (TCB!).  BIG BIDNEZ!

There is the mansion,  of course.  And to me, at least, it is still the star.  But now,  you buy your tickets at what can only be called the “Welcome-to-Graceland-Theme-Park-and-Bigger-Than-Life-Monument-to-Extreme-Excess”, directly across the street.  The tickets to see “everything” (but not a “private” or “VIP” Tour…just with the huddled masses) were $65 each.   VIP tours were twice that.

First you see a VERY INSPIRATIONAL movie – just like the introduction film at ALL presidential libraries.  Then you are herded on a bus and given an iPad with headphones.  The bus drives across the street to the mansion.  There,  you tour through some of the building and grounds,  with the iPad narration by John Stamos and of course, musical accompaniments.  With HUNDREDS of your closest friends.  In a long, single-file line of true believers.  All Reverently silent. Some tears.

The tour and iPad descriptions are,  to be fair, EXCELLENT, if somewhat one-sided.  They really did fill in some of the detail so lacking in the caricature of Elvis that most of the world knew.  And there were lots of artifacts to back up the presentation of his diabetically-sweet personality, religious orientation, charitable giving, etc. He was NOT the person you saw IN-YOUR-FACE;  I got the sense Elvis WAS just a dumbass Redneck – a fundamentally good person — who succumbed to his talent and worldwide adulation.

After the mansion,  one lines up for the bus to return across the street.  We wanted to walk the 100 yds and not wait in the line-of-faithful for the bus…but this was forbidden…I did not see the tasers and cattle-prods,  but I am sure they were there to keep us in (the) line.

And across the street are multiple buildings with MANY exhibits.  Really good exhibits,  actually.  Perhaps the best containing many of the cars Elvis owned, in immaculate condition and with good documentation.  But also artifacts, clothing, video from performances, a movie theatre featuring all of Elvis’ cinematic glory (his movies were pretty bad, truth be told), etc. etc. etc.    There are even two of Elvis’ Airplanes.  The bigger of the two continued the decorating motif from the Mansion,  including Gold Plated Bathroom Fixtures with gold-flecked porcelain bowls,  several TVs and plush velvet and leather furniture. 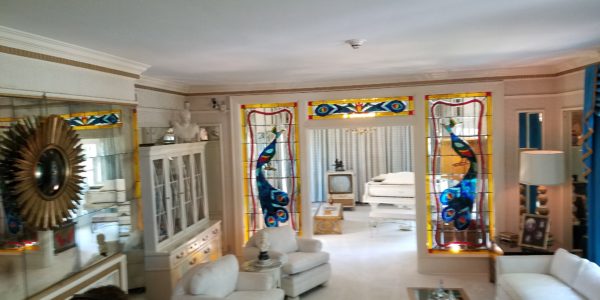 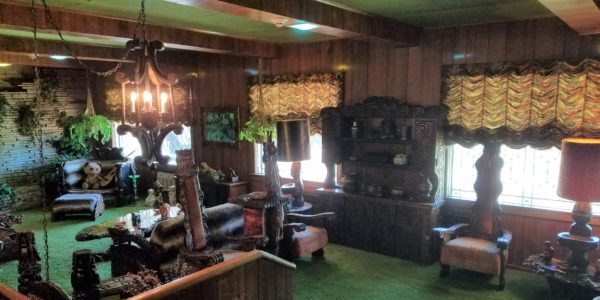 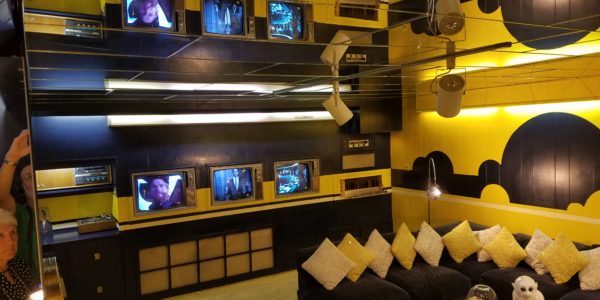 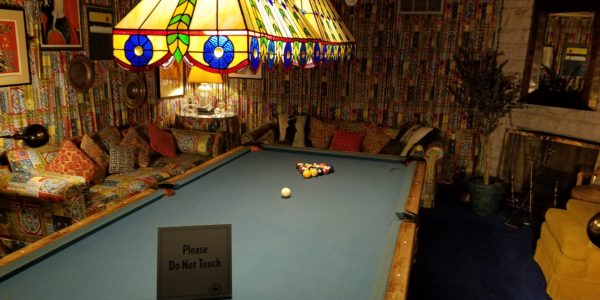 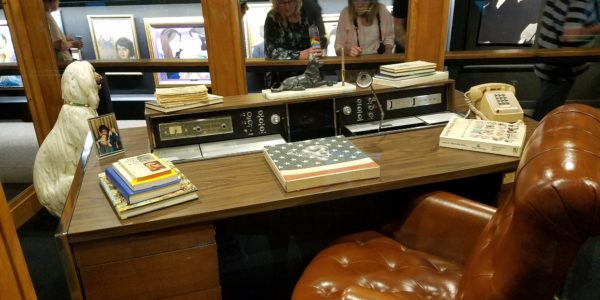 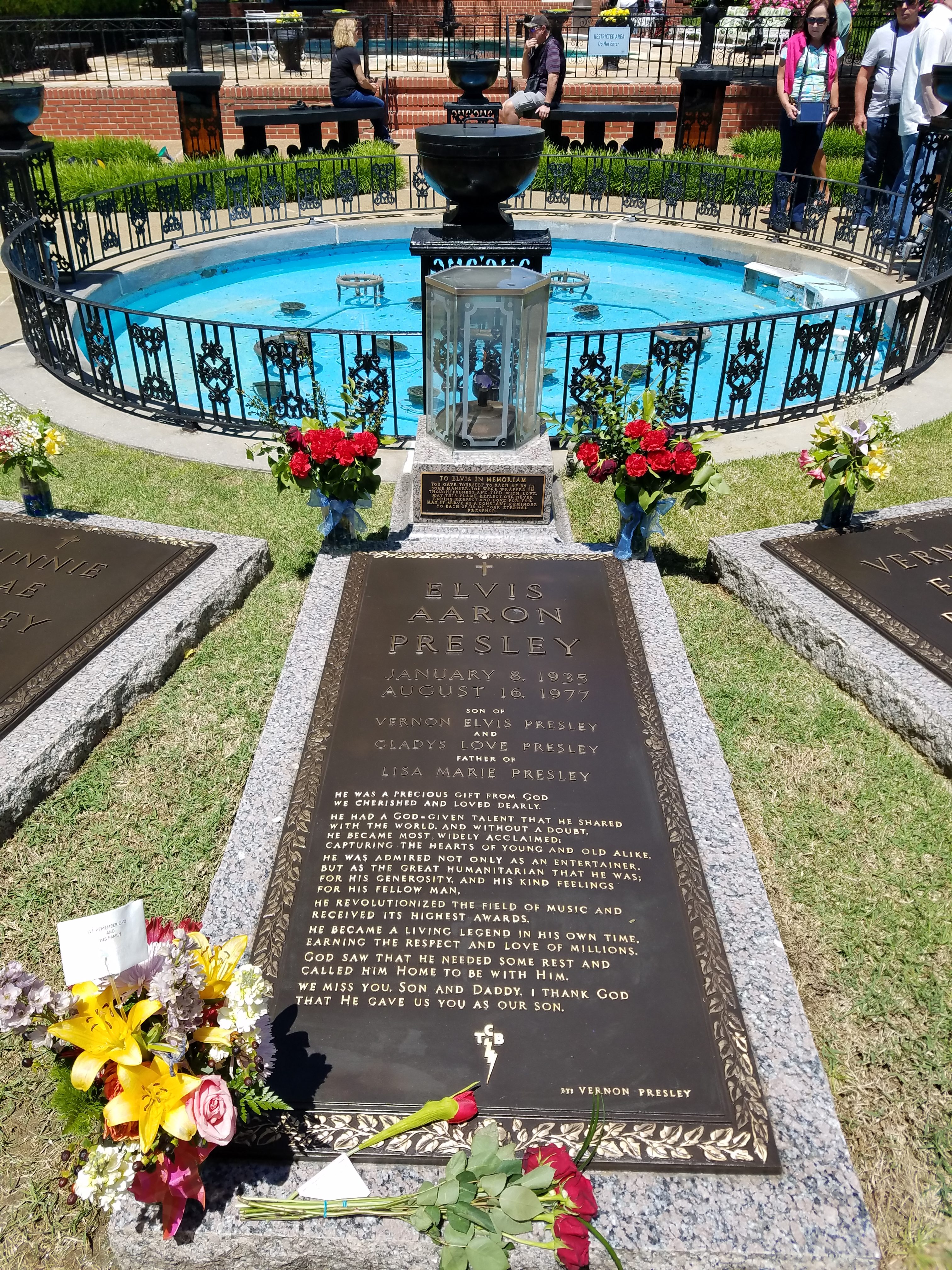 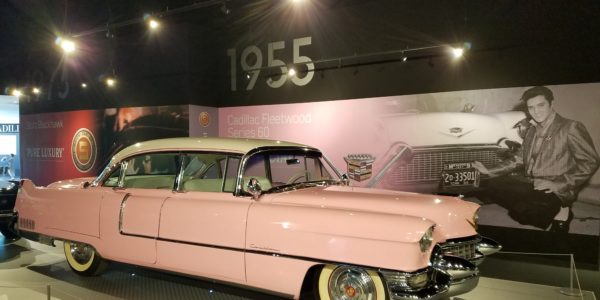 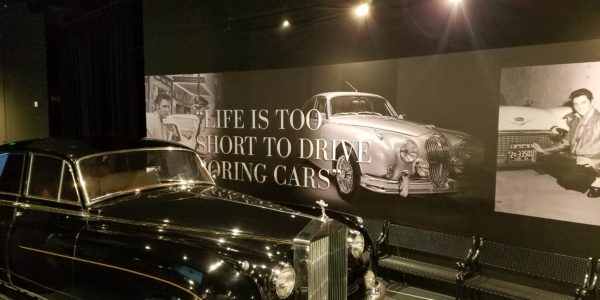 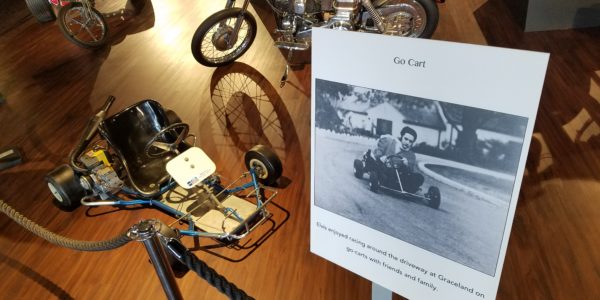 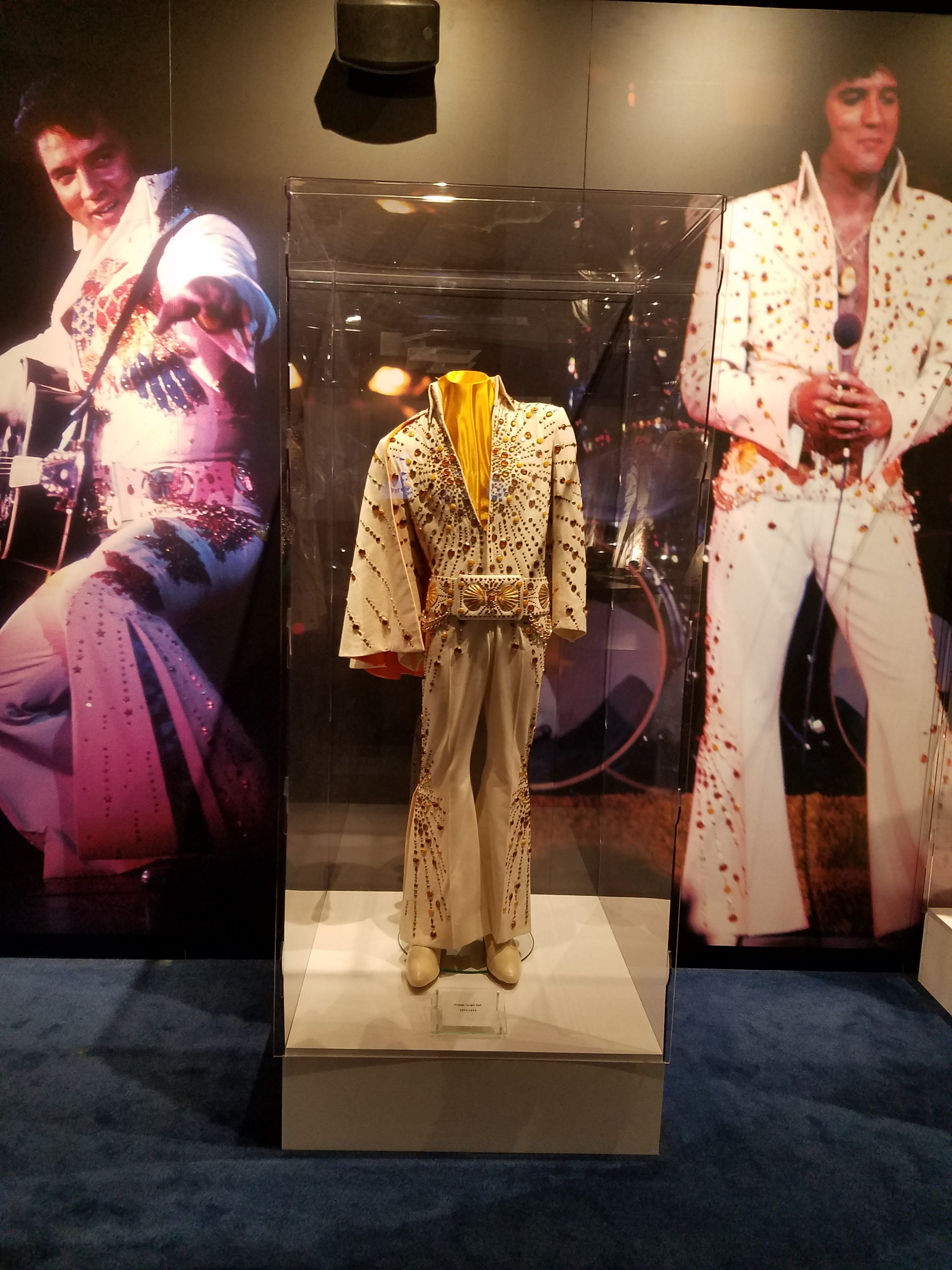 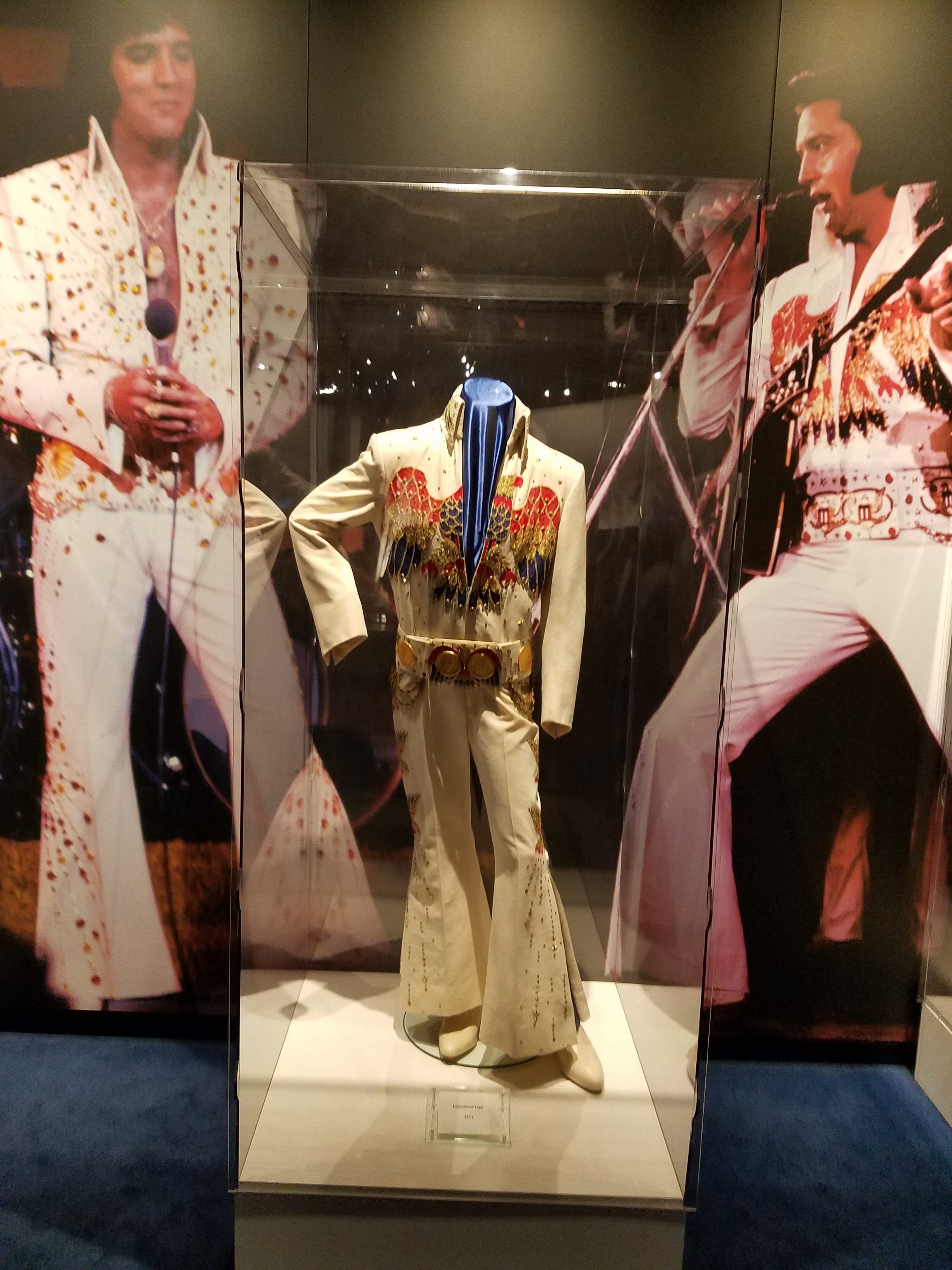 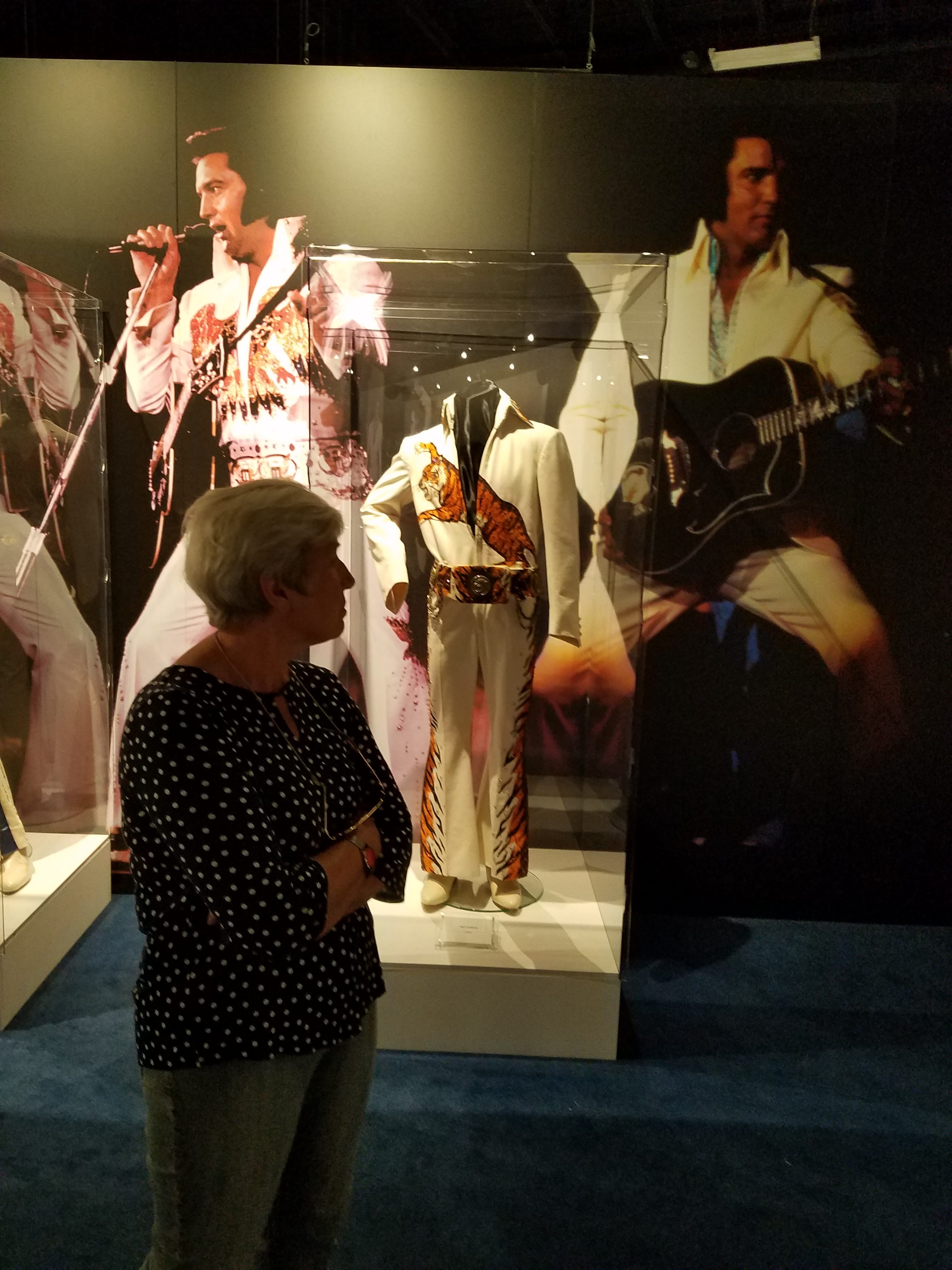 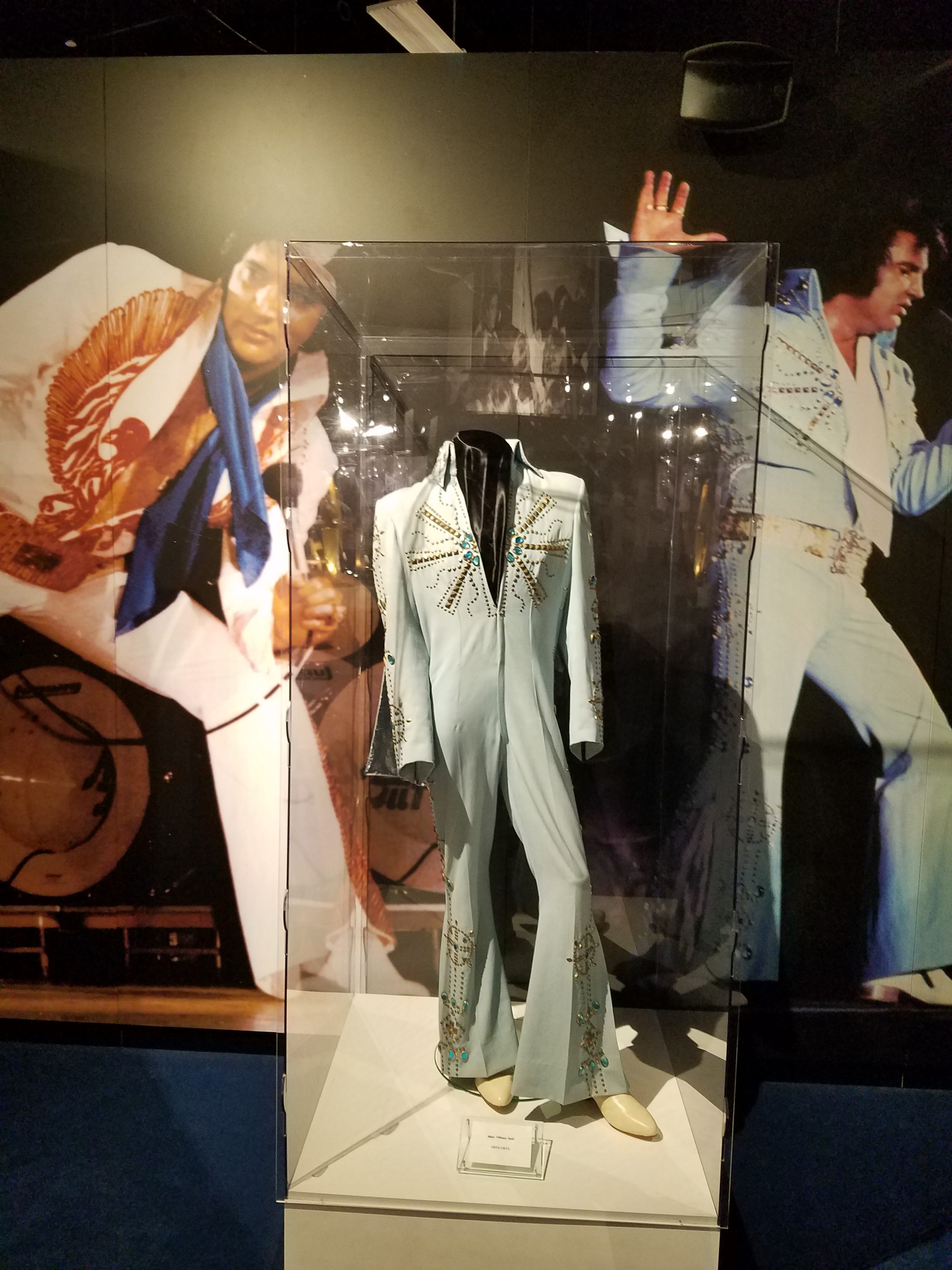 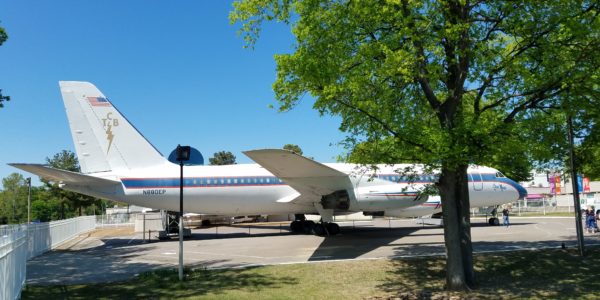 And of course, there were MULTIPLE gift shops.  These are like little museums, too,  except that you can buy the stuff.  All of it in the theme (i.e tacky and gaudy) and for none of it do we have room in either our home or the bus.  I did manage to procur a replica of Elvis’ driver’s license and a guitar pick featuring his famous mantra: “TCB.”  These are now glued to our sticker-wall in the bus!

Our last goal in Memphis (Sun, Check.  Stax, Check.  Beale Street, Check/Double-Check. MLK/Civil Right Museum, Check) was to HAVE SOME BBQ.  The problem is,  there is SO MUCH to choose from!  How does one pick from the HUNDREDS of options?  Online reviews are of little help…it seems these are for every place either (both)  5* (loved it,  best BBQ ever) or 1* (hated it, dry, tasteless, bad service, sick afterwards).  Just like politics…very difficult to get at the truth. e ended up at three different BBQ options.    BB King’s place was an easy choice because we were there for music.  Our self-described redneck, dumbass, Memphian friend Brian suggested Rendezvous (best ribs EVER, according to Brian).

He may or may not be right with his hypebole, since choosing “The Best” BBQ in Memphis is a little like recommending the “Best” pizza in Chicago.  No one agrees,  but many are good.  We DID like Rendezvous VERY much (mayBE the best ribs ever!), which we can now discuss fully with him the next time we see him.   And, Rendezvous was preceded by another trip to nearby Beale Street,  where the music was in full effect (still no cover charge) at 2:00 on a Tuesday Afternoon!

Our third BBQ sojourn became OBVIOUS to us on a drive down Elvis Presley Blvd.  How could we NOT stop at Marlowe’s,  which featured a pink-painted Airstream Trailer meant to resemble a Pig,  but looking more like a Penis in the parking lot.  The food there was as you would expect for a place with such parking lot adornment.  Actually,  better, because it was pretty good and they had a local IPA,  very cold.

I am not really sure if (or when) we will return to Memphis.  I feel like we saw what we needed to see AND ate what we needed to eat and heard some good stuff.  But if we were passing through I am thinking, YES, with more BBQ and Beale Street and Less Graceland (in fact,  TWICE is way more than enuf of that!).  Memphis is unpretentious, in very stark contrast to its favorite son, and well worth repeated stops!

3 thoughts on “Graceland and BBQ: All that, and more!”

There has been a bit of Radio Silence since Memphis.  Part of that surely has to do with the cultural…