Well,  I said we were slowing down.  That is an UNDERSTATEMENT.

First we stayed at Oklawaha RV Resort,  which is actually a KOA.  Not far from Ocala and near Ft. McCoy. Which is to say, not much nearby.  Nice uncrowded large campground – so uncrowded that the security guard said to pick any open spot.    Nice laundry. Wifi that struggles and absolutely no cell service.   Seems to be oriented towards ATV-folks.

The most memorable thing about this RV Park was how soft the ground was.  Normally,  we put the hydraulic jacks down to level the bus.  Here,  we put them down to distribute our 28,000 lbs over more points.  I really was afraid we were going to gradually sink to the axles, thereby becoming a permanent resident.   With the help of a neighbor (also a Bluebird owner),  we found some wood and other platforms to put the jacks on.  Even then,  they sank about 6”.  But altogether,  with 10 points of contact vs. 6,  the bus really did not sink any further or far enough to be troublesome.

Not much to do at Oklawaha.  There were 2 ”Nature trails.”  We walked them both…probably 2 miles in total going nowhere and through nothing interesting.  But not a bad thing!  Liz got out her sewing machine and started a couple pillows.  I poked around in the new battery monitoring meter that we had installed at Lazzari. Read a book. Watched the Hawks on TV.  Prepared some tax schedules to send to Mr. Sturt our longtime friend and accountant.  None of this is glamourous,  but we were learning to be comfortable with the idea that we are not “on vacation” (and therefore always needing to do vacation things).  Sometimes we need to do regular things.

Next,  we moved to Bull Creek Fish Camp. The strategy was to inch closer to Flagler Beach,  where we are meeting friends Bob and Barb White as they head back north after cruising the Caribbean.  I tried to find places…almost everything was full.  We did not realize that this is SPRING BREAK and also “Bike Week.”  So,  a combination of college frat-boys and middle-aged (probably attorney) biker-wannabees filling every hotel, motel and,  as it turns out,  campground.

I did manage to find a place… a very small campground near Bunnell, Fl.  and we turned out to have a great spot overlooking a small creek (Bull Creek?) that empties into a large lake.  The GPS had a hard time getting us there (tho not as difficult as the next place—more below).  Some of the roads were about 1.5 lanes with a pretty sharp drop off to the shoulder.  Not a problem until a big log truck comes the other way! 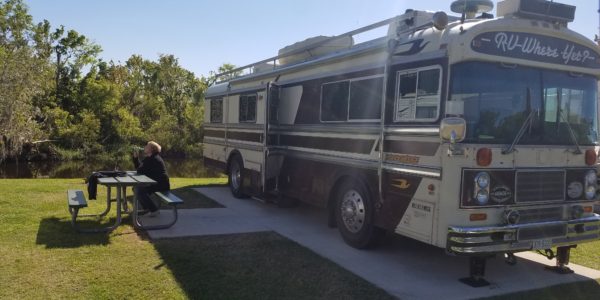 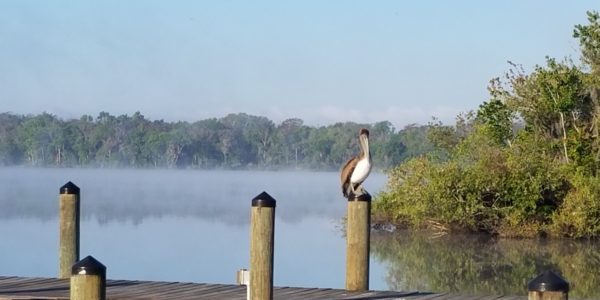 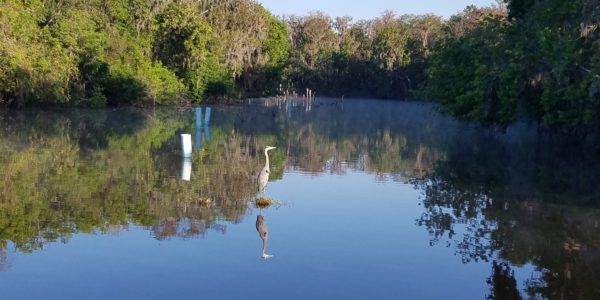 Bull Creek Fish Camp seemed to be even more remote and isolated than Oklawaha.  The camping spot was MUCH nicer…concrete and level.   Very scenic, actually.  And there was a Bar and Restaurant!  This sounded promising!  With St. Pats day upon us, and my Birthday right after,  Liz suggested we PARTY.    Unfortunately,  we managed to pick a bar that closed at 9:00 on a Friday night on the day of the Patron Saint of Green Beer (and vomit).  NO PROBLEM, though, as 9:00 still is after Liz’s bedtime!   We had our “green beer” (or the closest we could get—in a Green Bottle!) and retired.  For the evening…we are already retired!

I assumed Liz put the wrong target in the GPS (something,  in the interest of full disclosure, I have also done once or twice).  But, no,  she had selected the right destination…the GPS just had a completely bogus address for this campground!

We decided, with all the excitement possible at Bull Creek (sarcasm alert!), that we would head over to the coast and see what “Bike Week” was all about.  As a target,  Liz put “Beverly Beach Camptown” (our next RV Reservation) into the GPS.  THAT WAS A MISTAKE.  The GPS kept taking us AWAY from the ocean.  This did not sound right to me.  But Liz has more than once “suggested” that I not argue with the “lady” in the box (I normally use a “B” word). “Suggested” being a euphemism for “shut up and do what she tells you.”   Eventually,  we “arrived” at the spot…on a gravel road MILES from the beach…and no campground in sight.  I assumed Liz put the wrong target in the GPS (something,  in the interest of full disclosure, I have also done once or twice).  But, no,  she had selected the right destination…the GPS just had a completely bogus address for this campground! 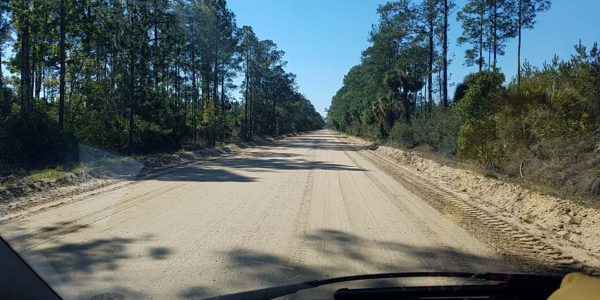 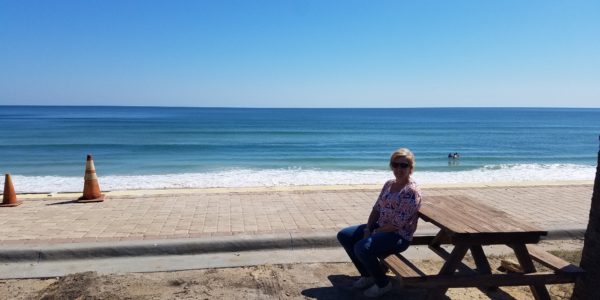 Once we found the campground (by targeting its address), we stopped at a beachside bar. Ostensibly for beer,  but more importantly for WiFi.  There,  Liz updated our accounts, and I updated the list of local beers partaken.  75 degrees,  ocean across the road.  Noisy and smelly motorcycles and motorcyclists of all varieties going by.  It doesn’t get any better!  AWESOME!!! 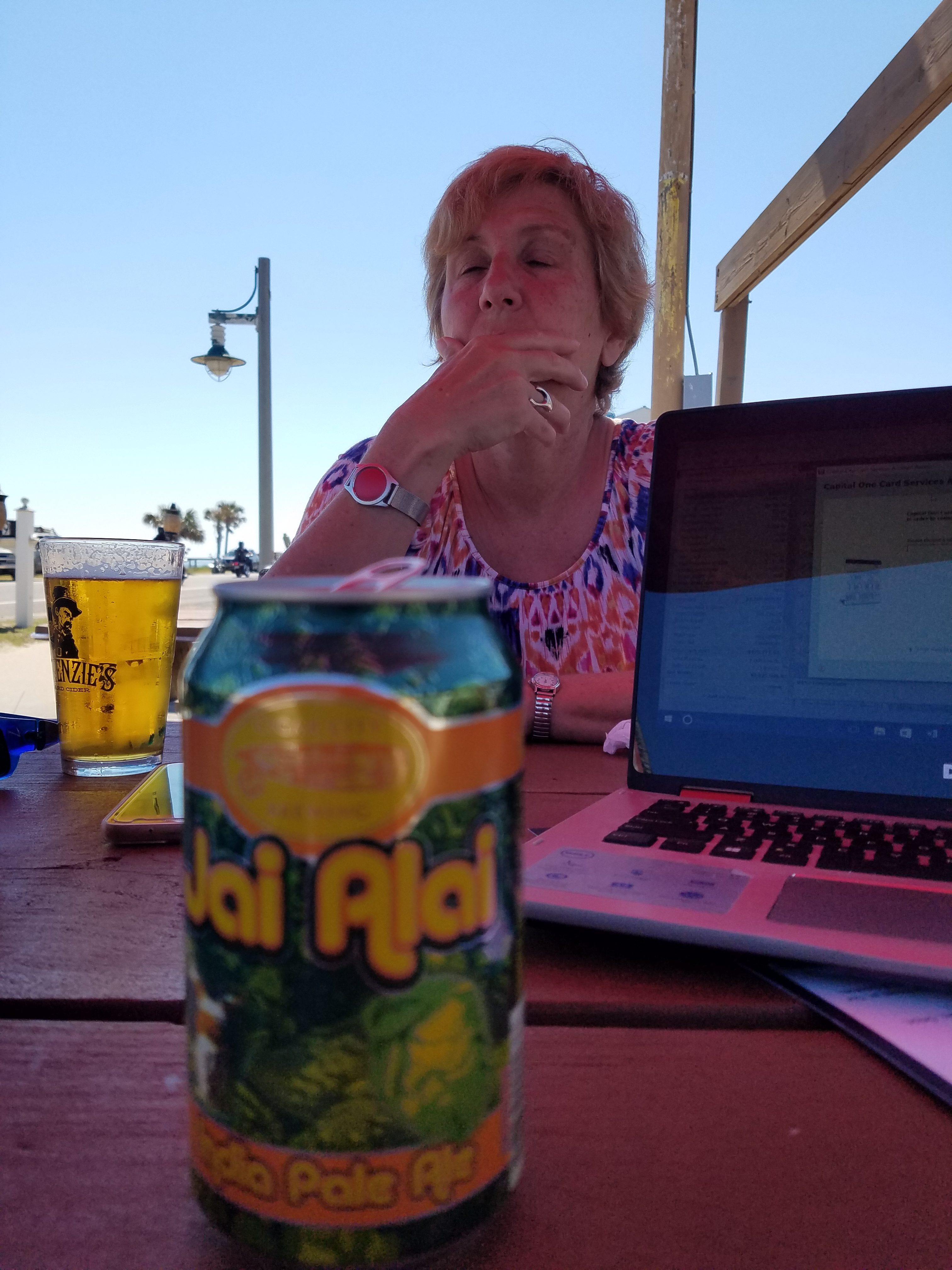 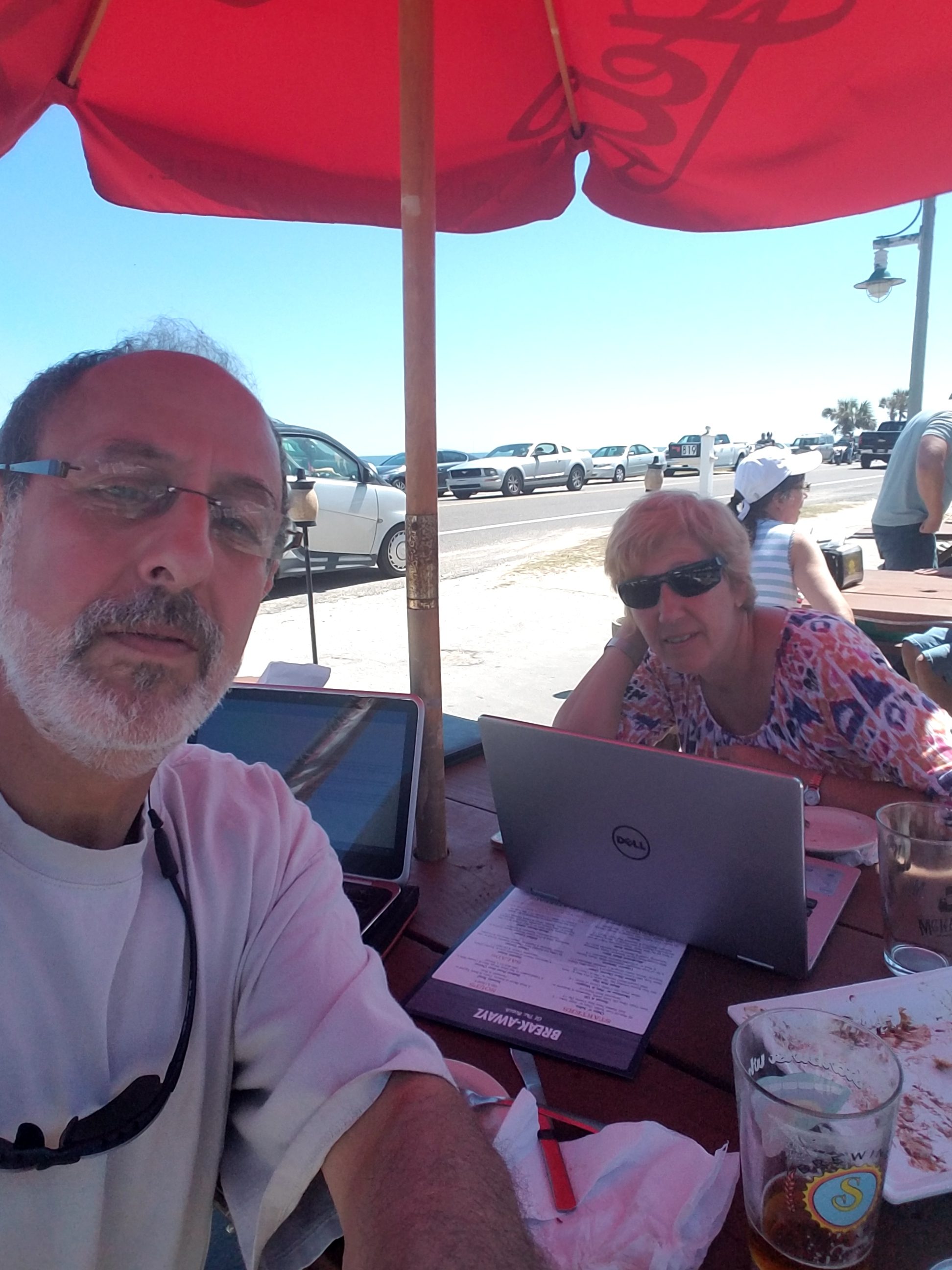 2 thoughts on “Center of Florida, Middle of Nowhere”

← If Variety is the spice of life… ← The New Normal! Road-trip Soirees (and a bit of melancholy)
Next Up

The New Normal! Road-trip Soirees (and a bit of melancholy)

We’ve spent the past few days hanging out on the Florida and Georgia Coasts.  WITH AN AWESOME TWIST!!! Our friends, …

If Variety is the spice of life...