I don’t want to say we are getting immune to all the strangeness we encounter, but I can say almost nothing surprises us anymore. Because “Surprise” would imply that we have expectations, which we do not. Expectations lead to disappointment – and surprise!!!! However, we just stayed at one of the weirdest – and most wonderful – places of all! And also at Liz’s Brother’s.  NOT the same place, though you could think so from our description! There is a back story (of course!).

We expect the oncoming colds to follow us for a week or so, but as of yet we are not afflicted.

We left the WOG rally and headed up to Atlanta (Decatur, actually) to visit Liz’s brother David and Stephanie and their little terrorists – Eddie, Joseph and Phillip.

Liz, it turns out with no prior experience in the area, was like the Pied Piper (or a stiff narcotic) to the littlest 2yr old Phillip. He called her “Lizbeth” (though no one had ever told him that “Liz” was short for anything) and she could stop him mid-tantrum. Liz’ Piper-ness was scientifically proven  — he had more than a couple of tantrums while we were there, and each was immediately quiesced (is that a word?) by the appearance of Lizbeth.

COMPLETELY unexpected … so much so that Stephanie offered for us to take him on the road for awhile (which we declined politely at first, but less so after each offer).

While at David’s “For a couple nites,” we ALMOST had another happy accident. After walking two of the kidlets to school one morning (they led us on a path through the woods such that we were expecting to be complicit in a truancy event, but this turned out in fact to be a short cut), we noticed a Jeep in the adjacent driveway – WITH A FOR SALE SIGN. 1997 Wrangler, looking to be in good condition. This seemed too good to be true. It was even beige like RV WHERE YET. And as we walked by, the neighbor’s son walked past – it was his car!!! Asked the price – he told us (and had just reduced it). About what we wanted to pay!

THIS COULD NOT BE AN ACCIDENT! We are looking for a Jeep, the next door neighbor has a Jeep for sale.

I asked David if he would mind if we stayed a couple days to consummate the deal. David at first seemed reluctant. Actually, that might be an understatement – there was a flash of abject terror in his eyes! But then he remembered the effect Liz was having on Phillip and said, “Well, you are not a lot of trouble parked on the street in front…”

I could tell he was thinking, “And we can always claim we don’t know you…”

If we were going to buy a Jeep, we had to sell the Clown Car. We took the it to CarMax to get an appraisal. If anyone is looking to buy or sell a car, I can tell you CarMax is the BEST experience I have had in this. Anyway, CarMax said they would give us $2,500 for the CC. But we would need the Physical Title, which was back in Chicago. I had intended to buy/sell cars in December AFTER we had been home and AFTER I had picked up the title. Fortunately, Liz knew where it was in Chicago and Rich, our neighbor could find it and FedEx it to us. So, we were READY to do the deal!!!

Next day after school (Neighbor’s son is in high school), we did a test drive. It seemed to be functional. I said if it was still available the next day, the next step for us would be to have a mechanic look at it (and I found one that would, just down the road). Next morning I texted; He said that two other folks had passed on purchase (should have been a clue) so it was indeed available still. His dad could organize for us to take it to the mechanic as he was already in school. LOOKING GOOD. I texted Dad…

Dad called me shortly thereafter and said, “Sorry…cannot sell it to you.” “Why,” I asked? “Because the frame is bad…before we sell this to A NEIGHBOR (or his Sister), we’d need to get that replaced/fixed (several Thousand$$$$).”

He felt it would be bad for neighborhood relations to sell it to us. The underlying implication? Someone else, maybe, but definitely not us. I ASSUME our mechanic would have uncovered this (the two potential buyers that had passed apparently WERE mechanics), but I thanked him profusely, and we prepared for departure the next day, with Clown Car still in tow.

Since we were now actually leaving, it was time to identify a target. We had a week or so before we were to turn up in Tampa to see an old friend. I looked on the “Harvest Host” website and identified something just up our alley. There is a HUGE Flea Market near Savannah (Keller’s – been there for YEARS). They accept RVs FOR FREE and even have electrical hookups (for a nominal $15/nite). AND, the upcoming weekend was their annual “Autumn Festival,” with jumping castles, music, food etc. in addition to 600 booths with, as it turned out, more stuff than I have ever seen (and certainly more stuff than will fit in RV WHERE YET).

I had checked with other RV Park options but found that everything in South Georgia and Northern Florida was full to capacity because of the Florida-Georgia Football Game in Jacksonville that weekend – a BIG DEAL according to Stephanie. We asked Ms. Keller herself if we could stay a couple nights, and received a resounding “Y’all are welcome, please come by…”

So we did. And when we got there, she thanked us profusely for staying with them!!! And it was all that you could imagine a Flea Market would be. And more. It began with breakfast onsite featuring pancakes with their own home-manufactured Sugar Cane Syrup – they had a HUGE old engine pressing cane and their own pots for boiling it down. Not to mention a working blacksmith shop, and an old 1920’s Diesel engine powering an old Sawmill, etc. All interspersed with booth after booth of wonderful items.

And, to top it off, some live music (excellent musicians, too!)!!!

Really, our only concern was that someone might confuse RV WHERE YET with some of the things for sale…perhaps for $3.50 as a package with the other Old Bluebird parked across from us! I figured it would be hard for them to drag the bus away without us noticing the commotion, so we were not that concerned, and instead just enjoyed the festival!

During the weekend, we came to realize that a FLEA MARKET is one of the weirdest – and nicest — places we have stayed. Obviously, there is a LOT of merchandise…most of it was here instead of at a garage sale. Some was new merchandise of the dollar store variety. Interspersed were booths selling leather goods, high-end cowboy boots, new motor scooters and more. Even puppies and exotic birds. Several food shops selling home-made chili, burgers, sausages, fries, chicharrones and relatively inexpensive beer. Easy to spend a day wandering around, even if we were not buying. 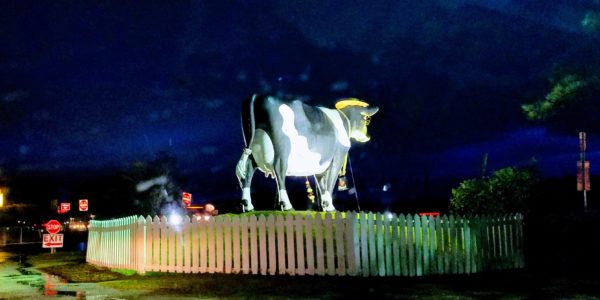 Night Guard at the FleaMarketGate 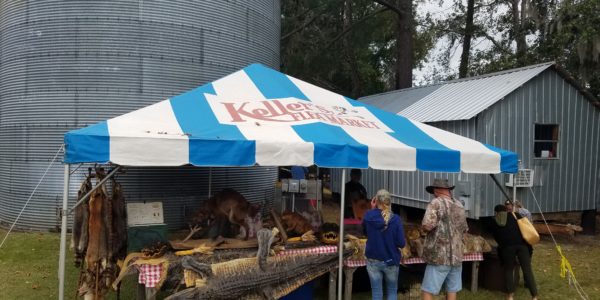 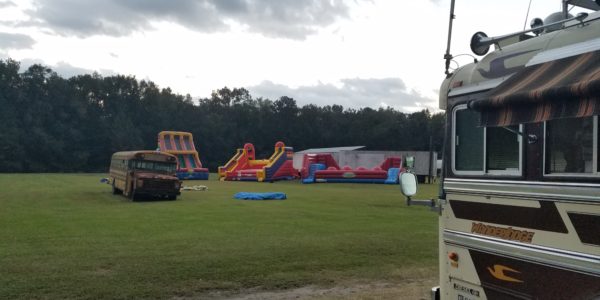 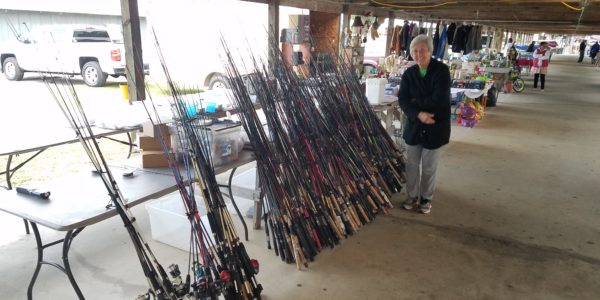 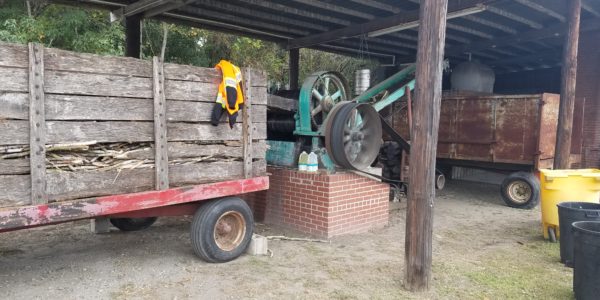 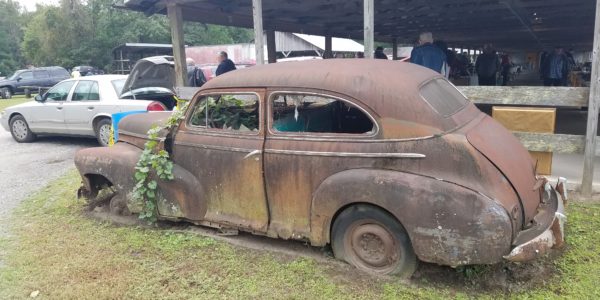 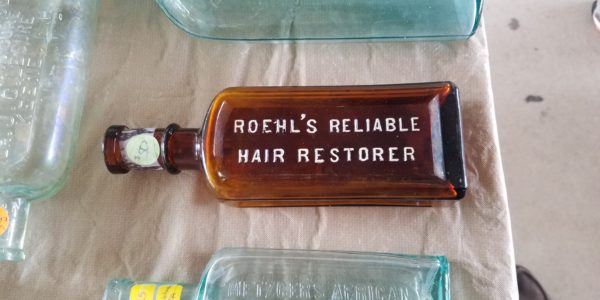 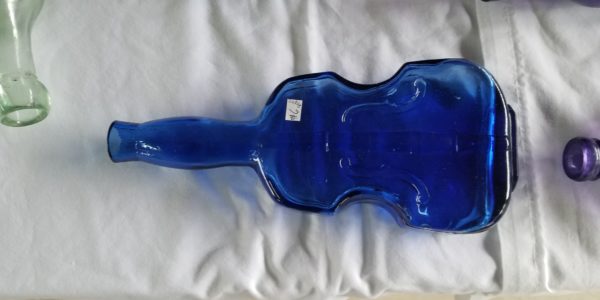 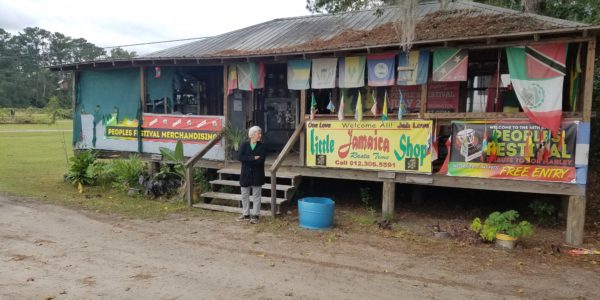 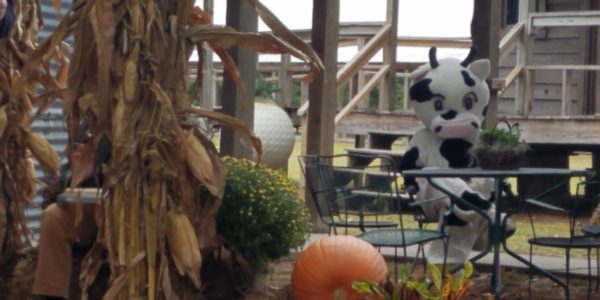 Ms. Keller told us a little about the history of this market, which has been going on every weekend for 26 years. It seems that as Savannah (only 10 miles away) was being historically preserved (and gentrified), lots of shops were sort of pushed out – could not afford the rent and no place to go. Mr. Keller had a farm with some sheds and a desire not to farm anymore (actually, his farming was no longer possible/profitable). He put 2 and 2 together and created a venue for these merchants. All it takes is $20 a weekend-day to rent a table and sell whatever. And there have been 600 vendors every weekend since!!!

The adjacent fields, empty when we arrived on Friday, were FULL of local shoppers during the market hours on Saturday and Sunday. A line of cars, like in “Field of Dreams” leading to Keller’s. Harvest-Host members like us are just one more way of keeping that line long.

I guess the half-life of our presence-hang-over is shorter than expected!

Our time at Keller’s came to an end, and we moved onwards. Now AFTER the Football game, we easily secured a place at Blythe Island County Park near Brunswick, GA and near Stephanie’s parents. Phyllis and Steve had already hosted us (twice!) a year or so ago, and despite this still INSISTED we stop by.

It is hard to refuse Southern Hospitality…in fact, what is really hard is to figure out why anyone would try! The campground at Blythe turned out to be EXCELLENT. Huge spots, all three necessary connections, nice cool shade, good WiFi…and reasonable $$$. Spot SO NICE that instead of accepting the McNicoll’s invite to meet them at a local establishment or their place, we had them over to ours!

And the evening was delightful…sparkling clear night, equally sparkling conversation, fairly brazen racoons wandering around wondering what we were eating — we even had a chance to offer and enjoy some of the Ice Wine we have been carting around since Niagara-on-the-Lake in June. All WONDERFUL.

We look forward to returning, allowing for said half-life, of course!

1 thought on “Another first…”

← DOWNRIGHT PAINFUL ← End of an Era…
Next Up

In previous posts we described a change we were planning in our lifestyle. Specifically, the Clown Car has reached the…