As mentioned previously,  several Bluebird Friends were in Michael’s (Harms) way.  We had time, flexibility and a self-contained dwelling unit,  so we planned to head south to pitch in at Randy and Carol Dupree’s place.  According to Facebook,  at least 6 coaches were parked on their street, and all of their occupants were clearing trees, cutting up roofing debris, etc. We wanted to help, but did not want to be in the way.  I wrote to Randy – I knew he had internet access because he had posted his status and brief messages about what was happening – to ask if another set of hands would be useful.

Randy said, “C’mon down, bring your own food and water, no power…”  That is something we can do well, thanks to RV WHERE YET, so we headed out for Bainbridge, Ga.

It was too far to get there in one day, so we stopped at a Walmart.  In the morning, just to confirm, I wrote again to ask if we’d still be useful.  Randy responded that the folks already there had been up on the roof in the sun for 2 days – they were getting tired.   I told him via FB and email that the relief pitchers were up and throwing in the bullpen…we’d get there the next day.

Before rolling southward, we purchased some burger patties and buns on sale, figuring the workers would eventually be hungry, and headed south. We also fueled up everything with a tank…the news showed lines at the few gas and diesel stations with generators once we’d get to the area around Bainbridge.

Driving towards the Dupree’s place, about 4 hours south of Atlanta,  our realization sort of ramped up gradually of the utter destruction storms like this bring to people’s communities and to their lives. About 70 miles north of Bainbridge, we saw the first tree down.  As we drove southward, we started to see a tree here and there down,

Then a bunch of trees…and then whole groves of trees. Not EVERY tree, though…it was very random and capricious. And at some point we started to see debris that was once someone’s house, or roof, farm equipment or belongings. And LOTS of power lines in crumpled masses on the ground. 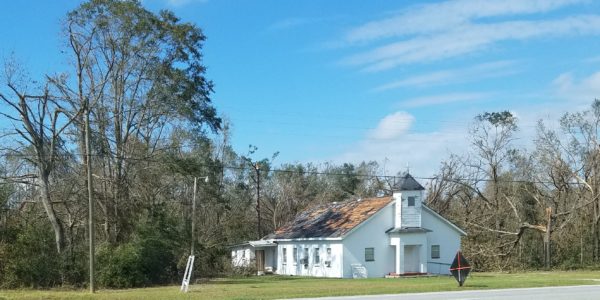 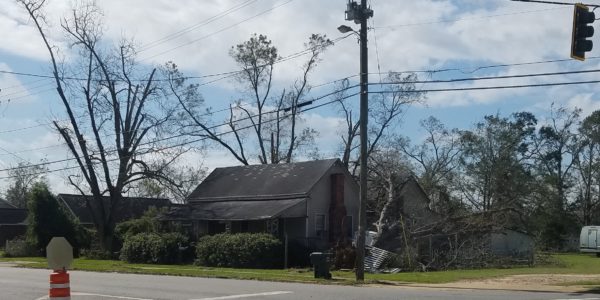 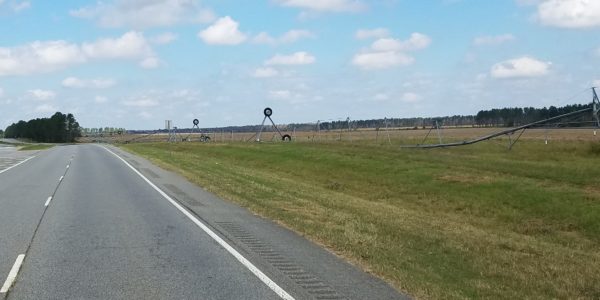 Getting to Randy’s was quite a challenge. Some of this was just GPS-created struggles…ours had NO IDEA where Randy’s address was. However, the major issue was that many streets were closed…some with trees still down, but many others were blocked by utility crews working to restore power. These problems compounded each other until we thought we’d not be able to get “there” at all!  At this point,  having come all that way, we thought if we couldn’t get “there” we could just stop and help a random person clear their trees and repair their roof…

Finally, though, we did make it to the Dupree’s. First, we had a tour of the wrong side of the tracks in Bainbridge (according to Randy when we described our route – I am not sure there is such a thing as the right side under these conditions), where people were trying to help us with directions that contradicted each other and often led us down streets blocked by cops, utility workers or trees. We pulled up just as another coach was leaving, so Randy motioned us from the roof to take their spot. After getting RV WHERE YET situated, I asked Carol how to get up on the roof, and once there, I asked Randy how I could be useful.

After observing the remnants of Randy’s former roof in the back yard (and pieces of other homes and businesses strewn all about), the first task was to go to Home Depot to get some more lumber. Amazingly, the Home Depot was open for bidnez, having enough generator power to run the registers AND quite a bit of lumber and other supplies. We obtained what was needed to complete the re-roofing project and the made our way back to Randy’s.

There I realized the full magnitude of the Community (with Capital C) we now belong to. Several Bluebird coaches were already (or still) there. They were running their generators to provide power for saws and other tools. And speaking of tools, Randy has a bunch, but many also arrived with those coaches. There was a chop saw on the roof to cut new planks. There were some saws for ripping plywood. There were large boxes of screws and several cordless drivers.

And there were guys hanging at all sorts of semi-safe angles from parts of the roof, cutting boards to fit holes the winds had created and screwing them in place. I jumped in to help; Liz couldn’t stand to watch – I assume she was calling to be sure my insurance policy was paid up.

As darkness approached, we gathered on the screened-in back porch for Spagetti Dinner and there was a plate of cheesecake. This is another beneft of the Wanderlodge community – while there was no power for Randy and Carol’s fridge, each coach had coldness contained therein, with comestibles suitably stored and available; so much so we never got to our burger patties.

And, while we we eating and chatting, and just before collapsing in exhausted heaps for the evening, THE POWER WENT ON.  A global cheer for the Utility crews, working around the clock to make this happen.

Randy then mentioned he had an AWESOME outdoor shower over in the corner of the porch. Mark from Maine offered to take the first, after the newly-powered hot water heater had a chance to do its thing. He did, and mercifully spared us any concurrent singing.

The next morning we were up on the roof early to avoid the heat of the day. The Birdbrain crew finished the planking, and with several guys above and also below in a scissors-lift, fascia was applied. At this point, the roof structure was COMPLETE and ready for the roofer (a friend of Randy’s) to spray a foam roof over the deck.

This was to be done in the next couple of days – as you can imagine, the roofer’s dance card was pretty full. But once the structure was nailed and screwed and stapled, there wasn’t much left for a crew of decidedly amateur carpenters to do, so most of the coaches including RV WHERE YET packed up to head for the Wanderlodge Owner’s Group (WOG) rally.

The Wanderlodge Owners Group (WOG) rally is something that Randy was instrumental in creating years ago and continues to sponsor…so fitting that folks on the way to HIS RALLY would be the ones fixing HIS ROOF on the way.

And by “Work” I mean possibly holding a wrench, but DEFINITELY holding a beer.

We had this rally on our calendar as our final stop of the summer season — It is held every year in South Georgia.  We went the first year we owned our coach and learned stuff, ate stuff, met people and had a great time. WOG is an AWESOME group of folks who are handy and willing to help. Unlike other rallies, there are no “formal” activities scheduled. It is generally assumed everyone is going to work on a bus project – either their own or someone else’s.  So we planned to do all of these again.

Even before the rally officially started,  Shane Fedeli, who tows a huge smoker to this rally, had it going.  This happened almost every day from 7:00 AM onwards. People buy and throw meat on; Shane keeps the fire lit and the temp. correct. The combination of Shane’s expertise (and that is SUBSTANTIAL when it comes to smoking meat!) and the group of great folks makes for an awesome time nibbling and yakking.

I know Marilyn and Dale and Tom and Megan and all the other Newfies who welcomed us so warmly this summer are smiling about us carrying their generosity and their Moose Meat this far South.

This year one of the informal events planned was an “Instant-Pot” Potluck dinner. We saved our last jar of Moose Meat for the occasion and planned to make Moose-Meat-Guinness-Stew.  Our Newfie friends wouldn’t be able to do so themselves; not because of border control restrictions on  “exotic Meat” but because of the South Georgia Heat.  It was 90F and 90% humidity in Bainbridge – this would kill most Newfies outright and maim all the rest.

Our FULL rally experience was too extensive and too much fun for one post,  so for the rest of the story,  you’ll have to wait…

1 thought on “A Sobering Experience…”

← Tennessee Welcomes the Yankees ← DOWNRIGHT PAINFUL
Next Up

Our next rally commenced in Sevierville,TN, long since “advanced” from the days when Dolly Parton grew up in the Holler…