As we may have mentioned to at least some of you,  we are considering the purchase of a new bus.  Well,  “The Bus” (as we shall refer to it in this article, not to be confused with “Our Bus,” RV WHERE YET)  is a 1986 Bluebird (specifically a PT-40) version,  which is certainly newER than RV WHERE YET,  but just as certainly not new!

Why?  Why, you ask?  And indeed we ask ourselves that question every day,  if not more often!

Well,  let’s begin by saying we MOST DEFINITELY were NOT looking for a new bus.  But friends uncovered, and felt the need to mention this one to us,  and  we decided it was worth a look because of the following characteristics:

All of those points, taken together, meant we needed to at least look…even though we would be happy spending another 5 years in our current Home!  And Look we did, traveling to Elephant Butte, New Mexico and meeting the Owner there!   The sections below include some pics…but just a teaser:  As I will elaborate on later, the owner sprung for new batteries, and after carefully evaluating the oil, coolant, air system, electrical system, etc.; and with the encouragement of various Bluebirdbrain friends,  we decided to START the big diesel!

I was a little worried about this.  What about 15 year old fuel?  Should we do an oil and filter change?    The consensus among our brain trust was:  START THE DAMN THING.  Chap Enfinger told me the story about his 1986 PT40 (the very same model), which he found outside, buried to the axles in a farm field.  THAT engine started up with nothing but fuel (we have that and it looked as good as the day it was pumped), Oil (Ours was full and clean-looking)  and a fuel filter.  Shane Fedeli suggested the same — change the oil and filters before you hit the road,  but FOR HEAVEN SAKE,  start the damn thing — we want to know if it runs!

Chap warned us of a unique (and scary) feature of old, mechanical diesels.  They will run as long as there is fuel and air.  There is a fuel solenoid, and if it sticks open,  the engine will not shut off no matter if the key is in the ignition or not.  Since the engine had been sitting for 15 years (at least),  Chap suggested someone be on the roof with a towel to stuff into the air intake in case the throttle sticks…the theory being shutting off the air is just as effective as shutting off fuel (in an emergency).  The Owner had a ladder,  and agreed to do this important safety overwatch (You can see the safety apparatus in the video,  below).

I was Expecting AT LEAST to have to crank and crank (and maybe beg and plead) to bring it to life.  Instead It started up INSTANTLY,  with no smoke or other evidence that it has been sitting in that garage for 15 years!!!  One cannot EVER say that a big diesel engine “Purrs,” but this one sounded GREAT!!!!

Liz,  came into the cabin while the engine idled happily and said, “I don’t like it…it’s too quiet!”  Translation (maybe): Now I can and perhaps have to listen to YOU!!!

And,  for the record,  when I turned off the key,  the engine shut off as well — no sticking throttle or solenoid and no towel required.  This was an important milestone if we were going to buy The Bus — the big greasy, noisy, smoky thing works as expected.

Before we get on to the Pics,  I wanted to add a little bit to the back story around why this bus was so appealing to us,  even though we are COMPLETELY happy with Our Bus, RV WHERE YET.

First and foremost,  the Bus is being offered by its ORIGINAL OWNER,  who actually drove it away from the factory in 1986.

Also,  and as important,  NO EVIDENCE OF CRITTERS  as  I crawled around in MANY cabinets and interior spaces, and found no peanut shells, fluff-nests or little black turds anywhere.    And, being stored indoors near Las Cruces,  the humidity is low almost year around, so no mold or musty smells.

And finally, something we have learned in 6 years on the road: It is seldom the places, vistas, restaurants or attractions that make memories — it is almost always the people we meet and their stories, friendships and hospitality that enrich our lives.  This happened again during our bus exploration and viewing party…  The Owner is a really nice guy — and fascinating to talk to!   Someone we’d want to meet and spend time with, outside of any transaction.  Jim turns out to be a surgeon,  a Blues Harp Player and grew up in Chicago!  His father (who actually owned The Bus, though Jim DID pick it up at the factory!) was a Tuskegee Airman.  His grandmother was the first Black Woman to graduate from University of NM,;  the library on campus is named after her.  I could go on…

We had a chance to get to know each other a little bit…3 hours in the car to Las Cruces to get new batteries; margaritas and New Mexican food and even a couple fingers of Marilee’s 80 year old Scotch… She would certainly approve!  I hope the transaction is completed,  but the conversation was fun and WAY worthwhile anyway!

Back to The Bus…

Being “Not used” certainly reduced the wear  and tear — even the factory paint was immaculate and shiny!  But there were also undesirable  consequences; such as 7 completely dead batteries.    Jim decided he would spring for replacements and I agreed to install them (and hump them to and from the car x2 because I had to do the same with the cores). Even if WE did not ultimately buy The Bus,  Jim reckoned, the Engine was going to have to start for any prospective buyer.

We also found that the Hot Water system would not pressurize (though it did not leak, either).  There were some drips attributable to “crud” in check valves,  and there is a very old water pump with really old rubber diaphragms  (which Our Bus also had and which failed almost as soon as we hit the road, so was replaced almost immediately).  Some or all of that is going to need work,  which I have done on RV WHERE YET, and I can do on The Bus.  Not that I WANT to redo a water system again,  but I CAN DO at very low cost.   Most important: There were NO broken pipes or leaks which might result from freezing,  and would be VERY DIFFICULT and VERY EXPENSIVE to repair.

Some other things were unfortunately found not to be working.

In other words,  some stuff that needs to work does not work,  but these items CAN be repaired — maybe by me,  maybe by others (at a cost that might should affect the purchase price).

Perhaps the most important factor affecting our decision not yet made:  We could NOT take The Bus on a road test.  Since it hasn’t been out of the garage in 15 years,  the driveway is absolutely overgrown by Mesquite Bushes.  NO POSSIBLE WAY to get The Bus out of the garage!

This means we have NO IDEA if the Transmission works or the Turbocharger makes boost.  Frankly, if there are problems with either of those things,  we would not purchase The Bus!  Someone will,  and these things can be fixed if you have time and money…and The Bus could still be a great find for the right person with said time and money.  But it would be our home,  and we cannot have these issues that prevent living and traveling in it.

We have no reason to think there WOULD be an issue with either of these…however we need to take at least a short road test to make sure.

A VERY short road test,  because the tires are 30 years old!

Unfortunately,  Jim has not quite retired yet,  so needed to be back at work after only a couple days.   No time to clear the driveway of bushes to complete our evaluation, even though the Owner said our Jeep and a tow strap would easily pull them out.  He also said there are LOTS of Brown Recluse (poisonous) Spiders, so we didn’t really feel like sticking our hands in the bushes.   We made the best use of 2 days,  but we all realized we needed to come back to finish and consummate the deal.

The soonest Jim could return was November,  so we put it in the book!  Still working on logistics of where we would park both buses…The Bus to make immediate repairs and changes,  and Our Bus to Sell. Assuming,  of course,  “The Deal” is consummated.

“The Deal” is not yet exactly quantified…we discussed some numbers which are truly not far apart.  Jim knows those numbers have to be affected by the Generator and Leveling issues.  We know that the bus is a rare find and has a value defined at least in part by it’s rareness, and by it’s sentimental value to Jim.

There… I have presented both sides of the negotiation!

We left our time together pretty certain — perhaps it’s just the Scotch talking — we could figure out a deal that worked for all; assuming the test drive went well.  We agreed to sleep on it for a couple days,  then get back in touch.

What we KNOW we need to do after “The Deal” is transacted and before we can actually hit the road in The Bus:

Those were all expected stuff.  We will also need to:

All of that will take some time — weeks,  not days;  hence the need to sort out the parking logistics.  That gets us functional enough to SELL RV WHERE YET, and then resume our travels .  Then, over the next several months,  and while on the road,  we would continue to make improvements that we have already mostly made in RV WHERE YET, such as LED lighting throughout, Replacement ceiling vents/fans, fixing the Leveling System, replacing Carpet with Vinyl flooring, etc.

Now for some pics!!  You can click on a Picture to expand it…then scroll between them with the arrows on the screen.  Enjoy!!!

Outside Pics (The Garage is tight,  so could not really get good exterior shots) 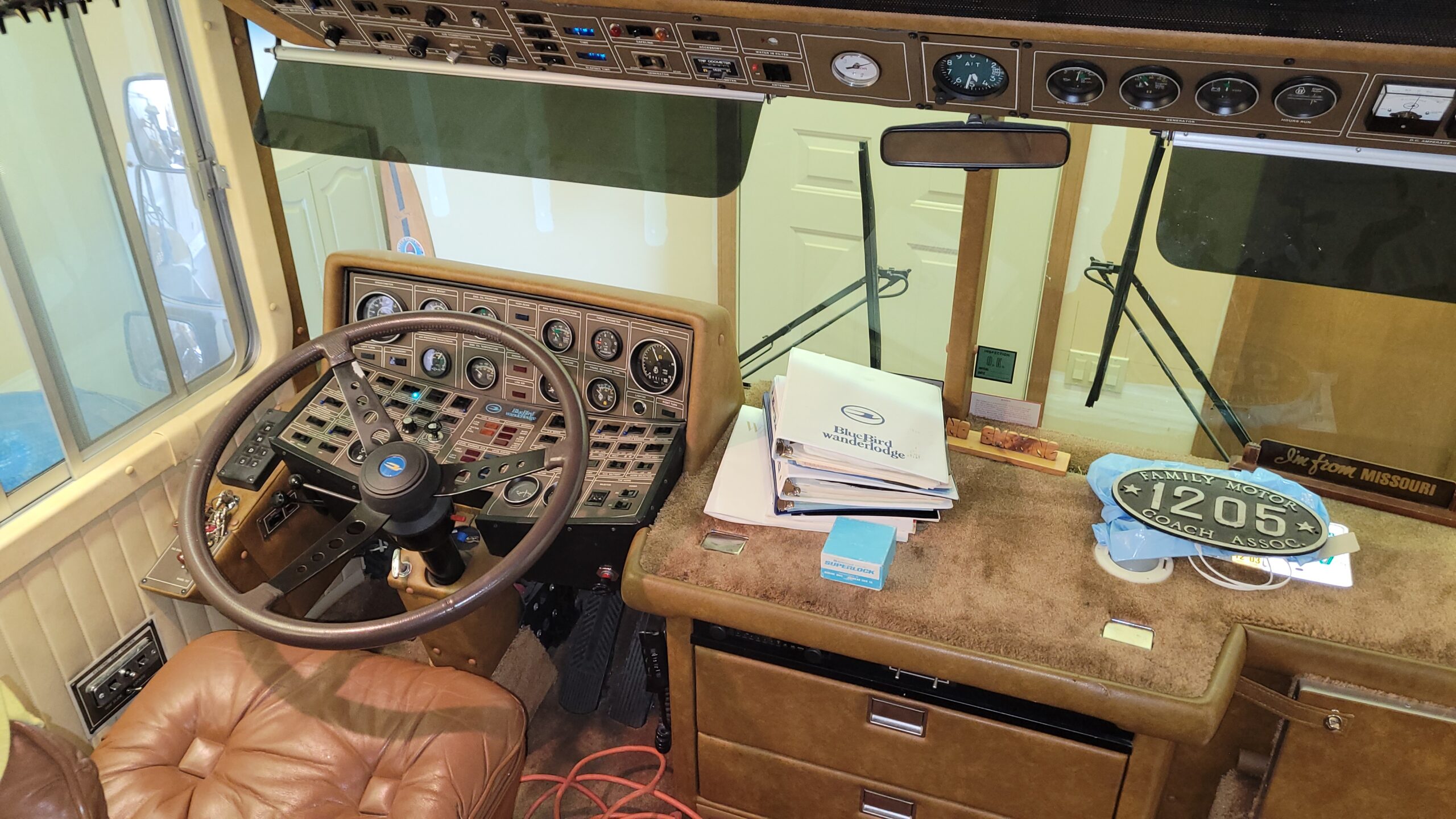 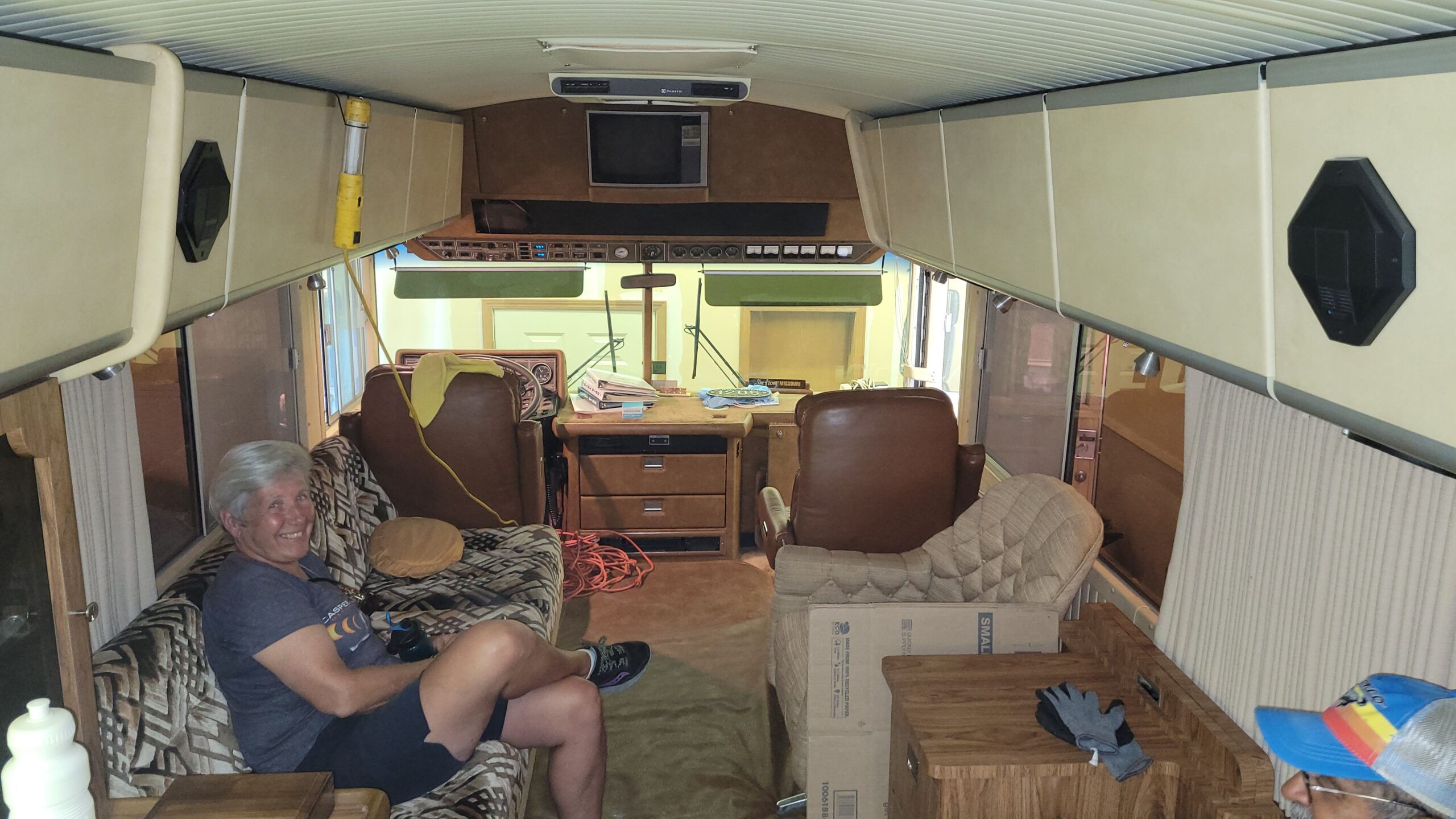 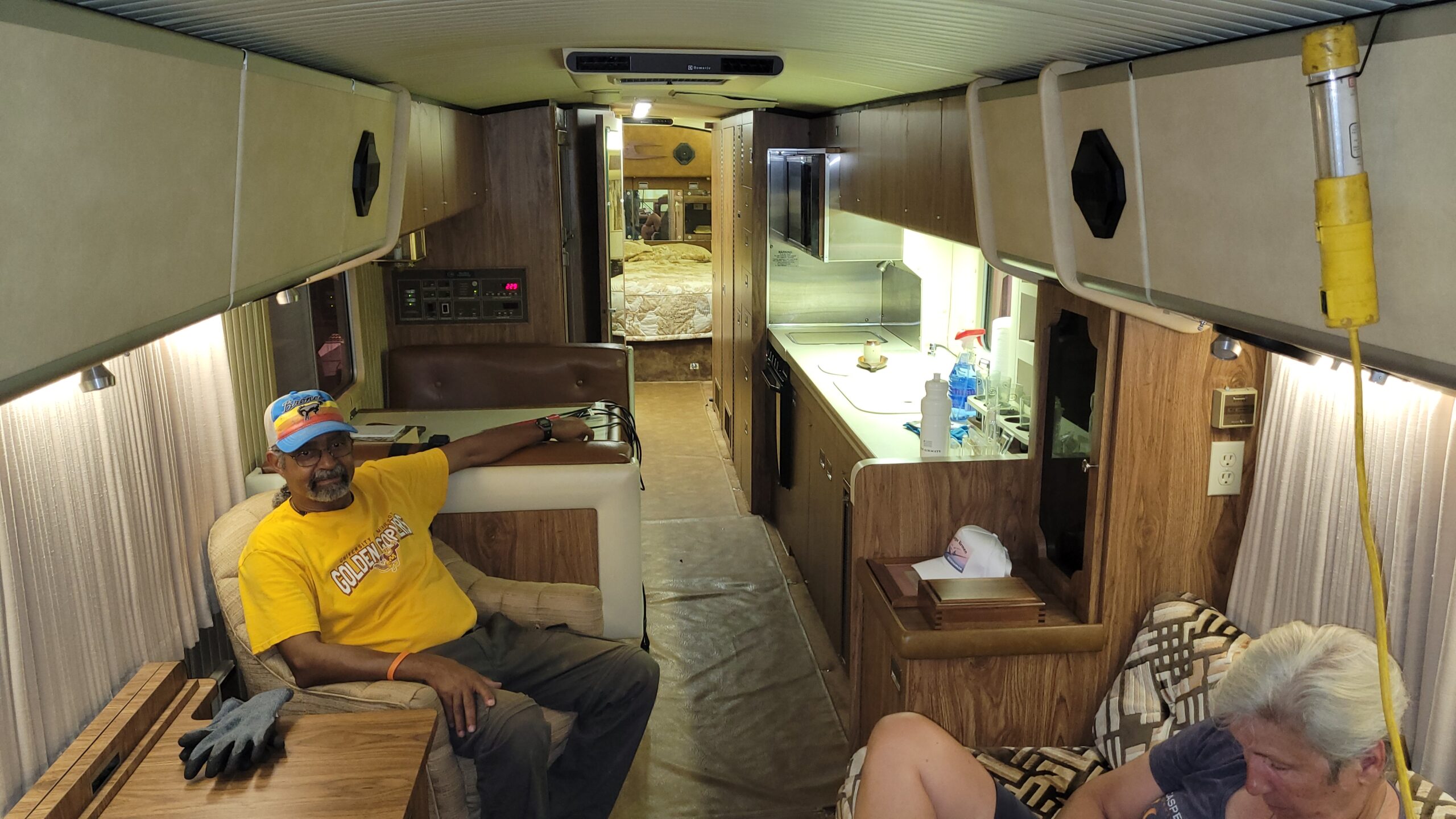 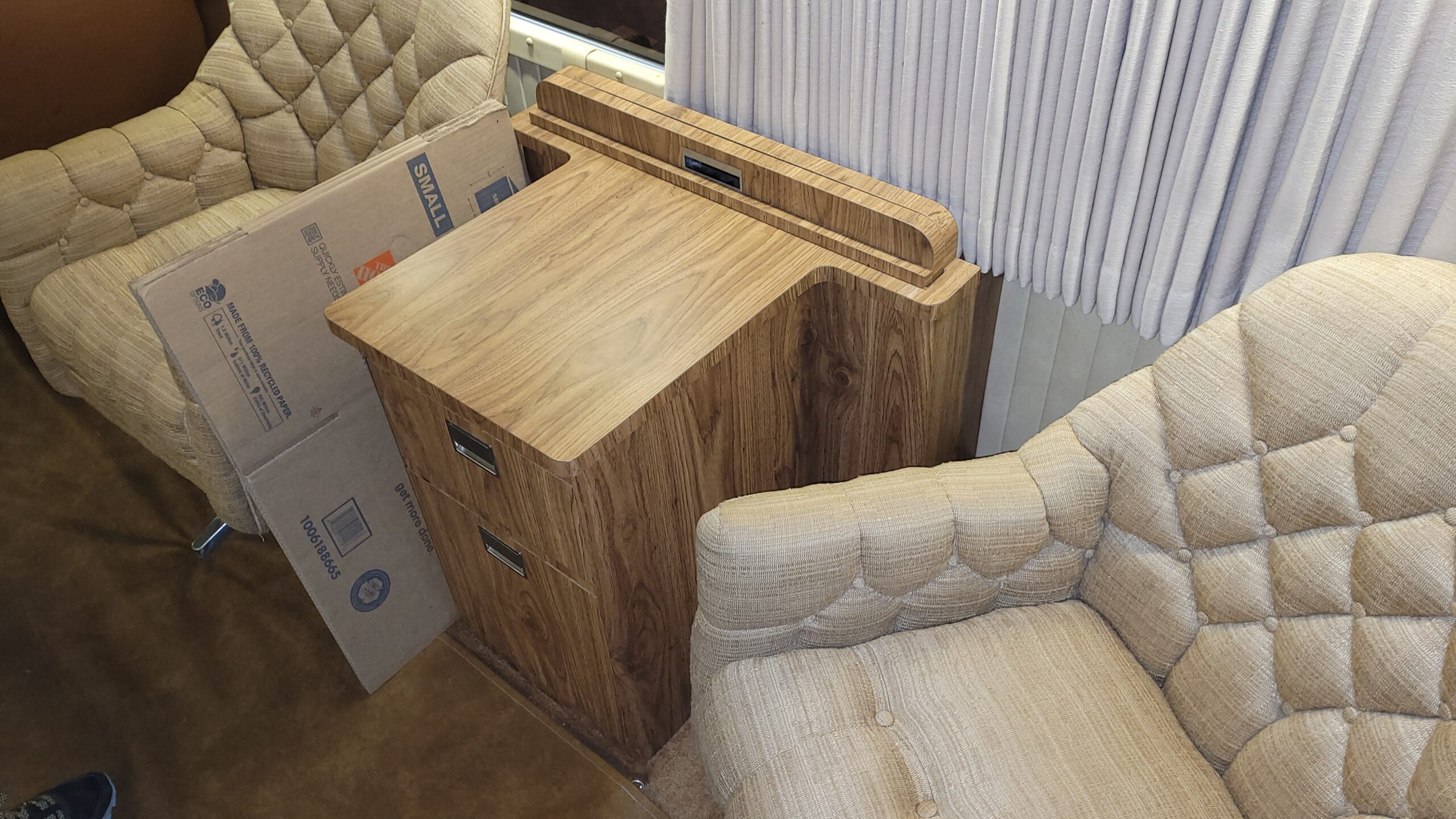 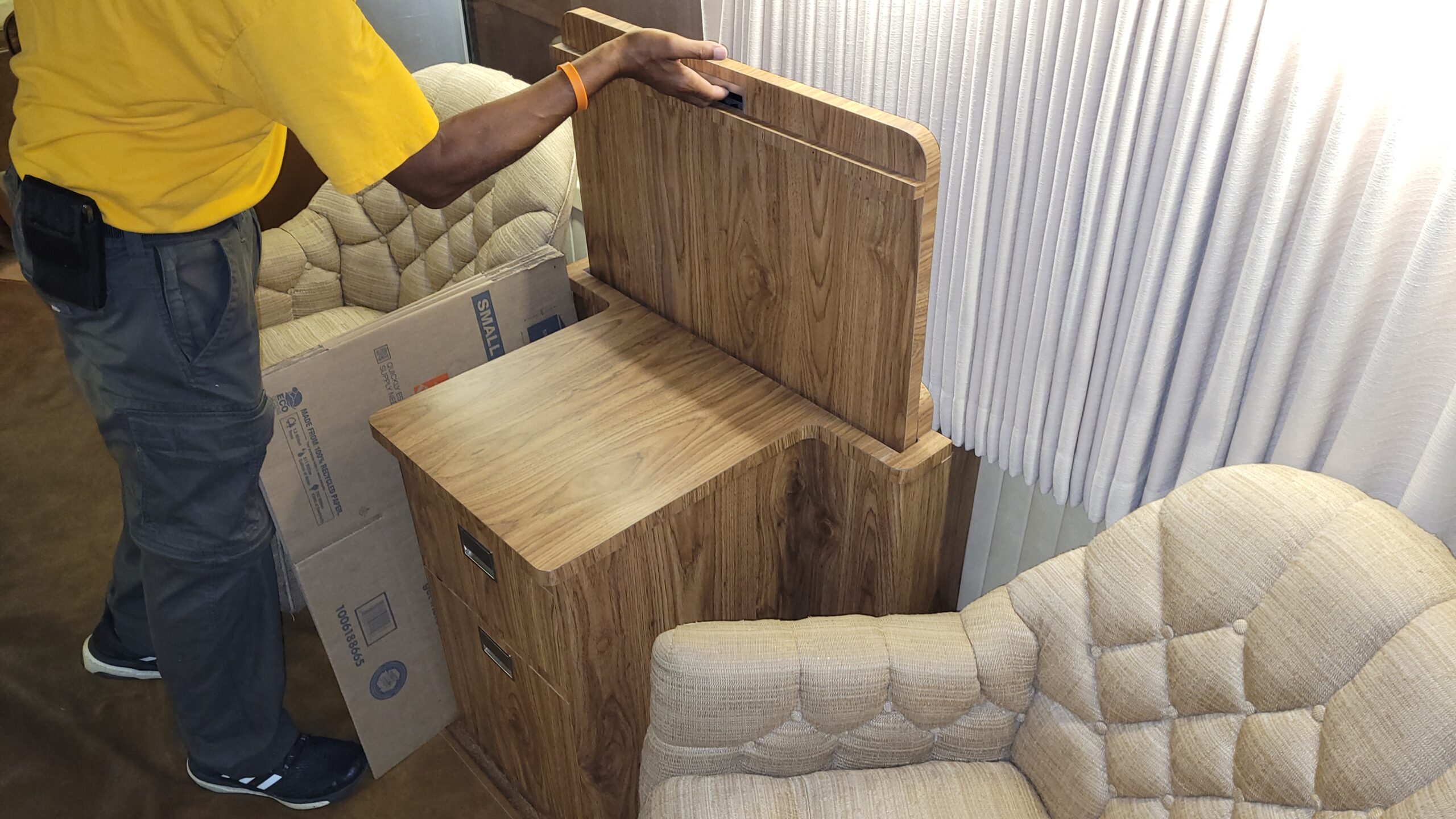 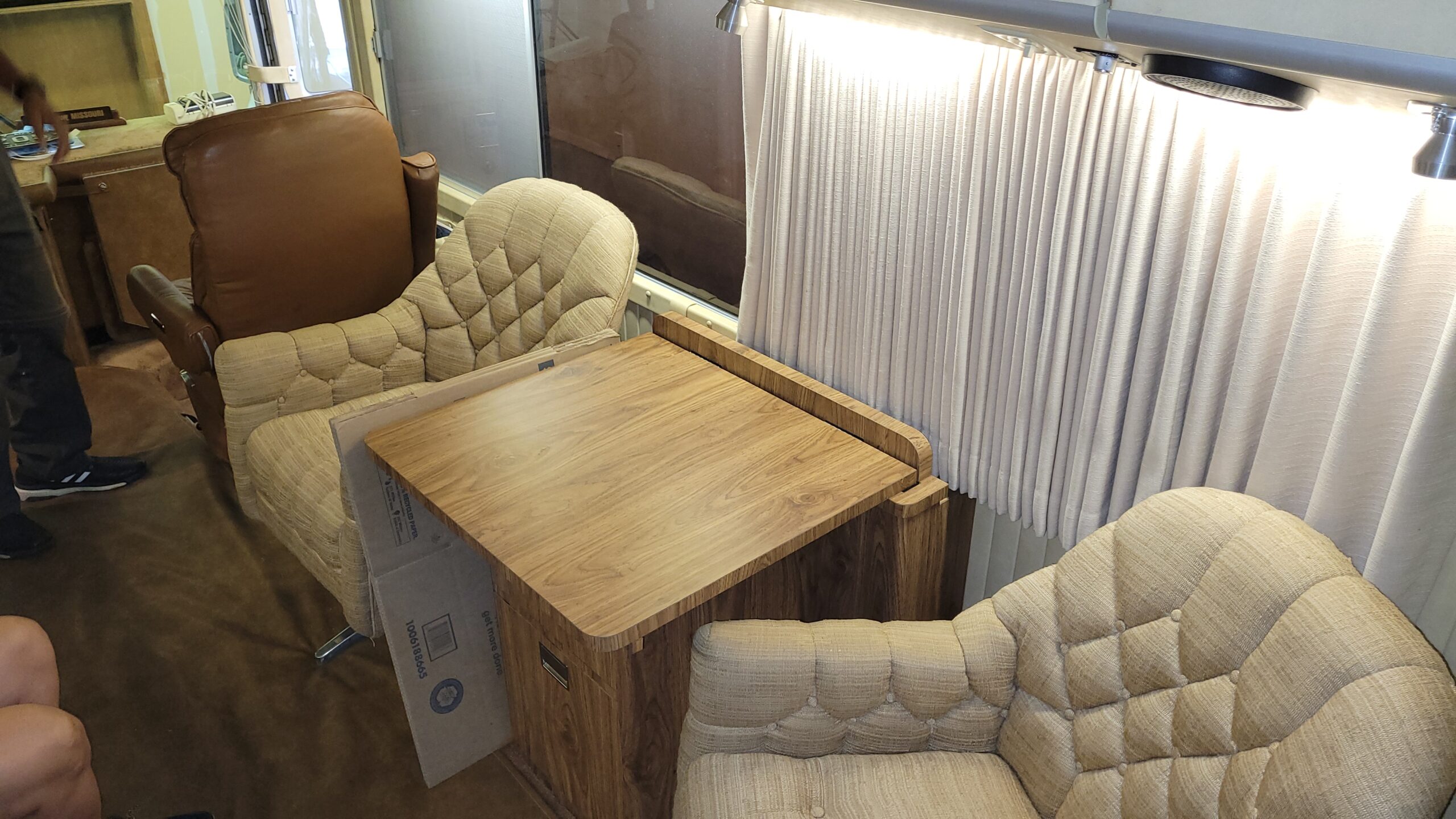 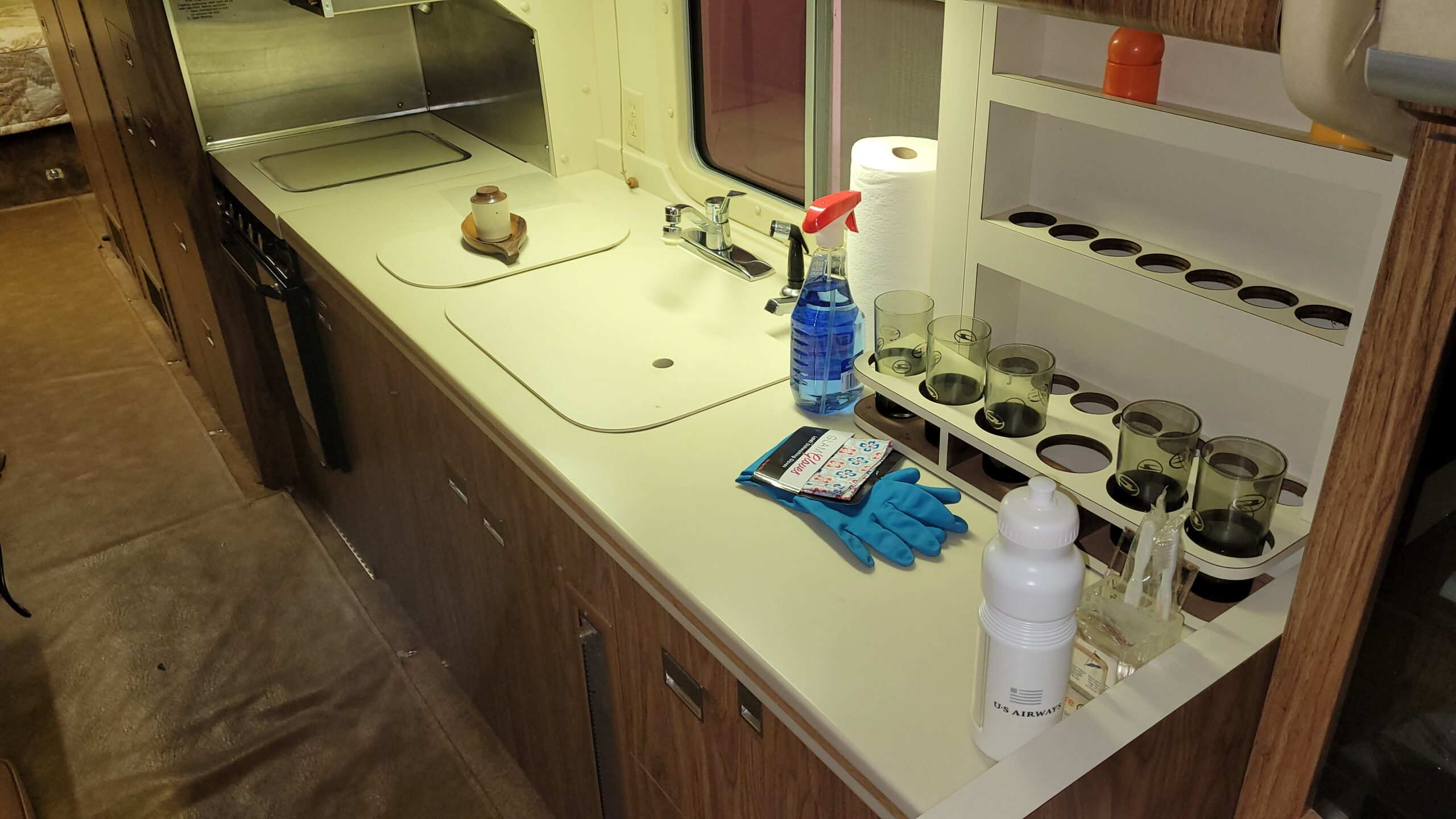 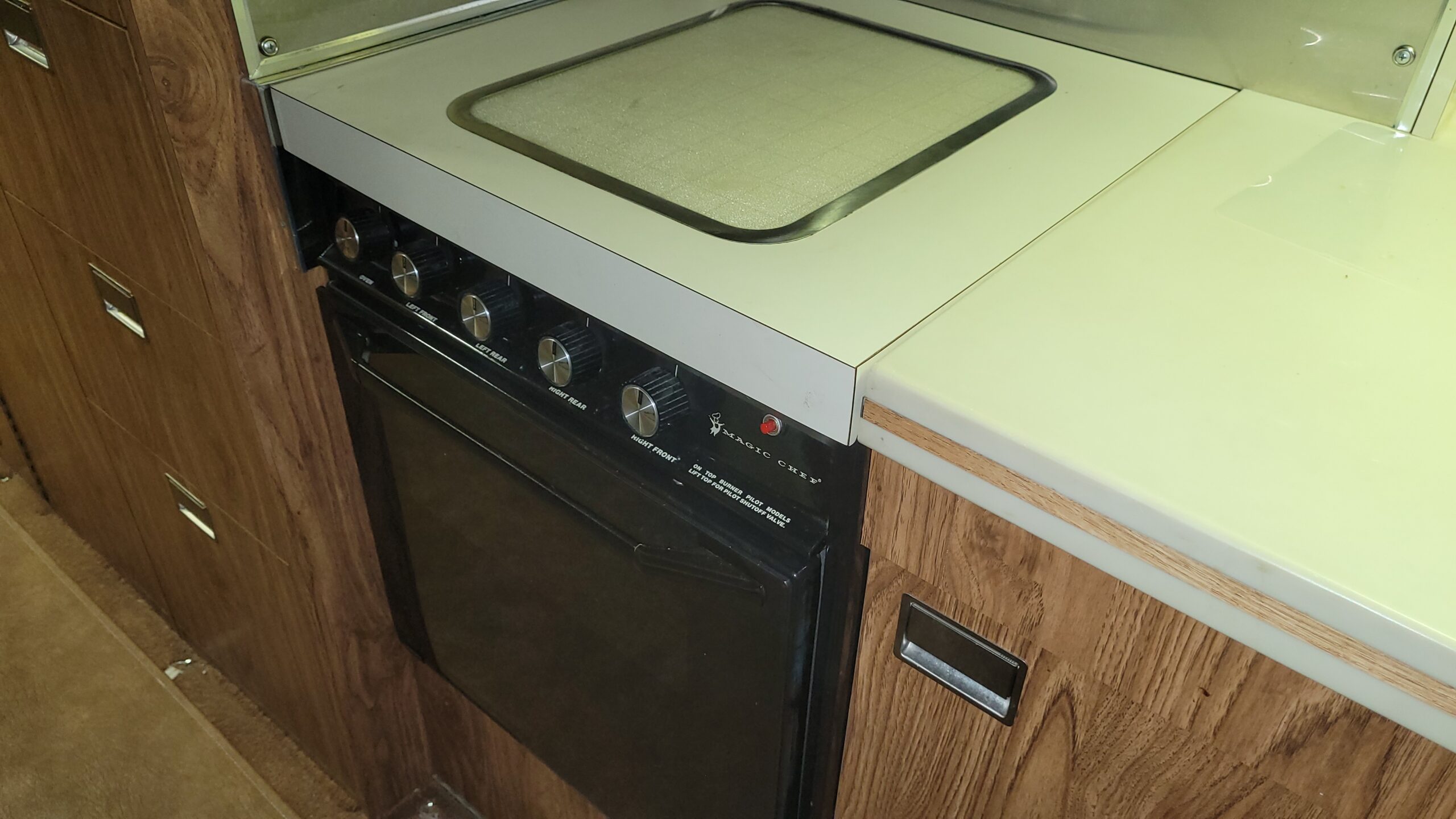 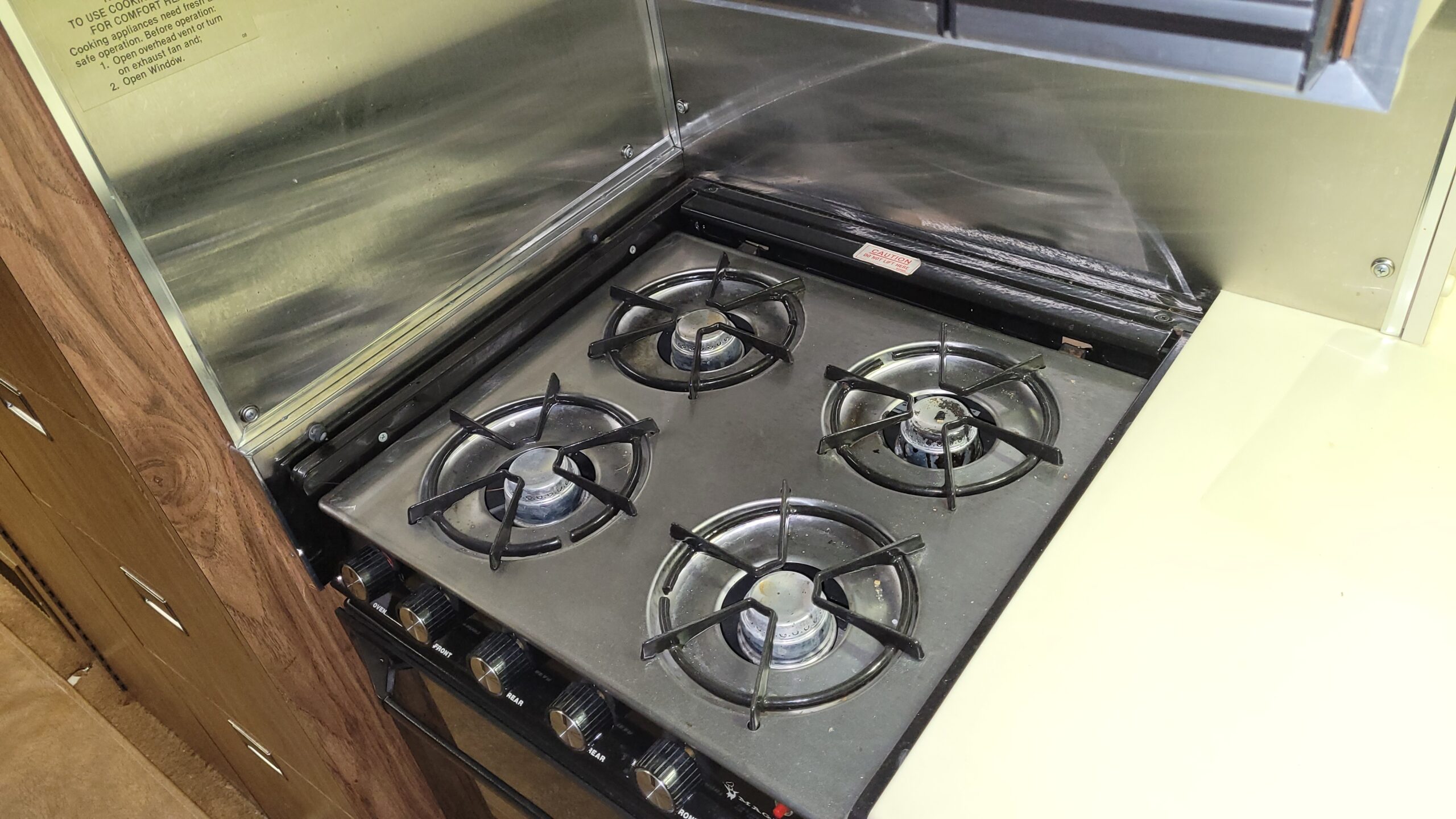 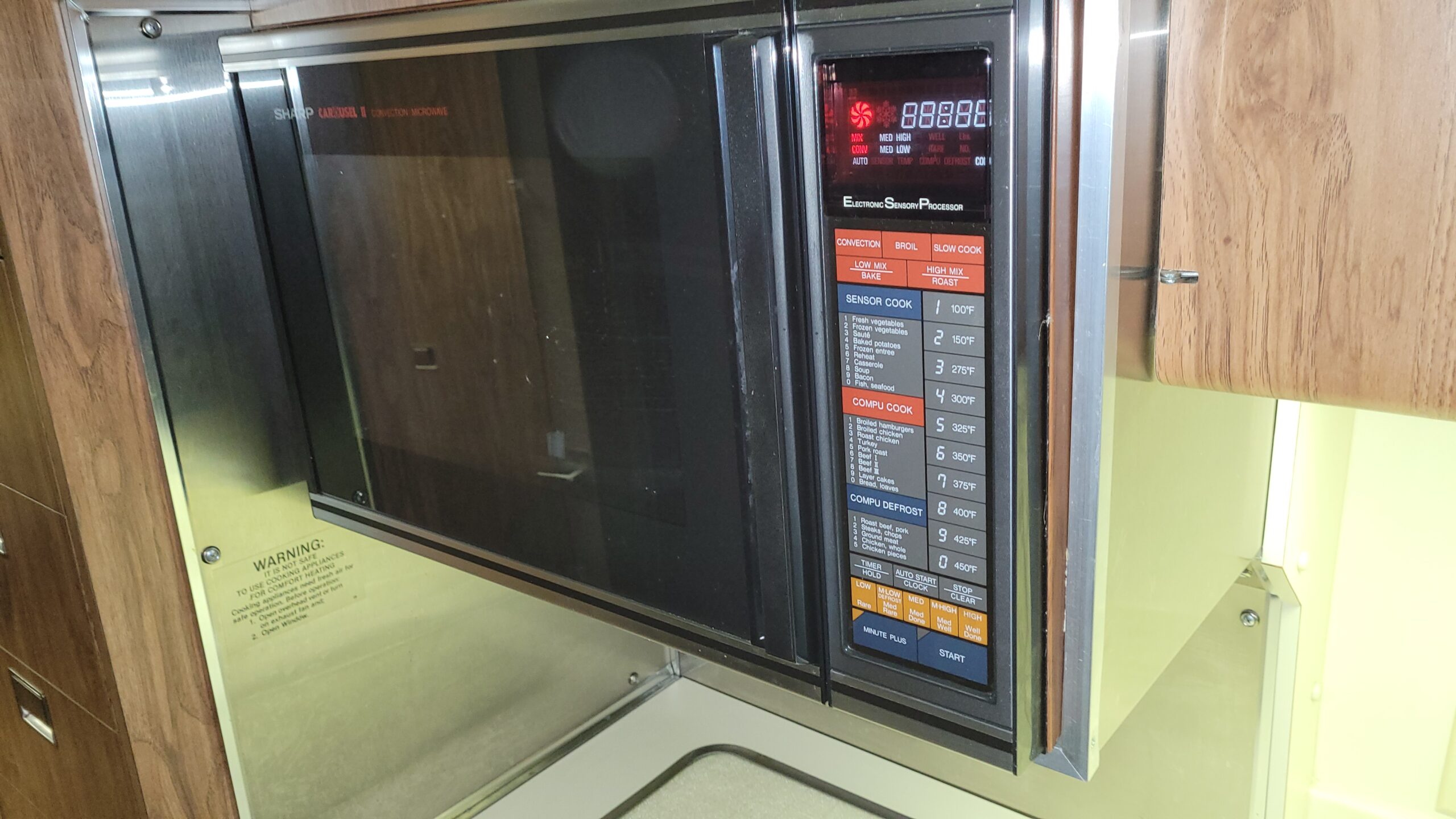 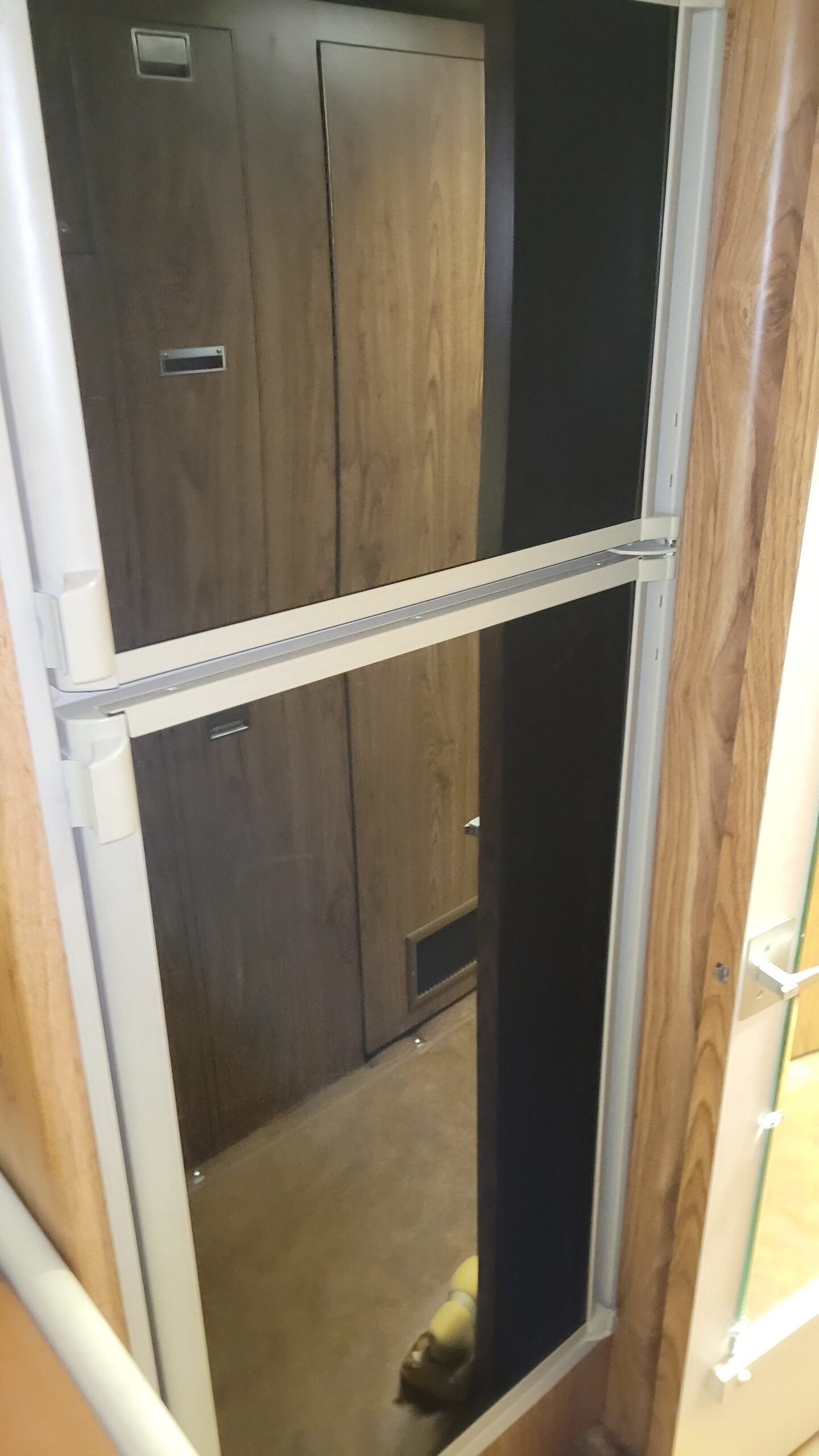 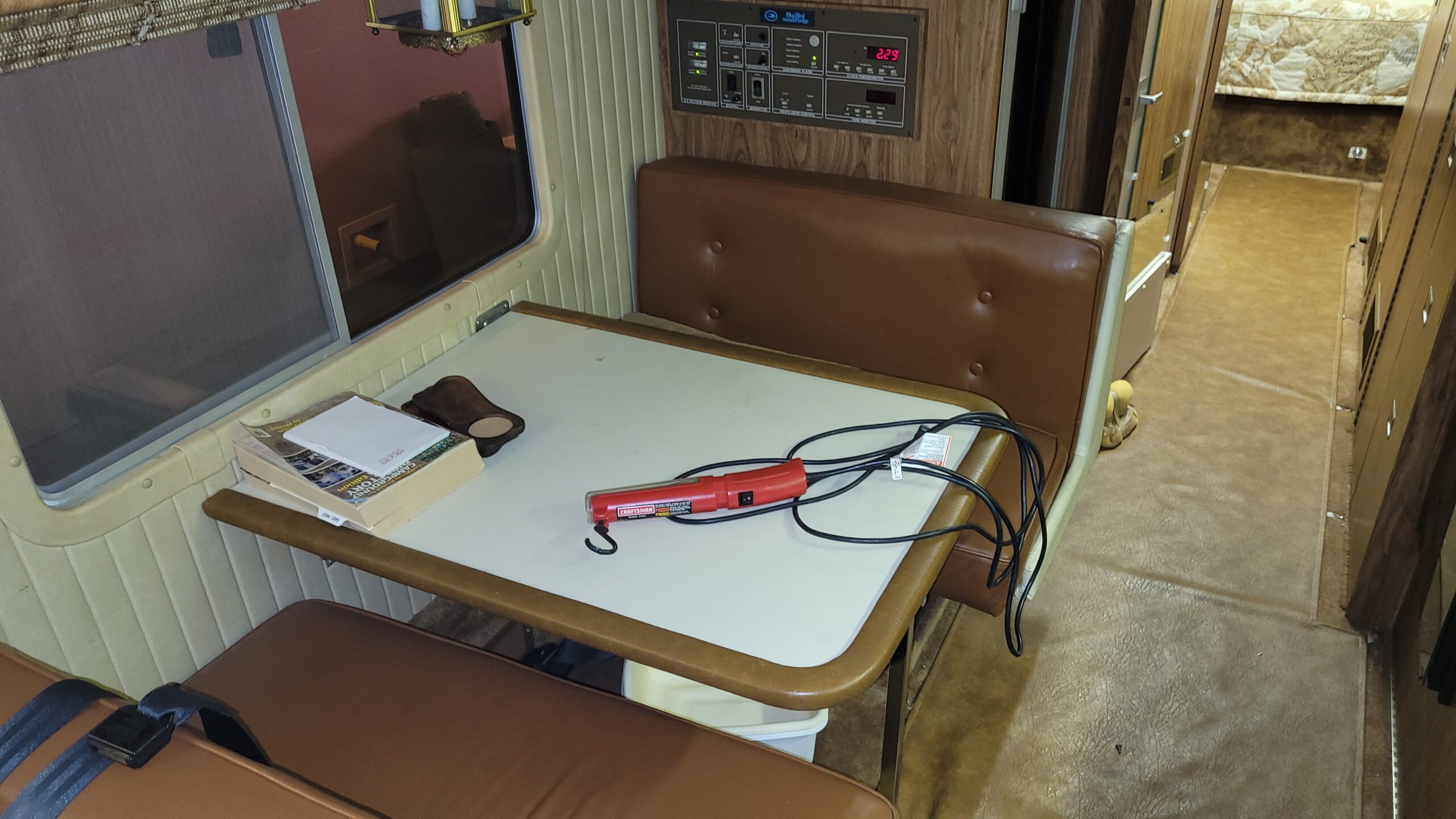 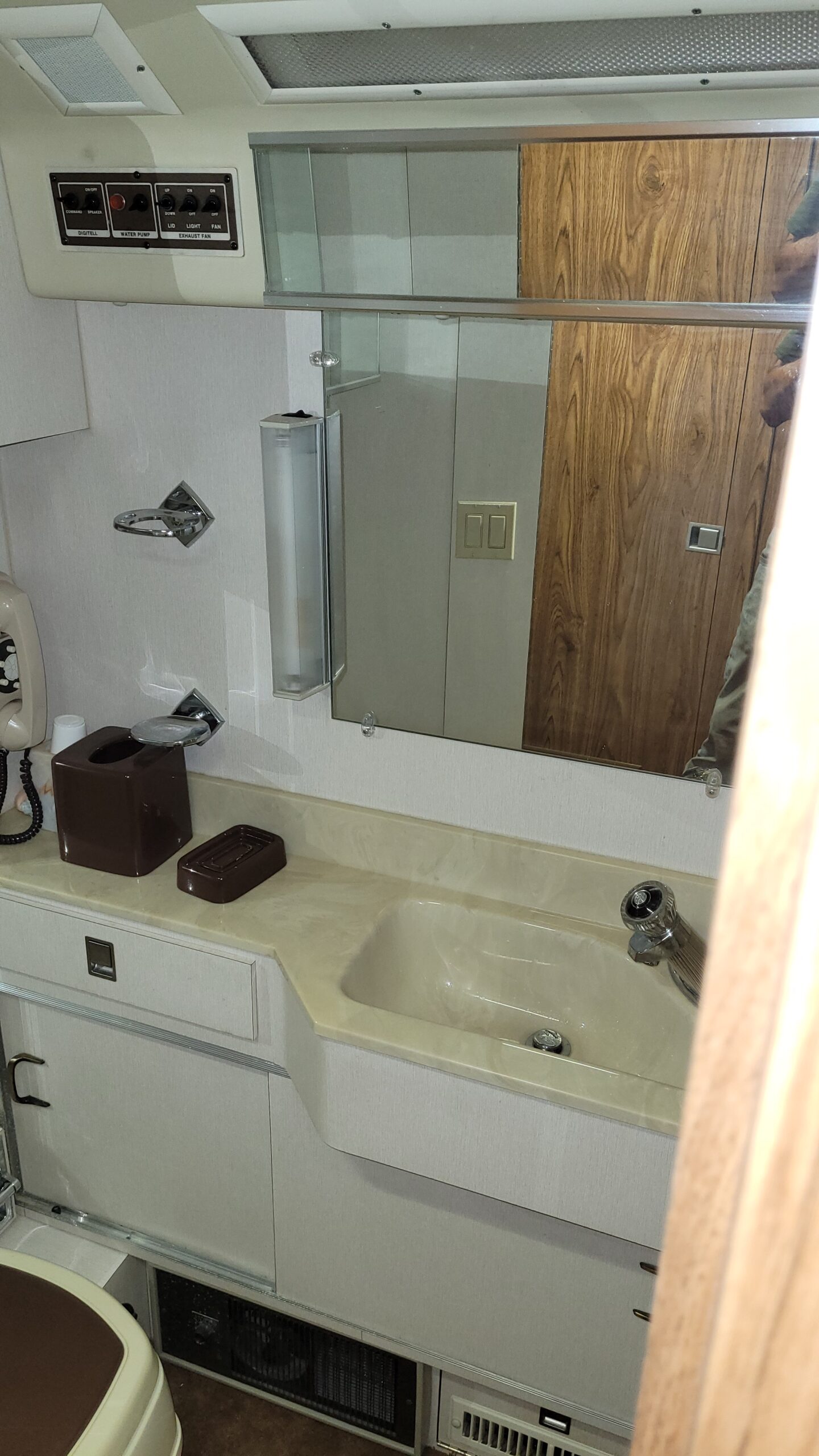 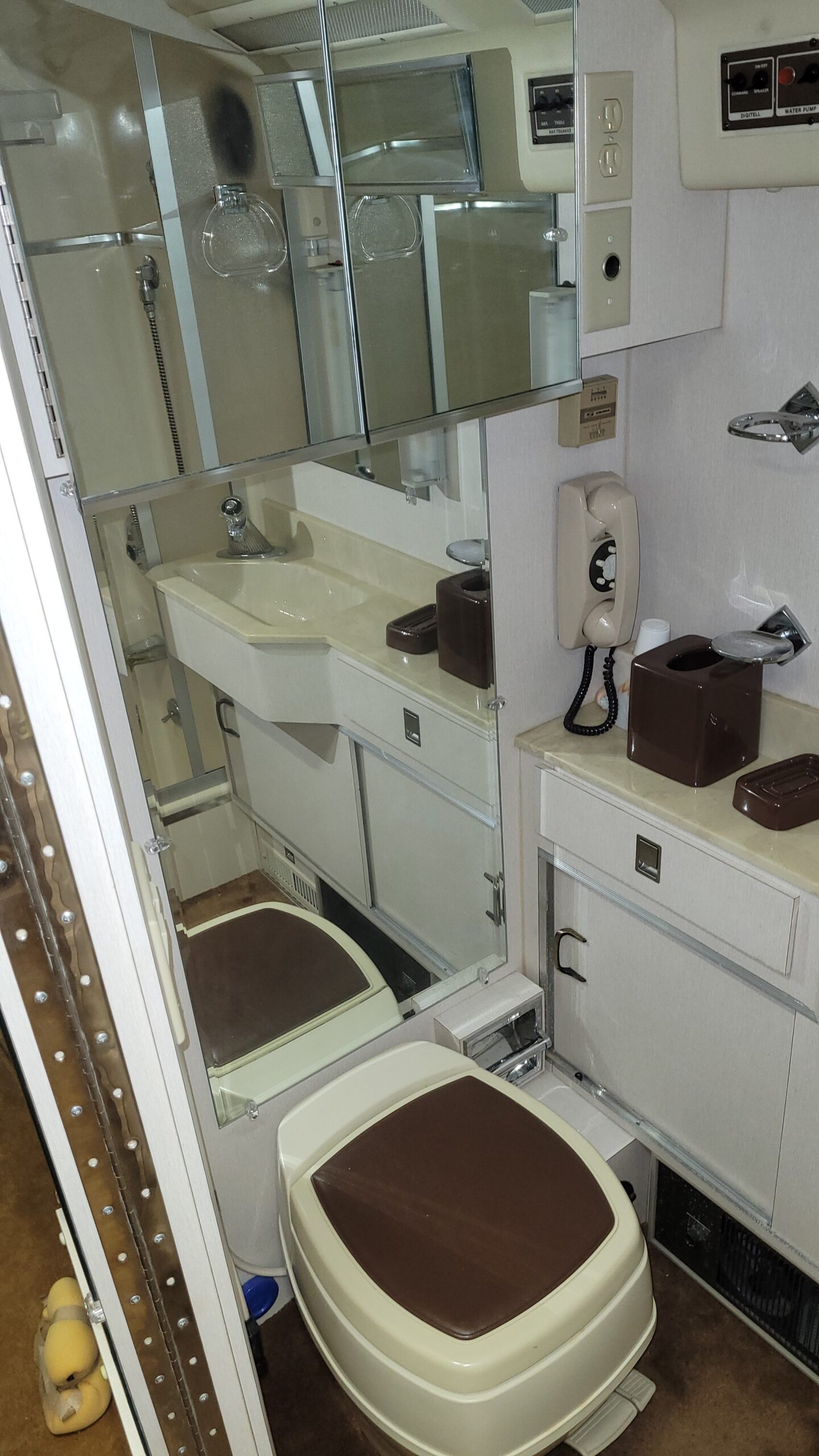 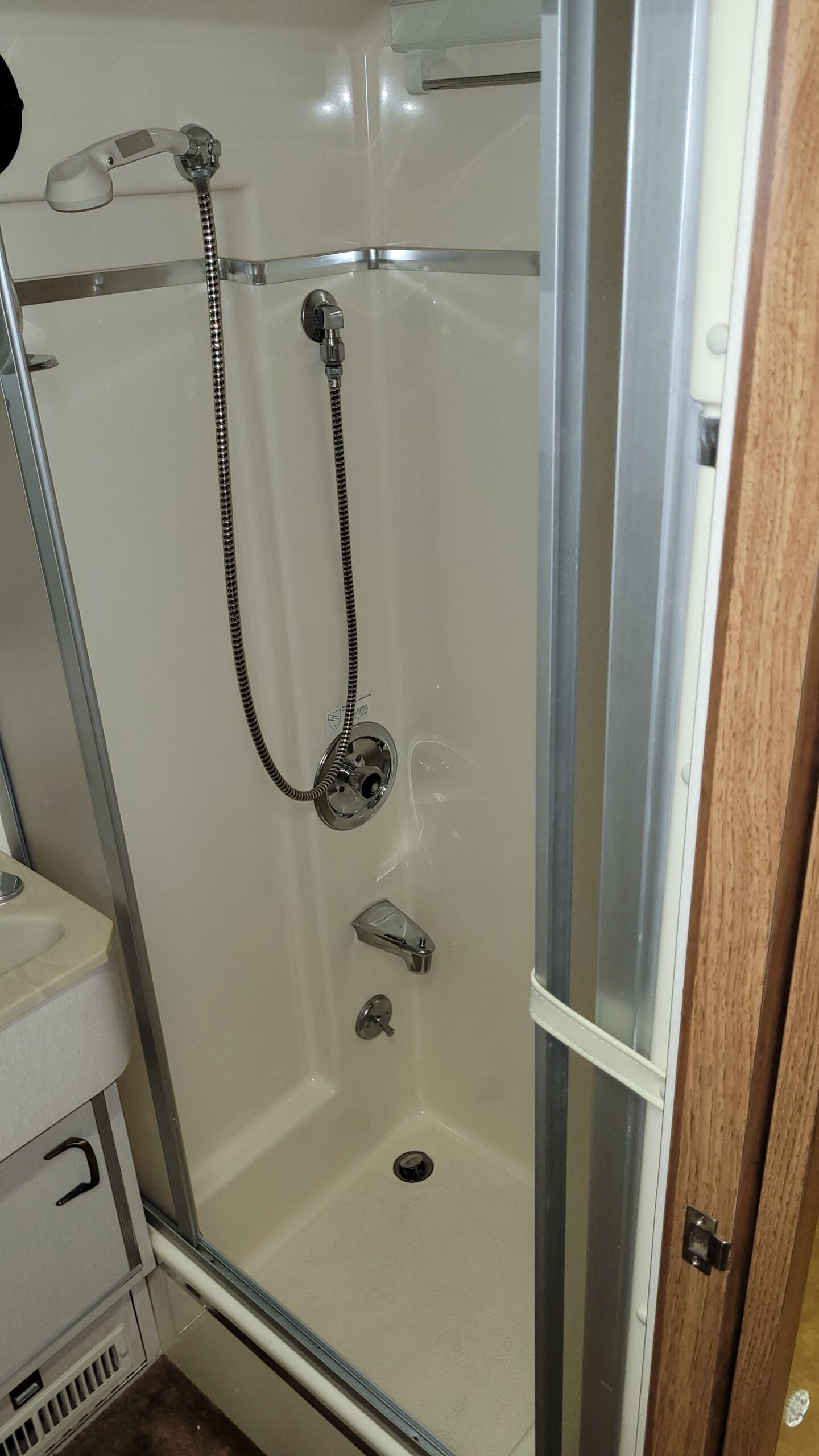 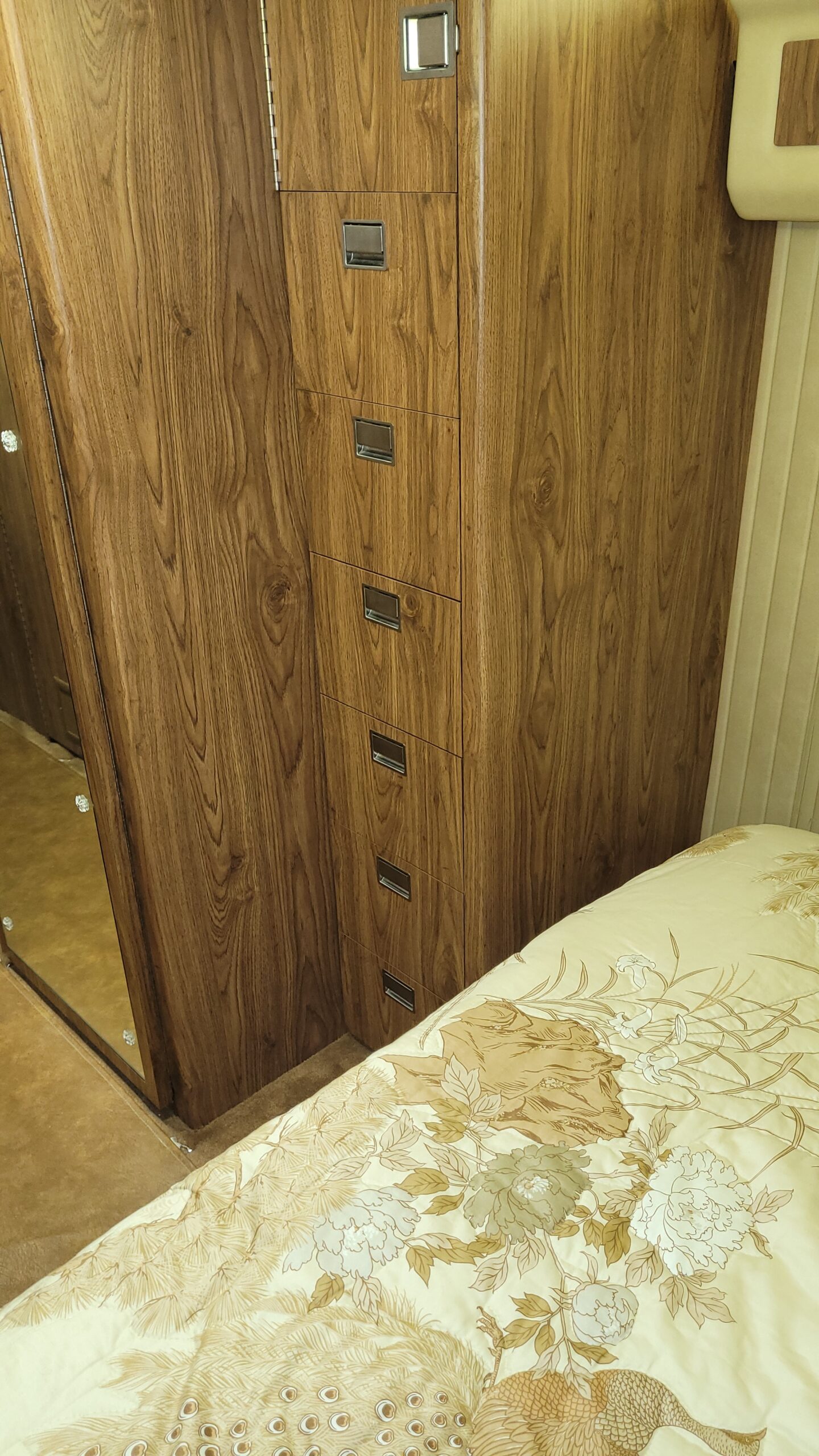 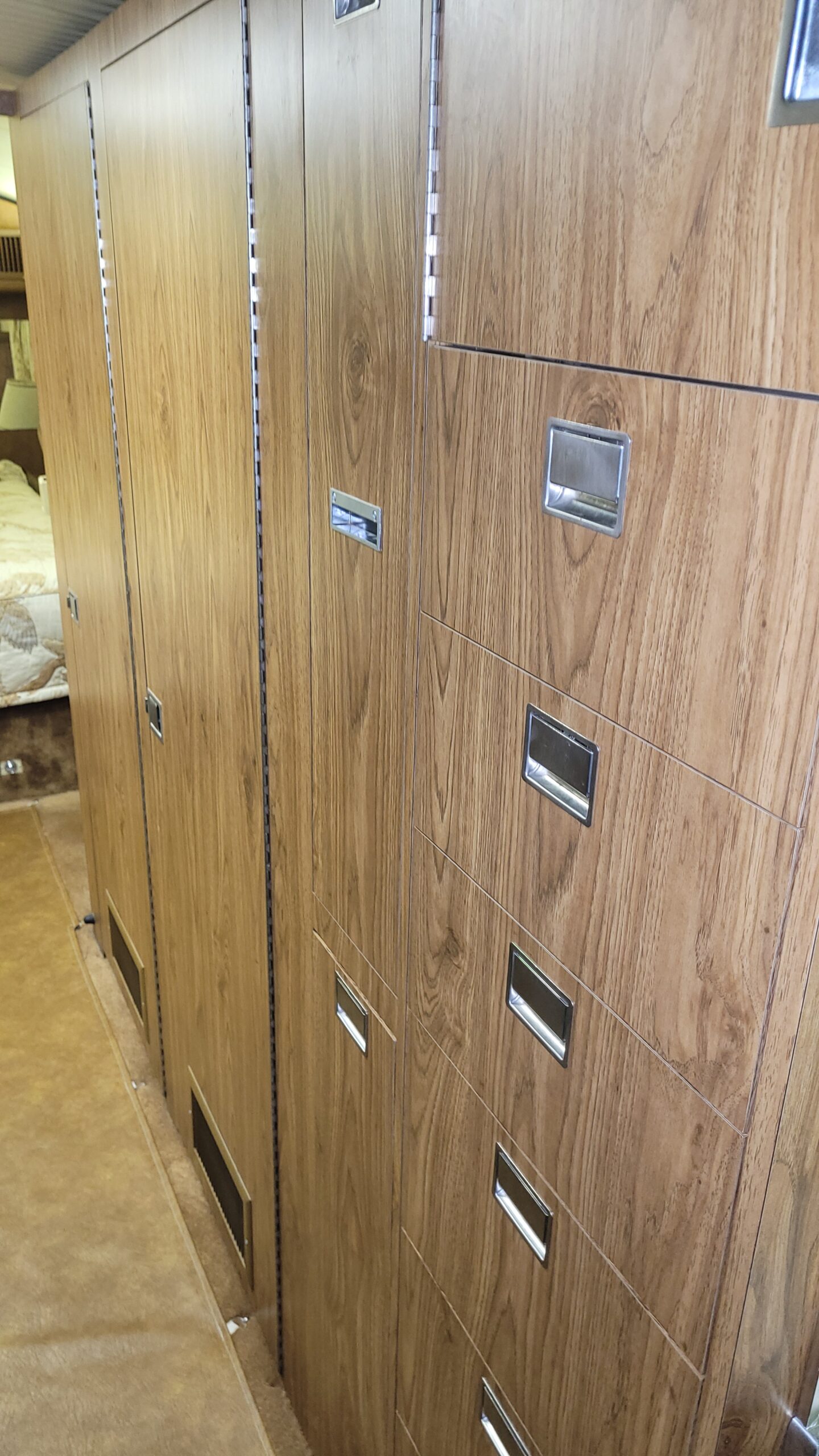 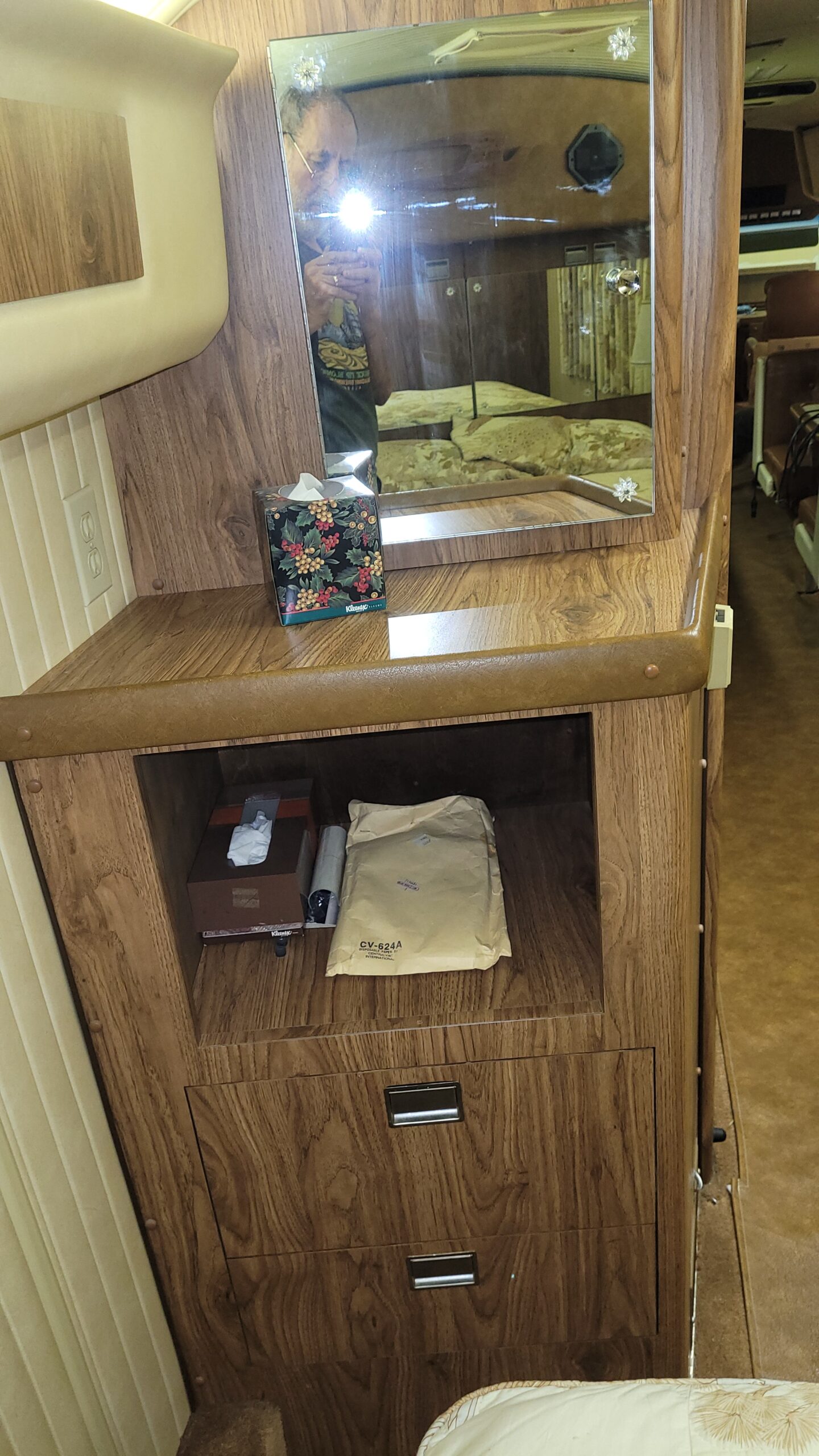 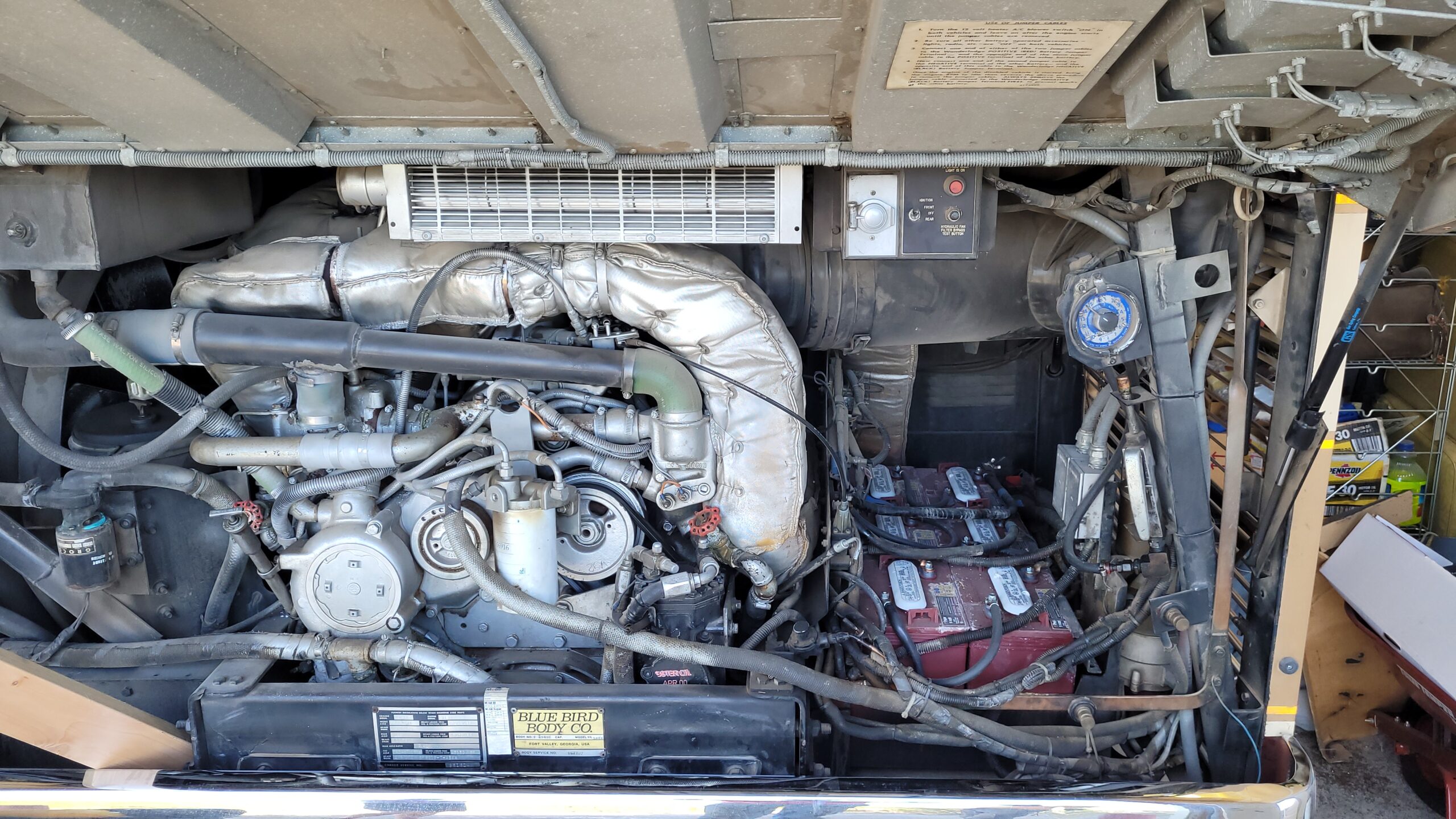 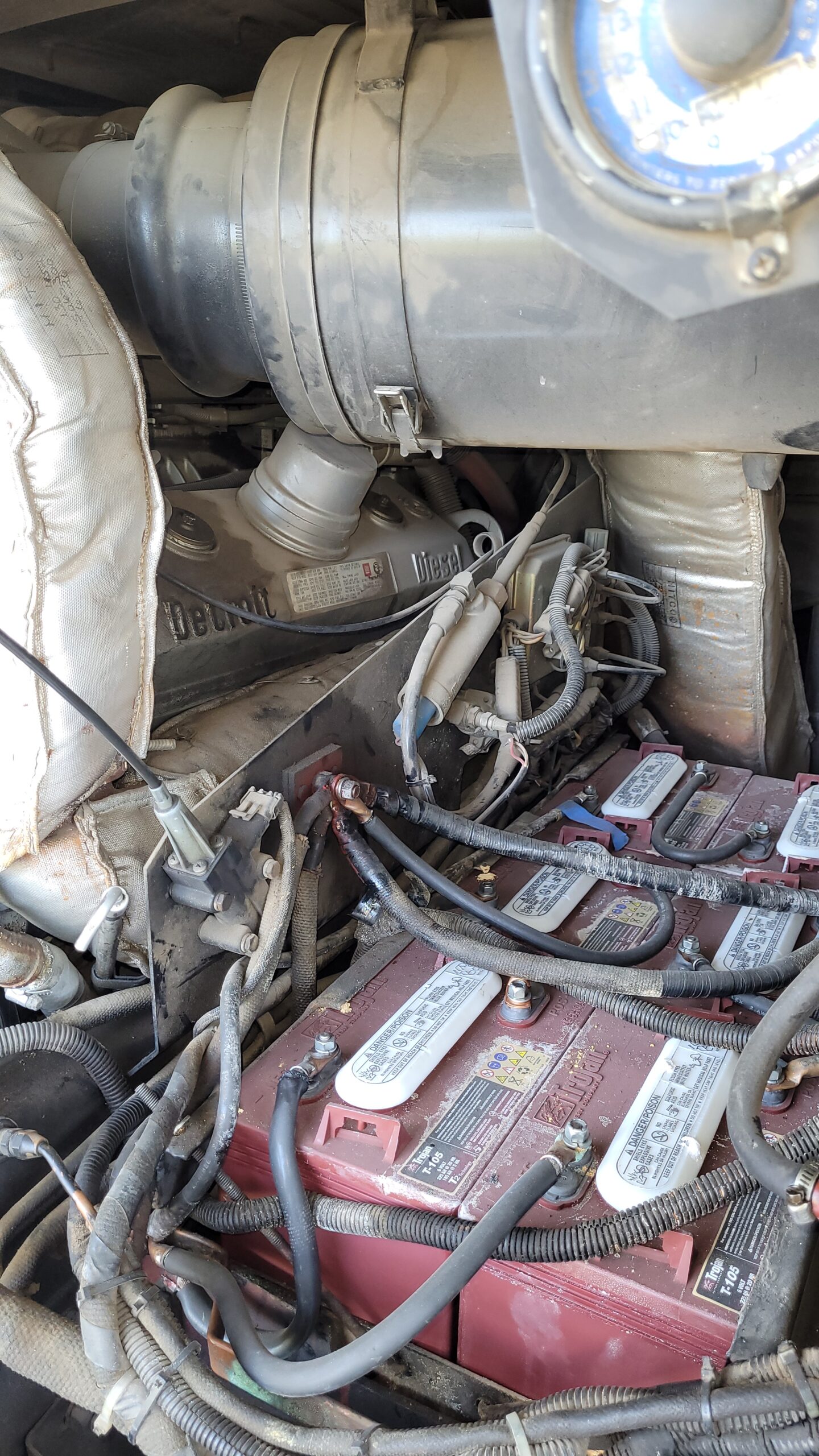 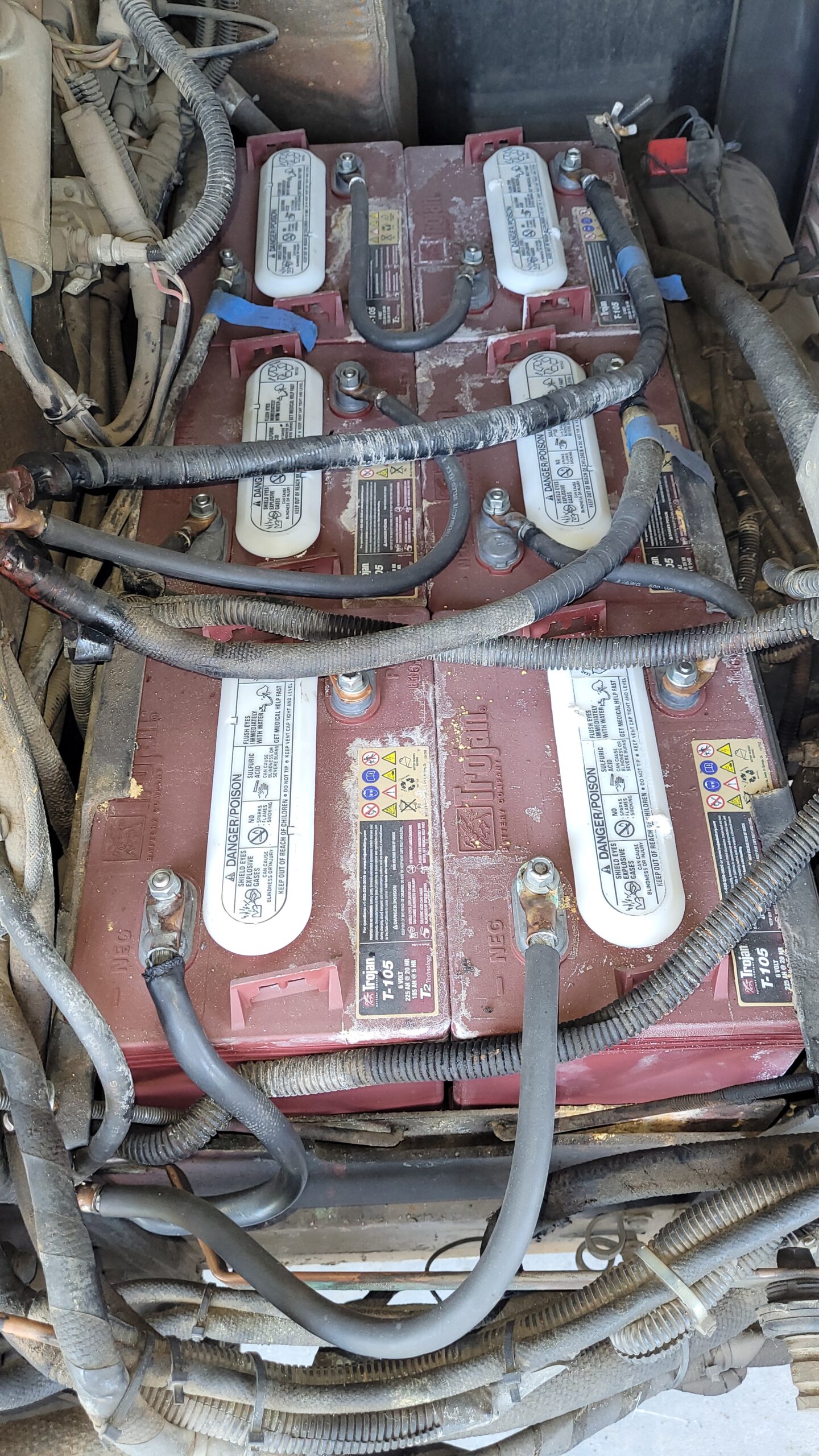 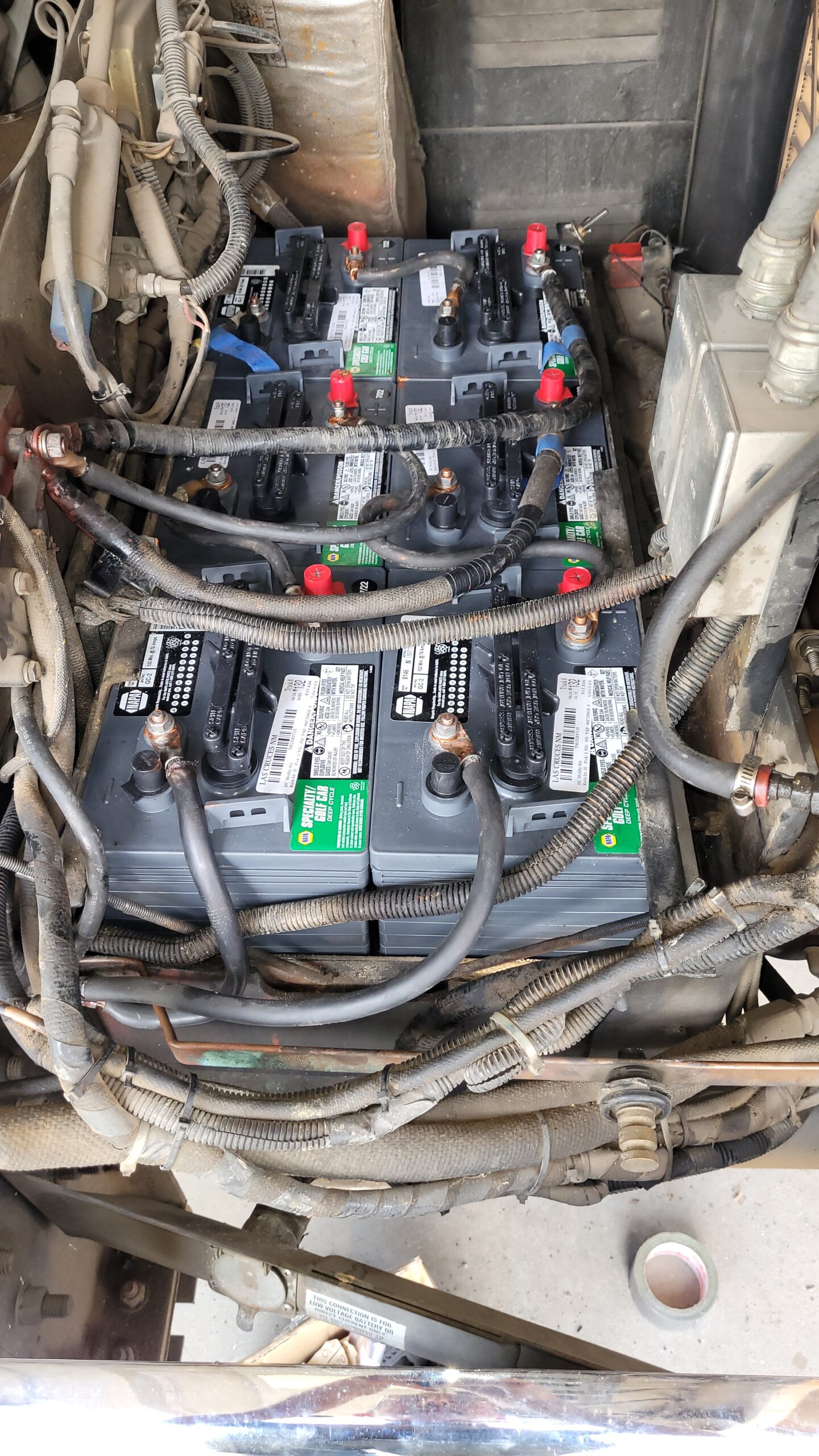 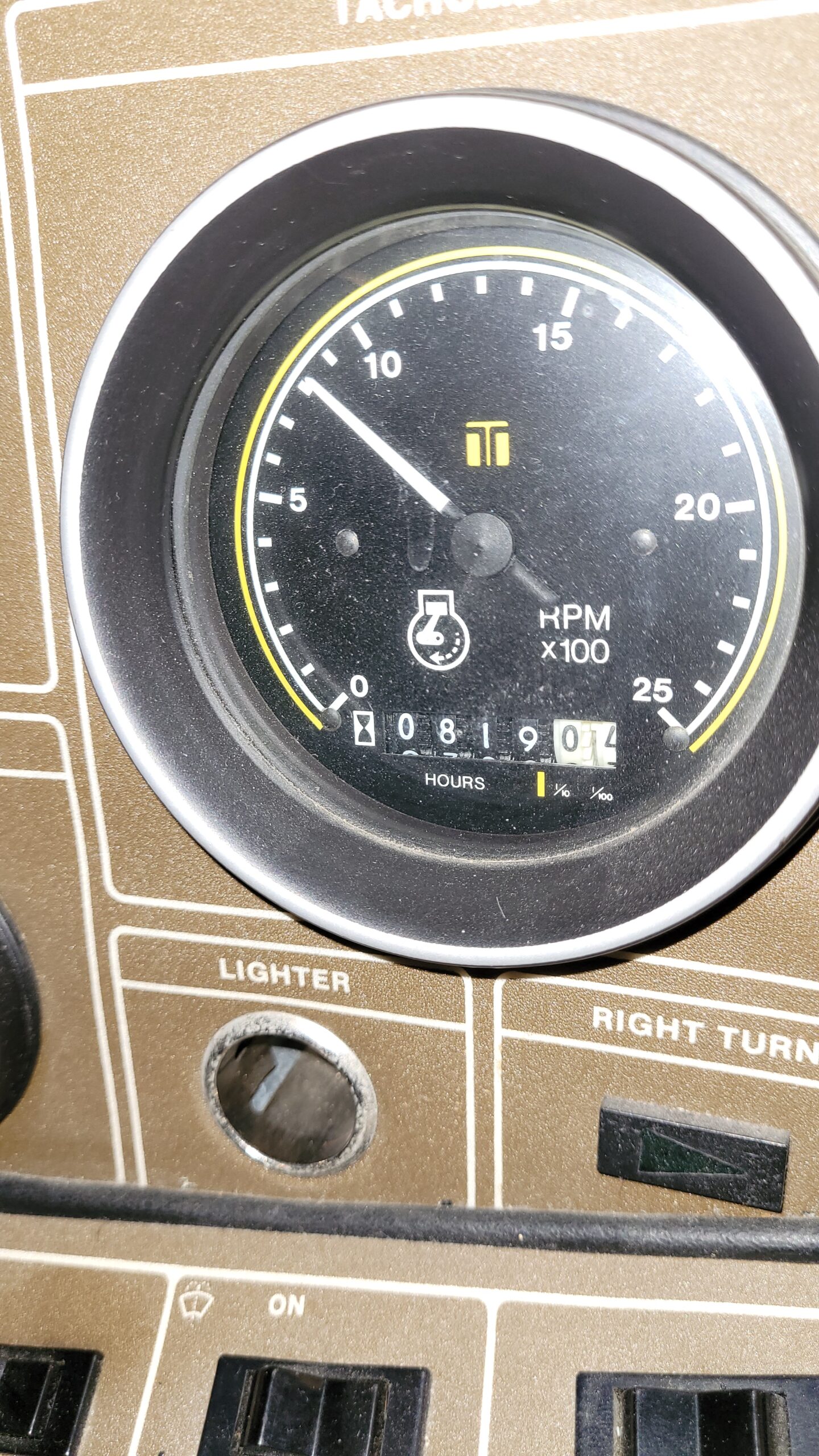 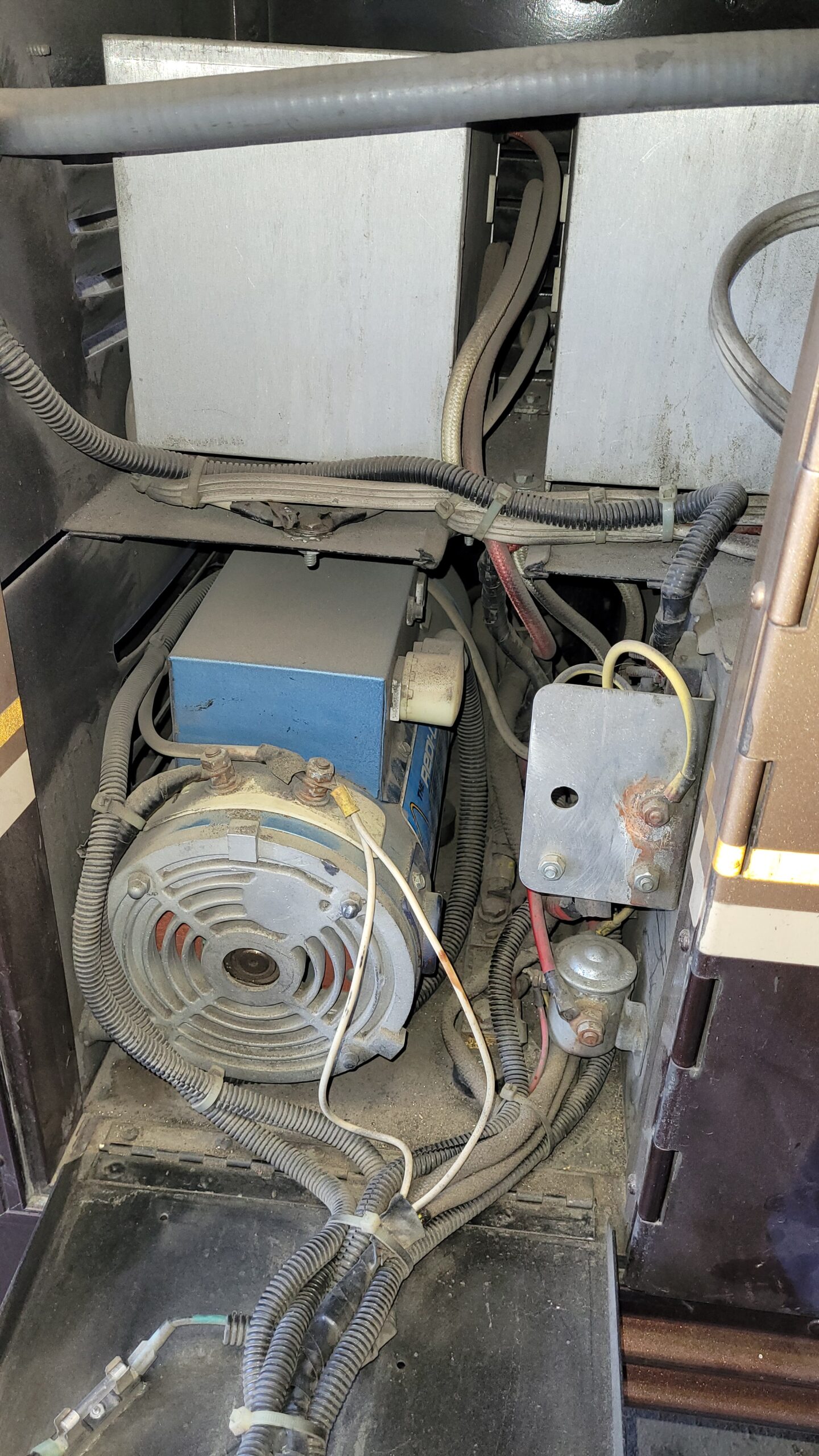 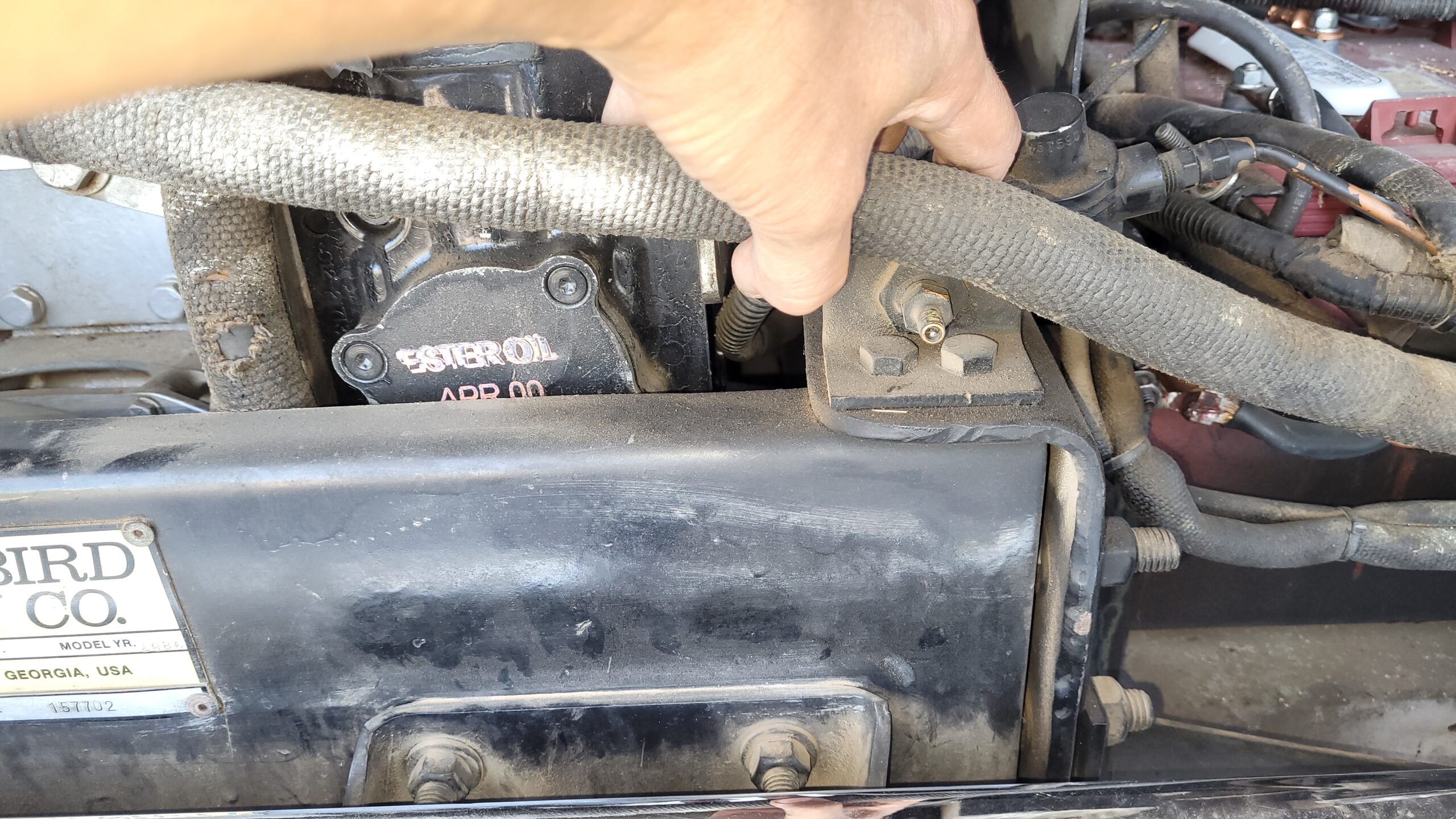 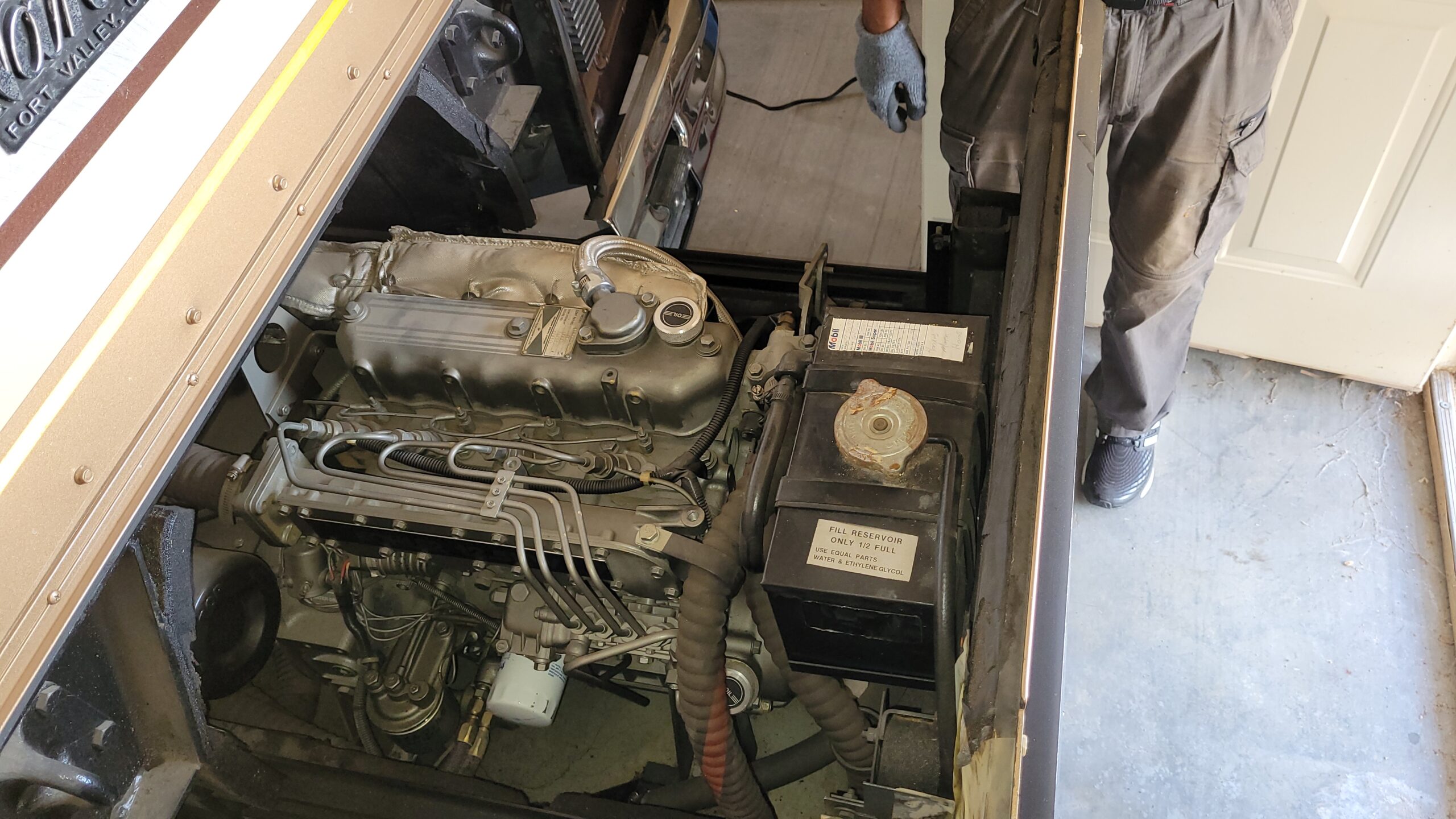 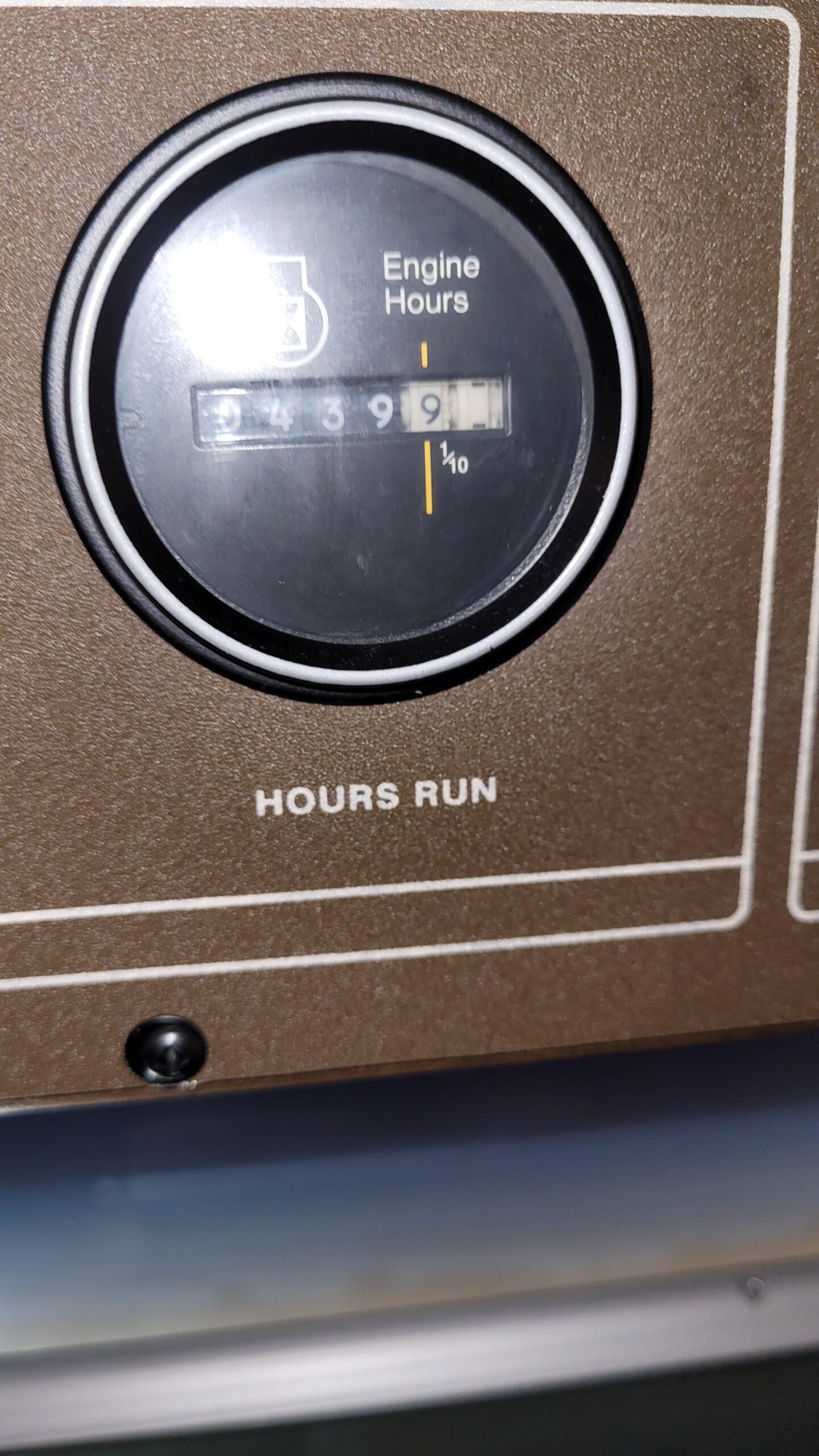 12 thoughts on “A New Home for the Houseless?”

← Moving Slowly Towards Destiny ← Our Wanderlodge is FOR SALE
Next Up

Our Wanderlodge is FOR SALE

UPDATED!  RV WHERE YET is a Vintage Gem that has been lovingly maintained and gently upgraded, updated and enhanced for…

Leaving Iowa we had several weeks to wind our way to New Mexico, and our lives have returned to what…