Spending several days in Half Moon Bay, just south of San Francisco. This is more like we imagined our travels.  Up until now,  we have been pretty actively moving.  At HMB,  we have been pretty actively relaxing!   Our friends Mike and Fran McDowell counselled us on this. When full-time RVing,  don’t think like you are on vacation…it is OK to not do sumthin every minute.  Sometimes you need to read  a book,  do laundry, etc.  So,  from now on when we feel like we are too frantic about activity we shall channel Sensei Mike,  relaxation guru. 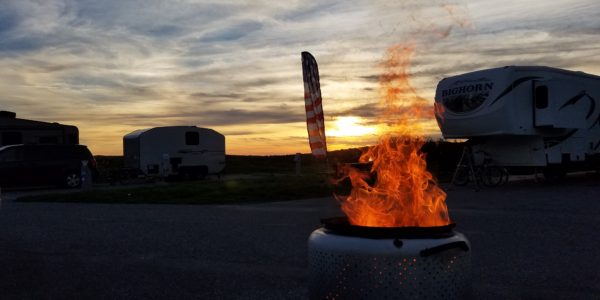 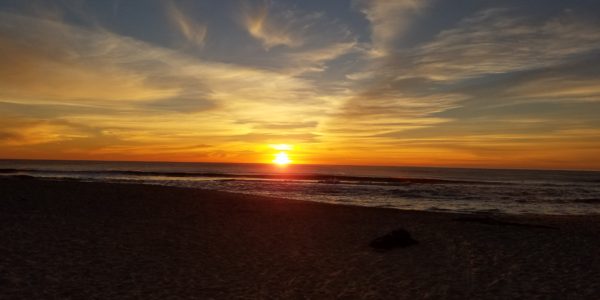 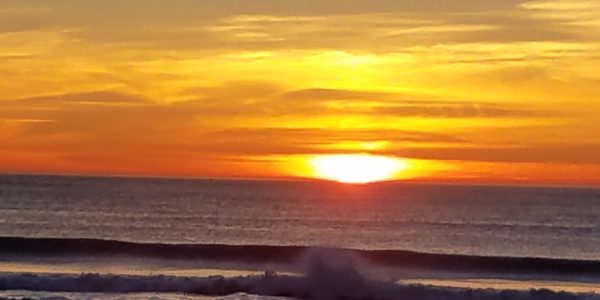 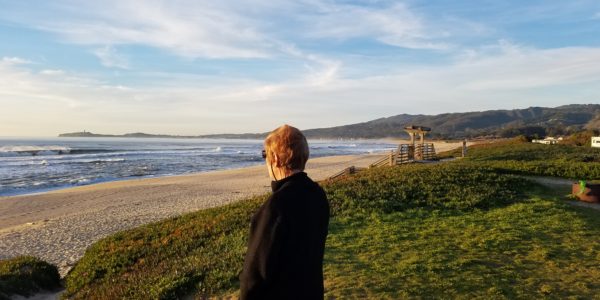 The State Park where we are stayi ng is great.  We are 50’ from beach.  People are extremely friendly — we have given a bunch of bus tours.  There is an excellent coastal bike trail,  which we have used every day.  There is a very nice Brew-pub about 2 miles away right on that bike trail.  Several restaurants serve fresh,  locally caught Crab.  You can also buy said-crab directly from the boats.

On Tuesday,  we drove down to San Jose to catch a Blackhawks game v. the San Jose Sharks. Our neighbor at the park was also going!  He gave us recommendations on where to park (for cheap — $7) and where to eat.  On the latter,  the wait was too long so we went to a small Mexican place and had an excellent (and inexpensive) burrito.

The game result was not what we might have liked,  but we had a really good time.  And it WAS a good game, until the last 2 minutes.    There were a LOT of red sweaters in the crowd and a lot of always appropriate and polite trash-talk.

Getting tickets to the game was more drama than it should have been.  We bought them on line from Ticketmaster.  After gladly accepting my credit card, their system would not deliver tickets to me.  Their tech support could not figure out why,  also could not deliver them to me, and could not even promise they would be available at Will Call.  One agent, about an hour before the event,  actually had the nerve to say, “If They are not able to produce them at Will Call,  call us back and we will work on a refund!”    WOW.  I explained to her that we had travelled 2,500 miles for this event (I did not disclose that we had done a few other things along the way) and a refund, therefore, would NOT BE ACCEPTABLE.

When we got to Will Call,  in fact SAP Center staff, too, could not get the tickets for us.  But to their credit, even though we were wearing the enemy sweater,  they ultimately prevailed and provided our tickets.

As a final insult,  the morning after the game I got an email from Ticketmaster Support.  It said:  “It seems this is a past event, and it took place Tuesday the 31st of this Month, Hopefully everything went smoothly and someone attended and enjoyed event.”  In the email,  there was a link to a customer survey…it was broken!

The rest of the week we spent at the park in relax-mode.  Some bike riding.  Laundry.  Some bus-fixing – and even an idea for a Clown Car Engine upgrade….   I even set up Liz’s WII for her morning exercise.  Yoga and some more-active things such as a hula-hoop simulator.  I PROMISED her I would not post a video,  but I can describe!  The hula hoop thing had the bus vigorously rocking back and forth.  I wonder if neighboring folks are getting the wrong idea about what we do for exercise?

On Thursday we met cousins Kevin and Cecily for dinner at the Half Moon Bay Brewing Company.  Our original plans were to first have cocktails at the bus, then dinner,  but the weather closed in (again).  Off-and-on rain and 40 MPH winds right off the ocean.  Adaptability is key…we had previously stopped at HMBBC on bikes to sample their liquid wares, so we knew that cocktails THERE would be wunnerful (and dry).   The menu turned out to be broad and excellent,  and it was good to catch up.

Friday we head up to Walnut Creek where we have a special permit to park the bus in front of friends Dan and Karolyn Ray’s house.  We have a new definition of friendship now: Knowing in advance HOW we are visiting, “Friends”  still arrange/encourage a permit (vs. arranging to be out of town!).

There are (and should be) limits to friendship however.  Dan keeps insisting that the “best” parking place is in front of his neighbor’s house.  I wonder,  is there a spat going on with the neighbor?  Do the Rays want plausible deniablility if we turn out to be “Uncle Eddie” RVers?

Before leaving HMB,  we became the target of an apparent act of random kindness.  Someone left a bottle of wine on our doorstep.  No note.  No indication of the donor.  Or,  for the more cynical, the California Wine Board (is there such a thing?) is trying to create new “junkies?”

FOLLOWUP:  It turns out, the donor was….the Sharks Fans from the RV next to us.  Such nice people…or possibly the ultimate trash-talk.  Help the Hawks fans drown their sorrows…

3 thoughts on “Half Moon Bay”

Before you look it up,  there is NO LAKE MARIN.  Just a reference to our RV park, which became a…

After our great experiences in Central California,  we continued North to Santa Cruz.  There,  our friend Phyllis arranged for us to…