So, we are learning about unwritten cultural obligations, rules and traditions. For example, it appears to be an unwritten law that guests to the Pacific Northwest WILL BE SERVED SALMON, and if possible BBQ Salmon (if it’s not raining too hard).

Now, we have nothing against Salmon…love it in fact. It’s just that every place we stopped from Idaho (which I realize is NOT the Pacific Northwest, however the Stubbs did go to Law School in Portland) thru Victoria, our friends, hosts, colleagues, restaurants or random strangers said as almost their first word some variation of:

“Do you have any dietary restrictions?” (The polite Canadian part).
“We were planning to serve Salmon and from the BBQ if it is not raining too hard…”

And we have had some spectacular and delicious Salmon. It is truly a regional delicacy. The above should not be construed in any way as a complaint. Just a cultural oddity in a journey replete with cultural oddities. In fact, you could even say this is the motivation for our journey.

An unwritten goal: One Cultural oddity Per Day.

We spent almost a week camped at a really nice RV park situated as close to Vancouver proper as is possible. Directly across the water (Is it a river? A sound? A bay? An Inlet? Dunno. It is salty and has tides) and directly under the bridge (Lions Gate) that takes one into the City. Also right on a waterfront path that goes for miles through nice coastal “villages” with shopping, restaurants, pubs and the Eponymous Sushi Places.

Apparently, this RV park is situated on First Nation Lands. In the USA it would be called a reservation and there would be a casino.

Speaking of Sushi…after a bit of touring with friend Paul Fournier, we stopped at his favorite Sushi Place (there were 4 others within 2 blocks — I am not sure but I thought I saw one called “Eponymous”). Liz and I had remarked only a couple of days before how long it had been since we had sushi (Iowa, Nebraska, Wyoming, Idaho are not the best places for such fare…).   So when Paul suggested this, we started drooling immediately and uncontrollably.

There, we ate all manner of exotic and SUPER FRESH rolls.   The total tab for three for a feast (including beer): $80. Canadian. Proximity to the Pacific and huge Asian immigration/investment equals awesome sushi at native-not-tourist prices. And, yes, there were several rolls featuring the equally eponymous Salmon.

Between sushi and salmon repast, we spent considerable time reconnecting with friends and helping them play tourist in their own city. We’ve done this “Hosting” thing ourselves, even including offering use of our laundry machines, in Chicago for years and for dozens of visiting colleagues and friends.

Perhaps our hosting over the years was a cosmic version of “Paying it forward,” though we have never thought of that way. For sure our friends along our path have treated us like royalty. We (and we assume our friends during our visits) really enjoy the chance to see our familiar things through the eyes and world view of others.

An unexpected pleasure occurred in the company of friends Paul Fournier and Georgina Melanson. I mean even more than the usual joy from reconnecting, walking, enjoying a beer (or, truth be told, a couple), etc.  Paul and Georgina were dogsitting for their daughter. Her dog is an absolute DEAD RINGER for our late friend Heddy. And not just in color and size (which were nearly exact, as you can see in the pic). Same demeanor. Same playful nature. Same way of walking off-leash, alert to surroundings, curious, investigating but without letting master (in this case Paul/Georgina) get out of sight. Took my breath away, to be honest!

And, we had the opportunity to help friends Jack and Sherry celebrate their birthdays. Which, we learned, was not their birthday, or even close to their birthday. Just an excuse to have a party (and, who needs such an excuse?).  I guess if one were to be accused of spreading FAKE NEWS, it should be something like a fabricated reason to have a gathering of friends, food and good times. We quickly got over the subterfuge about the birthday thing and had a great time!

Aside from visiting friends, we spent much of our time in Vancouver and surrounding area walking. Weather more-or-less cooperated. Our RV park was situated almost directly on a trail that goes for miles along the shore…from Ambleside, across the Lionsgate Bridge to Stanley Park and way farther. Walked that more than once (with Sushi along the way). Walked around Stanley Park – 6 miles exactly with panoramic views of all aspects of Vancouver. Vancouver is a great place to visit, and we shall do so again. 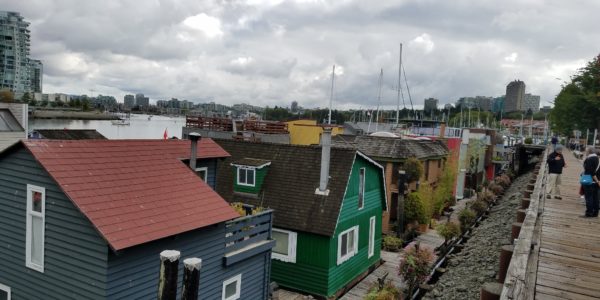 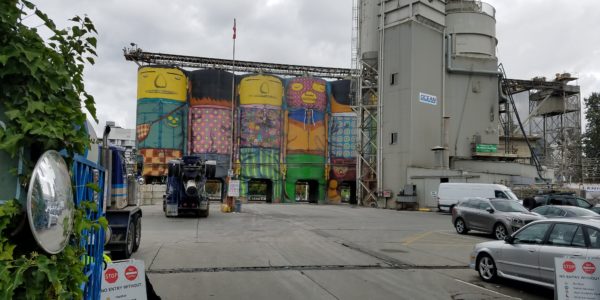 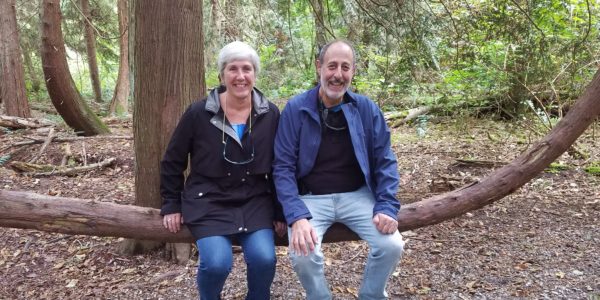 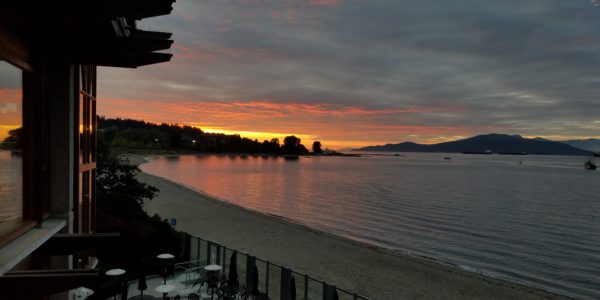 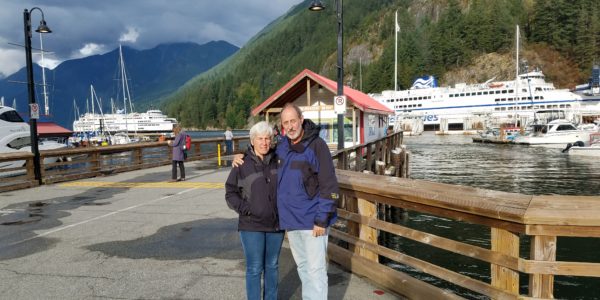 Next stop is Vancouver Island, which will include putting the bus on a Ferry. Looking forward to that challenge.

4 thoughts on “Vancouver and Cultural Oddities Observed Here and Elsewhere”

← Border Crossing No. Deaux. And a Bus Issue of my own deauxing… ← Who Knew the Bus Could FLOAT!
Next Up

Who Knew the Bus Could FLOAT!

[su_pullquote align="right"]I was hoping that the hardest part of this would be SPELLING TSAWWASSEN. Or Swartz.[/su_pullquote] Our next adventure involved…

Border Crossing No. Deaux. And a Bus Issue of my own deauxing…

Thought for the day (Click here) We stopped in Ferndale, Wa. for the night to take care of a few…