Norman’s friend Sarah ‘splained the Aussie Language for us.

And my favorite:  Sparky,  which means “Electrician.”

OK,  it’s ENGLISH (well,  Strayne, anyway) so rules have exceptions!   Here is the video, courtesy of Sarah, that can help you appreciate our continuing enlightenment:   Speaking Aussie (video)

One morning,  with plans to head back to the NGV to finish a floor or two of bizarre modern art that we missed,  we changed up at the last minute.  A crystal clear, sunny, cool, low-humidity day begged for a bushwalk (why not “walkie” I do not know) ,  as they call hiking here (the museum will still be there when it rains).

The Melbourne Metro Train system runs all the way out to the Dandenong Mountains National Park for a few dollars.  There, we found a variety of hiking trails,  and made a loop of about 6 miles.  Which does not begin to describe the level of effort…it was NOT a flat hike,  though “Mountains” might be a bit of a stretch.

Fortunately, the busloads don’t hike at all, so the park was very pristine and unencumbered

This area featured lots of tree ferns, HUGE Mountain Ash (Eucalyptus) and plenty of Aussie birds like Cockatoos, Lyre Birds  and Kookaburras.  There were many more birds here than anywhere else we’ve been because busloads of Asian tourists feed them at an exhibit area.  I don’t know if they feed Bats at night…was not all that interested in seeing them up close.

Aggressive Hospitality: Where guests will never forget your city…if they survive!

In addition to Melbourne-area fun,  we also were hosted by friends Andrew and Linda on the Mornington Peninsula,  in a beachy area town called “Rye.”  At first,  when we got a list of the things Andrew and Linda had in mind for us,  we were a little worried about their “Aggressive Hospitality.”  You know,  the kind where  guests will never forget your city…if they survive!

But Andrew said he was an accountant,  so he had to have a plan.  He assured me that no plan survives first encounter with the enemy (that would be us,  I guess!), and the pace would be what we are accustomed to.  Which is, short bursts of activity and longer periods of hanging out, having a wine or beer and discussing the world.  So, yes,  more political and social questions like, “So, what’s wrong with you guys…”

Andrew and Linda’s place had been discussed in the weeks leading up to our arrival as “Visiting the Shack.” We knew that Andrew’s passion was 4-wheel-drive off-roading for weeks in the bush country…where the first task upon arriving at anyplace (“place” being a very grandiose description for where they might stop) would be to dig  the latrine.  I had heard stories about breakdowns (not unlike our travels,  I guess),  needing to be pulled out of mud, fording rivers, etc.  So we thought maybe they were serious about a “shack.”

This turned out to be anything but…more Aussie Humor.  Great little holiday home up the hill from and with a view of the ocean.

Our low-key and un-rushed weekend included a ferry to a quaint town called “Queenscliffe” where there was a brewery for tastings and, an unplanned and happy accident — a Classic Car show.  About 100 old or modified-old vehicles driving up and down the main street…in the brightest possible (unimaginable) colours.  Spectacular. 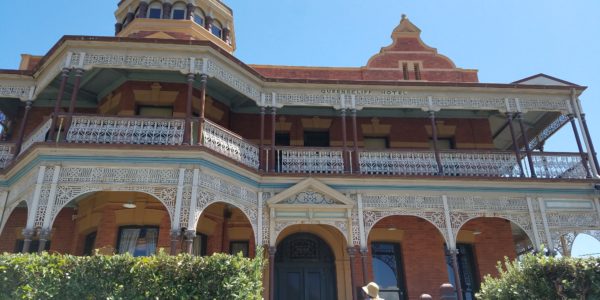 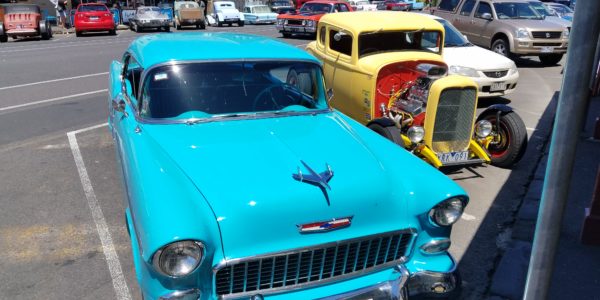 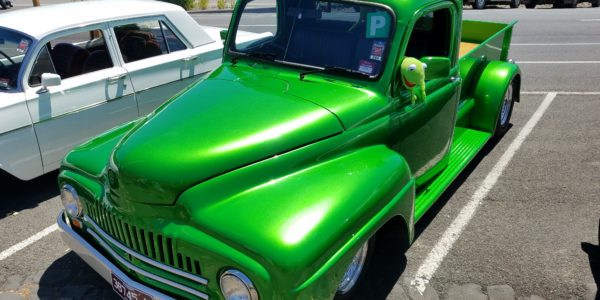 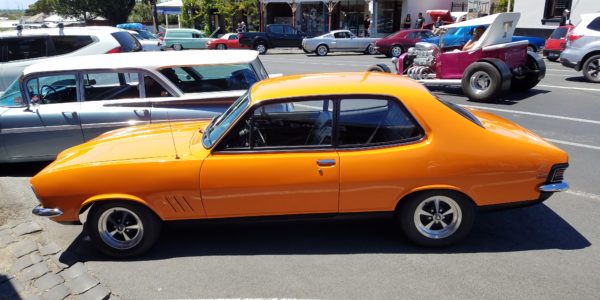 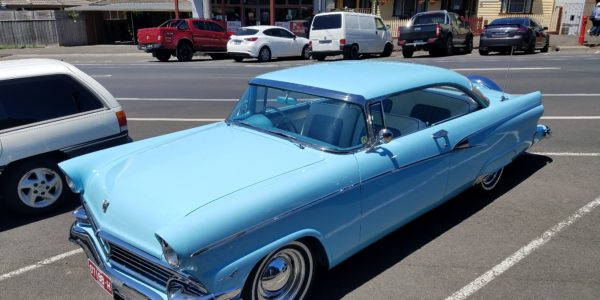 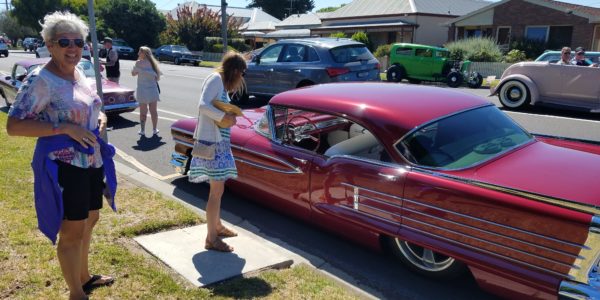 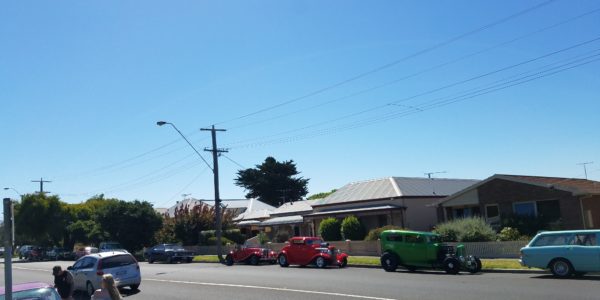 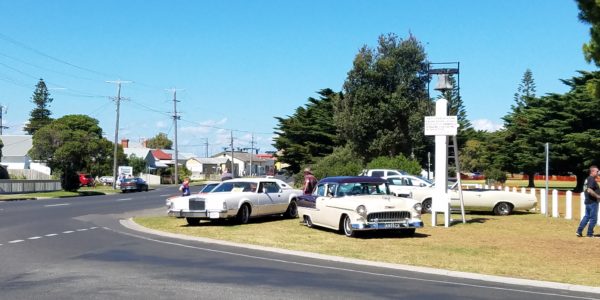 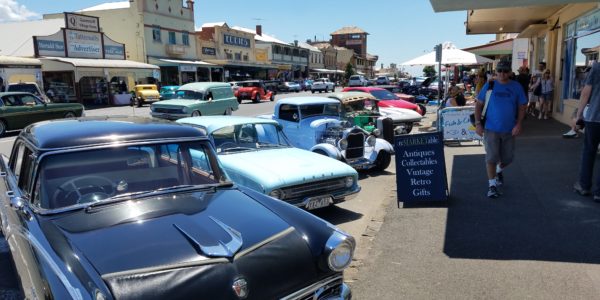 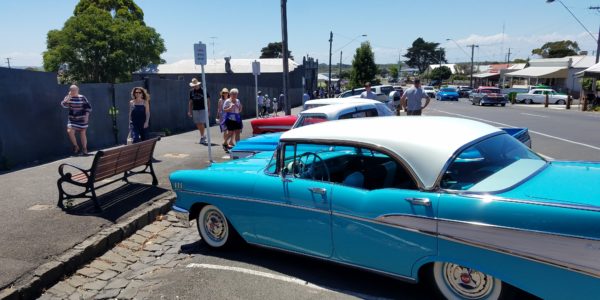 The next day we drove to a few wineries, and a “Cheesery” [SIC].  The latter offered something completely new…an AWESOME Fresh-Goats-Milk-Gelato Chocolate Milk Shake!

One winery had a spectacular Sculpture Walk.

In between all of that,  we sat on the deck watching container ships enter and exit the port, had some chicken on the barby and, eventually, observed the southern set of stars and satellites.

We even had a chance to discuss politics OTHER THAN “what’s the matter with you guys”…  After the usual start, the lively discussion eventually turned to Australia’s recent passage of laws following the US and allowing Same-Sex Marriage.  I guess there has been a lot of angst here about this issue…which can be a focus since they have already solved things like health care and are not planning or discussing a wall of any kind.

There was definitely a wistful remembrance of the days when the US was the world’s beacon.  Of course,  Australia has followed that beacon for awhile,  into Vietnam, Afghanistan, Iraq, etc.  So maybe they are a little glad the lights are off now (metaphorically and intellectually speaking),  there being no desire to follow most of what the US is leading on,  these days.

And, speaking of hospitality, there’s Norman to discuss. Norman’s place is right on a Tram Line,  which gets you to basically anywhere, and an easy walk to Glenferrie Street with hundreds of restaurants.

“Big-Bash” is a form of cricket made for TV and short-attention-span-Yankees, apparently.

Norman has been a spectacular host, furthering our Cricket edumacation in preparation for what we HOPED would be the BIG BASH CHAMPIONSHIP GAME!!     For that to happen, #4 Hobart had to beat #1 Perth in the Semis, which actually happened!!  We needed #3 Melbourne to beat #2 Adelaide.

Could have happened!   Well, it didn’t happen.  Melbourne lost their game by ONE RUN.  178-177.    Let’s just say that is a very unlikely and heartbreaking outcome.  ONE RUN!  In context of UNlikelyhood,  it would be like playing an entire season of baseball,  and having the final outcome to choose World Series teams decided by a bad strike call in the ninth inning with man on third and second.

Sometimes, just for fun, I re-arrange the silverware so the forks don’t all point the same way in the drawer.

To say Norman’s place is “neat” would be like saying the Chicago Bears suck. Both are true but neither is even in the ballpark (or the Cricket Pitch,  in Norman’s case).  Liz is having a little easier time of it…she has the clean-gene which I definitely do not.  I am getting a little stressed.  NOT.

Anyway,  Norman has stayed with us in Chicago a few times and he has survived the disorder.  And claims we are not causing HIM any stress as long as he closes his eyes when he passes the door to his study (our room).  Which EVERY DAY Liz activates the clean-gene and straightens to a level not seen EVER on the bus!

When we leave (please,  let that be soon,  Norman’s aura screams!),  we’ll need to show our gratitude to Norman for suspending his OCD and tolerating us.  Liz is thinking of several nice gift options.  I am considering rearranging his sock drawer so that the carefully folded pairs are a jumbled cacophony of alternating patterns and colours.

2 thoughts on “Speaking of Barby, and of Mumbling…”

← Do You Believe in Coincidence? ← Melbourne Wind-up
Next Up

We met friends/Stalkers Nancy and Sid shortly after they arrived at their hotel.  Our mission was to help them stay…

Do You Believe in Coincidence?

[su_pullquote align="right"]“ Of all the gin joints in all the towns in all the world, [they] walk into mine”   …