(and Holland-America-Dutch, and of course a Celebrity)

I am referring, of course, to the Cruise Ships. The two days we were in Skagway, there were a total of NINE Boats. 4 one day, and 5 the next. Now, most of the boats have a MINIMUM of 2,800 people on board. SO, my rudimentary math skills suggest that a town with a permanent resident population of about 500 hosts up to 11,000 invaders every day!!!

The Skagway story is not at all like the one we experienced and were told about stranded air travellers that decended on 9-11 on Gander, Newfoundland. Only the numbers are similar.

There, the story was of human compassion and friendliness above-and-beyond the call as the few hundred residents found space and food and hospitality beyond measure for the temporary horde. Here, the story is one of rampant capitalism. The boats disgorge their passengers, there are 100 souvenier shops and there is a cadre (more like a fleet) of buses of all sizes and shapes waiting to take them to see all the wonders of the White Pass and Skagway area. There is a caravan of these vehicles that leave Skagway in the morning and return in the late afternoon —  we passed MANY on the way down the grade into Skagway upon our arrival.

I should enrich that statement a bit (“down the grade”). The road into Skagway follows essentially the same route that the Klondike Stampeders followed OUT of Skagway to (they hoped and assumed) their fortunes in the Klondike Gold Fields. Then, the path was treacherous. Very steep, muddy, rough, narrow, and JAMMED with people and all manner of supplies. The White Pass (and the nearby Chilkoot Pass) killed or turned back many stampeders.

Today, it is still very steep – an 11% grade for 20 miles, though the road is quite good. 11% is a heck of a grade – we did it downhill in 2nd gear at 20mph and with the Electric Driveshaft Brake on the whole way. Getting OUT of Skagway is much the same (see below). We could appreciate the route travelled in 1899, but of course we were warm and comfortable on that route today. The Stampeders were anything but.

Right in the middle of the grade you find US and Canadian Border Control. You have to check in in both directions, which as usual for us was a mere formality, coupled with a friendly greeting. On the way OUT, the Canadian Agent wanted to come aboard. WE think he just wanted to chat, which we did for 10 minutes. Probably he was sizing us (and our story) up, but he was friendly about it (of course he was friendly – he was Canadian!).

We found that the town itself is VERY interesting, and not too jammed with touri (plural of tourist) during the day. MANY of them get on the aforementioned Tour vehicles in the morning, and return late afternoon. So, mid-day is not “awful.”

I bet the Skagway Chamber of Commerce and Tourist Bureau would not appreciate my characterization – “Visit Skagway! It’s “not awful” during the day!!” …but there you go!

And actually, the National Park Service has a visitor’s center with an EXCELLENT historical movie. We also took a walking tour with a ranger. And, there are TWO Breweries.

Then the tourists get back from their excursions. AAACCCKKKK!!!! The good news is, the boats all leave at about 8PM. It is still broad daylight (they could leave at 2AM and it would be broad daylight), and we went down to the pier to watch the ships leave. It is like a slow-motion ballet…fascinating and impressive and repeated every day between early April and Early October.

After the various boats left (within about 60 minutes of each other at about 8:00 in the evening), the ENTIRE TOWN disappears. Everything is closed. Nothing is moving. Nothing whatsoever to do, eat or enjoy. Except, we asked a local, two drinking establishments – the Red Onion and the Bonanza. That is where the locals go, so that is where we went. The Red Onion is a former Brothel, though that is NOT still on the menu. Actually, they had good food, and a couple local beers.

We never did the Chilkoot Hike or any River-rafting – I woke up one morning with a bit of a backache…not serious, but not something that allowed for neither.

Leaving Skagway, we got a little bit of a taste of what the Klondike Stampeders must have experienced. The 11% upwards grade for about 20 miles is on what was essentially the White Pass Trail in bygone days; still a narrow-gauge Railroad and now the road into/out of Skagway. The bus, as always, makes it up grades like this, but @ 10MPH in first gear. PLENTY of time for the mind to wander, imagining mud, dead horses, and human misery and death in 1899. We, too, are heading to Dawson City, which was the ultimate destination for the Klondike Stampeders. Their journey took months, and they arrive to find that ALL the Gold had been discovered and Claims Staked the year before. Virtually NONE of the Stampeders made a nickel off of gold.

Our next stop was the “City” of Whitehorse in the Yukon. It is the capital of the Yukon, and has a significant fraction of the total population living there. There were a couple very nice Grocery options! And a “Canadian Tire” (Big…and with a wide range of merchandise including tires, camping supplies and lawn furniture) store where I replaced the Jeep’s Battery and had a leaky tire fixed. Whitehorse has 25,000 residents, The Yukon about 38,000 and, we are told, about 70,000 moose. 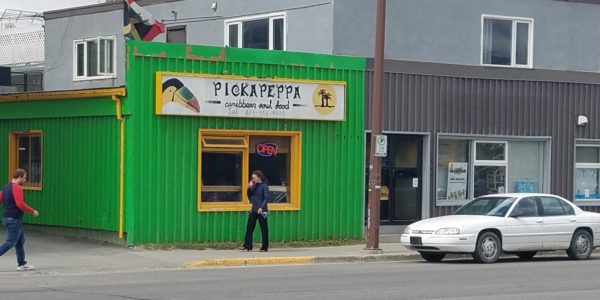 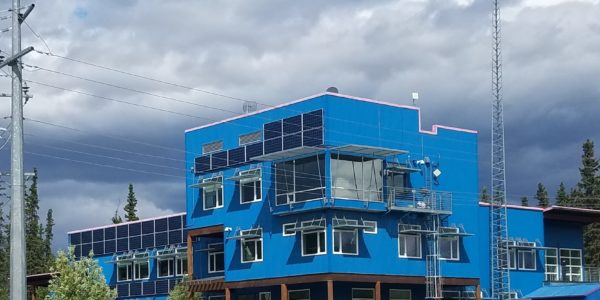 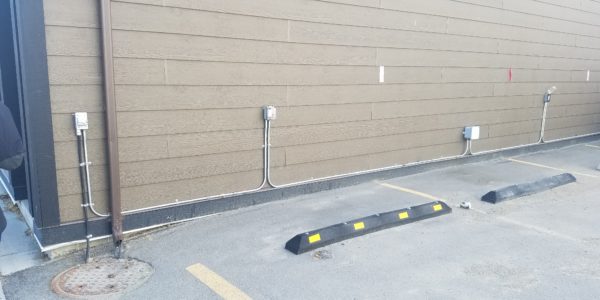 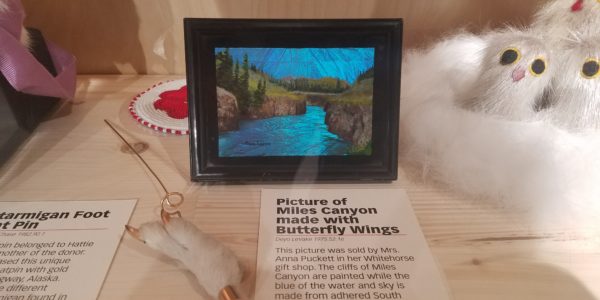 We have seen more bear than moose, in point of fact. There are an estimated 6,000 Grizzlies, 10,000 Black Bears. While in the Yukon, we learned some important and relevant tracking skills. You can EASILY tell Black Bear Shit from the Grizzly version, if you see it on a trail you are thinking of walking down. Black bears leave behind “evidence” rich in seeds and berries and such. Grizzly shit contains sneakers, backpacks, bear bells and empty cans of bear spray!

On the latter, Bear Spray is nothing more than a HUGE can of pepper spray capable of generating a stream/cloud out to 20 ft. We bought some in Yellowstone a couple years ago, and have never used it but carry it along to this day. One outdoorsman told us he wasn’t a fan…if the bear is upwind and you try to spray him, all you will do is nicely season yourself! Liz asked him what HE did for protection – he said “I have a knife.” I THINK he was kidding; We decided to watch for shit along the trail and respond accordingly!

Anyway, Whitehorse was really interesting, historically…Located on the Yukon River, which was THE route to Dawson City, it was once a center for the Stampede to the Goldfields AND, later, a major center of activity around construction of the ALCAN Highway in World War II. The Alcan was built to defend Alaska from the Japanese Threat, and was a substantial engineering challenge. A lot of material moved through Whitehorse.

Whitehorse had a couple of museums on other matters. The first was a Transportation Museum that featured all the various means of movement around the Yukon – from old and crazy Snow Machines to huge-tired highway equipment designed to operate in the mud (which there is PLENTY of in the springtime). Next, a museum called “Beringia” which discussed the paleontology and archaeology of the region.

At the latter, we learned about what I had understood previously to be a “Land Bridge” between Asia and North America. Visions of the ancestors of modern first nations people and wooly mammoths queuing to cross the skinny bridge! Such a bridge (in my mind) would have had a toll booth today! WRONG!!! This was not a “bridge” – but rather a continuous Land Mass that extended from the middle of Siberia to the edge of the Ice in North America – basically Alberta and east. Thousands of miles across, and in place for many, many eons. The scale of the map is deceptive (and why I thot this was a “bridge”) — Alaska is 2x the Size of Texas!!! Beringia was more of a subcontinent, stuck between Glaciers in the West (Europe) and East (North America).

The Beringia museum had skeletons and mummies of Wooly Mammoth, Short-faced Bears, North American Horses and more. I did not realize that the Horse evolved in NORTH AMERICA and migrated across the Subcontinent of Beringia TO Asia. Same with the Camel! Both started here and moved to Asia (and, both becoming extinct in north America after the Glaciers retreated and the connection was broken between Asia and America) !! I had always heard that Horses came to North America with the Spanish – more correctly, they came BACK to NA with the Spanish! FASCINATING.

There was also a cultural and history museum, the McBride, in downtown Whitehorse. This talked about the people and peoples in the region since the beginning of recorded history. So, BEFORE and during the Klondike Gold Rush, and before, during and after the construction of the ALCAN Highway by the US and Canadian military, concerned about Japanese invasion in WWII. There was a large exhibit of mostly photographs and a written history of the construction of the Alcan, which REALLY helped me understand how the roads we have been driving on were carved out of the mud and mosquitos. And the museum sat right on a VERY nice Bike Trail along the Yukon. 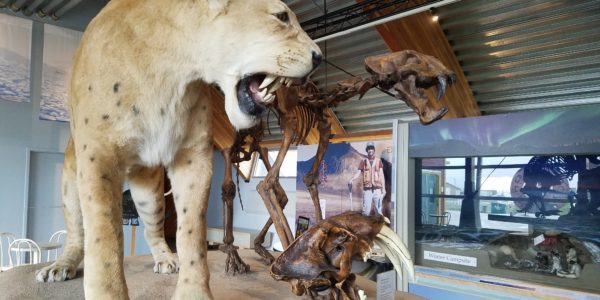 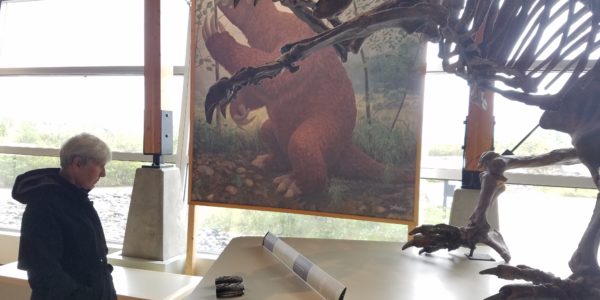 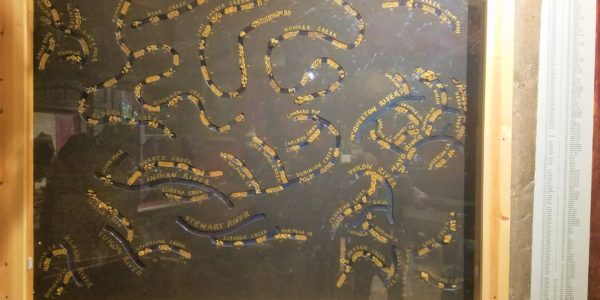 All of the museums were SPECTACULAR. And Whitehorse, itself, was pretty darned good. Up to and including the Winterlong Brewery. Which is named so because it is! 40 F Below from November to March.

We continue on under the midnight sun, warm and fortified!

4 thoughts on “Skagway – a PRINCESS of a town.”

Before we get into our experiences in Dawson City, You might have noticed not much in the way of mechanical…

We reached Watson Lake in Yukon Territory after driving on what can only be characterized as a really bad road.…