Yellowstone was the first of the USA’s National Parks. A bold experiment by foresightful men. Actually, at the time it was creation of a playground for the exceedingly wealthy. These were the only folks who could afford to travel to such a remote and inaccessible place until Henry Ford made transportation there affordable to all.

We haven’t been to all of the other (or even many of the others) National Parks, but it is hard to imagine any are “better.” Yellowstone has been preserved and managed supremely for the benefit of all who visit. It suffers a little from the volume of people that visit every day, but the infrastructure is pretty well established to manage the throngs that come to certain areas, and by far the majority of the park is still pristine wilderness.

We arrived in the park from the East. It took us no time at all to clear the east gate, but we made up for that with a long climb at approx. 15-20mph up to Fishing Bridge, which has an RV park more-or-less in the center of Yellowstone. For some reason, we were able to book 3 nights at this park at the last minute. Fate smiles on us…every other spot was full (I posit someone cancelled at the very moment I was browsing for availability a few weeks ago).

On the way up we had to stop a couple of times as the engine temp came close to max on a 90+ degree day climbing to 8,500 feet. No problem, though…plenty of pull-outs for us to pause in. We also had our first wildlife sighting…a lone Bison who decided to take a leisurely stroll on and along the main access road. They are definitely bigger and heavier than the Clown Car.

It is weird that the Rangers feel the need to post signs: ”$5,000 fine for approaching Bears.” Are bears the problem, or stupid people?

The RV Park itself was very nice. Full hookups. Completely full, and spaces a little tight, but arranged sort of in “lobes” so you don’t really feel the presence of 300 other RVs. Our “lobe” was in the middle of the forest, and one could hear large animals all around us. In fact, no soft-sided campers or tents allowed in this area at all due to the frequent presence of bears. Liz decided her normal, daily, solitary 4 mile run could for a few days be supplanted by long hikes with plenty of people around. And we bought a can of bear repellent.

So much for the logistics of arriving and staying in Yellowstone. Now for the park itself.

From the first hour in the park, you can feel that you are in a special place. There are a LOT of tourists. Even though the number may have been reduced because school has started many places, I felt like that calendar fact just raised the median age. A ranger did assure us that the park was FAR LESS CROWDED than it would be on a beautiful July day.

The Crowds tend to be concentrated at places where tour buses go: Old Faithful, Mammoth Hot Springs, etc. Those places are definitely worth seeing, and have large parking lots, lodges, visitor centers, etc. If you simply drive around, though, you find almost infinite pull-outs, trailheads, beaches, picnic areas, etc. Most with few or no people. Walk a mile off the road and there will be few or no people at all.

And in every direction you look there is a vista better than the last. Setting aside the “ordinary” mountains, alpine lakes and vast forests, the thermal features are magnificent and other-worldly with bubbling mud, geysers, smelly steam and brilliant, “unnatural” colors. A ranger told us that Yellowstone has about 50% of the world’s known surface geothermal features; and I believe it. Just walking through the forest you will happen upon “stinky-air” and there will be a bubble of mud, or a fumarole or other reminder of nearby volcanism. Even the fire-scarred forest areas (a routine and important happening) are impressive in their own way. 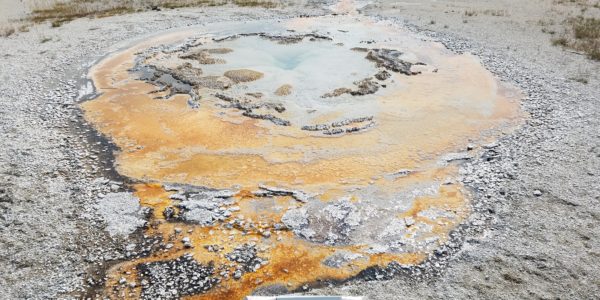 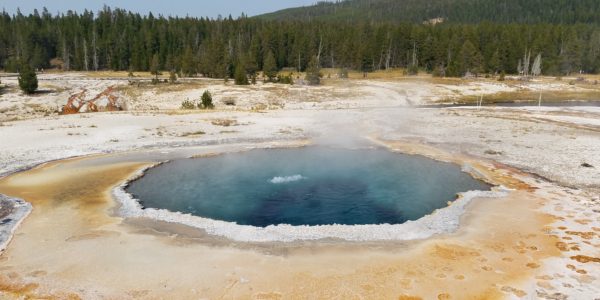 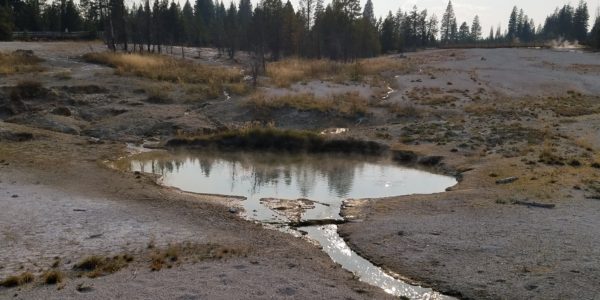 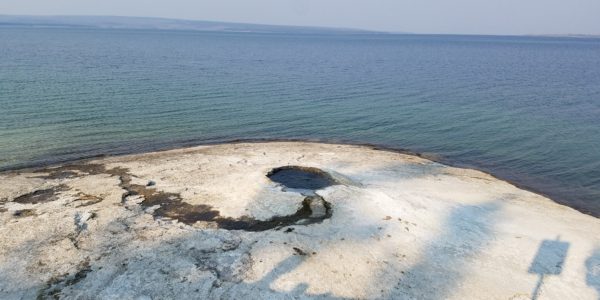 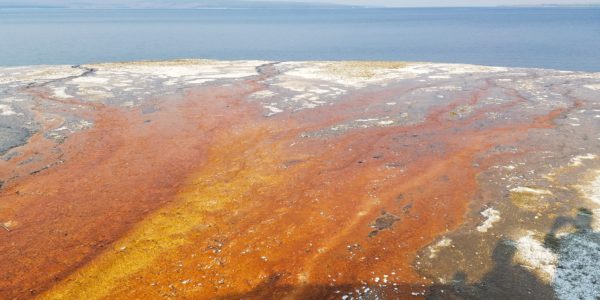 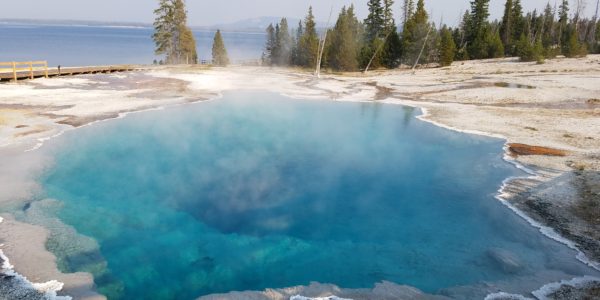 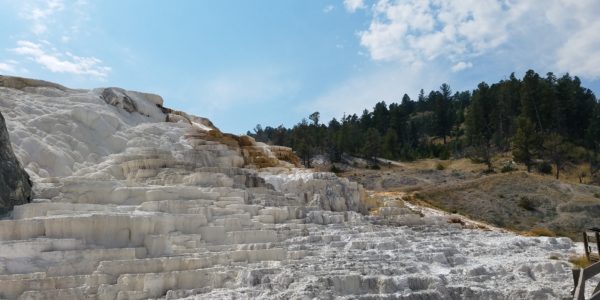 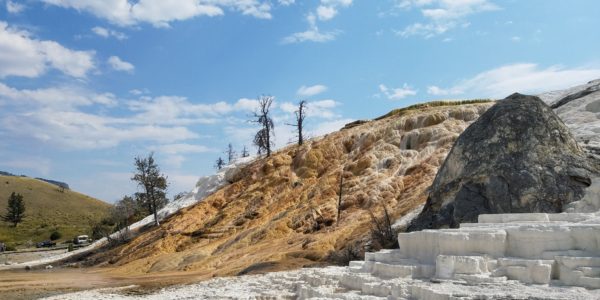 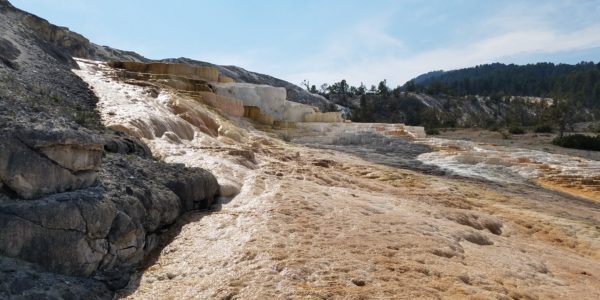 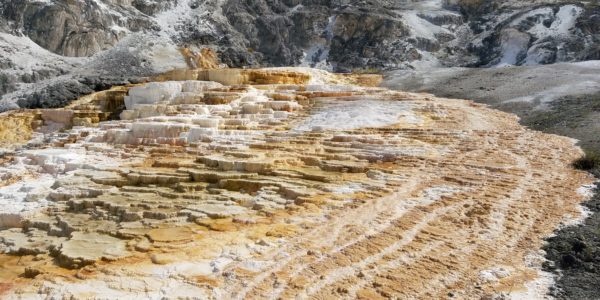 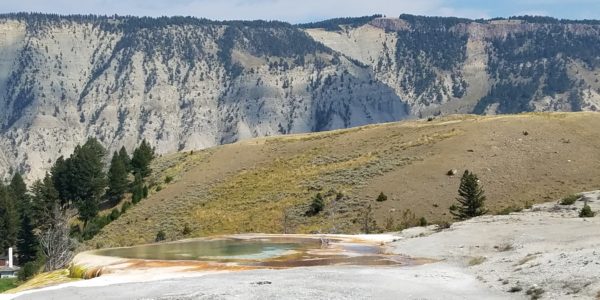 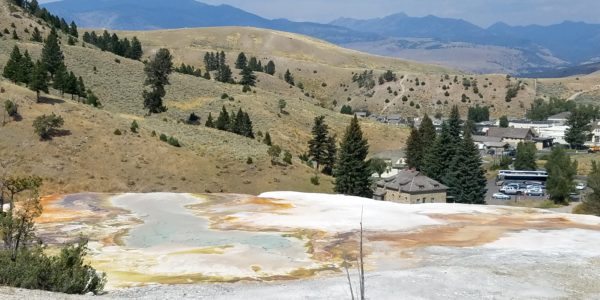 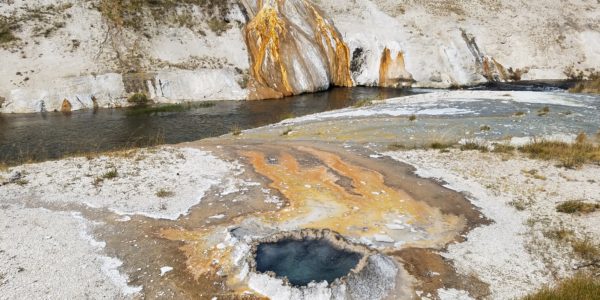 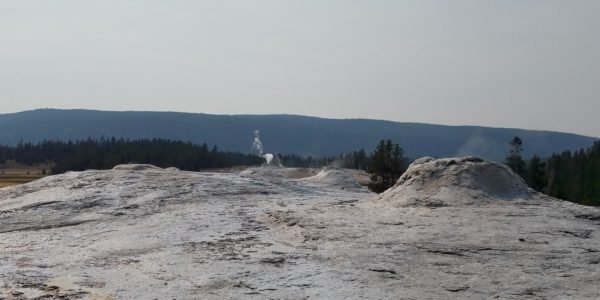 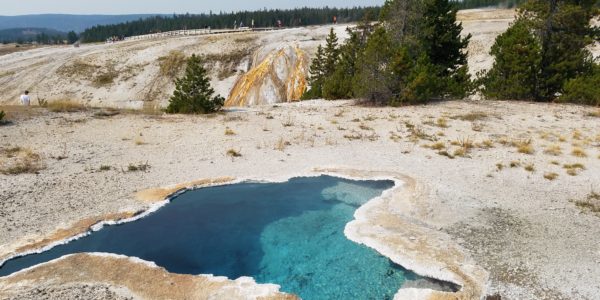 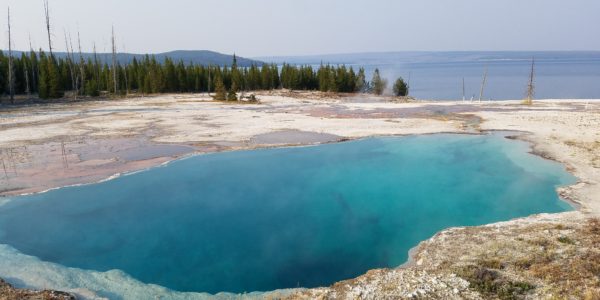 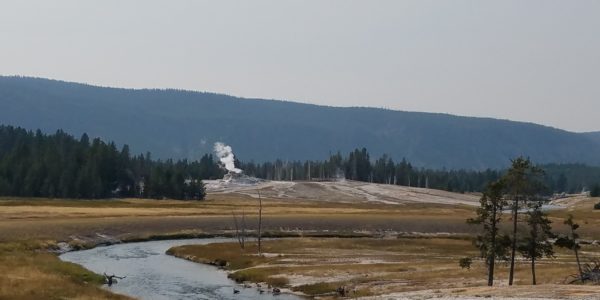 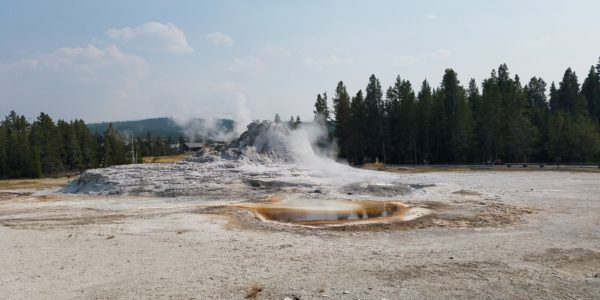 We spent two full days moving around the park. We visited the “main” sites such as Old Faithful and Mammoth Hot Springs. We drove through panoramic valleys and along scenic ridges. We spent time in traffic jams caused by groups of Bison in no particular hurry to cross the road. LOTS of Bison. We went on several hikes with the specific intention of finding other animals – bear (though Liz would have preferred to see them on TV), Elk, Wolves. Our attempts at “other” critter-viewing were not very successful, but the effort included some magnificent hikes through valleys full of Bison, along Yellowstone lake, etc. We even attended a ranger lecture one evening in an outdoor amphitheater near our campground, where we learned more detail about the geologic features and history that make Yellowstone unique. 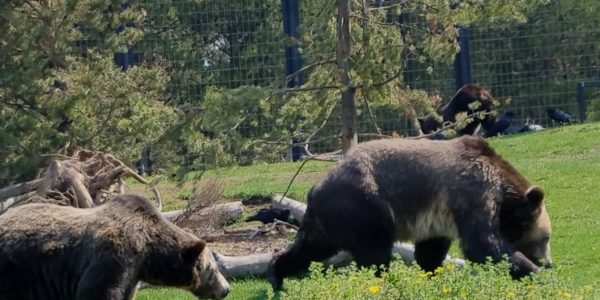 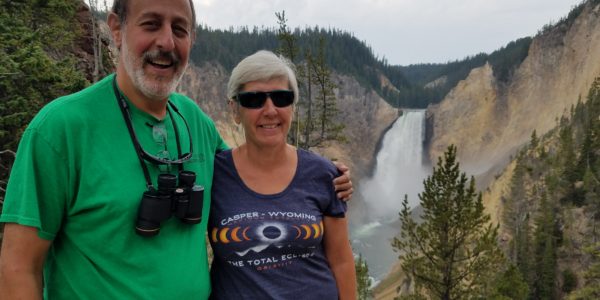 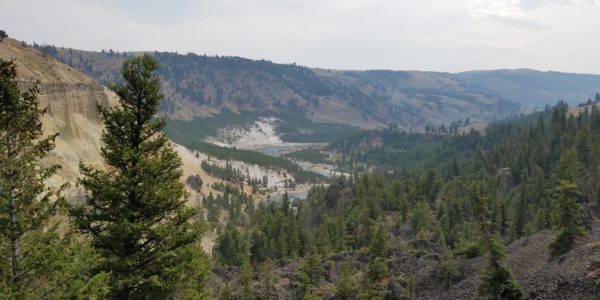 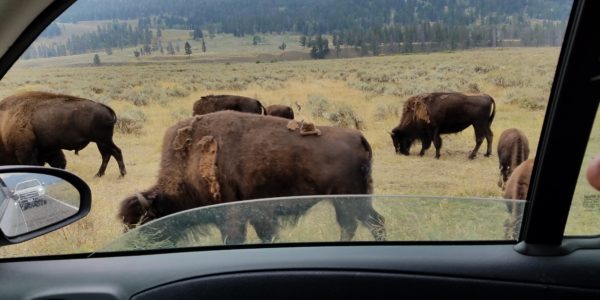 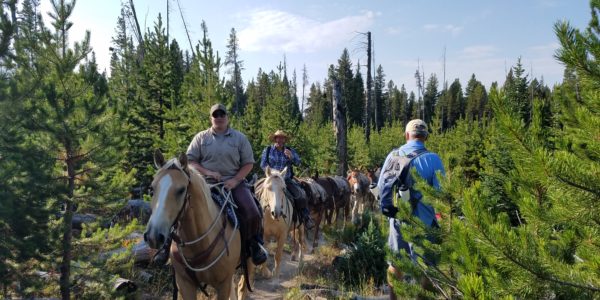 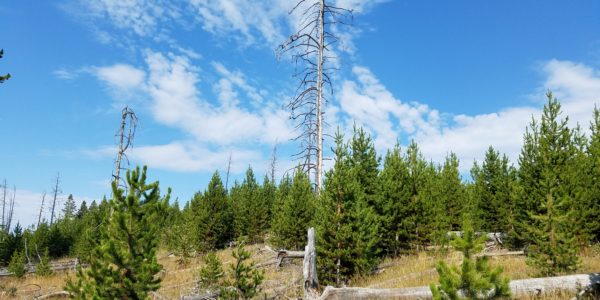 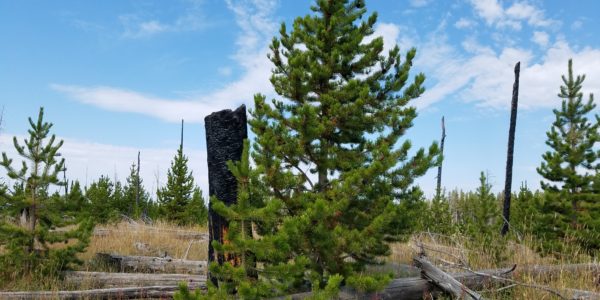 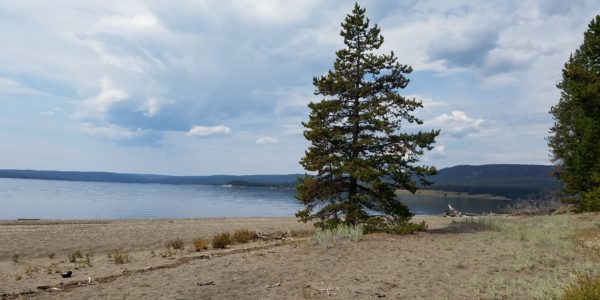 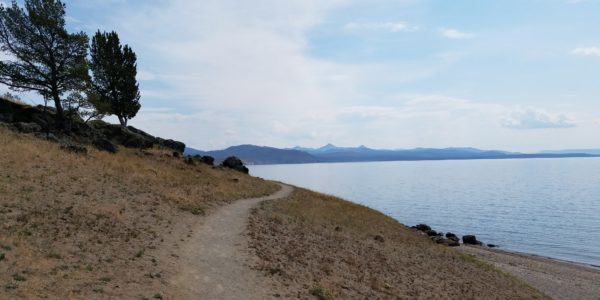 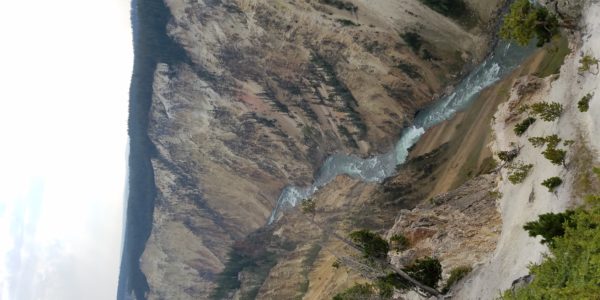 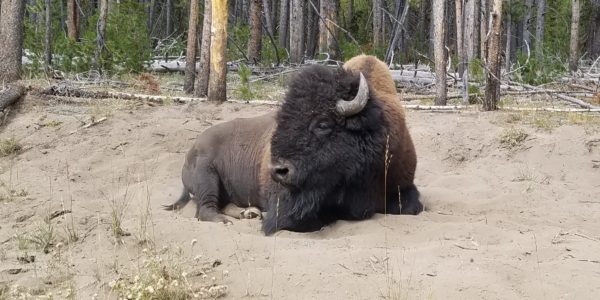 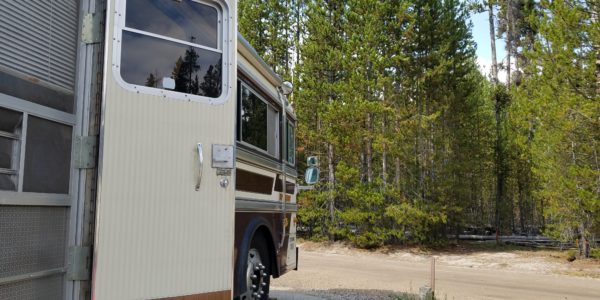 GlampingInYellowstone
I have certainly never been told before to forego a pedestrian path for the centerline of the highway, the latter being safer.

In the category of “You’re not in Chicago anymore” were the Ranger’s instructions after the lecture: “Those of you who walked from the RV campground (we did), do NOT walk back on the trail…it is not safe at night due to MANY bears in the area. Please walk down the road!”

Unfortunately, we were not able to see what many consider the “best” part of Yellowstone: The Dark Sky. Normally more stars than one can imagine. The problem is, in addition to normal clouds and weather, there are lots of fires upwind and around the park. Their smoke makes for a perpetual haze. Great sunsets, but not a spectacular star-show.

So, no place is perfect. Yellowstone has some warts. For example, the air stinks. It’s related to all the geothermal activity. In some places the air really has a heavy sulfur smell. In others there is just a hint of the geological gastric distress going on underneath. For the first couple of hours, I assumed the smell was from our blackwater tank, and I needed to drop another tablet down the shitter. I realized this was NOT the case when we walked ½ mile to the General Store and visitor center – and still the smell was there. The bus has never (so far) been “noticeable” from that distance! When we were in Rotorua, New Zealand, the air smelled similarly, and Liz’s silver jewelry all turned temporarily black. That, at least, did not happen in Yellowstone.

And, NO WIFI and LITTLE CELLPHONE SERVICE. With a couple of very constrained exceptions. Some areas have limited cell service, but these tend to be areas where there are lots of people, so while one’s phone looks like it should have service, all circuits and data are busy. Clearly, management has decided NOT to wire(less) the park because even remote places like Big Bend Nat’l Park had available Wifi. Now, some might consider this an advantage and would actively seek out such…such… prehistoric-ness. Not this retired techie. I am very comfortable with admitting my need for connectivity – crushing lack of internet is not to be (cannot be) endured for long – indeed, three days was quite enough.

Free Wifi” there seems to mean “WiFi where one needs to chase down and capture individual, “free”-range packets…”

So we moved on…first to West Yellowstone for a couple days. This is a small town just outside the west entrance to the park. And, there is INTERNET! Though not much internet.

Once the no-tech DTs stopped, there was a Grizzly Bear and Wolf Center there, so though we did not see any in the park, we spent some time learning about them. After West Yellowstone, we’ll be meeting up with college buddies Dick and Tyra Stubbs for a guided tour of Idaho!

← Cowboys and Bus Mechanics ← Idaho Famous Potatoes
Next Up

Click here for the Thought Of The Day... [caption id="attachment_2926" align="alignright" width="300"] With our Benefactor - George[/caption] Leaving Casper, we…