We made it to Casper and the fairgrounds, where the Bluebird Rally was situated. Ultimately, there were 88 Bluebirds of all types and generations there. I think ours was the oldest…and the shortest.

The latter caused us to be “relegated” to an area behind the livestock barns. Only 5 “short” spots there. Our first thought was a slightly disappointed: “Shoot…a bit away from rally-central.” As it turns out, “Rally-Central” was next to the rodeo arena (and commotion) and in the middle of a big open field (no shade). Our area was secluded, breezy and shady! Folks from Rally Central were more than a bit jealous of us!

If you think about the idea of 88 bird-brains travelling all the way to Casper to stand around in the dark for 2 minutes, you get a bit of a sense for the atmosphere at eclipse-central. But at least for Liz and me, the “reason“ for being here was about 50:50 eclipse madness : meeting new friends.

The latter are not only lovely people, but they have old Bluebirds and lots of experience fixing and maintaining them. And, our immediate neighbors, Charlie and Carol Mitchell turn out to be among the friendliest…with a KILLER, RV-friendly margarita recipe. And a place with a hookup near Austin, Tx.!!  As fate would have it,  we left Austin for “next time” when we went thru Texas last winter!

Another invited me down to their bus to “buy me a beer” while Liz was gambling (losing) our laundry quarters with the ladies. Turns out Gary (retired owner of a plumbing company) had to help a fellow Bluebirder with a leak in his sink/faucet. Not forgetting his offer, “Buying me a beer” meant “thrusting one in my hands, then bolting for Home Depot and then a repair session.” And because it is a Bluebird Rally, without being a personal affront in any way! There were a half a dozen other folks in a circle enjoying beverages… It’s all good! Including , shortly, the sink!

As to eclipse madness, there was certainly quite a bit of that, even though we had a great and peaceful campsite. The infrastructure in Casper was a little over-taxed, though gas, diesel, milk, tequila, ice and beer seem to be in pretty good supply. Locals kept asking us what we thought of the traffic. I am sure there was traffic. Perhaps 4 cars at a stoplight instead of three. But my standard response came to be: We are from Chicago…the WORST you can do traffic-wise would not register on the Chicago-meter.

I was actually interviewed by the local TV station…they were curious what we “ferners” thought of Casper, its preparations and festivities. Easy to answer that question: Casper’s downtown is very nice and was all spiffed-up just for us! Main street blocked off so as to not mix all that “traffic” with wandering, foreign pedestrians.

Most memorable: A Pub featuring 10-15 local beers and the most high-tech dispensing system I have ever seen. You buy a debit card and load it with money ($10 minimum). Insert this into the tapping machine and draw your own beer, as much as you want of 10 products on tap. As you fill the glass, the flat-panel display shows the amount dispensed and amount ($) remaining on your card as two bar graphs heading in opposite directions.

Still, clearly the eclipse did create certain challenges locally…because the population of the area was AT LEAST tripled. The local Walmart’s shelves were well stocked in the morning, but, we were told, somewhat sparse by afternoon. Internet access was painful or non-existent. One Bluebirder had a friend who would have flown up (he’s a private pilot) but said there was no place to park an airplane within 500 miles.

Perhaps one of the issues: Bluebirder-Pilot-Friend was told there was to be a 747 from Saudi Arabia arriving for the eclipse. I would not have thot the Casper Airport would have a runway long enuf.  And, a 747 shares a bit of challenge with our Bluebird: It is TOO HEAVY by a good bit to park on just any grassy area off a country airstrip!! But, turns out Casper Airport is an ex-military base. He was told that they were going to rope off the plane on the tarmac so no customs required (there is only one Customs agent in all of Wyoming!.  Imagine…for a few hours a little piece of sovereign Saudi Territory in the middle of Wyoming. And the eclipse itself. Hard to describe. No, IMPOSSIBLE to describe. I did not know what to expect, and it was all of that. Really interesting and “moving.” The crowd reaction, the ominous progression of the moon across the disk, awesome display of the corona, the Diamond Ring, the String of beads, the temperature drop, the silvery light, the confused birds heading home to roost. The TV Drones filming the crowd.

I  could easily imagine myself as a prehistoric person, viewing this event with abject terror. I found even my modern self wondering if the sun would, in fact, return, and what was this ominous black disk that obscured it! I spared the crowd any  singing or dancing or fireworks from prehistoric-me. I will say this last thing about the eclipse itself: The difference between 90% (which many people who did not trek to totality saw) and 100% is NIGHT AND DAY (pun intended). You cannot imagine, and I cannot explain why. If you get a future chance, you MUST do it. (2019 in Chile…2024 in the USA).

While in Casper, the rally afforded us a variety of opportunities for appreciating western history and culture. There was an organized caravan-car-tour of important sites on the Oregon and California Trail which follows the North Platte River right through Casper.

It was our great fortune to be guided by ranger Shawn Wade of the Bureau of Land Management in the lead truck and on the radio. Shawn is history buff — extremely knowledgeable and passionate about Wyoming and western history. He guided us to sites that would be invisible to the average visitor…graves of would-be settlers in the middle of private fields where there are 1800’s wagon ruts and remnants of the original trail; register cliffs where settlers wrote their names as they passed; a piece of a bridge put up by mountain-man-entrepreneur John Baptiste Richard (spelled on various markers as “Reeshaw” because of French pronunciation) to offer safe passage across the river (for a price). 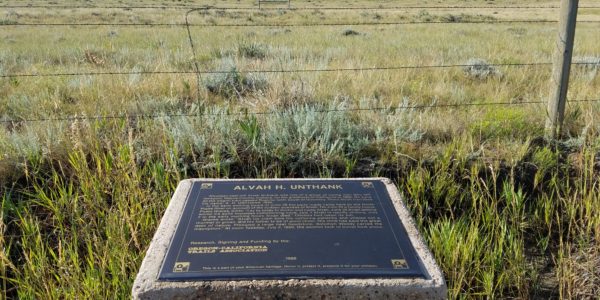 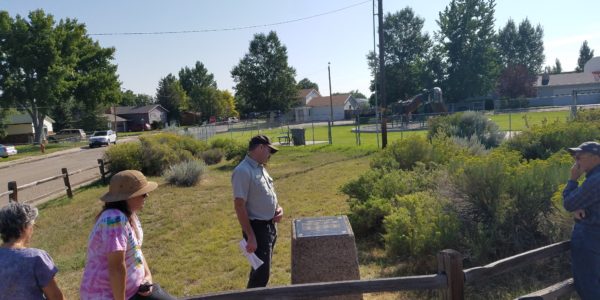 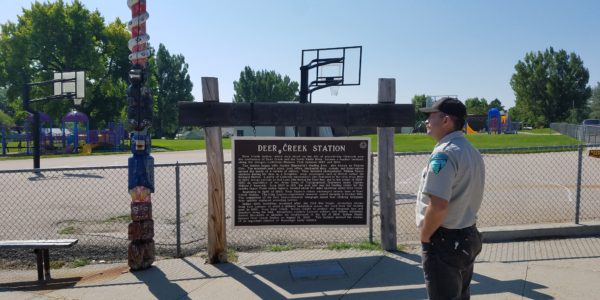 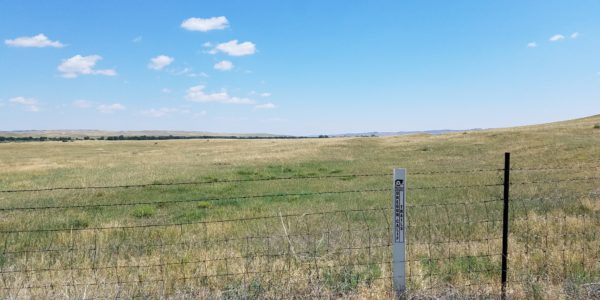 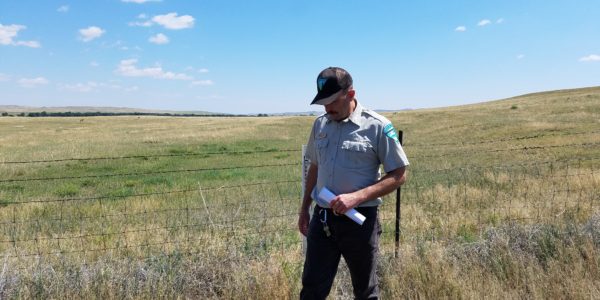 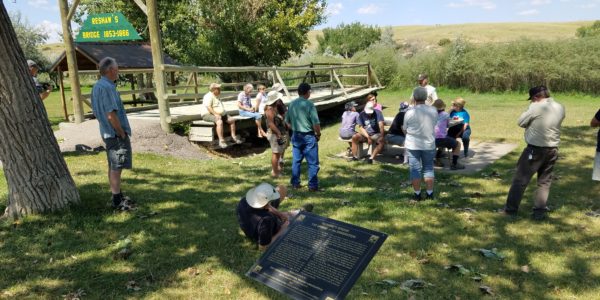 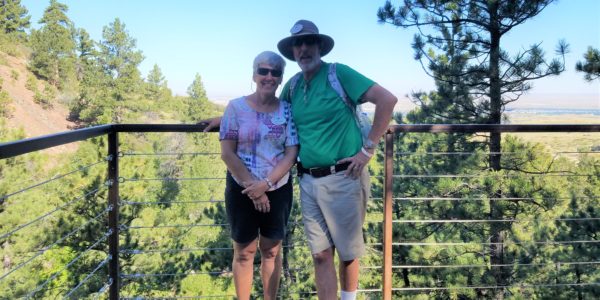 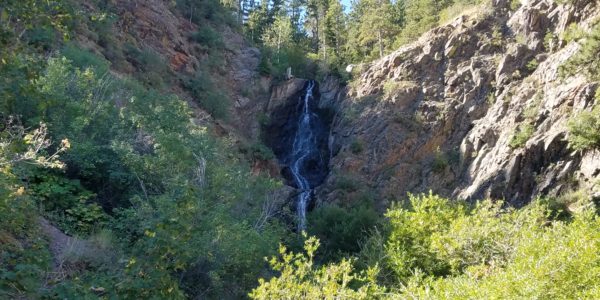 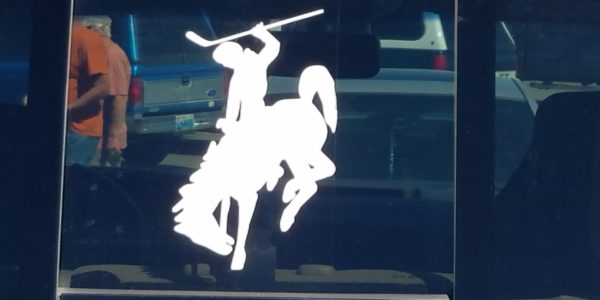 There was also a professional “Roughstock Rodeo” at the fairground, so about 100 yards (they surely don’t do metric in Wyoming!) across the lot from our campsite. The Rally booked an entire section. The section was right in front…and to say you could see well was an understatement. The Bull-spit easily reached us. The impact of the animals on the ground could be felt in our chests. Though, to be sure, not in the same way as the riders did. YIKES. What a way to make a living!

Leaving Casper for Wilson, Wyoming and a cup of coffee with my former client and former owner of our “home.” I did not need to send George the Cousin Eddie clip. He has BEEN Cousin Eddie before!

← Wandering not-quite-aimlessly ← Cowboys and Bus Mechanics
Next Up

Click here for the Thought Of The Day... [caption id="attachment_2926" align="alignright" width="300"] With our Benefactor - George[/caption] Leaving Casper, we…

On the way to our Eclipse-destiny, we made several significant stops. First, Ogallala, Nebraska. There we visited the Kingsley Dam,…