Our next stop as we headed south was Raleigh, NC. A place where RV WHERE YET’s Left-lean would not be noticeable…and another place we had heard good things about, so, time to explore!

The first thing we discovered was a GREAT RV Spot at the North Carolina Fairgrounds. This is close-in to the rest of Raleigh and relatively inexpensive. And, it turns out, REALLY NICE. Both for the camping itself, and for all the activity at the fairground! This included a Horse Jumping Competition, a Flea Market and a Dog-Agility/Racing show. These require some comment…

I can appreciate after this experience how our international friends feel about baseball!!

With regard to the Horse show – we know very little about horses, and even less about Jumping Competitions. As near as I can tell, here is how it works: A horse comes into the arena, randomly jumps over several (but not all, and not in a defined order) obstacles. At the end, people clap, and an official announces something totally unintelligible over the PA system. After which people clap some more. I am sure there are more details that were not apparent – I can appreciate after this experience how our international friends feel about baseball!!

The Dog Races were a LOT more approachable. These are apparently a new “thing” called “Flyball.” I looked “FlyBall” up online – you cannot make this shit up!!

This is, we learned, a 4-dog RELAY RACE. Teams of dogs (often mutts – no special breeding involved) race up and down a track against the clock and another team. There are several jumps and a sort of tennis-ball launcher at the far end. Dog must run down, over the jumps, push a pad to launch the tennis ball, catch the ball and bring it to the handler at the other end (over the jumps in reverse). After returning, the next dog in the relay repeats.

That the 4 dogs on a team can stay focused on the race and not get distracted by the hundreds of people and the other dog team (8 dogs in total on the track) is SPECTACULAR and IMPRESSIVE.

We spent 4 nights in Raleigh, and there was other stuff, beyond the fairground offerings to appreciate… We are feeling very aculturated, Southern-wise, after our NASCAR time in Charlotte, but CLEARLY we still have things to learn. Which is good, because as soon as we STOP learning, we’d have to move on!

Our southern edumacation, at least in the realm of gourmet comestibles, continued at “Pam’s Farmhouse.” This is a local favorite serving southern, “Comfort” food. In this case, a fully tatted and pierced Southern Belle (she actually WAS charming and soooo friendly) offered me several versions of the standard side-Grits with my eggs. I have not figured out the whole “Grits” thing, yet.  She asked me if I wanted plain, Cheese or Red Eye Gravy on them – I asked her to ‘splain the latter.

Red Eye Gravy is created from ham grease and coffee, she said – just what everyone needs to get their motor running! YIKES.   She said “It comes on the side, — A Little goes a long way!”

On the fence about this, I sent a pic of these particular Grits to Cajun friend and College buddy Keith Cambre, who’s only comment was, “I don’t think we ever do them like that in Louisiana – GOOD LUCK WITH THAT!”

As it turned out, Red Eye Gravy did NOT come on the side, but rather in the middle, in a cup that made the dish look like one panel of an Andy Warhol sunny-side-up egg.

And, it was not nearly as bad as you would think – of course, how could it be? At the end of the day (and the dish – I ate them all!), this yankee has still not fully boarded the Grits Train.

And, while we are on the subject of HEALTHY southern fare, I should discuss our experience at Coopers BBQ (since 1938) in Downtown Raleigh. The BBQ was quite good, but it was the sides that struck us. LITERALLY, if you ask Liz’s cardiologist! With the generous portion of French Fries, that accompanied the BBQ Samich, there was a added pile (a side-side?) of what I know as CHICHARONNES.

Just to be sure we had enuf oh-so-healthy, fried stuff in our diet!

And, we discovered a divide MORE significant than that between Republicans and Democrats; between the North and South during the war of northern aggression; between Cubs and Sox Fans – The GREAT BBQ SAUCE DIVIDE.

It seems the State of North Carolina is irreconcilable over that MOST significant choice: whether BBQ Sauce is to be made with Tomato or Vinegar. I have to say, I have a greater appreciation for the Tomato variety, but that’s because I GREW UP WEST OF EVEN WESTERN North Carolina. I am starting to appreciate the vinegar option, tho.

The Raleigh/Durham/Chapel Hill/Wake Forest area is pretty amazing for a lot of reasons. More PHDs per square mile (and per capita) than almost anywhere else – including Silicon Valley. This is due in great measure to the presence of 4 significant insitutions of higher learning within a 50 mile radius – Duke, UNC, NC State and Wake Forest. And the gravity of these attracted and continues to attract high-tech industry and associated highly-educated employees. And a generally progressive (liberal) political orientation in the immediate area, at least. And even not just a “regular” Microbrewery, but an “Experimental Taproom.”

We endeavored to experience the “vibe” of the various campi. Our first impressions, which may well need further research and confirmation: UNC (Chapel Hill) wins, hands down. BEAUTIFUL old campus (The oldest State University in what was the fledgling USA when it was chartered). Lots of activity on a Sunday Afternoon. Students studying, of course, but also bars hopping, and people just wandering.

Duke, on the other hand, was unapproachable – literally! We could not find a free parking spot anywhere NEAR the campus – even at the visitor center. Mind you,  it was not CROWDED,  there were just MANY signs exclaiming the need for a permit sticker to avoid an inevitable tow.  UNSUBTLE.  I guess they don’t want people around who aren’t meant to be there – whatever that means. Or who can’t play basketball.

We did notice the not-necessarily-tongue-in-cheek rivalry at UNC. Most of the stores on the commercial street alongside the campus featured variations on “Duke Sucks” memorabilia. I ASSUME that the same sort of mechandise (in reverse) also exists in the Duke area – however since we were made to feel unwelcome there, we’ll never know! 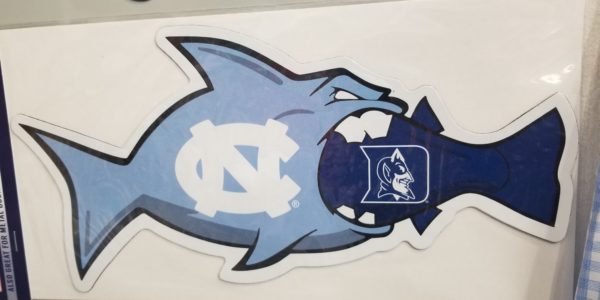 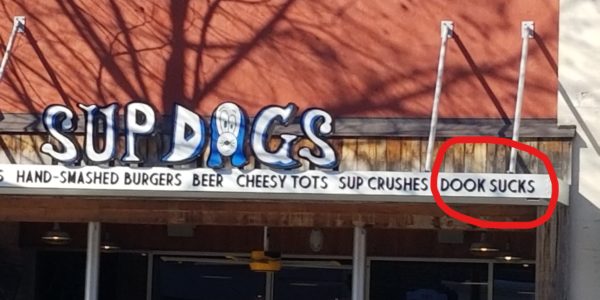 Made me think about my own Liberal Arts Education at Carleton College, way back when and getting way-er back every year! AT the time, and thru much of my life, I felt College was instrumental in forming my rational and social morals and character. Would I feel so positively about it at $50k/yr? To be honest, I now feel the trajectory of my life was affected more by the people I met and friendships I still continue to enjoy, more so than the institution that collected us together and the curriculum it offered .

I feel like that pricetag may skew the ability to attend across a diverse group… If I went to school today, would I want to only associate with folks who can somehow manage $50k/yr for the privilege? We meet OUTSTANDING people every day – many without two nickels to rub together. I think it would be hard to justify $50K per year. And, PARTICULARLY since I question the relevance of the actual, “traditional” college education that tuition buys in today’s “just-in-time” and online learning world. For many, Trade Schools or even apprenticeships make a lot more sense and probably would for me if I were matriculating today!

As an extra treat,  the aforementioned College Buddy,  Keith Cambre said he had an Uncle living in Durham.   The other Uncle-of-Keith’s that we know (L.C. Cambre) has entertained us several times on our way thru Louisiana;  Keith said Ned would appreciate a beer and a story, and perhaps tell a few of his own (if we were willing to meet him, Keith said).  Turns out that was a SUPREME understatement.  Not the appreciate part;  the story part!  Ned has worked overseas repeatedly for MANY years — for Honeywell,  for The European Space Agency, as an engineer and as a Professor, and more.  From Japan to the Netherlands and had several hours worth of stories to tell!

Its always the people, even more than the places, that we enjoy!

And, finally, we discovered again the kindness of strangers. It turns out that the Bus’s air-suspension was NOT acting right after the freezing experience at the Burdettes. One of the Air-valves was definitely bad – stuck open, so the bus was leaning badly. MAYBE a coincidence; maybe NOT a result of freezing OR the Burdettes at all!!! These valves fail, and I carry a couple spares. The fix is easy, but getting under there is hard, so I went online to find a truck place to do the work. I found that, and more!

The closest place was called “THE TRUCK SHOP” and was only a couple miles away. I made an appointment with the proprietor, Jim Matthews, for first thing in the morning on departure from Raleigh. I knew this repair could not even take an hour with a lift. When I showed up, we got WAY MORE than I expected!

Turns out, Jim is a retired Firefighter, and the TRUCK SHOP is sort of a hobby-garage. He does work on trucks, but not really to make a living! He took a look at RV WHERE YET, and motioned to a bay with a pit – said I was WELCOME TO CHANGE THE VALVE MYSELF. He could do it, but really didn’t what to…

Most places won’t even let customers IN the shop,  much less in the pit, with a wrench!

This is an easy repair – just hard to safely get to that valve parked in an RV Campsite. Over a pit, EASY TO REACH!!! I said I would change to my grubby clothes and get right on it! (Or, more accurately, UNDER IT!).  Jim said: “You don’t need to change – no grease back there!” I told him he had NO IDEA how easy it is to get dirty under ANY PART of RV WHERE YET! And I set about to prove it!

An hour later, I was done, and unrecognizable under the grease and dirt my clothes were covered with!

But wait,  there’s more!!!  While I was in the process of changing the valve, Jim came down into the pit to see Whassup (RV WHERE YET is in fact “UP” from the pit’s perspective!). He noticed a missing bolt on the PANHARD Rod.

For reference, this is the ONE PART that RV WHERE YET shares with 200mph NASCAR machines (about which I am now an expert, having visited the Hall of Fame). It is a suspension part that keeps the rear axle and drive shaft in place under the frame.

That bolt has fallen out before and I even carry a spare! So I replaced it. TWO PROBLEMS SOLVED, one I did not even know about.

As I was getting ready to pull out, I asked Jim what I owed him. He waved dismissively. I gave him $50.

Next destination: the Outer Banks of North Carolina!

← Frozen (And NOT the Disney version!) ← In a Place where the World Changed…
Next Up

In a Place where the World Changed…

Our meandering took us next to a place that was best (for us) visited during the off-season. For a whole…

Frozen (And NOT the Disney version!)