From NOTL, the McDowell and Harris nomad nation broke camp and headed for Ottawa,  where longtime friends  Fidele and Blair Davidson reside.    Too far to make it in one day,  we settled on a little town called “Cobourg” on Lake Ontario.

Mike and Fran selected an RV Park in the Marina right on the Lakefront for their overnight.  The Sec’y of the Treasure selected a (free) Walmart across town.

Not totally sure which was the “wrong side of the tracks” but both worked well for the purpose.   Dinner on the grill WAS agreed to be at the McDowell’s beautiful Lakefront location;  however we acquired the chicken for said BBQ at the Walmart.  So,  regardless of which spot was “better,” both were essential.

Onwards to Ottawa; Just as with others along our road, we have seen the Davidsons for many years in the context of business travel and consider them friends, so it was fun to connect when there can be no business on the agenda (everyone involved is now retired!).    I can’t say the people we see from our past lives are “different” than their personas as presented over our previous connections. Perhaps a better way of putting it is we are deepening and broadening friendships “free of business contention or pretension.”

Blair and Fidele assured us we (both – Harrises and McDowells!!) would fit in their drive,  and they had electric hookups.   I knew they had a largish 5th wheel trailer,  so I expected little of “The Look” when the bus pulled up, and none was observed.  Their neighbors may have been “impressed,” (frightened? Panicked?) though they had no doubt been assured we were not staying long.

In other places along the road,  we have found that “nervous Neighbors” could be calmed with margaritas,  so I played “Roll out the Barrel” on the horn by way of invitation!

I DID observe a culvert leading to their driveway.  I asked about weight,  and Fidele said not to worry.  We made it into the driveway and parked.  Later, Blair shared that he was not convinced there couldn’t be some culvert-repercussion tomorrow.  [Ed. Note:  there was not,  as of our departure]

The Davidsons had a previous commitment (Cirque-du-Soleil performance) our first eve, and had asked if we wanted to attend (if tickets could be acquired).  As we are after new experiences, and had seen limber atheletes in hypnotic, impractical and gravity-defying motion before,  we chose to stay at the Davidsons, where there was a spectacular, yet-to-be-experienced deck and pool.  Also rain (which did not stop me – and only me…the rest being weanies — from a dip in the pool,  but did discourage any deck-sitting).  A bit of TV,  including a Cubs game, until Blair and Fidele arrived back from the extravaganza.  We had the margarita makings ready, but collectively decided a Clamato on Ice would allow us to live another day!

There was considerable discussion about the merits of and strategies for winterizing RVs —  Blair and Fidele have been “fellow Travelers” (by trailer), so they know!  Mike seemed not interested in the coaching, technique OR the facts; but ONLY in who spilled the beans to the Davidsons about his (formerly) private winterizing problem.  TOTUS reminds us the USA is overrun with leakers and fake news, and Mike was hard on the trail of discovery!

I know that the Harrises were not a party to the leak. In fact,  Blair had asked ME about the issue before we had even arrived.  I told him that I was CERTAIN Mike knew all about “the pink stuff” but that I knew Mike preferred Chardonnay to Rosé.   Being Canadian, Blair said he would be quiet about this,  not wanting to offend Mike.

I said, “Why in the world would you do that…my whole relationship with Mike turns on offending him daily (and vice versa).”

Still needing a culprit, the witch-hunt continued.  Ultimately, Fran (with a smirk) would neither confirm nor deny admitting to the Davidsons that the McDowells had been delayed by an “antifreeze issue.”  The Leaker had been exposed! That the leak was related to “THE LEAK” is ironic,  don’t you think?  That the Davidsons would assume this meant MIKE’S fault and not Fran’s  may have been bigoted and presumptuous, but totally accurate as well.

The next day,  there was a full agenda of seeing new and fantastic “stuff” in Ottawa.  This included a walking tour of downtown Ottawa, around parliament and other sights one would expect in the capital of Canada. Lunch at the market.  The Canadian History Museum. 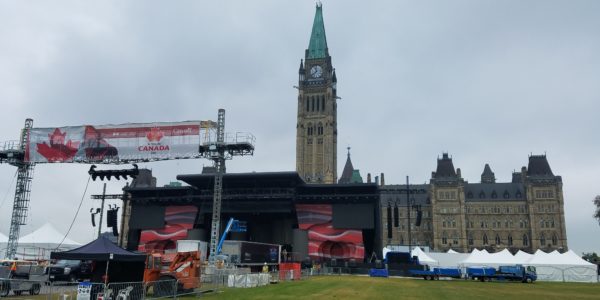 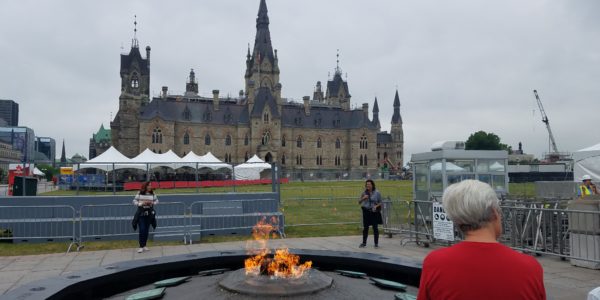 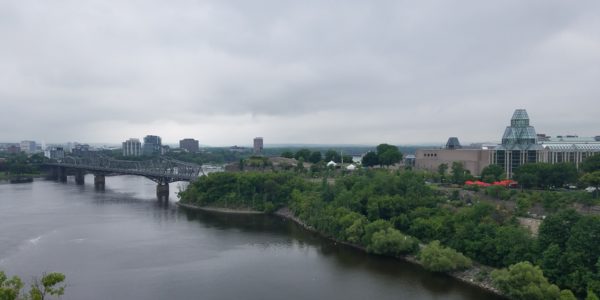 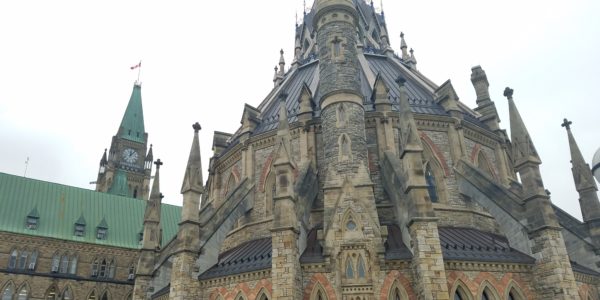 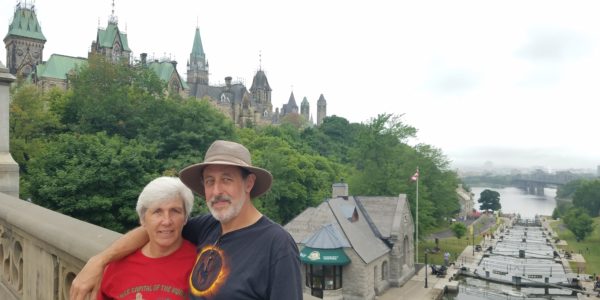 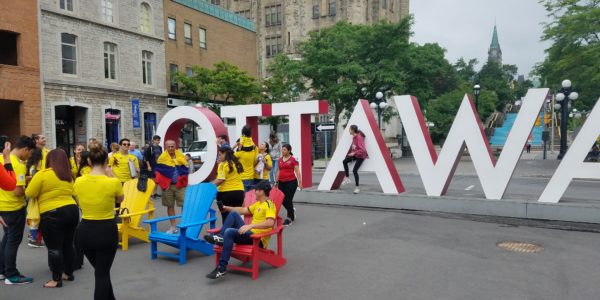 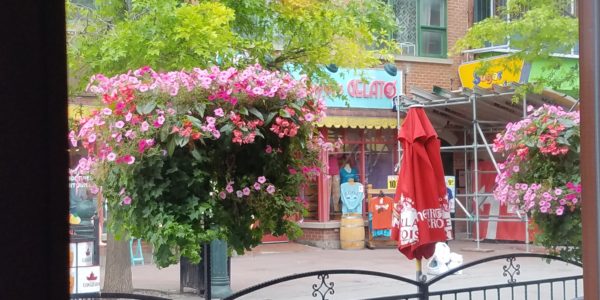 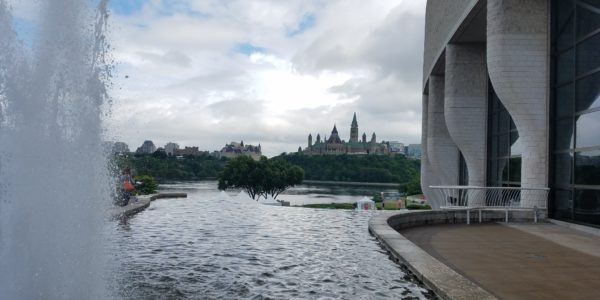 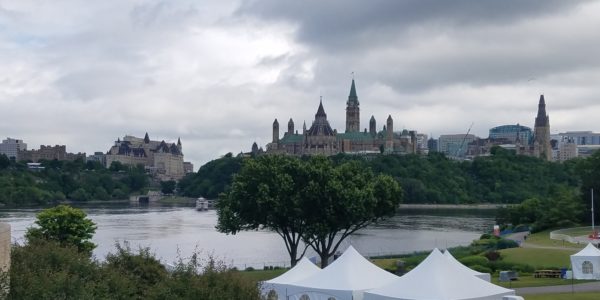 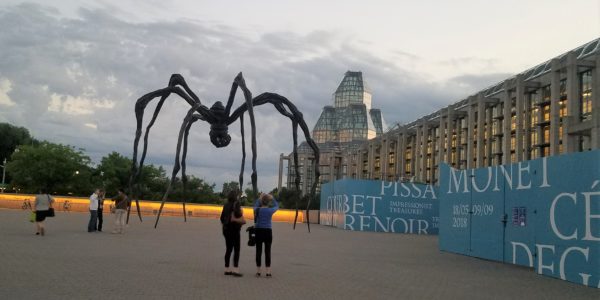 Notable among the sights:  The new USA Embassy…a butt-ugly building if ever there was one.  It’s in a SPECTACULAR location near parliament and the Ottawa River;  a grey-ish tower that was vaguely reminiscent of a beehive.  Or perhaps the cooling towers at Three-Mile Island.    The building takes up the better part of a block,  and is surrounded by a double ring of Bollards for security (after all,  Canada is a Security Risk these days).  SOOOO much could have been done on that site, with infinite resources and even finite taste.

We were in Ottawa for but a day,  however we did have some very fortunate luck.  We were treated to a sunset performance of the Royal Canadian Mounted Police “Musical Ride” Equestrian team.   This is an elite RCMP riding team that appears all over Canada,  and happened to be in Ottawa coincident with our visit.  The day started a bit rainy,  but the weather cleared into one of those postcard summer evenings just as we parked in the field next to RCMP headquarters. 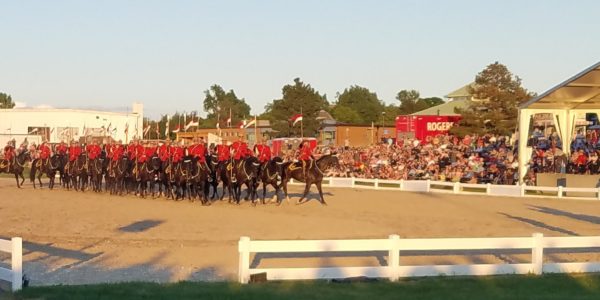 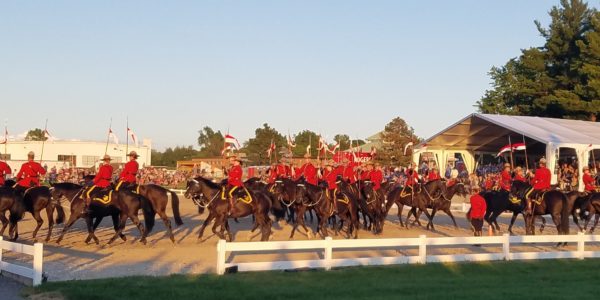 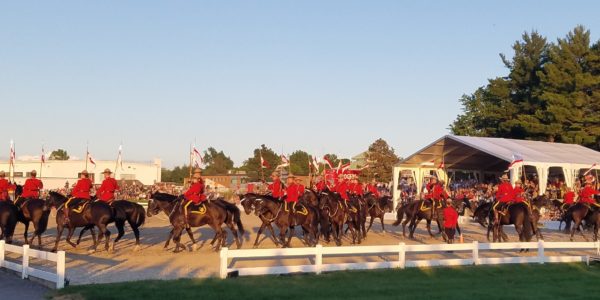 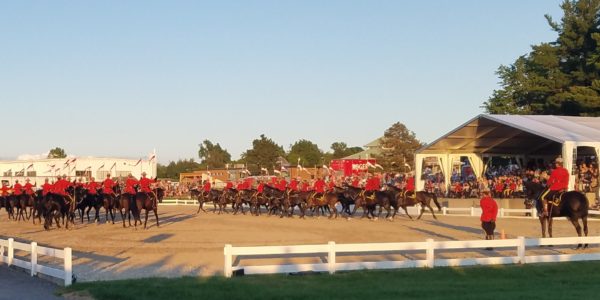 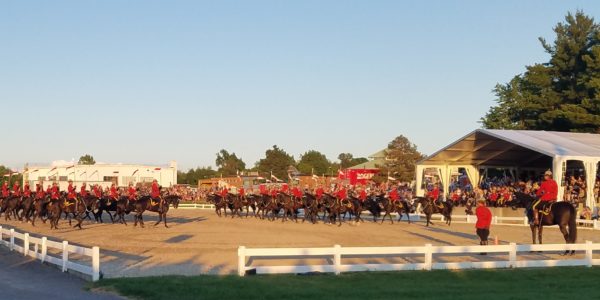 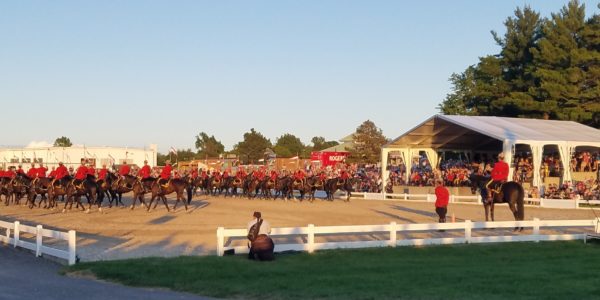 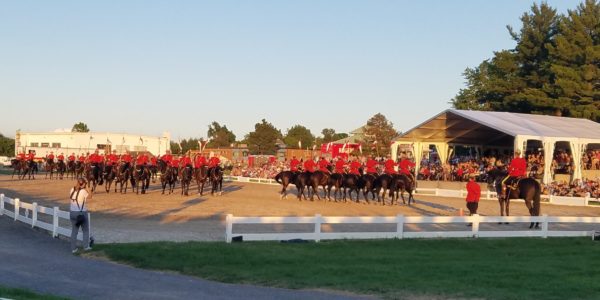 The show began with the Governor General’s Foot Guard Band,  continued with an agility-course contest for police dogs, some Dressage exhibitions, a pipe and drum performance and then by the RCMP horse teams.   WOW.

And all of that followed by a VERY MOVING ceremonial lowering of the flag at sunset with the assembled crowd singing “O Canada” (of course) and the sky a radiant Orange and Pink.    All I could think was our guy wants/believes tanks on Pennsylvania Ave will inspire.  Liz and I were ready to emmigrate to this “Special Place in Hell” on the spot!

One thing struck me as we visited the Canadian History Museum and the RCMP Musical Ride:  The relationship the Canadians have with their First Nations peoples is evolving, and WAY more complex (and respectful?) than ours,   south of the 49th.

There is still a history of relocation and reservation and treaties that were signed for “peace” but were surruptitiously used to transfer vast swaths of land to settlers.  HOWEVER, there does not seem to have been as much outright slaughter of First Nations populations.  Instead,  both the French and British seemed to understand that it was better for everyone to have cooperative relationships – tho perhaps that was because timely alliances one way or another helped tip battles and wars between European Colonial powers.

And the situation today seems to recognize the fundamental belonging of much of Canada itself to the First Nations population, who themselves don’t believe land can be owned at all.   They believe that what treaties were signed were First Nation recognition with the Europeans that all agreed to share in the use of and care for the land; a commitment that the Europeans did not mean nor honor.

For example, the RCMP performance began with a welcome by the First Nations leaders to collected guests gathered at the “Traditional and unceded lands of the Algonquin People” which is Ottawa!  To be sure,  there are still unreconciled differences and inappropriate historical (and present) treatment of First Nations…it just seems the Canadians are at least discussing this and are farther down the trail of reconciliation than perhaps, sadly,  we will ever be.

Can you imagine any scenario where Manhattan would be acknowledged as being “Unceded and traditional lands of the Lenape People.”

Leaving the Davidsons the next morning,  Blair insisted RV WHERE YET’s  horn be sounded.  The neighbors seemed amused,  mostly by “La Cucaracha.” I deduce this from the fact that we did not have another audience with the RCMP.  We worried about it, but as far as I can tell,  our visit to Ottawa did NOT result in worsening of relations between our countries.

Despite the widespread expectation in Canada that Sunday 1 July would bring higher by 10% prices on many common goods due to tariffs — AND despite our horn —  the current political climate and attitude was surely not reflected in the hospitality shown us by our hosts,  their city and nation.

So, now onwards to Quebec, where we are staying near Joe Havas’ cottage north of Montreal and in the vicinity of Mont Tremblant.

5 thoughts on “Hospitality in A Special Place in Hell”

Off the Rails More Than on Them

Thot for the day if you just turned 60...(click here) Our scheduled appointment with destiny and McDowell was intended for…