Skip to content
We need a name for our Chicago Home…help us out!

Our “Home away from Home” has become our home. So that means our home in Chicago is our ???    We need a name; help us out!

Well, for sure it is where we have a lot of friends…and we swung thru to enjoy our Block Party with many. This included parking the bus in front of the [new name here], putting out the awning and chairs and becoming part of the party. Some walked up to the windows, hoping to order a Taco…

In any case, a great time…grilled stuff, donations from local restaurants, a water slide for the “kids.” AND, two evenings when we could grab a Burrito!! Did I mention that the best burritos in the world are in Chicago, near our house? 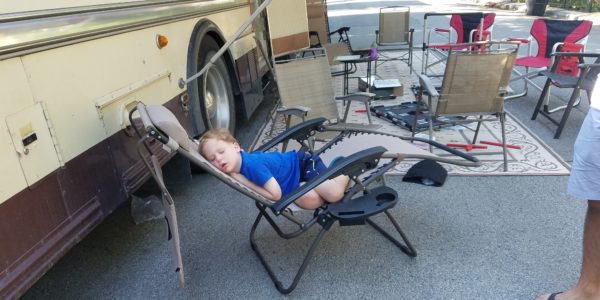 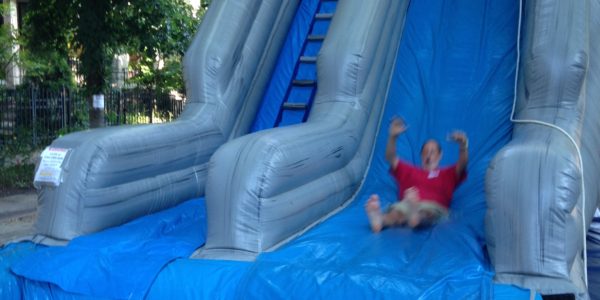 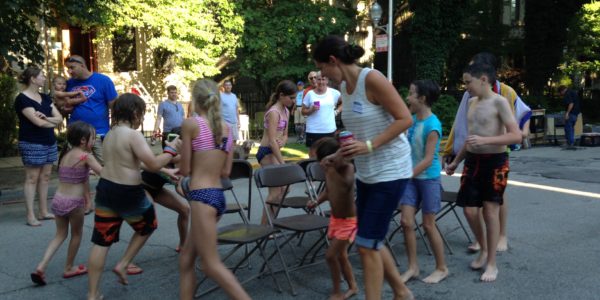 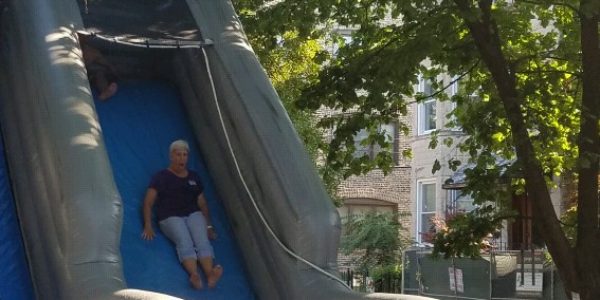 Heading out again…westward bound. Our last couple of stops have been memorable in a small way. First things first, we decided to visit our furniture… Say What?!

When we were going thru our major downsizing at our Chicago home as part of moving downstairs to 700 sq. ft. from upstairs 2,500 sq. ft., one of the challenges was to eliminate in an efficient and environmentally friendly way most of our furniture. As it happens, Liz’s nephew had just purchased a house!! So, in a couple of waves, Liz and I made available all of everything for them to choose from. They choose widely and wisely. Bunky is also setting up a shop, and will over time acquire most of my tools!!

It was strangely comfortable to arrive at their house and be welcomed to sit on our own familiar couch!  No,  for the record, not in my underwear, to watch TV. That would be weird.

Before we stopped in Rockford, we gave old friend Steve Sawatski a call. The Sawatskis live in Huntley, a stone’s throw from the highway that leads to Rockford. We navigated the bus down his street and parked, much to the chagrin of his neighbor.

We are getting pretty familiar with “that look” on people’s faces…so Liz yelled, “We’re not staying…” and played the musical horn for Steve (“La Cucaracha,” I believe, which may be what the neighbor thot we were…).

Steve explained that that particular neighbor’s full entertainment in life consists of sitting in his garage and from there inserting himself in everyone’s business. Still, I think he was happy we pulled away after an hour or so of conversation. The neighbor. Though perhaps Steve, too!

Also in Huntley we stopped to visit one of Liz’s cousins home – Bertie and George. Good to catch up!

From Rockford, we headed to Monroe Wisconsin. We selected this little bit of bucolic rural Wisconsin for a stop-over because friend Rich Beem grew up there and was going to be in Monroe that particular weekend for his High School Reunion. I won’t mention which reunion but suffice to say, multiple decades have gone by.

In Monroe, we stayed at the County Fairgrounds, where the caretaker, Gene, helped us pick out a GREAT SPOT next to one of the Livestock Sheds. The shed could be used for shelter in case our planned picnic with the Beems was rained on. The previous weekend had been the County Fair…so the barn would have been full (as well the campsites). Since it was now empty even of the obvious and expected accumulation from livestock, we had a plan to move the picnic table in there for DinDin. I am kinda disappointed it did not rain to force this…THAT would have been one for the resume!

Monroe turned out to be AWESOME. In ways that we most likely would not have discovered on our own. Rich’s brother Dave and Brother-in-law B.J. came to our BBQ. Then Dave suggested the “Corner Café” for breakfast. This was A PERFECT place…Liz and I like to treat ourselves to brekkie a couple times a week. In the Old (working) Days, this would have been Saturday and Sunday; however, these days the specific days have little meaning. Instead, it happens when we are near a little diner or local, unfancy breakfast place. These, Amy’s Corner Café certainly was!!!

After leading us on a walking tour, Rich suggested a few things to do. The old Huber Brewery (now owned by a couple of Canadian Brothers named Minhas) is available for tours. There is also a craft brewery in nearby New Glarus. We did both! Quite different!

The former an old beer factory, producing millions of barrels a year. See the process. Talk to local Wisconsin folks who malt the barley, add the hops, run the bottling line, and have done these jobs for YEARS (some, perhaps, for almost a century!). The latter is every bit a craft brewery that has been very successful. Beautiful taproom and beer garden. Very new and sparkling. All the workers are YOUNG (i.e. just past college age). Both awesome in their own way. 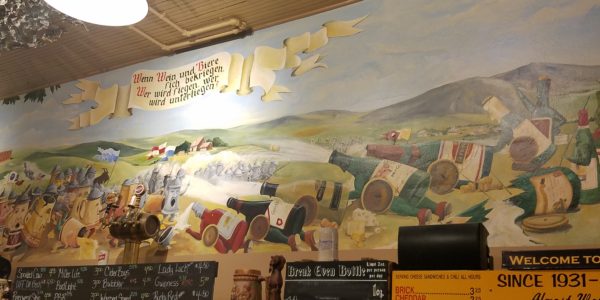 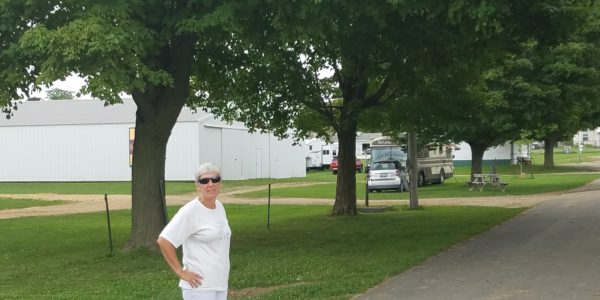 A couple of other “Must Dos” were imparted to us by Mr. Beem. Pancho and Lefty’s is the best restaurant, so dinner there. CHECK. Next, Baumgartners —  an old fashioned restaurant/Bar. Headed over there (several times, if I were to be completely honest…). AWESOME PLACE. Over 100 years old. Just what you would imagine for a Wisconsin Bar. Beer (lots of them) and Cheese Sandwiches. Cold, home-made Cheese Sandwiches on dark rye bread.  The Cheese AND the Sandwiches are home-made.   Liz asked if they would grill one. No, dear. Cold.

At Baumgartners they have a bar-game (to take tourists’ money, I suppose). You roll up a thumb tack into a dollar (or bigger!) bill. Then, using a roll of three quarters for weight, and folding this all together in a particular way, you toss the wad up at the 16-foot ceiling. It is supposed to stick there.

The servers demonstrate –and they make theatre out of it. Each failed attempt is met with boos all around. After 3 FAILS, the server is replaced with another.  Only for the tossing…I think they keep their job. With success, a bell is rung.

5 tries by two staff before the wad stuck (with my bill, of course).  Then it was my turn.

More than a little nervous, The Secretary of the Treasury provided another of our bills to be placed around a carefully selected thumbtack. I applied the quarters. Drank the rest of my beer for courage. Prepared to toss. (The bill, not the beer). Mine stuck ON THE FIRST TRY… According to Mr. Beem and the staff, the next steps in my thorough “Wisconsinizing” would be to root for the Packers and Brewers. WE HAD TO LEAVE MONROE IMMEDIATELY, before that transformation could complete.

BTW, every couple of years or so, Baumgartners takes down all the stuck-money and donates to various charities. Last year, this amounted to OVER $13,000!!!

Thot for the day: If Baumgartners were in Canada, their donation would have been WAY MORE. Not because of the exchange rate, but because their $1 and $2 currency are COINS which are hard to put a thumbtack thru. Minimum cost for entry into this game in Canada would be $5.

6 thoughts on “Home vs. Home-Away-From-Home…”

← Trono (AKA Nirvana) ← (Continuing) Westward-ho
Next Up

From Monroe we spent a few days in Minneapolis. There, we visited family, and helped Mom with some stuff. Helping…

[caption id="attachment_2770" align="alignright" width="300"] There actually IS a Hindu Temple near the Campground, so maybe this IS Nirvana?![/caption] A couple…