We finished our run in NewfoundLAND and Gros Morne with some local social events. First, we went to a highly-regarded family restaurant for some Newfie Delicacies. We had Fish and Brewis, Cod Tongue and the eponymous MOOSE BURGER with Newfie-style fries. Where to start in ‘splaining those!

Fish and Brewis is Salt Cod (the old-fashioned way Cod was preserved – salted heavily and dried), soaked to remove SOME of the salt. Add to that some reconsituted Hard Tack (dried out bread-roll) and fry together with some salt pork. Serve with Lassie Bread (fresh-baked white bread covered with butter and molasses). You can imagine this served on a fishing boat – all components would survive MONTHS at sea.

Sounds DISGUSTING. It is actually quite tasty!

We were told the function of the Lassie bread was so that the Fish and Brewis  would at least taste good the second time (after you burp it up…).

Cod Tongues are quite the delicacy. This particular hunk of the mother fish (which Newfoundland celebrates as its legacy in every way possible) is small, expensive, pan-fried with a little breading and enjoyed! Texture reminded us a of Calamari – a little tough and rubbery vs. the flakiness of the rest of the Cod. But very nice!

And Moose burger with Newfie Fries. I have explained Moose many times. Just wanted to add two things to those explanations: 1) People eat hardly any beef here…Moose is plentiful and free (and better for you…very low in fat); and 2) The taste of Moose burger ranges from delicious to pretty gamey.

We asked why and were told: “Depends on the moose.” No explanation or apology. It can be a tough old bull or a tender young cow; and even that does not directly correlate with the taste. You pays ur dolla you takes ur chances.

I now order (and relish) it as a Newfie would…all in a pile.

Newfie Fries are a version of Poutine, I suppose. Nicely done, crisp fries with a brown gravy and hunks of “Dressing” covering it (no cheese curds, so only poutine-like in appearance). The Dressing is crumbly and tastes like what you would serve with a pork roast or stuff a turkey with. The whole combination sounds bizarre…the first time I ordered it with the Gravy and the Dressing on the side, not sure of the effect.

We asked the waitress at the restaurant where we should go for the evening’s entertainment. We had heard about a “Kitchen Party” (more on that in a minute). The waitress IMMEDIATELY suggested a benefit event put on by the Lion’s in a nearby town. Music, beer, locals. All we needed to hear!

And the festival did not disappoint. We were WARMLY welcomed, the music was danceable (though in hiking boots on a gravel lot, not quite the best for busting ballroom-moves). The weather was even quite nice for an outdoor event – it was cool, and not rainy (the Newfies were sweltering, however). We met several people, including Michelle, who was selling beer tickets, and Kim, whose husband is actually the “star” of the Kitchen Party we considered before hearing about the benefit.

Kim told us there was also a Kitchen Party (starring her husband) the next night…she hoped she would see us there! We did stop by, to discover the kitchen party “star” is really everyone in the kitchen.

Odd Newfie Musical instruments were handed out, which required little skill or training to make noise with.  All US citizens were required to sing “Country Roads.”

The Microphone was open for anyone to sing or tell a story.  One fella, obviously his “Big Jib Drawing” quite well by then, told some pretty off-colour stories.

Our last night on “The Rock” coincided with the New Moon and the Perseid Meteor Shower. The Dark-Newfie-Sky did offer some viewing advantages; however it was mostly cloudy. At one point, a “hole” opened up just in a good spot for viewing, and some meteors were seen.

Eventually, we had to leave Newfoundland. I wish I could say we would be returning soon…people kept telling us about festivals and fishing seasons and things to do at other times of the year.

For us, it is hard to justify going BACK to places when there are so many other places to see and experience. But Newfoundland WOULD be a place we COULD go back to. And I hope our reader (I hesitate to pluralize as there may be only one…Mom you know who you are) considers visiting.

Out of the way, but SO WORTH IT.

Our ferry left Port Aux Basque at midnight, arriving in Nova Scotia the next morning. On the way to the Ferry, we stopped at the Walmart in Corner Brook, which was Tom’s selected location to do the “Moose” deal. Convenient because we needed to do some shopping (it is a foreboding sensation to be in the middle of basically nowhere AND be down to the last roll of TP). We arrived about noon, only to find that the power had been out since 7:00 am in the whole city; thus Walmart was closed (registers did not work).

I called Tom, who was building a shed nearby. He came directly over with 4 moose-burger patties and 4 sausages. I offered him in return my LAST “New Glarus Spotted Cow,” explaining this beer could ONLY be procured in the great state of Wisconsin, USA. He thanked me profusely! He did not drink it on the spot (pun intended) due to needing to go back and work some more with power tools (he had a generator since the power was still out).

Eventually, the power was restored and we obtained necessary provisions (and TP) before driving onwards. The delay was not an issue – ferry departure was at midnight so we still arrived 3 hours early. Ferry passage was straightforward, as before, if not quite as comfortable. On THIS ferry there were no lying-down options; but there were plenty of comfy reclining seats with lots of legroom. The SNORE-FEST was the equal of our last passage; sleep was elusive.

Our arrival in Halifax was not without drama; however, at the end we met an actual ANGEL…really!!! A metaphysical moment was had. More on that in a minute; first the drama.

The Shubie Campground was one of those pretty-close-in places that we were really looking forward to. Arrival was easy. They showed us to our site, which is where the drama began. Unfortunately, the site they offered us was DECIDEDLY un-level. I was pretty sure we were NOT going to be able to stay, at least not on that site. I tried, with a combination of our jacks and wood to achieve some measure of level, but it was not safely possible. I told the staff, and asked if they could move us somewhere or otherwise accommodate this problem.

They were VERY full, so this looked to be a real problem; I also called some other campgrounds; none as close in, and most fairly booked. Also at this moment, the skies opened up – major (and not-forecast) rain.

The staff eventually proposed a couple options, which necessitated walking (in the pouring rain) to see each one (did not want to commit without judging levelness). In the end, they managed to rearrange some other reservations to put us on an EXCELLENT site. The staff here were gracious and really worked to make this happen; which we thoroughly appreciated. The move was accomplished, and we couldn’t have been happier.

But, that wasn’t even the “Angel” thing I alluded to (stay tuned for “the rest of that story…”)

Shubie (and Halifax) turned out to be a GREAT location for spending a week. The Campground is part of a larger park with a nice beach, walking trails, etc. Nearby (easy bike range) there is a shopping area with lots of shops and the best Walmart we have seen in a long while – great produce and a huge grocery area. Also several nice restaurants, including a Sushi place with excellent lunch specials (Sushi is not found much in Newfoundland – we have needed a “fix” for awhile). An easy drive into Halifax, and to sights we were encouraged to see in the surrounding area. 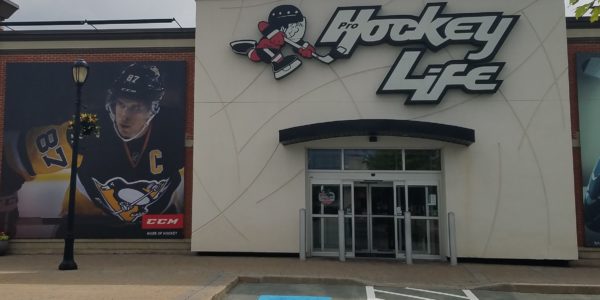 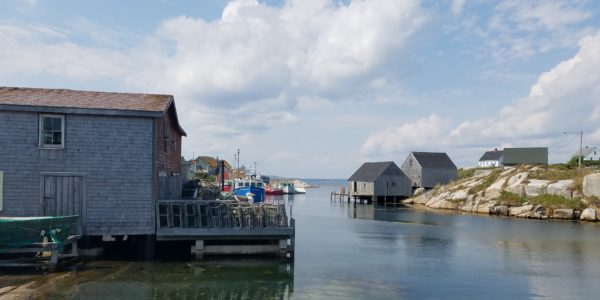 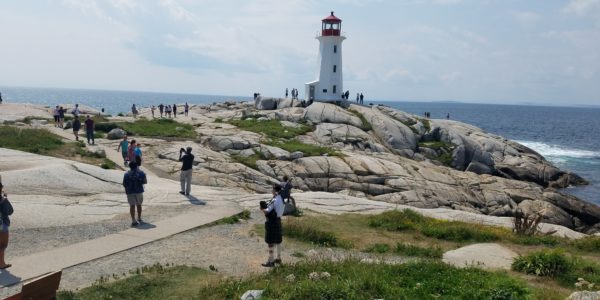 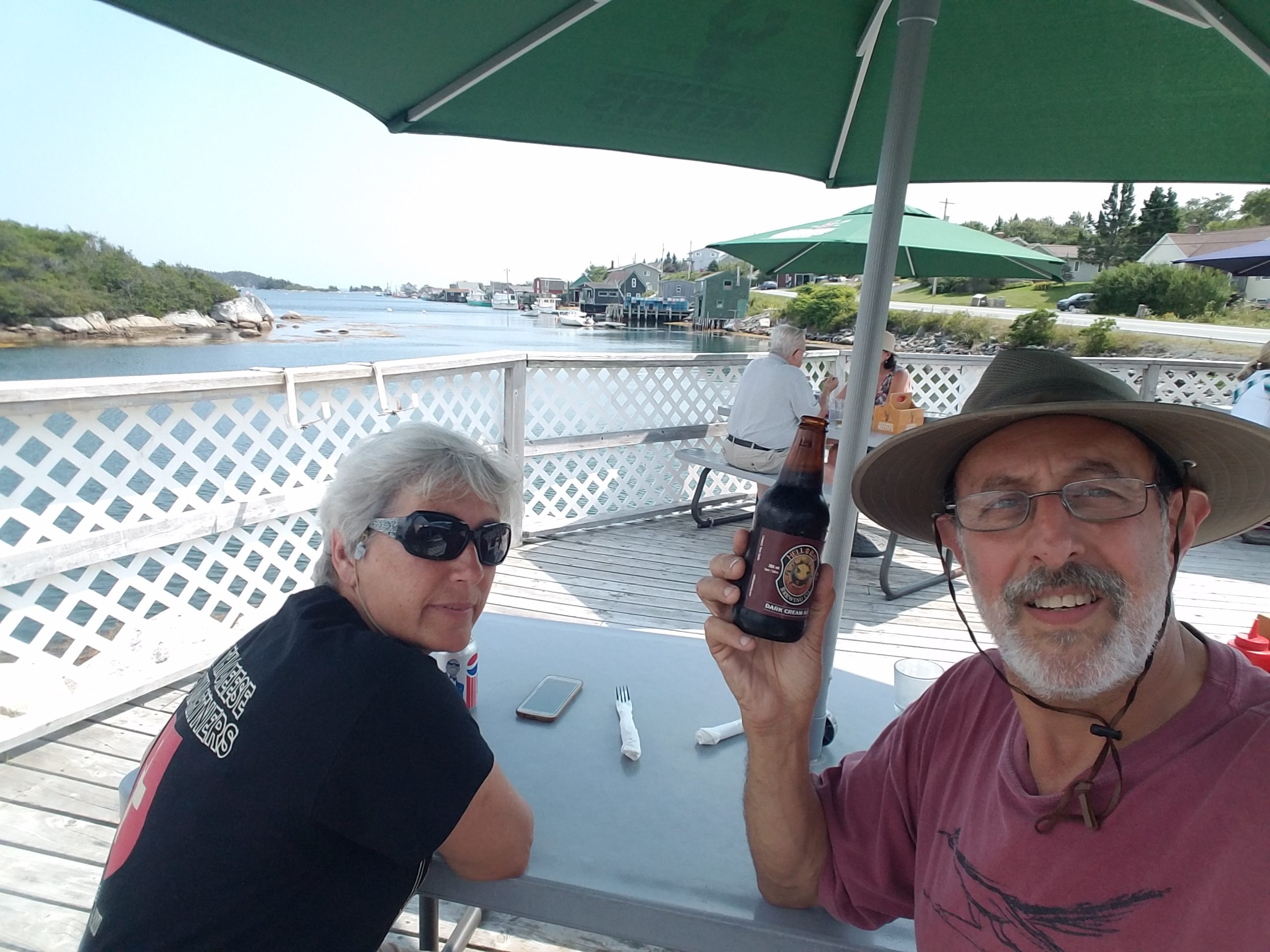 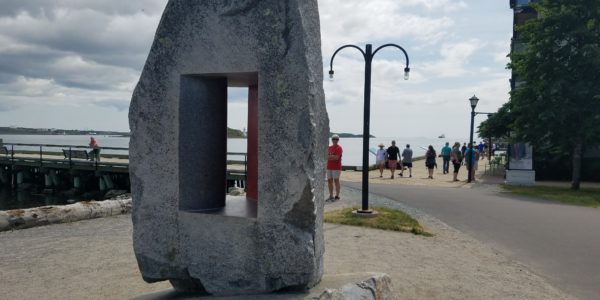 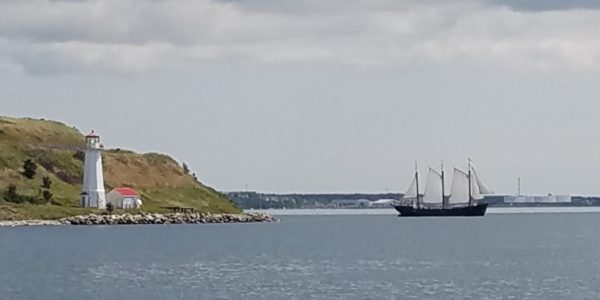 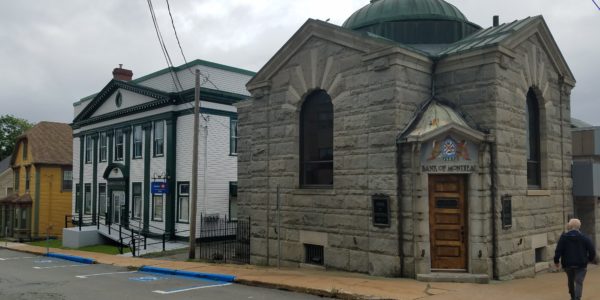 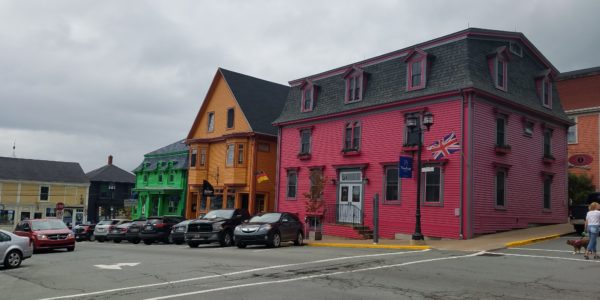 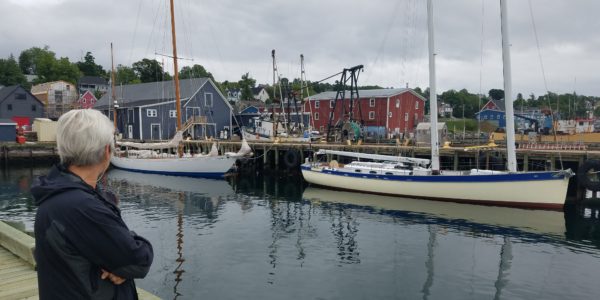 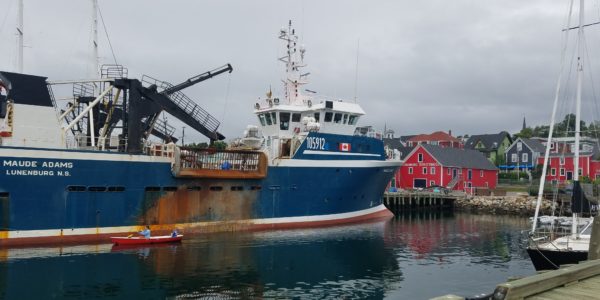 We either rode bikes or drove short distances to: Peggy’s Cove, the Shearwater Aviation Museum, Ludenburg,  Downtown Halifax (and the pleasure of a Donair for lunch).  A “Donair” is a meat like Gyros,  but made entirely from beef.  Served on a Pita like a Gyros, but with a sweetish white sauce.  Delicious.

Even a little history lesson (from a Canadian Perspective,  for sure) was offered.

Forgive me for sounding jaded, but our trip this summer has been SO SPECTACULAR that places we visit now are mostly “more of the same.”

In other words, they would be STUNNING if they were the FIRST place we visited, not the last-ish.

But, long enuf to have lunch at a place with a sign that said, “Lobster and Beer. Enough Said.” It was delicious!!

The weather did not cooperate for ALL the things we wanted to do in Halifax. There was a free music and culture festival on the waterfront…on a day that was predicted 100% heavy rain.

We chose, instead to do the Shearwater Aviation Museum (indoors) that day. We also stopped at a pub called “Your Father’s Mustache,” where a Blues Band was playing. We came to learn that the same band has been playing Saturday Afternoons for 25 years. MANY of the patrons in the pub had been coming for as long. Who would have thunk it…the band was quite good and the crowd quite welcoming.

I should also mention that we needed to make a couple of bus repairs and modifications. First, we developed a severe LEFT-LEAN completely unrelated to our politics. Now we had just replaced that leveling valve (in Deer Lake), so what could that be about? I crawled under the bus (well-chocked to prevent disaster) and discovered that the leveling valve actuator (which senses the ride height and adjusts by dispensing or releasing air into/from the airbags) had lost a bolt and was simply not connected. I carry a spare, and the change (including a lock-nut) took 10 minutes for an all-in cost of Cad$3.50 — US$0.37.  😉

I also reorganized the Bike Rack to make it sturdier and easier to mount and dismount them while still allowing space to reach the Diesel Tank for filling.

And finally (MOST IMPORTANTLY if you ask Liz), I completed the installation of a WINE RACK in place of a heater which we have never once used (preferring to be south of the Mason-Dixon line in seasons where heaters might be appropriate further north).  The heater itself is coveted by several other bus owners,  and I will bring it to the rallies we attend this fall to pass it on.

We rate Halifax VERY HIGH on places to visit – it cannot SOLELY be related to the fact that there was a Brewery AND A Dairy Queen within biking-range of our campsite. But I doubt we could have designed a better place to stay and all-around place to visit!

So, Dan, what about the Angel?

Someone told me suspense is a story-telling tool that builds interest…yes? Either that, or it’s a symptom of a scattered-brain, unable to hold a train of thought OR get to THE POINT.

1 thought on “Halifax (After a Newfie Last Hurrah)”

← Gros Morne World Heritage… ← An Angel in Halifax Clothing!
Next Up

An Angel in Halifax Clothing!

Our last full-fledged stop on Newfoundland was the Gros Morne National Park. [su_pullquote align="right"]Parks Canada does a GREAT JOB, and…