No,  that would be cruel.  I did want to talk a bit about our next (and last) stop in Canada:  Fundy National Park; but first, the angel…

No, First a Thot for Today…

Now,  for the Angel.  The first morning at the campground in Halifax, I was outside getting the bikes down when a woman came over to me.  Now my recollection may have been coloured by what was to take place next, but it seems to me she was GORGEOUS. Tall, athletic — looking like a fashion model in an outdoor catalog. The sun radiating off her blond hair (it could have been brown hair, or black hair or even NO hair — I truly do not remember),  creating, you guessed it, a halo.

Not usually at a loss for words (STOP LAUGHING!), I could only say, “Hello”
(but I was thinking I would be buying whatever she was selling!).

Now, it is quite common for people to come over to ask about the bus – it isn’t unusual to have 3 or 4 visitors in the first hour we are parked. This was clearly a different thing altogether.

She said, “Do you drink beer?”
It was 8 AM so I didn’t think she was inviting me to breakfast, but it IS Canada so I guess you never know…I hardly knew what to think,  and even less what to say.

She continued, “We are leaving today and can’t take it with, would you like our beer?”

Some of this was becoming clear(er), as I collected my thoughts and deduced that she and her partner were travelling in a rental RV, which they needed to return today, sans beer. I still had many questions; the main two were:

♦ Why ME?
Of all the RVs and all the people in the park, what is it about ME that made this woman SURE I was the right person to give beer to at 8:00 AM?

♦ Were The Gods of Canada Aghast?
…at the inconveniences we had experienced checking in to Shubie?
Canadians (and Canada) just DO NOT CAUSE INCONVENIENCE. Thus, they immediately dispatched an angel to make amends.

I am going with the latter – it is the only explanation that really makes sense to me!  Before the apparition could disappear,  I said,  “Why YES,  I drink beer,  and I would be GLAD to give yours a good home!”

I accepted the beer, and will hold it in reserve; to be used ONLY in case of extreme hospitality or other event requiring reciprocation of an extraordinary nature.

Surely sharing beer provided by an angel would rise to a level appropriate to thank the many folks who have showed us and continue to show us such kindness and hospitality as we travel!

We  wound down our time in Canada for the summer as the air started to turn a little crisper and people at latitudes above 49 degreees start to talk about autumn. It is our goal to ALWAYS stay at least a few weeks ahead of the white stuff.   But we are not leaving immediately; just headed in that direction – to Fundy National Park in New Brunswick.

The Bay of Fundy has some of the most extreme tides in the world.  The bay is funnel-shaped,  so for a given volume of water pushed by tidal forces into the big (ocean) end of the funnel,  the height change at the small end is magnified in the extreme.  A 3’ tide (pretty average worldwide) becomes 30’ or more!  We wanted to see this; Canada conveniently has a national park in the region so we booked 5 nights there and it was a short drive of 3 hours or so from Halifax.

The tides ARE the star of the show at the park.  At low tide,  fishing boats sit on the mud FAR from the water.  The beach extends ½ mile out and you can effectively walk on the ocean floor.  At high tide,  the boats are floating in 15’ of water and there is no beach!   One day we drove to nearby Moncton,  where the “Tidal Bore” is very evident.  This is a wave front as the tide moves up river twice each day.  The river is at the end of the Bay of Fundy,  so it acts as a further amplifier for the water being forced up the bay by the tides.  Each constriction in width and depth produces more exaggeration of tidal height and speed. 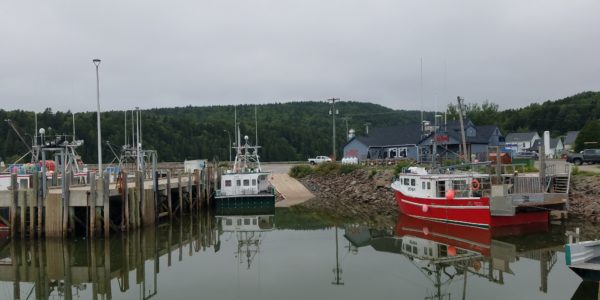 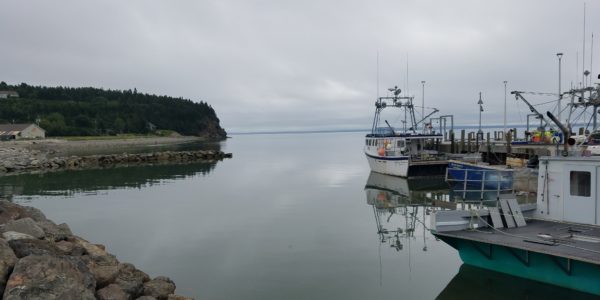 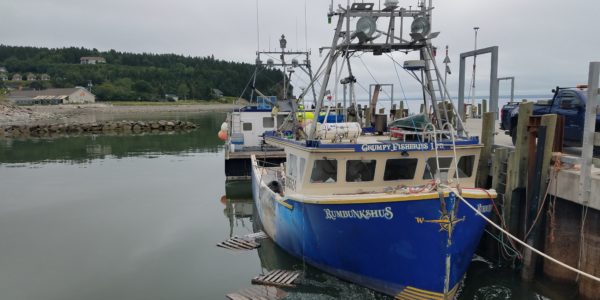 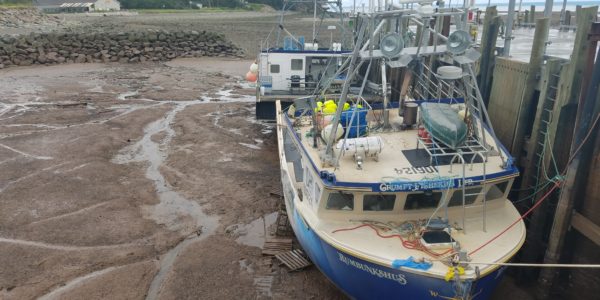 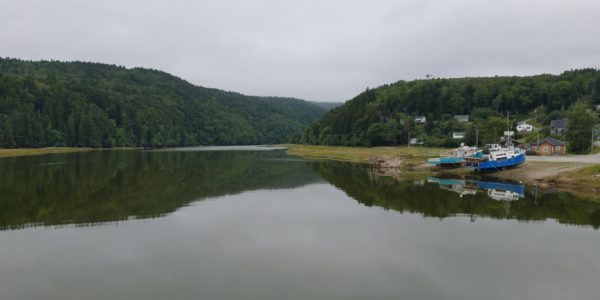 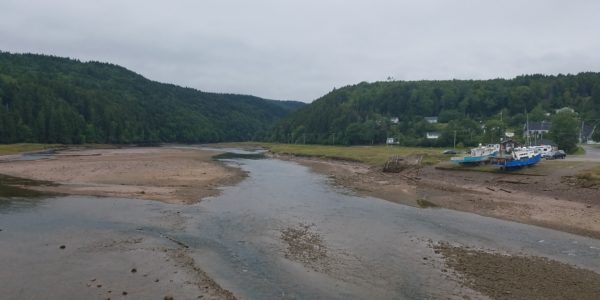 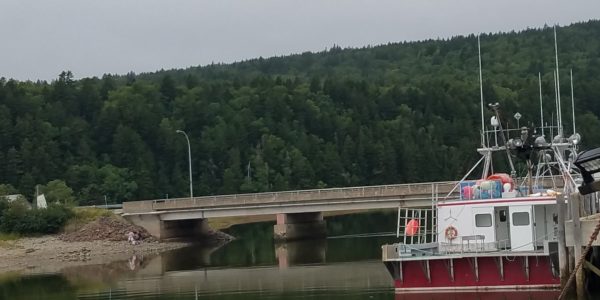 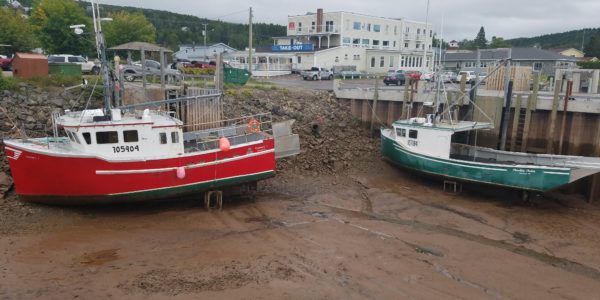 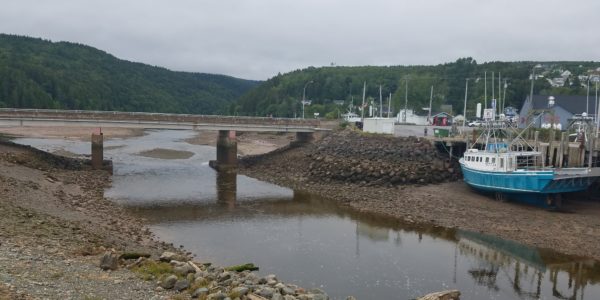 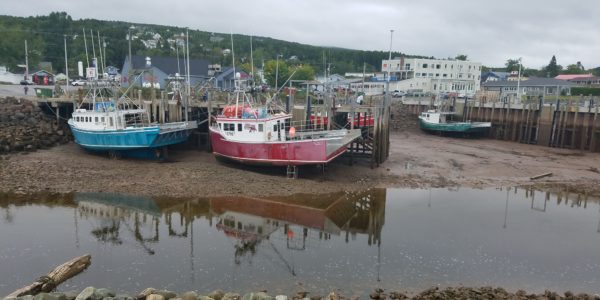 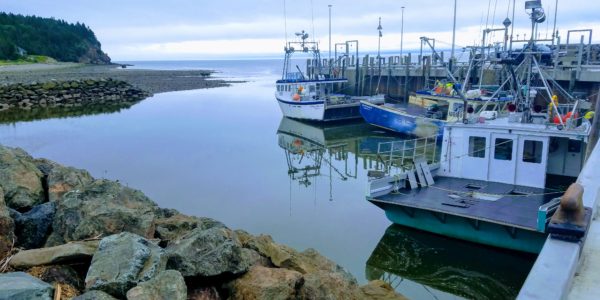 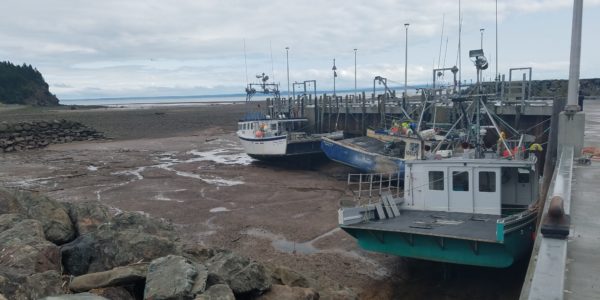 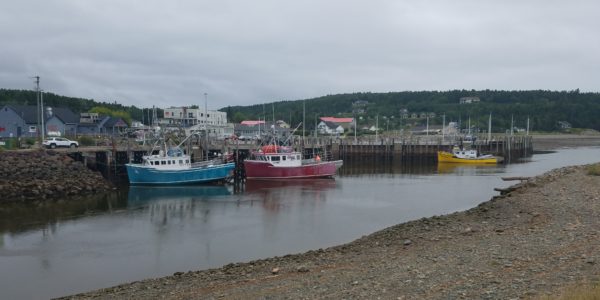 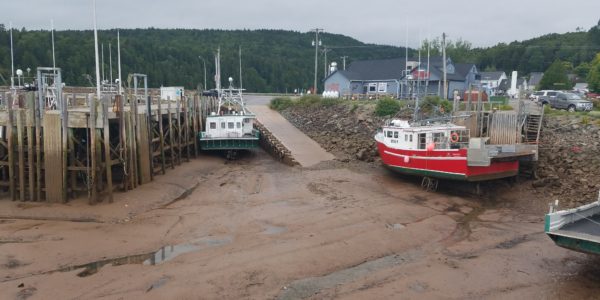 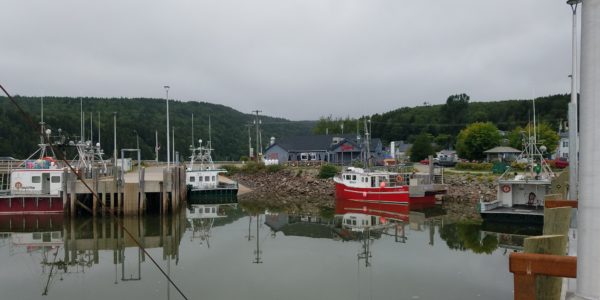 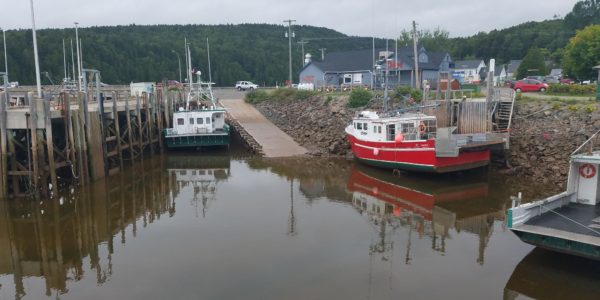 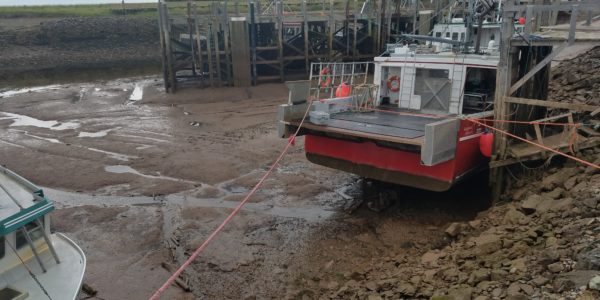 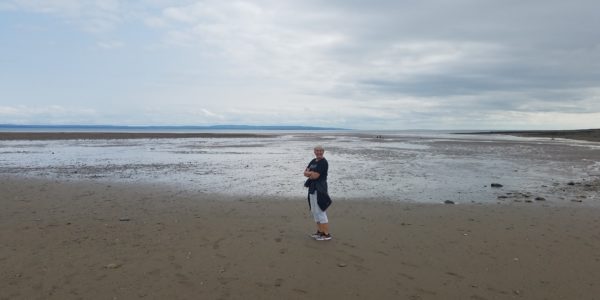 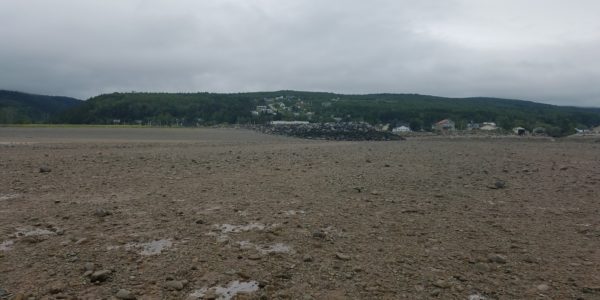 Moncton has built a Tidal Bore viewing area at a very dramatic position on their waterfront.  Right at a curve in the riverbed,  which is a small channel with a wide expanse of steep,  muddy banks.  All of a sudden,  you see a surge of foam coming around the bed.  Soon you hear the “wave” as it moves at about 10+mph upriver.  After the wave front passes,  you think the show is over.  But the water accelerates.  Soon it is a torrent,  filling the previously-empty basin of the river quite rapidly;  whirlpools everywhere.  Now,  Moncton is 30km from the actual bay,  so this wave and all that water have gone that far;  and will go another 20k up river.   It is quite awe-inspiring,  actually.

The Fundy National Park turned out to have other amenities – a VERY NICE salt water pool,  which we used a couple times.  Some hiking.  A very nice campground.

And, as an added bonus, our similarly mobile friends the McDowells (of broken water-heater fame earlier this summer) booked the site right next door to ours!!!   Not a surprise (that would have been FREAKY), we had realized earlier this year that they would be passing northwards towards Newfoundland while we were passing southwards from Newfoundland…so an intersection-opportunity clearly existed. 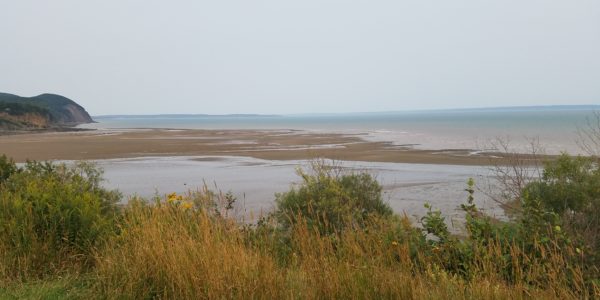 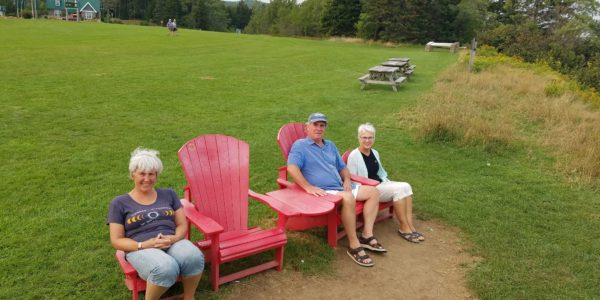 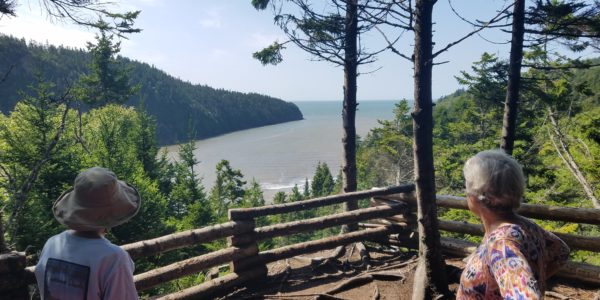 Further coordination along the way had us with stock of Moose meat of various forms for consumption,  so we expected full-monty enjoyment of the Fundy area AND Canadian comestibles.

During discussions and coordination of this impending coincidence of our paths with Mike, he sheepishly asked us to cater for the initial Chardonnay Supply.  Mike realized that they will have just crossed the border before coming to Fundy and from previous experience,  we all know that the McDowells seem to attract a heightened level of attention at the border.   The “Attention” they get at the border makes for good stories, but tempting fate (and full-cavity searches) by freightering a load of Chardonnay seemed an unnecessary risk when Los Harris are already in country.

We agreed, reluctantly.  (Shhh;  don’t tell Mike how little of an imposition this was…Liz likes Chardonnay, too!)  I required, in exchange for said provision, that Mike cater for our ice cream needs while together.  Mike grudgingly agreed,  knowing full well from many previous intersections that can be extensive and expensive.

An aside:  I have to be careful how this quid pro quo is executed.  Last time we were together, Mike said he would buy the first Ice Cream fix for the group. This turned out to be ONE SMALL BOWL of Gelato shared by Liz, Dan and Fran.  In Mike’s defense,  that is what the group ordered,  and he DID pick up the tab for the first fix, as promised. Not Mike’s fault that we let it happen this way; but it won’t happen that way again!!  We did NOT execute the Ice Cream Clause during our stay in Fundy,  but I am keeping track!

As it turned out,  the border crossing was uneventful,  so Mike and Fran arrived with their own supply of Vino to add to ours.  (Mike believes this obviates his ice-cream obligation – I surely do not!!).  We also had some Newfie Screech Rum,  so evenings were quite festive after days of tidal-viewing.

One day it was concluded that Fran and Liz were going to go fishing.  There was a small lake in the park with a kayak concession,  and ostensibly with fishing opportunity.  We turned up at the concession and inquired about fishing.

I got the distinct impression that not many people ask,  but the clerk/owner of the concession assured Fran that people “catch their limits” often.  That was enuf to seal the deal,  the ladies rented a canoe,  and liz a fishing pole (which I think was the concession-owner’s kid’s-pole,  actually).     As it turned out,  the “Limit” must be very small….

There was a discussion of bait.  Fran had some “stuff” in a tackle box that resembled artificial lures.  The regulations for the park FORBID live bait (a rule of which the concession owner was unaware but confirmed after we asked and he looked it up).  Liz then asked if she could dig up some worms;  the owner said:  ONLY IF YOU DON’T TELL ME YOU ARE DIGGING UP WORMS.    Eventually,   they decided to go with whatever Fran had in her box.

The fishing expedition started uproariously.  The Canoe was pulled up to the dock;  Liz decided she would sit in the back and Fran the front.  Liz got in.  Fran started to get in FACING LIZ (i.e. backwards).  Apparently, neither was willing to cede directional control to the other – BOTH wanted to steer.   This was not a surprise to either Mike or me!   Regardless, everyone chuckled,  not unlike if Fran had boarded a horse backwards!

There was the obligatory wager on the outcome.  The final terms:  If (when,  according to Fran) a fish was caught by the women,  the men would clean and prepare said fish.  Mike wanted no part of this,  so “the men” became “Dan.”  The other side of the coin, in the event no fish were acquired on the end of their lines,  had Fran and Liz treating to seafood dinner (either restaurant or fishmonger+cooking).  Weirdly,  Mike seemed to think he would be partaking,  despite not being at risk in this transaction.

Ultimately,  no fish were caught.  And no fish dinners were provided.

As usual,  wagers with the McDowells (mostly sports-related, with Mike) evolve into a discussion of what was REALLY meant and how the terms were to be interpreted; all of this quite after the fact.  Fran stated she believes the wager extends in perpetuity – if she EVER catches a fish,  I am obligated to clean and prepare it.  If this were true,  the other side of the coin (the part where Fran and Liz BUY fish) really doesn’t exist – from Fran’s point of view, I couldn’t win.

Which was and is also not a surprise to Mike or me!!!

Anyway,  no fish were caught or purchased or prepared; so none eaten.  According to Fran,  the wager is still ongoing; according to Dan and Mike, it is over and in the record books.

We’ll see what happens down the road.

2 thoughts on “An Angel in Halifax Clothing!”

Halifax (After a Newfie Last Hurrah)

We finished our run in NewfoundLAND and Gros Morne with some local social events. First, we went to a highly-regarded…