As we wind our way north, our first stop after Prince George was a place called Telkwa.

This was a non-descript place at best BUT the owner of the park we stopped at exclaimed, “We have FIBER Internet and 120 Cable Channels!” Internet has NOT been great up here (and getting worse), but here was a chance to connect FASTER than we do IN CHICAGO!!! So we took care of some bidnez.

And the Cable TV. Well, let’s just say this was a little slice of heaven. Satellite has not been working since basically just north of Vancouver…the necessary satellites are just too close to the horizon. Even if there is not a tree in the way, there is just too much atmosphere for the signal to go through, reaching our little dish too weak to register.

Given that, we could EITHER install a much bigger dish, turning the bus into a vehicle that looks like a NASA Radio Telescope tracking vehicle, or we can read a book instead. I’m resigned to the latter (not so bad, really).

But in Telkwa, we got 120 channels, including 7 Canadian sports options. As you might expect, 2 were showing a Junior Hockey tournament, one the Stanley Cup, one Soccer, One the Blue Jays, One the Raptors, but ONE WAS SHOWING THE CHICAGO CUBS!!!!! And this particular game was won in dramatic fashion – an eighth inning comeback followed by a walk-off, pinch-hit single!

The bus was ROCKING! Wait, what did you think I meant by that? It was the middle of the afternoon!!!!!

Telkwa itself did not offer much – there was a nice hiking trail along the Bulkley River, leading to the one and only pub/restaurant in town. Nice walk, nice pub, even serving a local beer from the next town over. An EXCELLENT Ice Cream Stand.

The area is WORLD reknowned for Steelhead Trout, and later in the season there will be fishermen from all around the world filling the RV park, hotels, campsites and the pub (with fishing stories, no doubt). This was the off season, for sure.

Once I realized there was a local beer, we decided to take a drive (about 5 miles) to the town of Smithers, where the brewery was located. This town was a little bigger, but still not too much going on. The local economy is heavily fishing-oriented, so there were several sporting goods stores, all open (barely – it is not fishing season until Fall). We DID get a chance to enjoy a flite of quite excellent beers at the Smithers Brewery.

Smithers also has a local ski area – and an airport. Looked pretty spectacular from below – still snow on the mountain. We asked about this – do people come in the winter for the skiing? The Waitress said, “Not Really. Many little towns have their own ski areas…the mountains are there, we get 30’ of snow in the winter (NOT A MISPRINT – 30 FEET).”

As she was telling me this, I could not immediately understand why Whistler is an international Skiing destination, but Smithers is not. Perhaps part of the reason is the airport – VFR only and closed for days at a time with low ceilings and snow. Smithers is just too hard to get to. But I bet once you got there (if you weren’t in a hurry to get there or out), you would have a MAGNIFICENT and UNCROWDED time on the slopes!

Our next stop was in Stewart. This is a little (now) town on the end of the “Portland Canal.” Billed as the northernmost ice-free port in Canada, it has seen several booms and corresponding busts. There was a GREAT little museum in Stewart, and the women running it gave us about a 1 hour tour of the artifacts therein, followed by an EXCELLENT 1 hour documentary film.

Once, Stewart was bigger than Vancouver – the draw was mining, but the mines never really turned into the wealth everyone anticipated, so most miners came and left broke. There are a few mines that operate – copper was big at one for awhile, but that mine is now closed.

In addition to mining, the fortunes of the town were determined by timing and bad luck. At one point, one of Canada’s Railroad magnates wanted to complete a railroad line to the rest of Canada via Alberta/Edmonton. Another fella (A German Aristocrat) built a fabulous hotel at what was intended to be the railhead. The problem: World War I. Then the Depression. Then World War II.

The Hotel Owner had to leave or possibly be arrested. The Railroad never happened, the hotel still stands as a derelict building and the town now has about 400 permanent residents. Logging and a little bit of mining and some tourism is how everyone survives. When we were there, there was a Chinese ship in the harbor being loaded with Trees to be cut to 2×4’s and such once in China.

Next to Stewart are a couple of VERY worthwhile stops.

One is Hyder, Alaska. The border runs rignt down the peninsula, and one crosses into Hyder and the USA at a semi-manned (No US agent,  but a Canadian Agent upon return) border crossing. Though technically the USA, Hyder gets its Electricity an everything else from Stewart/BC. Hyder is really a ghost town, but does have a viewing platform that allows tourists to watch the bears eating Salmon in the river. Unfortunately, all the action there happens ONLY when the Salmon are running, which is later in the summer (July and August).  Nothing to see here, folks,  move along!

If you continue past Hyder, the road (called the “Granduc” once you cross back into BC as it winds along) turns to gravel, and then worse. And if you keep going (about 25 km) you reach the Salmon Glacier, and we decided to give this a shot.

THIS IS THE REASON we exchanged the Clown Car for the Jeep – “roads” like the one we took to the glacier. UNFORTUNATELY, about ¾ of the way there, the road was CLOSED due to the remnants of several avalanches.

The snow was not too too deep, and we entertained thoughts of continuing on – the heart was willing and the Jeep in 4-wheel-low was most likely capable.

But, considering the road, the bears, the rain and the distinct LACK of traffic – only a few small RVs with German Tourists aboard had been on the road to that point, and none of those vehicles were capable of continuing – we decided NOT to go. If we had a problem, it might be a MONTH before someone happened by – and I had a half dozen granola bars and 2 quarts of water in the car.

We did see more than an occasional bear along the road, to be sure. And lots of tracks. One of the reasons we chose NOT to walk farther up towards the glacier was the BIG set of bear tracks right on the road – and a “woofing” call-and-response sound from not too far away (I cannot say for sure this was a bear – or 2 – but they do make those sorts of sounds). And Porcupine, and beaver, and Elk.

Even though we never made it to the foot of the glacier, we DID get to a bend in the road that had a SPECTACULAR overlook to the glacier. This glacier is something like the 5th largest in North America, though it has shrunk CONSIDERABLY in the past 20 years.

There is NO DENYING the disappearance of the glaciers – there are 20-some in the Stewart area – as the climate warms.  The toe of the Bear Glacier used to extend all the way to the road — it is now at least a mile away.

I guess that question is in the Border Agent Training Manual.

Returning to Canada from the little spit of the USA where Hyder (barely) exists, the Canadian Border Agent (yes,  there is a MANNED station at the crossing between ghost-town Hyder and near-ghost-town Stewart) asked us if we had anything to declare.  I chuckled — “I am not sure how we could, sir,  since we left Canada in the other direction there is NOTHING on the road and we did not even get to the Glacier.”  He chuckled too…I guess that question is in the Border Agent Training Manual.   He did say there was a cheese shop in Hyder — off the road a bit.  I asked him if I should go back and get some — it might make his day if SOMEONE had SOMETHING to declare!?  He said it was not very special.

We stayed an extra night in Stewart to take the chance to see the Glacier. Steve and Kathy decided that seeing several other glaciers on the way in to Stewart (Highway 37 is also called the “Glacier Highway”) was enuf ice, so they decided to move on. They’d stop alomg the way and wait for us to catch up. Of course, no problem – we are travelling with the Enfingers, but not so tightly that we can’t either of us break away for a bit – that was the deal when we agreed to tackle this adventure together. Besides, they were able to give us road reports for what lay ahead of us!

Our extra night in the Municipal Campground in Stewart was nearly free – there are soooo few tourists in May that the campground is ½ price…so CAD$15/night. We also had a FIRST for our travels so far. That evening, the campground operator knocked on the door of the bus:

“There is a wolf down at the other end of the campground.
He is shy and won’t bother you, unless you have a small dog or toddlers
(we have neither, of course).
I could run him off if you want.”

I said, “HELL no. I would LOVE to see a wolf.” Of course, the creature never made it down our way – more interested I guess in the Toddlers up there. At least there WERE toddlers there; perhaps not anymore? 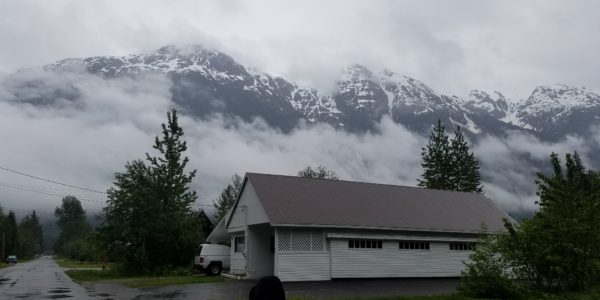 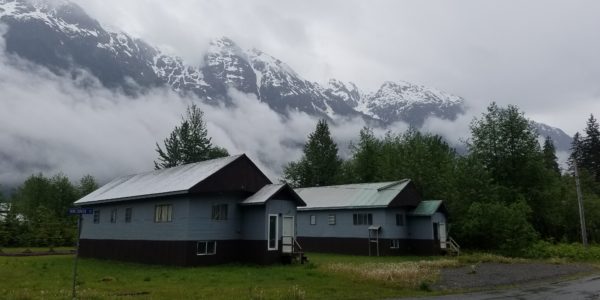 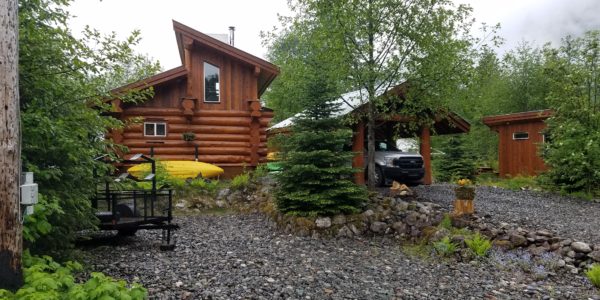 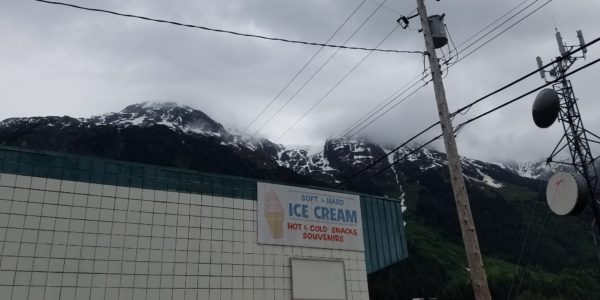 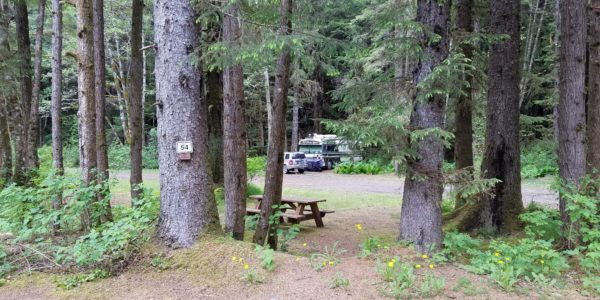 As we started out of Stewart, heading North, I was struck with an obvious example of just HOW FAR north we already were. You know you are pretty far north when the optimum location for Solar Panels, which in our normal geographical experience are mounted on a south-facing ROOF on a apparatus that optimizes the angle, is on the SIDE of the building! Nearly Vertical…to face the sun which is at quite a low angle! The sun rises at about 4 AM and sets at about 10, but never gets all that high in the sky. So, of course you have to account for this in placing solar panels.

I assume the folks with the panels also have an alternate power option – there is little to NO sun in the winter, and it rains a lot. Hard to imagine Solar is Practical up here.

← The Little Engine That Could? ← Yukon, a Whole ‘Nother Territory!
Next Up

We reached Watson Lake in Yukon Territory after driving on what can only be characterized as a really bad road.…

The Little Engine That Could?