We were considering if we wanted to extend in DC; to be part of historic celebrations that might take place on Wed. Nov. 4. We decided it was unlikely that there would be ANY certainty by then (or, as it turns out, by a month from then!), so we decided to press onwards. We had a couple of spots in mind for some serious decompression, after an emotionally difficult time in DC: Myrtle Beach and Hilton Head. The former we had never been to (we were scheduled to go to a rally there in April 2020, but of course we did not). The latter we had stayed at before, and enjoyed very much. So, Off we went!

AT Myrtle beach, I was able to scam a spot DIRECTLY on the beach in the HUGE RV Park (1000 sites at least) where the aforementioned rally had been scheduled. I am SURE we would not enjoy this park during a high season in normal times (there was a WATER and SPLASH PARK, mercifully closed,  for the kids near our RV spot); but for us this was a SUPER ENJOYABLE time; culminating in an election-night Zoom-soiree.

We set up shop on our newly lighted patio for the evening, and invited friends from all over the World to pop in and out during the course of the evening. Norman Same from near Brisbane, Australia gets the distance price; though is distance really worthy of a prize if by Zoom? Well, catching up with Norman WAS a prize and we were glad so many folks made time to ”Drop by.”

Before Myrtle, we stopped for a couple days at a State Park on the Eastern Shore of Chesapeake Bay in Virginia. There, we rode bikes; ate seafood and just generally chilled.

One day, two ladies pulled in to the spot next to us. Ladies of a certain age (certainly in their 70s). Sisters, one was from Maryland and one from Florida, and they were going to South Carolina to visit their brother. In positioning their tiny trailer, they had occasion to hook the front bumper cover of their car on the fire pit in in the gathering dusk, and rip it loose.

I noticed this as the two of them were under the vehicle — legs only visible. Having assumed that position MANY times, I walked over and asked if they were having a party under there, and could anyone join? That’s when I heard the story about the firepit.

Anyway, they were a bit fklumpt. They had a roll of duct tape out, but seemingly had given up on that approach and were getting ready to call roadside assistance. I asked if I could take a look – I did not want to hurt their travelling-sisterhood feelings with chauvinist attention, but it seemed to me it should be possible to fix this well, if not permanently with a zip-tie.

What is it about Ladies and broken Campers? This has happened to us before…

It turned out the repair could be effectuated with nothing more than a few washers, which I also had onboard to their amazement. They were effusive in their gratitude, which I deflected as best I could. I said that we are on the road continuously, enabled by the kindness of many strangers over the years – it’s what people do to help other people, even though these days most interactions seem to be far less friendly.

And, Why is that?

Are people ACTUALLY less willing to help these days? Do people ACTUALLY HATE other people (if they are “socialist,” or “Racist” or whatever other “ist” is around to hate?) as they state in interviews and memes and posts online? Or are they incited by politicians and their “news” media of choice?

In my experience, people hate caricatures of people, created by their particular political orientation’s “leaders.” I noticed the “Biden” buttons the ladies were wearing, but I hadn’t noticed that before I helped with the bumper. Would I have helped them if I HAD noticed they were wearing a Trump Button? I’d like to think so – no, I KNOW I would have — Many of the people who have helped me over our years on the road would be wearing a Trump Button and know very well that I am one of those Damn Yankees…from CHICAGO, no less! Yet help has always been forthcoming…

PEOPLE HELPING PEOPLE is what is important; let’s all remember that!!!

So, after Myrtle Beach we headed to Hilton Head for a few days – friends Fran and Mike McDowell have a Pad there, which they rent out when they are not ensconced therein. They offered it to us in exchange for Chardonnay futures. VERY ENJOYABLE – Hilton Head is a great place for Biking and Relaxing, and we did lots of both! 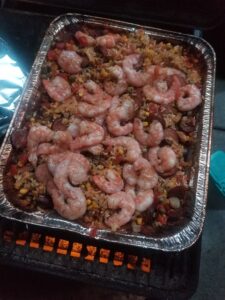 We even reprised the Paella evening spent with the McDowells,  last time in Hilton Head.

After Hilton Head, Our path and plan was intended to get a Preventive Maintenance visit in for RV WHERE YET at our Mechanic Friends in Daphne, Alabama. That’s WAY MORE than a one-day drive for us (limited as we choose to be to 4 hours a day). We decided to visit Bluebird Friends Karen and Jim Gulrich in Milledgeville, Georgia, and then Liz’s Brother in Decatur (near Atlanta).

The Gulriches live on Lake Sinclair, which is a Georgia Power Reservoir. What a great spot, on a spit of land with an expansive view of the lake and the sunset. We had a DELIGHTFUL visit, complete with Beer (me) and Cabernet Sauvignon (Liz and the Gulriches) and Lasagna on their magnificent screen porch.

I even got my “dog fix” (we can’t have one, really, but I sure miss having one) addressed by petting their super-friendly rescue-pups. The Pit Bull was a little hesitant at first about me (showing GREAT perception and judgement), but that quickly vanished as I demonstrated my acumen at belly-rubs.

Before dinner, I had to do some RV WHERE YET electrical Troubleshooting – a circuit breaker was continuously tripping and resetting. Jim had parked us by his shop and offered tools and assistance, but as usual with these things, its more about noodling than tools.

I discovered which circuit was involved by feeling distinctly hot wires (YIKES!) in the overhead load center compartment. Then it was a matter of figuring out what was on that circuit. I removed the wires from the breaker and walked around seeing what no longer worked! I knew ONE item on the circuit was our new fridge – which beeped as the breaker tripped and reset each time. What I discovered was a door switch (the one that turns on the step light when you open the door) that was corroded and shorting to ground. It had probably been leaking to ground for a long while, affecting battery life. I eliminated the switch (we HATED IT anyway – if you leave the door open, the light is on).

AT David and Stephanie’s in Decatur, we parked on the street and had a carryout BBQ dinner on their covered carport (it was a bit rainy). David is in the mushroom business selling all sorts of gourmet fungus to groceries and restaurants. Sometimes there are some “extras” and the fridge(s) are chock-full of Portabellas, or Chanterelles, much to Stephanie’s chagrin. For our visit, it was the former, and we left with a bag-full that made for AWESOME sandwiches on the road next day!!

We made it to Daphne for our Maintenance Visit. Every 6 months or so, we visit Lazzari Truck Services – they put RV WHERE YET up in the air, knowing that boat payments will be no problem in future months! Seriously, they have treated us fairly since the first time we visited them under duress (broken suspension part) almost 5 years ago.

Most truck shops don’t like to work on RVs (or WON’T, or at least charge double), but because they know us AND RV WHERE YET, I no longer need to spend anyone’s valuable time making the case that our RV is NOT AN RV, but just a truck with awnings. They even let me work with them and/or be under the bus working on my own projects.

That expectation ALONE was surely enuf to assure cosmic retribution!

For once, we expected NO issues and had NO projects to speak of. That expectation ALONE was surely enuf to assure cosmic retribution! Suffice to say, because of what we found, we were effectively stranded and almost immobile (near Mobile, ironically).

Before anyone worries, the word “Stranded” does mean “cannot leave” (which we cannot), but it implies some level of hardship, which we have not. We expect to be there for up to 2 weeks, but in a beautiful state park, right by the ocean with bike trails and Dairy Queens and Waffle Houses nearby. Interrupting our Thanksgiving Plans; but, it’s not like those plans included family and homecoming – they were always gonna be a smoked turkey breast for the two of us, safely ensconced in a socially-distant RV Spot.

For the rest of the story of how we got “unstranded,” which involves MANY acts of kindness by complete strangers, you’ll have to wait for the NEXT post!

← Washington DC Melancholy ← The Good, the Bad and The Stranded…
Next Up

The Good, the Bad and The Stranded…

As I mentioned (teased?) in the last post, we stopped at our favorite mechanic in Daphne, Alabama, to help with…

As we disclosed in our previous Newsletter, we planned to spend nearly a month in Washington DC, helping to sort…