We’ve now spent almost 2 months in Galveston. We posted almost a month ago about holidays and Sushi and Brake Repairs; It has taken almost another month for enuf “stuff” to happen to justify a post.  In the meantime,  we’ve done a lot of Beachwalking and Brewery-supporting, with a measure of Ad-Hoc-Al-Fresco Dining.

One of the things we have enjoyed the most on our continuing journey is meeting and deepening relationships with people; and although “meeting” has taken on new (and mostly distant ) dimensions, it still happens. In Galveston, it was a chance to get together with folks we met at a Bluebird Rally a couple years ago. Kelly Wood and Buck Jackson were parked next to us back then, along with their onboard menagerie of rescue pets. Our conversations at the rally were not extensive, but Buck signed up to receive our newsletters, and we’ve heard a word or two from him every now and then ever since. When Buck read that we were heading for Galveston, he let us know they lived in Dickinson, which is just up the road!

To say we “Had Tacos on the Porch” would be like saying the Mosquitos in Galveston were a little annoying. You’ll hear more about that shortly!

Once we settled in, we agreed to meet for brunch in nearby Kemah, which was half-way between RV WHERE YET and Dickinson. Quite a pleasant, socially-distant meal at a Greek place with an outdoor patio, followed by a pleasant walk on the Kemah Boardwalk and a commitment to do that again! Round 2 was beer at the Bus, and yet another pass was enjoyed at their home. THAT exposed not only their hospitality, but Buck’s gastronomic capabilities. 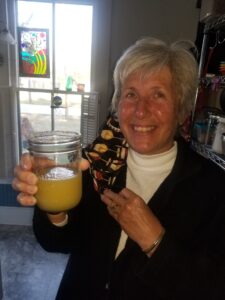 “Tacos” included Fresh Shrimp in a cream sauce, Zucchini and other veggies in that same sauce (Kelly is vegetarian) and grilled skirt steak. And even THAT doesn’t fully ‘splain the experience, because Buck had prepared 4 different salsas which ranged from Incendiary to Earthy. Before and after the tacos, we prepared our contributions – Jalapeño Margaritas and Dulce de Leche for dessert. Of course, we worked far less hard on these, but the sum-total made for a DELIGHTFUL EVENING.

We also became aware of how MONUMENTALLY SMALL the world actually is, as we enjoyed our time with Kelly and Buck. Buck, as mentioned above, has been reading our blog. He may be the ONLY reader, IDK, since my mother passed. Anyway, he said that his brother knew “Marley.” I wasn’t sure who he meant (Bob Marley? Ziggy Marley? Marley the Dog from the movie?), so I asked.

He said, “Didn’t I read about an artist in your family who is 107?” OHHHH!! He meant “Marilee” which is apparently pronounced “Marley” in Buck’s Alabama/Texas Twang. GOT IT.

So, now I had to ask…”Who is your brother and how does he know ‘Marley?’” All the while thinking how a Bluebirder’s brother (having met said Bluebirder on the road, by coincidence) who lives in Tennessee should be connected to my family in this or any way.

Turns out, Buck’s brother John and his wife Lindy are artists and Photographers in Tennessee, and somehow (still not clear how) they met and know Marilee, and even own some of her art. In fact, Marilee had a treasured photo taken by John in her studio!!! They knew Marilee well enough that my cousin (Marilee’s daughter) Joan had called to personally let them know Marilee had passed from COVID.

We ARE all connected!!

In addition to Kelly/Buck, we had occasion to spend a few hours with the Schmiders from Chicago…Petra, Juergen and their kids passed thru in their RV and spent a couple nights, where we all learned a little bit about the great outdoors, Texas (well, at least Galveston) Style. The first night, we had a BYO-but-communal meal on our patio: The Harrises had burgers and beer; the vegan-Schmiders prepared a soup. Unbeknownst to us, the Schmiders were welcomed to Galveston not only by us, but by a swarm of angry mosquitos. For some reason, the critters did not seem interested in the Harrises, though the Schmider’s daughter was CLEARLY the Canary in the Coal Mine for a situation that changed in a BIG WAY the next day.

I grew up in Minnesota, and we have been in the Yukon and Alaska – all places LEGENDARY for their Mosquitos.

This (the Mosquitos) is a topic that needs some focus. We had, by the time the Schmiders arrived, spent almost a month in Galveston. During that time, I had been outside (doing some important Bus Repairs) quite a bit with nary a bite. We had even started to consider that Galveston could be “the place” for us, having identified an abandoned church with 12 former-RV Hookups on its property…all just across from the ocean. But, the next day with the Schmiders (and almost every day since), the mosquitos were out in swarms the density of which could obscure the sun! And, not just at dusk – ALL DAY LONG. And, these were LARGE mosquitos, that actually CRUNCH against your skin when you swat them.

Now aware of the pests, we started to notice all the standing water in the area. And to understand why our first few weeks had been mosquito-less…WIND. It is often at least breezy, if not windy here, and this keeps the skeeters at bay. But if you get in the shadow of a tree, or the bus, or even just the downwind side of yourself, you will be ATTACKED. ESPECIALLY if the RV Park has just mowed the grass, apparently stirring up the beasts.

Fortunately, we also noticed that the “THERMOCELL” mosquito devices we discovered at a Bluebird rally are pretty effective at keeping them at bay, but ONLY within the radius of a picnic table…allowing for cocktails with Kelly and Buck, for example. But NOT BEYOND.

I grew up in Minnesota, and we have been in the Yukon and Alaska – all places LEGENDARY for their Mosquitos. They were worse here than any place I have been. Suffice to say, Galveston is not on our short list for places to be when we stop moving.

Because if you stop moving in Galveston, YOU WILL SHORTLY NEED TRANSFUSIONS!

And, the night of the skeeter invasion, we all discovered another aspect of Texas – WIND. It’s pretty flat here, and there is either a breeze off the ocean or a front has gone through bringing wind from the North. One such front went thru in the middle of the night the last night the Schmiders were here – SUDDENLY winds were steady at 40mph and gusting well above. They delayed their departure a little so as to not drive their high-profile RV in the teeth of it.

Not to say we regret spending time in Galveston. As mentioned in our last post, Our RV park is directly across from a GREAT ocean beach that extends for miles. Liz runs there often; and we walk or ride bikes several times a week. We also bike towards downtown, where there is a brewery with a patio. And, I added to our repertoire by acquiring a portable table and chairs that we can carry on our bikes, so we can enjoy a ride AND a picnic outside of Waffle House. 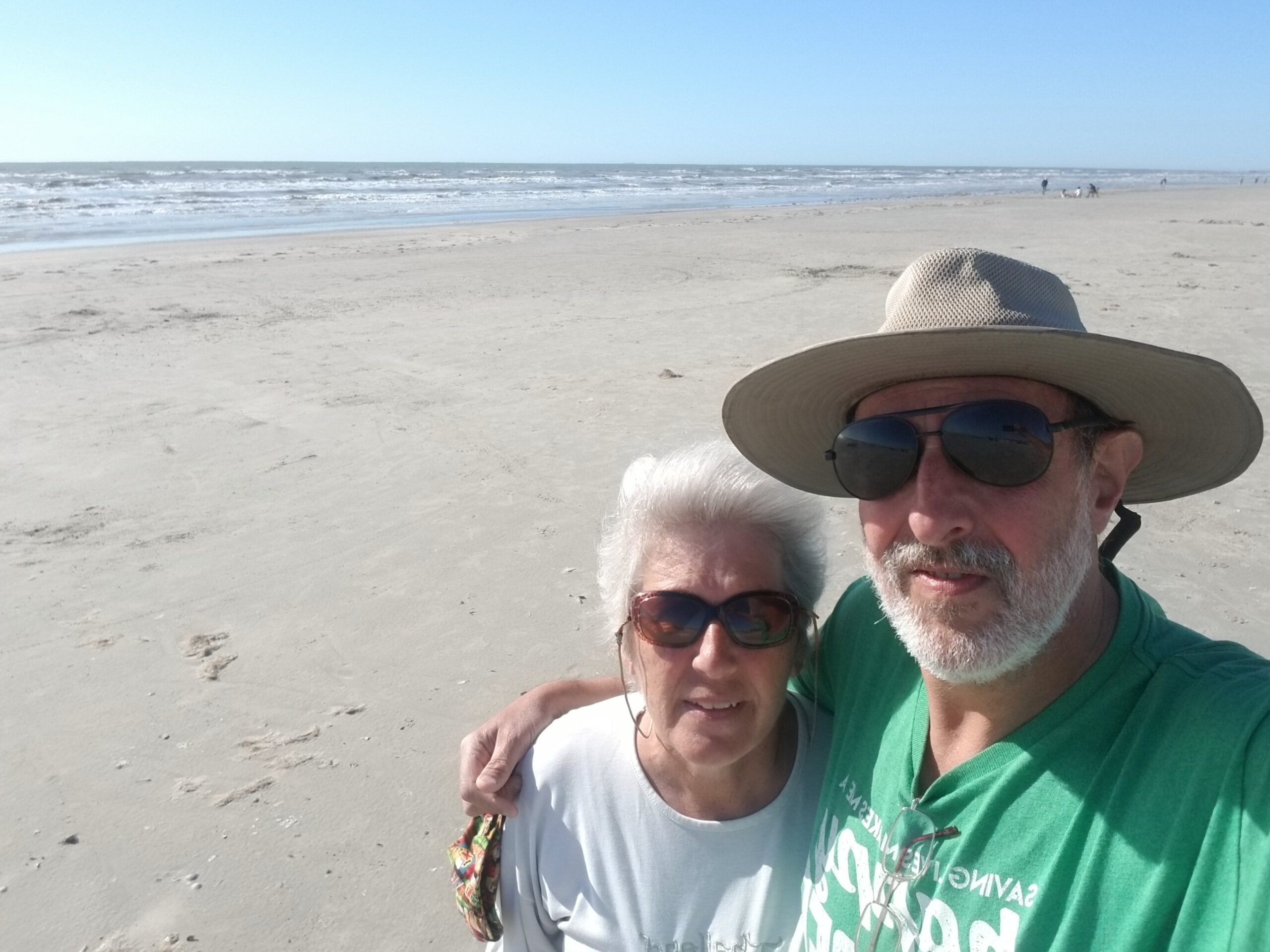 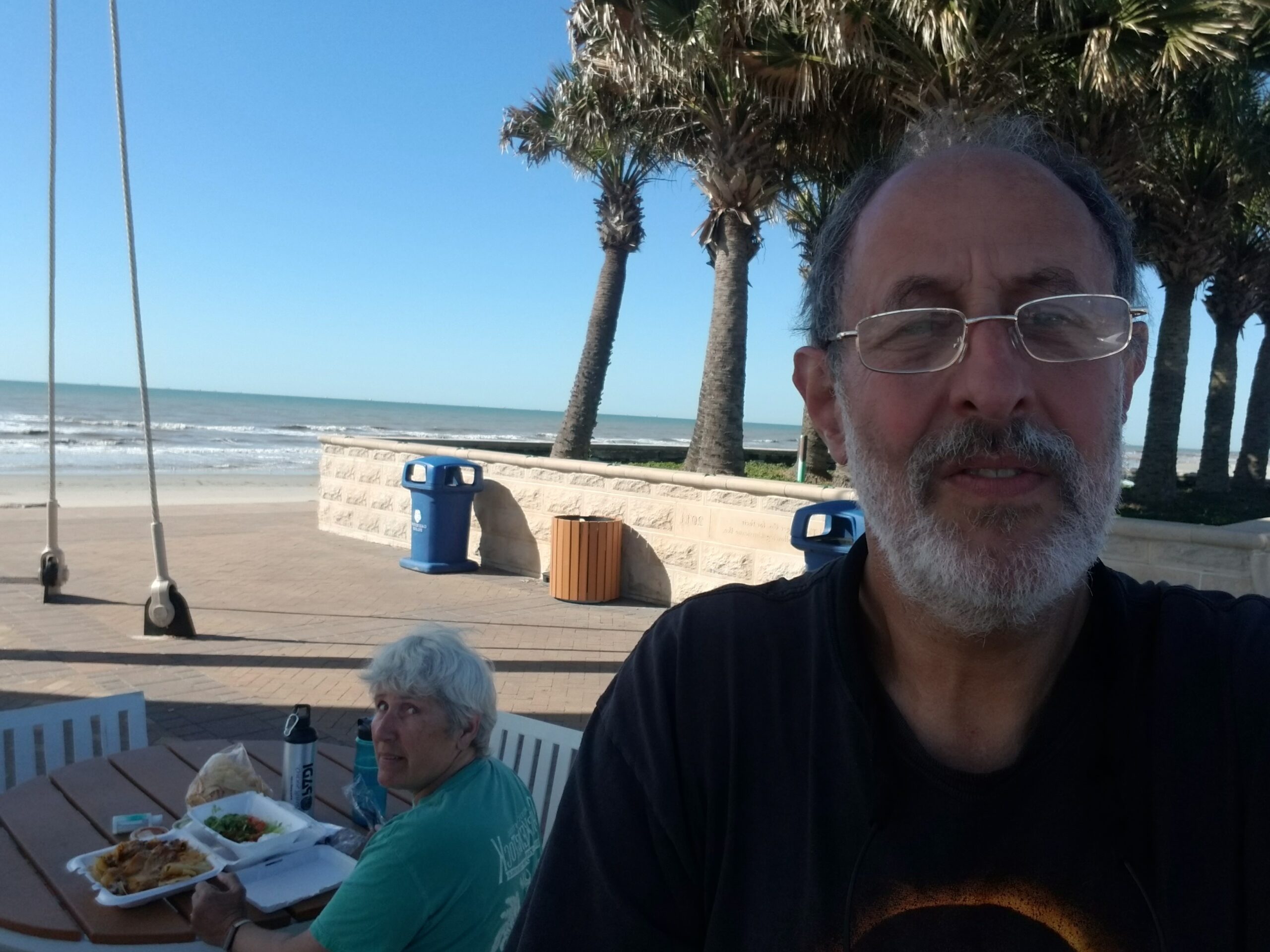 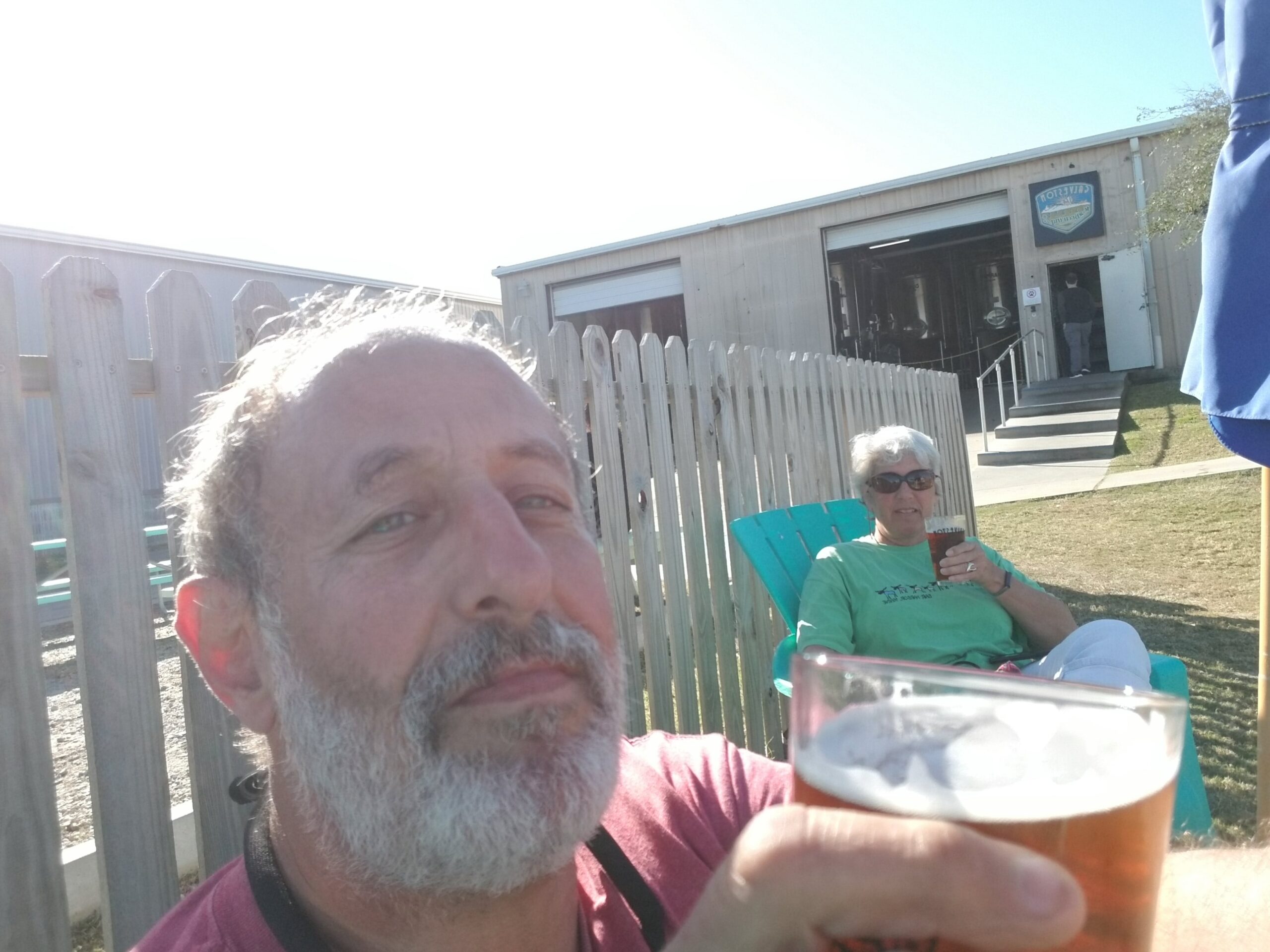 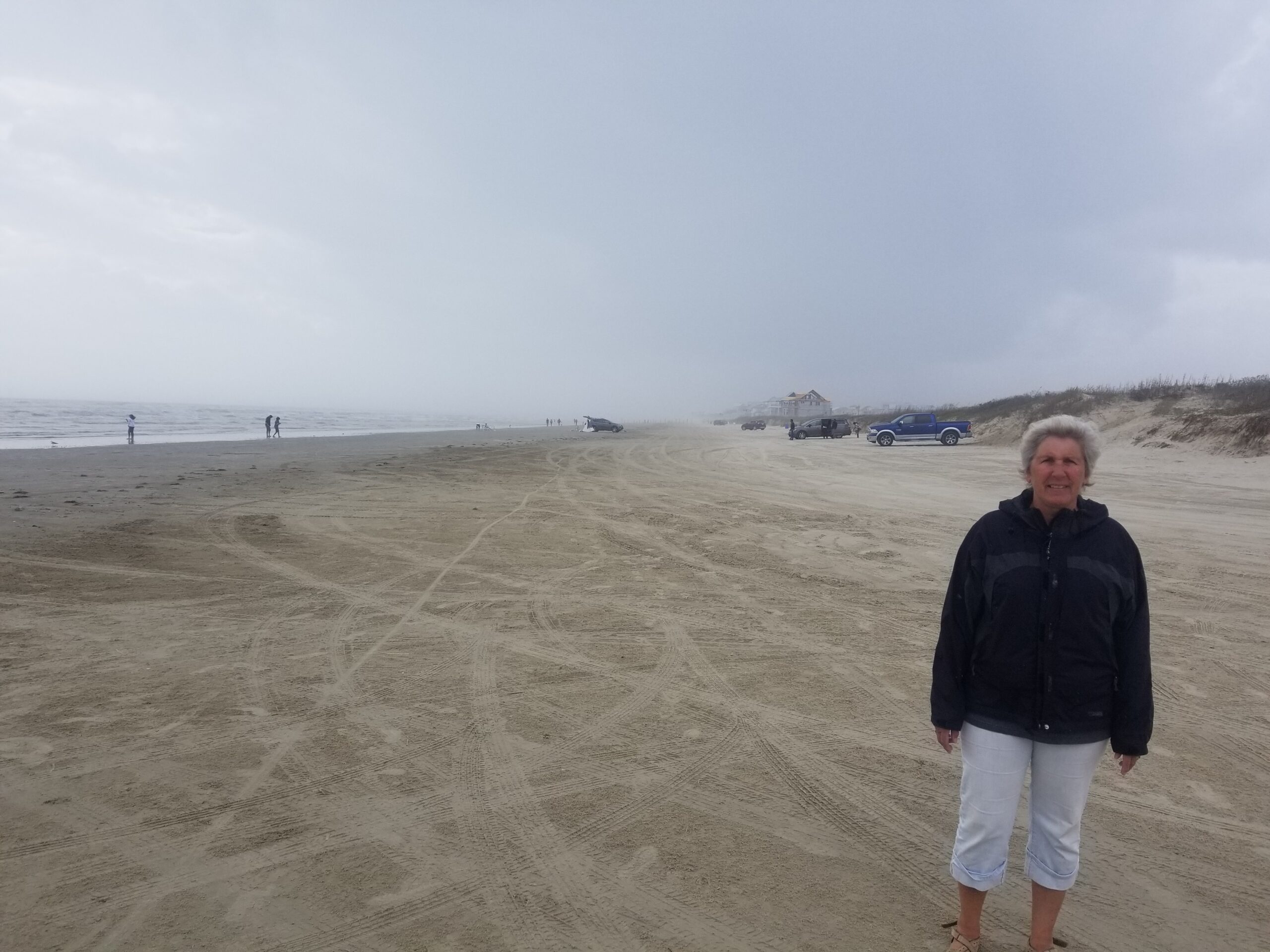 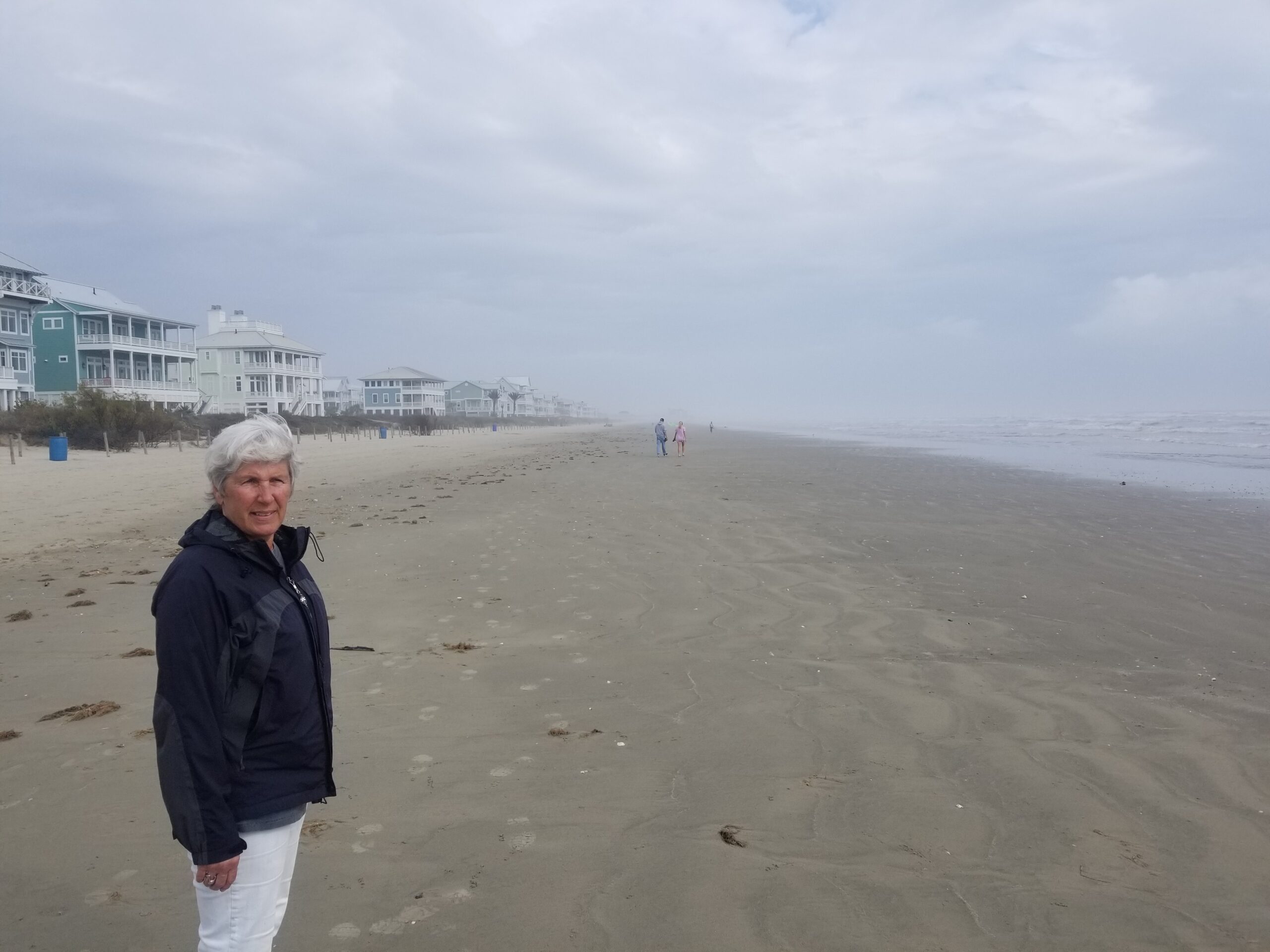 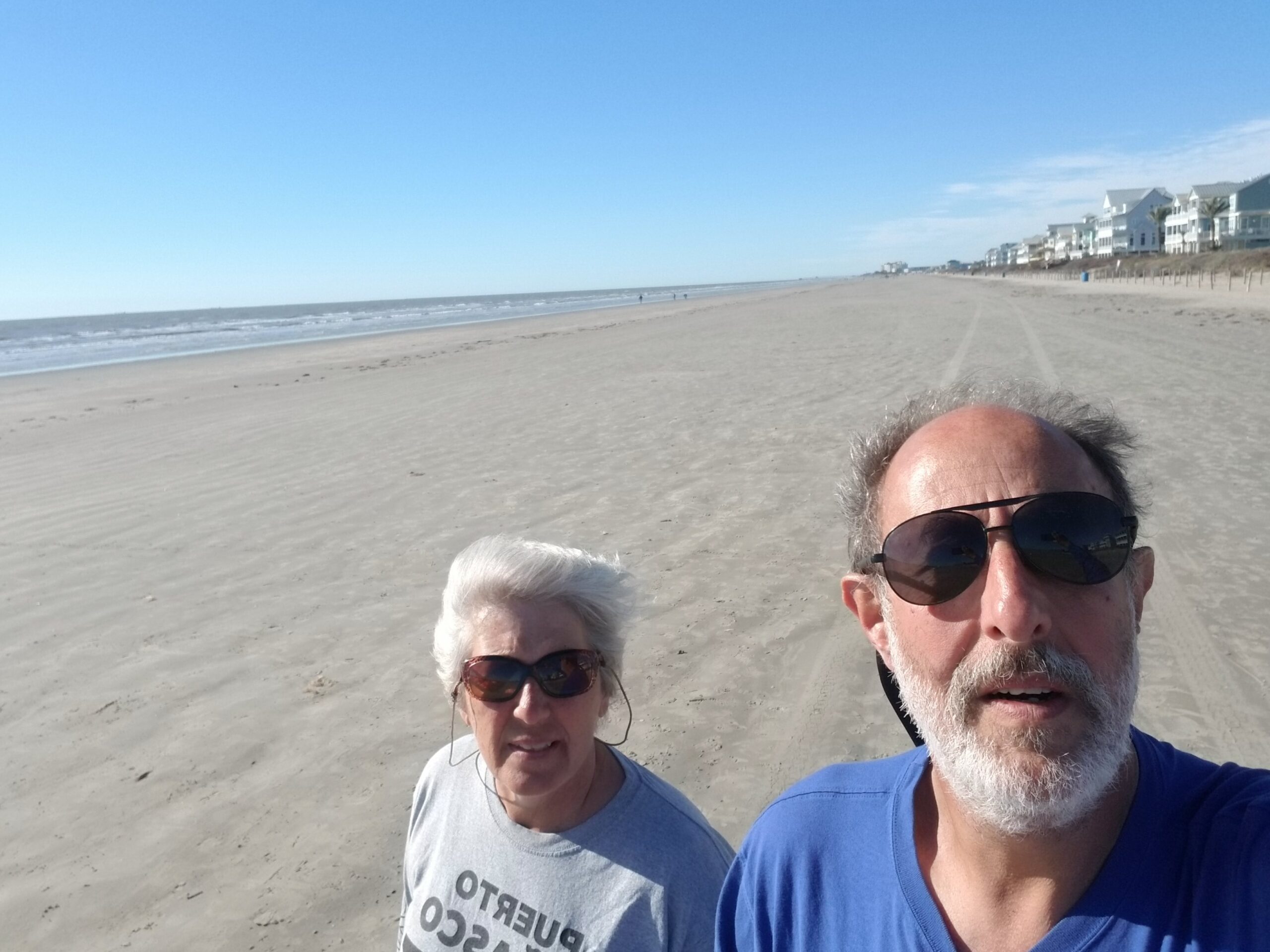 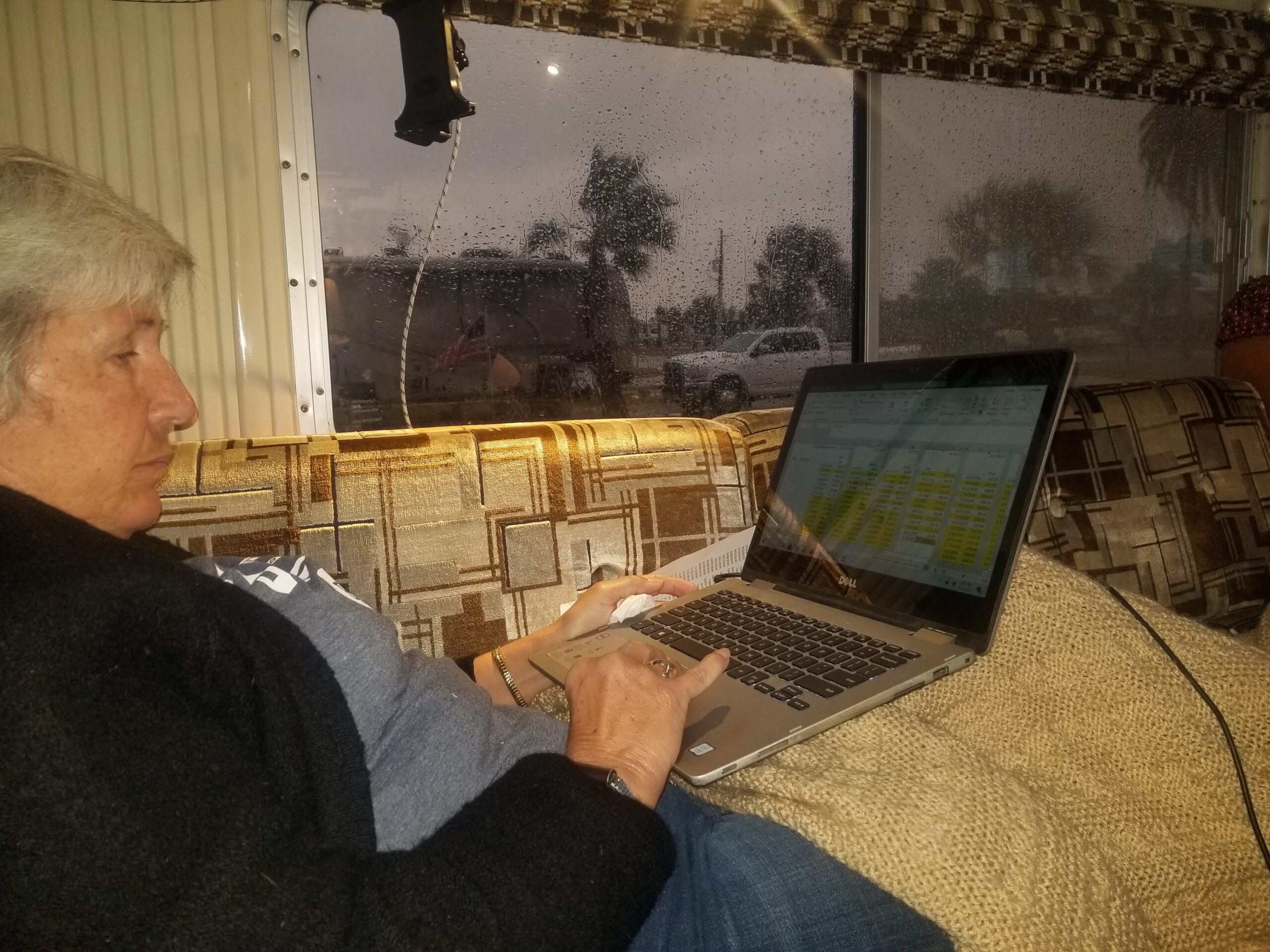 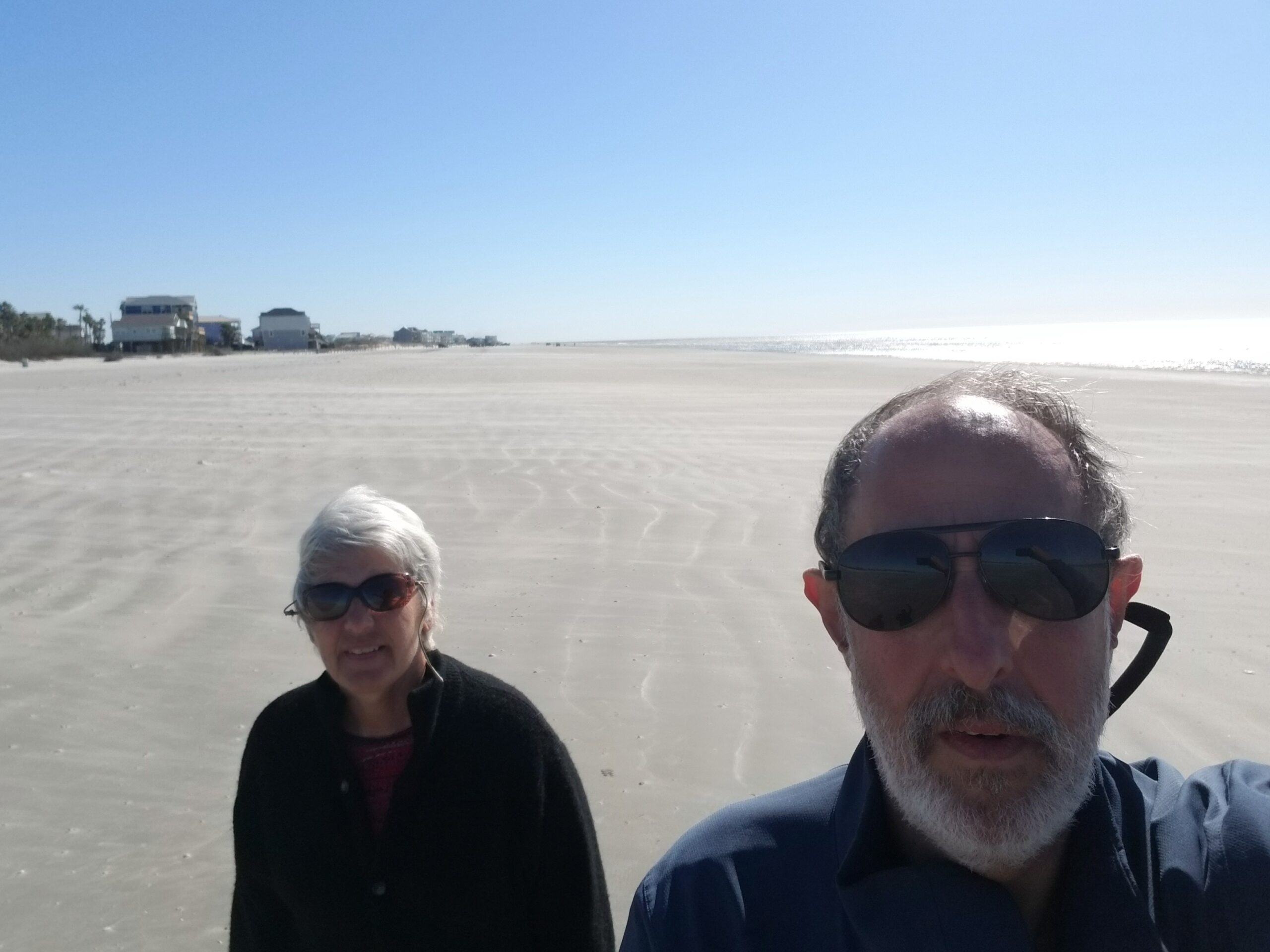 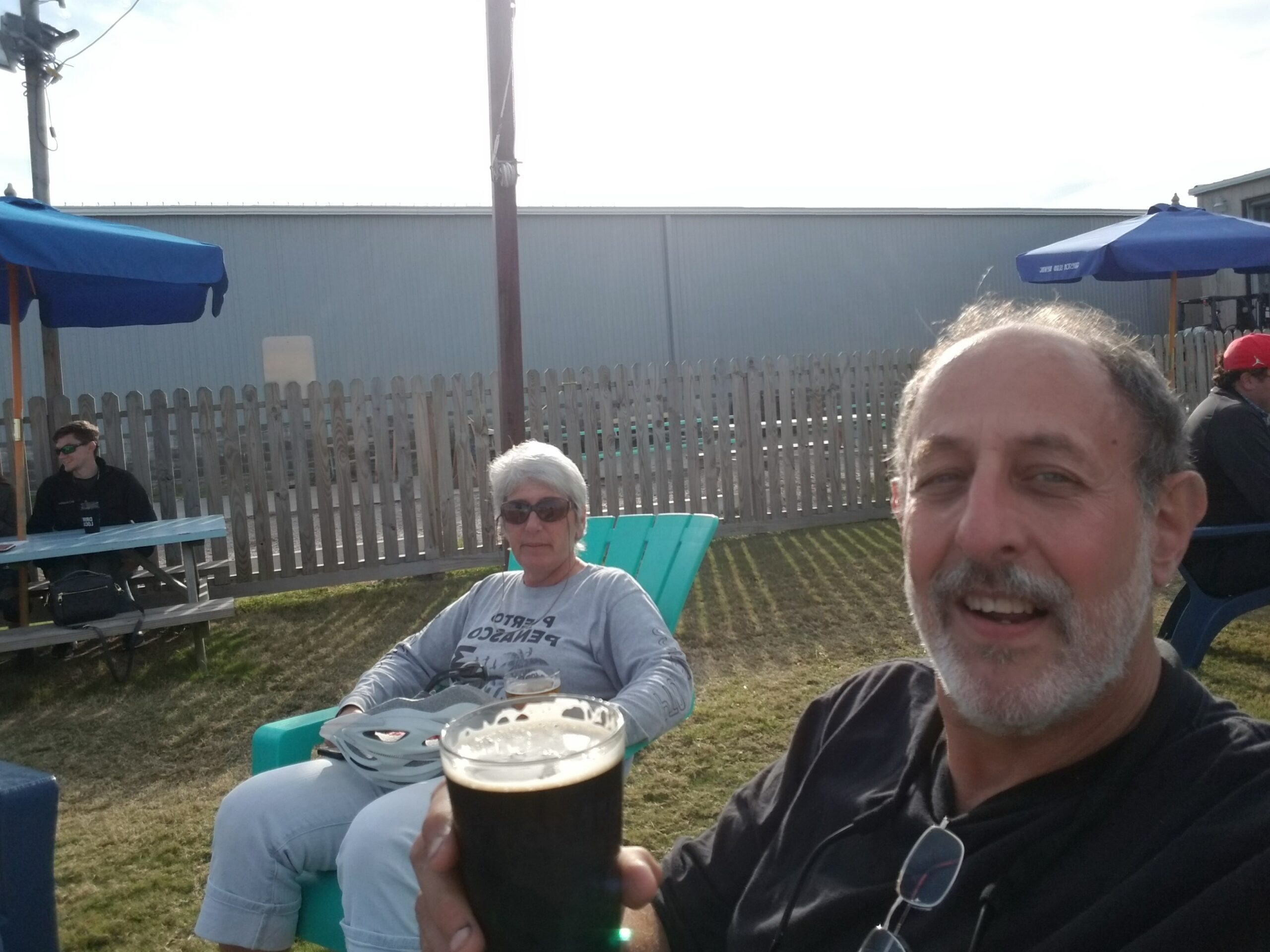 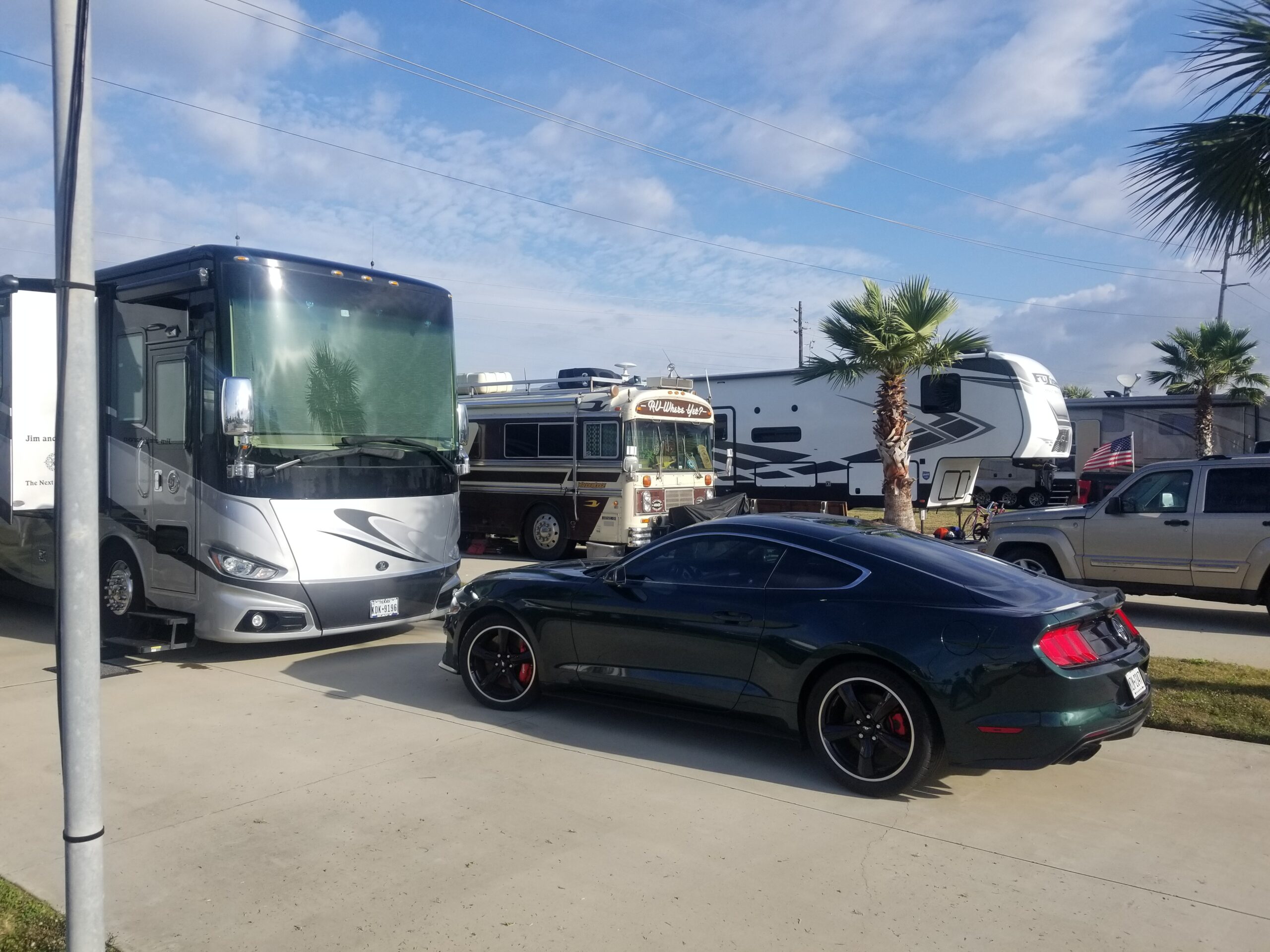 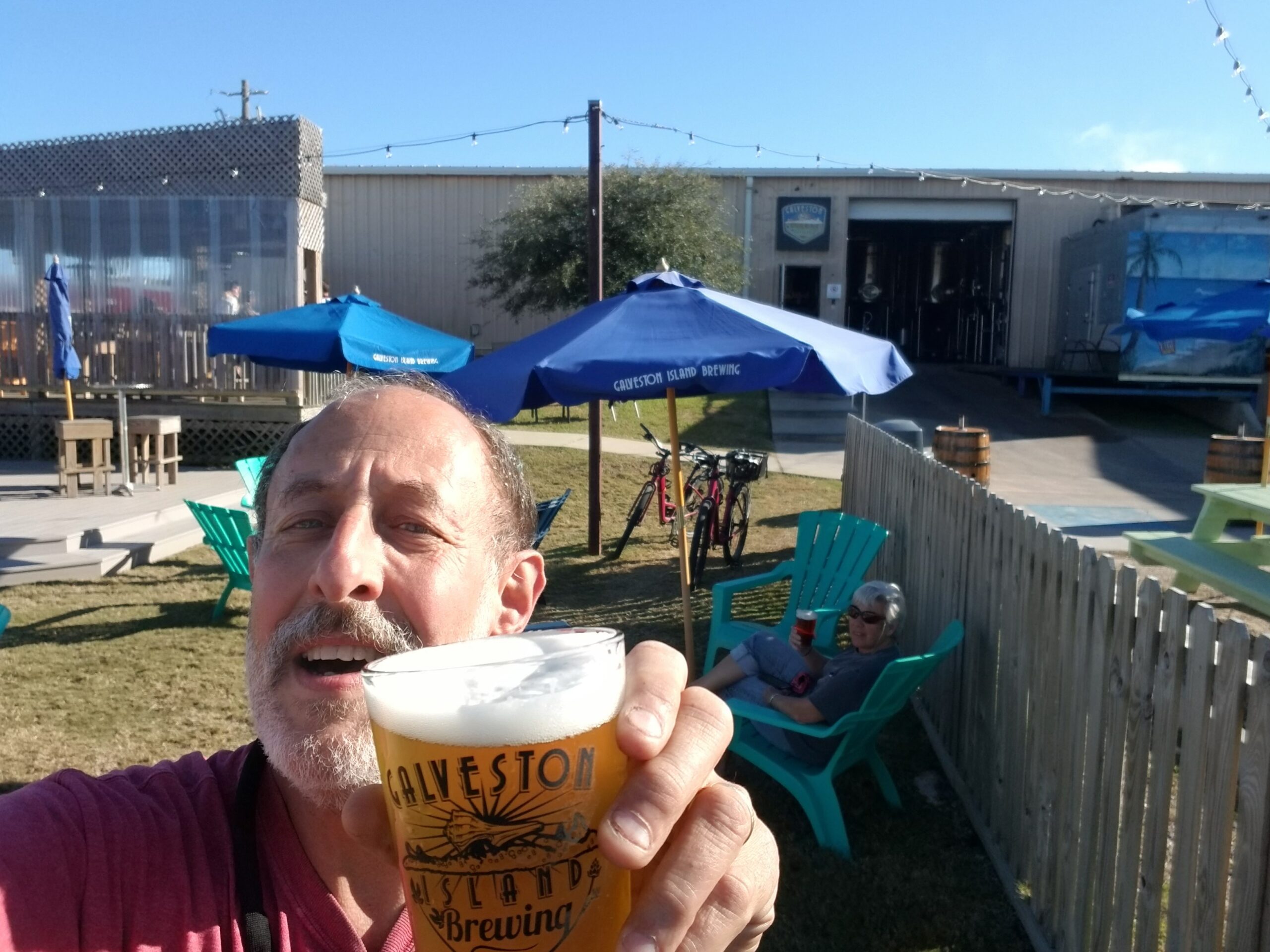 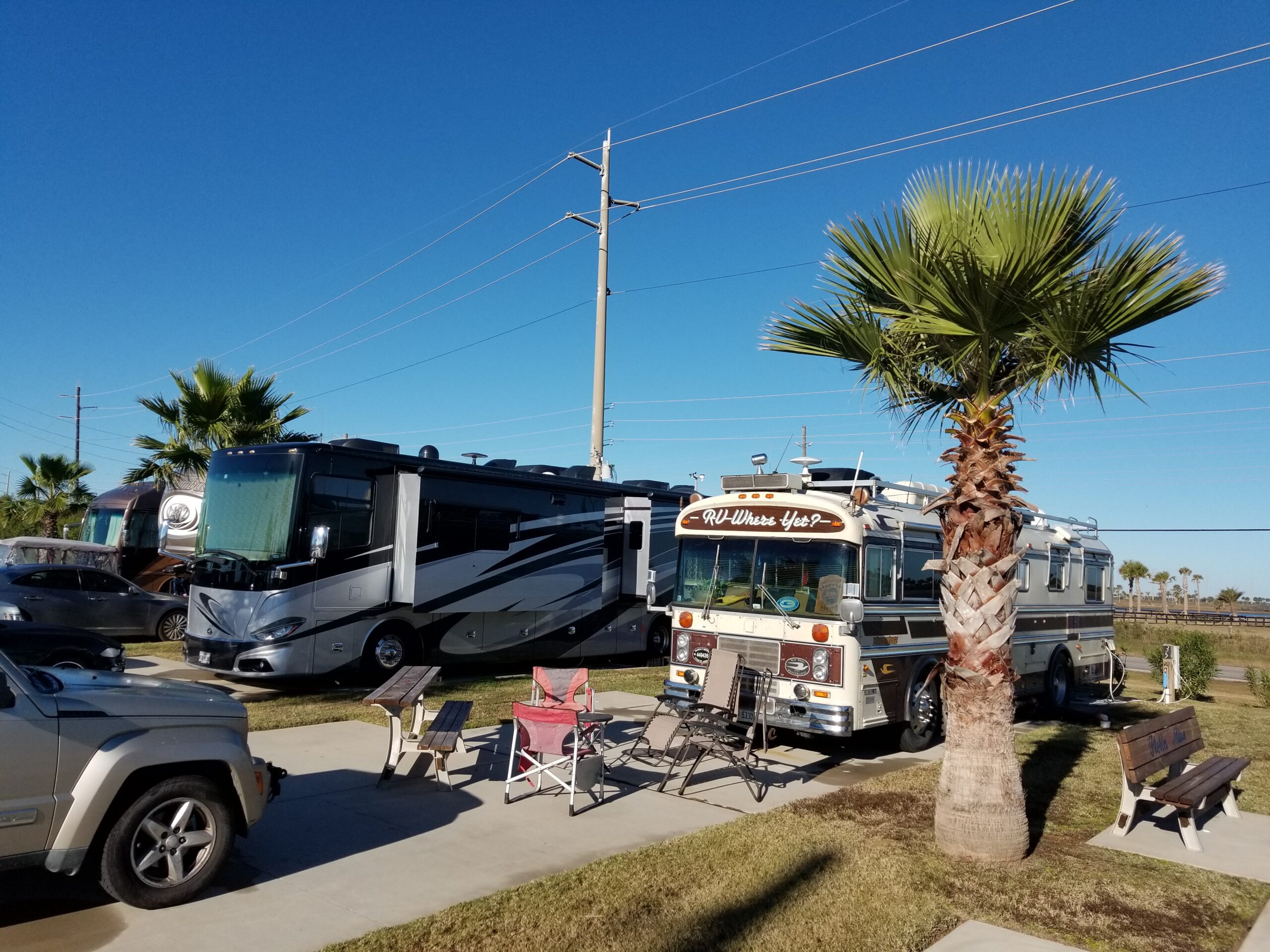 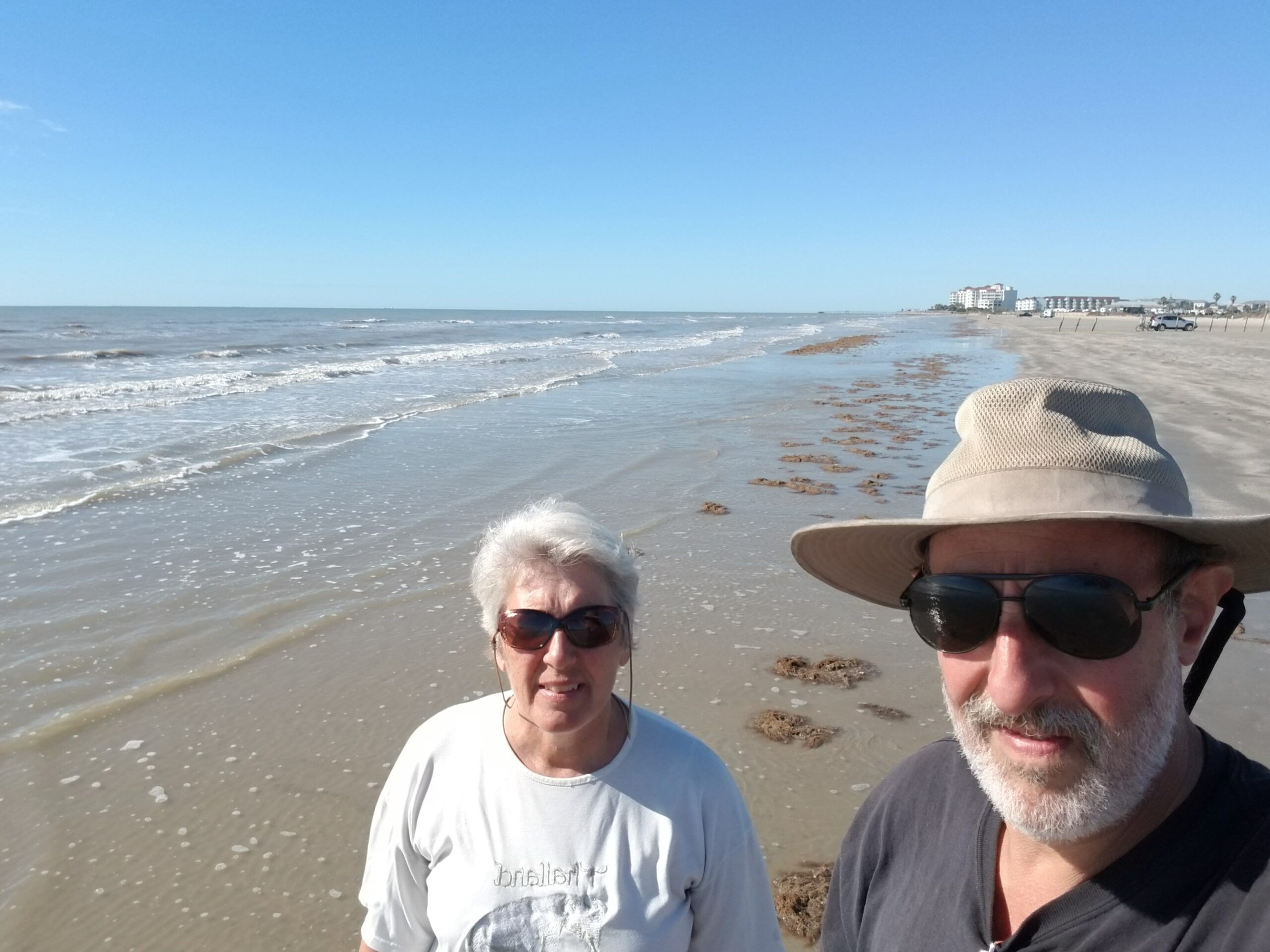 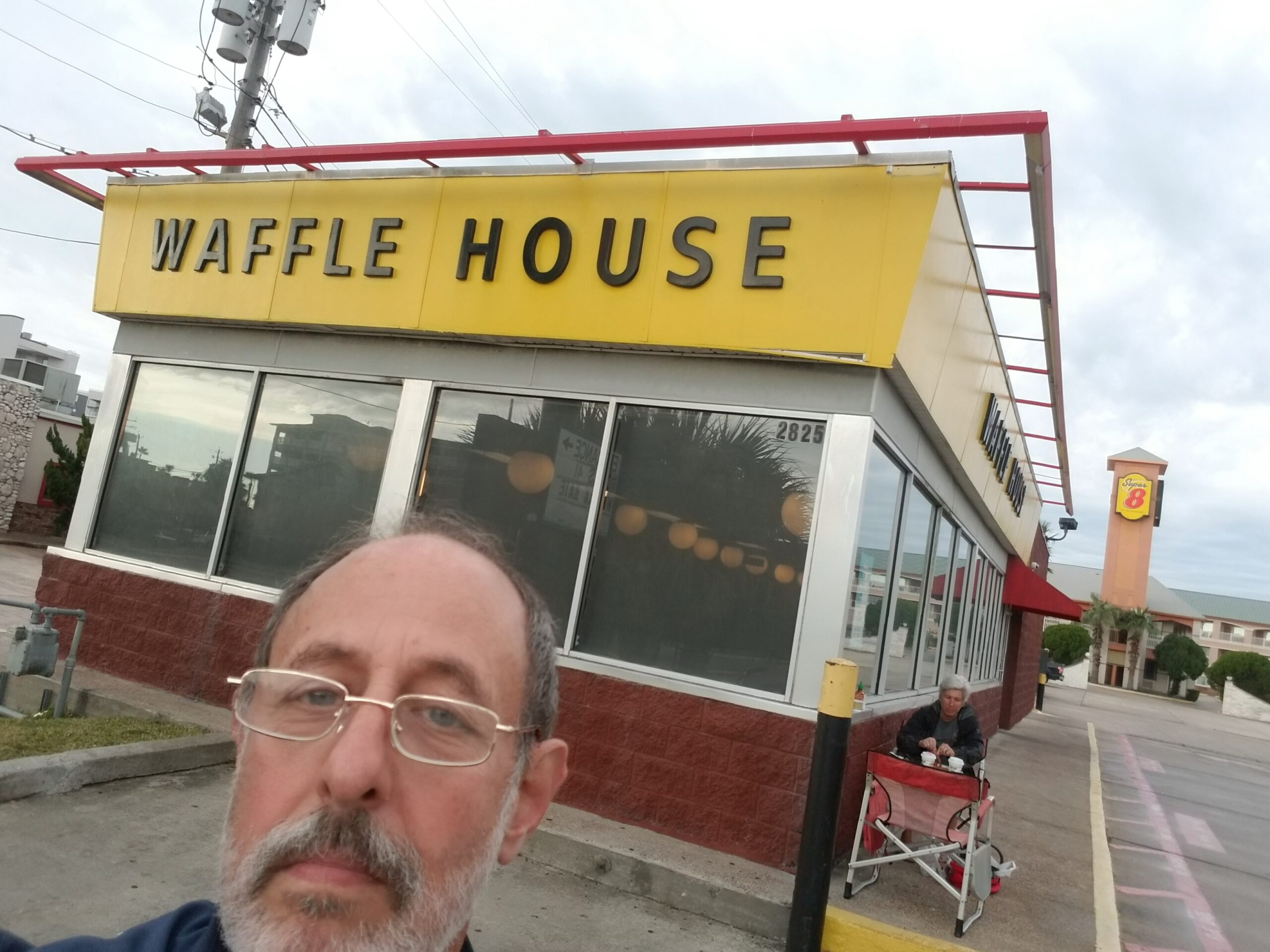 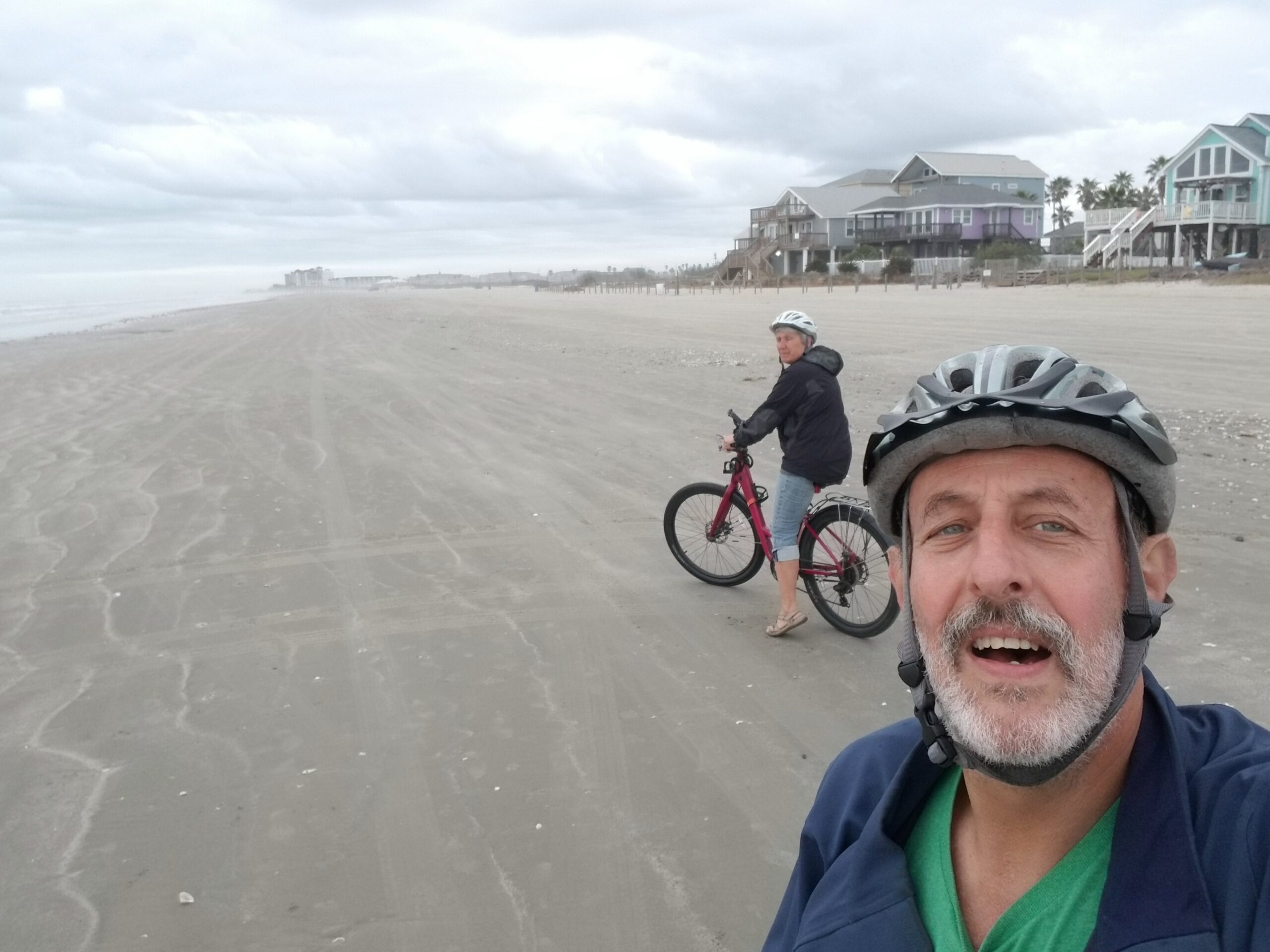 While in Galveston, we also needed to address some medical issues, and as if we needed it, got further schooled in the ABSOLUTE idiocy of our medical system(s). Not a political discussion here; just a couple of anecdotes to emphasize that we need our politicians to stop arguing and SOLVE THESE PROBLEMS so that we have a system that is NOT a first-world embarrassment.

As mentioned before, Liz was scheduled for her annual Mammogram and Oncologist visit. We thought we had it all sorted out; Liz obtained a CD with her previous mammograms from Illinois Masonic so they could be compared by the radiologist here. We verified that the report could be uploaded to her Oncologists for a Video Appointment. The prices was agreed, and reasonable. All seemed in order.

But, the day before, she got a call, saying the cost would be $242, which Liz would have to pay at her appointment!

The clerk put Liz on hold to talk to her manager…then came back and said Liz could pay whatever we could, and suggested “half” ($121). We agreed.

When she got there, the amount they asked for was $122.50, and Liz Was NOT going to argue about $1.50, even though this was $30 more than what we had been quoted. We actually (and, it turns out, naively) thought that was the end of the episode. We were WRONG. Because the day AFTER the mammogram, Liz was emailed a bill for AN ADDITIONAL $252. It seems the Radiologist Fee was not included in ANY of the previous negotiations and apparent mis-quotes.

In short, (though it’s not very short at all), we were quoted and billed 4 different amounts, the final total being over 3x what the initial quote was.  Let me make an analogy.

When you get there with your check for $12,100, they ask you for another $150, which you pay because arguing is just too frustrating. Then, they tell you that you will have to pay another $25,200 in order to have an engine in your car.

And, even though that seems like the end of the story, THERE’s MORE!!!! We had to pick up a prescription. The cost was $767 according to the slip on the bag at the pharmacy. I showed them my GOODRX Coupon, which anyone can download for almost any medication at no cost online (www.goodrx.com – no commissions paid, I PROMISE). They cheerfully looked it up, and the cost became $11.25. How many people pay the former? How many even know what they pay because “insurance covers it.” I am QUITE SURE no one lost money at $11.25 – so how can the $797 cost be explained or justified?

HOW CAN ANYONE DEFEND OUR CURRENT HEALTHCARE SYSTEM?  Or accept ANY excuses for why our elected representatives have not fixed it?

Driving home from Kelly and Buck’s Taco Extravaganza, I became aware of an issue with the Jeep that would prove to be a REAL aggravation. In addition to an ongoing issue with RV WHERE YET. You’ll have to read the next post to find out what happened!

4 thoughts on “Tacos and Mosquitos”

← Hunkering In Style! ← Mechanical Mayhem
Next Up

Our first couple weeks in Galveston were spent reacquainting ourselves with the area. We were here a couple years ago,…