This is why I leave gaps in any advance reservations we might make.

Heading eastward, we had a mixed bag of days where we have picked spots and made reservations interspersed with stretches where we have nothing planned. Our eventual destination will be Prince Edward Island, off the coast of New Brunswick/Nova Scotia. Along the way, our various Canadian friends strongly recommended that we visit the Gaspé peninsula. It was “on the way” for us (remember, we are the folks who went from Chicago to California via Georgia last year), so why not?

We chose to drive thru Québec along the coast road (132) vs. the Transcanada (hwy 20). 132 truly runs exactly along the coast…so much so that many sections have breakwaters and other construction to prevent damage from the ocean. And many sections NEED breakwaters, barricades from falling rock, etc. Some grades as much as 18% (up and down). Not a good road, transmission, brake or suspension-wise. Despite this, we apparently avoided creating an international incident or Road Rage on the mostly 2-lane roads without pullouts (15mph up hill); though who really knows for sure…the gestures and comments were all in French. Mostly accompanied by smiles, though.

As bad as the physical road was, it was a GREAT ROAD driving wise! You’d love it in a 2-seat sports car. We more than managed it in a 28,000lb bus. Lot’s of little towns, sparse agriculture, trees and SPECTACULAR vistas. Inexpensive RV Stopping points (even a terrific FREE one as described below).

Let me put this in perspective for all of our blog readers (all one of you…you know who you are!). We have driven or riden on some spectacular coastlines the world over; without putting them in any particular order:

Well, you get the idea. Some GREAT DRIVES. The coast of Québec along the St. Lawrence is every bit as SPECTACULAR as any of these. And we would have missed almost all of this had we taken the “Main” road. 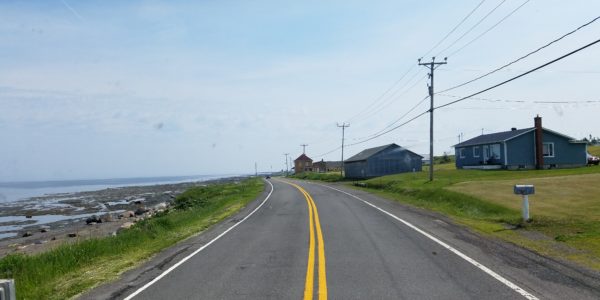 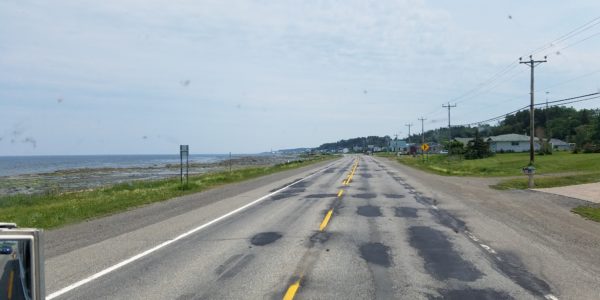 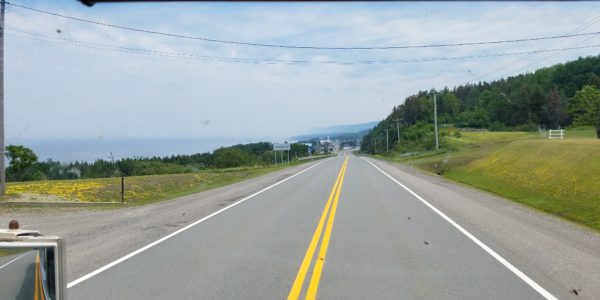 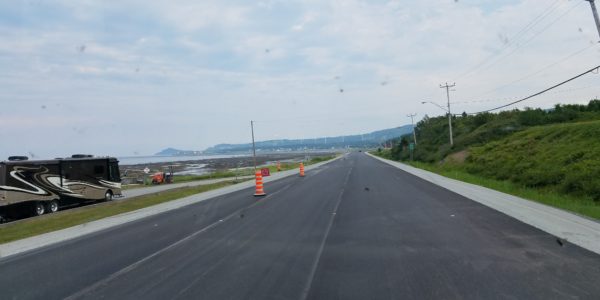 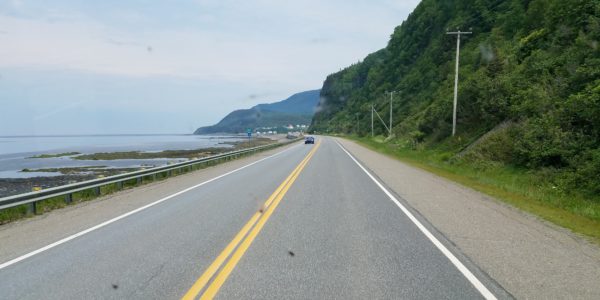 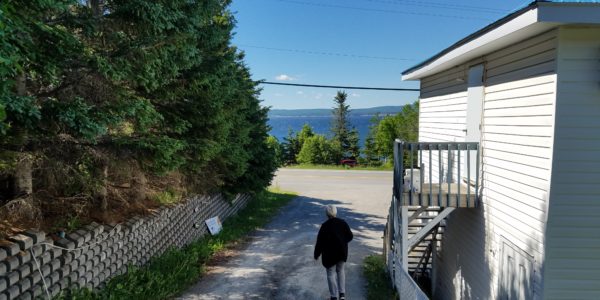 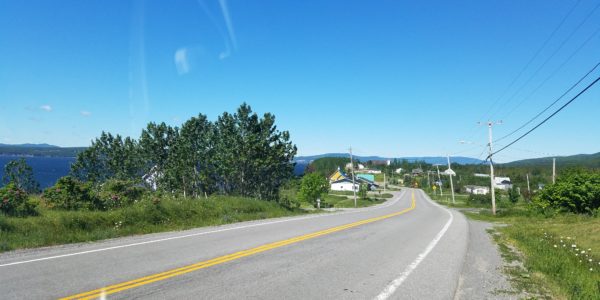 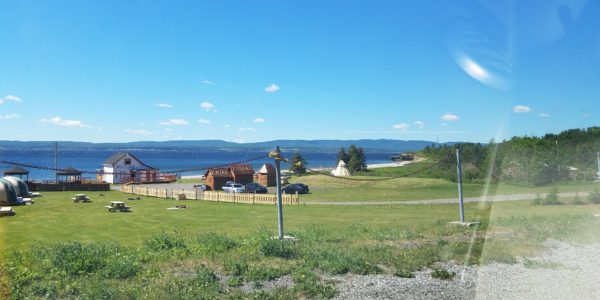 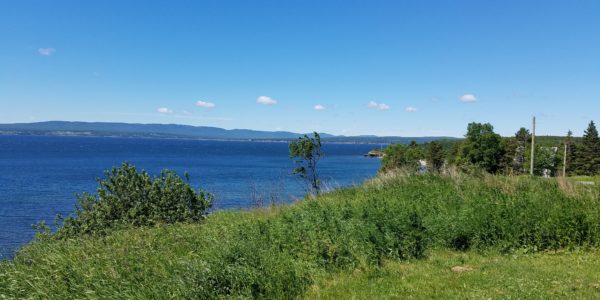 SO, what have we been up to? What are the details of our Travels? After leaving the Laurentians area and Havas hospitality, we headed east, through Québec City (Been there before), across the river on onwards to a town called “Montmagny.” Great RV Park, nice pool (weather still VERY hot), incredible sunset.

And amazing tides! The St. Lawrence acts like a funnel that enhances levels produced by a given flow, so the tides measured far up river are pretty substantial – 3-4 meters. Nothing like Bay of Fundy, which we shall see later this summer. But still, impressive….long flats at low tide completely disappear.

The next day we planned to continue Northeastward on the South Side of the St. Lawrence all the way to the very tip – Gaspé. Should take a day, but allowing much longer in order to stay on the local route.

Next stop, Pointe-au-Père, was mentioned in the App we use to find places…this was indicated as “OP” (which means in App-speak, “Overnight Parking, free”).

Usually that is a casino; so not our first option. But this was described as a municipal pier, next to a maritime museum. Just a level spot where dozens or more RVs park every night, according to the App. What’s not to like about a free spot next to a museum?

And Pointe-au-Père did NOT disappoint. The Maritime museum has a Canadian Submarine…have seen several subs over the years and did not feel the need to enter. But before this, did not know that Canada HAD submarines!

Also an operating lighthouse, with a lot of historical detail. And, the aforementioned pier – more of a spit of land – protruding into the St. Lawrence.

A SPECTACULAR spot for the evening!

In front of us on the pier was a young couple who were setting up their camping experience. Their domicile was their 4-door coupe. A small coupe. Liz and I watched in amazement as all the necessary accoutrements were disengorged from the vehicle…cookware, stove, food, a tent-like apparatus to attach to the side of the car, mosquito-netting for the windows; cardboard inserts for the windshield and hatch….when they were done, they had a small (VERY small) but fully functional place for the evening. In the morning, all of the above “stuff” was put away in tupperware tubs that stacked neatly in the back of the car. Behind us was an older couple (older than us, for sure) doing much the same from a small van.

I guess not UNLIKE our daily experience…ok VERY unlike our experience. I can’t say for sure that the second couple was actually older…I think a week of such camping would age me that way!

After Pointe-au-Père and another day of drop-dead-gorgeous scenic driving, we spent the night in Grande-Vallée. This was really just a stopping point along the road since our destination, Gaspé, was too far to reach on route 132 in one day. This turned out to be a VERY nice park, with really great view out to the Gulf of St. Laurence (now no longer a river) and a long beach for walking.

The weather at Grande-Vallée reminded me a little of Chicago. It was quite cool in the afternoon as the wind was strong off the water, which is the temp of the Atlantic Ocean – not frigid, but a dip would not be enjoyable.

Then the wind shifted offshore, and the temp was 20F warmer. Then there was a thunderstorm and the humidity plummeted. If it snowed the next day, the similarity to Chicago would be complete. (It did not).

We finally made it to Gaspé, where we planned to spend a few days. The RV spot was a little ways out of town, but an easy bike ride…if the spectacular hills weren’t so spectacular! Clown Car, baby!

The first thing we needed to do upon arriving was find a propane source to fill RV Where Yet’s tank. The fridge and stove sip propane, but it has been months and we did not want to run low out in the middle of nowhere. We had been looking…some RV Parks claim to have propane, but this seems to be mostly exchange cylinders.

Our lack of French makes simple questions hard…except that the Chinese or Vietnamese…not sure… clerk at the RV Park spoke English very well. She asked the park’s other employee (she said it was her first week on the job), and then translated back to us…the second gas station down the road sells propane.

Liz and I decided to take the Clown Car there first…easier to scope out access to the fill station. The Gas Station clerk (20-something) had no difficulty understanding me in general (amazing, since Liz has been trying for years!); especially the words “Propane” and “Motorhome.” He assured me they could fill, and just to be sure I walked the driveway to make sure the bus would make it. So we brought the bus back, and the clerk met us at the pump. I guessed 80L and explained it’s a little game I play. So he guessed 79. It was 81 Liters.

Camped at our Gaspé Base, we spent the first day on a hike at the Forillon National Park…all the way to “Lands End” which is the farthest east spit of land in Québec. The vistas on this walk were spectacular…bluer-than-blue water with White Horses (it was quite windy). Along the way, lots of Seals, Whales and Dolphins cavorting. 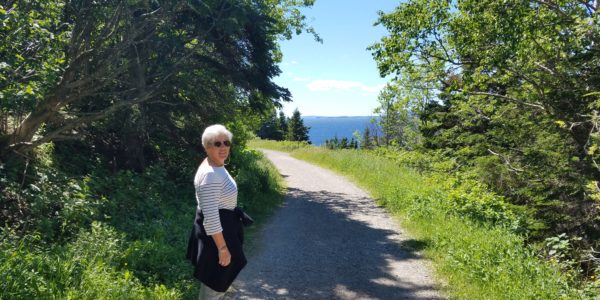 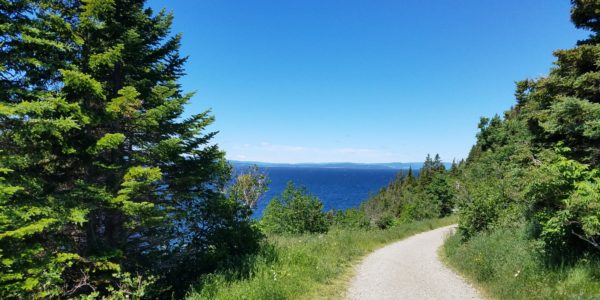 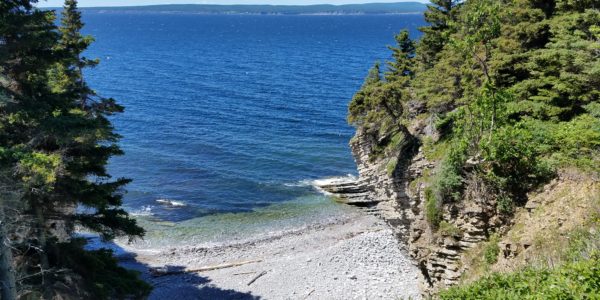 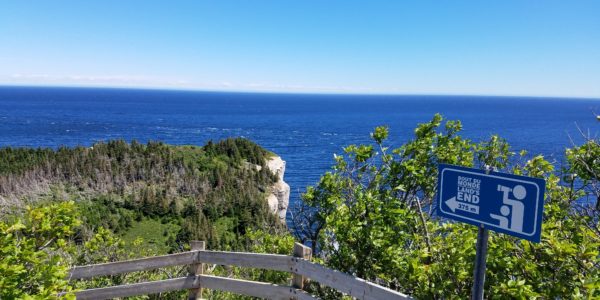 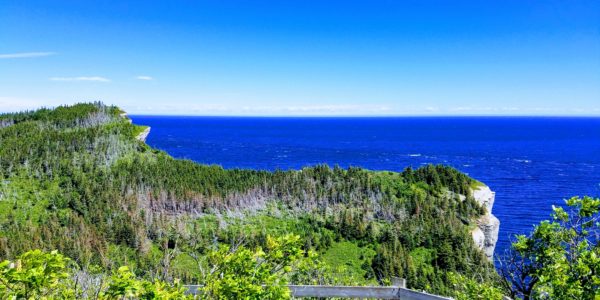 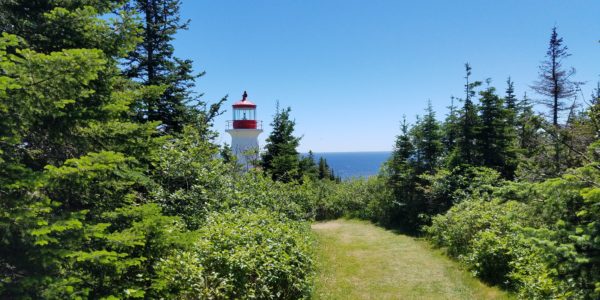 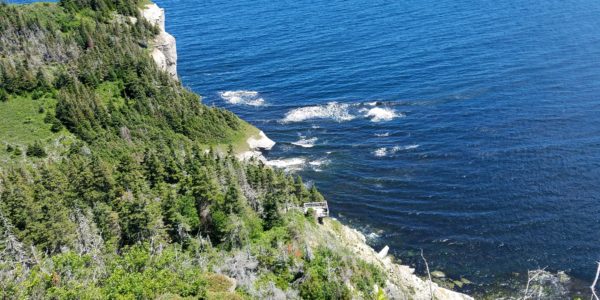 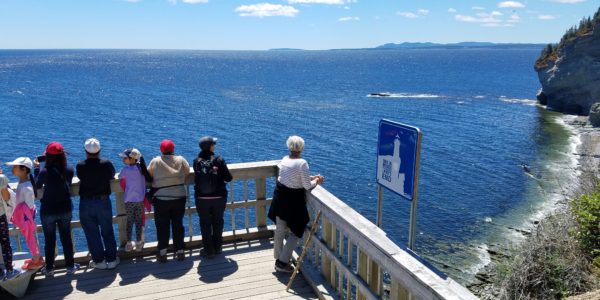 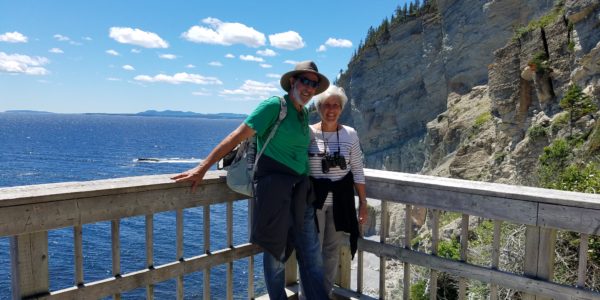 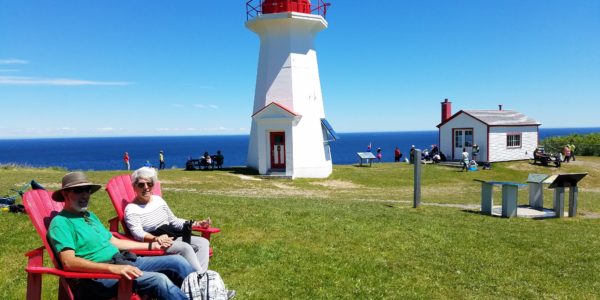 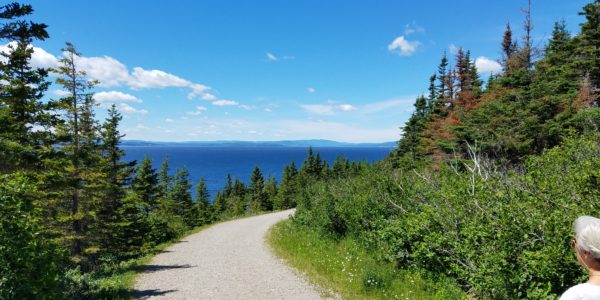 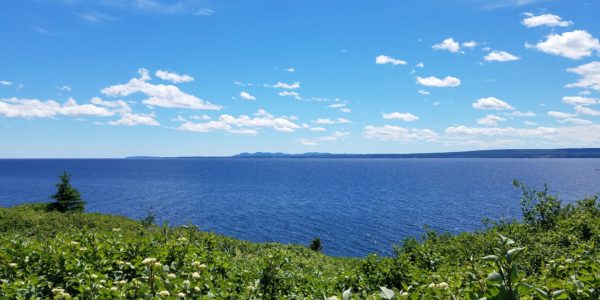 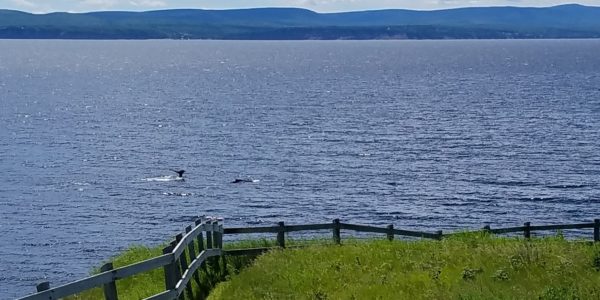 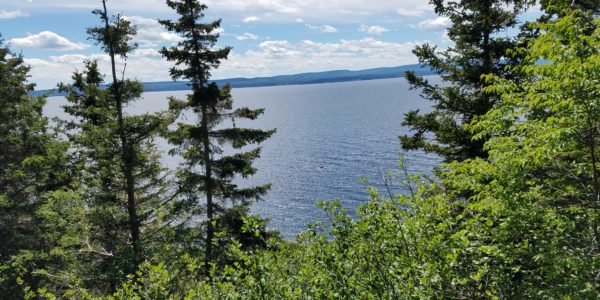 At the end of the day, we visited the Mussee Gaspese. There we learned about the fishing heritage in these parts…even walked through a restored Gaspesienne, which is what they call a certain style of fishing boat that was used in the mid-1900s. And finally, we had a seafood dinner with the pièce de résistance: the Shrimp Poutine!

The next day we drove down to Percé, which has a famous Rock. Yep. A Rock. It sits out in the water, and you can walk to it at certain times of the day.

And if you are a stupid tourist, you could get stranded there, which no doubt entertains the Québecois.

Liz and I consulted the Tide Tables and made SURE our hike was squarely timed for Low tide.

We also enjoyed a beer and a home-produced ice cream.

We actually have had one issue with our travels in Québec in particular. It’s the FRENCH thing. They proudly speak it here, and we don’t. English is far less prevalent than one would think…to be honest, we had an easier time in France!

Joe Havas’ son said in many cases people DO speak English, they just won’t. I am not ready to be so cynical.  We always managed…usually by finding a youngster (i.e less than 40) or immigrant (i.e Chinese, Hispanic or just about anything, really). These folks usually spoke enough English. And eventually, almost everyone else shifted into at least halting English, with a smile and an apology (“Sorry My English is not so good…”).

TO which I respond: “WAY better than my French!”

So it is not an irreconcilable issue, and I think if we come back to Québec we’ll manage to add at least a little French to our repertoire.

← Enjoying Québec and Québécois ← CFAs, heading east to PEI!
Next Up