Getting to Cape Breton was an easy and VERY SCENIC drive. Nova Scotia is an AWESOME place. Small towns. Coastal Vistas. Pine Forests. Really great for a slow drive with no place to be in particular.

But, we DID have a place to be: The Cape Breton Highlands National Park, which sits like a bullseye in the middle of a famous scenic drive: the Cabot Trail. The “Cabot” in “Cabot Trail” refers to John Cabot (AKA Giovanni Cabot0 — he WAS from Venice,  so it seems like this should be the primary?) who landed in Newfoundland first,  but explored Nova Scotia in the late 1400s.

There are a lot of ways to “do” Cape Breton and the Cabot Trail. Many people bike and camp, but it is WAY TOO HILLY for that (IMHO). There are lots of motorcycles… more practical, but it rains a lot,  and that does NOT look like fun. Our choice — Clown Car!  Best of all! We parked RV WHERE YET in the National park Campground and used this as a base. We drove somewhere everyday, either in the park or near it, based on recommendations of people we met. Some of the things we did:

♦ 3 Mile hike along and through an old growth hardwood forest.

♦ Similar hike along the seaside cliffs on a pretty easy trail. Every now and then there would be a group of people pointing off into to brush at moose, chilling for the day.  We called these “Moose Jams” (the closest thing to a traffic jam in these parts).

There are SO MANY MOOSE in Cape Breton National Park that the fence areas to keep moose OUT — so that the forest has a CHANCE to propagate. Moose eat EVERYTHING,  but especially tender young Spruce Trees.  A ranger told us that the moose population had been hunted near to disappearing,  but they were re-introduced to the park years ago. Problem is, a Western Moose (much larger) was selected,  and thus there are too many too big animals in the park.

♦ Drive to the farthest northern point of Cape Breton to a place called “Meat Cove.” This is a small fishing village with reputedly great Seafood Chowder  place.

Cannot speak to the latter (timing being everything) as the restaurant was CLOSED the day we drove up there. But there was a really nice Whale Interpretive center with lots of information.

♦ One day (a rainy one) we took a break from all the scenery and did Laundry. And went to a local pub for an awesome dinner with live music.  The local economy is heavily oriented towards eco-tourism…and Lobster and Crab fishing.  So the local restaurants have plenty of both!

Each day’s drive offered scenic overlooks that cannot be adequately described. Except for the one rainy day, the weather was spectacular to match. Altogether, over 4 days, we drove almost 600 miles and hiked about 25 miles! 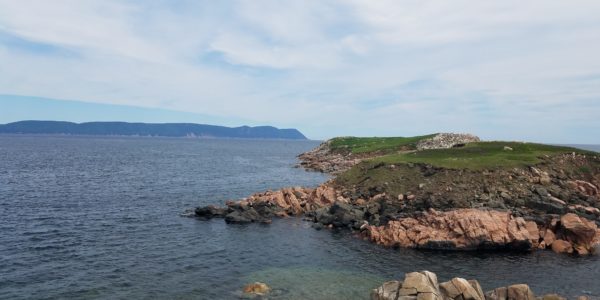 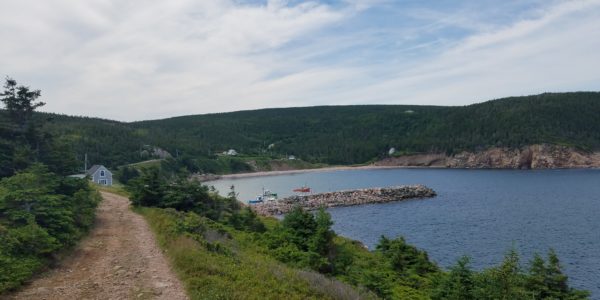 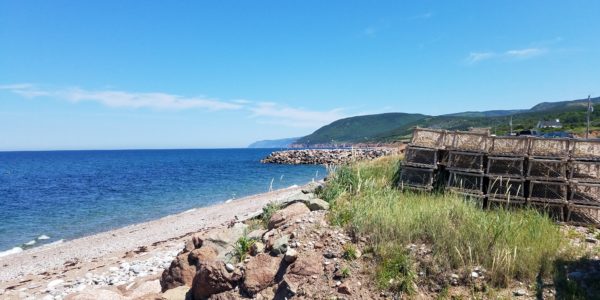 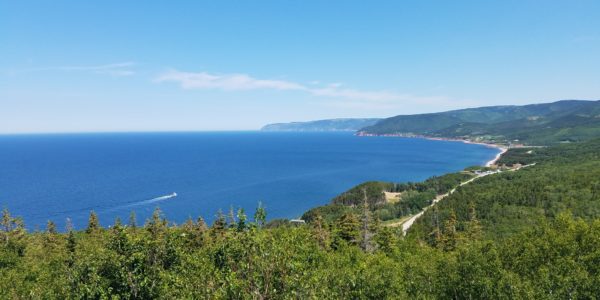 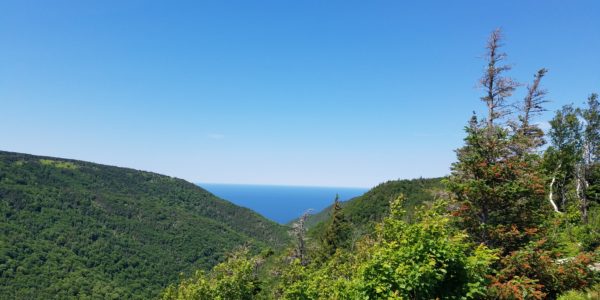 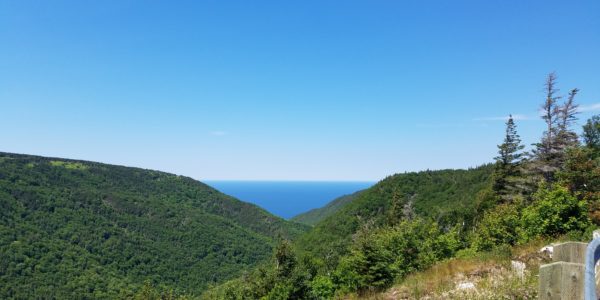 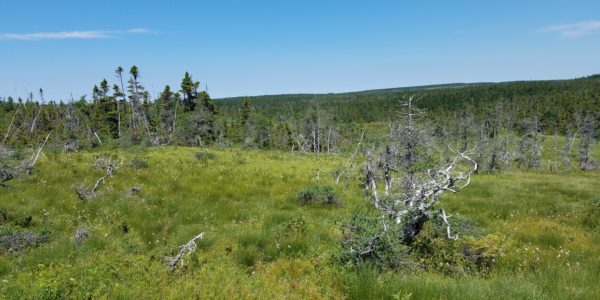 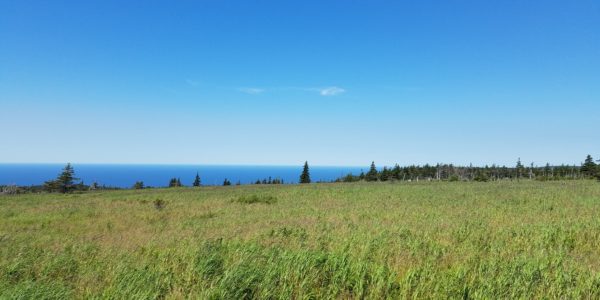 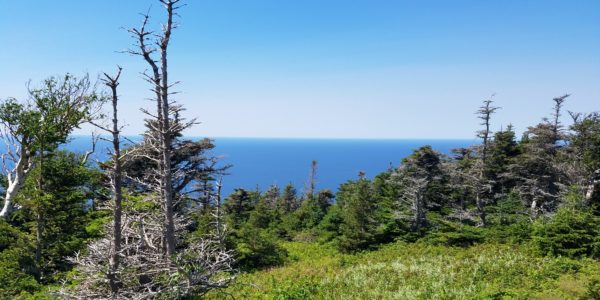 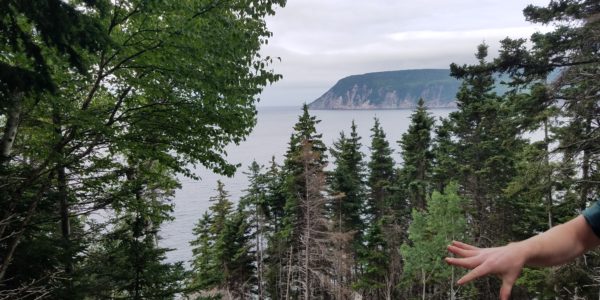 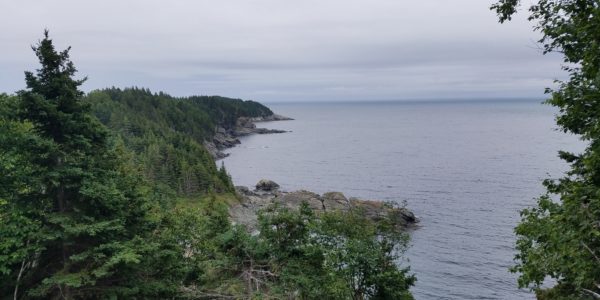 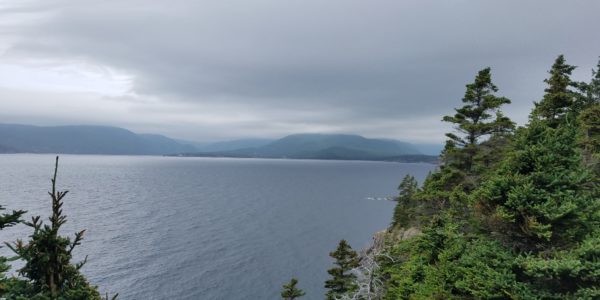 One day we visited the town of Braddeck. Here we discovered a museum dedicated to Alexander Graham Bell. This was a revelation…I had no idea that he chose to live in Braddeck, Nova Scotia (for the scenery and the salt air) or that he had such a diverse portfolio of interest!   Of course, everyone associates him with the invention of the telephone…from which he made his fortune. But he spent a lot of said fortune on other things you would not realize.

There, for example, he studied, built, tested and tried to commercialize HYDROFOIL Watercraft (he called them Hydrophones). These boats used wings that lifted the bulk of the boat up out of the water to reduce drag and improve performance. Boats of his design held speed records for a long time; but he could never get a big military contract after a few false starts. If you look not too long or too far,  your will see many examples of hydrofoil-designs on boats — from fast ferries to America’s Cup racers.

He also built the first aircraft flown in Canada (in 1909). Designed and built man-carrying, massive kites of a tetrahedral design. And spent a LOT of time and energy on projects to help the Deaf (his Wife was). We left Braddeck very happy for the time spent on this random stop.

Driving the Bus up the winding hills of Cape Breton, you can image we were NOT the Hare.

The last day on Cape Breton, we packed up and left the campground for the Ferry to Newfoundland.   Along the way, we participated in a wonderful live version of the Tortoise and Hare Parable.

It seems some folks enjoy bringing their Super Cars (Lamborghinis, Ferrari, Viper, Corvette, etc, etc) to the Cabot Trail. They then drive at MANIAC speeds on the same roads we were trying hard to navigate at 15mph (at times). It was occasionally downright scary…plodding along when suddenly 3 of these cars SCREAM by, passing just before a curve, the edge of which is a precipice into the ocean. A few minutes later, 3 or 4 more would scream by.

A LOT of testosterone in addition to gasoline fueling these exploits.

Not guns drawn, probably, as this is Canada.

Well, it took us a couple hours to wind our way out of the park, and just as we were turning onto the highway from the end of the Cabot Trail, there is a parking lot full of super cars and cops. The latter with lights ablaze.

So, just as in the parable, the Tortoise plods along and finished FIRST. The Hare(s), in this case an EXPENSIVE last. I assume expensive, because we see signs all over Canada that say “50kph over…lose your car AND your license ON THE SPOT.” These guys were WAY OVER 50Kph over.

Speaking of the ferry, there are two ferry options to Newfoundland. One takes about 7 hours-ish and goes to the Southwest Corner of NF. The other is 17 hours, and goes all the way to the eastern tip of the island…near St. Johns. MANY people do the short ferry twice…and drive an arc across NF. The problem is, there is basically one road, so you have to drive over and back across the same route. We decided to take the LONG ferry to the far eastern end of the arc, then use our time to drive more slowly, with more stops, to the western end of the arc. After all, we have FLOWN to New Zealand from Chicago (24 hours with one stop). How bad can a 17 hour ferry be?

Well, let’s just say it was an adventure, but a GOOD adventure.

First of all, the overnight crossing was VERY SMOOTH. As someone prone to motion sickness, this was pretty important…this CAN BE extremely rough. I loaded up on Gravol/Dramamine which helped me sleep but was not necessary for its intended purpose. Also, the boat is BIG and there are lots of chairs and lounge areas. There were not that many people, so Liz and I both got a couch-ish thing in the lounge where we could actually lie down and sleep.

In the evening, the lounge had live music…it was DELIGHTFUL. The Bartender (a Newfoundlander named Darlene…we were QUICKLY on a first name basis) was very helpful when I asked if there was a local beer I should try.  She said, “Black Horse is it!!! It’s the one ALL Newfies start with when they sneak off into the woods at the age of 12 for their first…and its actually not bad!” So of course, this is what I did!

It came in a can and she asked if I wanted a glass. I asked if she had used a glass back when she was in the woods at 12. She said she can’t remember, but didn’t think so. So I said I will just take the can!!!! And it was not bad!

Things got a little shakey after the music stopped and everyone started to settle down for a few hours of sleep. It seems that most people on this particular ferry needed, but left at home their C-PAP machines. The snoring festival was discordant and extreme!!!

But at some point, one is just too tired (and full of Gravol) to care!

← Do Things Really Happen for a Reason… ← Amazing NewfoundLAND!!!!
Next Up

First, let me say that St. John ROCKS. What a great town, with so much to do and recommend it.…

Do Things Really Happen for a Reason…

Up until retiring  I would have answered, “Yes, things DO happen for a DEFINITE reason.” Because when computers screw up, …