Wiseman (and getting there) was ALL THAT AND MORE. “That” being the farthest North Point we are ever likely to reach in our lifetimes. “More” being, well, read on!

First of all, with the road and the construction on said road, the travel time was more like 8 hours each way; lots of dirt and mud, but the dirt and mud was actually preferable to the few spots that had been paved, and were replete with MAJOR frost heaves and potholes.

But, we do NOT regret in the slightest risking 16 hours driving North to the northernmost point we shall reach this summer (and perhaps ever!) and then back.

First and foremost, the scenery was MAGNIFICENT, including lots of Moose and our first Grizzly Bear.   We did NOT need either of our spare tires, and the Truck Drivers on the CB Radio were soft-spoken and polite — a DISTINCT DIFFERENCE from the conversation on CB in the lower 48, which could make a sailor blush! We DID get a major Rock Chip in the windshield, which shall certainly eventually evolve into a crack. I have a kit to try to repair it, but more importantly, we have a $0 Deductible on Glass Repair!   We shall do so when we return to the states!

We DID take the obligatory photo of the sign marking the actual Arctic Circle. This was, possibly, more memorable for us than most because of Sheila.

Sheila was a BLM Volunteer, who mans the wayside and gives tourists their Arctic Circle Certificates (and takes their Pics with the sign). She asked how far we were going on the Dalton, and we said, “Wiseman.” Her eyes LIT UP. She said, “I have a book for a fella there named Clutch; would we be willing to deliver it?”

I said “OF COURSE WE WOULD,” never doubting for a moment we’d be able to find “Clutch” in a town inhabited by 7 people!   We also had a bag of Coffee to deliver to a fella in Wiseman named “Jack” for our friend Peggy. Peggy lived in Brazil for a long time, and she gets shipments of the “good stuff” from there.   Jack apparently enjoys Brazilian Coffee!

Long story short, we did find Jack, but not Clutch. We found Clutch’s house, which Sheila had described as Green and across from a yard full of of rusted old mining and other equipment – a museum of sorts. Clutch apparently makes the BEST sourdough pancakes, and there would be a sign on the green shack saying so. Unfortunately, there was also a sign that said “Gone for supplies, back soon.”

We were going to come back later, but Jack said “Don’t bother.” Clutch has gone TO FAIRBANKS (7 hours away) for supplies and since he left today – Jack said he would be SHOCKED if he would be back for a week! Jack said just to put the book between the screen and front door of Clutch’s shack. DONE! 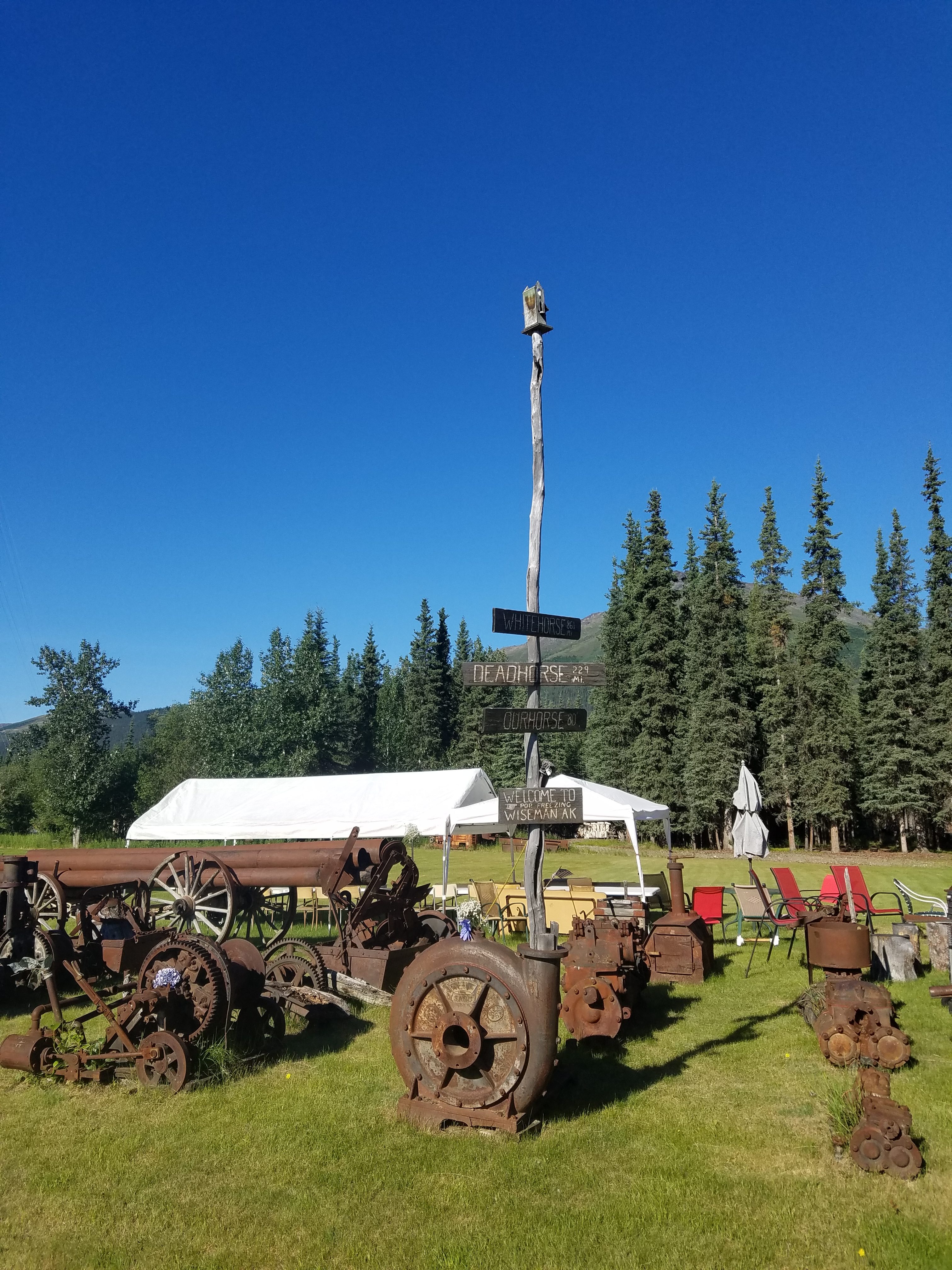 The B&B (“Arctic Getaway, in case you are ever in the area ) was just as charming as promised. Our cottage was super-comfortable, and breakfast was absolutely delicious. There were a pack of Sled Dogs in the yard on summer vacation – which means they lay around, eat, howl at the moon and generally await their true purpose – pulling a sled at -40F.

Speaking of Winter, it was also SNOWING in Wiseman. Not the arctic kind – the kind that is Cottonwood Seeds. An ABSOLUTE BLIZZARD, through the air and covering the ground. More than just annoying – so many that Liz chose to wear the mosquito net over her head to avoid breathing in the seeds.

Uta said the stuff is SUPER flammable. Indeed, the town of Wiseman almost burned down recently due to the stuff, which burns in a flash and when it covers everything in drifts can become a major conflagration in an instant!

Driving along the Dalton Highway, several important things happen to and around us.   The Tundra is really interesting to see. Scrubby trees, lots of little ponds (breeding places upon Breakup of the legendary Alaskan Mosquitos – MILLIONS of them!!).   Maybe the MOST interesting…the Alaska Pipeline follows the Dalton Highway, which was basically built to construct it, for about 800 miles!

The Pipeline really should be considered the 8th wonder of the world, from an engineering standpoint. Building a pipe that was to be full of heated oil on top of Permafrost and in areas where earthquakes are not only possible but FREQUENT required some VERY specialized and robust solutions. The Pipe is insulated inside a jacket, and EVERY SUPPORT PYLON has radiator fins on it and Ammonia in it – these to conduct and radiate any heat that DOES escape harmlessly upwards, and not in the direction of the permafrost. The Pipe itself floats freely inside that jacket which is connected to the pylons in case of earthquake, and zig-zags across the tundra so as to minimize the displacement from temperature changes. Remember, the ambient Temp can range from 95F in summer to -70F in winter!!!!

In addition to the engineering, a project of this magnitude, it seems, was rife with Graft, corruption, largesse, cost over-runs, etc…the stuff legends AND fortunes are made of. The book that Sheila asked us to deliver to Clutch was a series of stories, written by a Journalist, about the human aspect of the Project. Everything from the labor-force inefficiencies to the food service to the politics. Since Clutch was NOT home, I took the chance to read this book before depositing it inside his screen door. Fascinating depth added to the engineering wonderment.

One thing is clear: despite the HUGE overruns, due at least in part to the corruption and inefficiencies, the Pipeline has been a huge economic success and boon to Alaska. Though one can still argue about the environmental impact (and constant vigilance is STILL important), to US, and from a distance, we did not see huge scars or puddles of oil. And by sheer numbers, there are more Caribou now than there were before construction, even though these fragile animals were supposed to be hardest hit.

Steve and Kathy are still waiting for us to exhibit “Southern Gentility,” which may be the ultimate measure of “Southernness.”

From now on, we start heading South. Mind you, still pretty far north, but south of here!   It is weird being considered “Southerners” since hail from Chicago.   People up here don’t see a substantive difference, other than dialect, between “You Southerners from Chicago” and the Enfingers, Southerners from Florida by way of Tennessee that we are travelling with.

Even folks from Anchorage are considered Southerners.   Someone at Chickenstock said that Anchorage is quite convenient to visit — only an Hour from Alaska… The clear implication is that the “Big City” (Anchorage has fully ½ of Alaska’s total population!) does not represent or resemble Alaska in any way. We shall see when we get there!

But before heading South, we chose to make a second brief stopover in the Fairbanks area…

← Everyone needs a Secret (Fairbanks) Weapon! ← A Second Helping of Fairbanks
Next Up

A Second Helping of Fairbanks

Like an ALL YOU CAN EAT Buffet, Fairbanks (and North Pole) get a second shot at the pages in this…

Everyone needs a Secret (Fairbanks) Weapon!

Click Here for Liz's Thot of the Day We moved onwards from Chicken, with our first destination being Tok. There,…